A: Where’s my newsletter who?

Q: Sebring is this coming week and we haven’t heard a peep about Road America. That’s where’s my newsletter who.

A: Yeah, sorry about that. Life has been kind of hectic. And I don’t have a lot of material to work with. But here’s an arbitrary picture of our car taken by Halston at Road America last month, selected for no particular reason whatsoever. 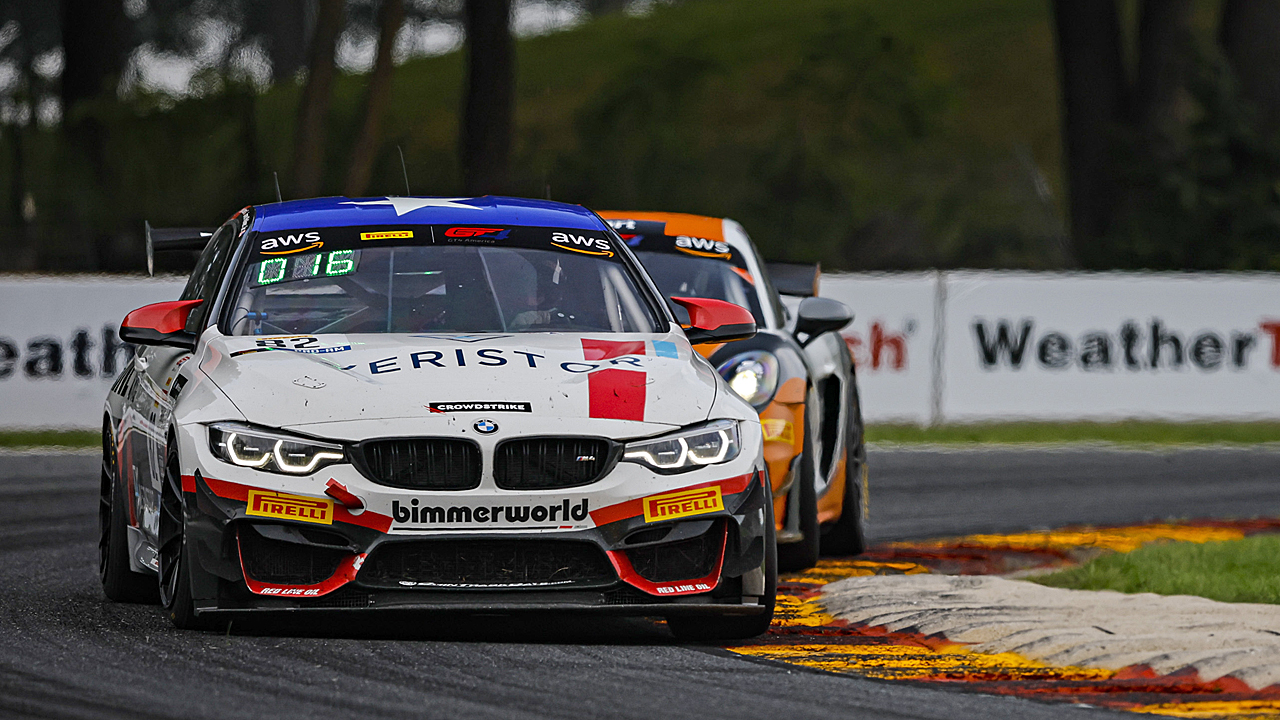 This is a random picture of Devin in front of what appears to be Matt Travis.

A: No, not even close. We once again struggled to even make the show. Not even having Tom riding along with us this weekend could change our fortunes. 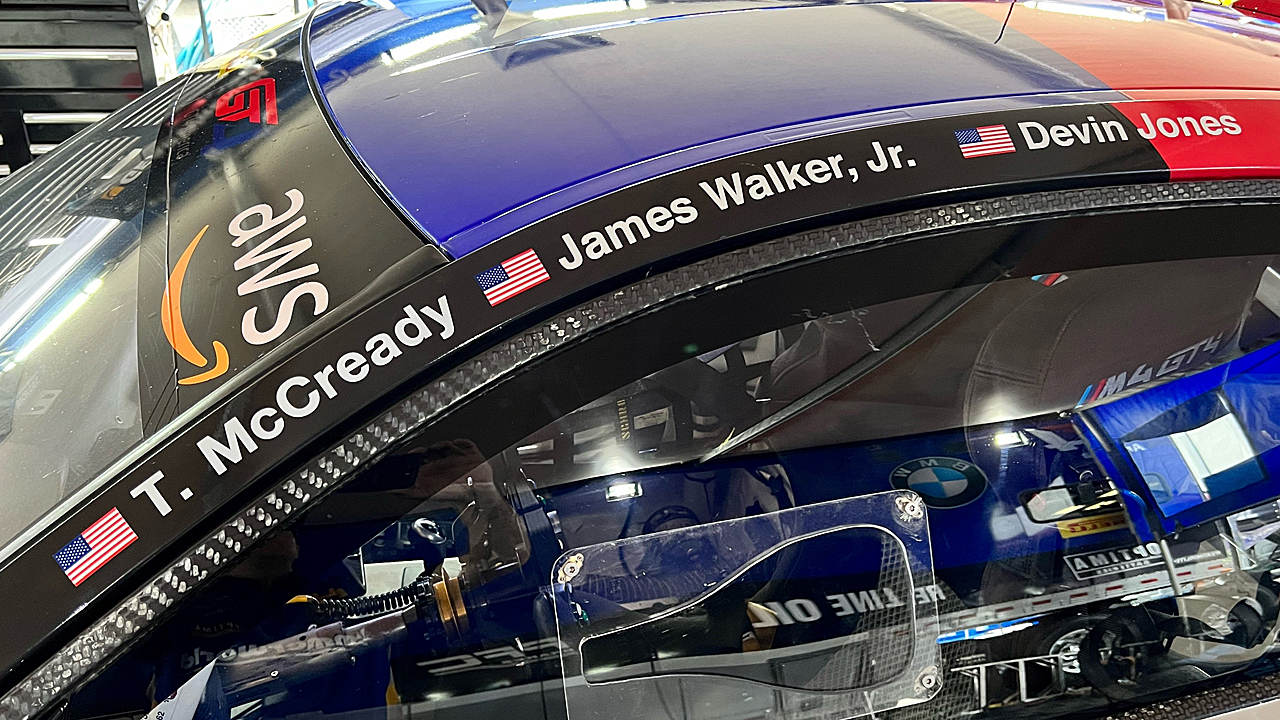 Well, that didn’t work. But it felt like the right thing to do.

Q: Let’s just cut to the chase since you are busy preparing for Sebring. Did you qualify well?

A: Sort of. For the fifth straight time this season I did set a personal best on Saturday morning, but I should have been even faster yet. After a miscue in the Carousel on my fast lap that cost me about 0.8 second (that’s a LOT, by the way), my 2:19.4 was only good enough for 12th in class, 22nd overall. Minus the bobble in the Carousel, we were legitimately a top-five Pro/Am car, but there are no mulligans out here.

Q: How about practice? Did you at least have a good practice session?

A: Negative. But let’s pivot to discuss cheese curds.

A: That’s my understanding, but I am clearly not an expert in the field. I know enough to ask if they “squeak” or not before ordering, but that’s about it.

Q: So you’re a fan of cheese curds?

When we sat down to dinner on Saturday night, long-time friend and scR fanboy Jim Emerson (of Pagid North America or something like that) requested two orders of cheese curds for the table. Now, you need to understand that James Walker has a relatively long, and specific, list of things-I-am-not-allergic-to-but-will-not-eat. Take the common banana, for example. In none of its traditional forms will a banana be found inside my sphere of consumability.

Q: I have no idea what you just said. What is this “sphere of consumability” thing?

Unlike the common banana that I avoid at all costs, cheese is one of those items that I generally shy away from. This phenomenon pre-existed the fact that in 2017 I crashed the Ferrari into a Sargento Cheese sign at Road America in Turn 6 (grumble, grumble), but there are special conditions under which I may allow cheese into my sphere of consumability, or where I may otherwise find cheese an acceptable form of dietary dairy augmentation. 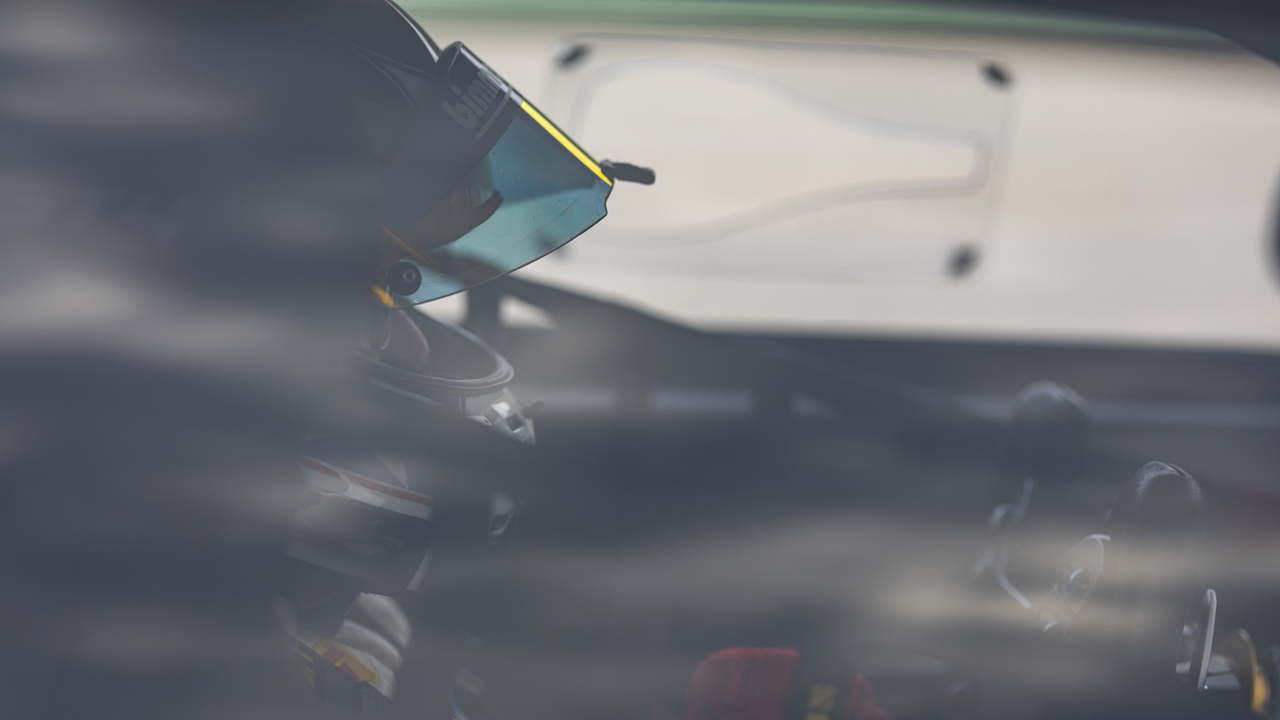 Here I am on the false grid contemplating life’s mysteries. And cheese curds.

Q: I’m really struggling to keep up with this.

A: For example, cheese on pizza is totally cool, but don’t make it one of those gross four-cheese pizzas. That’s a bridge too far. A cheeseburger is way out of bounds, but a sprinkling of Parmesan on a proper Italian dish makes perfect sense to me. Cream cheese? First of all, it’s not real cheese and second of all, no thank you.

Notably, the way cheese is recklessly and indiscriminately dumped by the handful on burritos, chimichangas, and things of that nature makes ordering them unfathomable. This is likely the reason that Mr. Clay insists on dragging me to a Mexican joint in every city we frequent. Usually multiple times.

Finally, mozzarella sticks, you ask? Those I will enjoy all day long, assuming that they’re not from Sargento. I am still bitter about that Turn 6 incident. 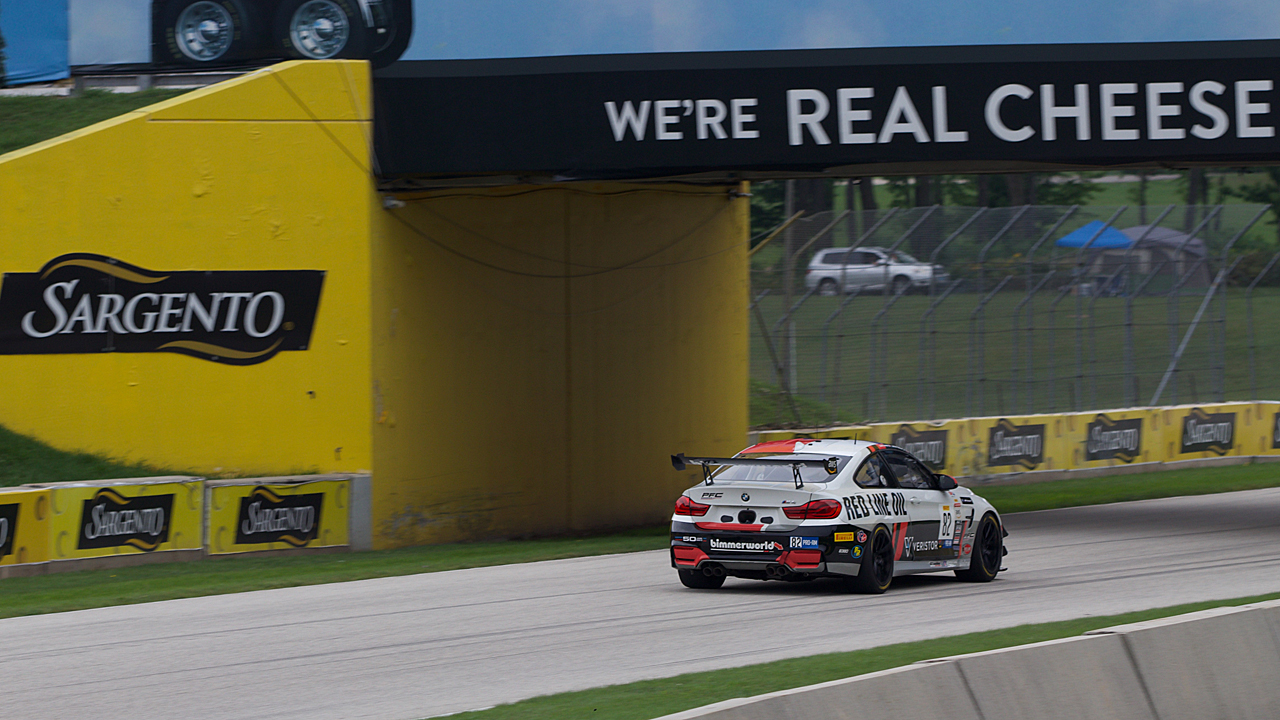 Just imagine me shaking my fist at the Sargento sign every lap. Because I was.

Q: How does this relate to anything at all? 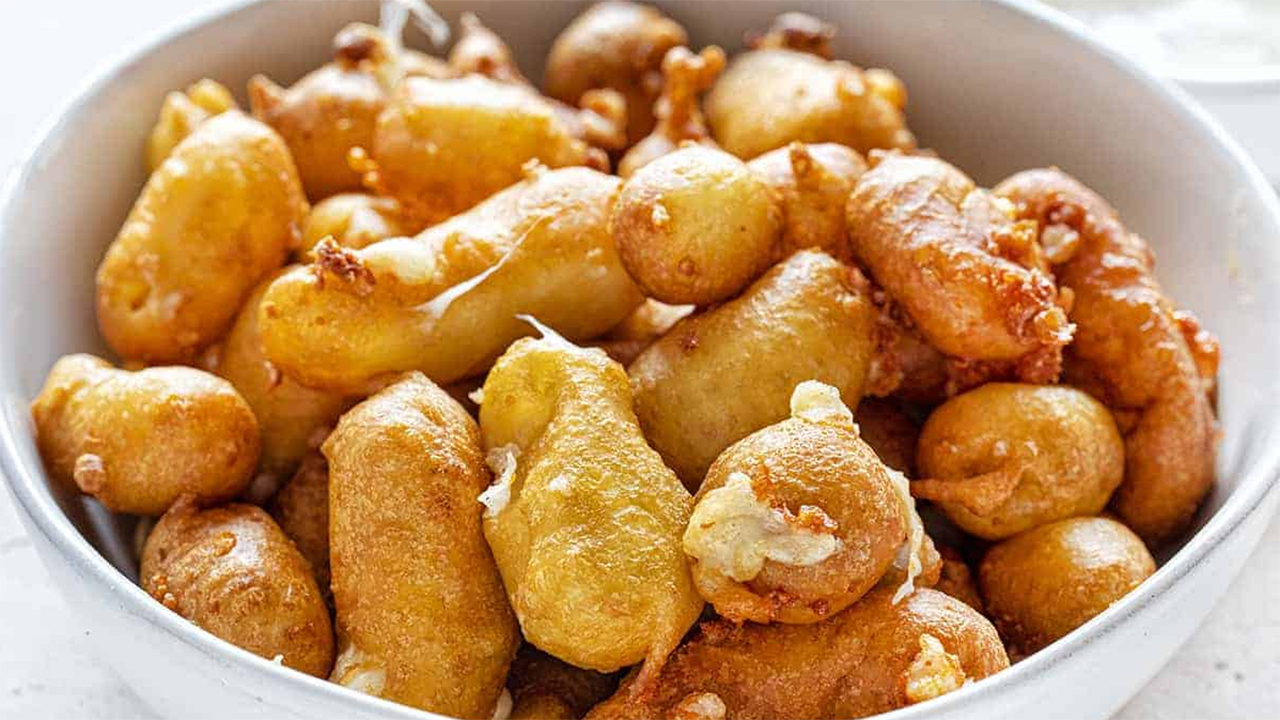 You might think this is a bowl of baby mozzarella sticks. You would be wrong.

As it turns out, this was a bold-faced lie. They were not like that at all. Cheese curds, at least the ones sitting on the table in front of me, contain exactly zero mozzarella cheese. These little imposters, concocted from cheddar cheese of all things, lured me in big time and I fell for it hook, line and sinker.

A: Well, maybe. It’s complicated. But that’s beside the point. I am still scarred from the experience. Clearly, it’s the last time I trust Jim’s assessment of any food product composition.

Q: Come on. I heard that you ate, like, 20 of them before discovering this.

A: Let’s not get mired down in the little details. I frankly blame the marinara sauce, at least in part, for masking the unfortunate truth.

Q: Are we done pivoting yet? Because I think we have heard enough about your cheese curd experience.

A: Yeah, I suppose. As I said earlier, I don’t have a lot of material to work with here. Cheese curds to the rescue! 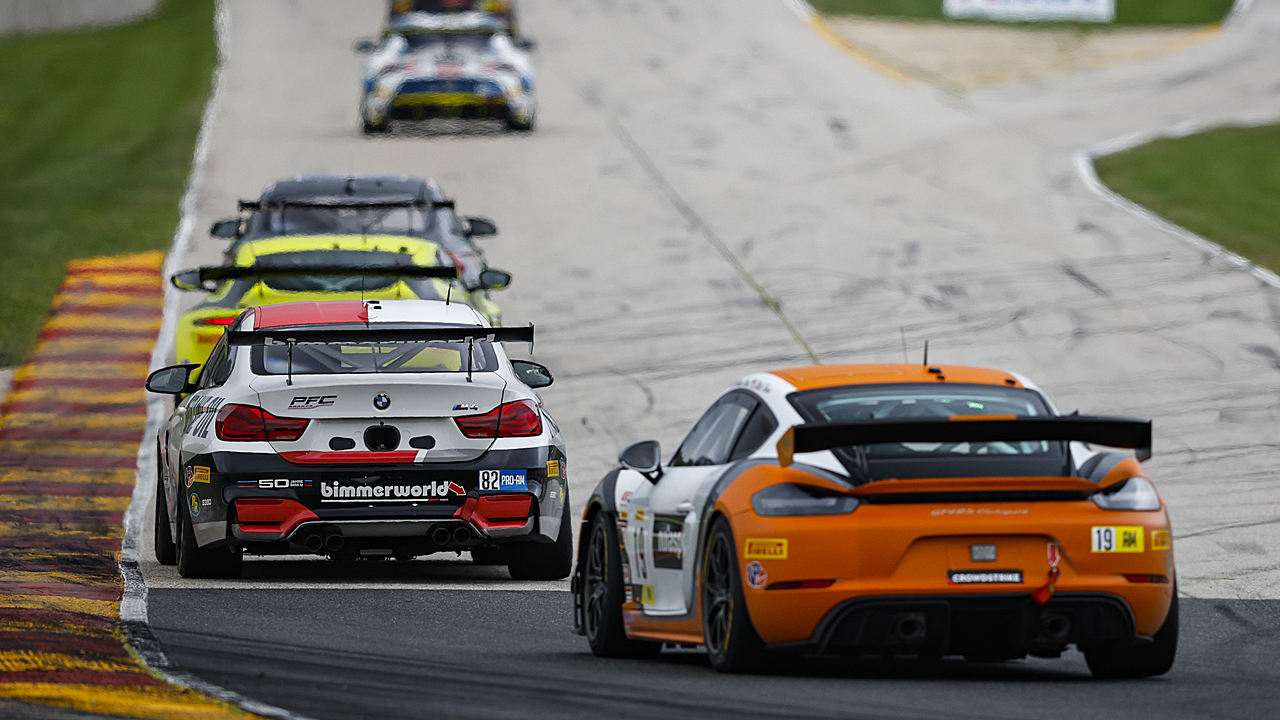 Another random picture of Devin coincidentally in front of what looks to be Matt Travis.

Q: I liked how you summarized the sessions the last time you wrote a newsletter (all that time ago). Can you do that again here?

A: Absolutely. A little copy-and-paste never hurt anybody.

So, in a nutshell, it was rough. Really, really rough.

Q: Nothing to shout about to be sure. Anything in there worthy of mention?

A: Hmmm…it’s been a while. All I really recall is that in Practice 2 I went out first and, in trying to break the intergalactic GT4 track record, I discovered the leading edge of the turtles in Canada Corner eats wheels. I hit the right front hard enough to turn the entire wheel drum into an egg-shaped ring of aluminum that contacted the caliper twice per revolution. It took an incredible amount of talent to do that, and after two laps of hoping it would magically heal on its own, I brought the car in for troubleshooting. Which pretty much wiped out the rest of the session. So that’s basically all on me. 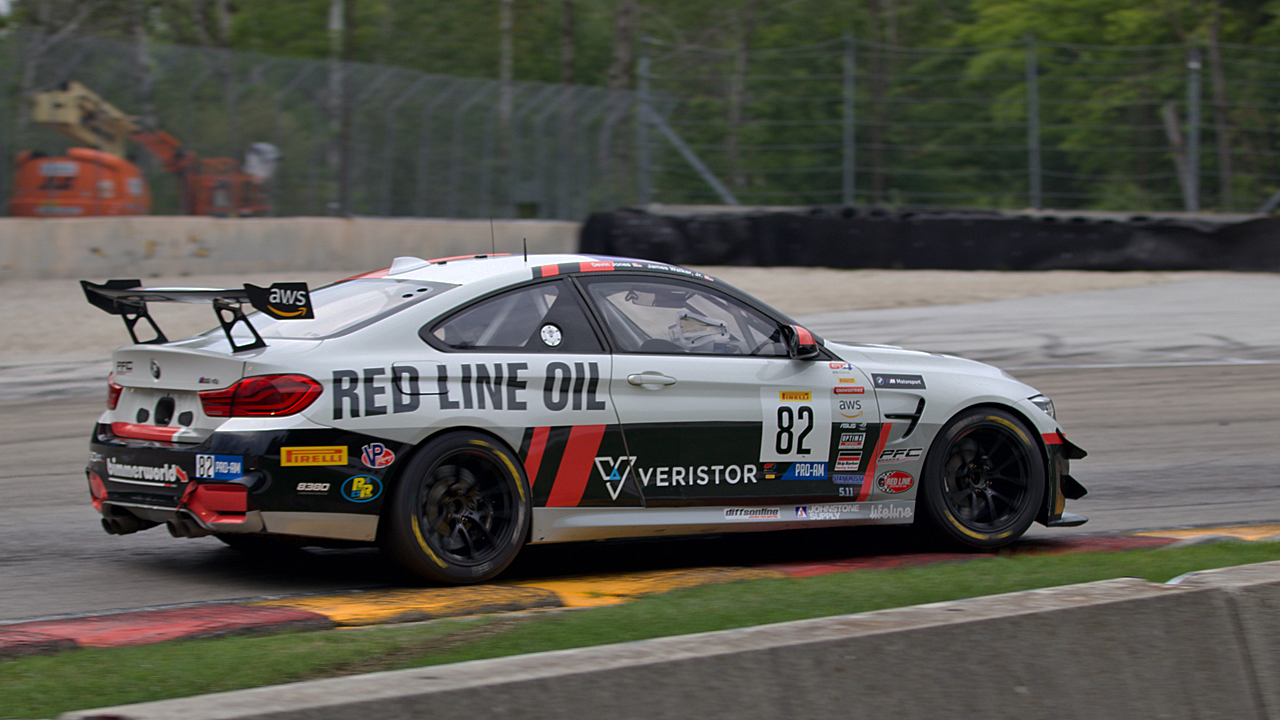 This photo was taken by Tim just milliseconds before the right front wheel was obliterated.

Q: I cheated and read ahead while you were going on and on about cheese curds. Seems like you guys raced better than you qualified.

A: It was a tale of two races. I started Race 1 on Saturday and did a little bit of moving, but it wasn’t like I generated some great surge from the back. I passed maybe four cars or so during my stint, but only one or two were for position in class. I handed the car off to Devin after 30 minutes and he was able to advance at about the same rate. Overall, we improved our 22nd overall starting position by seven spots, but that’s not exactly cause for raucous celebration. Without either pomp or circumstance, we accepted our 10th place finish in class (and the accompanying single championship point) with grace and dignity, but it was a bit too humbling for our taste. 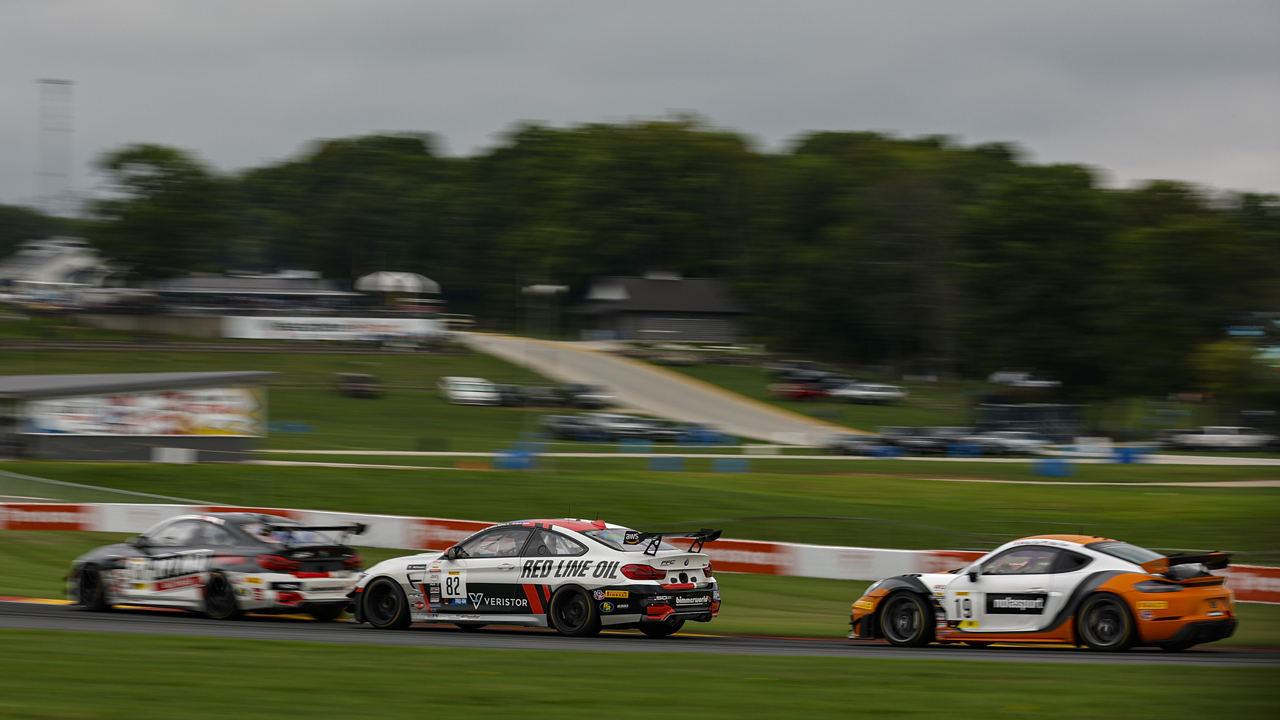 This is Devin hoping for brighter futures on Sunday…while in front of Matt Travis.

A: Race 2 was incrementally better, but we remained in the podium-free zone. Devin started 25th overall, and over the course of his 30-minute sprint moved up to 20th. Because of how the yellow flags came and went, I was only afforded five green flag laps to get things done once I was behind the wheel. In that duration, though, I was able to improve our overall position to 13th, so that’s something. This translated into 7th in class, and afforded us a five hundred percent increase in our awarded championship points!

Q: That means you only got six points, right?

A: Look at me trying to put a positive spin on things and you raining on the parade.

We now occupy 9th place in the championship standings with a total of 39 points. In case you have forgotten, that’s an improvement from the last time we checked in (“floundering around in 10th place” is how I phrased it), and only one point behind Chris Cagnazzi and Guy Cosmo in 8th place. Clearly, they should be looking over their shoulder at Sebring because we are coming for them and their little dog too.

Q: How many points are you out of first place?

A: Let’s just say that mathematically we can’t win the championship at this point. I know, news flash. But, if 374 discrete, unrelated, and improbable events took place in specific order (including a hurricane at Sebring and a meteor strike at Indianapolis), we could still end up in second place at the end of the year.

Q: You know that’s not going to happen, right?

A: Right. But it’s always good to know where you stand.

At this point in the season, it’s frankly no longer about the championship, but more about trying to get up on that elusive podium. There are four more opportunities in front of us, and we’re not going away quietly. 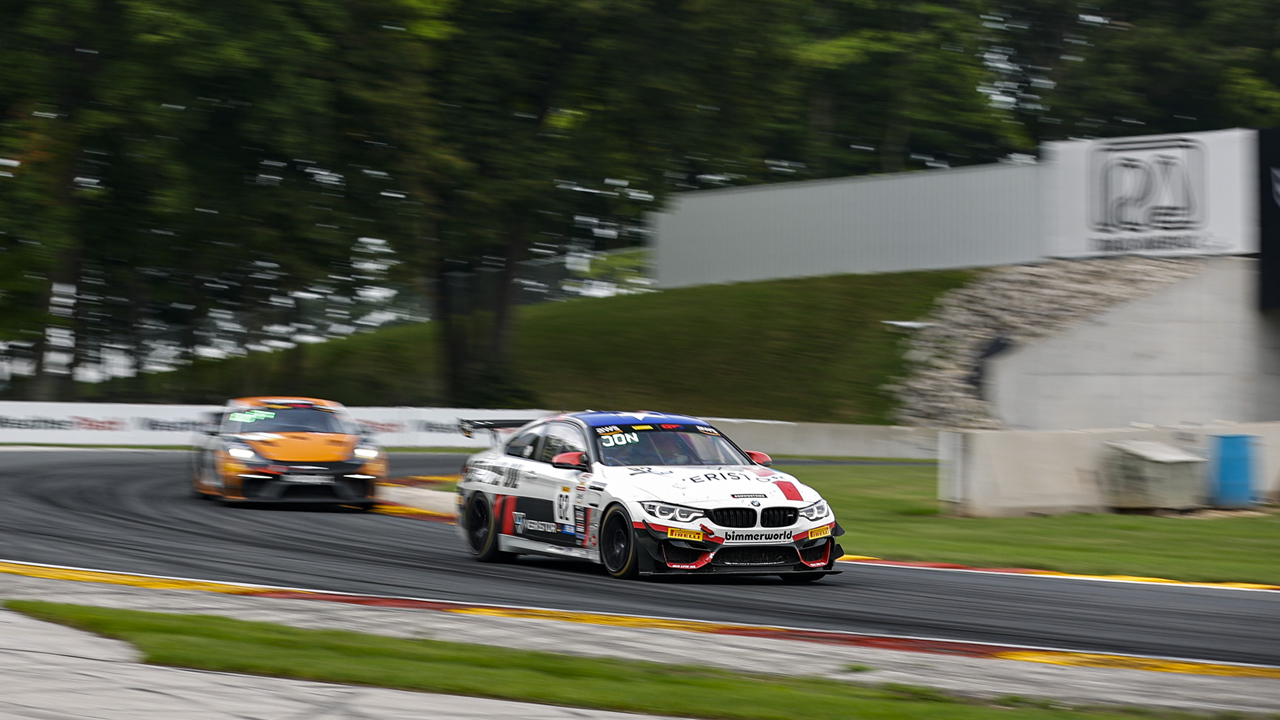 Q: What’s up all of these pictures of Devin in front of Matt Travis?

A: I don’t know. It’s crazy, right? I didn’t plan that or anything. Honest. Blame Halston and his photo peeps.

Q: Any pictures of the car without Matt Travis lurking in the background?

A: Just one. Literally. Just one. 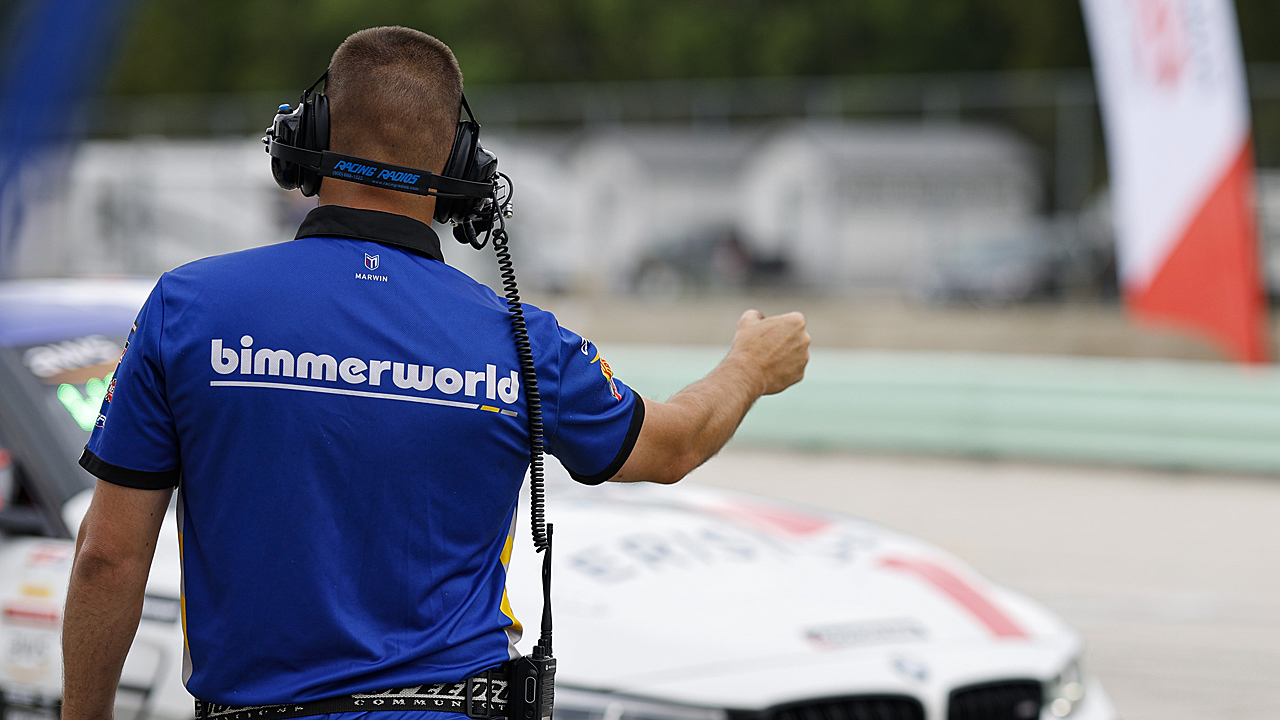 This photo has been framed strategically so you can’t see Matt Travis behind Devin.

Q: Sebring is next, right? This coming weekend?

Q: Have you prepared any differently? Any tricks up your sleeve?

A: No, no tricks. But we did practice there earlier this week, so we should hit the ground running. Or at least walking very fast. We had a strong car at Sebring last year, and even ended up with a podium in Race 2, but we are not taking anything for granted. We expect the competition to be as fierce as it has been all season long. 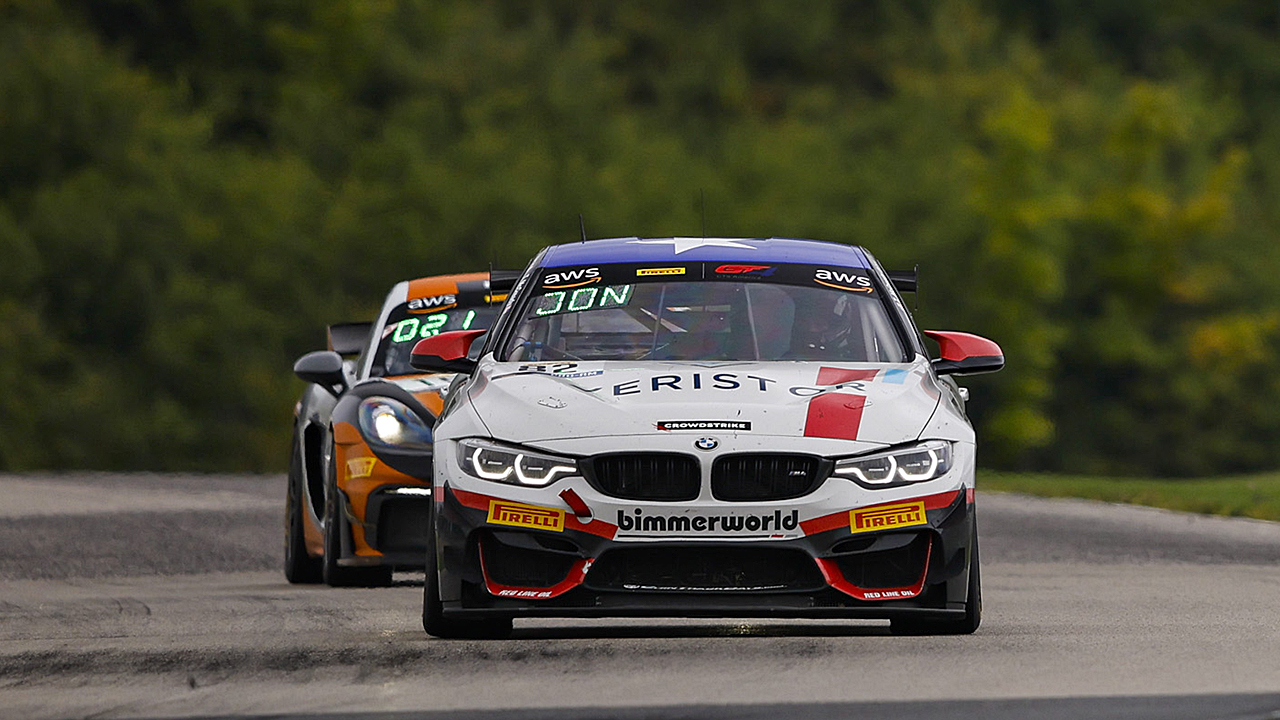 This is the final picture of Devin in front Matt Travis. Promise.

Q: Can you leave us with some Haiku, perhaps?

A: No. I’ll save that for the next newsletter. Consider yourself forewarned.