Let me just start by admitting that I did a pretty darn poor job this season of finding ways to smile in the midst of our GT4 trials and tribulations. As collateral damage, I also failed to keep up with my newsletter obligation. So, to remedy that in part, I am going to share a little story here in a season-ending newsletter that demonstrates you can indeed find something to celebrate in nearly every conceivable situation.

Now, in the spirit of full disclosure, this specific incident involves shampoo, hair conditioner, and body wash, so perhaps it’s not the most motorsports-centric example. But nevertheless, my therapist Mr. Clay tells me that the trip of 1,000 miles starts with the first step, or something equally cliché, so here we go. 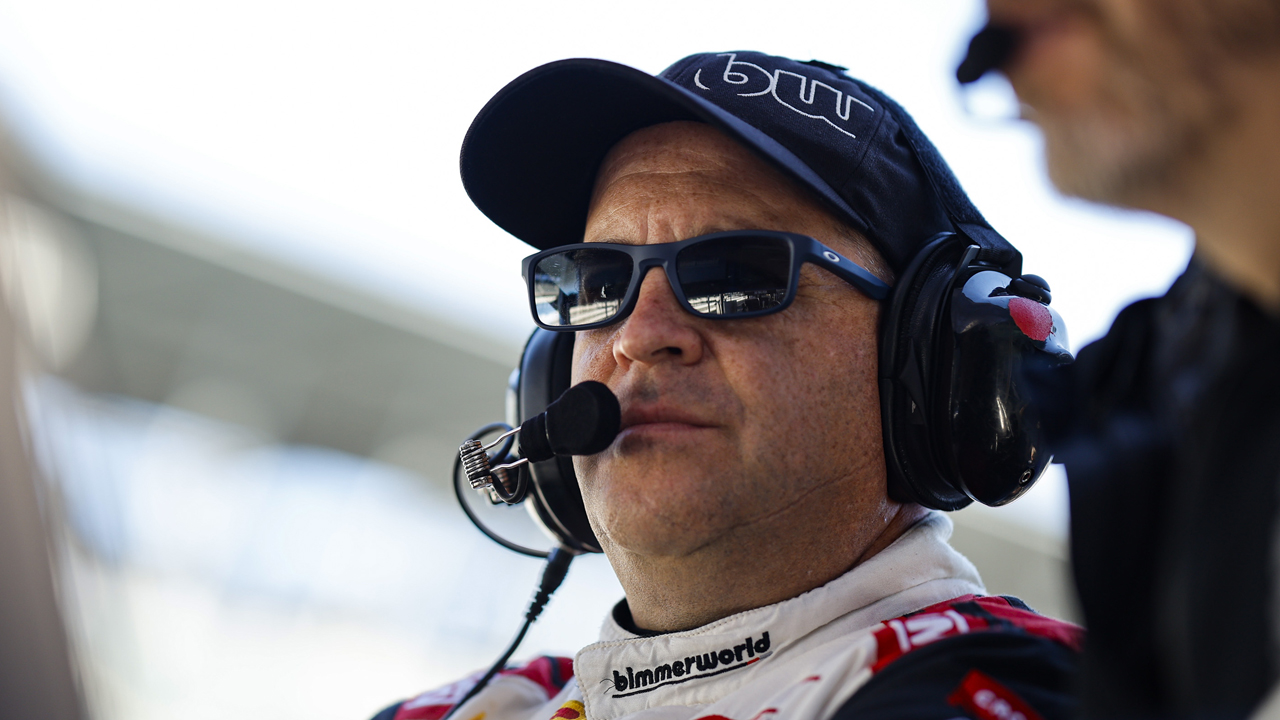 This is me wondering where I am going with this.

If you frequented Marriott-branded hotels as often as I do, you would know that bar soap in the shower is a thing of the past. Which makes me slightly grumpy since I happen to be a big fan of bar soap (and here you thought you knew everything there was to know about me). Instead, most Marriott properties these days have installed these three little pump thingies in the shower that dispense liquid shampoo, hair conditioner, and body wash with a push. And while that seems like perhaps a good idea to the people making decisions about personal care and hygiene products for Marriott, they clearly have not though this out in its entirety. Let me explain. 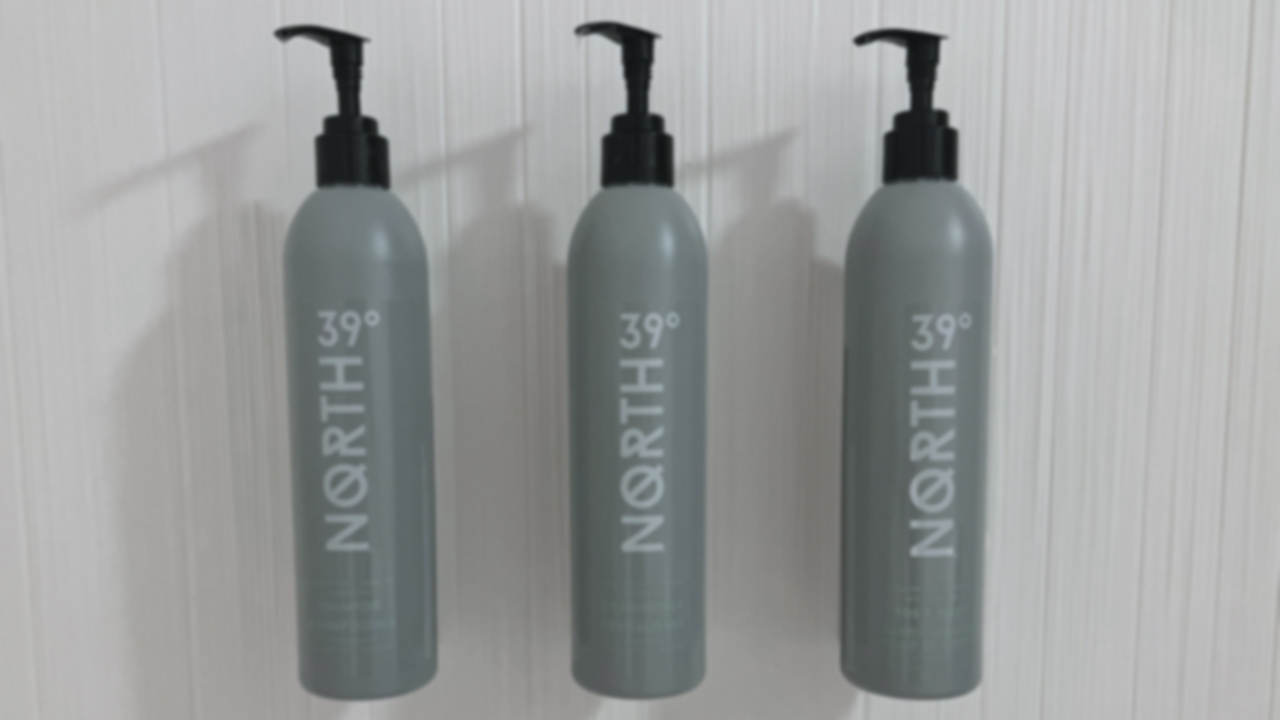 I dare you to tell me which of these three bottles contains body wash.

All three bottles look identical. I mean, completely identical. See the picture I took above. There is no error-proofing or differentiation in the shape, size, or color of these bottles. Now to be fair, there are what appear to be Egyptian hieroglyphics along the bottom of each bottle that are supposed to inform you as to the contents of that bottle, but they 1) are printed on the bottle using ink that is the exact same color as the bottle itself and 2) employ microscopically small text. I mean, really? Whose idea was this?

Compounding this situation is that fact that when I am in the shower, I am not normally wearing (don’t worry, this isn’t going to get awkward) my reading glasses. And even if I was wearing my reading glasses, they would be wet, fogged up, or both, making them useless. Which is massively inconvenient if you’re trying to figure out which of the identical three bottles on the wall in front of you contains the body wash. 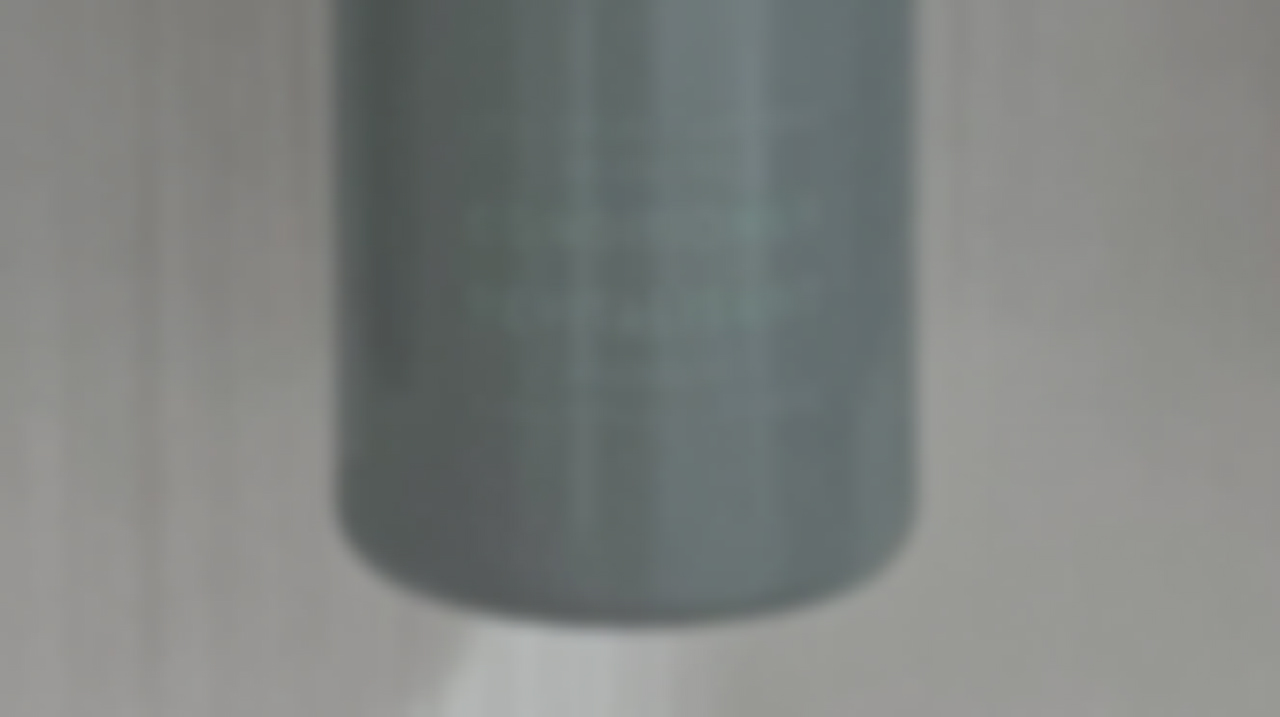 This is exactly how the body wash bottle looks to me in the shower without my reading glasses.

So, there I was staring at the shower wall trying to figure out what to do next. Sebring qualifying was only a few hours away, so a hasty decision was needed. Applying a layer of rationality to the situation, I recalled that the body wash I used (begrudgingly) three nights prior at a different Marriott property was found in the bottle on the far left. There must be some Marriott Hotel Corporate Code of Bathing Product Dispenser Installation Uniformity, right?

Public Service Announcement: there is no Marriott Hotel Corporate Code of Bathing Product Dispenser Installation Uniformity. And for this reason, I proceeded to wash my entire self using nothing but hair conditioner that morning. 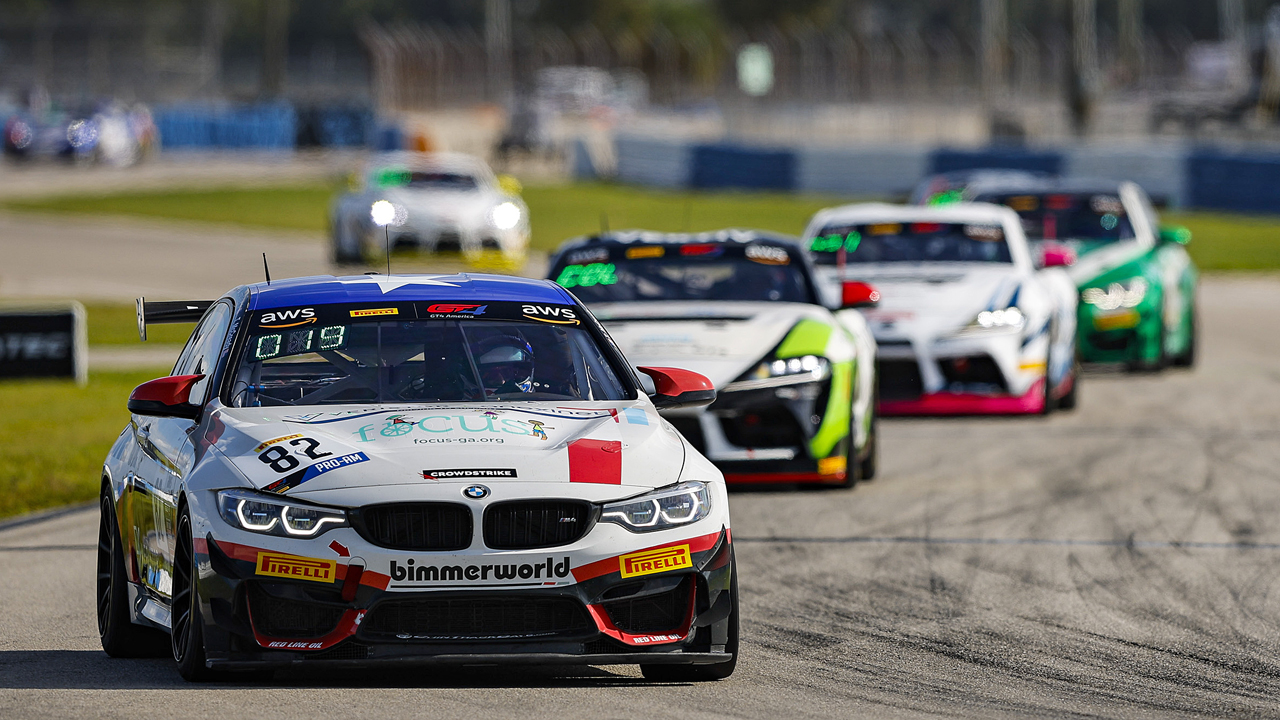 Interjecting a race pic from Sebring to break up this rambling diatribe about hair conditioner.

The 2022 racing season was littered with times that I proverbially washed my entire self with hair conditioner. And there was a litany of other times where someone else switched the hair conditioner and body wash bottles without telling me (looking at you affectionately, Bryan). In either case, this generally led to a predictable cycle of 1) immediate frustration followed by 2) prolonged pouting which led directly to 3) determined overcompensation.

None of which was particularly effective, helpful, or productive. And that’s on me.

But in retrospect, it turns out that when you inadvertently bathe your entire self with hair conditioner, your Nomex underwear glides on and off as if your skin is coated with Teflon®. Because it basically is, and you sort of dig it. You also carry a pleasing scent around the paddock all day which will catch the crew completely off guard. This might make you quietly wonder if you shouldn’t do it more often, and ironically, it might make you smile as you consider a new world that just hours ago did not exist. 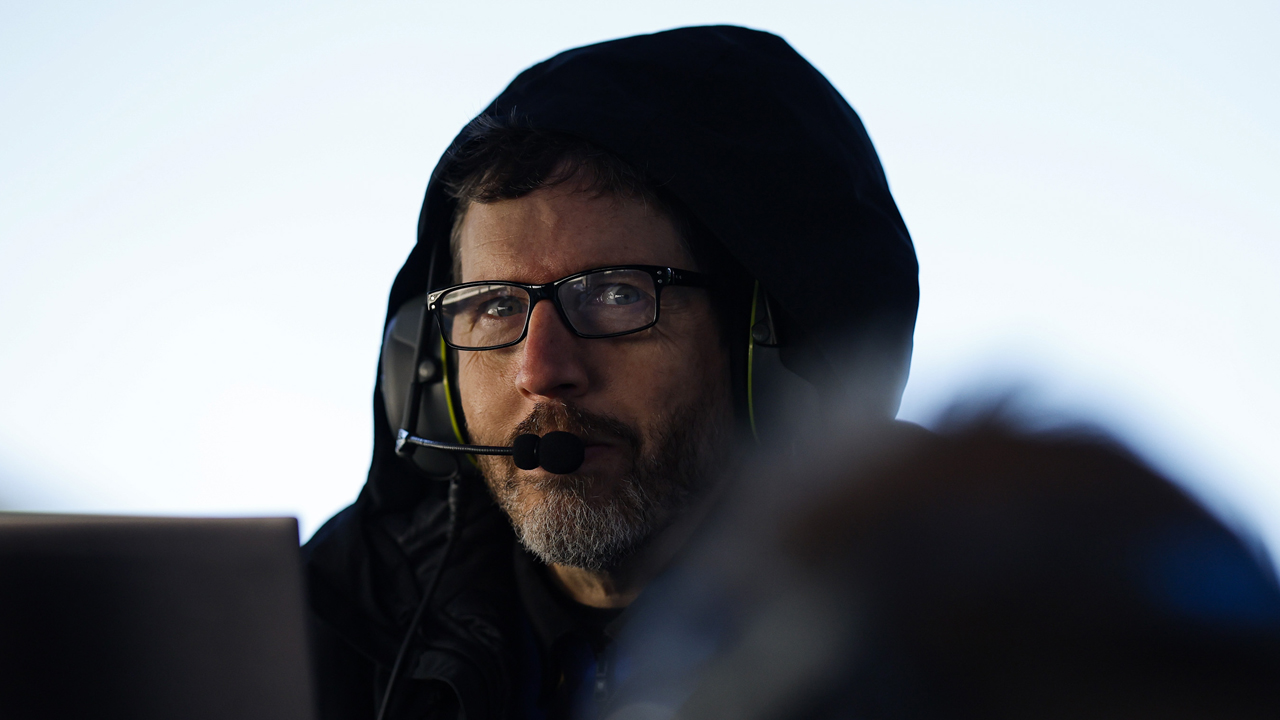 Here’s Obi-Wayne Kenobi wondering where that fragrant aroma is coming from.

There are times in life when you’re basically stuck with where you are, covered in hair conditioner, so why not make the best of it? And that’s really where this is all going. Racing parallels life because, well, it is life. A really, really cool version of life, but life nonetheless. And too often in life we get dealt a hand that we don’t particularly like. Or we bathe ourselves with hair conditioner. Or whatever. Yet despite the circumstances that got us there, it’s what we do next that really defines the situation. And ultimately us.

So, back to the racing. Let’s start at the end – Indy Race 2. Inarguably, I should have been sent into a tailspin after that event. In the final race of the season, Devin drove a monster first stint, taking us from P22 overall to P2 in class before the driver change. And then, on the second-to-last lap, just moments after I made the pass for P1 in class, I was unceremoniously taken out by an anonymous competitor (just for fun, let’s call him “Tom” for now) that I will graciously say had a lapse of judgement. The entire team was less than three minutes away from celebrating our first race win of the season – and a chance to kiss the sacred bricks at Indianapolis! – only to watch the car go spinning around sideways in the middle of Turn 1 with a broken rear suspension. 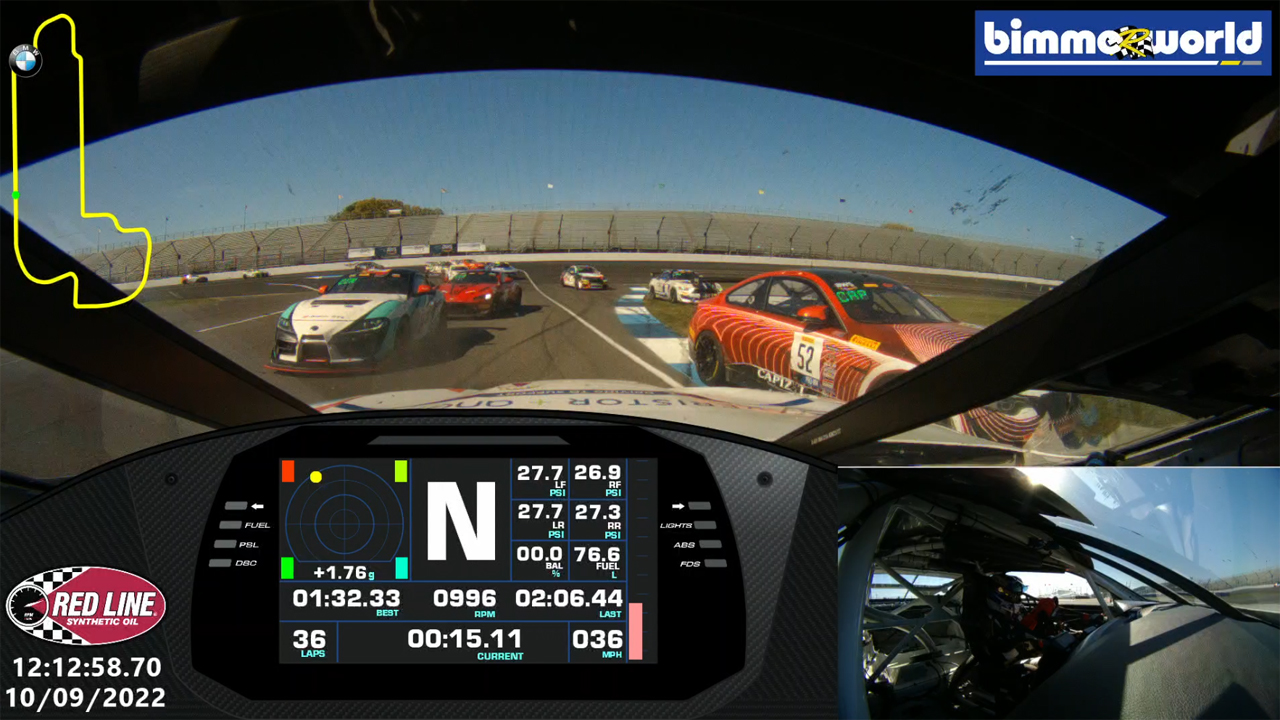 Not exactly how you want to end your GT4 season. That’s “Tom” on the right.

Naturally, I was disappointed. Pissed, to be more specific. But for some reason I can’t explain, I had a flashback to bathing myself with hair conditioner at Sebring and smiled to myself. I was racing at Indianapolis and had a legitimate chance to stand on the top step, kiss some bricks, and spray some champagne with Devin. It was something we could be proud of, and something that I will always remember fondly, even if we got wrecked out for no good reason whatsoever.

No frustration. No pouting. We were relevant at last! The team did everything that we knew how to do, and as a result we had put ourselves in a position to win at Indy. That’s worthy of celebration. 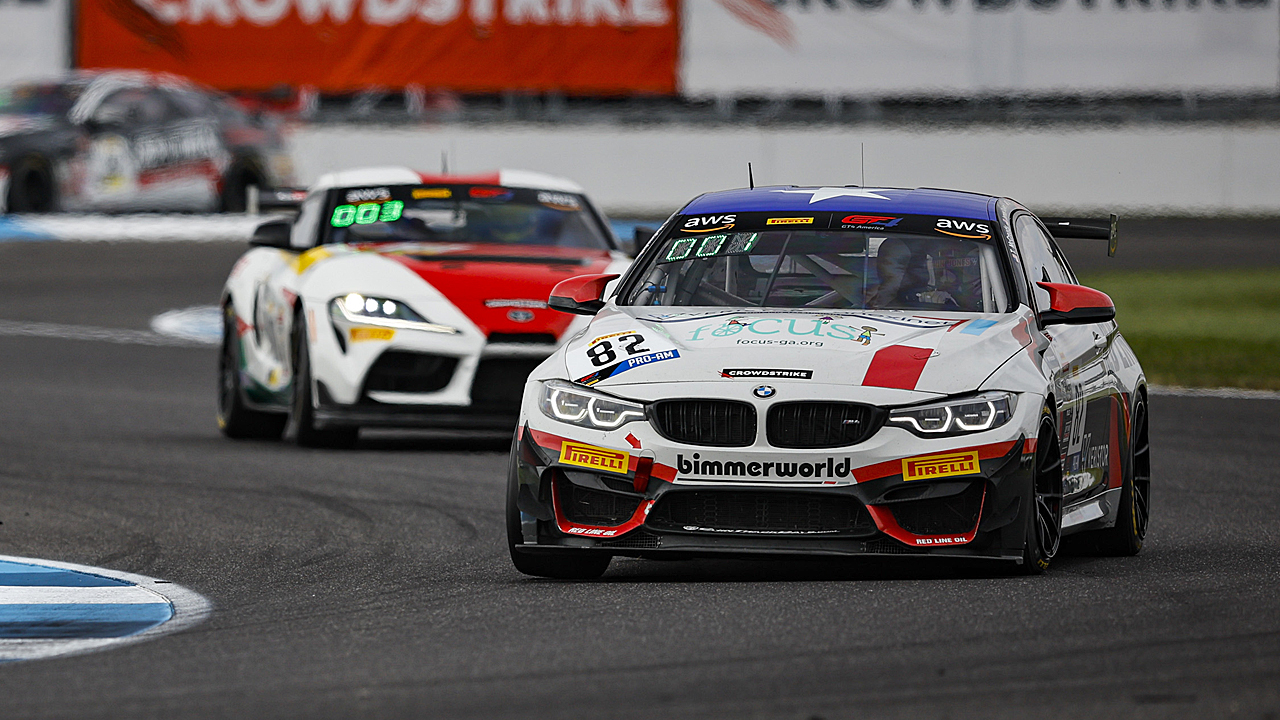 Devin lighting it up at Indy, wearing that 001 proudly.

With that change of focus, this was a fantastic year. Devin came alive at Sebring with a hero qualifying effort and backed it up at Indy with his charge to the front. He’s truly great again! Daniel and Zach nailed the car prep all season long, and Wayne always gave us a package that could compete even if the BoP deck was not always ever stacked in our favor. Dave’s home-cooked chick-on-a-stick always made me happy, and (the other) James and (the only) Charlie in the #36 car brought home the GT4 America Am/Am Championship. I mean, sure, we were covered in hair conditioner from time to time, but why should that take away from all the highlight reel clips we were able to pull together as a team? 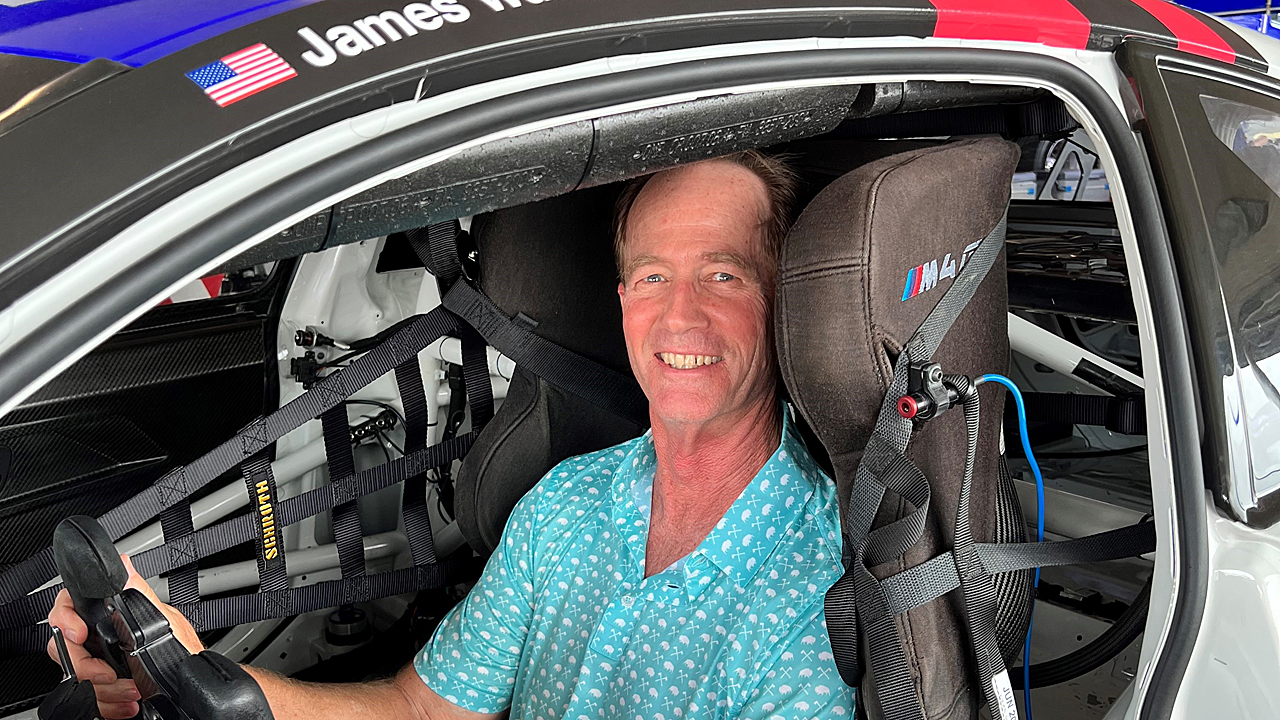 Conrad finally got to sit in the racecar this year at NOLA. That needs to be celebrated too!

Even our extracurriculars this season were reason to cheer. I got to spend two rounds with Hammer Motorsports driving at Barber Motorsports Park and Daytona International Speedway, including a stint 1) under the lights and 2) in the rain. Talk about a bucket list affair! And then I was fortunate to close out the WRL season earlier this month with Thunder Bunny Racing at the Circuit of the Americas (just don’t ask my opinion about their arcane passing rules). How can that be considered anything other than a remarkably awesome way to spend one’s free time (and disposable income), even if it does happen to inconveniently fall on your wife’s birthday? Please don’t answer that one out loud in Dana’s presence. 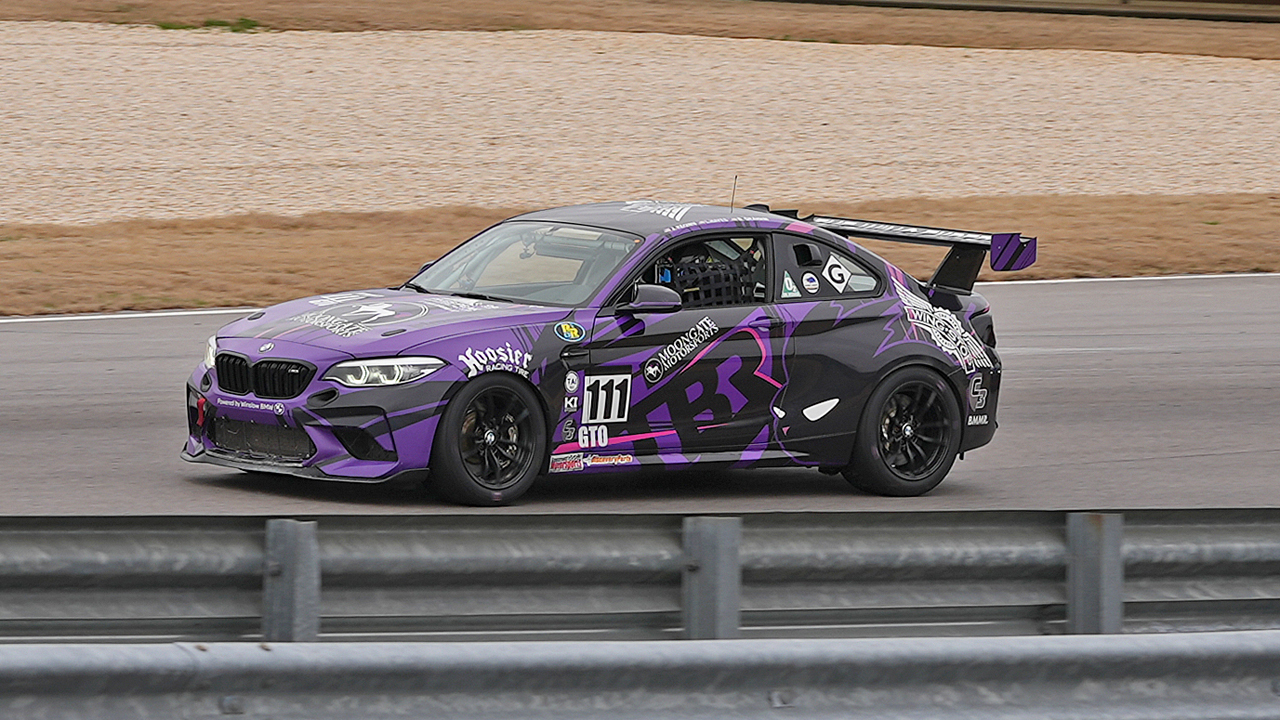 That rabbit’s got a vicious streak a mile wide!

And now for the spoiler alert. We fell short of winning the GT4 America Pro/Am Championship. By a lot, as it turns out. We ended the season something like 9th in the points, and academically, that’s somewhat forgettable. But what I am really taking away from the 2022 season is what we did and how we did it. The BimmerWorld Racing team put on a performance this season worthy of a championship, with Devin, Daniel, Wayne, Zach, and the other 10 guys in the trailer putting their heart and soul into every single weekend. I am so, so thankful for that, guys. We didn’t get the result we were all chasing, but I could not be prouder of the effort. So, as 2022 draws to a close, I’m in a pretty good place. 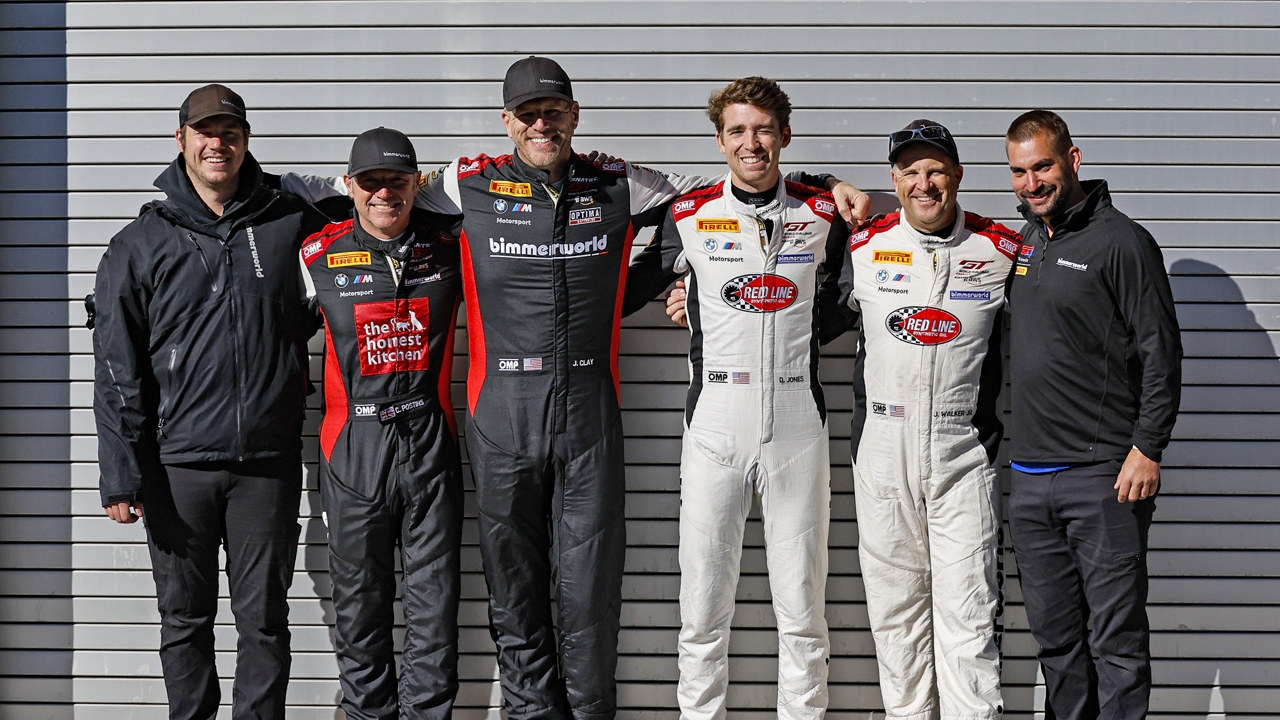 My favorite picture from the 2022 season. Last dance at Indy.

Now, before you ask, no big news yet about 2023. The puzzle pieces are still sitting all over the kitchen table. That said, clearly there is unfinished business here in GT4 with the BimmerWorld team. And BMW just released a new M4 GT4 for the 2023 season. You do the math, but I suspect that Mr. Clay will be announcing something in the next few months or so…