A: Who said it was bad? It took me three solid minutes to come up with that! I see this being a theme until I get bored with it.

Q: So much said with so little, I suppose. Sounds like you’re racing again this year?

A: Much to Dana’s chagrin, yes. Although, to be fair, at the end of the 2020 racing season we did thoughtfully and thoroughly consider two options for moving forward.

Option #1 involved racing again in 2021. I brought this idea to the table this year like I have every year for the past 24 years.

Option #2 involved doing absolutely anything else under the sun other than racing again in 2021. Dana brought this idea to the table this year like she has every year for the past 24 years.

Dana requested a recount since there were rampant allegations of election fraud. But the results were upheld and the default win went to the incumbent, Option #1.

Q: Like it has every year for the past 24 years?

A: Like it has every year for the past 24 years.

Q: You realize that you have the best wife on the planet, right? 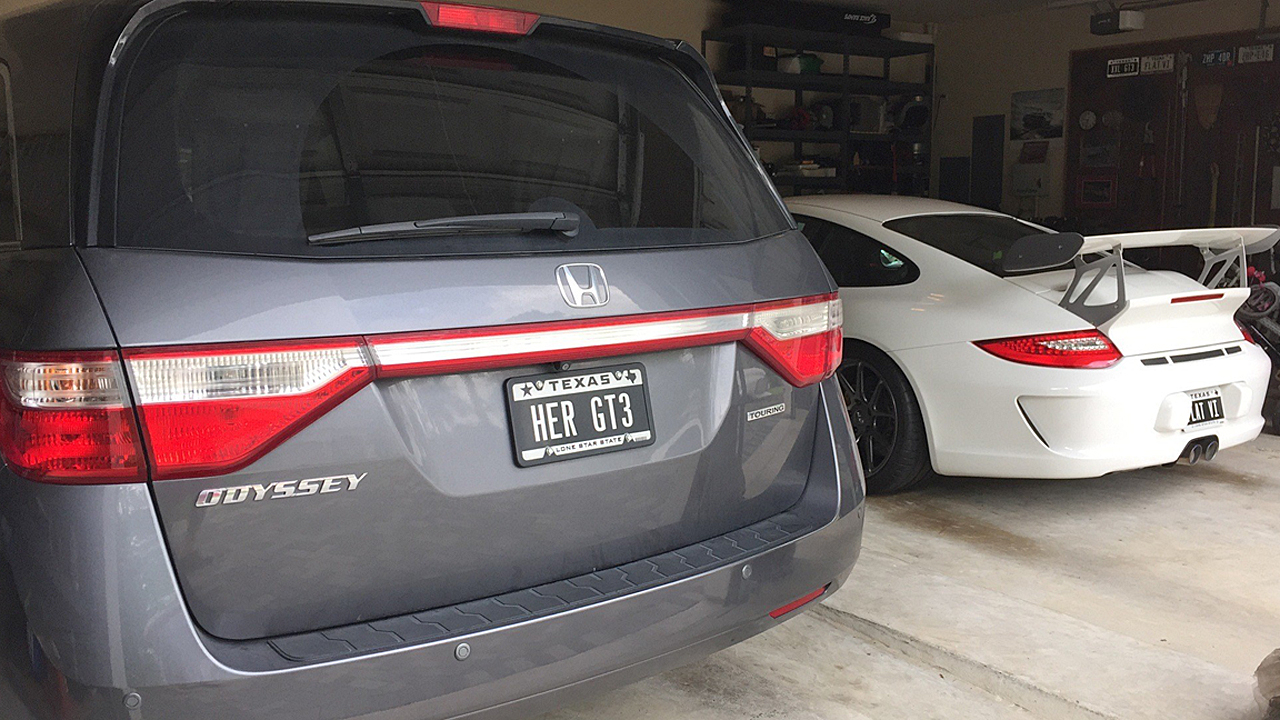 She even humors me with her license plate. Best wife ever.

Q: So, what’s the game plan? Any “huge secrets” this year?

A: No huge secrets. You can watch last October’s 2021 announcement here if you missed it the first time around.

That said, there are some sweeping changes.

Sweeping change #1: The Twins, Jordan and Bryce, have moved on to their own racing gig. Which is GREAT for them, but leaves a gaping hole in the car prep routine. I have been told that “Daniel and Tyler” will be taking over where Jordan and Bryce left off, but these new guys have pretty big Mechanix gloves to fill.

Sweeping change #2: After a season in exile, our favorite number, 34, will adorn the doors and hood of our M4 GT4. This nearly brings a tear to my eye.

Sweeping change #3: Let’s face it, last year’s livery wasn’t exactly awesome. Good, but not great. For 2021, we will be sporting a brand-new look designed to complement our two sister cars in the series. 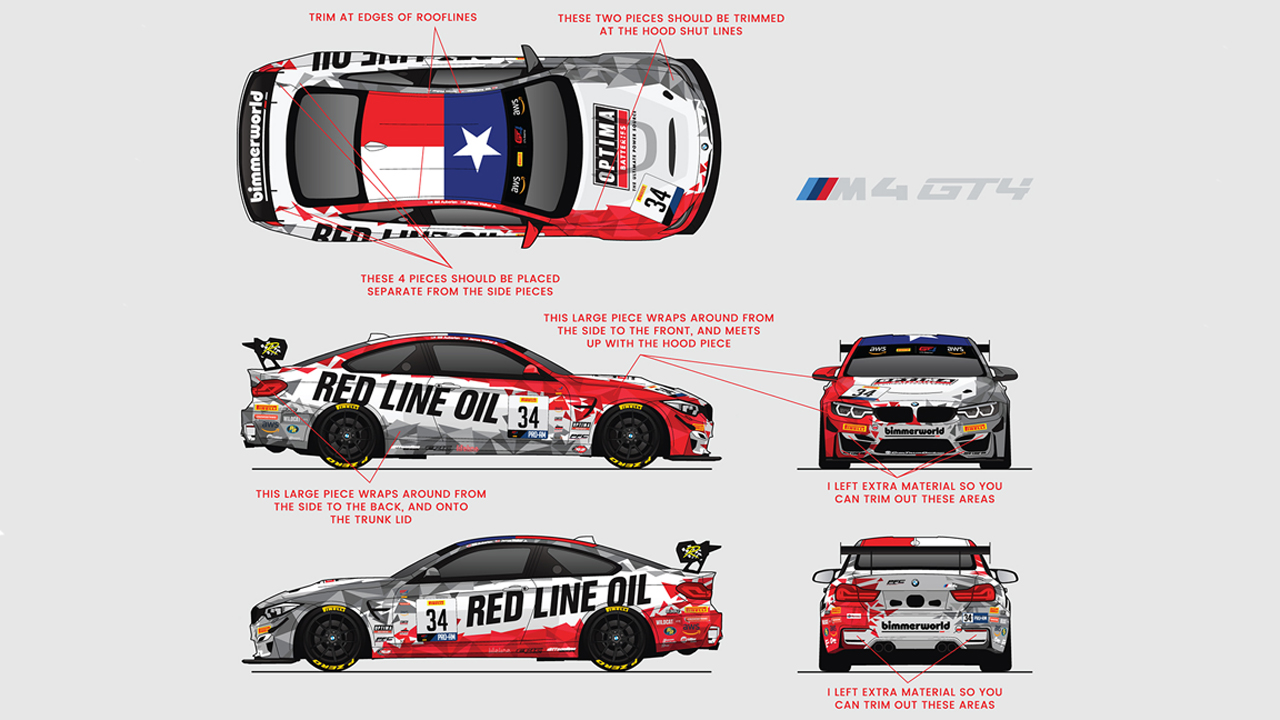 A: Yeah, that’s a sweeping change, too. In 2021, BimmerWorld will be fielding three separate GT4 SprintX entries.

The #34 car you already know about. That’s Bill and me. You know, the car that is going to win the 2021 Pro-Am Championship with a Texas flag on the roof.

The #36 entry will be shared by James Clay and Nick Galante. You just know Nick is fast, as he has his own website. James and Nick will also be competing in the Pro-Am category, so it will be disappointing for them when Bill and I win the Championship. I would write more here about their sponsors and stuff like that, but then this becomes another boring press release. Their car has this cool asymmetric purple-and-gray thing going on, but does not have a Texas flag on the roof.

The #94 entry will be shared by Chandler Hull and Jon Miller. If you click on their links you will see that they appear to be very serious-looking guys. Because they are both supposed to be faster than me, their car is competing in the Silver-Silver category. A red-and-blue motif will set their car apart from the other two BimmerWorld GT4 SprintX entries, but again, no Texas flag on the roof. Allegedly they were off last week racing together in Dubai or something like that while I was at home fixing busted pipes during the 2021 Texas Deep Freeze. How fair is that?

Q: So lots to build on, but lots of new team dynamics to navigate. Is there a season schedule out yet?

A: Absolutely. Contrary to the secret code of professional racecar drivers around the world, I have updated the team website before the season opener. For the full 2021 SRO GT4 America SprintX schedule, just click here.

For the link-impaired, this season will take us to Sonoma, Austin, Mosport, Virginia, Elkhart Lake, Watkins Glen, and Indianapolis. Two races will be held every weekend for a total of 14 trips to victory circle.

Q: Have you been in a racecar since last October at Indianapolis?

A: Just barely. This past weekend I was able to join up with James and Nick (remember that Chandler and Jon were off playing in the sand) at COTA for a few hours of track time. Snow, ice, rain, frozen pipes, no electricity, no water, and a general sense of Texas-style Armageddon wiped out all of Friday and most of Saturday, but Sunday allowed me to put in some quality laps. My lap times didn’t completely suck, so I am hopeful that we will come back up to speed quickly at Sonoma. 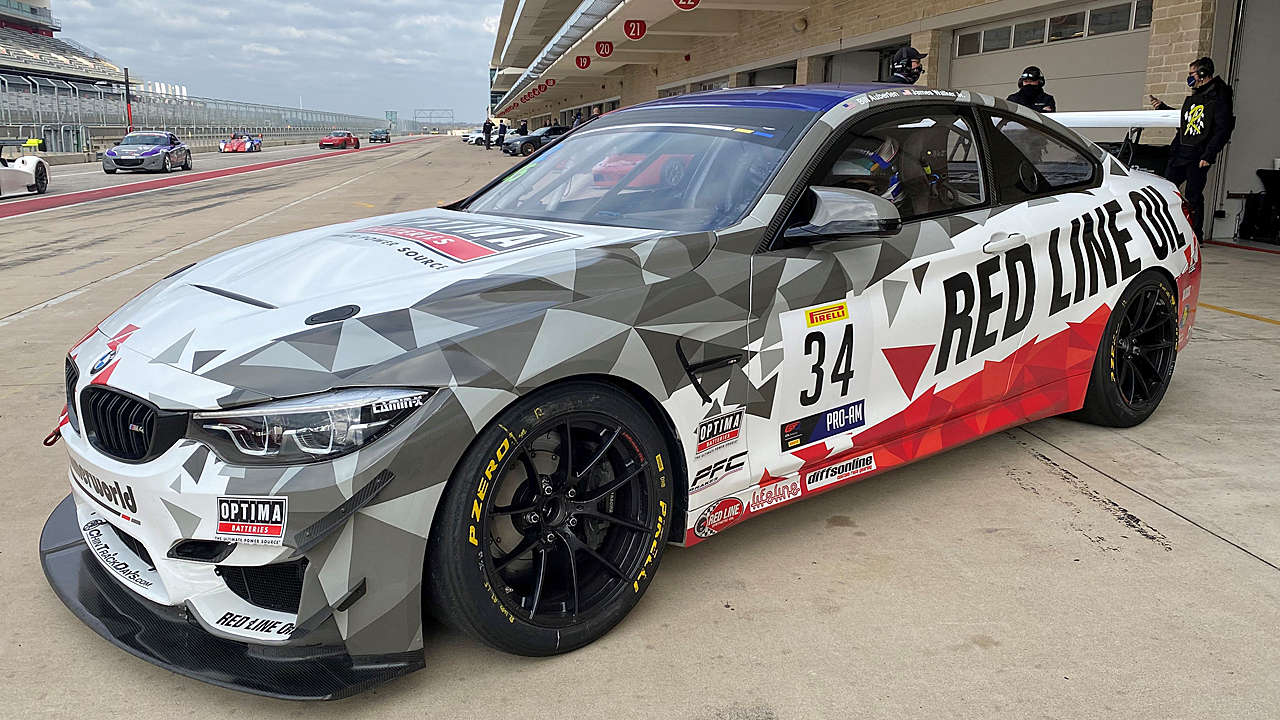 A sneak preview of the new livery in person. Love that #34.

Q: So when is Sonoma? I’m too lazy to click on the link.

A: In five days! If you eventually find the energy to click the link above you will see that we race on Saturday afternoon (March 6) at 4:05 PM Pacific time and again on Sunday morning (March 7) at 10:55 AM Pacific time. I’m pretty sure that if you click on this link you will be able to surf around until you find the place to watch them live online like last season.

Q: Any idea how big the field will be?

A: So far, we are being told that 32 cars are registered for our race. That’s a huge field! Of those, it looks like about half will be Pro-Am cars. If you want to check out the entry list for yourself, you can click here.

Q: Got any intel on the competition? Same cast of characters as last year?

A: Sort of. Scanning down the Pro-Am entry list affords the following observations. Note that I don’t know all of these racers personally, so some of this might be slightly fictitious.

Matt Dalton and Patrick Gallagher return to the field in their #00 Aston Martin Vantage. It took me all of last season to realize that their team name, NOTLAD Racing, is Matt’s name spelled backwards (not the Matt part, the Dalton part). Was I the last one to that party? Now that we have that under our belt, I feel so much better. REKLAW Racing (see what I did there?) has their number.

The #2 entry will be shared by Jason Bell and Andrew Davis. They finished just behind us in the Pro-Am Championship last year in a Porsche 718 Cayman, and have jumped on the Aston Martin Vantage bandwagon for this season. So we really hope that doesn’t work out for them. We just don’t need another Aston Martin Vantage on the grid. I expect that the car will be adorned with a thick gold chain draped around the windshield. If you get that, it’s hilarious. If not, it makes no sense at all.

Bryan Putt has again escaped from the old folks home long enough to spend the 2021 season paired up with Kenton Koch. Like last season, they have slapped their #15 decals on an…Aston Martin Vantage. To be fair, they were Aston early adopters. When they’re on, they’re on, so keep an eye on them. Just be sure to wake Bryan up from his nap in time to make the formation lap.

Gray Newell and Ian James join the grid in an…Aston Martin Vantage. I don’t know Gray at all (at least I don’t think I do), but last season Ian ran around a few times in the Mercedes Tide Pod. I mean, the Panoz Esperante. Another defector joins Aston Martin ranks.

Joe Rubbo and Ryan Eversley make their GT4 pairing debut this season in an Aston Martin Vantage. Just kidding – they are in the #28 BMW M4. Both of those names should sound familiar to you. We raced against Joe in Ferrari Challenge back in 2017. He even won the Championship over in Italy that year. Ryan is one of those really famous racecar driver guys, so this should be a strong effort. 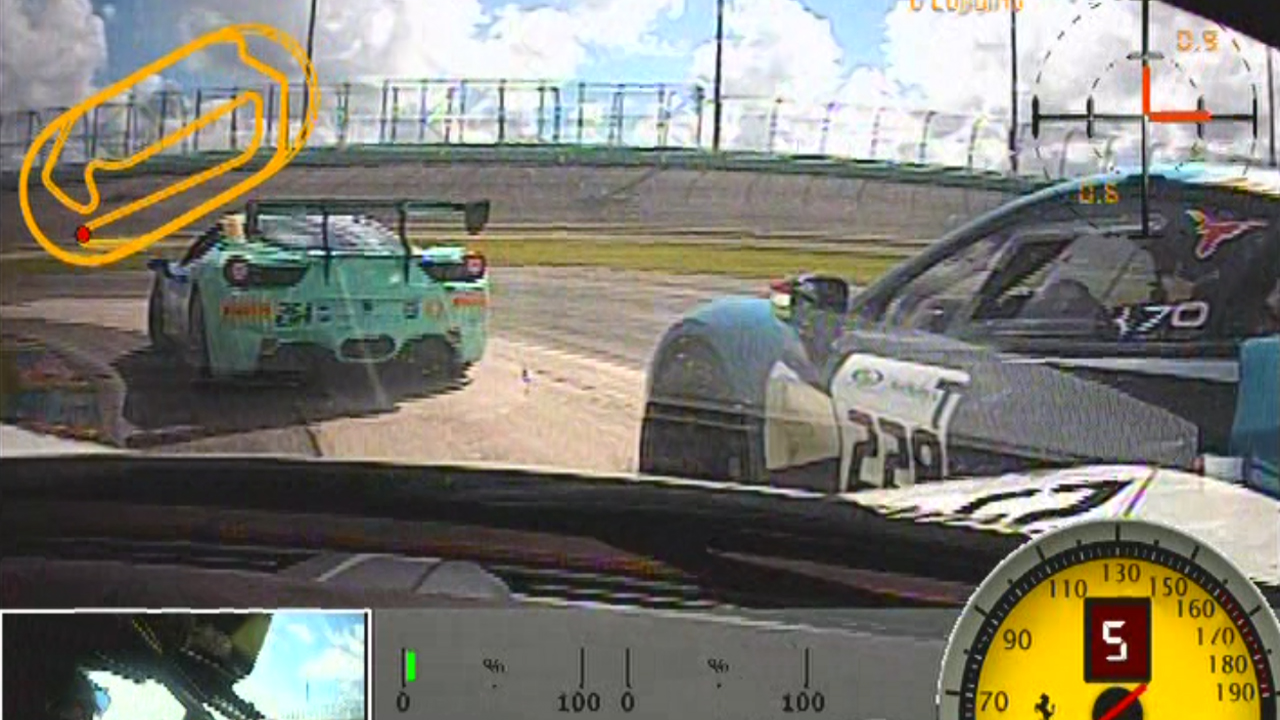 Me pushing Joe out of the way at Homestead in 2017. Memories, but not one of my finer moments. Sorry again, Joe.

You have already heard about the #34 and #36 BimmerWorld Pro-Am entries, so we will skip over them. There was talk about us switching to Aston Martin for this coming season, but changing the team name to AstonWorld just didn’t resonate with Mr. Clay (although, being honest, I think it sounds of catchy).

Black Swan Racing is putting Tim Pappas and Jeroen Bleekemolen (don’t ask, I can’t pronounce it either) in a Porsche 718 Cayman. Don’t know these guys, but just glad it’s not another Aston Martin Vantage. I hear they might be fast. People with last names I can’t pronounce usually are.

Paul Terry and Brandon Davis bring their #59 Aston Martin Vantage over from Sprint to SprintX. Because all the cool kids are over here in their Astons.

The Racers Group (I think they are missing an apostrophe there) is entering a Porsche 718 Cayman with Derek DeBoer and Spencer Pumpelly sharing driving duties. I don’t know these guys at all, but they do win the award for having enough sponsors listed on the entry sheet that it wraps around three times.

And now, for something completely different, our next entry will be competing in a Mercedes-Benz! In staunch defiance of Astonmania, Ross Chouest and Aaron Povoledo (the only Canadian in the Pro-Am field, eh) will be charting their own path in the #89 AMG. I suspect they might have a home field advantage at Mosport, but I’m mostly concerned that I can’t pronounce either of their last names.

Sean Quinlan and Gregory Liefooghe return in 2021 with their orange-and-blue #119 BMW M4. You might recall that I (sort of) hit Sean at Indy last year. I promise that I will stay far enough in front of him this season that it will never happen again. I’m still embarrassed about that.

Apparently, there is also an Audi joining us this season. Who allowed that? The #8 R8 will be shared by Elias Sabo and Andy Lee. They list “Sterno” as one of their sponsors, which seems like it would have been a more appropriate sponsor for any team running one of those KTMs last year. Too soon?

And finally, the Pro-Am grid is completed with the #450 (I didn’t know the numbers went that high) entry of Daren Jorgensen and Brett Strom. I think Brett should change his last name to “Storm” because it sounds much more intimidating. But in any case, they are rolling an M4 out of their trailer at Sonoma to help us lead the BMW resistance to the Spec Aston Martin Vantage movement.

Q: That’s quite the rundown. But I think you missed one.

The World’s Fastest Accountant, Matt Travis, and Jason Hart will be making their third consecutive attempt at a second-place Championship finish in their #47 Porsche 718 Cayman. I think they are going to put a large cougar (yes, seriously) on the hood of their car in hopes that it breaks their we-were-leading-the-championship-until-the-last-event curse. Channel your very best Ricky Bobby, boys. 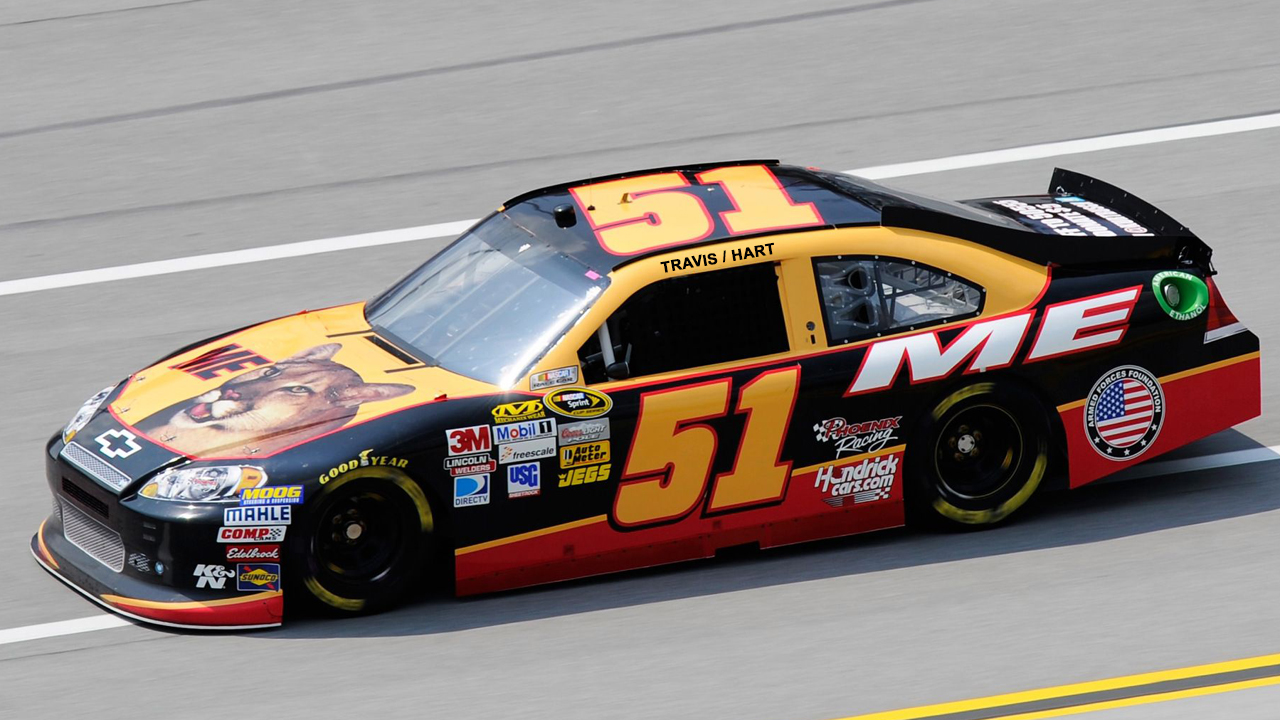 I’m not judging. Honestly. Enjoy the big-feline-on-the-hood thing. It might work.

Q: So how does the car count break down?

Q: I think your numbers might be slightly off.

A: I’m just rounding differently than you are.

Q: Anything else you need to let us know?

A: I think that’s about all, but let’s close out with another Haiku.

Astons and cougars?
The band is back together.
Sonoma, bring it.