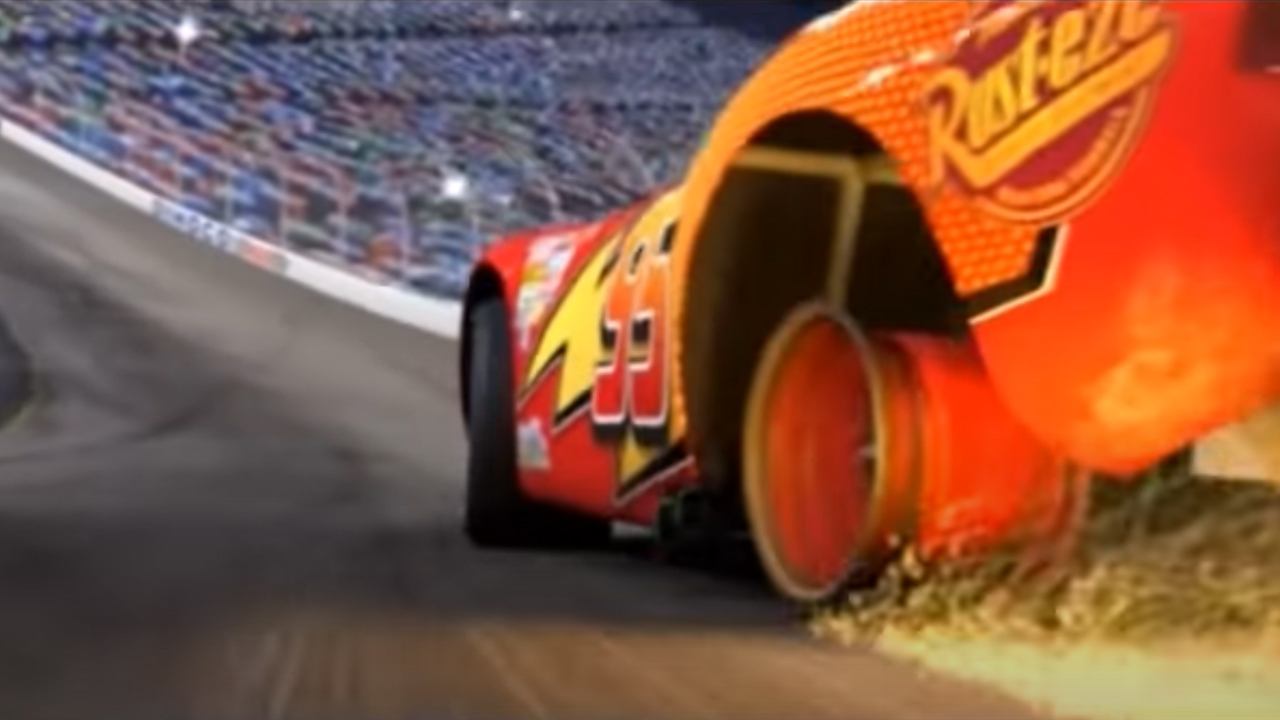 Lightning McQueen is a hundred feet from his Piston Cup!

Q: Why is Lightning McQueen still a hundred feet from his Piston Cup?

A: Because Zack’s M3 was too! In a different sort of way, but the situations are similar enough that I could squeeze in the reference one more time.

Q: What does that mean?

A: It means I also now know what it feels like to lose a tire at a high speed. About 75 miles per hour, to be precise, about five miles south of Elkhart, Texas, about two hours away from home, at approximately 6:10 PM, on US Route 287. Don’t worry, there was no significant damage. 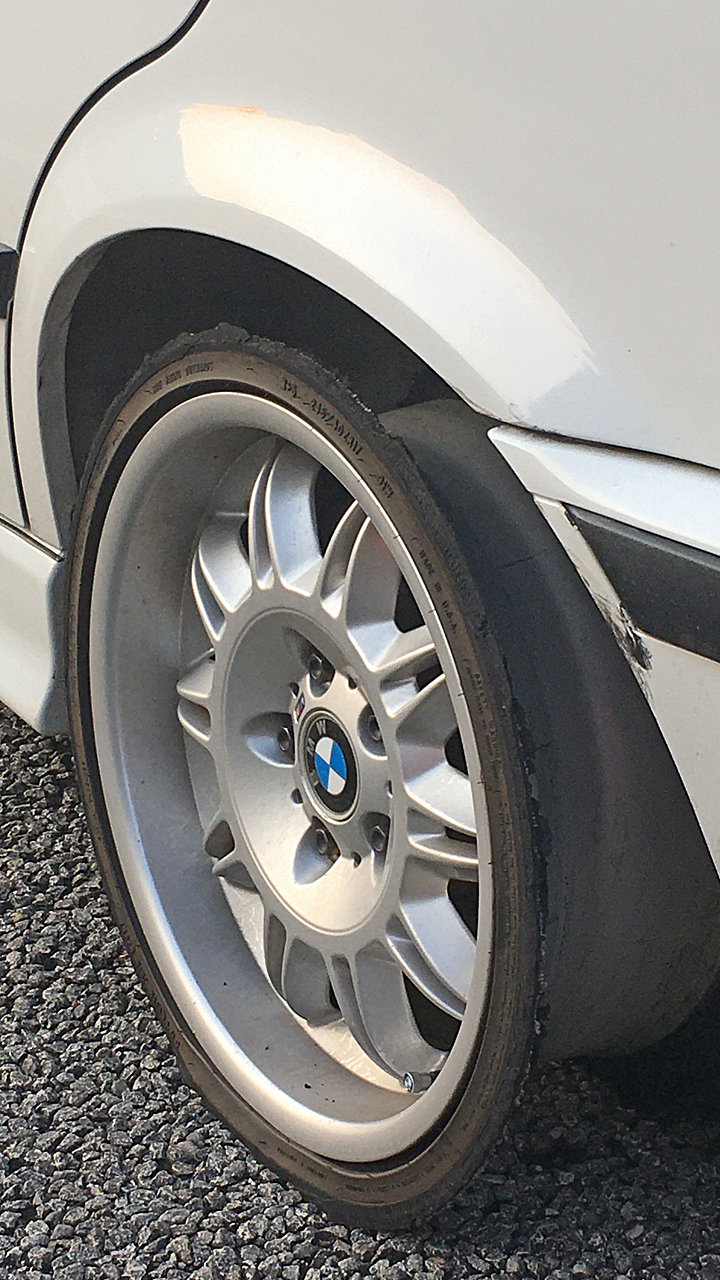 No wheel-to-ground contact. The sky must have been filled with my lucky stars on October 2nd.

Q: How did that happen?

A: Very suddenly. When I got back home, we found that I ran over something pokey that resulted in a perfectly symmetrical separation of the tire from the wheel. This may be the cleanest tire blowout that has ever happened. 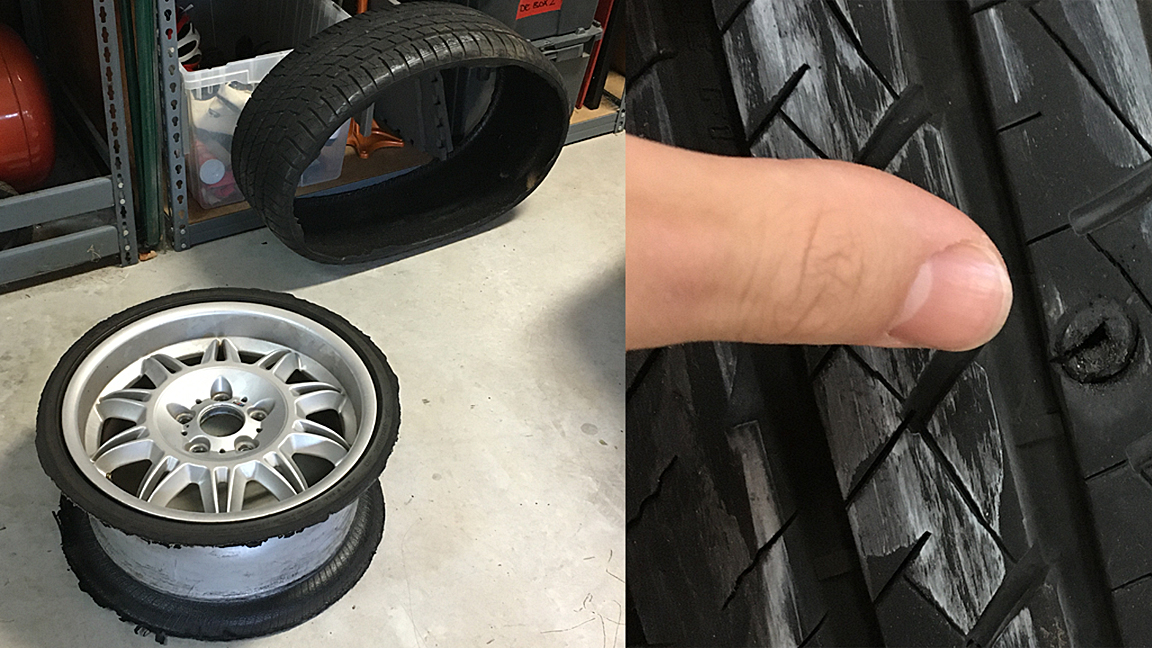 I also learned that new tires are expensive.

Q: Are those white streaks paint?

A: Yes. Fortunately, I must have only driven for a few seconds with a bad tire before seeing it assume position in the side-view mirror. So, there was no damage to the bodywork; only a little bit of paint was scraped off. This is the closest I’ve ever been to having white-wall tires. 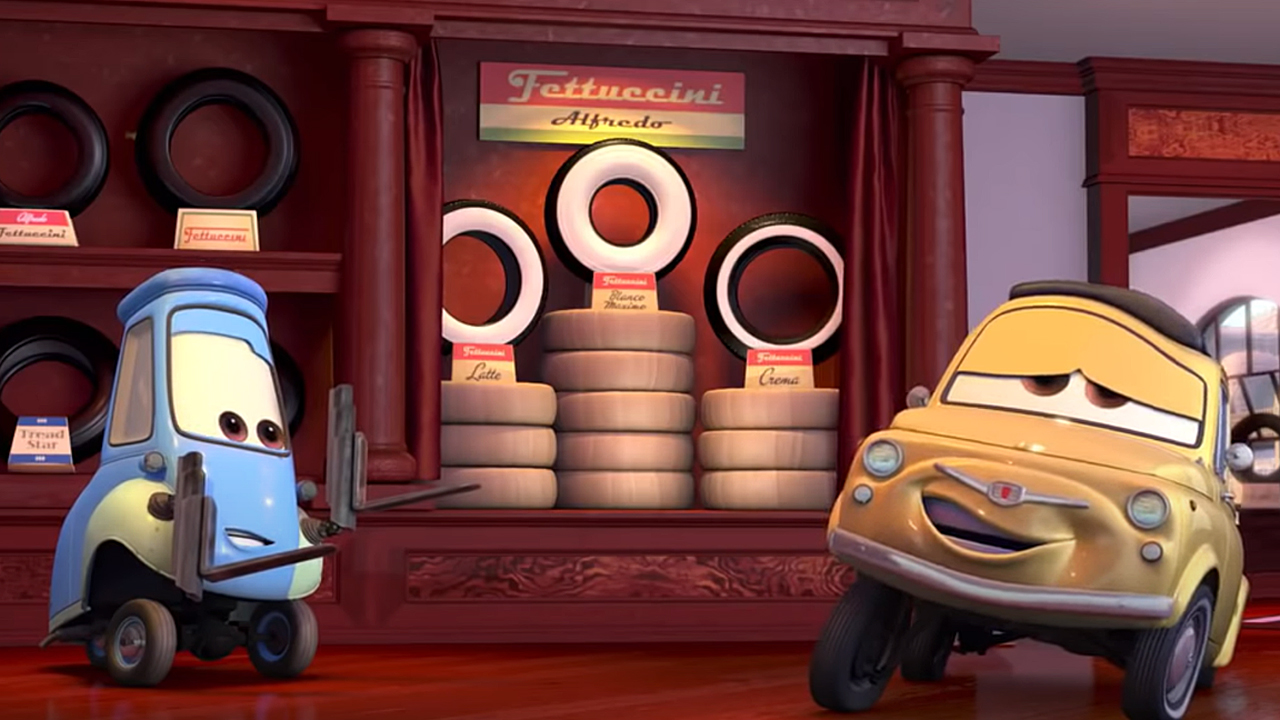 Q: Did you drive all the way back on your spare?

A: Yes. The only issue is that it’s a front tire, and my vehicle does not have a square tire configuration. The rear tires are bigger than the fronts. So, I’m now cruising around on three fronts and a rear tire. Maybe this would be called a “triangle” configuration? 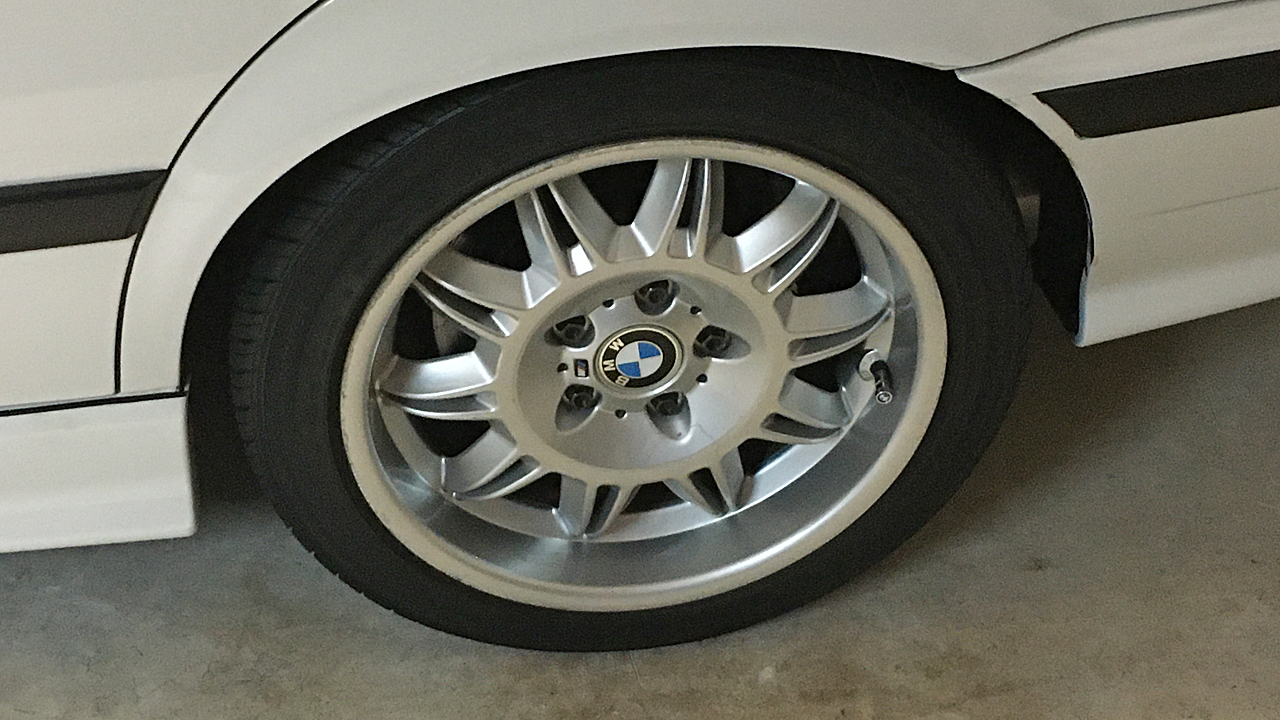 You may notice that I moved the BMW logo center cap from the old wheel to the new one. That’s because I am a man of style.

Q: Ok, enough about you. We must have some stuff to catch up on from GT4, right?

A: Of course! Let’s start with our newest competitor, the Mercedes Tide Pod! 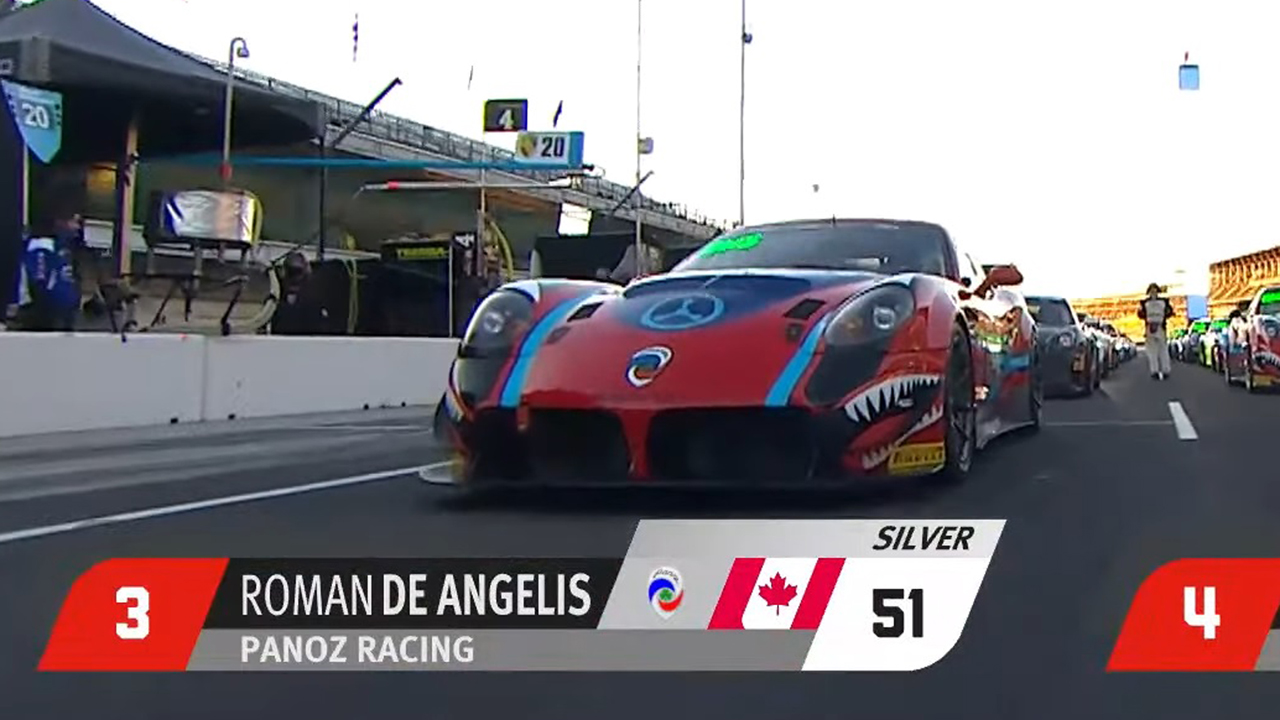 Look at the logos and you’ll see.

A: The Mercedes Tide Pod!

Q: Isn’t that a Panoz Esperante Avezzano with a Galaxy Magnesium logo on the front?

A: Nope, it’s a Mercedes Tide Pod. You cannot convince me otherwise. 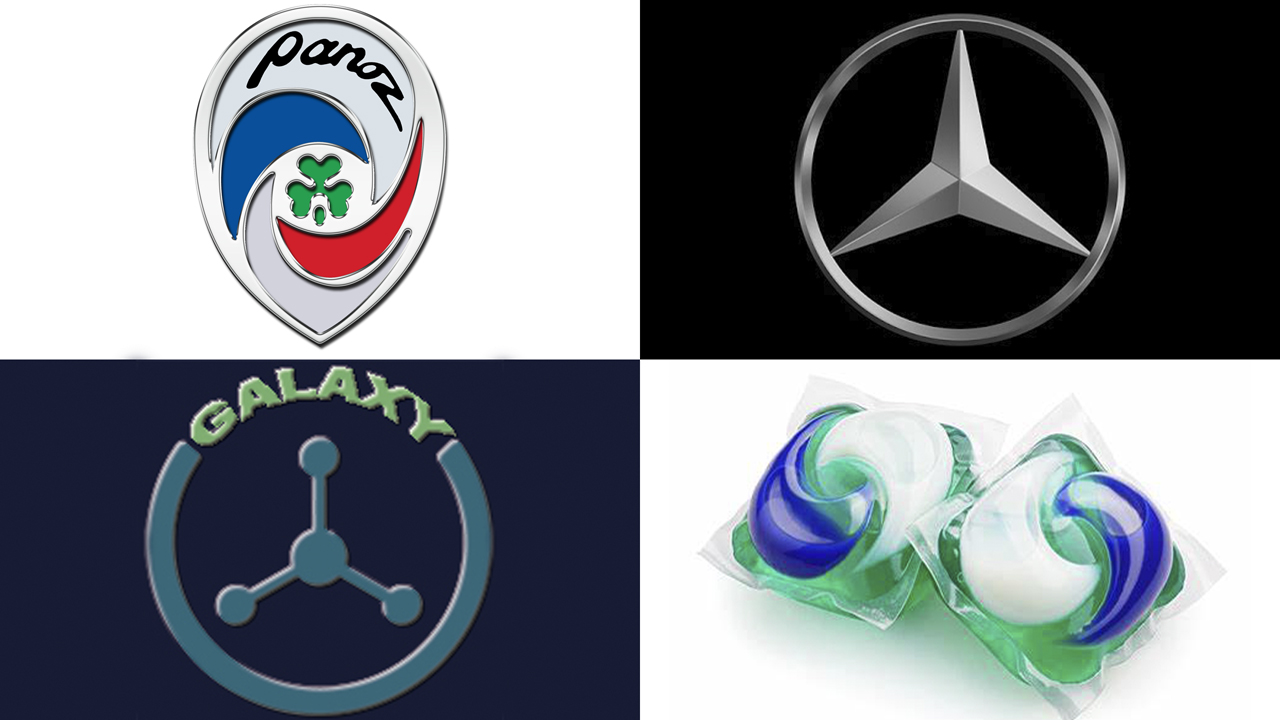 Q: I guess those are pretty similar. How did the Lego car do this weekend?

A: Well, the second Lego car did alright. Marco Polo Motorsports entered a second KTM X-BOW in the Am category, so they did their Am thing in the back. Unfortunately for the original Lego car, their day on Sunday ended early due to an engine fire. 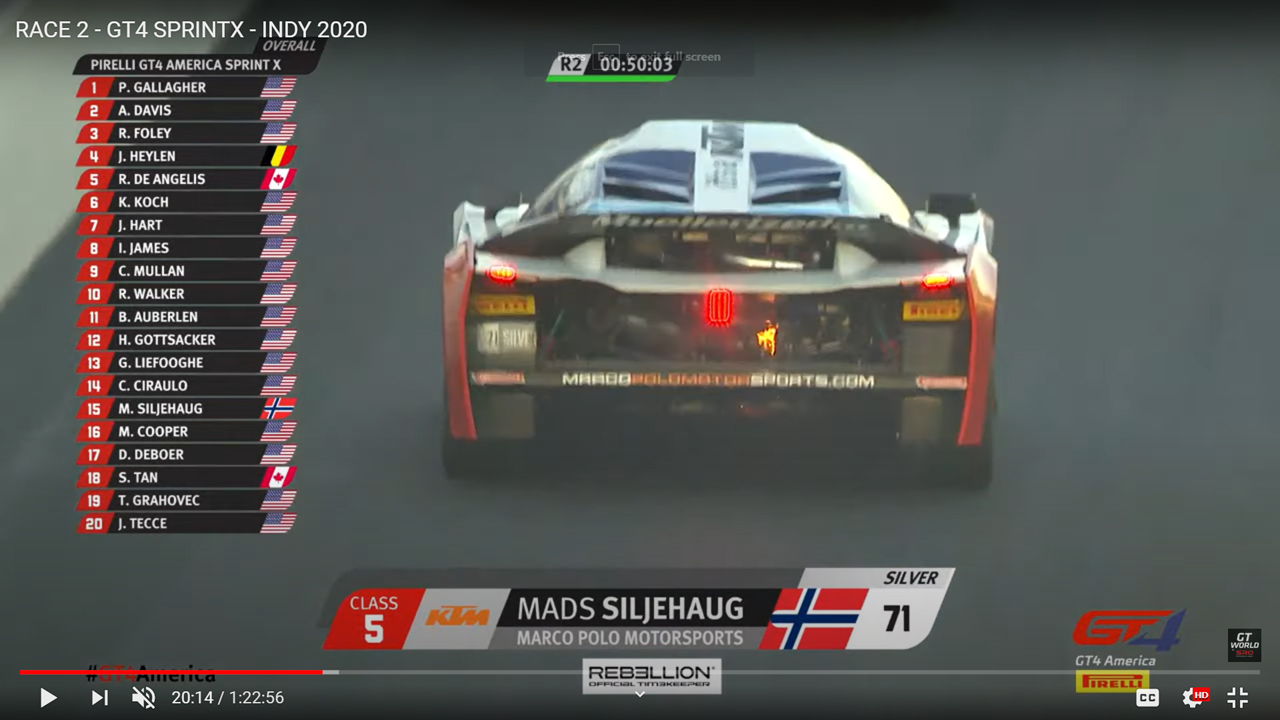 You can find those little flame-shaped pieces in some of the firehouse Lego sets.

Q: How does your dad feel about the end result of the season?

A: I think he’s happy with it. Coming into this weekend, if they finished ahead of the #2 Porsche in both races, they were going to come in third in the points, and that’s exactly what they did. It was a clean weekend and a nice way to wrap up the season. 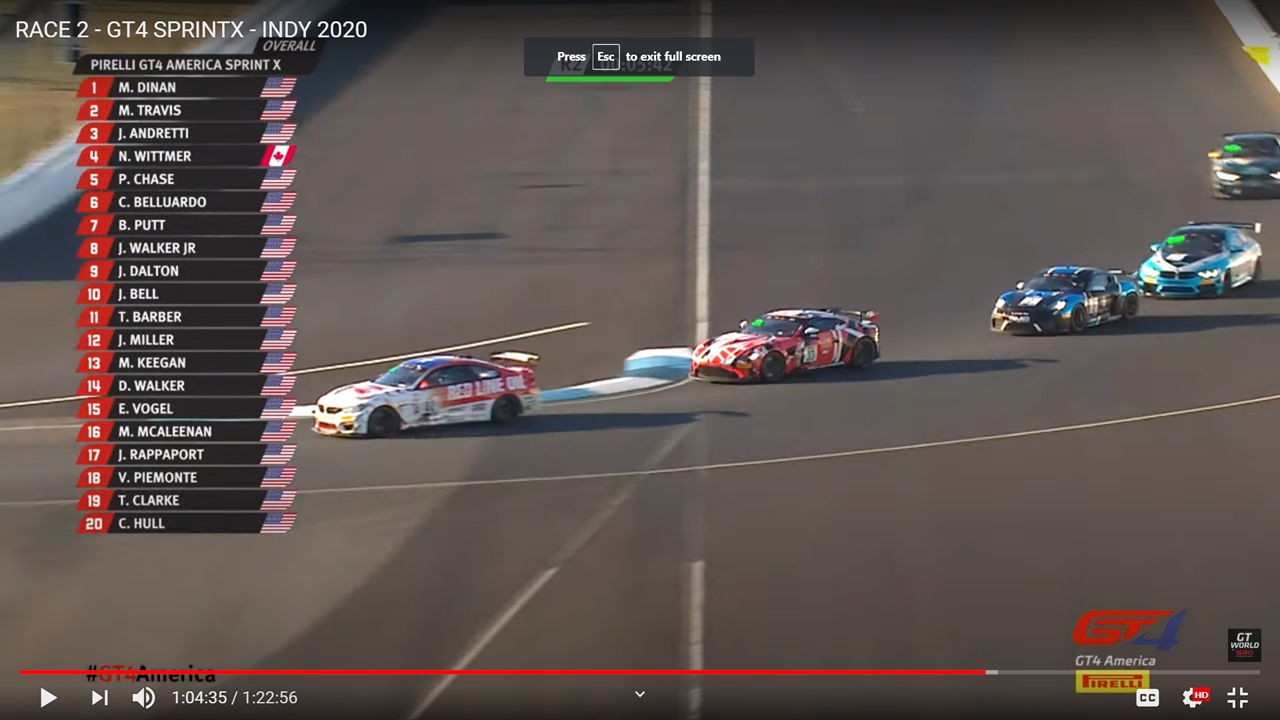 Staying ahead of the blue and black Porsche = good.

Q: Who won the championships? 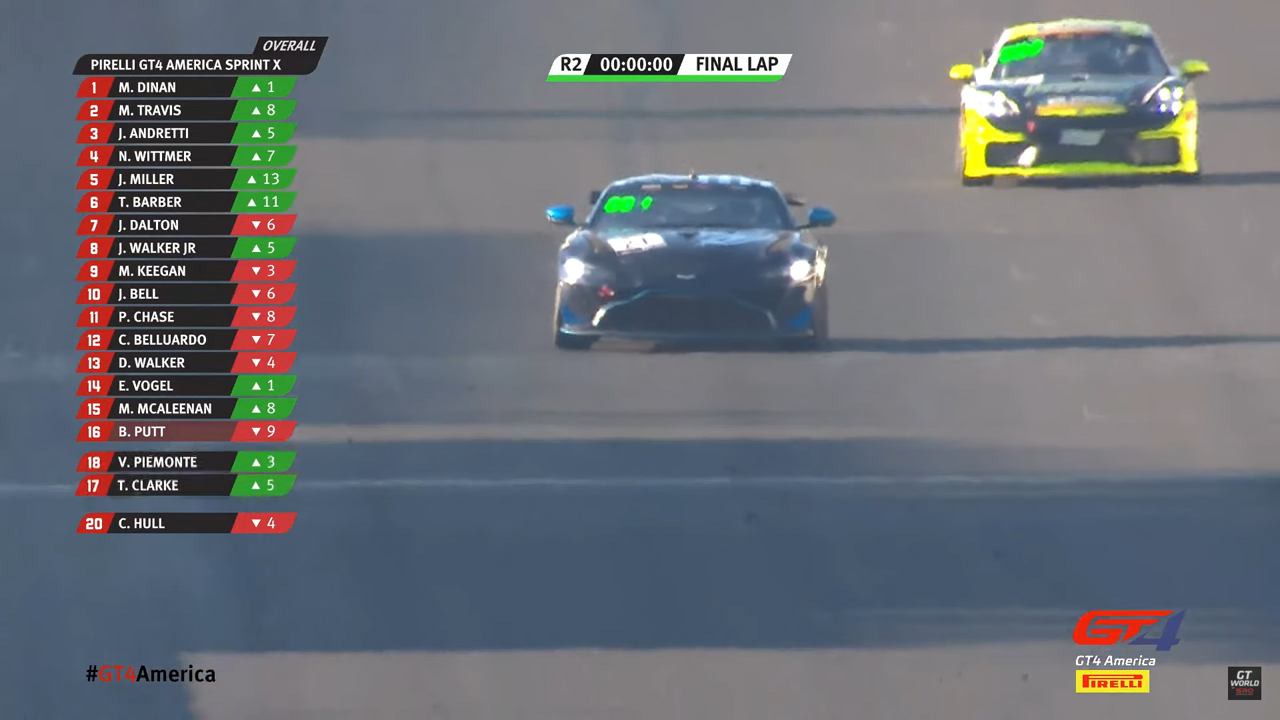 *That term comes from the announcers. I didn’t make it up.

Q: How about the Silver category?

A: Jarett Andretti and Colin Mullan’s McLaren outlasted the #28 BMW driven by Harry Gottsacker and Nick Wittmer (who you might remember from TCA) to win the pro title. That one was also very close: 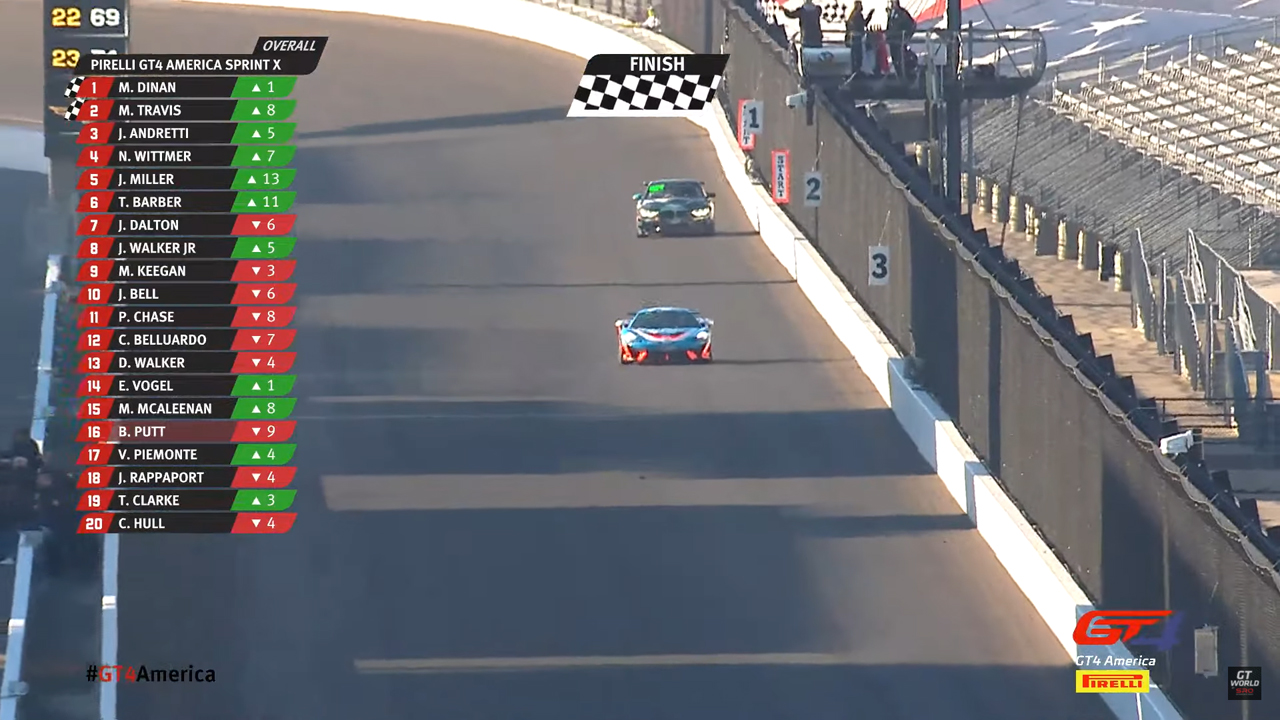 Q: What’s on deck for next year?

A: It’s going to be this series again, which is a good thing. It’s more diverse than Ferrari Challenge and TCR. There’s a good mix of cars and a good mix between pro drivers like ***REDACTED*** and guys who do this: 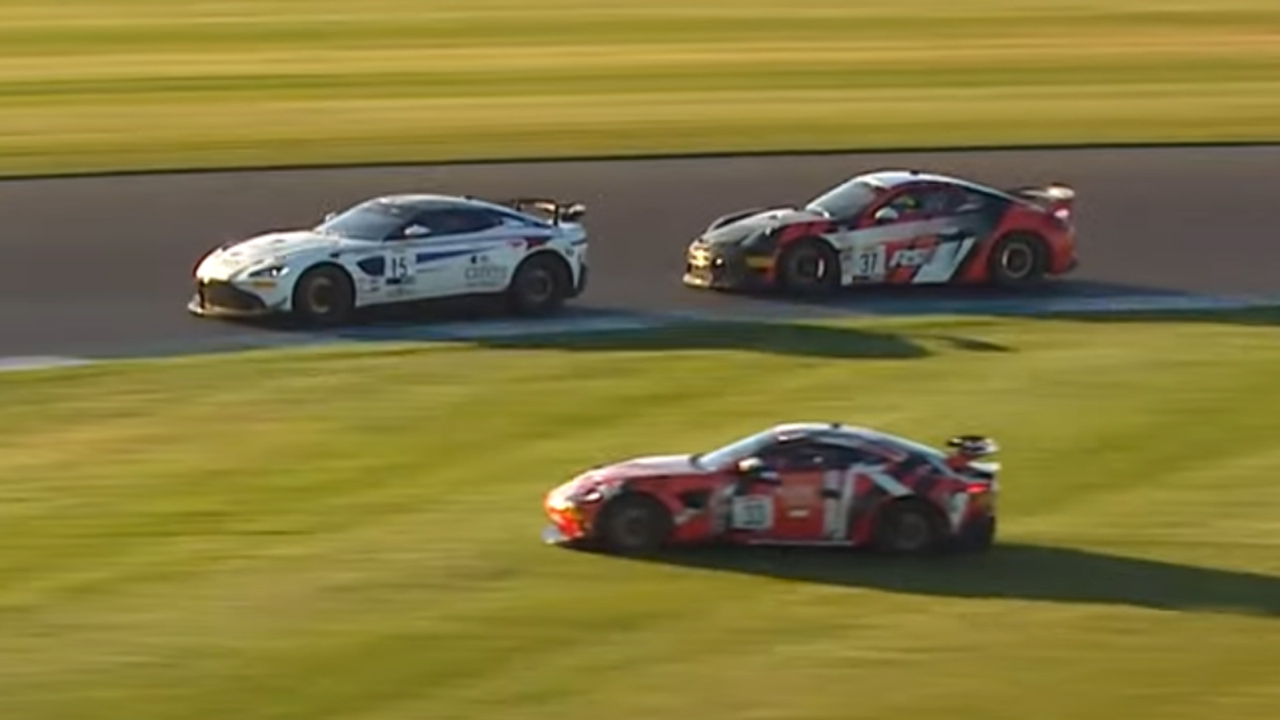 These are most definitely not the track limits you’re looking for.

Q: How did that happen?

A: Not braking soon enough at the end of the front straight. Or maybe it’s Matt Dalton auditioning for a post-racing career as a lawnmower. 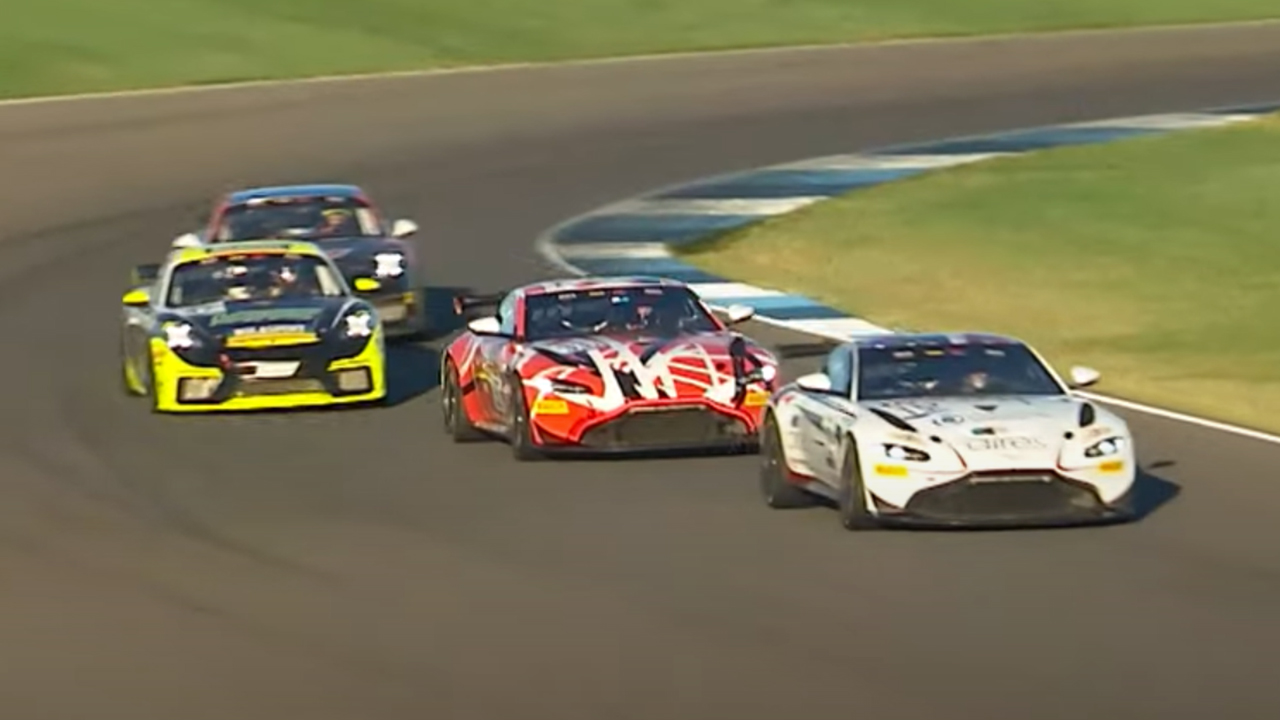 Yeah, there wasn’t enough of this in TCR last year.

A: For the first time since the pre-ChumpCar days, there has been an entire racing season without Hello Kitty Duct Tape! Who authorized that? Hopefully they’ll get on the ball sooner next year and have some in the trailer before Race 1.

Q: Will there be PöRQ Snacks?

A: I hope so. Maybe we can get a PöRQ Snacks/Hello Kitty mashup design on the car next year. Wouldn’t that be fun? I bet we’d get more fans that way.

Q: Most importantly, will there be someone who can fill the shoes of the VW BrosTM?

A: You missed them too? Yeah, it’s not the same without them around the paddock. Maybe we can put some stickers on Ethan’s GTI and send it on track with the VW BrosTM as the driver pairing. That would be fun. 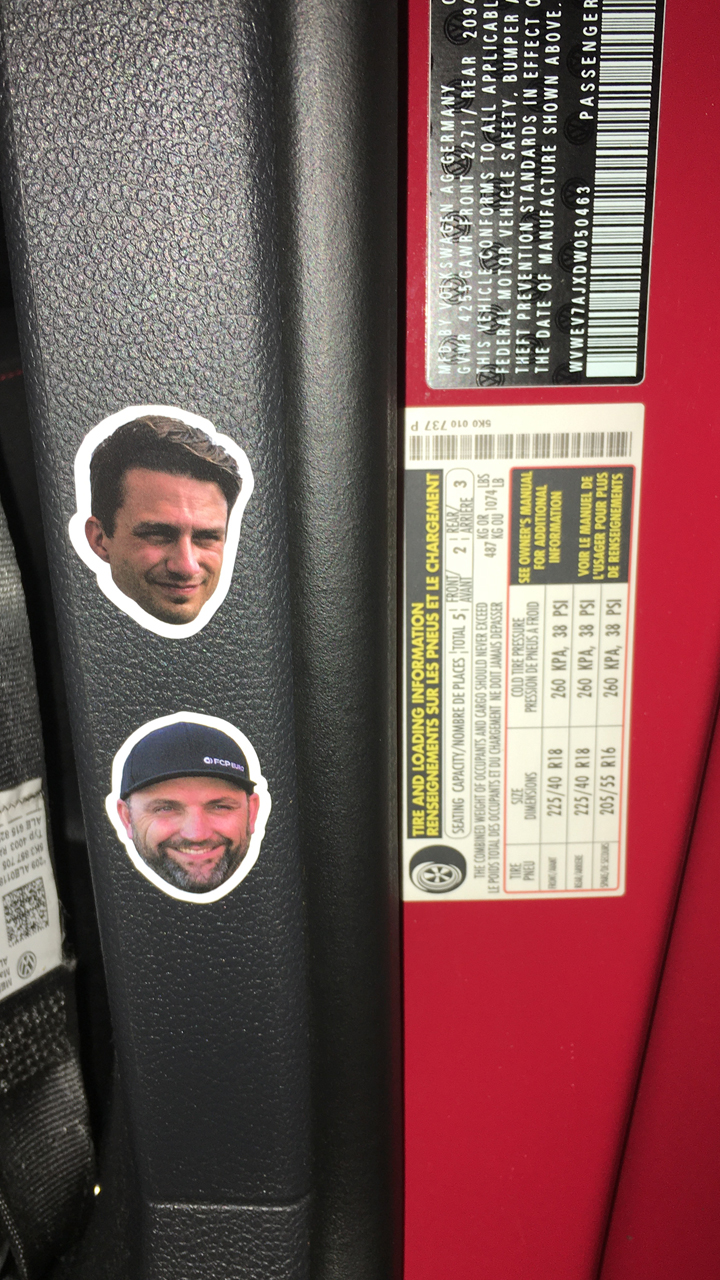 Whatever the crystal ball says for 2021, it should be good. scR motorsports has succeeded on a far bigger stage than it ever dreamed of back in the 90’s, and we’re ready for more. Next year is going to be awesome! 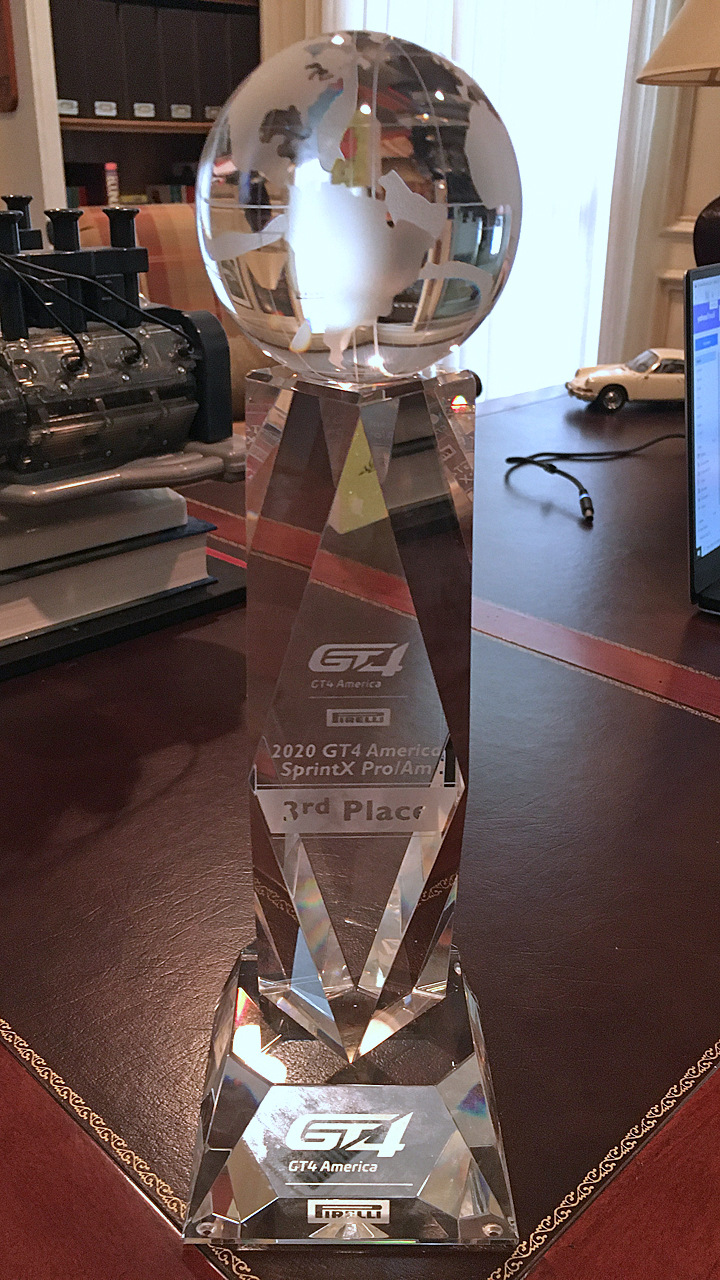 Of course, there’s an actual crystal ball. Nobody ever won a championship by using metaphors.

See you at the track!
ZJW