Space here for Haiku
filled only by its absence.
Sighs of relief abound!

Q: I only got to watch the Sunday race. Looks like another miserable Sonoma weekend.

A: Well, no, not really. But yes. Parts were really, really bad. But parts were actually really, really good. I probably should wait to write this newsletter until I have had a chance to process the weekend and sort it all out, but I am at 30,000 feet and really have nothing better to do. So here we go.

Q: What’s the grand overview? I don’t have time to read all the way to the end.

A: BimmerWorld Racing (BWR) rolled into Sonoma with three GT4 SprintX cars starting in two races each. And our average team finishing overall position was 20th. There’s not really a good way to candy-coat that part of it. 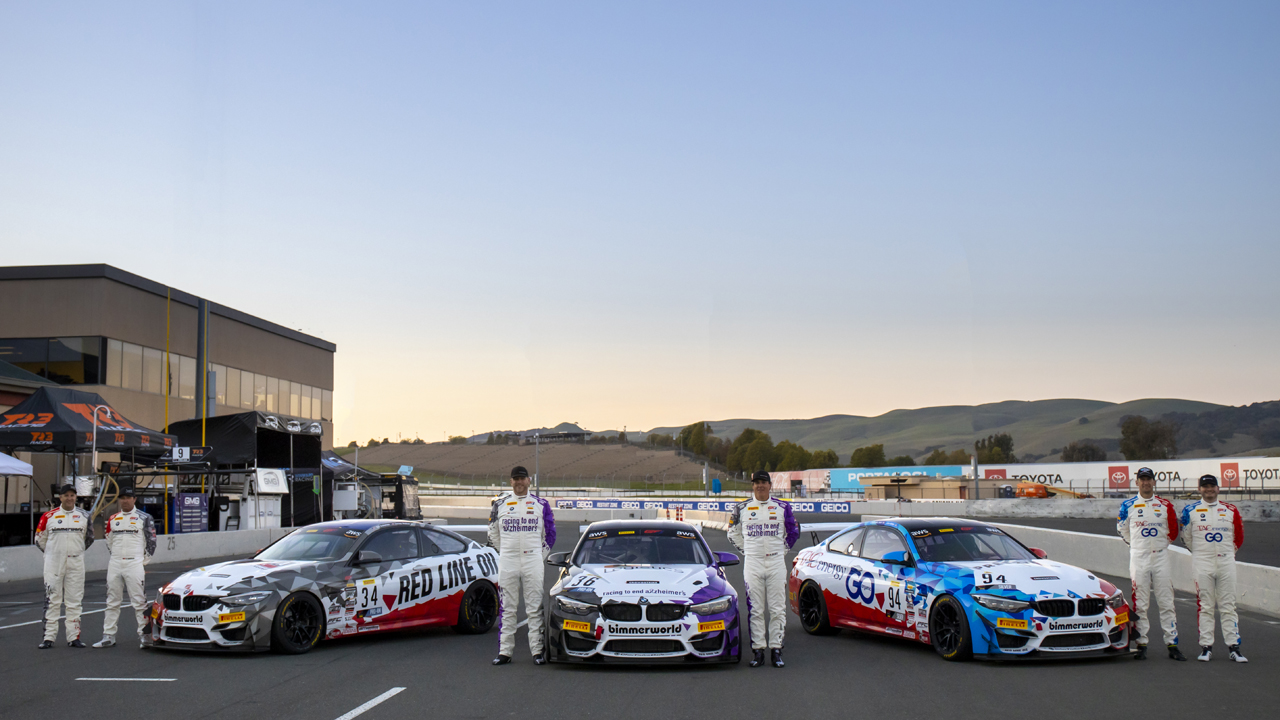 A: Yes. Yes, it is. But the lens though which we view this past weekend makes all the difference. So, in the interest of making this a feel-good newsletter, I think I am going to skip all the depressing stuff and will focus only on the positives.

A: Will you keep reading all the way to the end?

Q: Well, sure. I don’t have anything better to do this afternoon.

A: Excellent. Then let’s talk about Chandler’s hat. Because that’s fun.

You see, most of us in the BWR trailer wear the same black BWR hat. It’s a good-looking piece – part of the official team branding strategy, you know. But that makes it really, really hard to know which hat belongs to each person. I mean, on Saturday Bill swiped my hat as he left the pit box and it took us forever to sort that out. The struggle is real!

But Chandler arrived for the weekend with a solution. I mean, I thought I could combat this issue by taking a Sharpie marker and writing my name inside of my hat. I know you are impressed with the creativity involved in coming up with that idea, but Chandler took the team to a whole ‘nother level by having his name embroidered on the OUTSIDE of his hat. Problem solved. 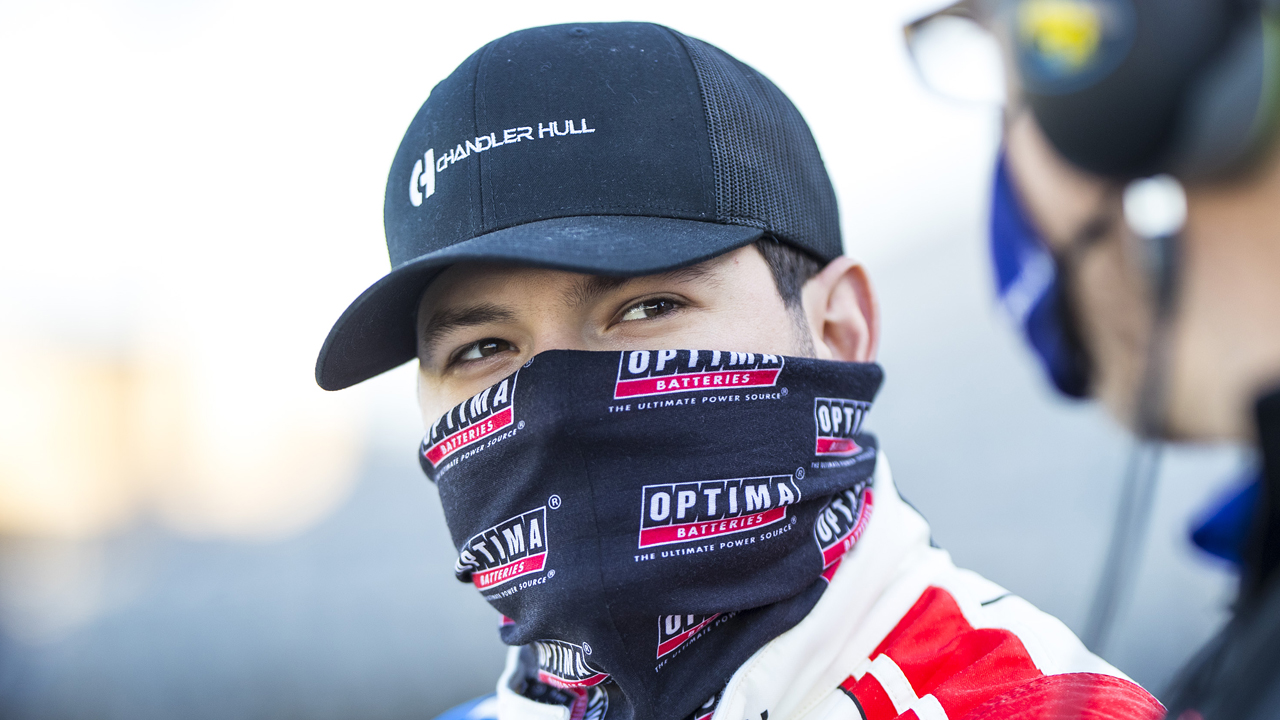 Q: That is the highlight of the weekend? Because that’s pretty weak.

A: Play the hand you are dealt. You don’t want to hear about the races. Just focus on the hat.

Q: How about some cool action shots of the racecar? We have been waiting for those since the COTA teaser.

A: Well, we do have some of those. 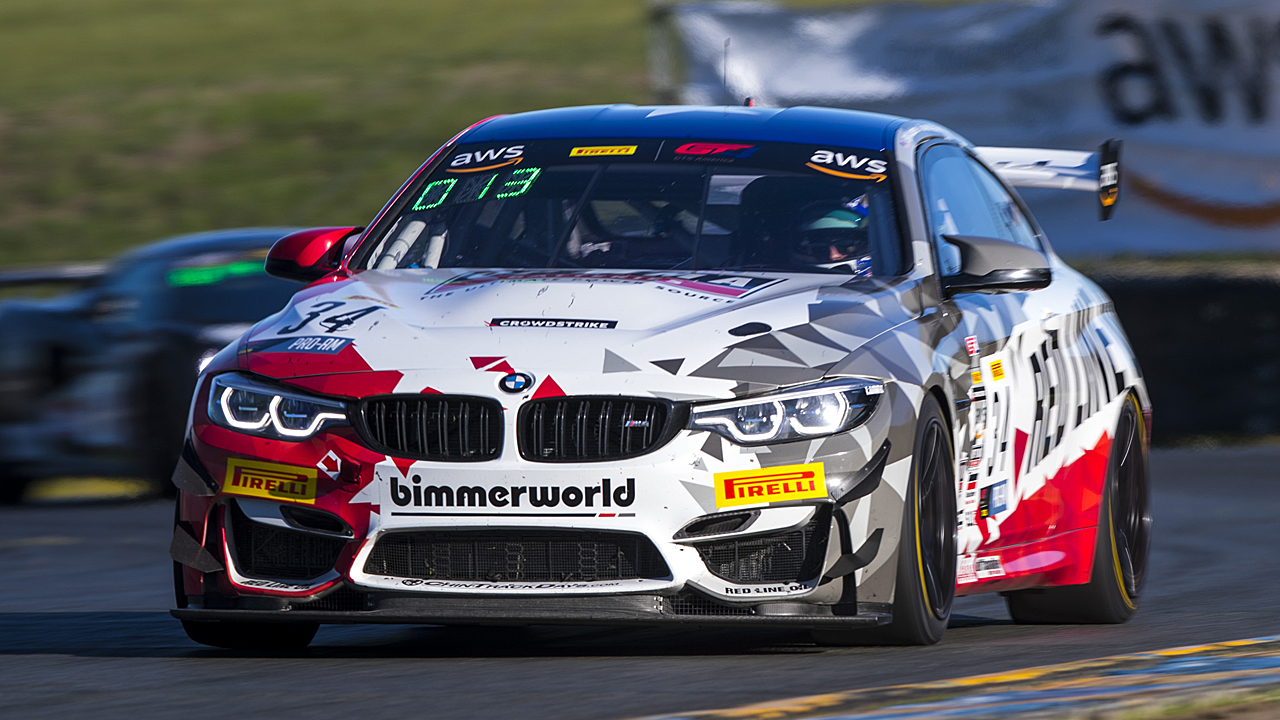 It really is a pretty good-looking car, don’t you agree? Not liking the P13 on the windshield, though.

Q: Without the typical monologue, then, how did the weekend go down?

A: We practiced on Thursday and Friday. And realized we were in great trouble. If you had a Porsche you were in pretty good shape. Ditto Aston Martin. And ditto just about anything other than a BMW.

A: Nah, worse. In qualifying we were more than two seconds off the pole.

Q: Yeah, that’s rough. How about we just look at some more racecar pictures, then? 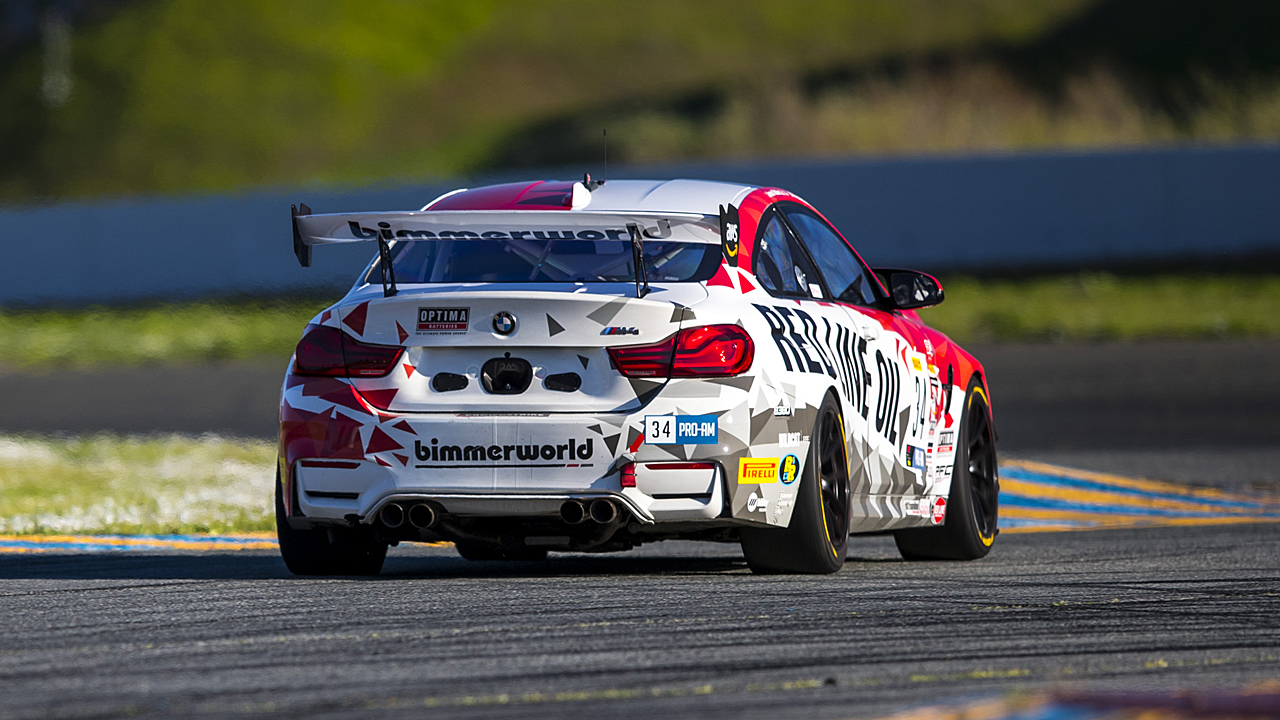 This is the picture taken before the rear bumper got slightly rearranged. Again.

Q: Go off script for a minute. Anything non-race-related worthy of mention other than Chandler’s hat?

A: Sure. On Saturday night a pretty severe thunderstorm blew through the area and turned the awesome BWR canopy into one of those twisted art things you find at a Museum of Modern Art. So that added an extra element of fun to the weekend experience. 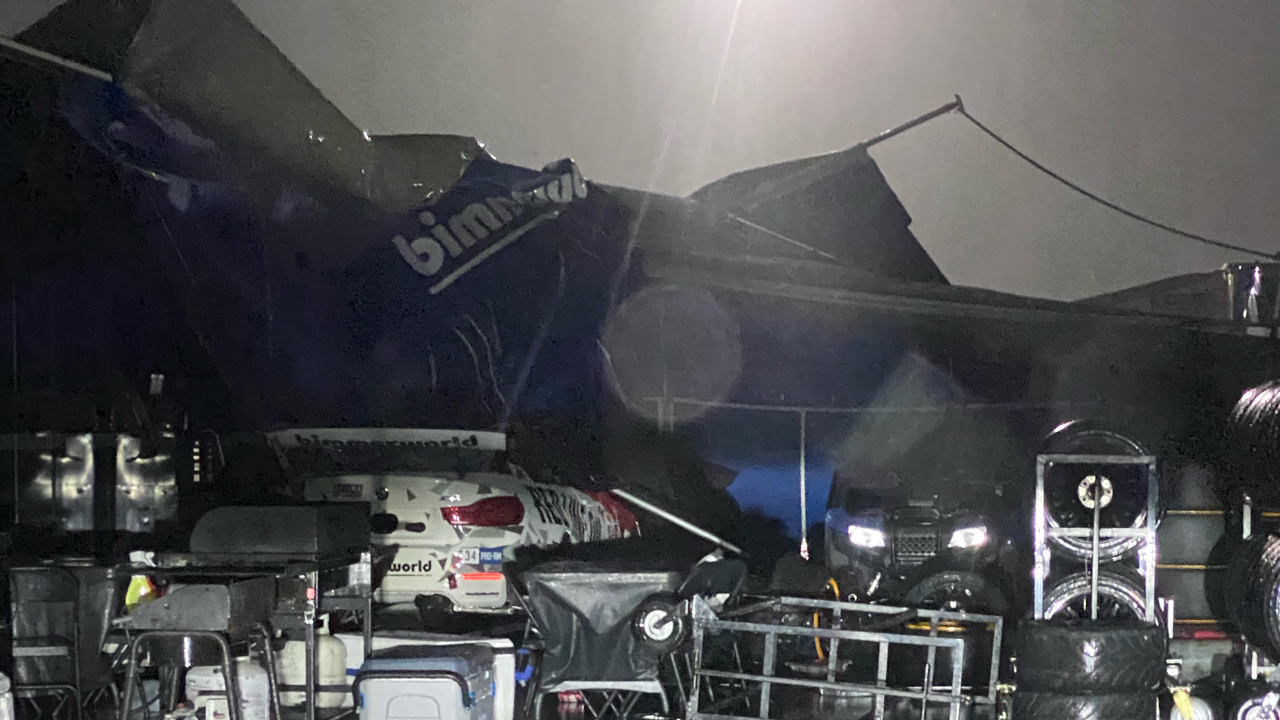 Yes, that’s our car in the middle of the canopy mayhem. Thankfully, it escaped unscathed.

Q: Maybe we should talk racing again. Where did you qualify?

A: In a brief moment of positivity, I set a personal best lap time in qualifying with a 1:48.0. Which was only good enough for 8th in class and 16th overall. Bill was faster with a 1:46.7, but in the stacked Pro field that placed him 12th in class and 17th overall.

Q: Where did the Porsche with the big-feline-on-the-hood-thing qualify?

Q: Maybe you should show up at the next race with a big feline on the hood. Or a Porsche. Just a suggestion.

A: I’m not going to dignify that with a response. But I’ll insert another great photo from Halston here. 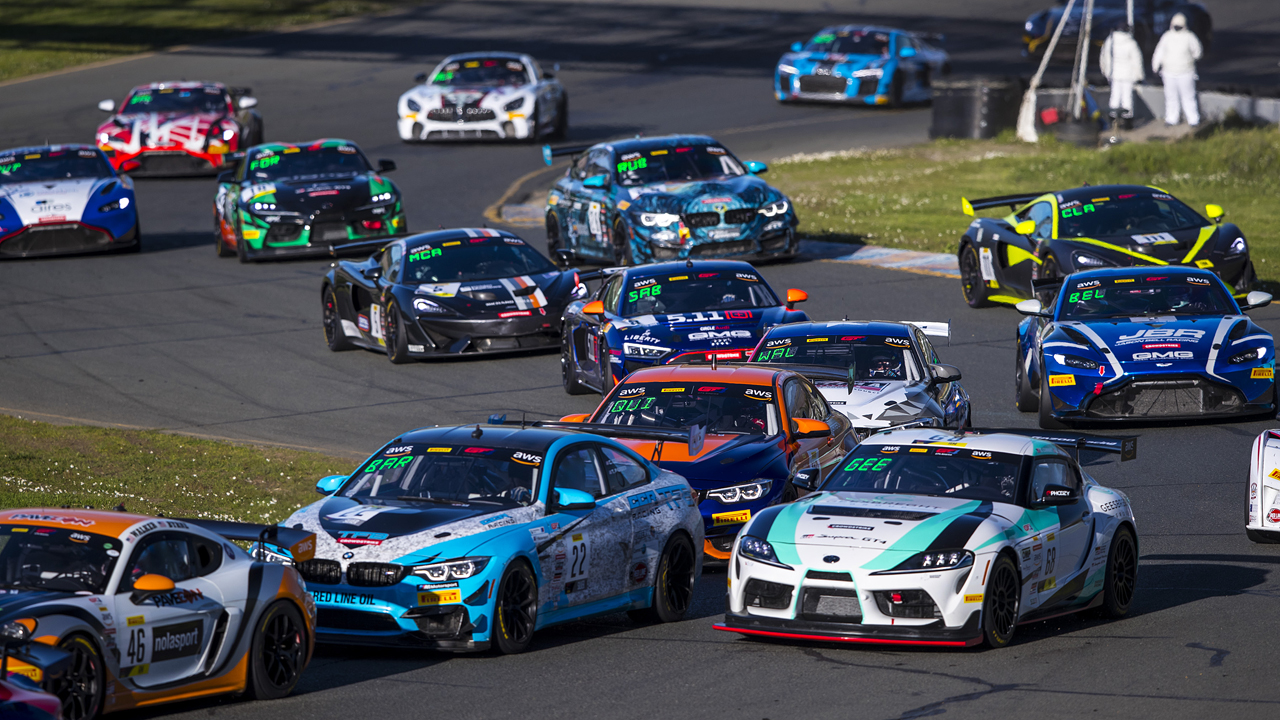 This is the start of Saturday’s race. I’m in there someplace. Honest.

Q: How did Saturday’s race end up?

A: In fact, it was a great result. I really need to emphasize that we ran an awesome race on Saturday, even if we were completely outgunned.

I had a fantastic start if I do say so myself, and managed to work by three cars on the first lap. Those 45 seconds were probably the highlight of my entire weekend. From that point on I moved up another spot or two, handing off to Bill with the car 6th place in class and 12th overall.

Bill motored forward, took advantage of others’ misfortunes, and in a very quiet but intentional way moved us up to finish 4th in class and 7th overall. Which was simply remarkable given our pre-race expectations. There was nothing particularly heroic or stunning about the race – it was just an error-free performance by all in the paddock who were involved in getting #34 to the finish line.

Q: I hope you celebrated this somehow.

A: We sure did. Nick broke out a case of PIiny the Elder (if you know, you know) and some locally-sourced beef jerky. I’m really getting to like Nick. I think we can keep him, partially contingent on him bringing more Pliny. 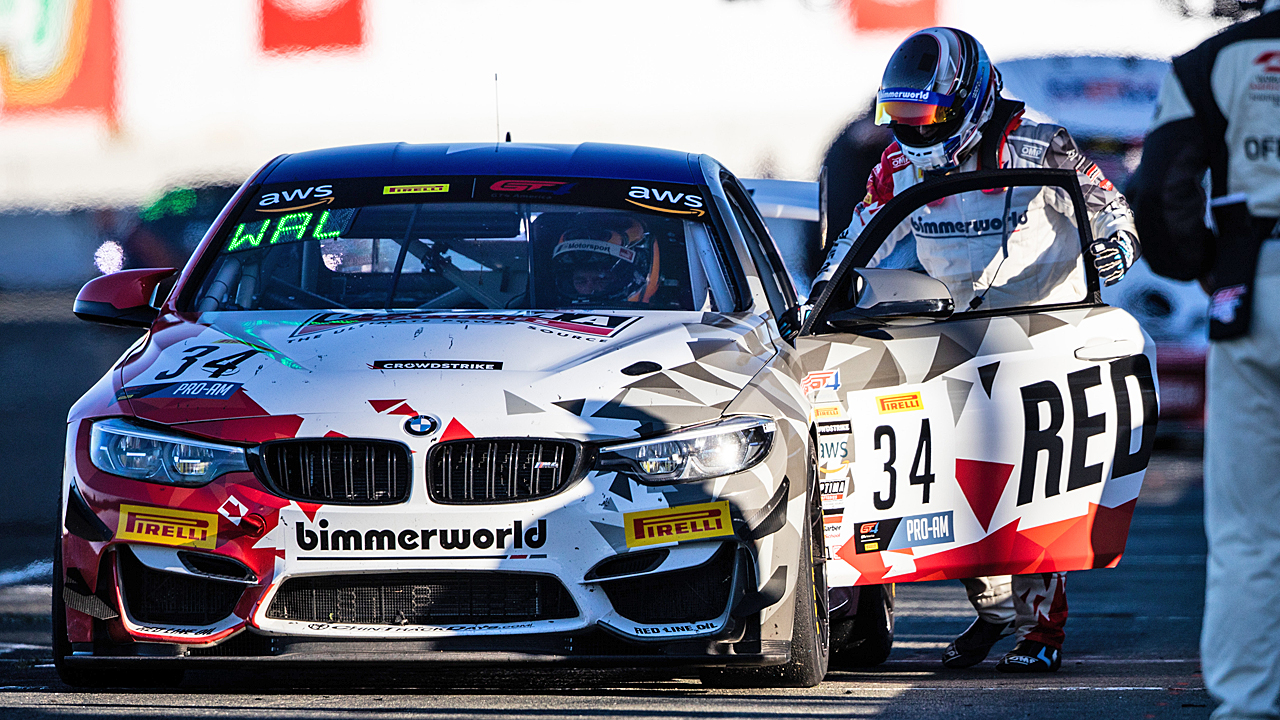 Handing off the car to Bill Auberlen. Which is now a normal thing.

Q: Did Sunday really throw a damper on things?

A: Unfortunately, yes. Bill was able to pick up four or five positions in the first lap or two, but contact with another competitor jacked up (a technical term) the left rear corner of the car. The car suddenly sucked more than the typical Sonoma suck. This resulted in Bill losing all of those hard-earned positions before handing off the car to me with 25 minutes to go and simply saying, “Good luck with that!”

I didn’t have good luck with that.

It was all I could do to keep the car from ending up in the dirt, in the grass, and in the wall. Dirt and grass really don’t bother me much, but walls are a different story (still suffering from St. Petersburg PTSD, perhaps). And there are a lot of walls at Sonoma.

One by one, and sometimes three by three, #34 fell victim to the 573 cars behind us. I might be rounding up there, but you get the idea. Mercifully we didn’t finish in last place, but that’s about what it felt like. So, let’s stop talking about it now.

Q: Didn’t I see you get lapped at the end by the Porsche with the big-feline-on-the-hood-thing?

A: <this space intentionally left blank> 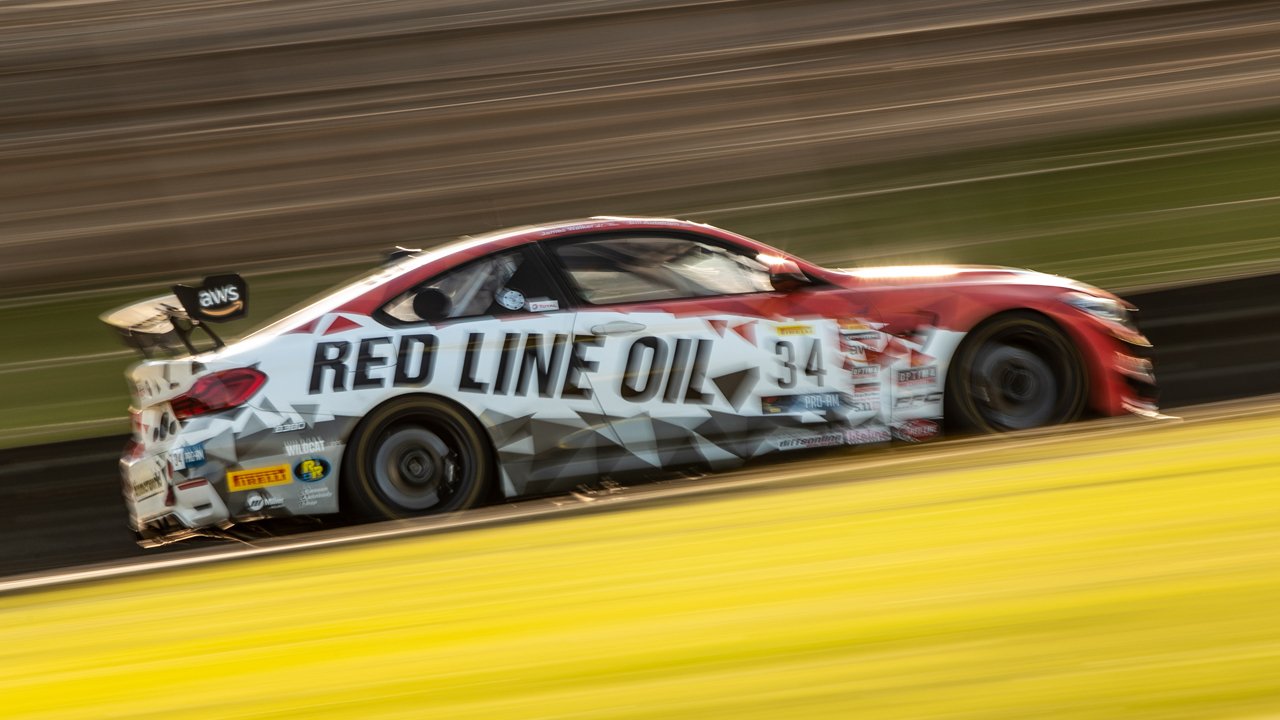 This shot courtesy of BMW Motorsports.

Q: Can you summarize the entire team’s results? There’s a lot to keep track of here.

A: Sure. I’m an engineer, so how about a table of data?

Q: Those tables reek of drama.

A: Oh, we had plenty of team drama. Qualifying infractions, drive-through penalties, broken suspension bits, and three racecars that were rubbed on a little too hard. By all accounts, it was a difficult weekend. But it’s Sonoma. And that’s all there is to say about that.

Actually, that’s not all there is to say about that.

Save for our unfortunate contact in Race 2, I am really, really proud of our team’s performance. The car was solid (solid, by the way, is James Clay’s favorite word), the new team members congealed immediately, and we were faster than last year. David and Wayne engineered a car that was able to put us where we needed to be to take advantage of others’ misfortunes. And as a result, we left Sonoma in 7th place overall with 14 points towards the Championship.

As a point of reference, after our first race of the 2020 season at COTA, we found ourselves in 12th place overall with 4 points towards the Championship. This is what is known as “improvement” and “reason for continued optimism.”

Q: And you didn’t pee on your balaclava this year?

A: And I didn’t pee on my balaclava this year. 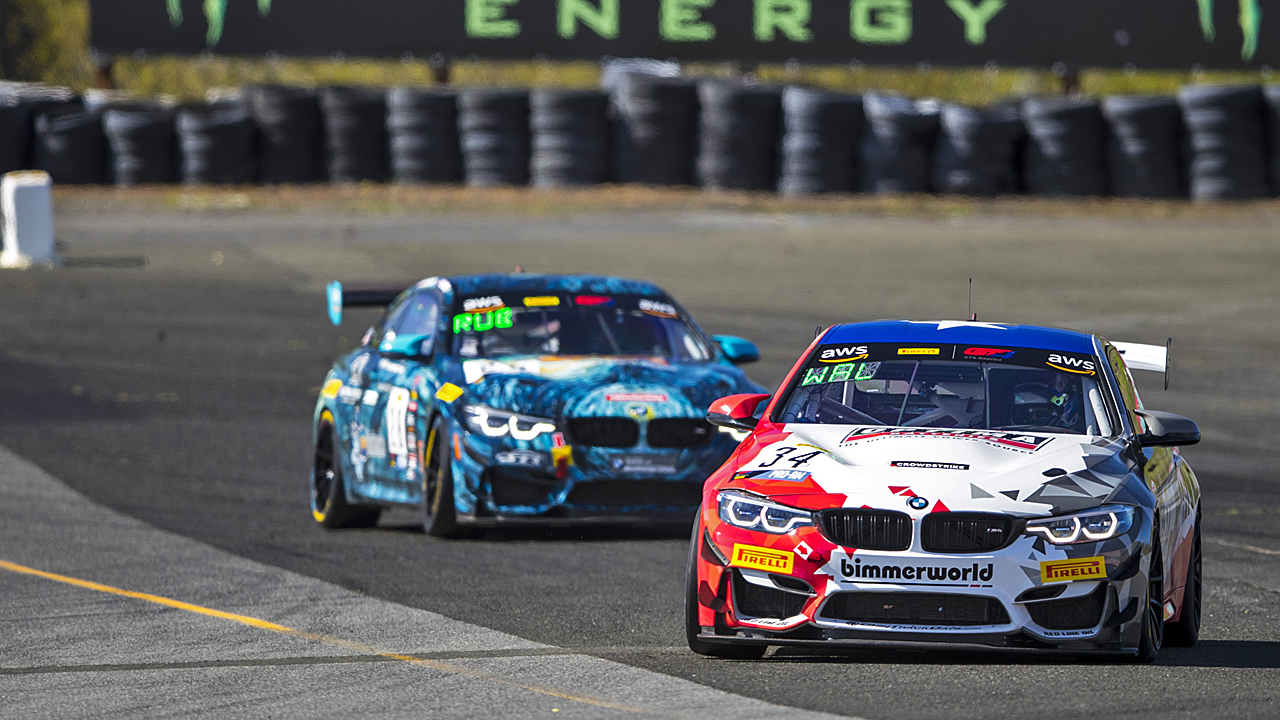 Welcome to the SprintX grid, Joe. It’s good to have you “back” there!

Q: Any updates moving forward? What’s up next?

A: COTA will be our next sortie on May 1-2. Rumor is that you can actually “buy a ticket” and “be a spectator” although I believe that “spectator” status will not allow you to come visit with us in the paddock where all the fun happens. But track is open for business and we would be flattered if you thought enough to cheer us on from the stands next month in Austin. I’m staring at you, Jason Arcemont (and about 100 others).

Caveat: I just checked and I don’t see any place on the COTA website to buy tickets for the race. So maybe I’m getting your hopes up incorrectly. It says on the GT4 America website that you can buy tickets for the event. So, I guess I’m just confused. They are selling tickets for a rugby tournament at COTA, though, in case that sort of thing appeals to you.

Because of the international travel mayhem caused by the virus, our third event of the 2021 season, Mosport, has been canceled. Apparently, the entire country of Canada is closed for business coming in from south of the border. As of this newsletter we still don’t have a replacement lined up, but that could change on a moment’s notice. So, stay tuned.

And just because change is a good thing, the date of our VIR event has moved from June 12-13 to June 5-6. All of these updates should eventually make their way to the team website. At which point it will all change again, but that’s the world we live in these days.

Q: Last question: What happened to the Haiku?

A: As the really strange guy sitting next to me on the plane (who was apparently reading over my shoulder as I wrote this) said to me, “If you have to think too hard about Haiku, it isn’t meant to be. It can’t be forced. It should be organic.”

You can all thank the really strange guy separately. 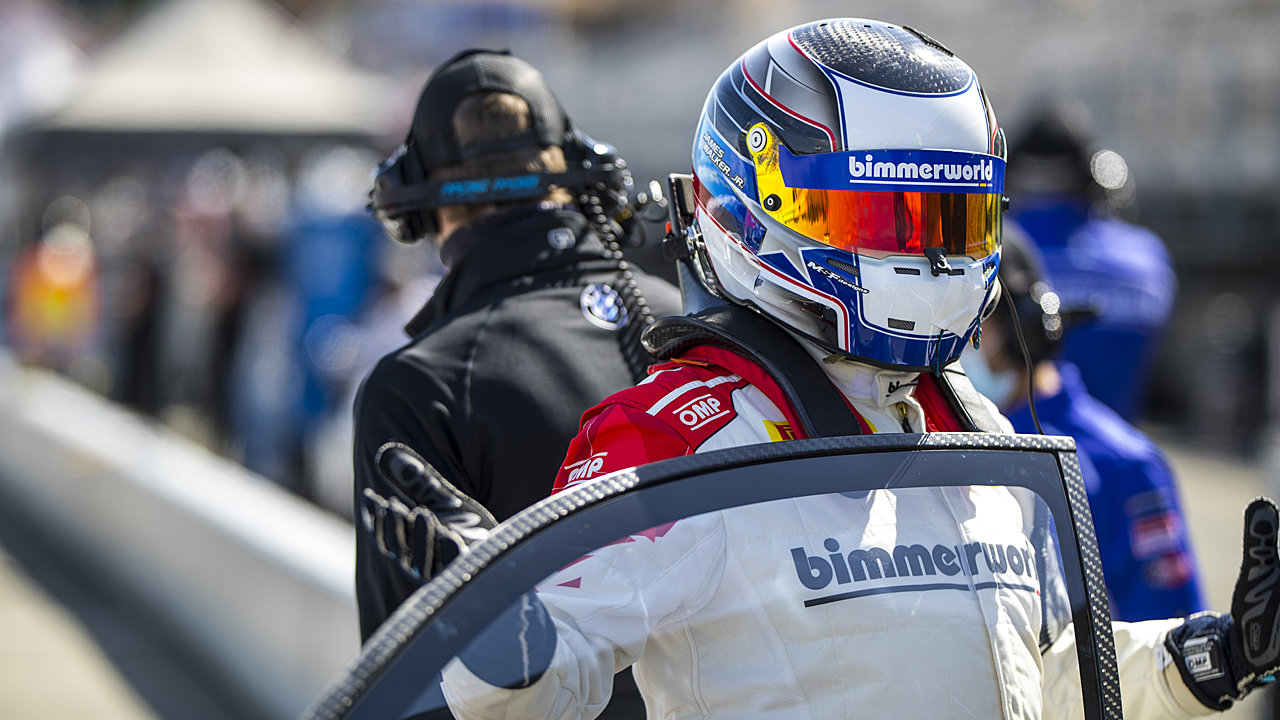