In the spirit of full disclosure, I have been sitting at my keyboard here for the better part of 30 minutes here clicking through the newsletter archive trying to figure out how to launch into our 2022 GT4 SprintX season-opening monologue. And I can’t figure out anything suitably witty or properly entertaining. So, without resorting to haiku (I promised several people that 2022 would be a haiku-free zone), here’s a picture of the new car for you to stare at while I continue to chronicle and digest the totality of the scR motorsports narrative on the eve of its silver anniversary. 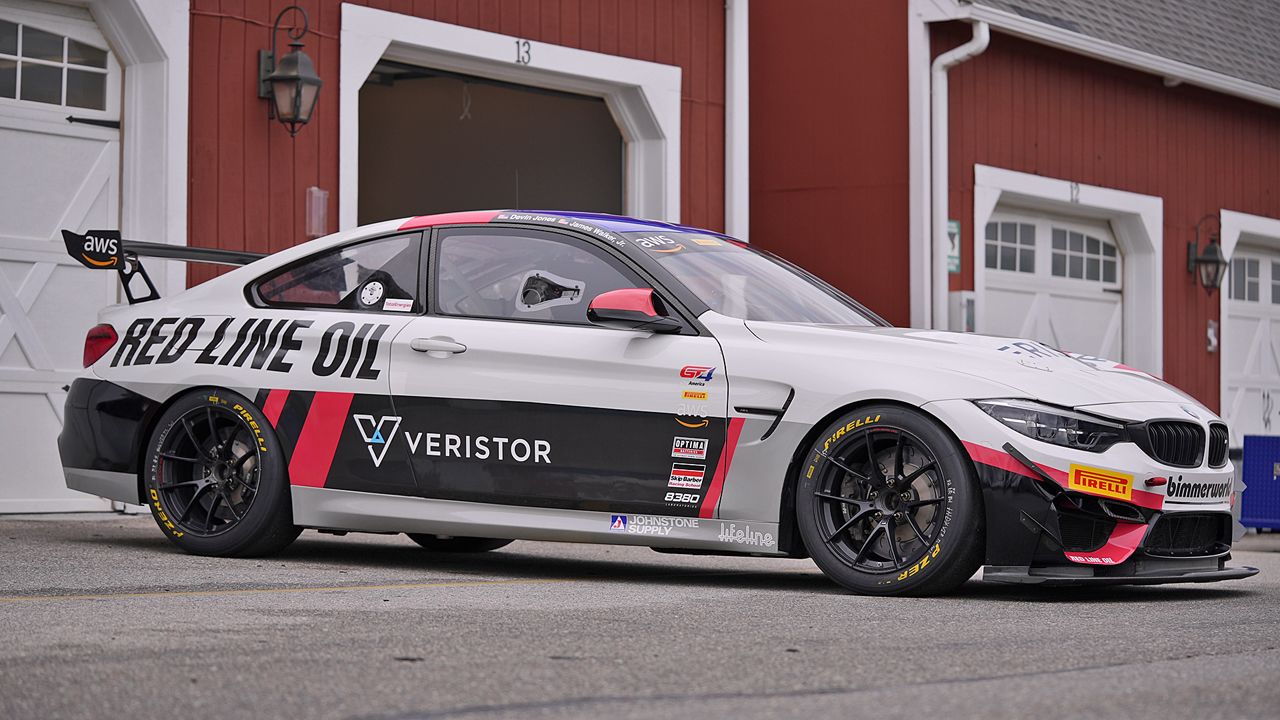 A: Crap, you figured that out on your own. Because we kicked off this folly in 1997, 2021 was indeed the 25th season of scR motorsports. And I sort of dropped the ball on making a big deal out of that. Oops. But to be fair I really didn’t do much track stuff at all in 2006, so with that little bit or rationalization, we’re just going to pretend that 2022 is our 25th time through this drill, ok? If you play along, maybe we will make T-shirts or something to celebrate later in the year.

Now, in a fun bit of random racing intersectionality, BimmerWorld was also founded in 1997. Coincidence? I think not. But I’m surprised in retrospect that James Clay didn’t make a similar big deal out of his company’s 25th anniversary last season. He normally celebrates obscure things like Cinco de Mayo with discounts on parts and accessories (but notably, not race support fees), so how he missed this obvious opportunity for a marketing splash is beyond me.

Q: Isn’t it now time for your annual reflection on past accomplishments and successes?

A: Would I ever miss that opportunity?

Over the past 25 years, I have somehow convinced Dana to let me compete in 155 sanctioned road racing events. Now those aren’t Bill Auberlen numbers, but that’s a lot of green flags for an amateur driver with a day job and a family who expects him to be semi-present from time to time. While I have not yet compiled a full listing of all the finishing results (that’s a task for the next rainy day), I am pretty confident that there are 14 class wins in there, with podium finishes more than tripling that number. Along the way, I have had the pleasure of taking the wheel of something like 13 separate racecars and remain so thankful for those who have graciously let me play with their toys on track.

Most importantly, this effort has culminated in the creation of 112 unique newsletters (all now online for your reading pleasure) and a mailing list made up of nearly 400 irrationally interested fans and followers (congratulations, you fall into this category). We have come quite a way since that first SCCA regional race at Indianapolis Raceway Park, but I’m still kind of amazed that SRO hasn’t picked up the rights to repost some of this material. 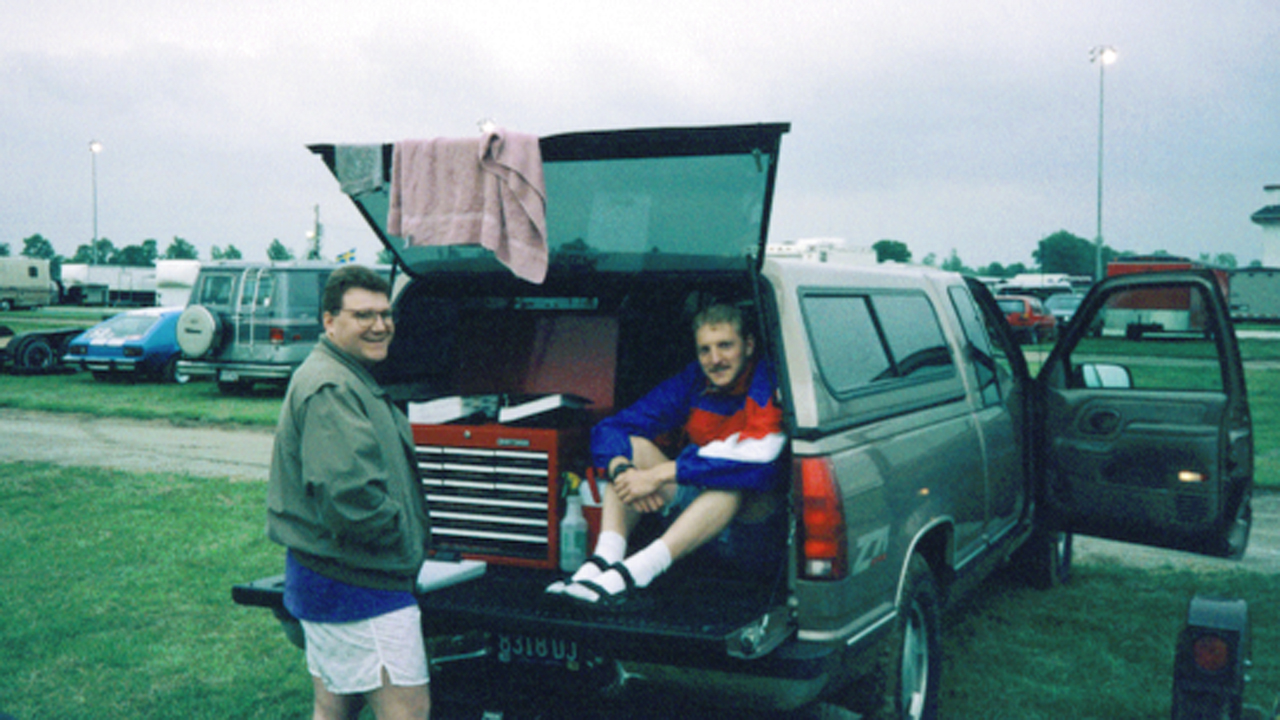 Q: Roughly how much have you spent on these shenanigans during these 25 years?

A: Did Dana put you up to asking that?

A: Well, for my own personal safety I will remain silent. But I can truthfully answer at least $100. It might have been more. But she has my credit card and knows a great jeweler, so we manage to find equilibrium on this topic. At least occasionally. 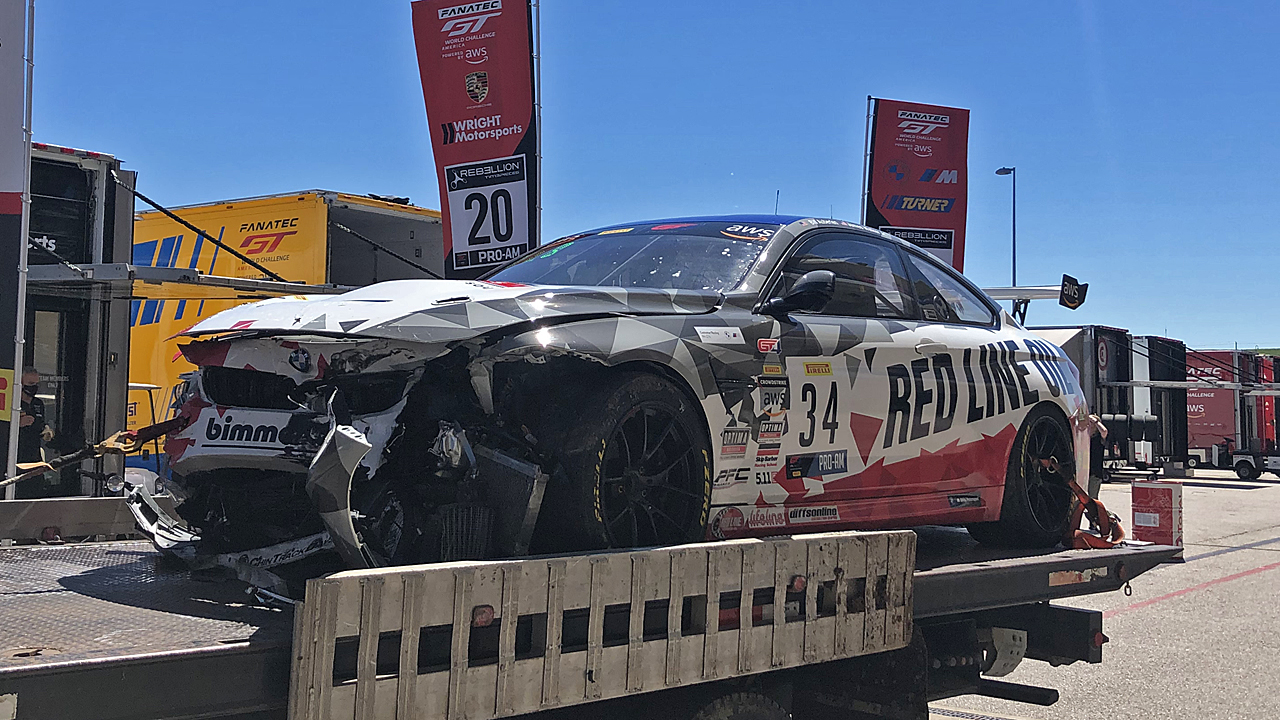 You are looking at one bracelet and one pair of earrings in DEUs (Dana Equivalency Units).

Q: I suppose you’re now going to predict a championship in 2022?

A: Well, that would be kind of ostentatious. Sort of like Babe Ruth calling his shot in 1932. And I’m not Babe Ruth. But if not now, when?

Q: So, that’s your goal? How original. Isn’t that every team’s objective?

A: Not exactly. Although if everything else goes to plan, that’s how it should play out.

A: I’m so glad you asked. Let me introduce Devin Jones, our 2022 GT4 SprintX co-driver. I’ll even include a picture of him here. 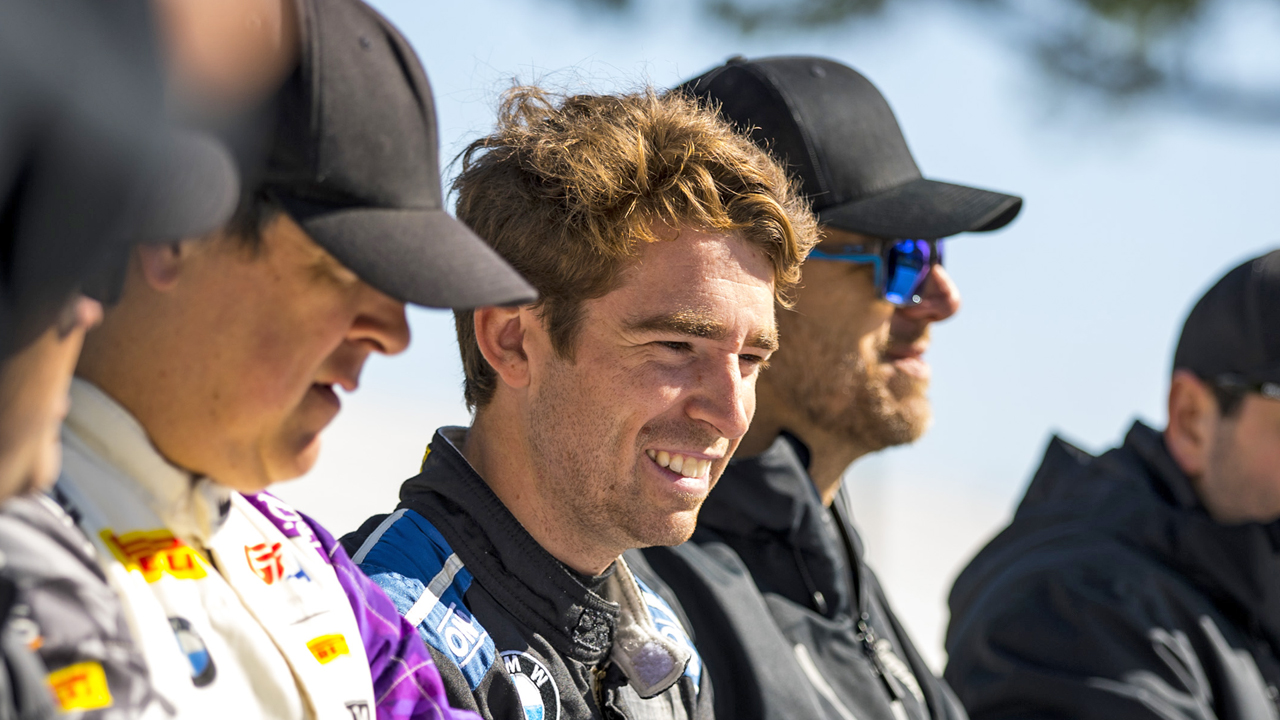 Not the most flattering picture of Devin, but it’s all I could find on short notice.

As you might remember from our 2021 Indy 8-Hour newsletter, Devin and I shared a GT4 car last October. It was his first time back in a racecar since the big wreck of 2020, and his solid performance paved the way for a 2022 driver pairing that should have the entire SprintX Pro-Am grid alarmed. Or at least slightly bemused.

Q: I thought that the racing world had written him off like Doc Hudson after his big wreck in 1954.

A: Exactly. And that brings us to our singular goal for 2022: Make Devin Great Again! We are so serious about this, we are making hats. Order yours today and wear it with conviction. A dedicated website is certain to follow. If SportsCar365 doesn’t pick up on this season-long storyline, shame on them. 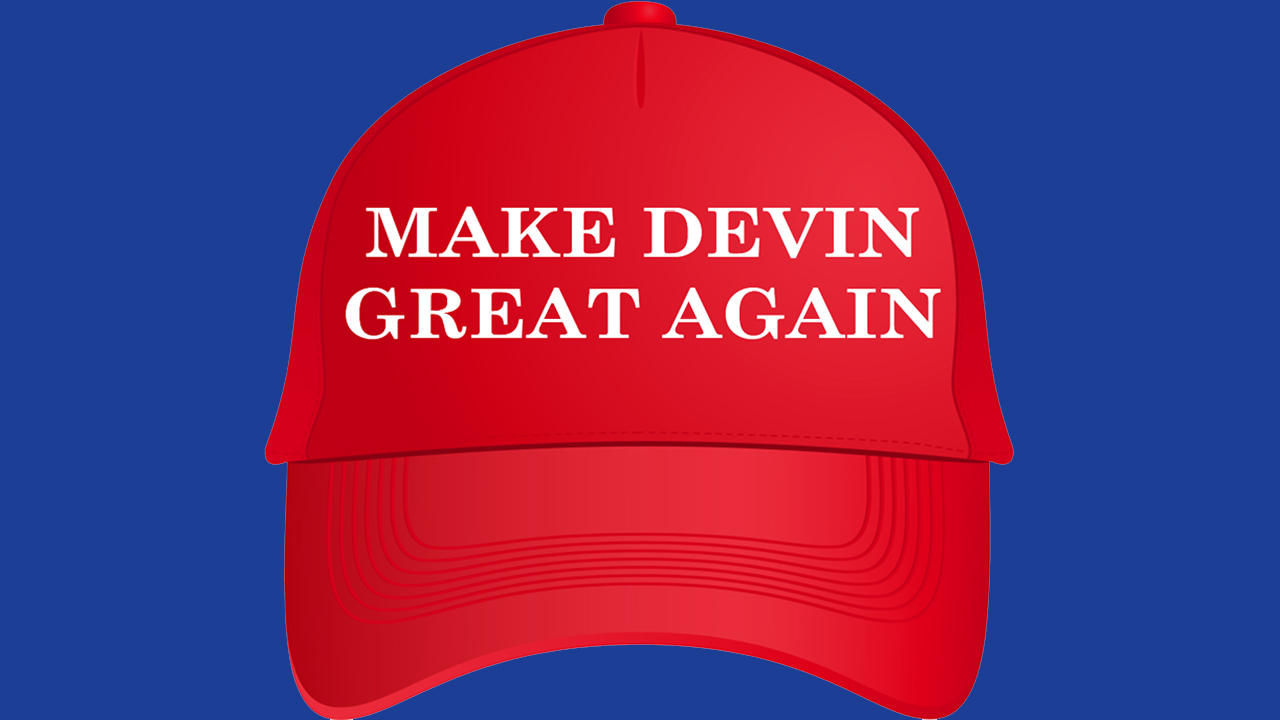 Q: So you and Devin are sharing a BMW M4 GT4 in SprintX? Is that what I’m hearing?

A: Exactly. Teamed up with BimmerWorld for a third straight season, we really don’t have any excuses left for not being successful. Don’t get me wrong, I loved every single minute of racing with Bill, but this shuffling of the deck may just be the jolt we need to move to the front of the field. Bill will still be hanging out in the trailer to drop the occasional golden nugget in front of us, but it’s up to Devin and me to get it done on track. 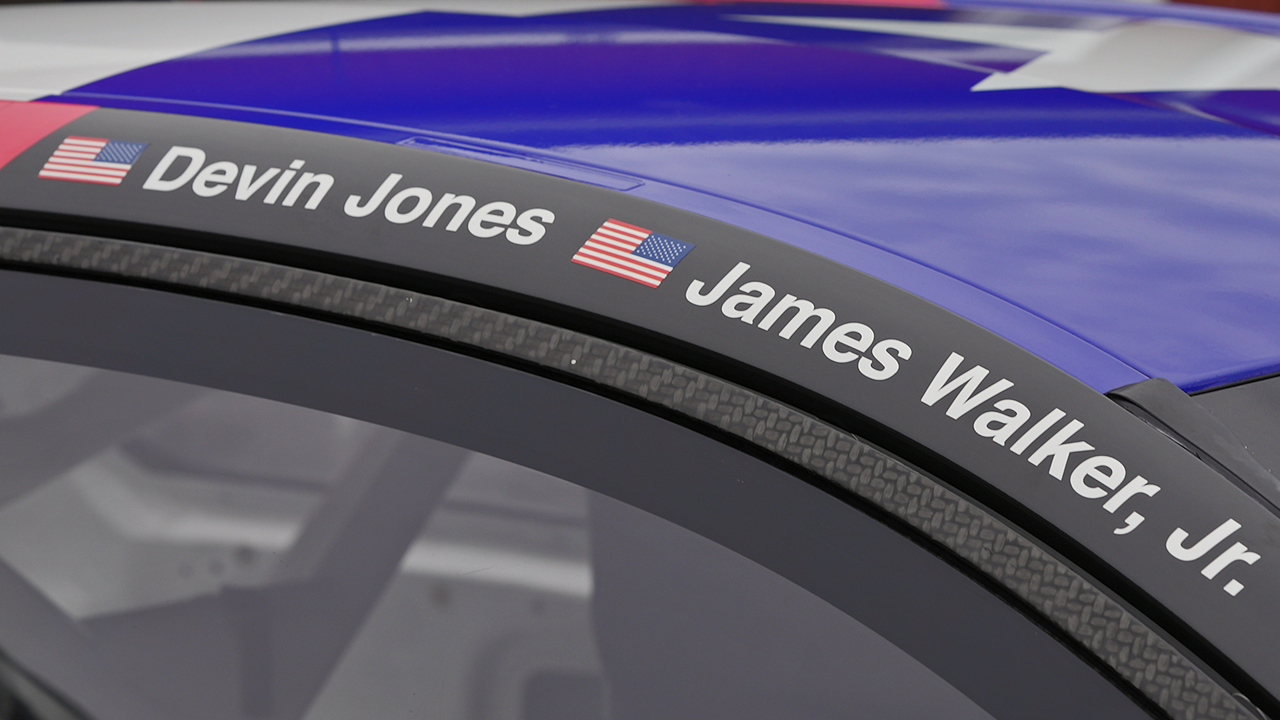 Our names are already on the car, so it must be official.

A: While Red Line Oil is still the team’s primary sponsor, Devin brings with him a 10-year relationship with Veristor. Now candidly, I’m still not sure if it’s pronounced VER-is-tor, ver-IS-tor, or ver-is-TOR, but by the end of the season I am sure I will figure that out. 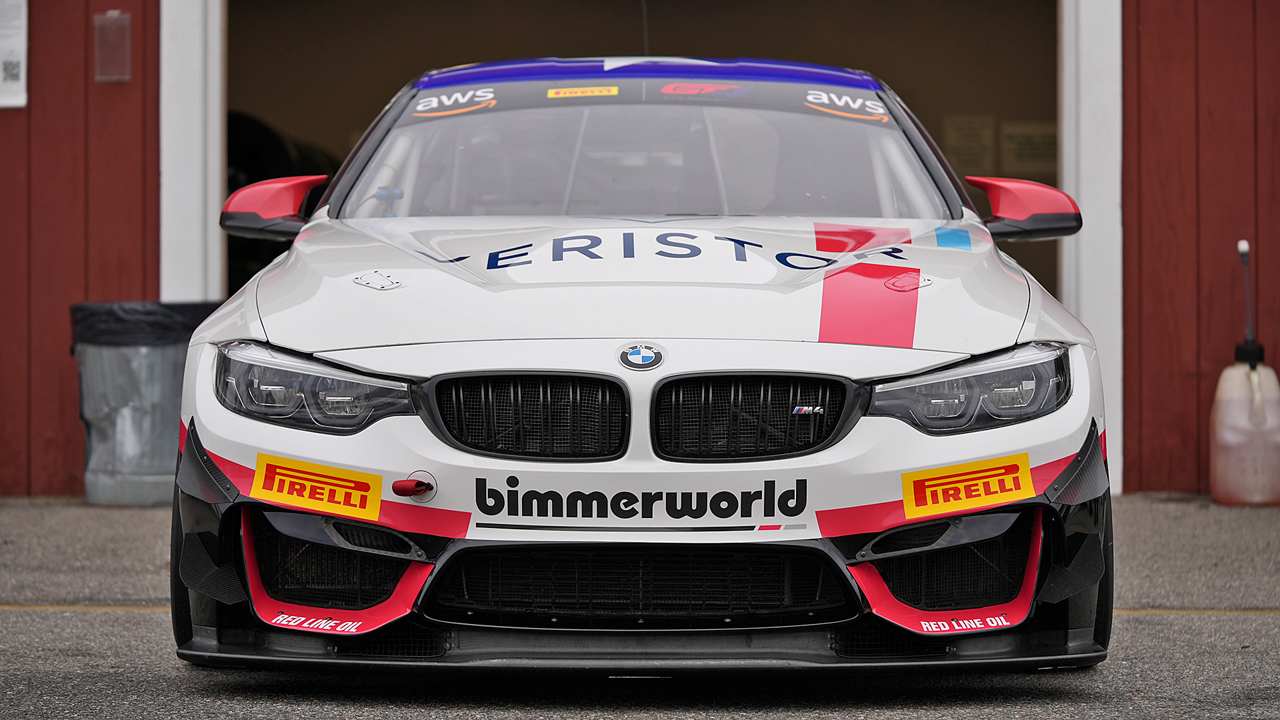 I am really a fan of this livery. Definitely some vintage Saturn in the color palette.

Q: What the heck does Veristor do?

A: Veristor is a close-knit team of seasoned experts in IT technology, and they have the best solutions in the industry at their fingertips. Together with their customers, they devise, deign, and deploy transformative solutions that provide fast, real-world returns. Whether it’s through their data center, security, networking, hybrid cloud and DevOps offerings, or their full suite of professional, managed or support services, they are passionate about IT solutions that work just as hard for their customers as they do.

A: I copied that from their website. But that doesn’t mean it isn’t true.

Q: Has the crew shuffled around since last season?

A: Not exactly, but there has been some movement on this front. Daniel continues as our car chief, a bit of continuity that is sure to pay great dividends. He will be assisted by Zach who last year was supporting the #36 M4 GT4, so that experience will be super helpful. Michael (the brawn) and Alex (the brains) are responsible for keeping tires underneath the car, and Wayne will be slotting in as our race engineer. 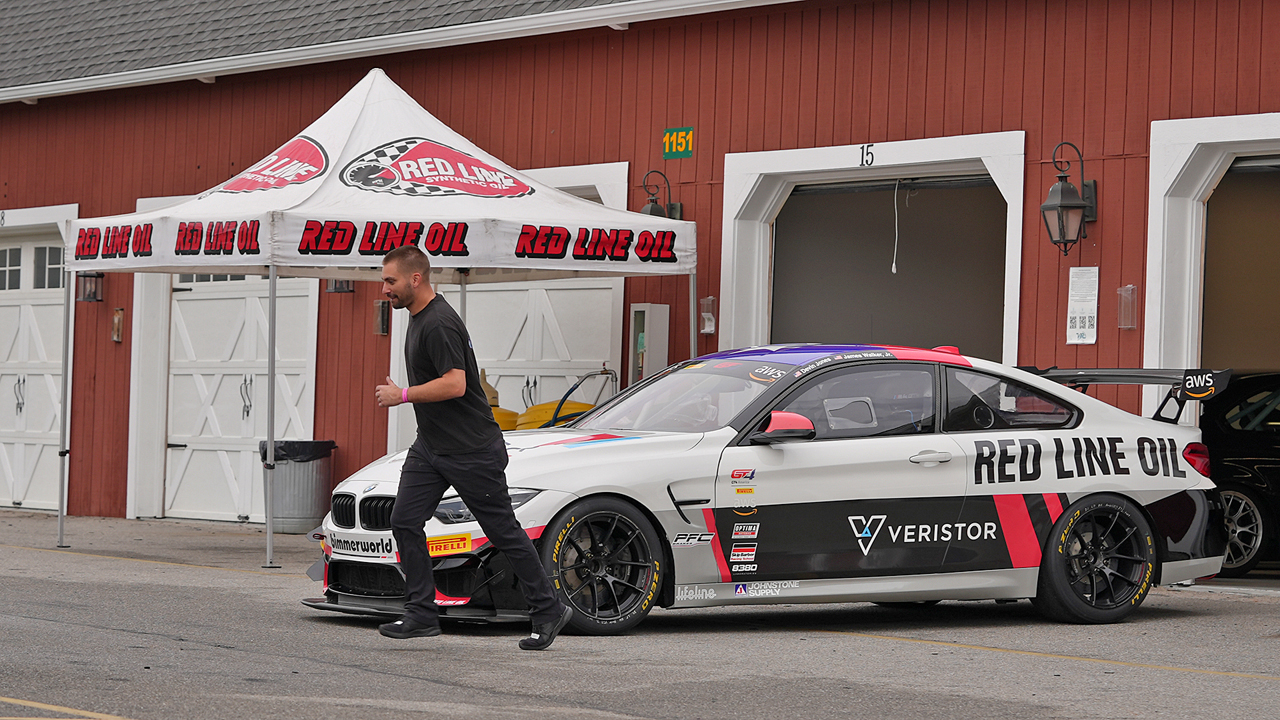 Here is Daniel trying to be not photographed. And failing at doing so.

Q: Isn’t Wayne that guy who is always posting about his cat on Facebook?

A: Yes, but he has been engineering the M4 GT4 since it first arrived at BimmerWorld, so let’s all pretend to like cats for the duration of the season on his behalf.

Q: So lots of changes, but a lot of familiar faces as well.

A: That’s basically the recipe. I should mention here that we have been forced to assume car number 82 for this coming season. Long-term fans will recall that’s the number we ran in our 2020 debut season with BimmerWorld, so there is some continuity there. But deep down inside I’ll miss having a big number 34 on the door. 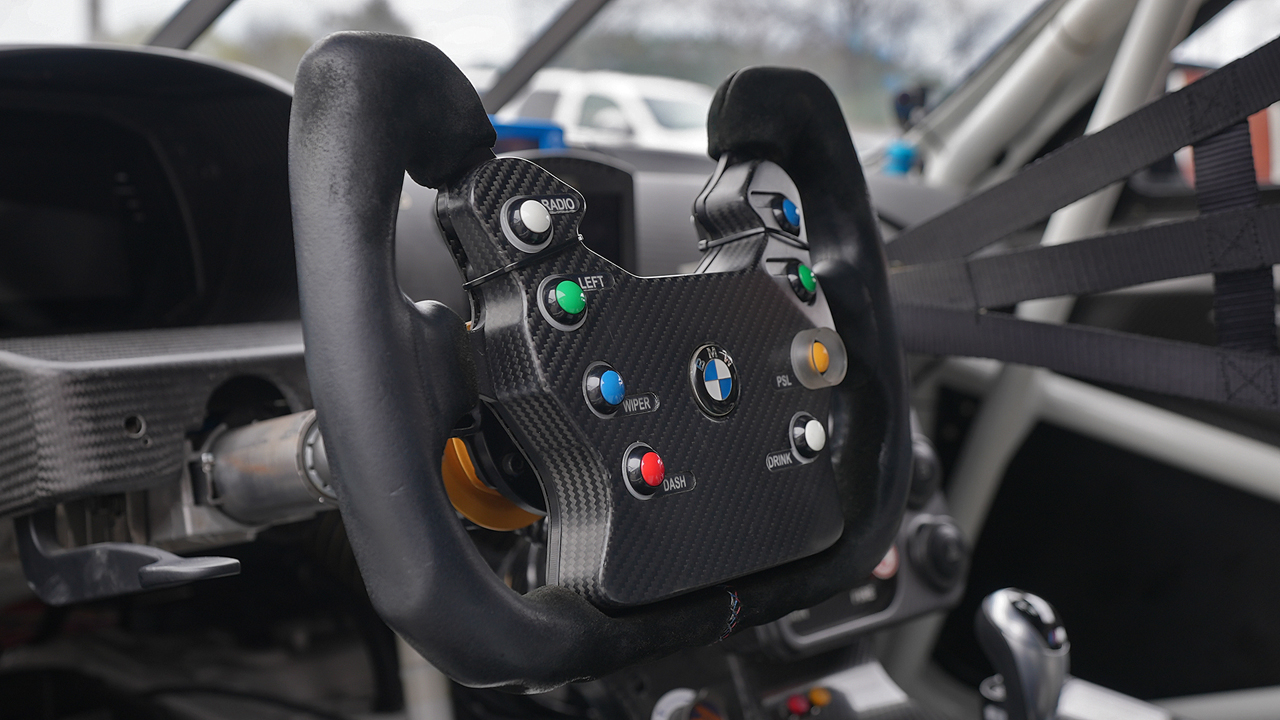 Where all the important stuff happens.

Q: Has the 2022 race calendar been finalized yet?

A: Absolutely. It has been posted on the SRO website for a while now, and it is now up at teamscR.com as well. But for the link-impaired, here’s the seven-round, 2022 SRO GT4 SprintX season-at-a-glance.

Q: Isn’t your Sonoma event being held on Easter Sunday?

Q: You realize that only a devout Lutheran will get that obscure responsorial reference?

A: Amen and halleluiah! Scoring points with all of the Lutheran pastors in the audience, there. Probably even made Greg Gil chuckle to himself as well. 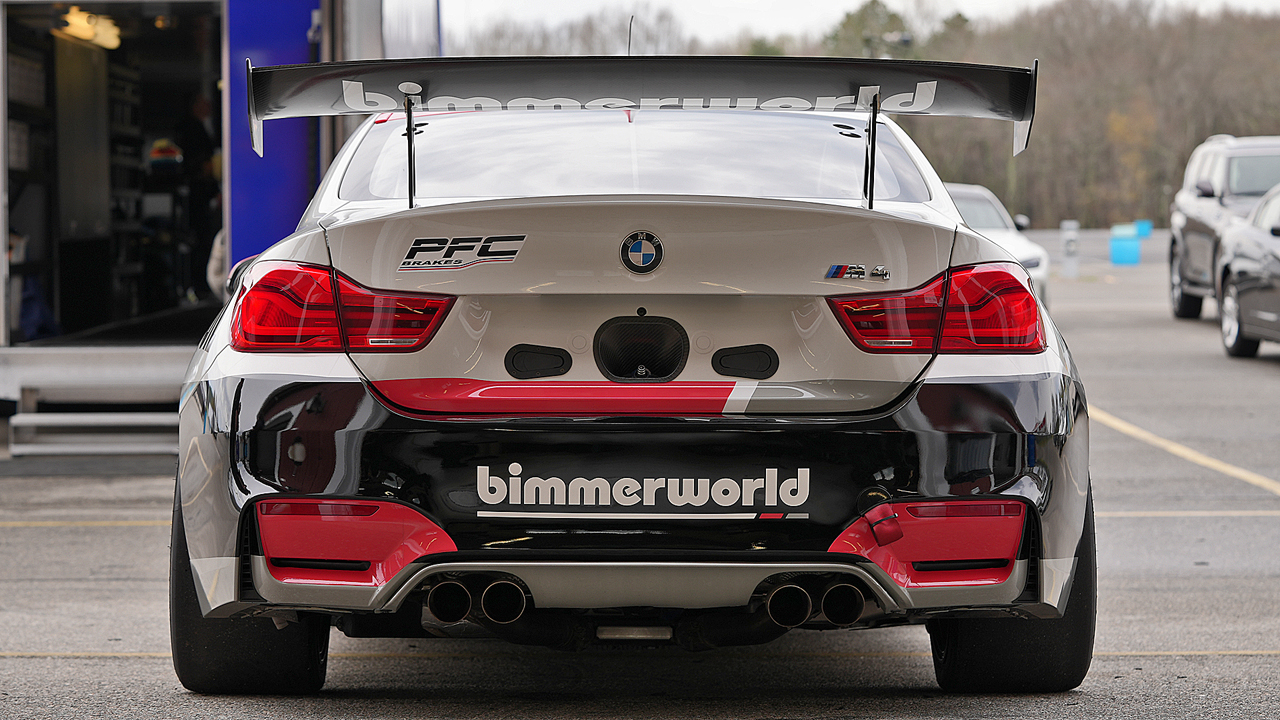 It’s cliché, but the view from the rest of the field.

Q: Have you done any work in the off season to prepare for 2022?

A: I almost forgot about that! About three weeks ago I was able to join the team at Hammer Motorsports to compete in the WRL 9+7 endurance races at Barber Motorsports Park. We were competing in the GTO class in a BMW M4 GT4 against a field of about 25 other similarly prepared racecars. While the results were entirely forgettable (some days at the track are like that), I was able to spend about seven hours behind the wheel knocking off the rust in real wheel-to-wheel road racing action. 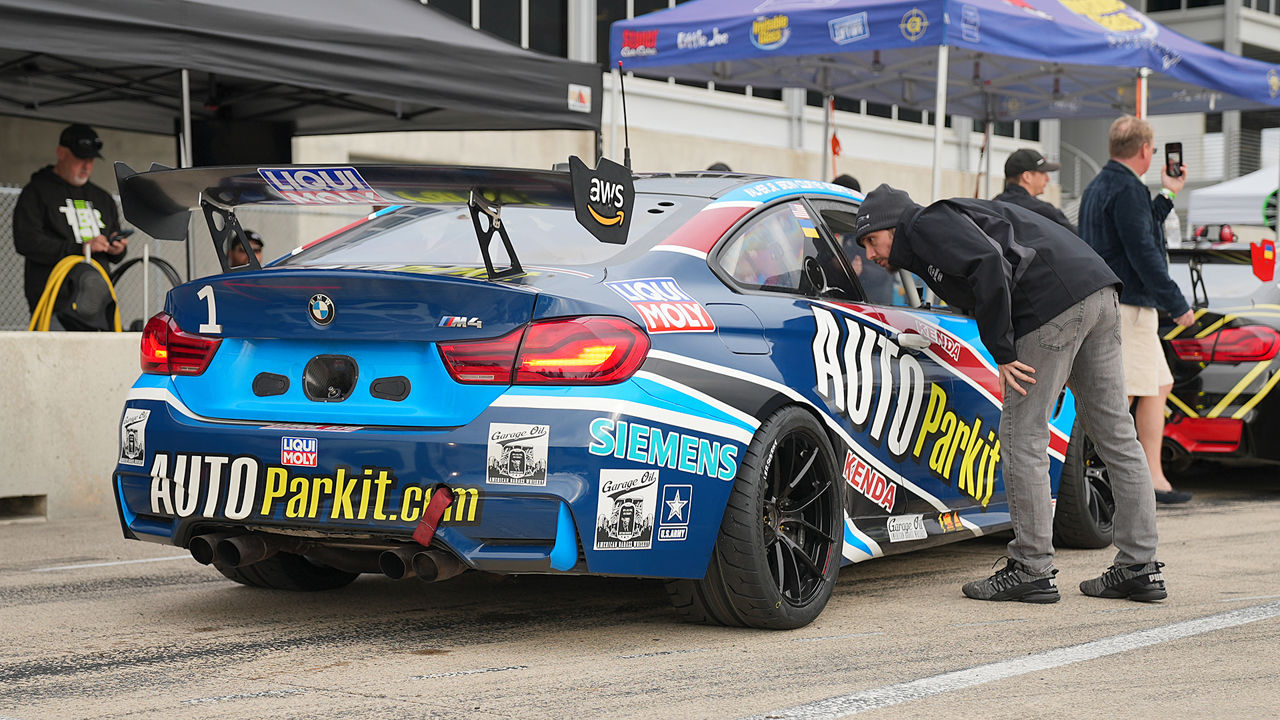 Note the treaded street tires. I’m not a fan.

Q: But no broken ring gears or blown head gaskets?

A: But no broken ring gears or blown head gaskets. So, you know, an improvement over my last WRL experience. That’s worth a big shout out here to Tim and Jeff for rolling out the red carpet and doing everything in their power to give us a competitive car, even if the car ended up being not as competitive as we would have liked.

Q: Any fun stories out of that one? Notably, you failed to write a newsletter about it.

A: Let me think. About all that comes to mind was that at one point in the race I was informed that “race control” was “monitoring me” for “aggressive driving” or some nonsense like that. I really have no idea what they could have been refencing, as I never put a wheel wrong, never made contact with another car, and didn’t make a single pass for position. I also never made a single defensive move. But I was also wrongly accused of hitting a 718 Cayman earlier in the weekend that ended up being a classic case of mistaken identity. So who knows? 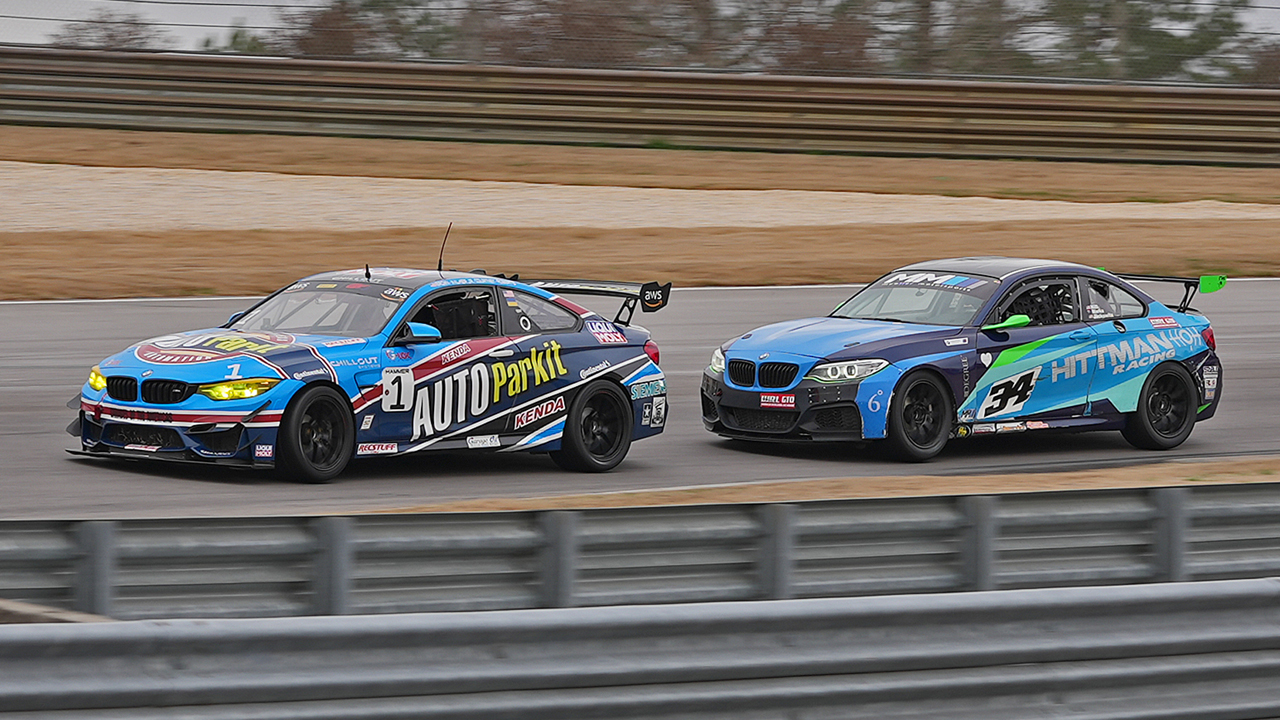 This is me being “aggressive” on track. Which is synonymous with “racing” I guess.

Q: Anything else to add? Final tricks up your sleeve? 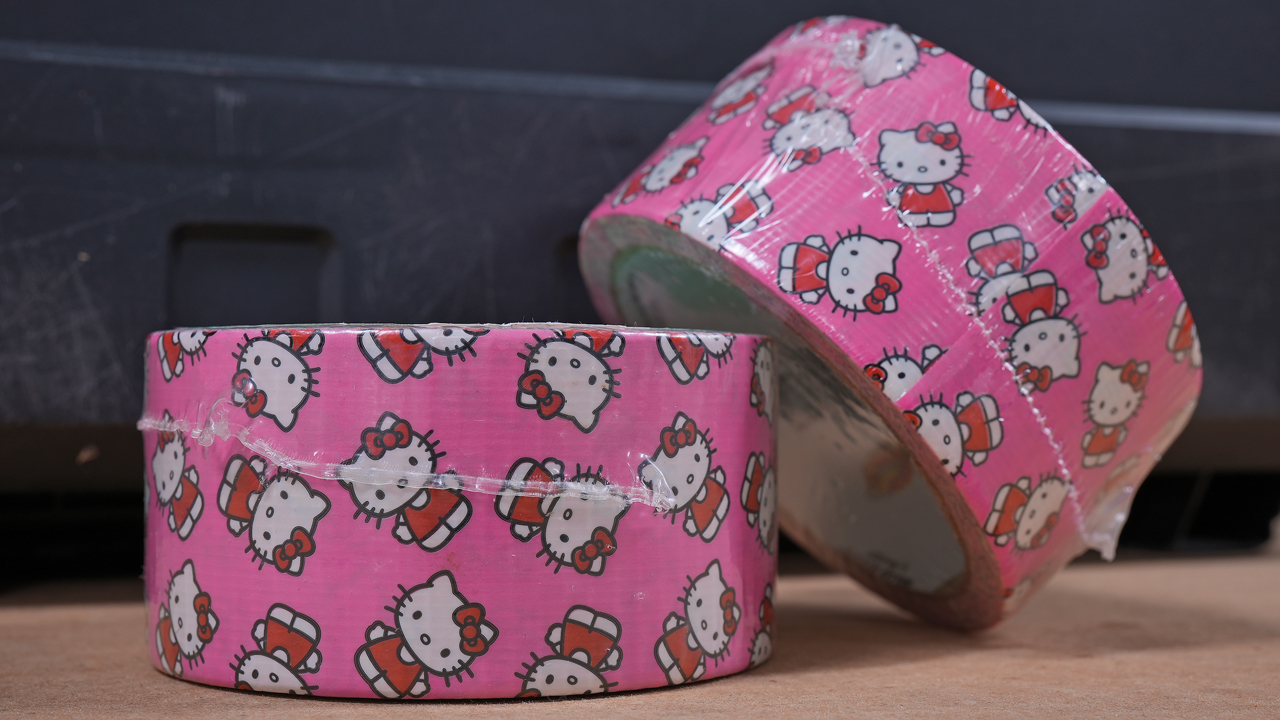 You have no idea how hard this was to find.

Q: You managed to find new-in-wrapper Hello Kitty Duct Tape? I thought it was out of production!

A: Yes, our beloved HKDT has been out of production for about five years now, but apparently there are people that hoard “Collector-Edition Duck Tape” in hopes that they can later sell it to weirdos that will pay ridiculous amounts of money for it. Weirdos like me, for example. I won’t tell you how much this cost me, but let’s just say that Dana got a nice necklace out of the deal (more DEU considerations, there).

Q: You realize you should have led off the newsletter with this information.

A: Saved the best for last 😉