After months and months of planning, wrenching, and running up the credit cards, may we proudly present the inaugural scR racing report. Hope you find it a good read! Caution: you may become addicted if you read too quickly…

You can stop reading now and still fully understand how the weekend went, but for those of you with a little spare time on your hands, feel free to read on. It gets a little long, but there is some entertainment value. 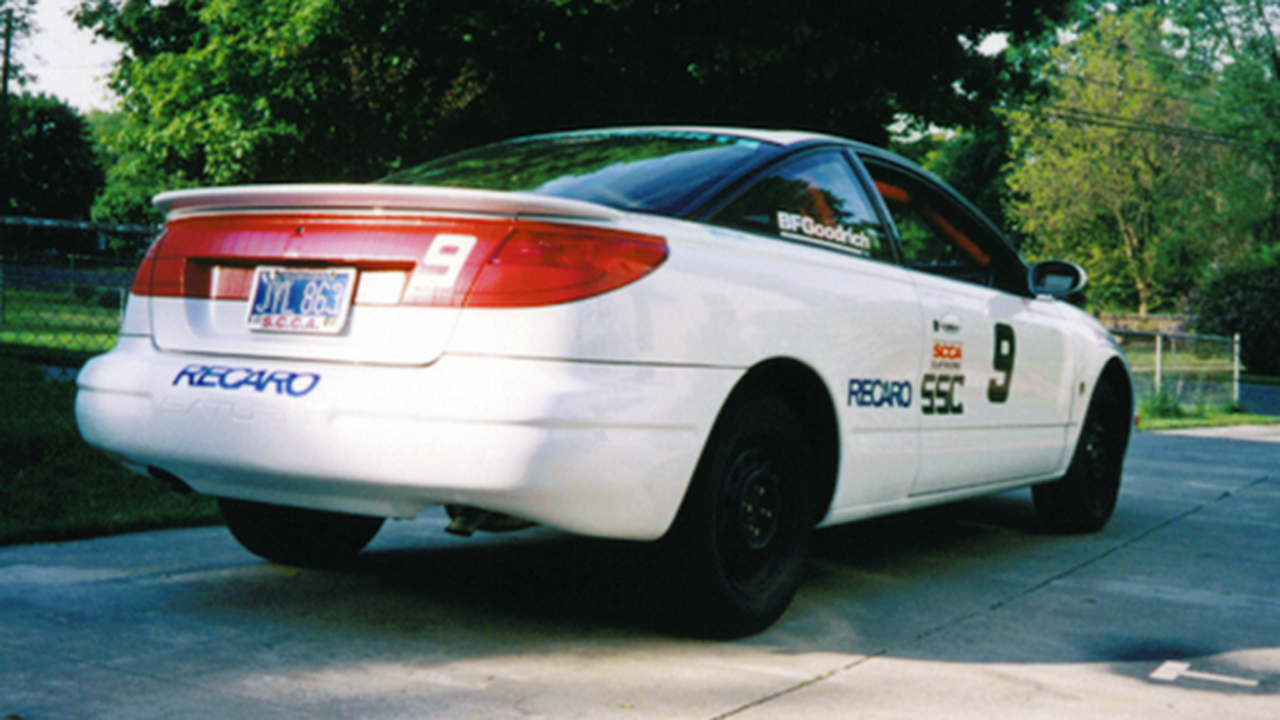 After four consecutive nights of 2am wrenching and the like, Ed and I departed for IRP early Friday morning. Drive down was uneventful, with the exception of the driving rain – a bad sign of the weather to come. Arrived at the track and got set up, registered, and began to checklist the car. Walt showed up a little later on and helped to final prep the car. Since we had prepped pretty thoroughly the night before, there wasn’t a whole lot to do. Note that the scales had us at 2430 dry – about 60 lbs overweight. Perfect, but the distribution was even better – 49.8/50.2 left/right, 60.1/39.9 front/rear. And to put a bow on it, the alignment hadn’t shifted from the autocross a few weeks earlier. Time to get a good night’s sleep.

Saturday was non-stop activity at the driver’s school. My instructor was driving an SSC Neon – the enemy. His other student was driving the HART Honda Factory SSC Accord (VTEC motor). I felt intimidated in my little plastic race car, but didn’t let it hold me back. The first three sessions were spent learning the track (it was my first time there). The car felt great – especially the motor. Go figure, it was the one thing we didn’t touch, but I wasn’t going to complain. Walt and Ed were casually taking lap times during the third session – I was running consistent 2:02’s and 2:01’s. Since these times were to be used for qualifying for the practice start sessions, I thought I would be toward the middle of the pack. Wrong.

The practice start session was composed of 54 cars – all of the open wheel classes – GT1 to SSC. Of the 54 cars I qualified 10th overall, 1st in SSC. Not too bad, I thought – my qual time was officially a 2:00.7. Time to practice those rolling starts!

The first start taught me a lot of things, like not to be too polite. I quickly found myself in 13th place. By turn 7 I had regained 2 places, but the yellow flew to re-grid us for the second practice start. Time to start from 11th.

On the second start, I had a little better idea of what was going on. This time I dove to the inside into 1, outbraked 4 positions, and had captured 4th place by turn 5. I was running down the ITS Calais in 4th when the yellow flew to regrid yet again.

Start number three was an instant replay of start 2, except this time I was on the inside of the grid in 5th. The green flew and I drafted the 3rd place car into the braking zone of 1 and dove under for the pass. Almost like I knew what I was doing. Anyhow, after holding the inside line for 2 and 3, I managed to get by the Calais and was running in 4th when the final yellow was waved. Time for the practice race! Oh yea, the factory Honda was back in 17th….

For the final start, I was gridded behind another ITS Calais, an ITA CRX, and an A/S Camaro. Managed to keep the other 50 cars behind me. When the green flew, I drafted the Camaro big time down the front straight, but couldn’t find the power to pass him. Go figure, he had 350 horsepower. The way things turned out, we raced for 5 laps and I managed to pass the A/S car under hard braking in 6 (it was really pretty – ask Walt or Ed), but ended up getting stuck behind lapped traffic 1 lap from the end and watched the Camaro go by. I was about 5 car lengths behind it at the finish (I was catching up, honest!), but still managed to finish 1st in class and 4th overall. Honda boy was somewhere back in 15ish. Cool.

So, there we were, ready to pack up the car and head home after what we thought was a totally incredible weekend. Little did we know that the fun had just begun. My instructor wandered over to our pit area and asked if I had any plans for Sunday. After replying that we didn’t, he informed me that he had filed a waiver for my second school and had an entry form for the Regional to be held on Sunday. Unpack the truck, guys, we’re staying!

Time to run for real. Qualifying on Sunday was a blast – there were a lot more drivers of similar speed and ability running. The passing was so much more fun since the cars were pretty equal in the corners. I got more than one look as I drove around the SSC Neons with the big novice ‘X’ on my door, but just kept focused on keeping out of trouble, and out of harm’s way. Walt and Ed collected a bunch of 2:00’s during the session, so I thought we were in pretty good shape to make the grid. 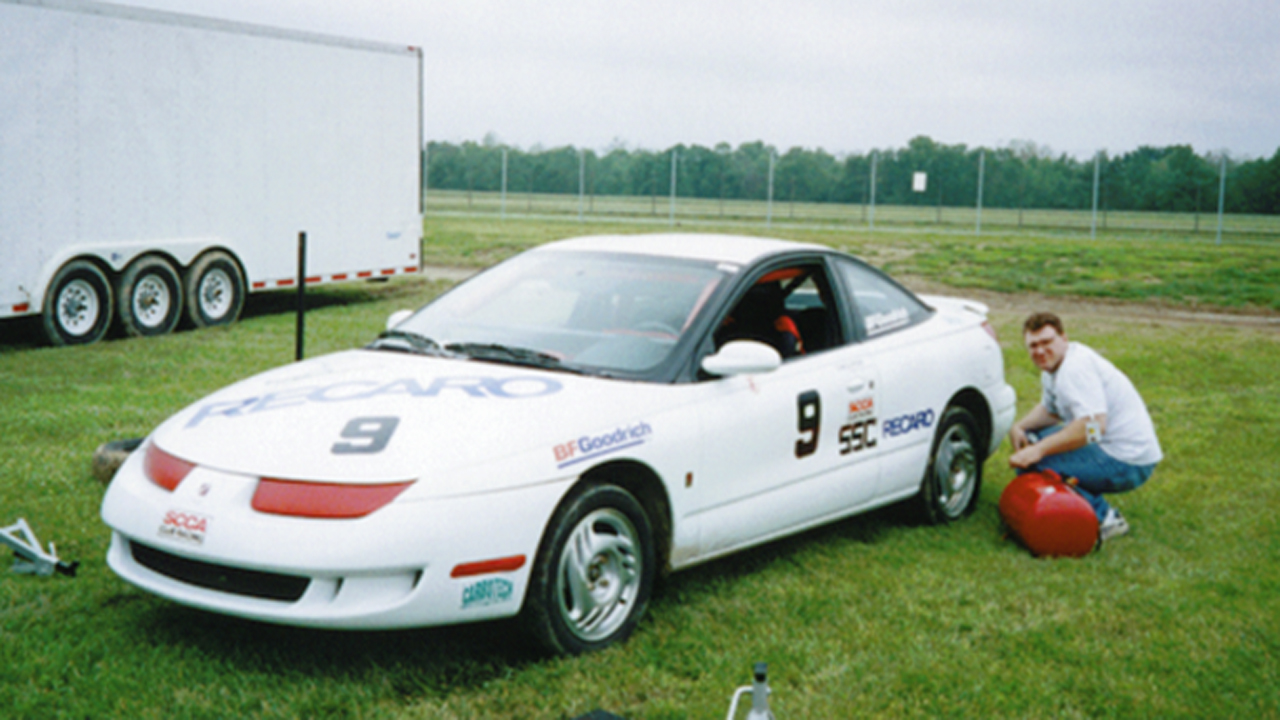 The start of a race is much more intense than a novice school practice start. On the grid, the crew chief for the other 325 behind me in 9th came by a told me to look out for his driver at the green – he was going to be ‘on my ass’. Ok, don’t panic. It’s just a mind game.

During the pace lap, I really calmed down. Stay clean, stay clean, stay clean. We were on the gas a nanosecond before the green flew, and it paid off big time. BMW? What BMW? We drafted the GTI in 5th, dove under in 1, and were in 5th overall by turn 3. Fortunately, we were not in 4th, for the SSB NX2000 in 3rd touched him and sent him sliding across my nose into the tire wall at the outside of 4. I was close enough to get mud sprayed all over the windshield as his car leaped about 3 feet in the air. Stay in the gas, stay in the gas. Sped down into 6 and found a full course waiting at 8. Calm down, catch you breath, and realize that you’re in 3rd overall. Don’t panic. Thankfully, the GTI driver was OK, but his car was pretty bent.

After two pace car laps, the green flew again. For 7 laps I held on to 3rd with an ITB GTI touching me from behind. I swear that car was 20 feet across in my mirror. His limited slip helped him pull out of the low speed stuff, but we crushed him on the straight and high-speed stuff. The SSA BMW was handily in 1st, and the SSB Neon in 2nd was still in sight. Our battle for 3/4 was just incredible. Until lap 10. Turn 15. Damn rookie.

To make a long story short, I missed a shift. In and of itself this is not a particularly fatal kind of mistake. Unless you are relying on the engine braking to keep the front tires from locking. Turn 15 is a 180-degree left hand turn, setting up for the front straight. Downshift from 4th to 2nd. On the power at the pit road turnoff. Power down the straight-away. Until lap 10.

So anyway, I missed that damn shift and smoked the front tires. I could have been Joe hero and tried to throw it into the turn, but there is a concrete barrier for the dragstrip at the outside of the turn. Not worth it to take out myself and the car behind me. I let the car go straight off the access road at the right of the turn. No damage done. Take a breath, three-point turn, get back on the track.

But not so fast, buddy…the corner workers held me until THE REST OF THE ENTIRE FIELD has passed me. I restarted on lap 10 in 35th place. Dead last overall. Dead last in SSC. (note that at the time I was 13 seconds in front of the second place SSC car – and 15 seconds in front of my instructor in 3rd!) Time to get moving. 5 laps to go. 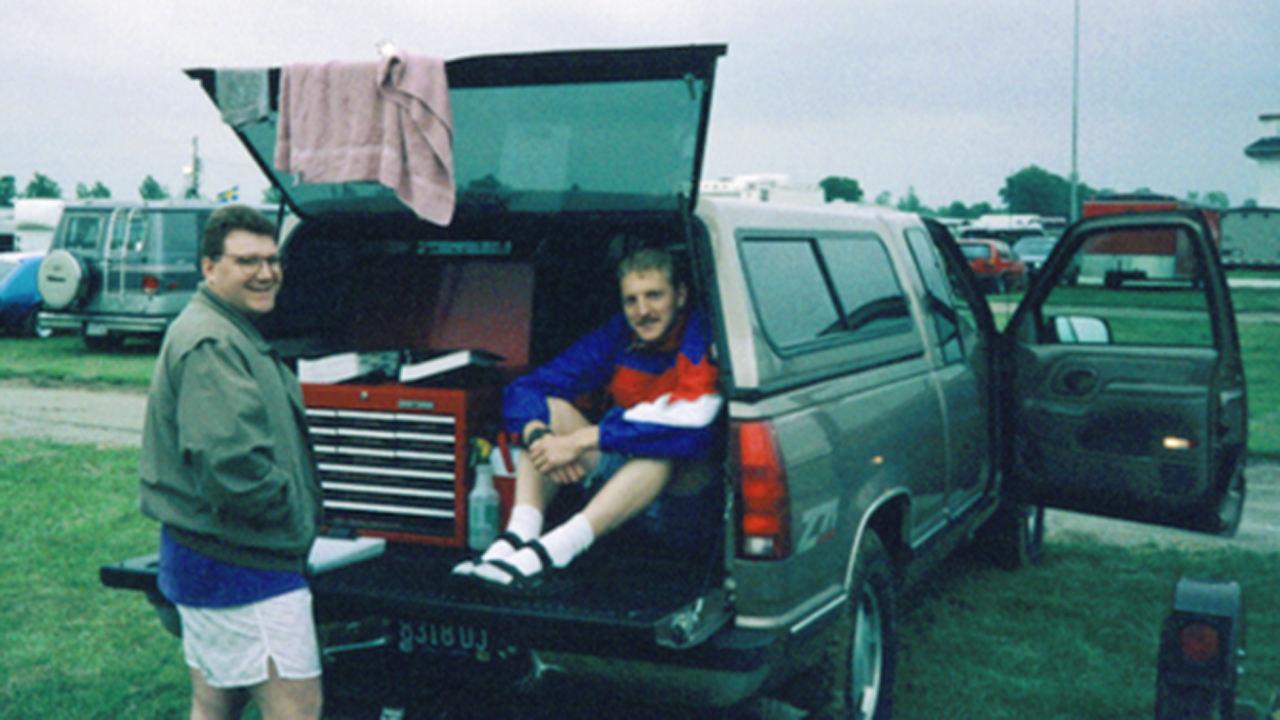 Well, I managed to pass 18 cars in those last 5 laps. Two were SSC Neons. Final results: 4th in class, 17th overall. But most importantly, no damage (except my ego?), no bruises, no regrets. I probably ended up having more fun trying to regain lost ground and getting all of that passing experience that I would have had battling for third. Yea, right.

What’s next? Since the second school has been waived, we’re probably not going to Road America on the 28th, but we’re still deciding. I will post a new race schedule later in the week, but as a preview, look for two double events at Mid-Ohio in July and an event at the Glen in early August in order to get my National license in time for the National event at Mid-Ohio in August. Mr. Kramer, here I come.

Walt and Ed – you guys were awesome. Future crew volunteers take note – they bled all four corners, rotated tires, set pressures, and washed the car between each session (4 on Saturday, 2 on Sunday). During the race I got times, laps remaining, and position signals. Phenomenal support, guys! Thanks!

Wow, I spent way too much time on this, but you’ll agree it was worth it. Look for scR motorsports to be real competitors this year. Future crew volunteers – we need you! This is not a 1-man show!

This weekend opened a lot of eyes around the region. We’ll be back. And turn 15 will be waiting……….

Well, this is it guys – our first double race weekend. Warp 9, Mr. Ed!