scR motorsports is off to a flying start this season. July 4, 5, and 6 we had the opportunity to visit (for the first time) Mid-Ohio Sports Car Park. Or something like that. But before I get too far ahead of myself…

The car is fully dressed. On Thursday, July 3 (nothing like cutting it close), the vinyl graphics were applied. Now it really looks like a race car. At least if we’re not fast, we’re stylish. And oh yea, the team T-shirts have arrived. Make sure you volunteer to work a race to get your FREE T-SHIRT!

So, back to the race report. The weekend started out just right. Crew consisted of Ed Cunningham, Chris Berube, Mark Rushbrook, Tom McCready, and our honorary guest crew member and seasoned veteran, Dan Glueck. Ken Flory, being the nice guy that he is, saved a pit spot for us so that he could mooch our tools and water wetter all weekend – and in spite of all his troubles he still ran faster times than we did. Good job, Ken. 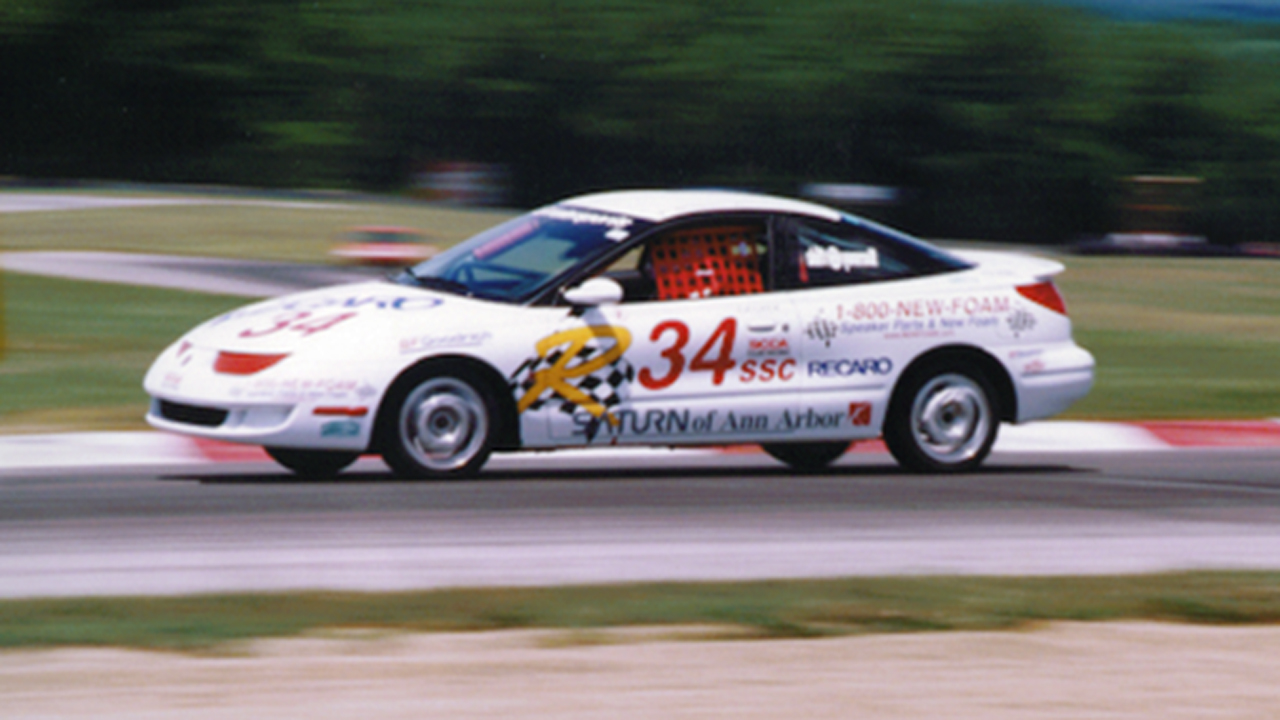 One more crew note – you guys were awesome. The car was perfect all weekend, and was always ready and waiting on the grid prior to each session, completely checklisted. Lap times, position signals, tire temps, you guys did it all. It sure makes it easier to drive when you’re not wondering if the power steering fluid was checked prior to the session. So, once again – THANKS!

So anyhow, because Ed was the most experienced of the bunch (ummm, he attended the IRP race in June), he was nominated as crew chief. Future crew chiefs, follow along carefully – don’t let this happen to you.

Well, Ed made it back to the Fairfield Inn and back to the track in a little under an hour. Luckily, our qualifying group was not due on the track until 8:45. Way to go Ed. Lesson learned: bring two sets of keys, and don’t keep them both in the clipboard.

After staging with the wrong qualifying group (where the heck did that GT-1 car come from? and that GT-1 car?) and sneaking in about 5 bonus practice laps (somehow, nobody noticed but my crew), qualifying began. For never having seen the track before, turning a 1:58/1:59 something was viewed as a major accomplishment. Good enough for third in class out of five.

During the race, I learned a lot, like at Mid-Ohio you can’t see the green flag until it’s way too late. I realized this after about 5 cars passed me on the start without me ever knowing what happened. Live and learn. Long and short of it all, we managed to pass about 7 cars (none in our group) and finished 3rd in class. Best lap time of a 1:57.2. Only had to put all 4 wheels off the paved path once. ScR lawn mowing team – sponsored by Toro. Good enough to hold off the two Neons behind me and a bring home a trophy for the team. Our first wood!

Hand-in-hand with finishing well is the mandatory trip to impound and the scales. With the low fuel light glowing at the finish (perfect timing), the car weighed in at 2390 lbs. Wow – a lot lighter that my home scale set-up was letting on. We thought we were at 2430. Luckily, minimum class weight is 2375, so the car is darn near perfect. Just need to get about 20 lbs transferred from the LF to the RF wheel.

Sunday, we attacked qualifying with two new tires, freshly bled brakes, a little less fuel than last session, a new front alignment, and a driver who thought he had learned something the day before. Qualified with a 1:57.2, same as our best race lap Saturday. A little disappointing, but there was a lot of traffic and, hey, we were still as fast as Saturday. Once again good enough for 3rd in class on the grid, only this time the second-place qualifier was directly in front of me (overall) and the fourth and fifth place qualifiers were 2 and 3 cars back, respectively. 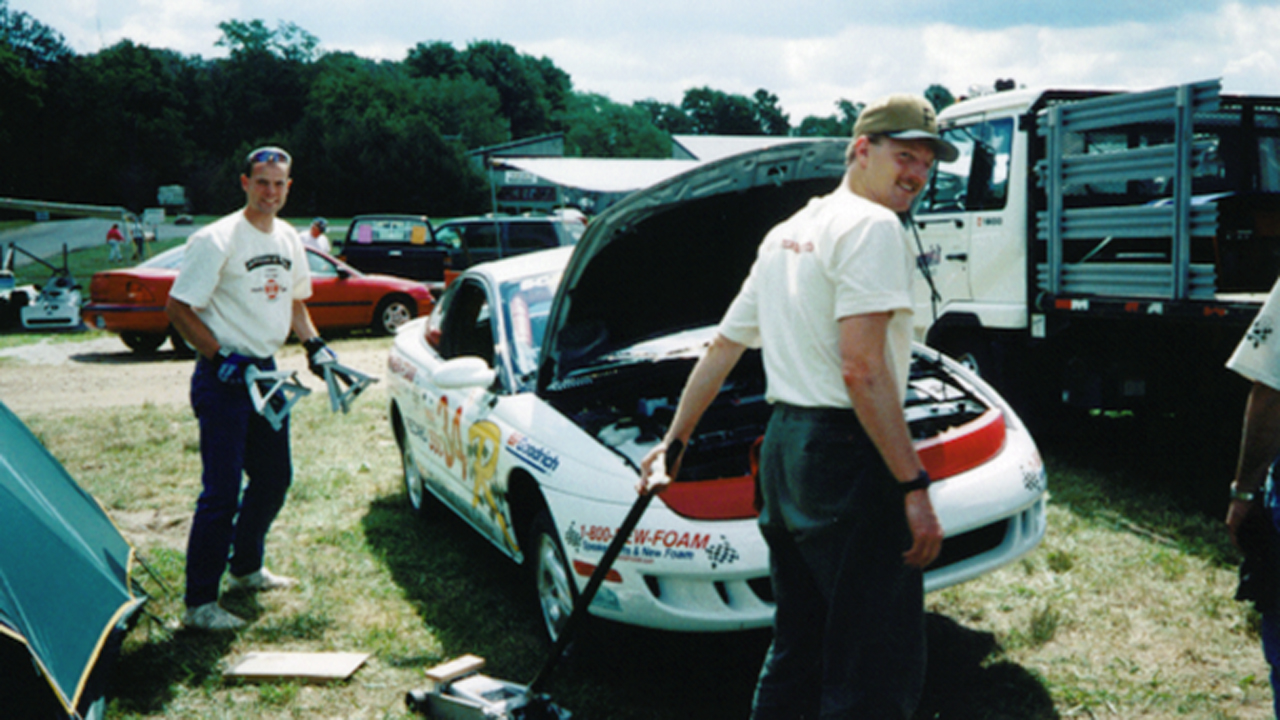 When the green flew, I was in a little better position than the day before, but still got killed. Fell from 3rd to 4th immediately because of the whole ‘can’t see the green’ thing. Next time. Anyway, tagged the guy in third and chased the guy in second head-to-tail-to-tail for three laps. It was awesome. On lap 5, the second place Neon got a bit sideways in turn 2/3 and the Miata in second place got by. I managed to sneak by as well (now in third place) and was now doing everything in my very small bag of tricks to try to get by the Miata.

Even though I couldn’t get by, the racing was great…until we caught two Sentra SE-R’s battling for position in SSB. The Miata managed to get by quickly, but I got hung up for a bit before I could get by. At the finish I was 6 seconds behind the second-place car (the Mazda), but once again brought home the 3rd place trophy! And best of all, pulled down a bunch of low 1:56’s, officially a best of 1:56.3.

So, two trophies in two days, no major accidents, and way too much fun. Next race is back at Mid-Ohio at the end of the month. We’ll have fresh rubber all the way around, new brakes all the way around, and a bit more track time under our belt. Our expectations are raised a notch.