No, we never once did forget the clipboard, although we (I?) did manage to leave it on the hotel counter as we were checking out for the weekend on Sunday. Nice save, Pete. What a great track!

Team scR is definitely on a roll this season. After a very successful double race weekend at Mid-Ohio over the 4th of July weekend (our first two third place trophies), we were eager to re-assault the circuit. Armed with fresh tires, fresh brakes, and several minor speed tweaks, we had high expectations as we pulled in to the paddock area. Then the clouds rolled in….

Saturday morning, we arrived at the track with the car already prepped. We were joined by our – now official – latest sponsor: Mr. Larry Narcus from Carbotech Engineering. I love his brakes (paid endorsement). For some reason he flew up from the home office (well, only office) in Fort Lauderdale, Florida to crew for team scR. Although ace crew chief Tom McCready, Pete Uller, and Larry did a knock-out job of setting up the car prior to each session, none of them could have anticipated the rain which arrived shortly (shortly = 5 nano-seconds) after our qualifying session was sent out on the track.

Running brand new shaved racing R1’s in front and used shaved R1’s in the rear proved to be a challenge. Luckily, all of our competitors were caught off guard as well. The session ended 4 minutes early, as the conditions got so bad you couldn’t see 10 feet in front of your front bumper. Thunder, lightning, etc. Puddles along the back straight threw the car every which way. We qualified 45 seconds off our best lap time from the previous race! At least nobody was stupid enough to try to pull off Joe hero moves – all of the cars came back in under their own power. 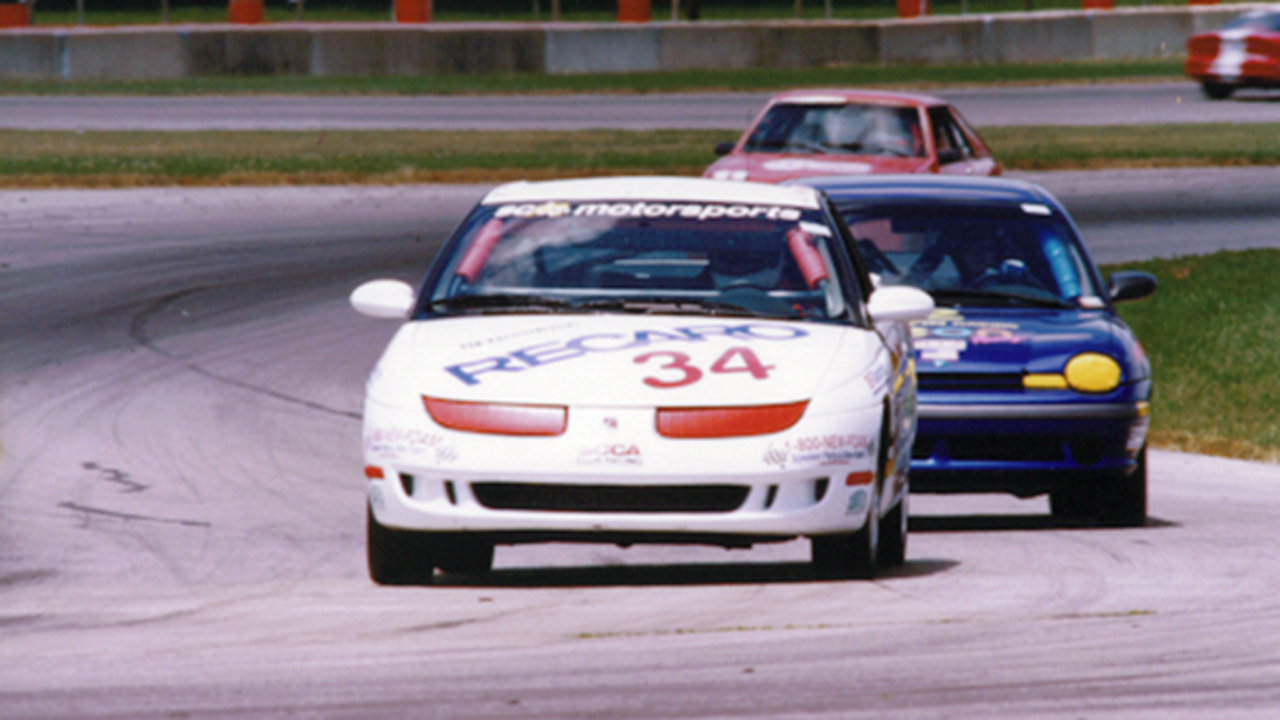 Needless to say, the starting grid for the Saturday race was a jumbled mess. We managed 12th overall out of a field of 21 cars – 3rd of 5 in SSC. There were several slow AS Camaros in front of us at the start, so we knew that getting a good jump would be a challenge. At least I could see the green flag when it flew!

At the drop of the green, I pulled about 2 cars down the front straight, but got boxed in by a slow SSB Sentra. Ended up falling back 2 places – 4th in class after turn 2. Darn Neon (race winner from the previous weekend) got by me in turn 2. By the end of the back straight I was clear of the Nissan (hoped that he ‘enjoyed the ride’) and was instantly in ‘catch-up’ mode. Three cars in front and one behind.

Caught the Neon 2 laps later under braking at the end of the back straight. Stuck my nose under him and didn’t let up until he hit the brakes first. I’m still not entirely comfortable doing that, but hey, it worked. Time to catch the first and second place cars – a Honda Civic in 1st and a Miata in 2nd.

One lap later I caught up to the Miata (also a race winner from the previous weekend) who was battling traffic. I camped out on his bumper and played the draft trying to catch the Honda. We ran well together for 2 laps – the Honda was now in sight; however, watching the Honda run the course was kind of scary – he was driving as if he didn’t care who was around or behind him. Several times he made abrupt moves toward other vehicles. Made a mental note to pass carefully, and put the pedal down.

To make this long story short, as the Miata and I went to pass the Honda on the outside of a very fast left-hand turn (just before the carousel), Honda boy darted to the center of the track. The Miata and I began our nose-to-tail pass on his right. Just before the braking markers, the Miata cleared the Honda. Guess that the Honda didn’t see me back there too, because he decided to tuck in behind the Miata. Here we go again – all four tires off the course. Can’t I go one race without mowing the grass!?!

As soon as I was off, the Honda must have seen me, for he darted back to the center of the track. By the time I got it all back together, the Miata was 5 seconds in front of us. Damn!

Half a lap later, I drafted said Honda down the back straight and once again dove to the inside, waiting for him to brake – after all it worked with the Neon 4 laps earlier. Well, I guess he was waiting for me to brake, because he didn’t. After I knew he had no chance of making the turn, I destroyed any chance of running a clean corner, but kept my car on the track. The Honda wasn’t as lucky – he locked up all four and sailed off the end of the straight. Ha. Turnabout is fair play. Time to catch the Miata.

With two laps to go, I was 6 seconds behind Mr. Miata, but 8 seconds in front of the 3rd place car. Figured that I couldn’t catch the leader, so drove hard but conservatively for the final two laps. It all paid off with our first ever second place trophy. Go team! Best race lap was a 1:56.3 – equaling our best performance of the previous weekend. Not bad for never having a truly clean lap. 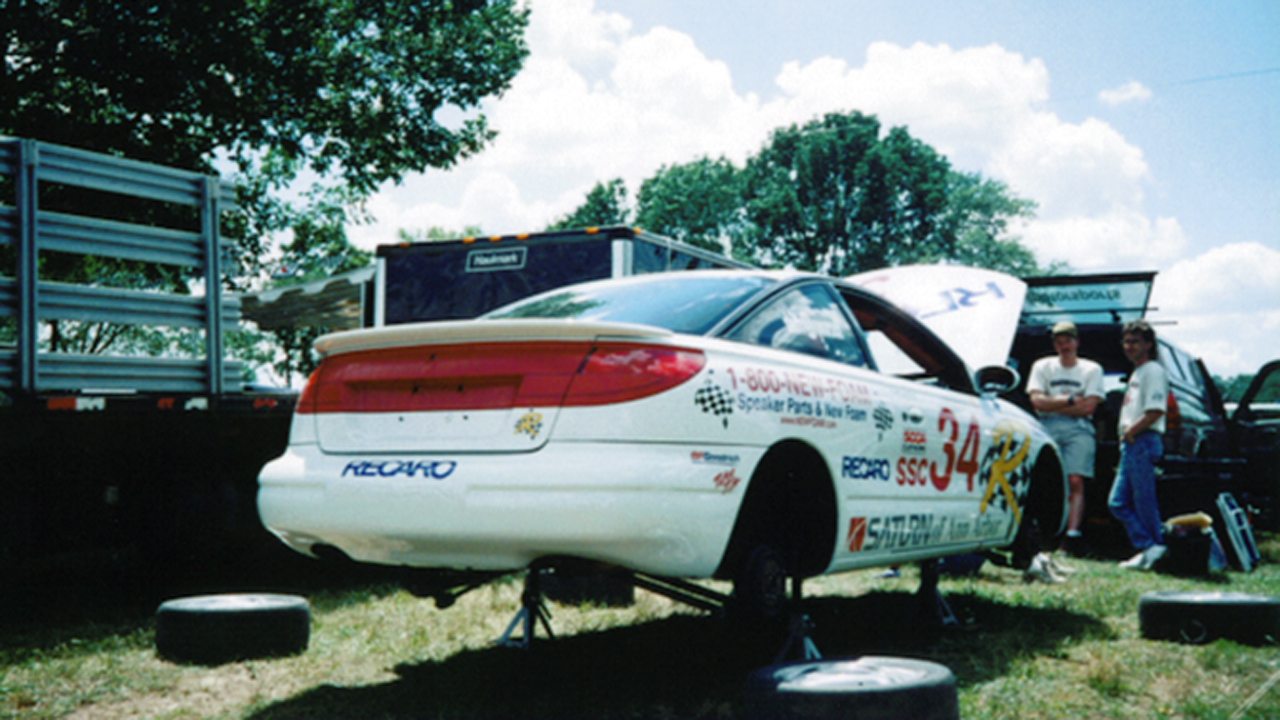 Sunday morning was beyond humid. Way beyond humid. And hot. Really hot. Car was noticeably down on power. Ugly day for a race, but you take what you can get. At least it beat the rain from Saturday.

Qualifying on Sunday, I once again got stuck behind two big AS Camaro pigs. Man, they move down the straights but we walk away from them in the corners. Anyway, after slowing down for two laps to let them get out of the way, we managed a best qualifying time of 1:55.9 – our best lap ever! Unfortunately, both the Miata and the Honda found speed as well – once again we were 3rd on the grid of 5, but the top 3 SSC cars were 7th, 8th, and 10th overall. I hoped it would make for some good racing. Oh yea – there was a Camaro in 9th.

Predictably, at the start the Camaro blew my polymer panels off down the front straight and pulled in directly in front of me. The driver obviously was having a bad day, since he was consistently 3/4 car width from every apex on the course. Add that to the fact that the car is over 7 feet wide (at least when you’re trying to pass them), and I had my work cut out for me. For 4 laps we swapped places at three different places on the course. On every straight he would rocket by at the last second and block me completely from getting by in the corner. So, while I was back scrambling with the 300-horsepower monster, the Honda and the Miata were happily having their own fun, well ahead. After my 1:55 in qualifying, my first four race laps were each over 2 minutes long – we lost about 14 seconds before the race was even halfway over!

Fast-forward to the end of the race. Didn’t pass anybody, didn’t get by anybody. Finally got rid of the Camaro and managed a best race lap of 1:55.9, and my final 7 laps were all between 1:57.0-1:55.9. Pretty consistent, for our second weekend out at the track. And, hey, we beat the 1st place SSB car. Small victory!

So, there you have it – a second and third place trophy. Both races we beat the lone Neon and the factory Honda Accord, kept the car on course (for the most part), and had a ton of fun. If they all end like this, we’ll be running for quite a while. Now we just need to find a way to get by that Miata.

Once again, thanks to the crew support – even my mom was working the torque wrench (she just wanted the free T-shirt). We still have dates available, so come out and join the fun. Just make sure to bring your suntan lotion!