Having spent 23 years in upstate New York, I consider The Glen to be my home track. This is where I attended my first Porsche Club School five years ago in my 93 SL2 and got hooked on speed. I’ll be the first one to admit that properly driven, a 911 will run the doors off a SL2, but it sure is fun running by some of those 911’s with your little 1.9 – just like the commercial!

Crew disclaimer – Ed went the whole weekend without misplacing the clipboard. You are exonerated from further ridicule and insult. At least until the next race.

Cut to the chase – team scR claimed its fifth podium finish of the season (out of six starts!) while competing in the largest field we had yet to encounter! Third place out of a field of nine cars – six Neons, one Miata, and a Nissan Sentra SE-R. At the end, only one Neon and the Nissan were in front of us, and we had a legitimate shot at second place for a while. The details follow.

For those of you who remember my old red ’94 SC2 autocross car (the ‘red car’), you will recall that the ‘red car’ was much more heavily modified than the new white ’97 SC2 race car (the ‘white car’). The ‘red car’ was using a limited slip differential, lowering springs, aftermarket exhaust, improved intake system, wide aluminum wheels, etc. The ‘red car’ was timed at the Glen at 2:33.1 last year at a Porsche Club school day – this was our point of reference going into practice Saturday. We figured that since the ‘white car’ didn’t have the performance upgrades of the ‘red car’, and since it even weighed 100 lbs more than the ‘red car’, the lap times were not expected to be better than those generated by the ‘red car’. That was the expectation, anyway. 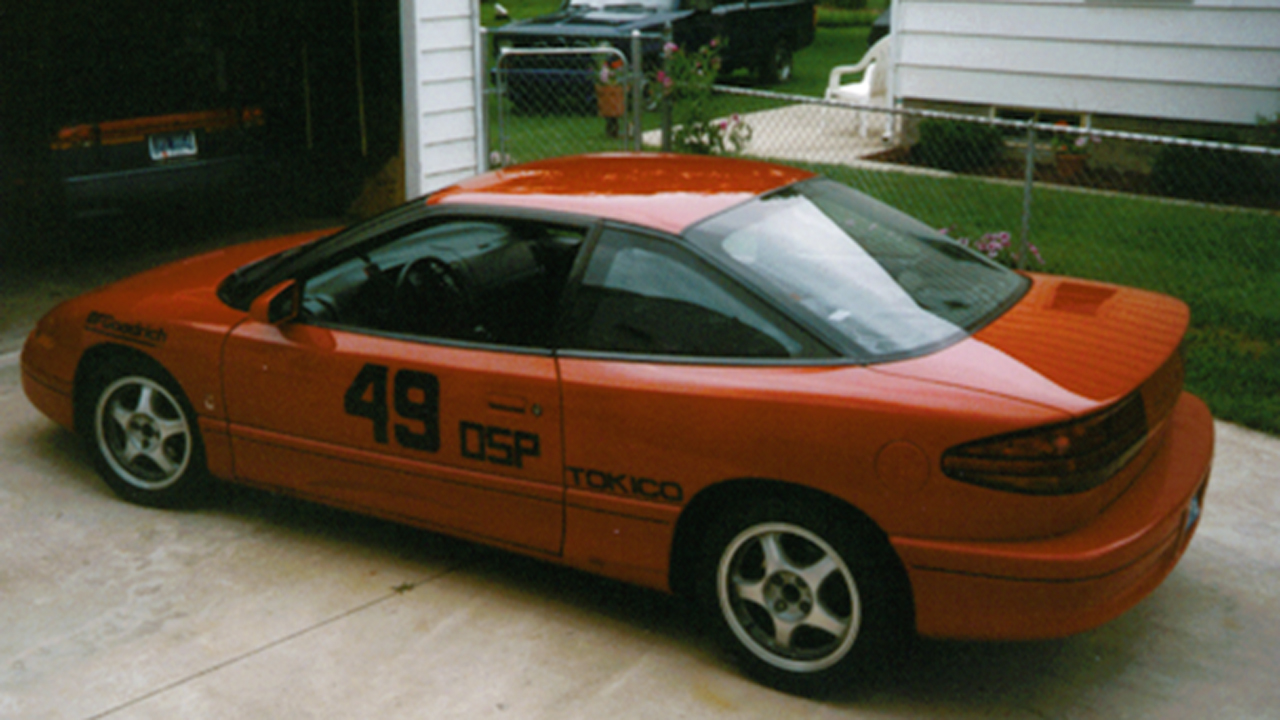 In practice Saturday we only got in 5 laps – traffic, brake bedding, and re-learning the track kept us from running at 100% for most of the session; however, driving conservatively still enabled a best lap time of 2:35. Not too bad considering the tires were well used (saving the good rubber for the race Sunday), the front brakes were almost gone, and the rear brakes were replaced prior to the session. We were optimistic heading into qualifying later in the day.

The weather turned ideal for qualifying – mid 70’s, mild humidity, little bit of sun, nice breeze. Enough about the weather – six qualifying laps later we had brought our times down to a 2:32.5 – our best time ever at the Glen and a full 6/10ths faster than the ‘red car’ had run. Mark, it must be that the cage does wonders for handling, for on the back straight we were still 3-4 mph slower than the ‘red car’. The ‘white car’ really runs well in the corners! 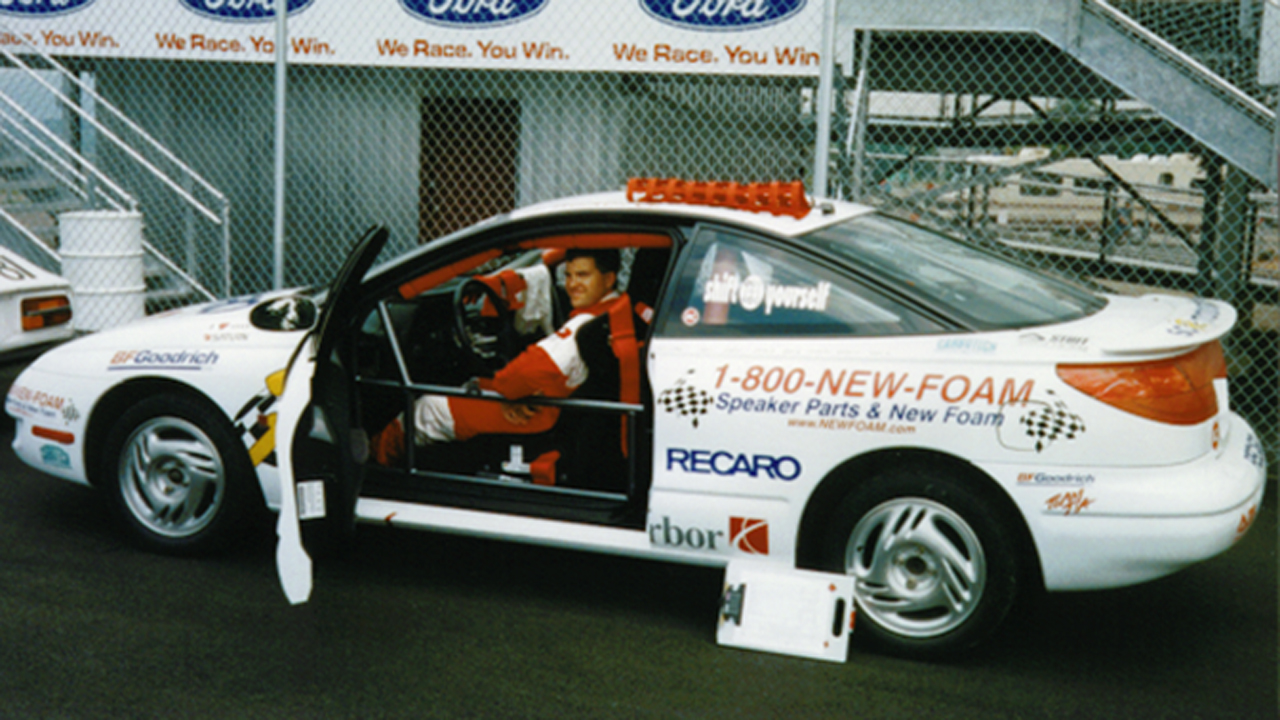 Our 2:32 was good enough to grid us 4th out of 9 cars, but the rest of the field looked something like:

Only 0.025 seconds out of second place on the grid! It doesn’t get much closer than that. Unfortunately, the pole sitter in SSC was 4 SECONDS faster than the rest of us. Makes you want to scratch your head a bit and wonder what made him so fast, but we were more concerned on how to get by the guys in 2nd and 3rd. Priorities, you know.

After qualifying and taking a nap (this racing stuff really tires a guy out…and it’s amazing just how comfortable a plastic bedliner can be), awesome crew chief Ed and driver James bled down the brakes, checklisted the car, installed the good race rubber, and drove back to Rochester for the evening. Time to get a good night’s sleep and strategize in the morning!

Somehow Ed cheated death and got us to the track early Sunday morning driving my dad’s Grand Marquis. There is really nothing Grand about it. Anyway, our fans began to pile in early – the Kendig family of 1-800-NEW-FOAM fame (our beloved sponsors), Dana (my wife and scR motorsports honorary treasurer), Dana’s parents, and a small contingent from Saturn of Rochester (my cousin John is a big shot there). The Saturn guys even were kind enough to bring their demo along in case we needed a parts car. How thoughtful! We need to keep this up in the future.

At the start of the race, we got a really good jump on the green, but so did everyone else – and they had bigger motors. We didn’t gain any positions on the start, but we didn’t lose any either. For three laps, I was about 3-4 car lengths behind the Nissan and Neon battling for 2/3. I figured, let them fight it out and slow themselves down – I was sitting back waiting for the right time to make my move. The opportunity came one lap later. 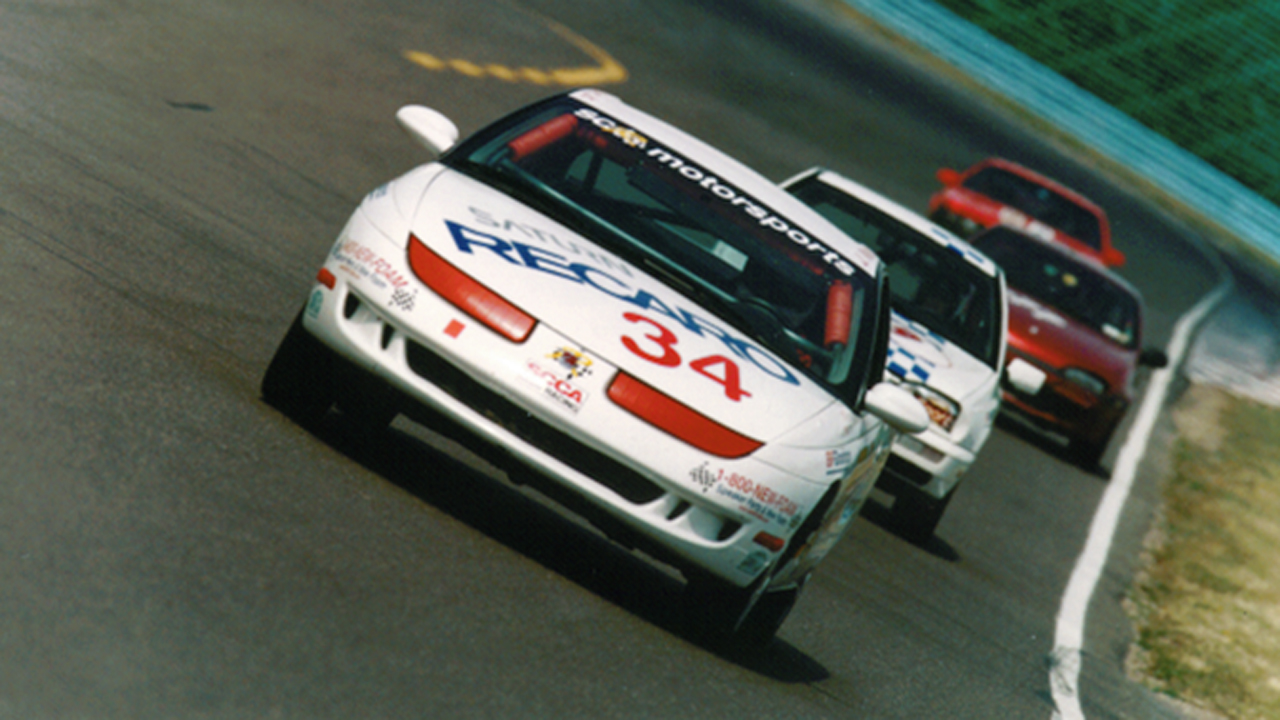 The Nissan in 3rd tried to tuck under the Neon entering the back straight chicane. They ended up touching for a moment, and the Neon spun off into the weeds (it’s actually grass there, but ‘spinning into the weeds’ sounds more graphic). This little incident also slowed the Nissan for a step or two and I ran right up on his rear bumper. Third place for the moment.

Two laps later, some other cars got together in the same turn and brought out a full-course yellow flag and pace car, allowing the field to bunch up and run around the track at 30 mph. Good time to catch my breath and determine just how I was going to get by the Nissan. He had more horsepower than we did, but in several corners we would make it back up. Just wait for the green to fly….

On the restart, we got an AWESOME jump on the field. We passed the Nissan and two other cars on the front straight before they knew the green was flying! I was so very proud of myself! Officially in second place! This must have been my best start or restart ever. We could just see the SSC Neon in 1st place, and we began to chase.

Well, it only lasted for so long. Four laps from the end, the Nissan got a good run at our inside going into the chicane where he spun the Neon (not that I would actually accuse anyone of intentionally doing that). I didn’t close the door hard enough and he poked his nose in. I tried to out brake him to shut the door, but ended up momentarily locking up the front wheels. Not fatal or anything – I quickly backed out of the pedal, turned the car and sat on his bumper. He got by, but I figured I would wait for the end to make my move. I find it much easier to chase than to be chased.

So, the chase began; however, the implication of locking up the front wheels was about to become obvious. Right after the Nissan passed us, the track veered sharply left then right. The car did something like this: 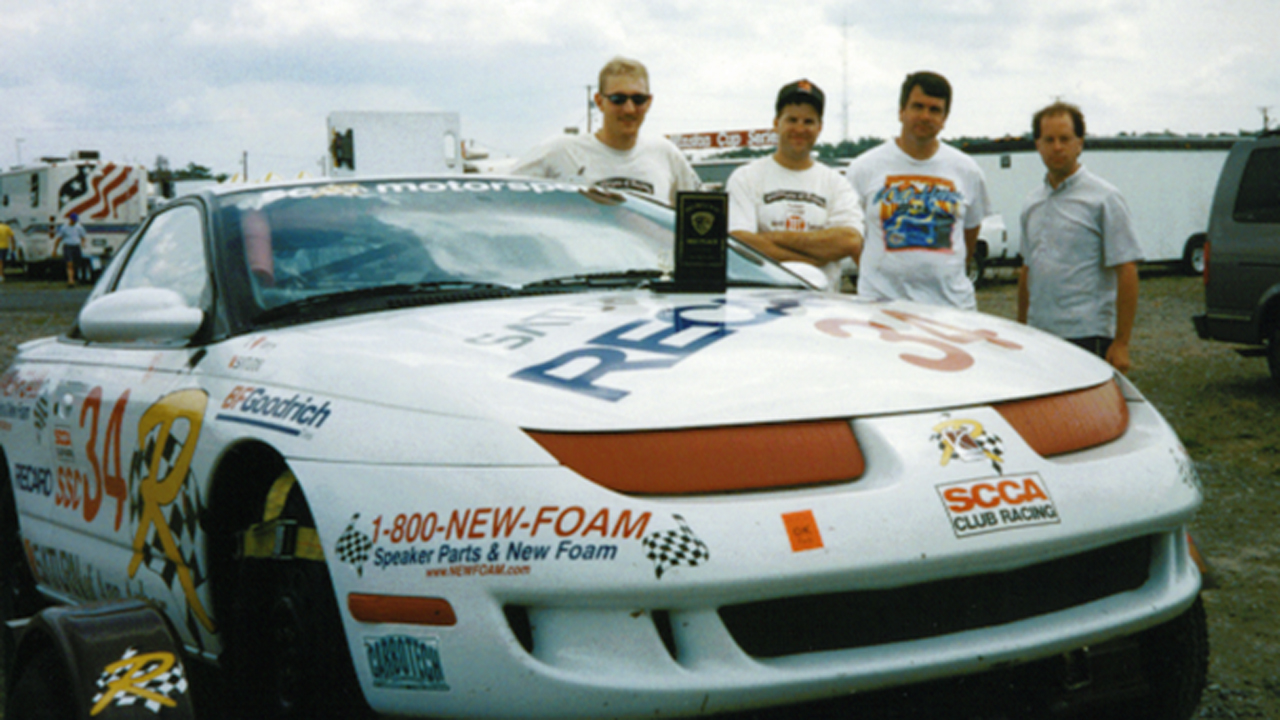 Bad. Very bad. Each time I turned the wheel, it would vibrate violently back and forth and the car would push like it never had before. After completing one lap with the car fighting me the whole way, I figured that it wasn’t going to fall apart, but I also realized that I couldn’t run with the Nissan anymore. Enter limp-home mode. For the last three laps, we were 5 seconds off our race pace, but still managed to finish in third. Not a bad way to end the weekend, but a little disappointing since we were running in second for a while. Post-race inspection of the front tires turned up steel belts showing through both tires in several locations. The largest was twice the size of my palm. Guess the coefficient of friction of rubber on asphalt really is higher than that of steel. Live and learn.

The eight-hour ride back to Michigan would have been uneventful if it would not have been for Ed riding his VFR750 through a downpour that brought several cars to the side of the road. I don’t think he has any grey matter left, but Ed, you can still crew for us if you want.

So, race fans, we now begin preparation for the National at Mid-Ohio August 22-24. Our license requirements have been met (yea!) and all applications are in the mail. We have two weeks to tear the car down and make sure it’s up to the task. If anybody has a free weekend this month…

Thanks for your support!