This was to be team scR’s trial by fire – our first National event. Running with the big guys. Racing with past National Champions. The ones you read about every month in SportsCar magazine. The ones in the ads. Club racing’s heroes. I’ll stop now.

I’m not one for harsh words, but driving in the rain sucks. The only thought which crosses your mind (besides ‘OH SHIT!’ crossing your mind 5 or 6 times per lap) is, “boy, I wish we had put on the rain tires before the race!”

We arrived at the track Friday evening and ran through the routine – crewing this weekend provided by Dan G, Tom M, Steve S, and ace crew chief Walter. During dinner we laid out our objectives in detail:

1. better our previous best qualifying time (1:55.9)
2. qualify in the middle of the pack (14 car field)
3. improve our finishing position from wherever we ended up qualifying

Oh yea – we also didn’t want to embarrass ourselves.

Saturday morning was cold – mid 50’s. To compensate, we dialed in 2 extra PSI in each tire. Harmless, right? Practice was very frustrating – the car was pushing in every corner. Power was great! Driver was intimidated. Tire temps showed we were about 30 degrees warmer in the center of the tire than on either edge – guess the 2 PSI thing really backfired. Took the car back to the pits and found the left front caliper was over-retracting, causing the pedal to go way-way-way down before the brakes came on – hence the horrible brake performance. In summary, the car was no fun to drive, but our best practice time of 1:55.4 was our fastest lap ever. We stopped complaining.

Prior to the qualifying session, we corrected the tire pressures, bled the brakes, and tried to free the sticking caliper. A spare was in the crate, but the motivation wasn’t there to swap them. I figured that if the car was stopping, why break into the system until we had to. Probably the wrong choice, but a decision was made and adhered to.

Those National T1 and AS drivers are stinking fast. Most of the entire qualifying session was spent dodging them closing in on me at 140 mph +. I managed to follow a few fast Neons around, picking up on their lines and seeing what they were doing differently than I was doing. I learned a few moves and ended up qualifying with a 1:55.0! Objective #1 accomplished – we were a full 9/10 second faster than our previous best. I can confidently say that if we were given another lap or two, 1:54’s would have been scored for team scR, brakes and all. 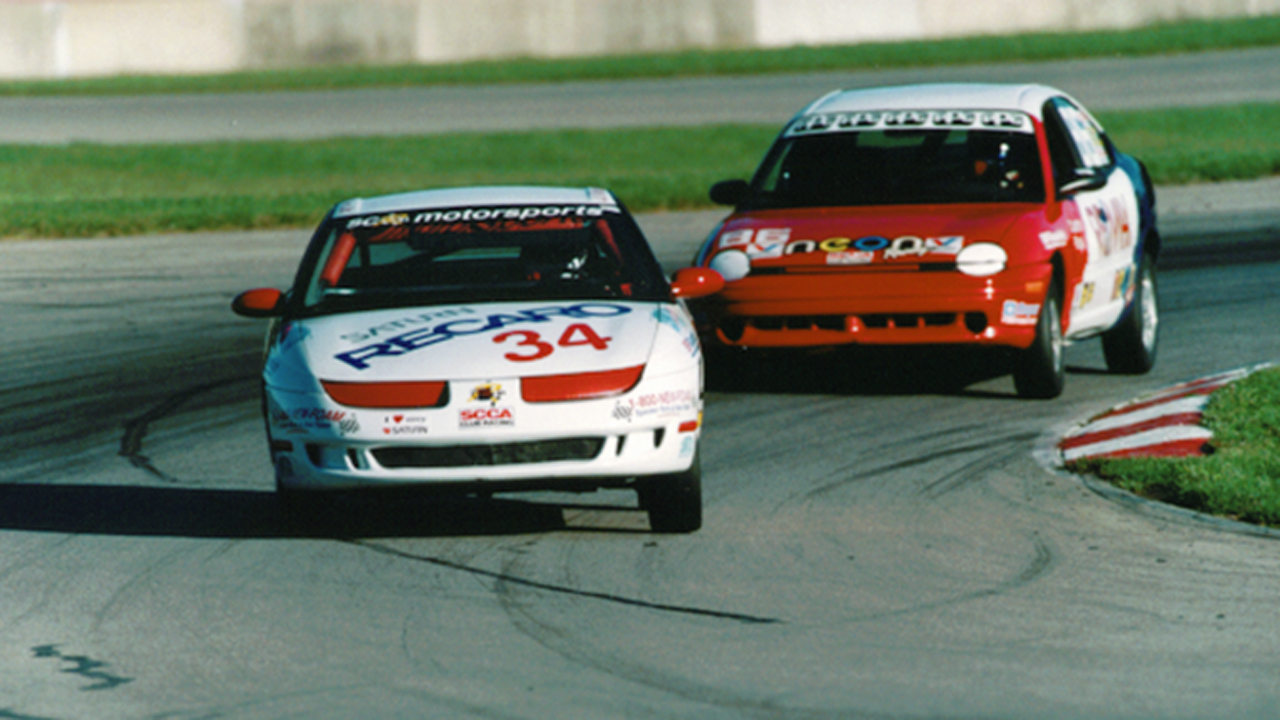 Turns out that of the 14 cars in our class, we qualified 10th. Not bad, but only 1 second out of 6th place in SSC. We felt confident that with a good start on Sunday and some intelligent driving, we would be able to improve our finishing position. Objective #2 almost accomplished, but close enough!

Saturday evening the car was checklisted and put to sleep early. Our race was scheduled for 10:00 am Sunday morning, and a good night’s rest was mandatory!

Driving to the track Sunday morning was not very encouraging. The clouds which were absent all day Saturday were rolling in fast. We bagged the warm up session and prepared for rain, hoping it would never materialize, but after getting drenched a few weeks earlier at M-O, we knew not to be overly optimistic.

Drizzle, drizzle, drizzle. We must have evaluated the weather every 5 minutes prior to the grid. Our do loop sort of resembled the following cycle. 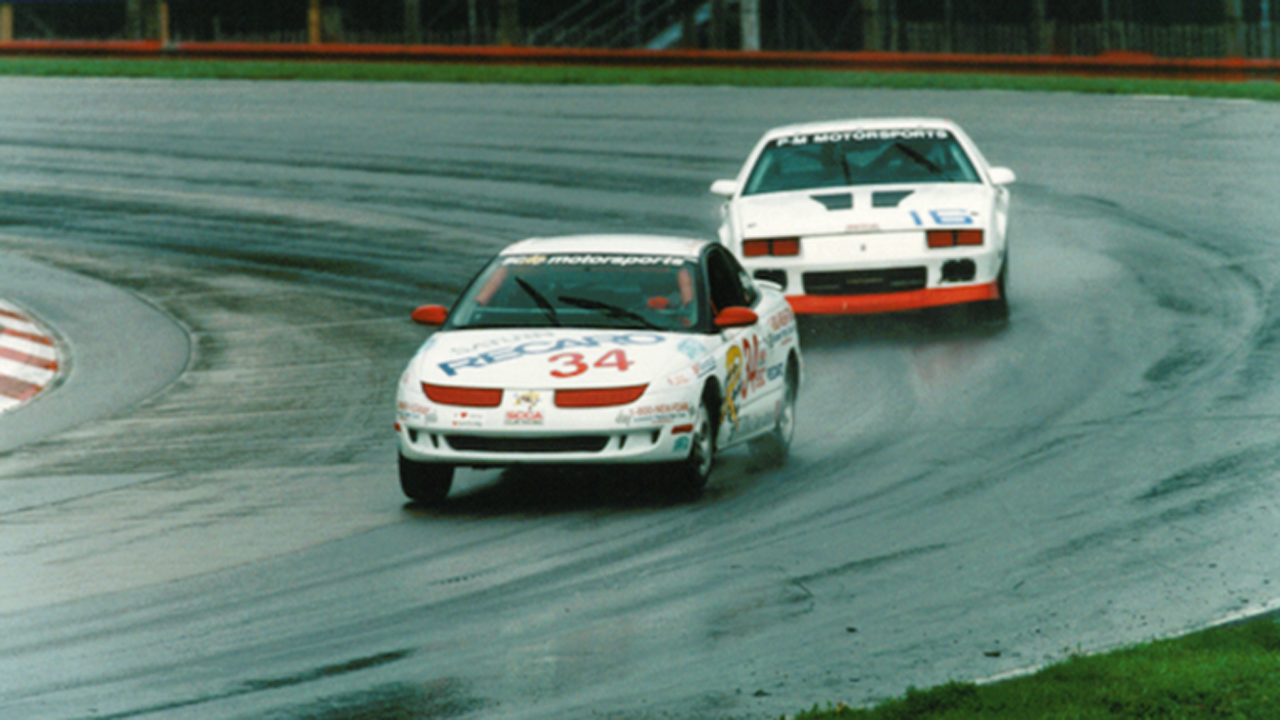 Finally, with 10 minutes before the start of the race, it appeared that the rain might not get much worse. We (as did almost every other car) gambled and went to the grid with shaved race tires. We should have proceeded to step 2.

As the pace car took to the track, the heavens opened. One learns quickly that the concrete at M-O is not the stickiest portion of the track. Some of us found out on the pace lap. Oops – guess that’s the rest of the field coming at me…

So anyway, the green flew and the carnage began. By the time I got to corner 1 the waving yellow was, well, waving. The next 30 minutes were pure excitement. Pure stress. Pure anxiety. Pure water.

The only real excitement came on lap 4. A fast SSB Nissan had spun 5 or 6 cars in front of me and was working his way back through the field. As he came up on me in turn 10, I planned to drive the line and let him by on the inside. Well, he dove down under me trying to take the line away from me. I reacted by hitting the concrete patch right in the middle of the turn, trying to hold the car on the track. I ended up rotating clockwise quite rapidly – hey look, he’s pointed at me – nope, there he goes – hey there he is again – so that’s where the corner workers stand – wasn’t that Neon behind me – I thinks I’m getting dizzy…

So, the Nissan, in an attempt to avoid the spin “he created”, dove into the gravel trap. No damage done, but he was stuck really good. I ended up on the track, pointed in the right direction, engine still running. Throttle, shift, go! Didn’t lose a single position!

The race ended after 13 laps. We finished 8th in class simply due to attrition, but hey – we’ll take it! Any day in which you can spin twice, walk away unscathed, and improve your finishing position by 2 places is a good day. We even improved our overall finishing position from 48th to 38th! Yahoo! 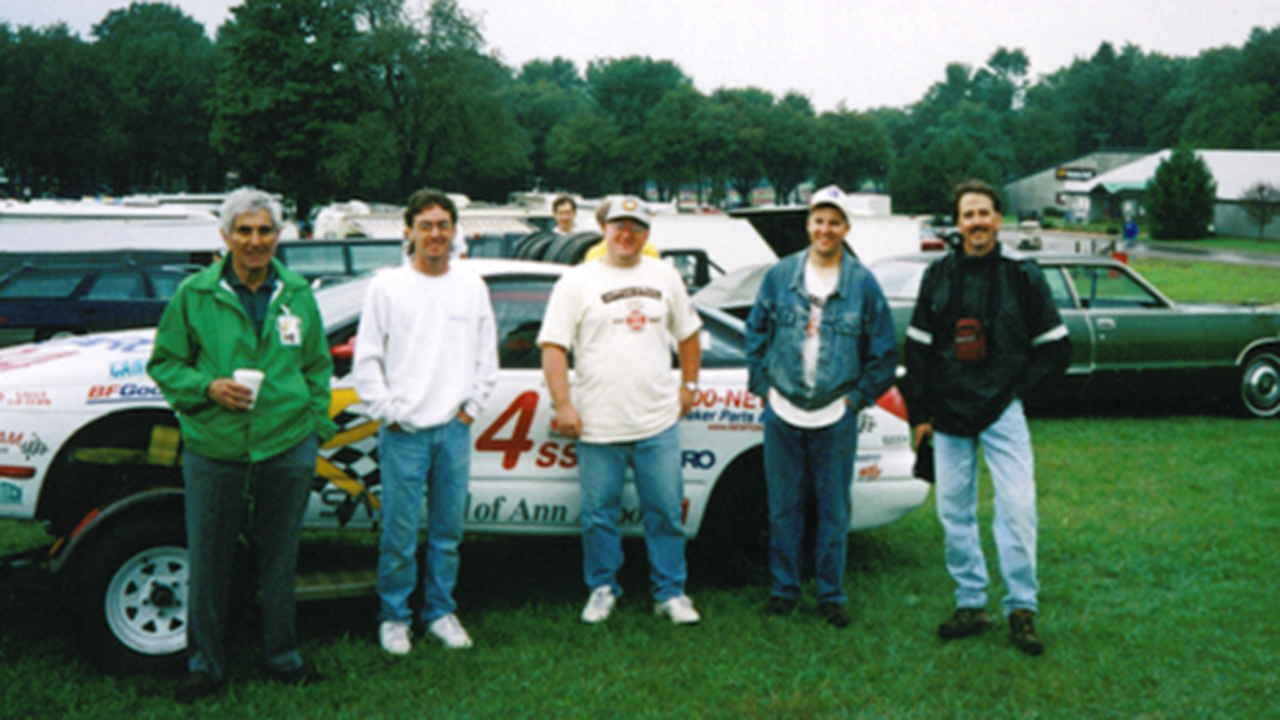 That’s about it. Our first National, and we walked away holding our head high. Of course, qualifying 2.8 second off of the pole is quite a gap to overcome, but it was only our 7th race. Ever. The unofficial decision is to run more National events next year, but we need to let that notion ferment over the winter.