By now you would think we were tired of this track, but each time we manage to learn something new. There’s probably something to be learned from that, but make your assumptions. I love this track, man!

Another first for team scR this weekend…

…our first tire wall. But now I’m getting ahead of myself.

What a turnout! Altogether, 7 willing, able, and generally nuts crew dudes joined in the action. Tony and Barb Benedict, Pete Bovenzi, John Teague, Bob Liu, team scR CFO (chief financial officer) Dana Walker, and crew chief Tom McCready did their best to prep the car, motivate the driver, and share in the festivities. Thanks, guys (that’s a gender-neutral ‘guys’) – without your support I would still be trying to figure out how to set up the canopy! 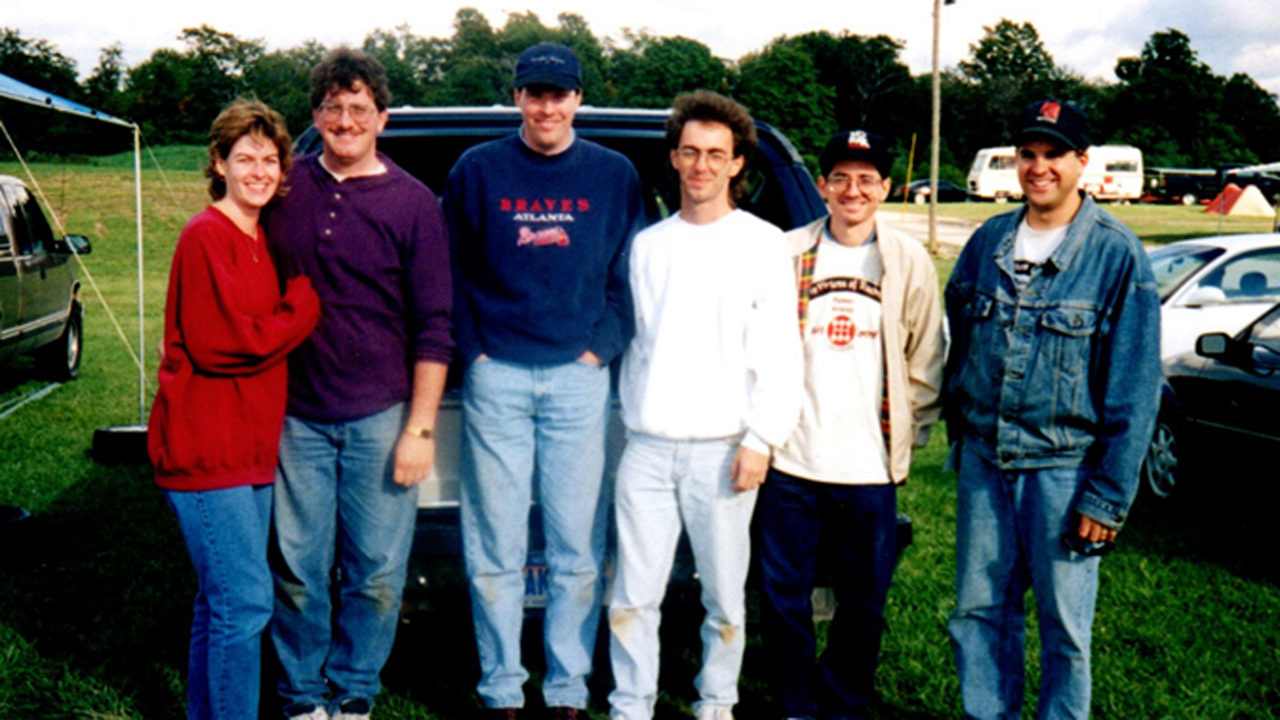 Only three points of interest to report out regarding Friday:

• Pete got lost getting to team scR headquarters (my house).
• Tony, the drag racing machine, dusted a 3rd generation F-car with his 1990 Suburban – with 4 of us riding shotgun in downtown Mansfield.
• The waitress at Applebee’s wanted an autograph from the race car driver. She got a good tip.

Saturday morning, we were scheduled to practice from 8:30-9:00. Of course, it rained from 8:25 until 9:05, and everyone knows just how much I like to drive in the freakin’ rain. This time we were prepared – we actually had the rain tires on the car BEFORE we went to grid. Unfortunately, the rain wasn’t very heavy, and there was just enough oil on the track to make it slippery as hell. I don’t think that the tires were ever really connected to the track. It felt like I was riding on a hockey puck most of the session. Didn’t help much that we were running with E, F, G, and H Production cars – you know, the ones that use 2-stroke motors and throw oil EVERYWHERE?!? I could see little rivers of blue floating across the track in several locations. 20 minutes later the session was over and we headed back to the pits, wet, cold, and cranky. At least we were in one wet, cold piece.

For qualifying, we decided to gamble and run the dry tires. By some small twist of fate, the sun poked through as we sat on the grid. Amazing. The track was still drying out – the racing line was pretty dry, but the rest of the track was still damp. Mental note: stay on line.

As the session progressed, my confidence level grew higher and higher. Consequently, my lap times got lower and lower – until lap 6 that is.

I really wish I could blame this on someone else, but I can’t. I’m no good with turn numbers, but right before the Mid-Ohio carousel, there is a very fast, sweeping left hand turn. Very fast = 80 mph+. In the dry I can make the turn flat out – no braking required. Due to the rain, I had been slowly working up to this. On lap 6 I figured the track was dry enough to give it a run. Here we go.

Turns out that the track was dry enough, if I stayed on line. I turned in way too late and missed the apex by about a million feet. Not fatal, but I ended up going off the track at the outside of the turn exit – 4 tires in the wet grass. Not the best time to try to either turn or brake.

I eased the car back on to the racing surface at the entrance to the carousel. Unfortunately, I entered the track well past the start of the braking zone for the carousel. Translation – I was going in to the turn way too fast. Brake, brake, brake, turn, turn, turn. Spin.

It was like slow motion. Heading exactly backwards at 30 mph on wet grass, one learns that wet grass can actually accelerate a vehicle (this is a little-known fact discovered by all race car drivers at some point in their careers, I’m told). The only thing left to do was to surrender and hang on for the ride. 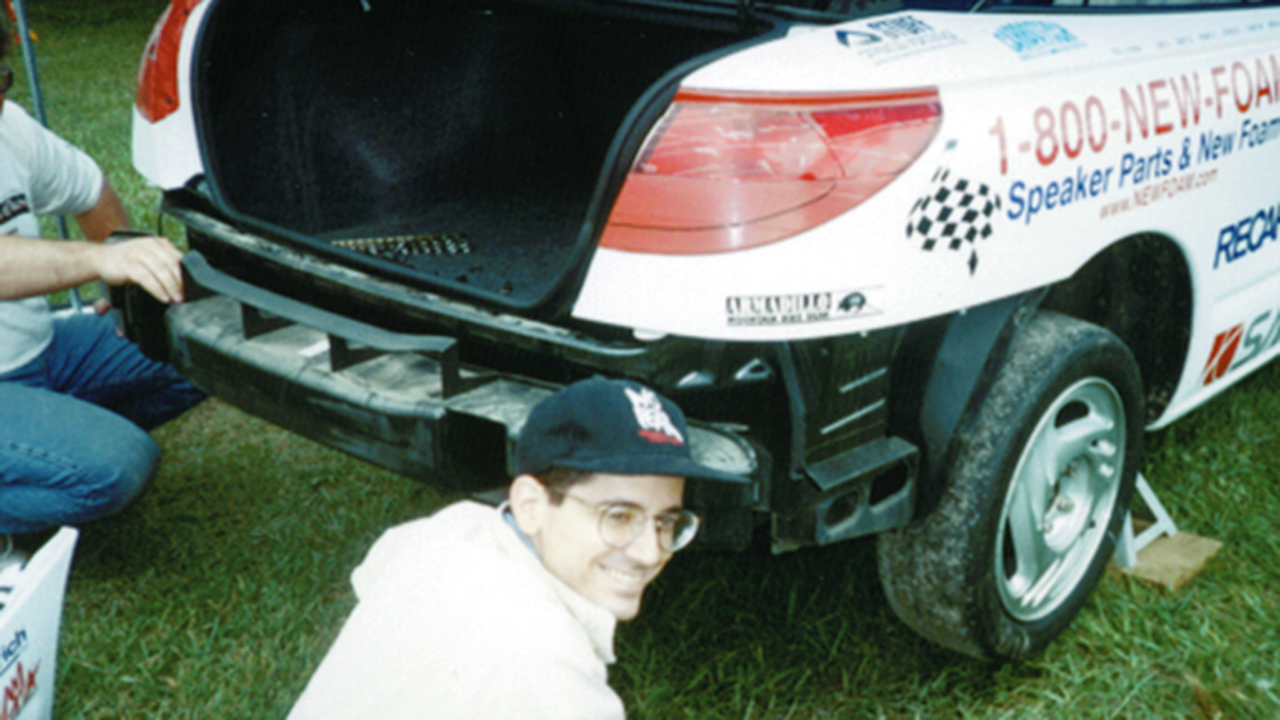 Well, I felt just fine, and there was no sickening “crunch” sound like I was expecting. I turned the car around (I had kept it from stalling) and got back on the track. The car felt OK from the driver’s seat, and nobody threw a black flag at me, so I figured no harm done. Two laps later the session ended. The panic didn’t really start until after I was out of the car.

Inspecting the car revealed no structural damage – just a little bit of rubber from the tires on the front fascia. The rear fascia appeared to be tweaked, but removal and reassembly cured all ills. A trip to the alignment pad revealed that everything was still pointed straight. Whew. Let’s hear it for tire walls.

Saturday night we learned that Tony is one of the most intelligent people in the state of Michigan. Did you know that in the state of Utah, Potassium di-chloride and Ammonium tri-phosphate is a regulated substance only to be disposed of after 6:00 on Tuesdays? Tony did. However, he fell from grace when he ordered a dish of ‘white ice cream’.

Speaking of which, in searching for the local Dairy Queen, we learned that the people who designed the road systems in Mansfield, Ohio were into heavy drugs.

The DQ is adjacent to a Kawasaki dealership. In the front display window there was a shifter kart on display – a 120 MPH go-kart, if you will. Of course we had to go inspect this awesome piece of speed equipment. 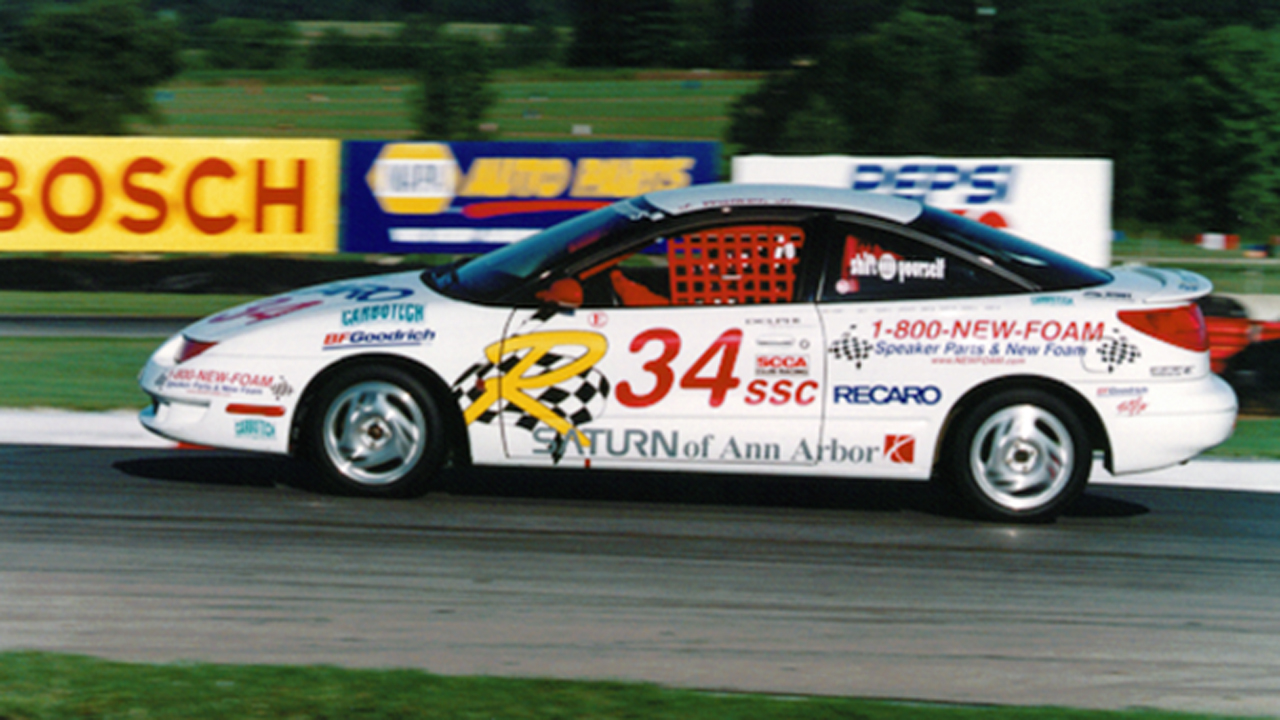 Sunday: race day. Turns out that out of 10 cars in SSC we qualified 5th, 0.1 seconds out of 4th. The Neon in 4th was gridded directly in front of me. We agreed not to race each other for the first 3 or 4 laps in attempt to chase the 1st, 2nd, and 3rd place cars – theory being 2 cars are faster than 1.

That theory works if the car in front is faster than the car following. For 4 laps I ran right behind the Neon. Only took 2 laps to realize that I was faster than he was. On lap 5 I drafted him down the back straight, pulled out at his braking point, outbraked him to the corner, and never looked back. Just like in the textbooks, man!

To make a long story short, on lap 13 of 14 I passed the 3rd place Neon who was having some kind of trouble – he was waving everyone by. Lap 14, checkered flag, 3rd place! Yahoo!

Oh yea – during the race on Sunday, team scR posted its best ever lap at Mid-Ohio. Up to this past weekend, our best ever lap time was a 1:55.0. The race summary follows:

To put the icing on the cake, the Honda who finished in 1st place never showed at impound. Claimed he ‘didn’t realize that there was impound’. Never mind the fact that he had raced at Mid-Ohio 4 other times this year. The Chief Steward penalized him 1 lap. By default, we inherited 2nd place! Bigger yahoo! We’ll take it!!

So, there you have it. 10 cars, 2nd place in the Divisional Championship race! Crew, I couldn’t have done it without you!

Now all that’s left is this coming weekend at Blackhawk Farms. Seven people will again make the journey on Friday. It’s a double regional, so there should be a decent amount of track time. Since we have never even seen the track before, the objectives are: