Ah – our season finale at Blackhawk Farms. What a way to close out a great rookie season. Too bad all these tracks are so far from home!

Blackhawk Farms is a 1.8-mile road course located in Rockton, Illinois. Depending on who you ask it’s a 5-hour (my estimate) to 7-hour (everyone else’s estimate) trip. We managed to do it in about 7 hours – that is, John and I did it in 7 hours. Dana and Walt (who should have been following us more closely through Chicago) ended up losing us and showing up to the track 1.5 hours after John and I arrived. While that sounds pretty amusing, Ed and Chris (who left separately from Saginaw) couldn’t even find the track or our hotel on Friday night and ended up getting their own room for the night and finding their way to the track Saturday morning.

After arriving at the track Friday night and waiting for Dana and Walt, the four of us took a 11:00 pm track walk in the dark. We quickly learned that instead of nice metal Armco barriers as traffic control devices, the owners of Blackhawk chose to use really big trees. Trees located not even 30 feet from the racing surface. Trees that grew over the front straight so low that they obstructed (partially, anyway) the view of the starter’s stand from turn 7. Not exactly the kind of place where you want to make a bunch of off course excursions. Especially not off turn 2 into the swamp.

Ed reminded us that “if you do go off into the swamp, just remember to hold your breath”. Keep in mind Ed also was overheard saying “if you crash on your motorcycle, make sure to hold your head up off the ground as you slide so that you don’t scratch the paint – helmets are expensive!”.

After the course walk, we gave up waiting for Chris and Ed and headed back to the hotel. In the time since the official track hotel listing was made and when we made our reservations, the hotel was abandoned by Motel 6 and was re-opened by some chain called “Sixpence Inns”.

It was a total shithole. 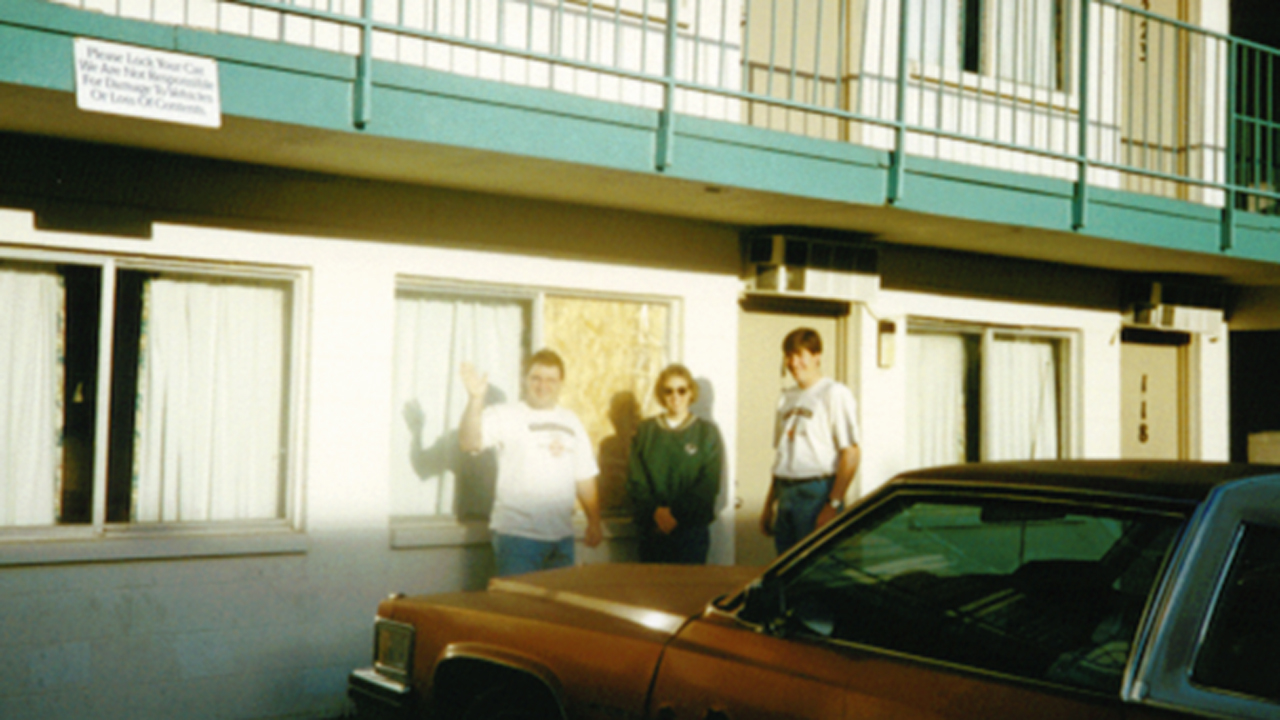 After getting our keys and inspecting our rooms we debated sleeping in our cars. Unidentified stains were spotted on the walls and ceilings of both rooms. We wore sandals in the shower for fear of catching something fungal. Or even catching a small animal. The windows on the floor beneath us were covered with plywood – probably the result of a late-night drive-by shooting. The towels were recycled 600 grit sandpaper. And to top it off, there were no mints on the pillows. Imagine that!

The next morning, we could not leave soon enough. We packed everything up, not expecting to ever return again.

Pulling in to the track at 9:00, we found Chris and Ed circling the paddock area looking for our set-up. After laughing for about an hour at everything that had gone wrong so far, we settled down and began prepping the car for qualifying. The early registration listing showed only one other SSC car in the field – a Neon (imagine that!) from a town just 15 minutes north of the track. We figured he was a ringer (SCCA Pro Racing stickers on the car), so we didn’t set our sights too high for our first session on the track.

When the green flag flew for qualifying the brakes felt different. Not much worse than they had at any other track, but at Blackhawk, good brakes are really important! The pedal just wasn’t my friend as I tried to manage my way around the track. And besides, the trees loomed large on either side. I was really scared! When the checkered flag finally flew, I took a deep breath and brought it into the pits, happy to be in one piece. Time to look at those brakes…

Before the race, the awesome team scR crew (again: Dana, Walt, Ed, Chris, John, and Jeff (the new guy)) replaced front linings, rear shoes, cleaned up the front rotors, bled the brake fluid, and readjusted the rear drums. There was nothing left in our bag of tricks as the race drew near. Walt took it for a spin around the paddock and stated that the pedal felt “100% better”. Yahoo!

3:30. Race time. As we were going to grid, I checked the brake pedal frequently. Walt was right – it sure felt better! The Neon to my right was ours for the taking…

The green flew and the field accelerated down the front straight. The Neon (on the inside at the start) tried to pass a bunch of slower cars on the inside of turn 1, but ended up having to slow. He pulled up alongside of me in turn 1. For the rest of the first lap we were door handle to door handle, neither one giving an inch – this was probably my best racing all season. On the exit to the main straight I got a good run and pulled him down the entire straight. I passed two other cars in the process and put them between us. Only 14 more laps to go!

For 3 laps I was the SSC race leader. You see where this is going. On lap 4 the brakes (turned out to be the booster / master cylinder interface) decided that enough was enough and that I was having too much fun. They decided this going into turn 1. The car ran way wide. Way, way wide. I managed to collect it and bring it back onto the track, but had let the Neon gain some ground.

Braking for turn 3 – same thing, but kept it on the pavement. I was now driving scared – no confidence in the brake pedal, trees everywhere, and a damn red Neon coming up fast from behind.

To make this painful story short, the Neon passed me and continued to pull away. I drove my butt off trying to keep up, but it just wasn’t safe to do so. For 10 laps I fought the car going into every corner. Brakes, brakes, brakes!!!!! The end result was that I never lost sight of him, but he beat me to the checkered flag by 4.7 seconds, and in trying to catch him I managed to better my qualifying time by 0.5 seconds – we had a best time of 1:32.1. The closest we had been to victory all year! Pulling in to the pits I was ready to collapse in the seat. Once again, just happy to make it home in one piece. 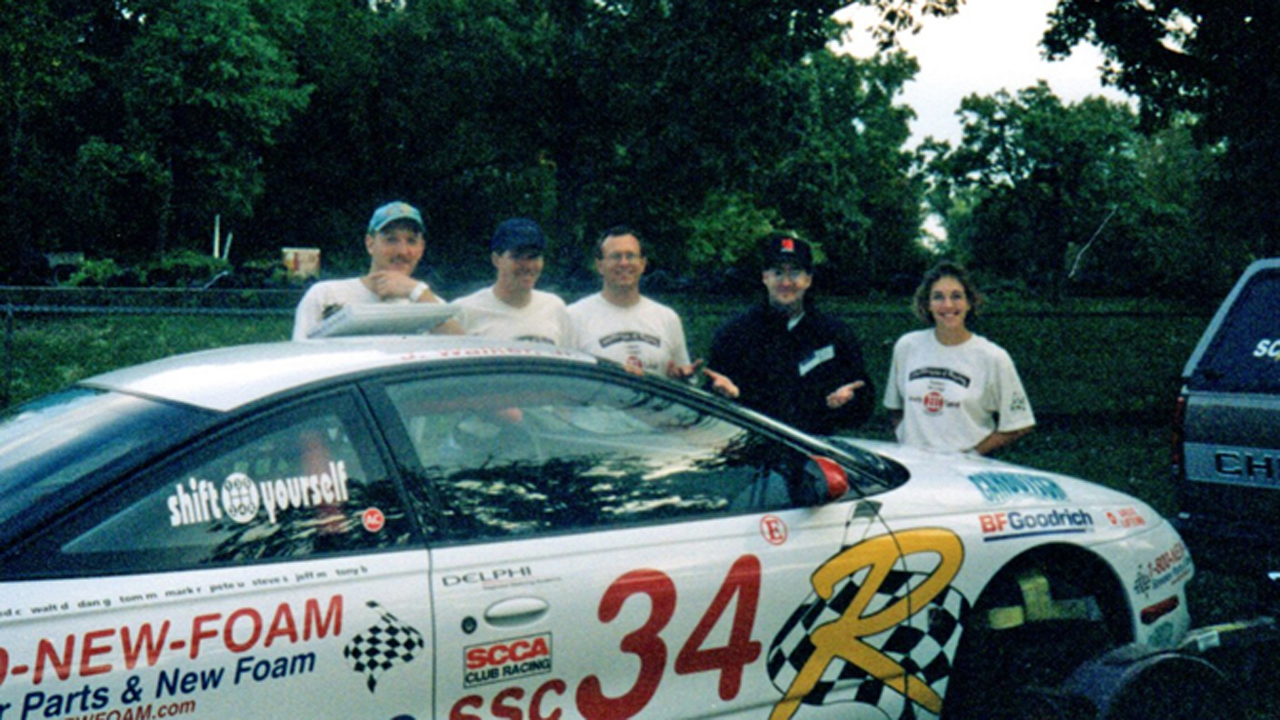 After impound (we did finish second after all), we jointly decided to pack it in and bag the Sunday race. The car was unsafe to drive, and we had no other ideas up our sleeves. Not exactly how we wanted to end our season, but in retrospect it was the best thing to do – it rained Sunday afternoon.

So, there you have it. The 7-hour (5 hour?) ride home allowed me to think back on the season as a whole and in doing so, I came up with the following list of things we accomplished as a team. I think we all have reason to be proud…

• Built a race car from the ground up and didn’t get disqualified in tech
• The yahoo behind the wheel got his National racing license
• The car finished every race in which it started – no mechanical DNF’s
• Started 9 races, 7 podium finishes (in the top 3)
• Ran a National race and didn’t finish last – we even got National points!

Not bad for a bunch of rookies! With the exception of Dan, none of us – not a single other person – had ever been thrown into this situation before. Thank you one and all for a job well done!

So now it’s time to plan for 1998. Sponsors, you still game? Of course, there is still this picnic thing to attend to…plan on a bunch of bench racing this Sunday. Hope to see you there! Maybe we’ll work on the brakes some more…