Where does the time go? 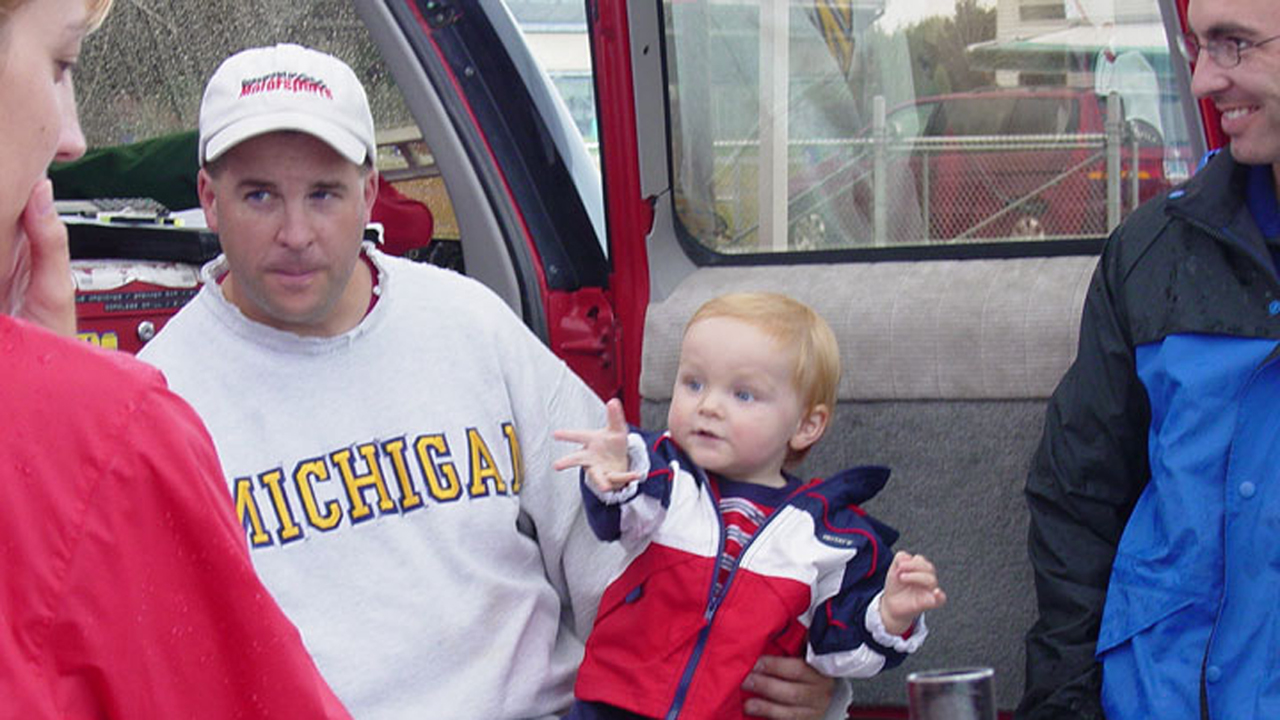 The teenager before he was a teenager. Taken at Watkins Glen, 2003.

On Tuesday last week, we dropped the teenager off at Texas A&M University. In four short years (we hope) he should emerge as a bona fide mechanical engineer. While he is away studying, I doubt he will have much spare time to continue with his writing, but as his going-away gift to you, here is his take on our lousy weekend at Sonoma.

Do great things, Zack. We’re cheering for you!

Q: Is it time for the teenager’s newsletter already?

*looks around with a confused face*

What teenager? I turned 18 several weeks ago. You may start referring to me as a “young man.” 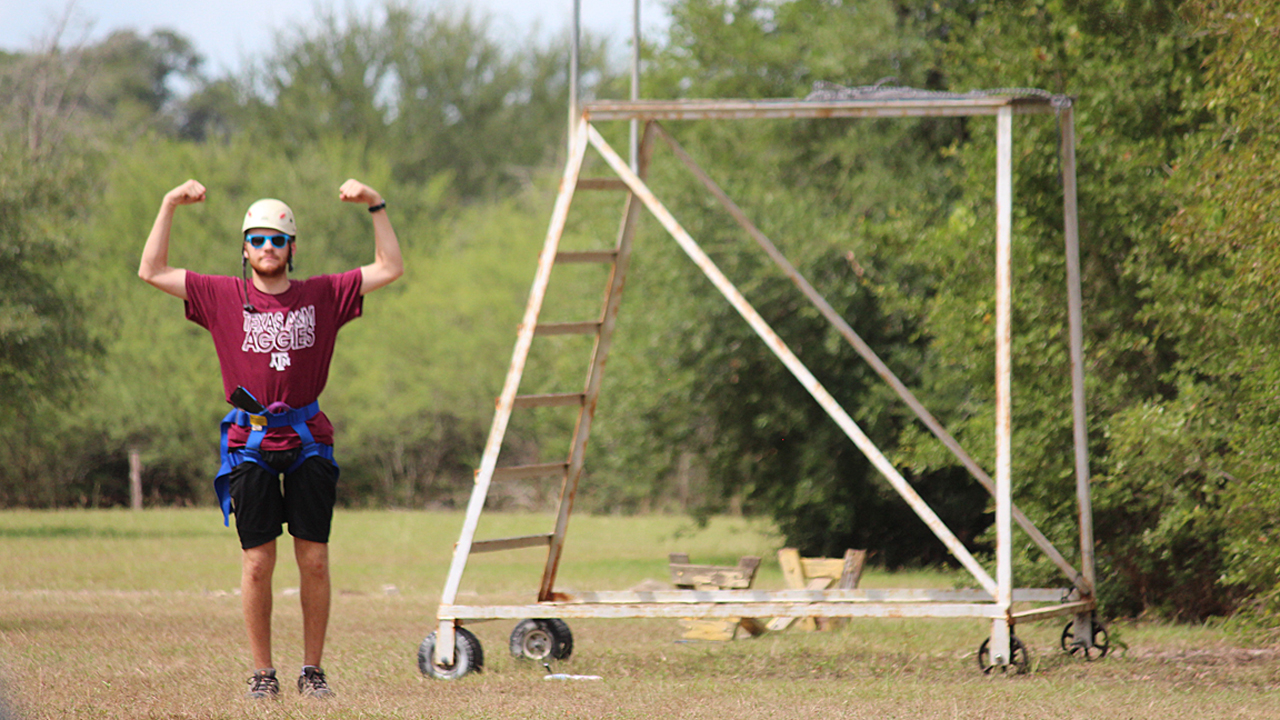 Of course, this new title is not to be confused with “maturity.”

Q: How about that consistency?

For the purpose of this exercise, we’re going to pretend Florida doesn’t exist. 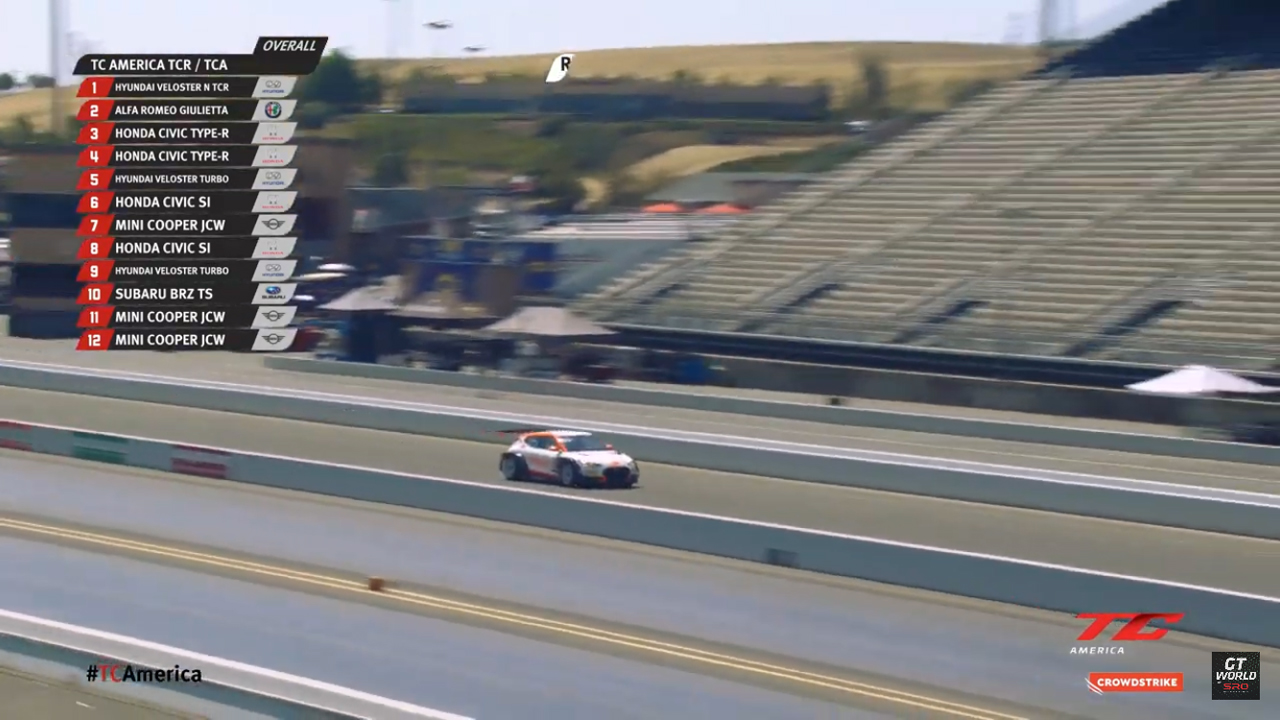 The Veloster wins its 8th consecutive race to kick off the TCR season! Same car, different driver. The Ginger is probably off doing bigger and better things this season.

A: You must not be a real fan.

Q: Oh, right. At least there wasn’t any vehicle damage?

A: I guess that’s one way to look at it. No udgy-budgy for the Red Line Oil Machine this weekend.

A: No udgy-budgy for the Red Line Oil Machine this weekend.

A: One of the announcers’ favorite things to say when there’s a collision is, “Oh, looks like some lardgy-bardgy down in turn five!” or something like that. Except the announcer, Cal, is British, so when he says it, it sounds like “udgy-budgy.” Highly amusing. 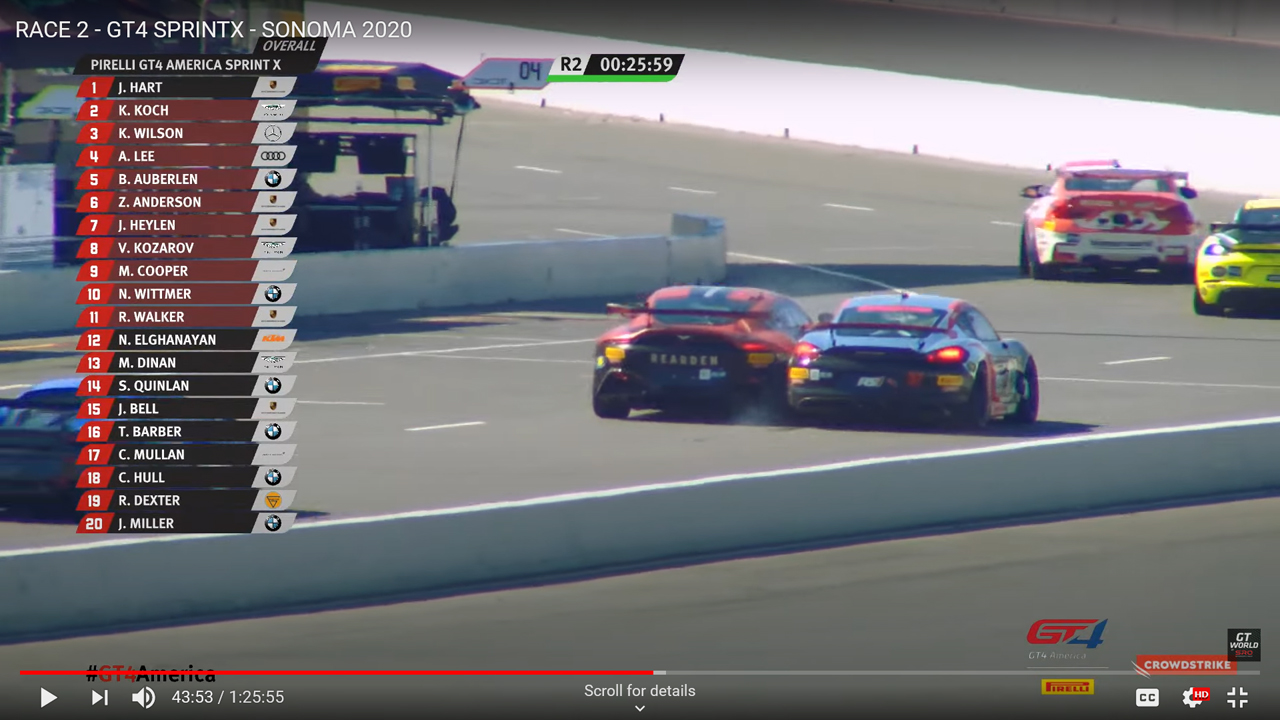 This is what udgy-budgy looks like. And yes, this is on pit lane.

Q: You’re not allowed to call him Cal.

A: Sorry about that, Mr. Fish.

Q: Why would they get into each other on pit lane?

A: Maybe they just wanted that drive-through penalty. There were several drive-through penalties handed out on Saturday. Two for that bit of udgy-budgy (sorry, I really like typing that), one for another collision involving that same Aston Martin, one for a missed pit window, and one on Sunday for a pit-speed violation from the Flying Lizard McLaren. 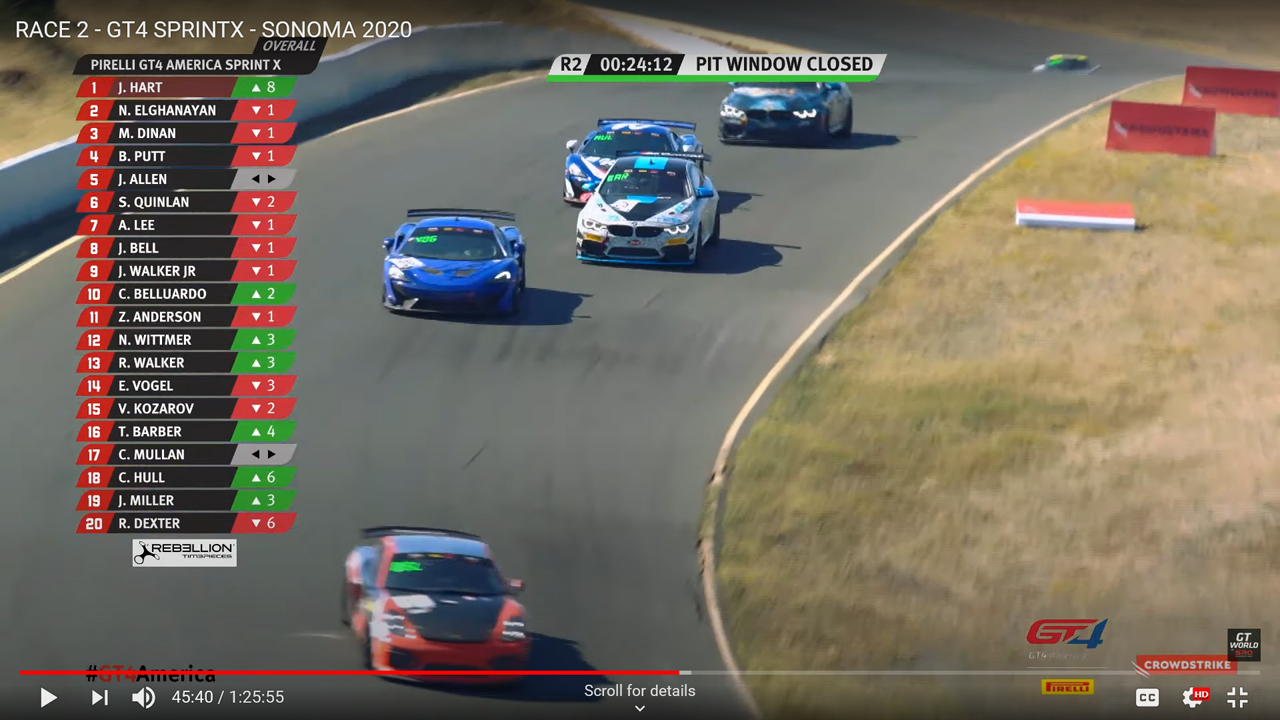 “Pit Window Closed” and a red bar across your name are not two things you want to see on the screen at the same time.

Q: Did the #47 really blow the pits stop window?

A: Considering the championship standings, BimmerWorld was fortunate that this was the same #47 that is currently leading the series points. So, there was a small break in our favor. But the penalty we’ll all remember is… 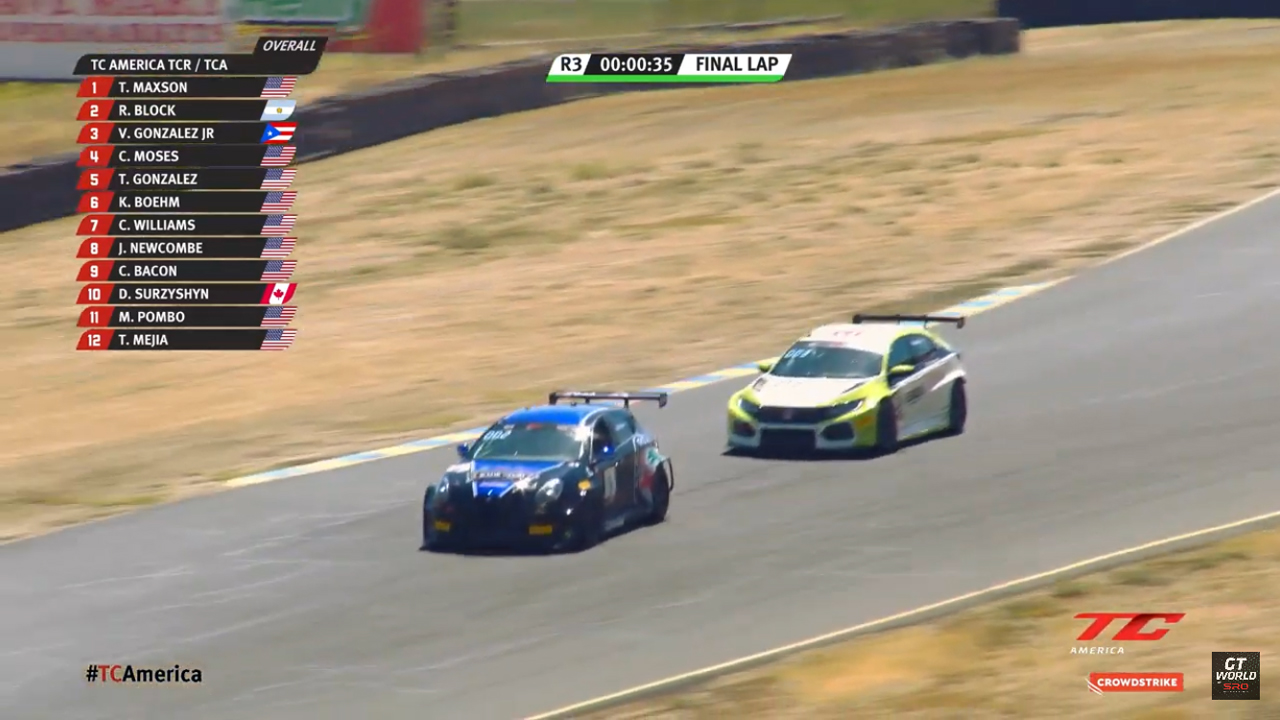 Another Alfa podium finish at Sonoma. He finished second. No word on the possible presence of pooping sheep.

Q: It’s always something, isn’t it?

A: It is indeed. I think the #82 came out of the pit stop in tenth overall, and then they were informed of the penalty. Oh well. Stuff happens. Consistency was maintained either way.

Q: How did that weird-looking car do?

The KTM X-BOW had mechanical issues on Friday and Sunday, but managed to snag an overall win on Saturday, so congratulations to them. The X-BOW has less horsepower than most of the other cars, but it has great handling, so it’s speedy on a twisty track like Sonoma. And for any curious fans who might see it and ask, “What’s that?” we present… 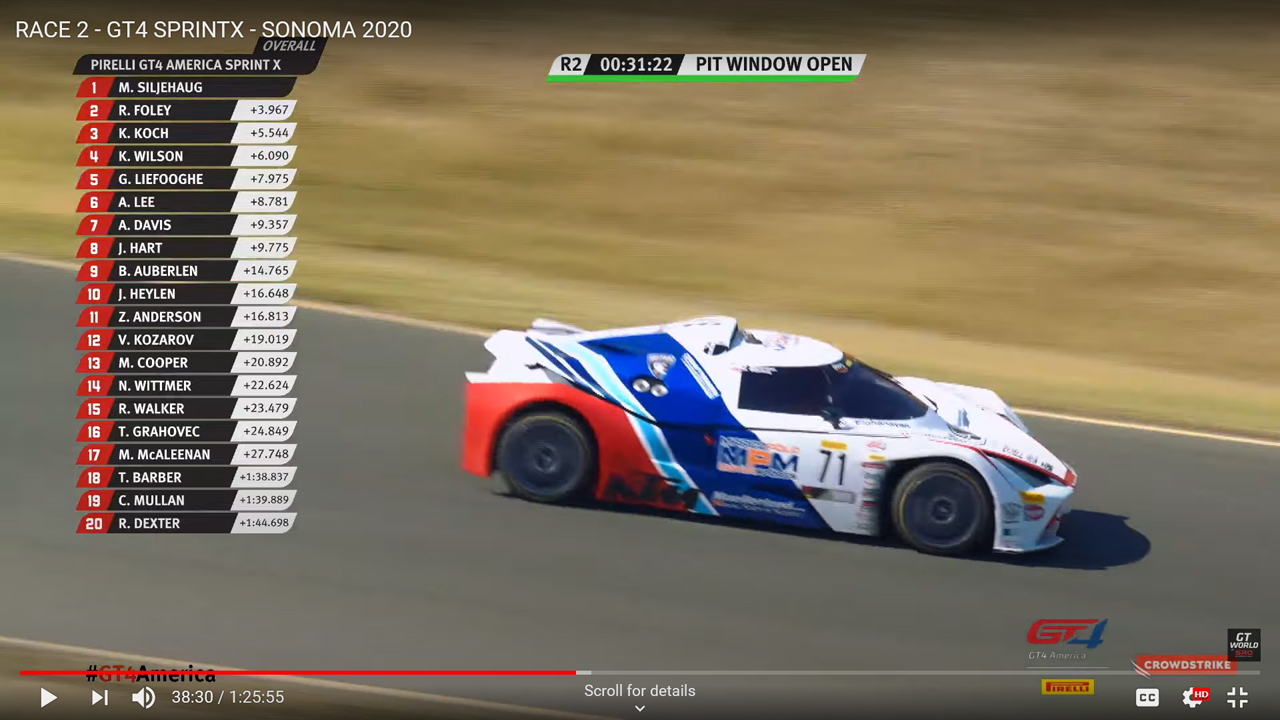 It’s hard to see in this picture, but the roof says “It’s A KTM.” For those of you who aren’t well-researched on small Austrian car brands, I guess. In our hearts, it is still the Lego Car.

Q: Why is that car so different than all the rest of them?

A: I have no idea. Maybe it needs to be in a class all by itself. And it is cooled by some cutting-edge technology as you can see here.

Q: Are there any more interesting cars we need to be aware of?

A: For the first time in history, scR motorsports will be competing directly with one of the all-time-greatest classic rock bands! Doesn’t that sound exciting? 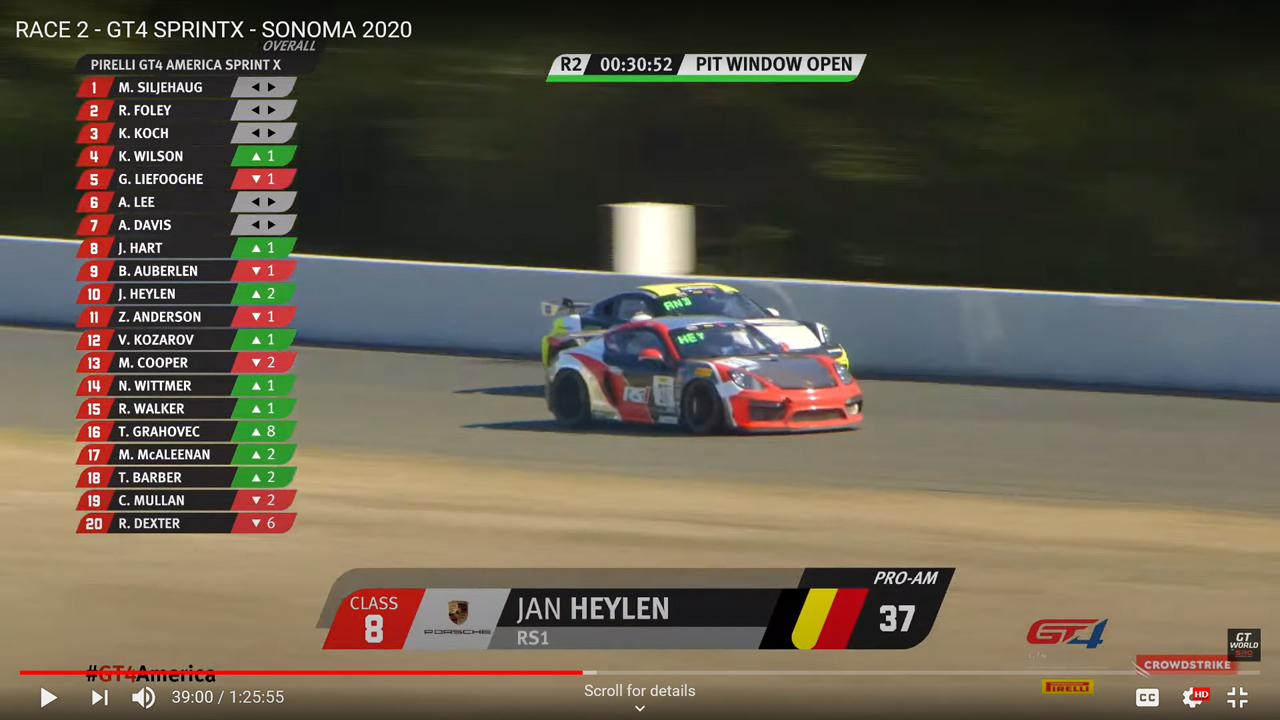 Oh can’t you see me standing here, I’ve got my back against the record machine…

[Dad edit: That was a stretch, but I’m going to let it ride.]

Q: Did anything exciting happen for #82 besides the penalty?

A: ***REDACTED*** got off to a nice start on Saturday, but the car setup wasn’t quite there for him to make a more serious run up the field. There wasn’t any udgy-budgy to speak of, either. The most thrilling part of the weekend was probably our drag race versus the orange BMW to end Sunday’s race. The delta between 10th and 11th place was one one-THOUSANDTH of a second. That’s 0.001 seconds for those of you who are better with numbers. If the finish line was five inches farther forward (accurate math by the way), the red BMW certainly would have been able to snag a top-ten overall spot, and move up one class position, but it was not to be. The race isn’t posted on YouTube yet so I don’t have a picture of it. But it was almost like….

Q: Isn’t there something missing in this newsletter? 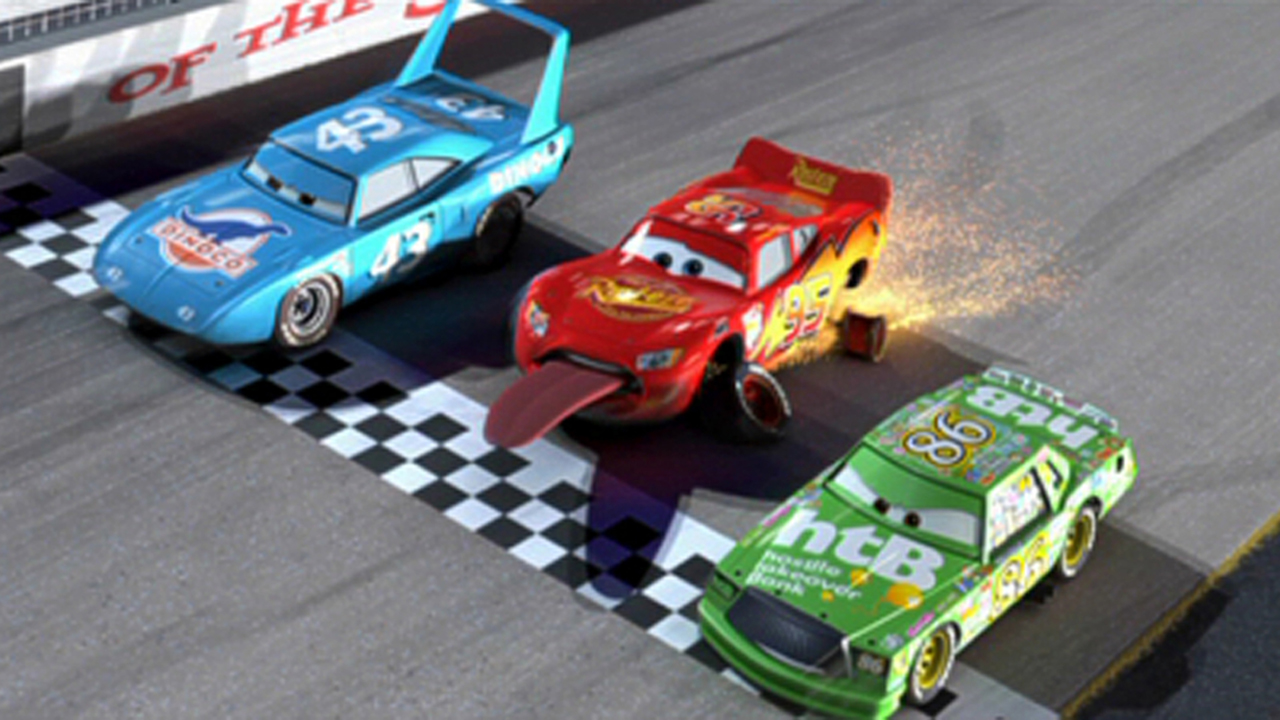 And we don’t even know who won!

Except there were only two cars, and they were the same make and model. But it was that close. From the camera angle it was impossible to tell which one finished before the other. Thank goodness for electronic timing systems.

Q: How did the other BimmerWorld entries do?

A: Ah yes, I almost forgot the snacks! Parenting advice from my mom: never forget the snacks. 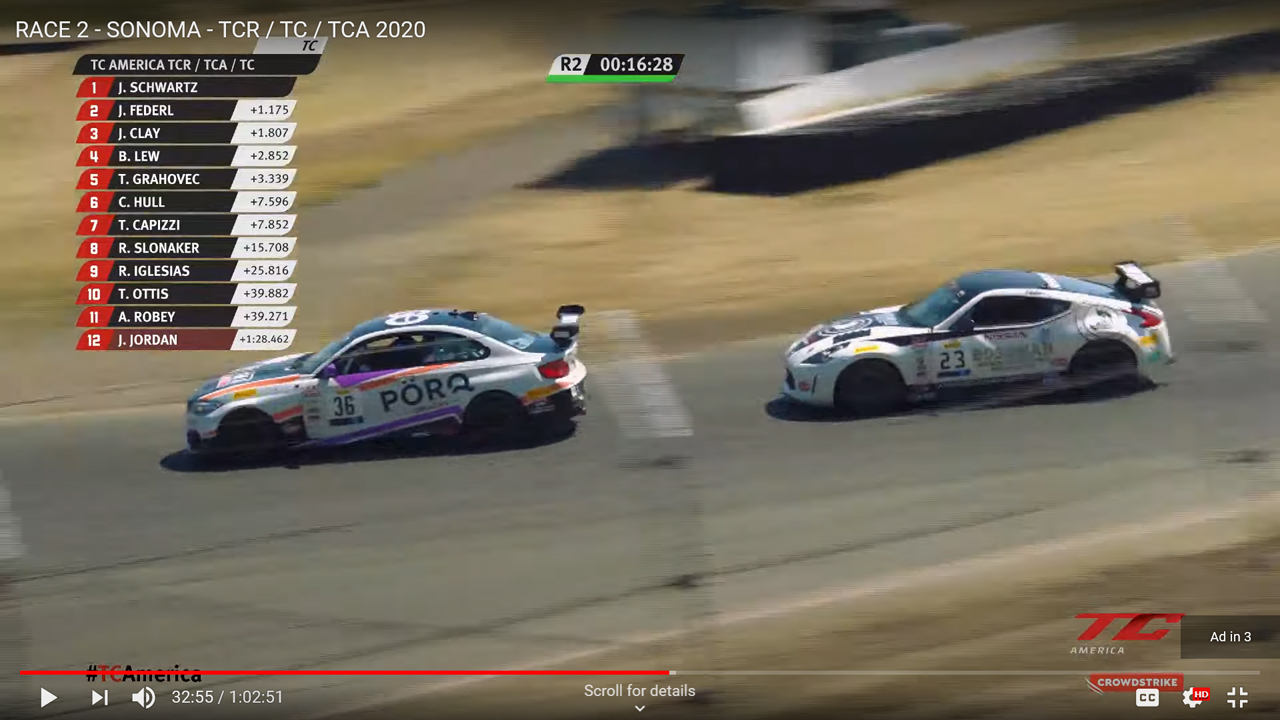 Next year’s sponsor? I’m rooting for it.

The PöRQmobile finished 1st in its first race and finished 2nd in its second race. The power of PöRQ Snacks is not something to be trifled with. Chandler Hull, driver of the #94 TAC Energy BMW, finished 5th in both of his TC races. He’s also driving in the SprintX series now with the Classic BMW team.

Q: Wait, didn’t Dad say you were going away to college soon?

A: He did. Yet another reason to refer to me as the “young man.” Today (August 10, 2020) is my last day at home, and before I packed, I finished this newsletter. My priorities are in order, don’t worry.

Q: Where are you going?

A: These newsletters aren’t about me. But COTA will still be my home track. I will be closer to TWS, but TWS doesn’t count. It’s in about as good of a condition as those Saturns were when they raced there nine years ago.

Q: Has it been nine years?

A: I know, right? Hopefully the BimmerWorld guys never go to teamscR.com and find those ChumpCar newsletters. That would probably make them a little nervous about re-hiring a guy who drove a $500 Saturn for seven hours because it sounded like fun. Very unprofessional. 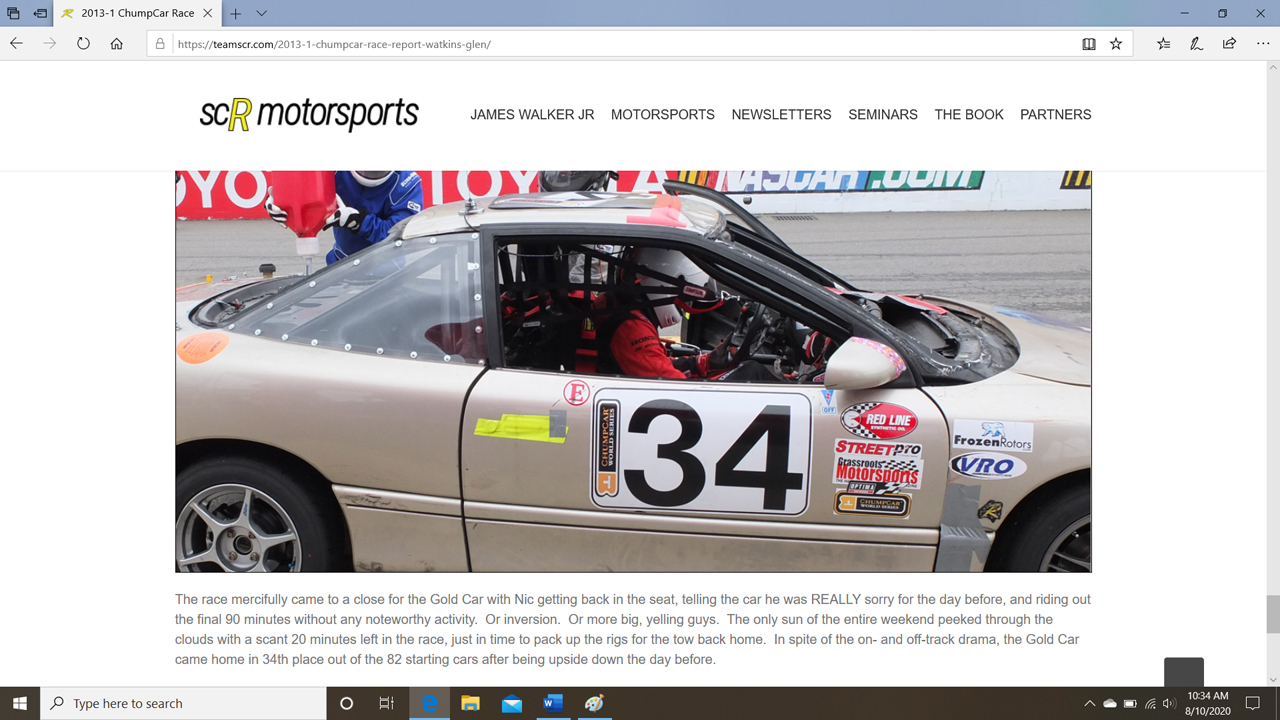 This picture predicted the future.

Q: Predicted the future? How so?

A: The number 34 appears 2 times on that page. That would lead us to the number 234, which was worn by the Ferrari Challenge 458 for 2 seasons. The number 34 was, of course, also worn by the Alfa Romeo for a season in TCR. There is also an 82 in the text, which of course is now worn by the BMW M4 GT4 this year. To the front of the car there is a sticker for Optima Batteries, which is the co-sponsor of the PöRQmobile this year (it’s on the hood). And of course, above that sticker, there is another sticker for Red Line Oil. Clearly, the stars were perfectly aligned when this photo was taken.

A: No. Not everything has a meaning, unfortunately. You know what else is in that photo? Hello Kitty Duct Tape! Bring it back!

A: That’s the spirit. We’ll have some pink band-aids on that M4 in no time. 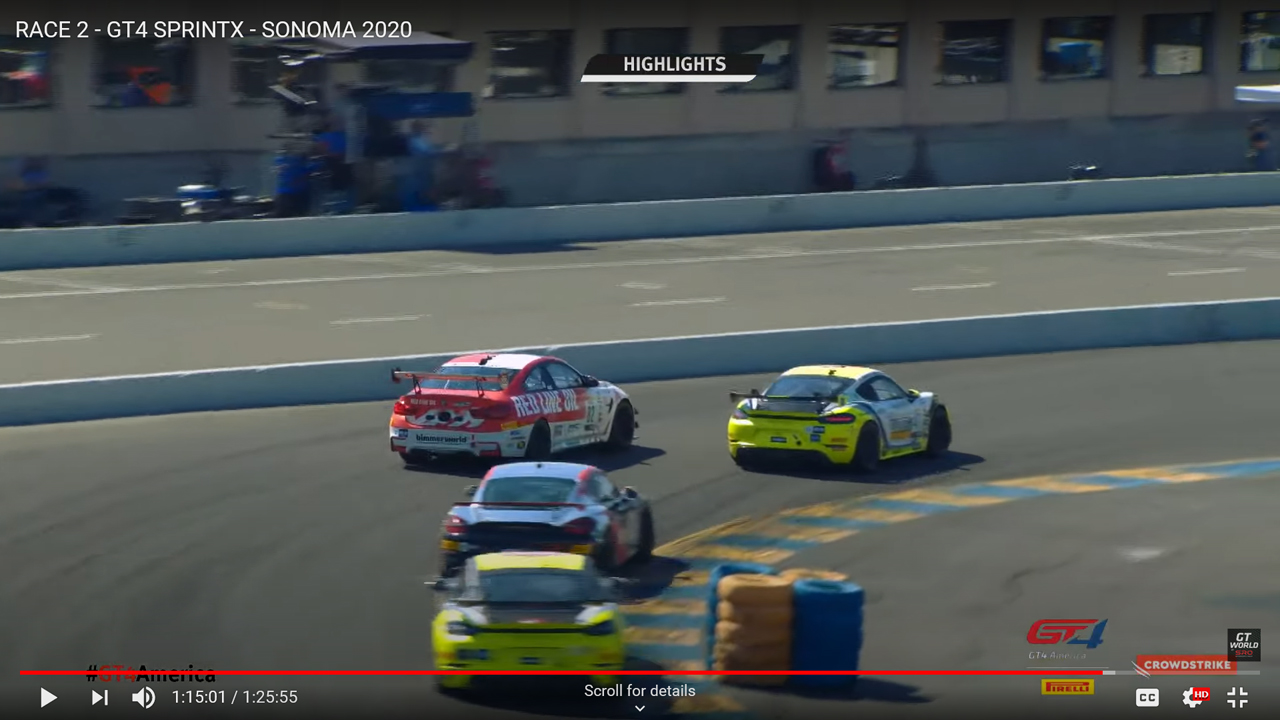 It’s just not as intimidating without the tape.