It all started with a disease.  Or maybe we should call it a “condition” to be more sensitive to the infirmed.  No matter what you choose to call it, the fact that Mark has approximately 26 Saturns (I may be rounding up a little here) littered on and around his property speaks to the enormity of the situation.  It’s a problem in any case, and fortunately not a problem that the rest of us need to deal with.  Except Cindy.  Bless her soul.  The big upshot of the condition (for everyone except Cindy, that is) is that Mark is always looking for an appropriate venue in which to enter a Saturn in some form of motorsport competition.  Be it road racing, ice racing, road rally, or the luge, if it’s possible to squeeze a Saturn onto the entry grid, Mark’s there.  It’s just one of the many reasons we love him. 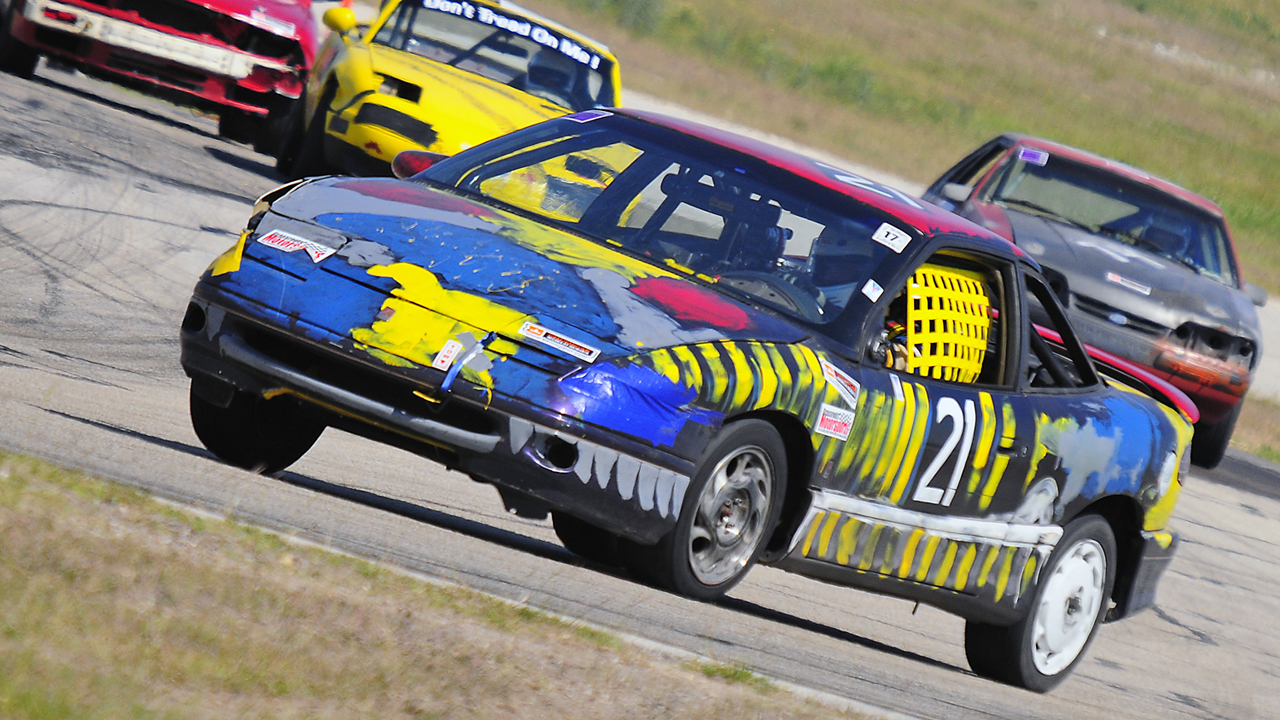 That said, Mark’s latest fetish has revolved around a pair of road racing series that limit the value of the race car to $500 or less.  Not surprisingly, that’s not too hard to do when you are starting with a Saturn.  Or 26 Saturns.  The flip side, though, is that these races last between 7 and 24 hours in length which can be a bit of a, ummm, challenge in a $500 piece of crap.  Think about that for a minute: racing for at least 7 hours in a car that cost less than one rear tire for my GT3 RS.  And that’s before mounting and balancing.

Armed with a plan

In the spirit of putting the band back together, Mark invited me, Tom (our previous scR crew chief), and Pat (our other previous scR crew chief) to co-drive in a pair of back-to-back 7-hour ChumpCar World Series endurance races at Texas World Speedway on April 16/17.  While Mark has been actively racing for years, it would be only my second time going wheel-to-wheel since 2004, and Tom and Pat would be first-time road racers.  As it turned out, over half of the grid had never raced either, so this wasn’t so much of a disadvantage as we had initially thought.

After months of e-mails, phone calls, and intense schedule juggling, the entire crew descended on Houston, Texas on Thursday, April 14th.  It was frankly a bit surreal having everyone in the same place gathered around a race car again, but once the wrenches started turning in preparation it was business as usual.  Women won’t appreciate this, but guys understand: we had a job to do, and although it had been over 7 years since we had run this drill it was like not a day had passed since our last event. 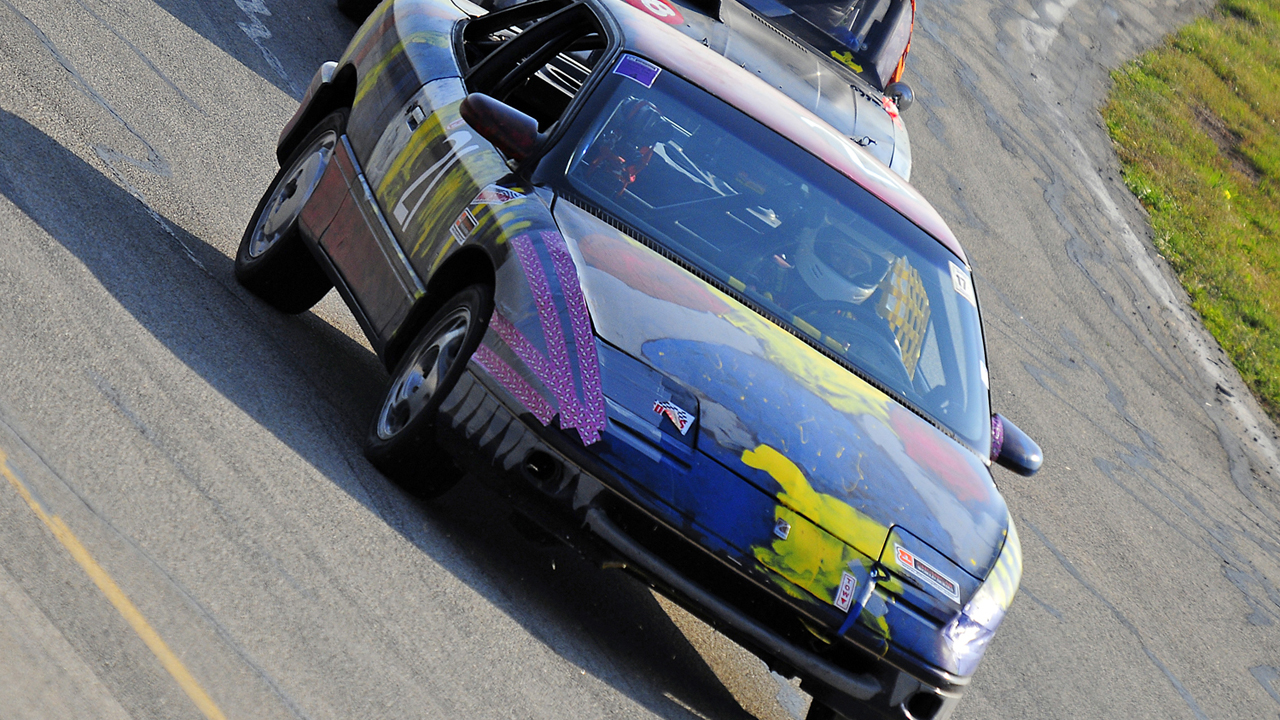 Car prep in Houston consisted of sealing up a leaking cam cover, cleaning up the spark plugs, installing new plug wires, and sucking Sunoco-flavored paper towel fragments out of the #1 combustion chamber with a straw (don’t ask).  It all worked as planned, and we showed up at the track on Friday with high expectations.  Naturally we stopped on the way to pick up some Gatorade and Nutter Butter cookies, because some things never change.

Miraculously, our Friday test day went without a hitch.  Maybe that should be MIRACULOUSLY.  Everyone got in a 30-minute practice session to learn their way around TWS and get comfortable with the car.  It should be noted here that “comfortable” is a relative term used to describe a feeling of ‘relatively less distrust’ and explicitly not to be confused with, “Wow, this car is sweet!”  One should not expect too much from a $500 car, but even with that caveat it exceeded our expectations simply by not blowing up in some spectacular fashion.

Naturally we dined that evening at Outback Steakhouse followed by Blizzards at Dairy Queen, because some things never change.

So, cut to race day.  Approximately 43 cars were called to the grid at 9:00 am for a flying start.  With the expected madness and mayhem caused by 43 novice drivers circumnavigating a 2.9-mile road course in a fleet of $500 shi-boxes, we wisely elected Patrick, our least-experienced driver, to start the race for us.  Mark and I knew better than to have anything to do with the race start – throw the rookie into the deep end with a $500 life preserver!

When our rookie driver passed six cars (three wide!) in the first turn of the first lap, we thought we just may have a chance!  During Pat’s 105-minute stint behind the wheel he stayed clean, make a few nice passes, and succeeded in placing us in a solid 8th place at our first driver change.  Tom took over for his 105 minutes of fame and basically did the same thing – kept the car out of trouble, slowly chipped away at his lap times, and brought the car in firmly in 10th place.  Things were looking pretty good so far…

With the rookies out of the way, Mark and I were hoping to move the car up the leader board in the closing hours of the race.  I took the wheel at 12:30 pm and wasted no time *allegedly* making a pass during a yellow flag incident.  This would not have been the end of the world, but I then *allegedly* missed 5 laps of black flags from the race officials.  I’m not going to admit to guilt here, but I may have been slightly delayed in seeing them.  Just maybe.  Where’s my lawyer again?  The ensuing hand-slapping in the pits amounted to a 2-lap penalty, but we were sent right back out on track to make the time back up again.  Keeping my eyes peeled for any more flags (yellow, black, or otherwise), I brought the car in at the end of my stint having moved us up to 7th place overall. 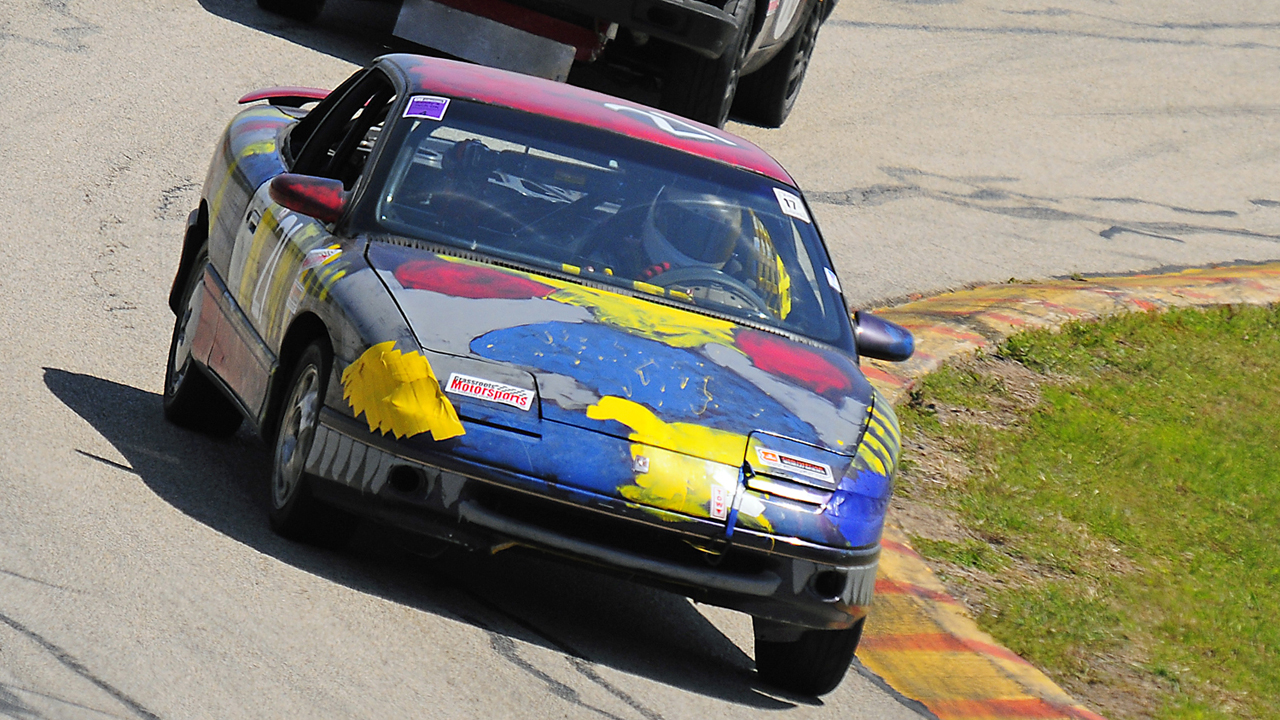 Mark hopped in the car and took OFF.  Playing the role of anchor, Mark leaned on the car and began to run consistent and fast.  That is, until the coolant level light began to flash with about 45 minutes left in the session!  After pulling off the course and making his way back to the pits, we popped the hood and found everything to be in order.  About 30 seconds after putting the car back into the race, I realized that this was the same errant coolant level diagnostic issue that burned us at IRP in the old Showroom Stock car back in 1997…but by that point the car was another 2 laps down and there was nothing we could do about it.

The happy ending is that after 7 hours of continuous thrashing Mark brought home the SC2 in…are you ready for this…5th place overall!  Some quick workbench math allowed us to rationalize that if we had not lost those 4 laps due to the *alleged* black flag incident and the coolant code incident we were a legitimate podium contender.  With this newfound sense of complete overconfidence, we changed the tires and rotors in anticipation of Sunday’s race.  I also took the liberty of drilling the air box full of holes on Saturday night in an attempt to uncork as much horsepower from this obvious power restriction as I could.

After again dining at Outback and visiting Dairy Queen, we decided that too much of a good thing still really isn’t all that bad.  Other post-race highlights included the Hello Kitty duct tape and epoxying the driver’s side mirror back together, but there simply is not time here for all of those small details…

On day two, we decided to send Tom out first to see if he could survive the raw carnage at the race start.  Turns out he was up to the task, driving every bit as consistently and cleanly as he had on Saturday.  As he drove in and handed off the car to Pat, we were running in 10th place.  Pat also pressed the repeat button and clicked off 105 minutes of uneventful laps, bringing the car up to 8th place.  Both drivers had noted that the car seemed considerably down on power as evidenced by the 10 mph reduction in top speed on the front straight.  Because the lap times were not that far off we didn’t make much of it as Mark saddled up for this stint.

In typical Mark fashion, he was fast and smooth.  He really is my hero.  105 minutes later he handed off the car to me, sitting neatly in 5th place on the leader board, but on the same lap as the cars in positions 3 and 4.  Clearly we had something good going on, and it was my job to try to move up those last few spots to the podium. 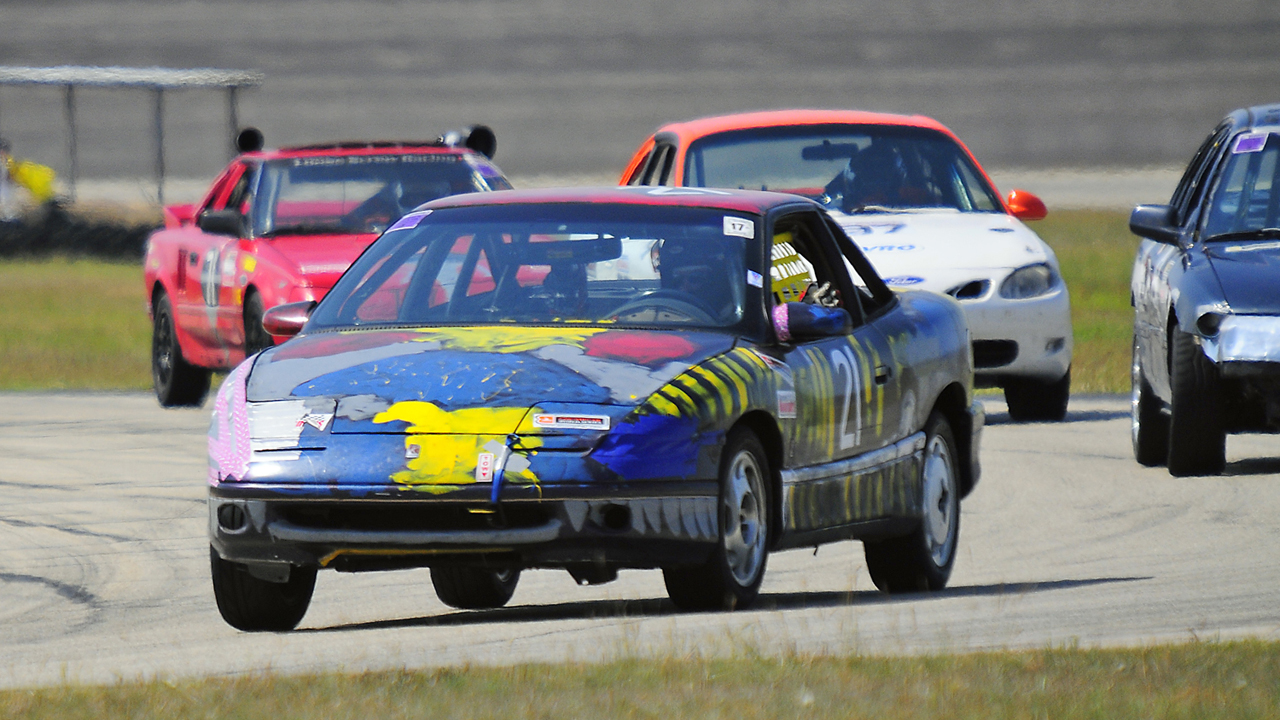 One hour into my stint, I was shown the “P03” sign from pit row.  Third place!  At that moment a podium finish looked like a sure thing, as the next closest competitor was more than 1 full lap behind us.  The happy ending started to fizzle, though, when the car completely ran out of gas 3 laps later.

Literally running out of gas on pit row was something I had never experienced before.  Thankfully the car was close enough that it could be pushed to our pit box while Tom frantically jumped into his fire-proof suit to fuel the car up.  In just a few short minutes, he threw in what little (emphasis on the word little there) remaining fuel we had to finish the race.  With only 20 minutes to go, we didn’t need much!

So, as it turned out, we had just enough gas to make it about, oh, 7 more minutes.  In that 7 minutes I managed to run our fastest lap of the race, but ironically it was in vain.  On the flip side, running out of gas twice in the same race is a rare feat, and now I can claim this as an on-track accomplishment.  Yet in spite of essentially being parked for 15 of the final 30 minutes of the race, we still managed to end up in 7th at the end of the day.  And while a podium finish would have been sweet, this makes for a much better story that we will certainly be telling for years and years.  I am pretty sure that Dana is already sick of hearing it. 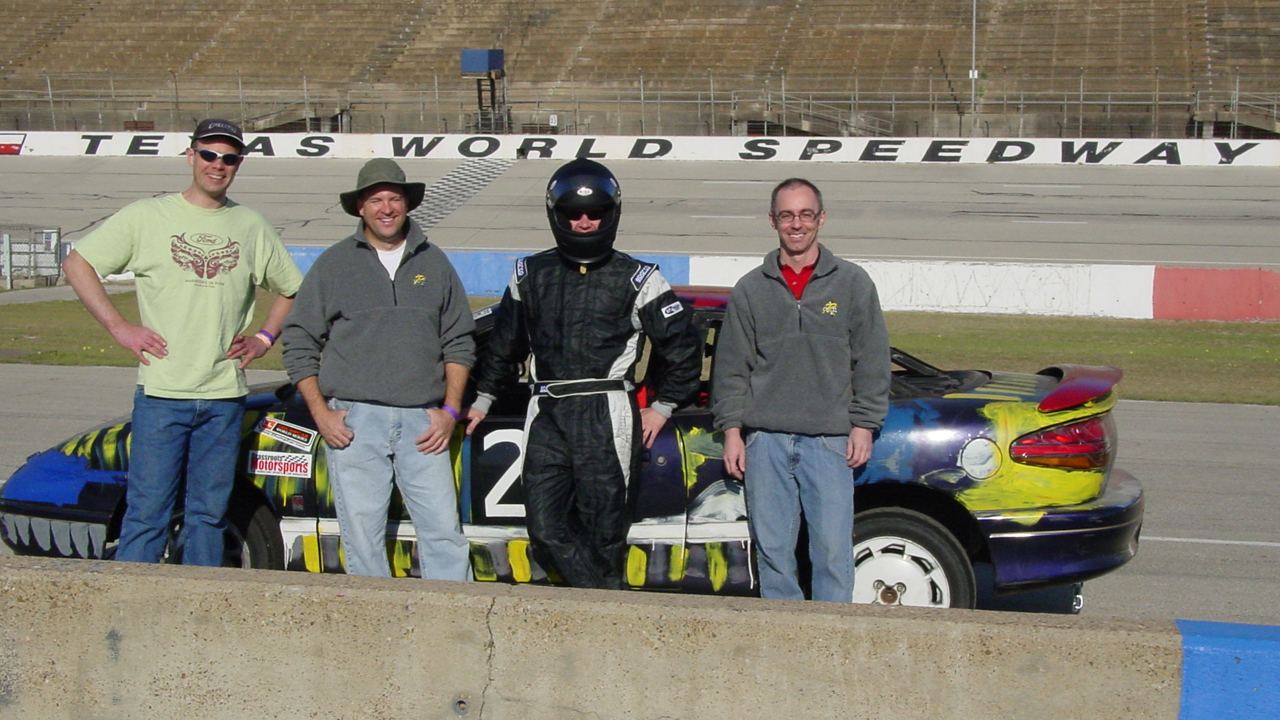 So there you have it.  A full 14 hours of racing (or 13.8, to be precise), no mechanical issues, two top-10 finishes, and enough stories and laughter to hold us over until our next race on July 9/10 at BeaveRun near Pittsburgh, PA.  My son Zack has already suggested – with a look of extreme concern that only a worried 8-year-old can muster – that we should bring another jug of gas with us next time.