Q: Stop that. You’re always so negative at the start of the season.

A: Can you blame me? I have watched this movie three times now and the ending remains the same. 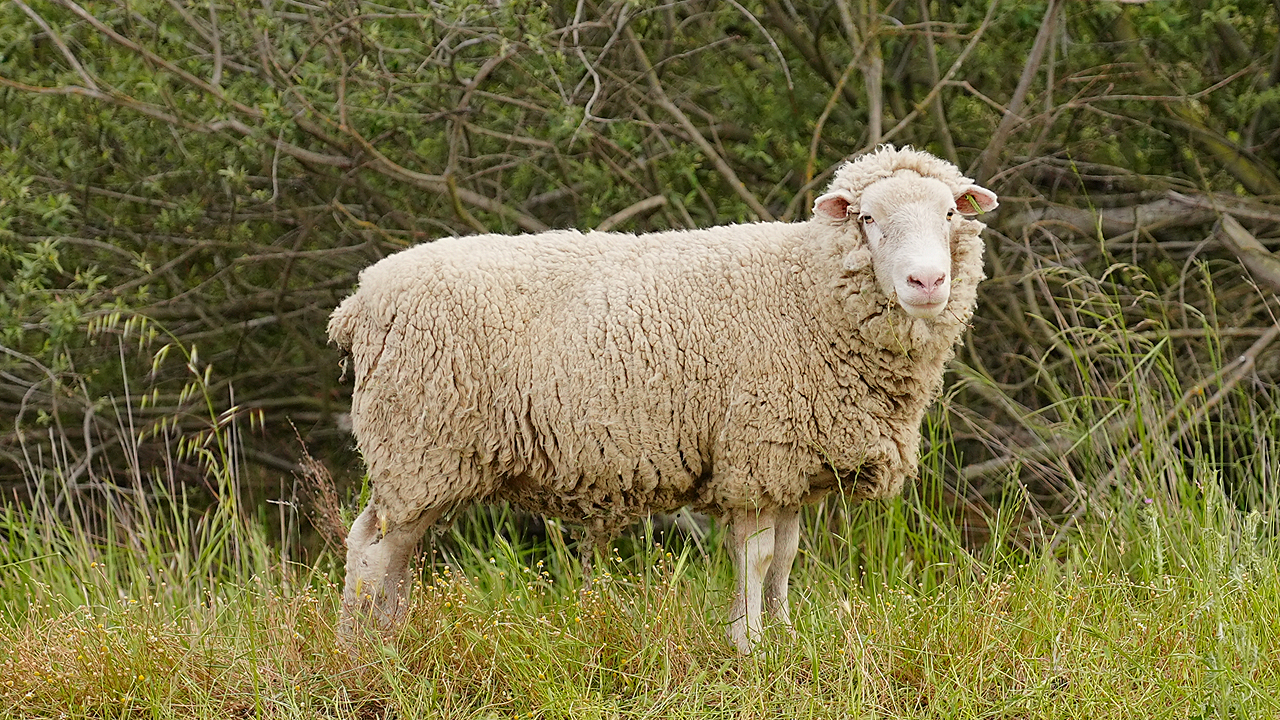 A: At Sonoma, that’s a lawnmower. 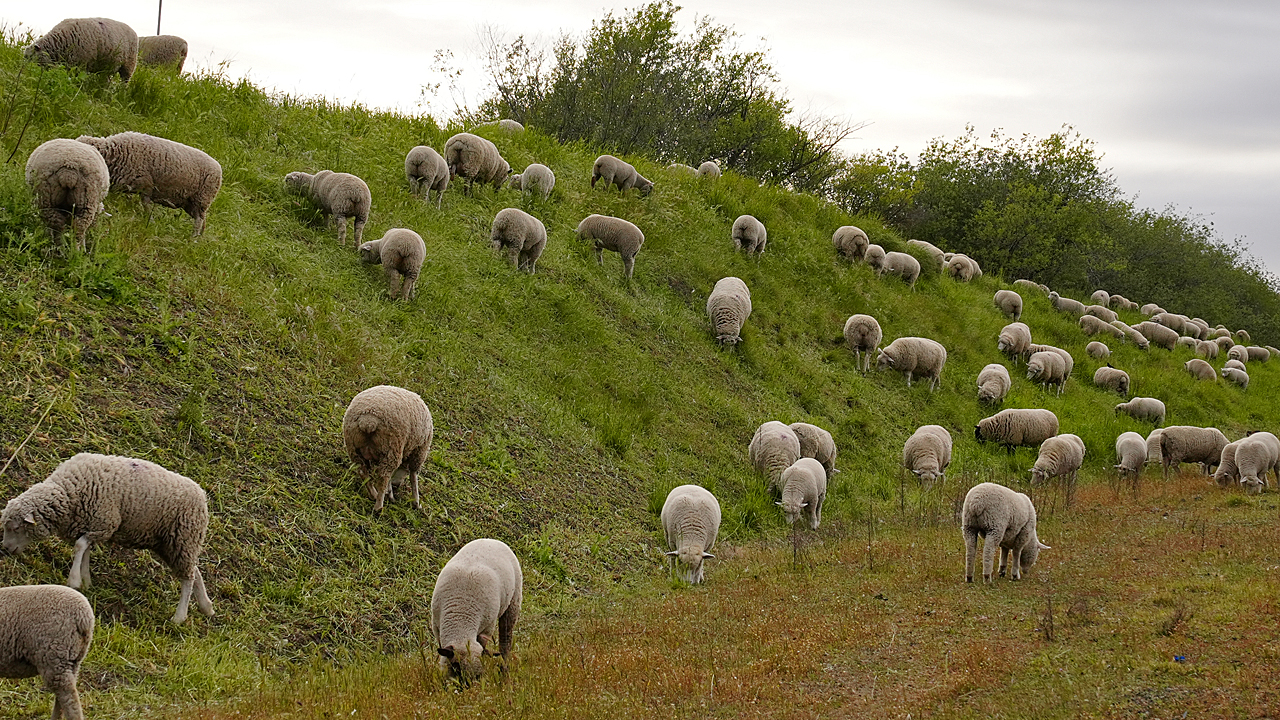 Q: I suppose you have more even more sheep photos, don’t you?

A: Of course. My daughter thinks they’re cute.

Q: I can’t believe I am suggesting this, but how about some Haiku therapy?

A: It’s worth a shot. Let’s see what happens next.

I hate Sonoma
No, I detest Sonoma
But sheep are dang cute

Q: Did that help?

A: Not even close.

Q: Then let’s not do that again.

A: Agreed. No more Haiku for the rest of the season. Maybe.

Q: Come on. Was it really that bad?

A: Of course not. We finished 10th and 9th in a Pro/Am field of something like 20 cars, but nobody gets all excited about that. At least, not me. However, I did get hit on Lap 1 on Saturday by an overzealous Aston Martin, and that gave us a chance to break out the Hello Kitty Duck Tape for the first time this season. 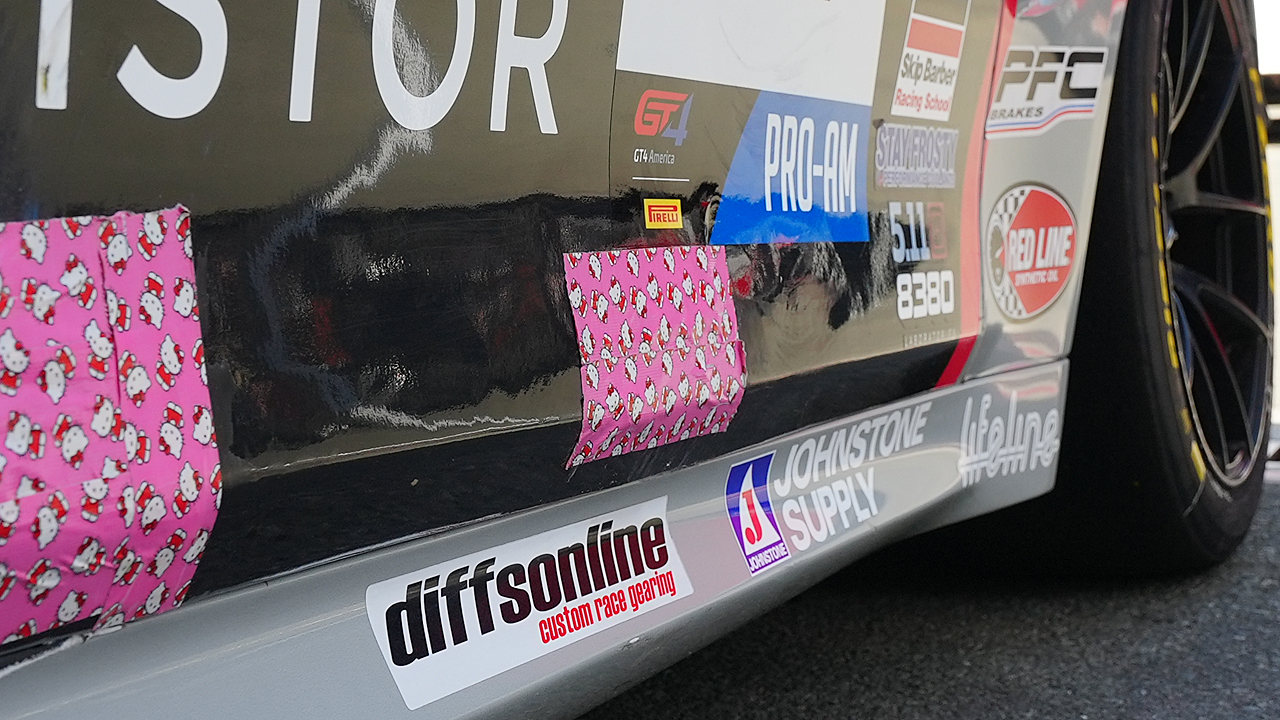 Hello Kitty to the rescue. But her magical powers were no match for Sonoma.

Q: I heard that this was the largest field ever in the history of GT4 SprintX. Is that true?

A: First of all, a memo from the department of corrections and clarifications: effective immediately, SRO has made obsolete the term “GT4 SprintX.” It has been replaced with “GT4 America.” Please don’t ask me why. But now I need to go and update the entire team website to 1) ensure compliance with these new branding initiatives and 2) to avoid the wrath of Greg Gil, Staci Langham, and all of the SRO marketing experts.

Q: Whatever. I heard that this was the largest field ever in the history of GT4 America. Is that true?

Q: Being that it was Sonoma, at least the weather was delightful?

A: Ha. No. Rain came and went all weekend long. While the two races were actually run under dry conditions, just about every other session was influenced by continually changing, and challenging, track conditions. 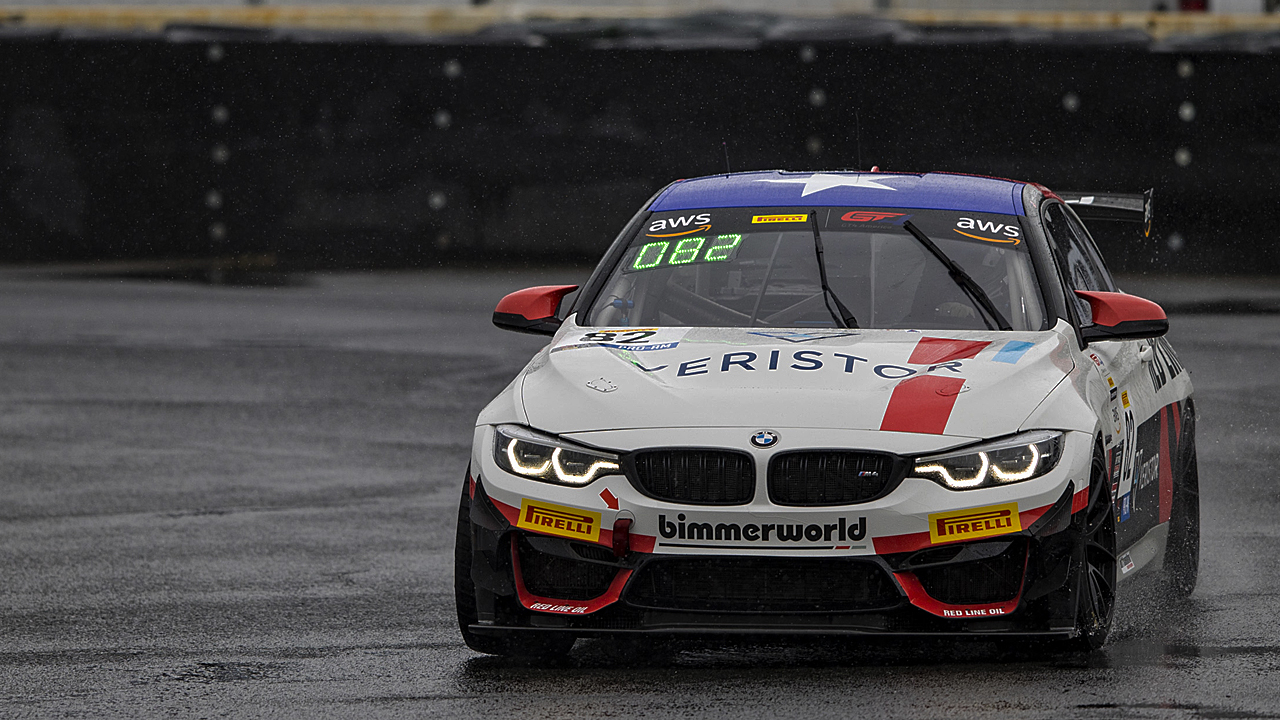 Rain at Sonoma. Who would have thought?

Q: Anything notable happen in practice?

A: Always. I somehow managed to spin less than 19 seconds into my first practice session on Friday morning. While driving uphill. This takes considerable talent, in case you are wondering. So I think that’s notable. 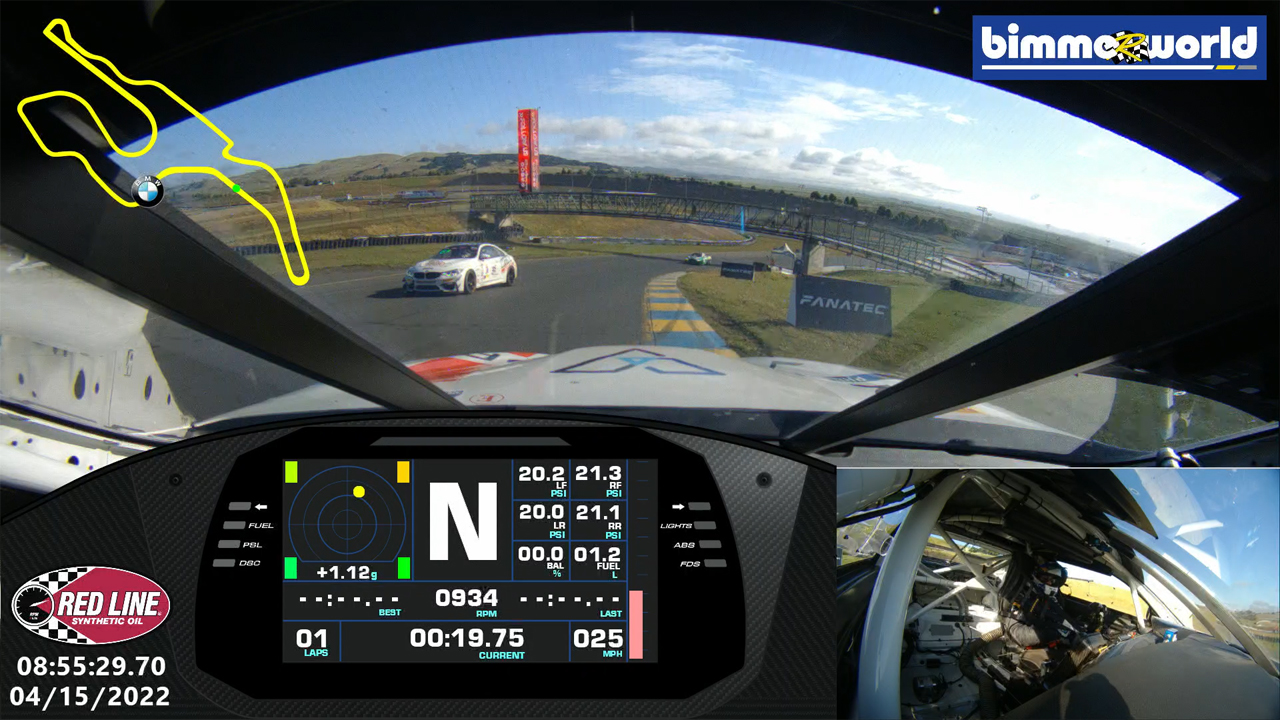 Cold tires. Cold track. Cold driver. Even so, I claim no responsibility.

Q: Did Devin have better luck?

A: Devin had never been to Sonoma, so he was simply trying to wrap his head around the place. It’s a track with a ton of nuance and switching from wet to dry and back again really made for a frustrating experience all around. But at least he kept the car pointed in the right direction all weekend (unlike his teammate).

Q: This sounds like pretty tough sledding so far.

A: Well, it wasn’t all bad news. On Friday afternoon the sun was shining, and I was the lucky one to go out on stickers. I proceeded to turn in a personal best lap time around the place, so apparently I learned something up to that point in the weekend. Unfortunately, there are no awards or trophies for this sort of thing, but it beat spinning around on the out lap. 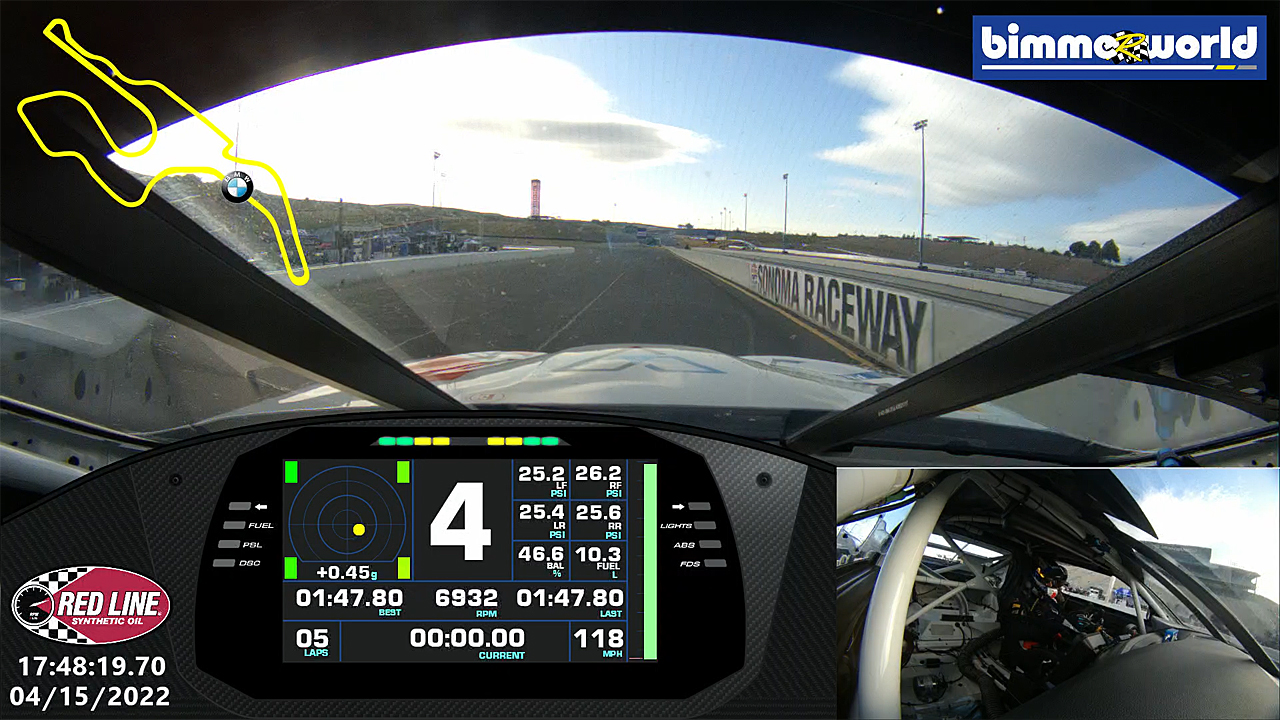 A new personal best. That was cool.

Q: Did you guys qualify in the wet or in the dry?

A: Yes. For my session, it was a drying track. But not exactly. Every lap was something new, and in a small weekend highlight, I managed to qualify for Saturday’s race 4th in class and 9th overall. That was actually something to write home about in such a large field, and for a fleeting moment put a little smile on my face.

When Devin qualified just 15 minutes later, the pavement was nearly dry. But not exactly. The conditions clearly favored those with prior experience at Sonoma, and with only a few laps under his belt at the track, Devin prudently drove on the side of caution. This resulted in us starting Sunday’s race 18th in class, 29th overall.

Q: So just give us the abbreviated version of Saturday’s race.

A: Train wreck. As we just discussed above, I started the race 4th in class and 9th overall. I was able to move into 8th overall almost immediately, but before the end of the first lap I was hit in the door and pushed off track in Turn 9 by the aforementioned overzealous Aston Martin, pinched against a concrete barrier by a Porsche, and was passed during a full course yellow by a Mustang. A complete variety pack of miscues, none of which were acknowledged by the folks in race control. This resulted in us falling back about four places or so and made me all kinds of grumpy. In fact, I’m still a little bit grumpy about it now. 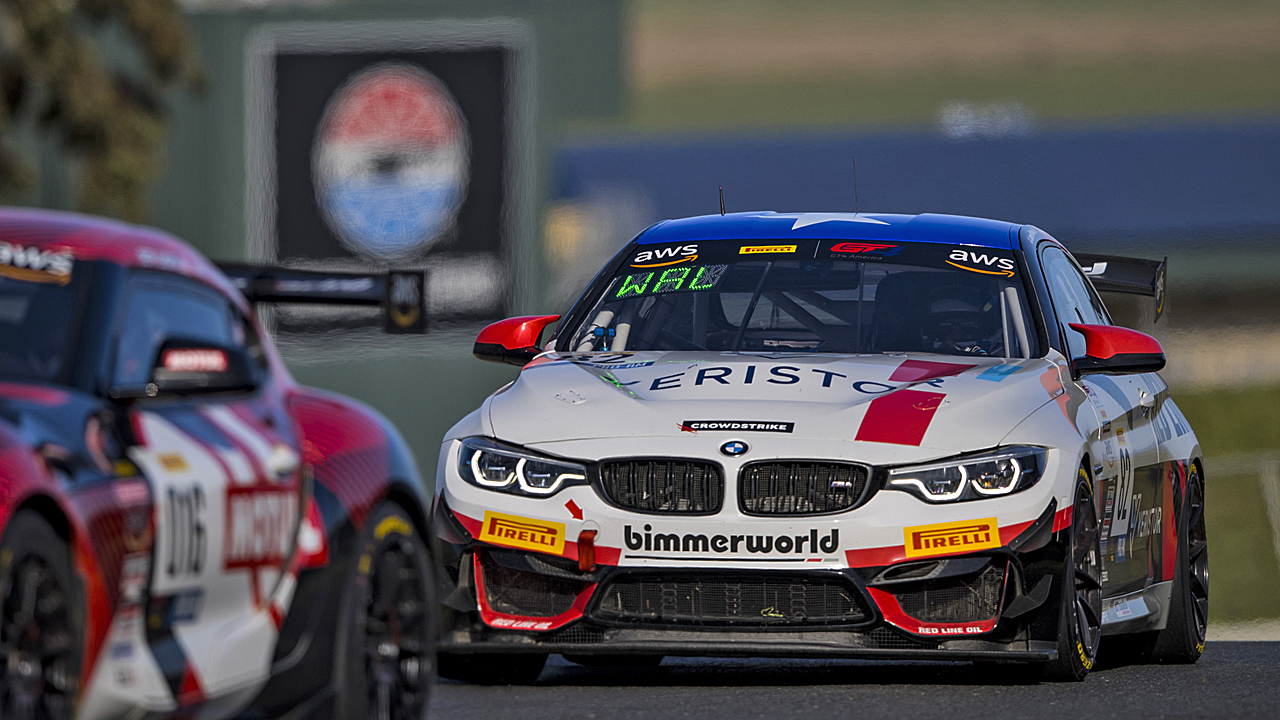 This is me temporarily happy with how the race is going.

Q: Did it get any better after the double yellow?

A: It didn’t get any better. The double yellows would not end, and during the final 28 minutes of my stint I enjoyed green flag racing for exactly one lap. How much am I paying for this again?

[That was rhetorical. Please don’t ask that question out loud. My wife is sitting in the other room and probably can hear us.]

Q: Was Devin able to improve on your efforts after the driver change?

A: Not really, but he held his ground. We nailed the pit lane time, so that was something to be happy about. But we ultimately finished the race 10th in class and 12th overall, leaving us hoping for better fortunes on Sunday. 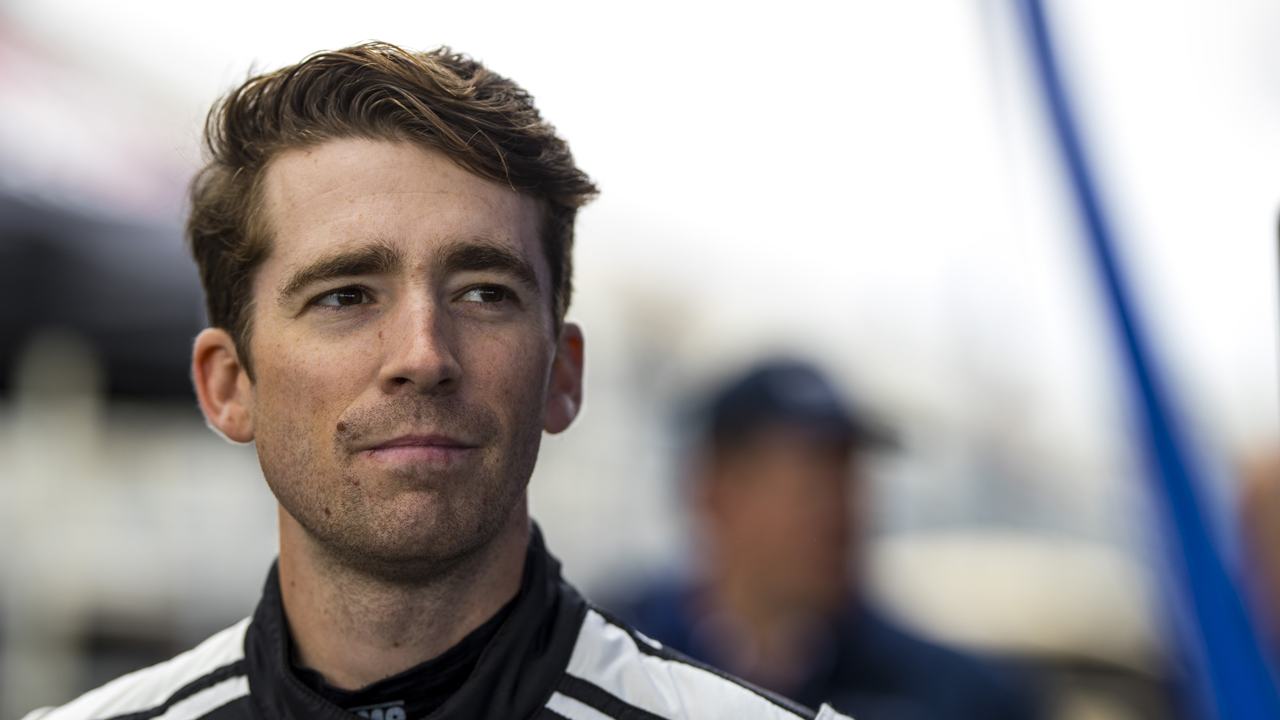 This is Devin hoping for better fortunes on Sunday.

Q: You didn’t have better fortunes on Sunday, did you?

A: Not by the conventional definition of the word “fortune,” no.

Q: How did Devin’s stint go?

A: Relatively uneventful. He started in 29th overall and managed to avoid bit of mayhem to advance up to 27th at the driver change. And although we nailed the pit lane time once again, when I got out on track to start my stint, we had effectively shuffled back to about 30th place overall.

Q: What place was that in class?

A: Don’t know. There were too many cars in front of us to count. Maybe 15th or so. But I simply put my head down and stayed out of trouble as we moved our way towards the front of the field. It wasn’t pretty, and none of it made the highlight reel, but by the time the checkered flag flew I had managed to move us up to 19th overall and 9th in class. 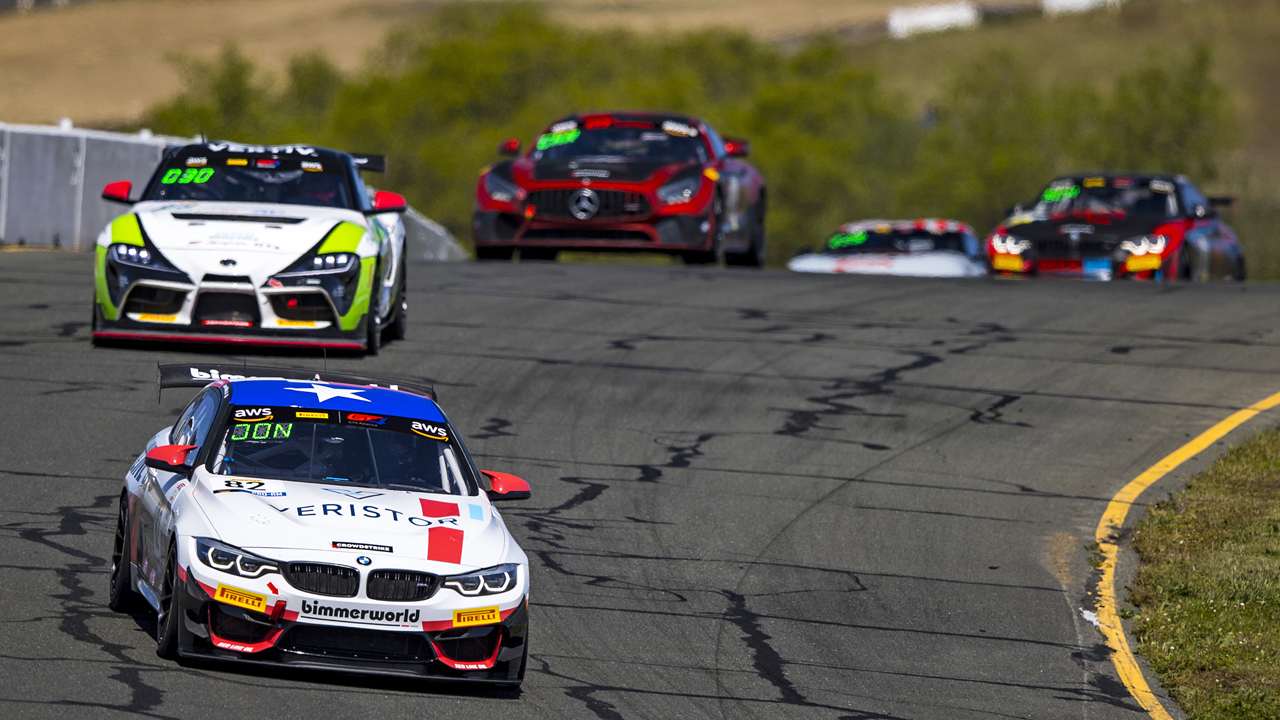 This is Devin still hoping for better fortunes on Sunday.

Q: You passed 11 cars during your stint and brought home some points? That doesn’t suck.

A: I suppose you’re right. But again, nobody gets all excited about that when you finish 9th in class. At least, not me.

And to be fair, on the last lap of the race, in an intense battle for 19th overall (said with my tongue clearly in my cheek), yet another overzealous Aston Martin (this one was WAY more overzealous than the one on Saturday) tried to pass me in Turn 9. When that went horribly wrong, he aborted to the grass and ended up creaming a poor little Porsche that was already in the corner in front of both of us just minding his own business.

Now, normally when you have a front-row seat to a yard sale like this, you instinctively think to yourself, “Cool! I just picked up another position!” Admittedly, you also feel a little bit selfish for benefiting from someone else’s gross misfortune, but I won’t lie – you get over that part pretty quickly.

So while I was there celebrating in my own helmet that I had narrowly avoided the last-lap carnage, the entire right-front wheel, tire, rotor, caliper, suspension upright, and coil-over shock from the Porsche flew six feet in the air and directly into the path of our poor little M4. Note that when this sort of thing occurs, you instinctively think to yourself, “Oh shoot!” Alternatively, you may actually say something out loud that is much more vulgar, which is essentially what I did. 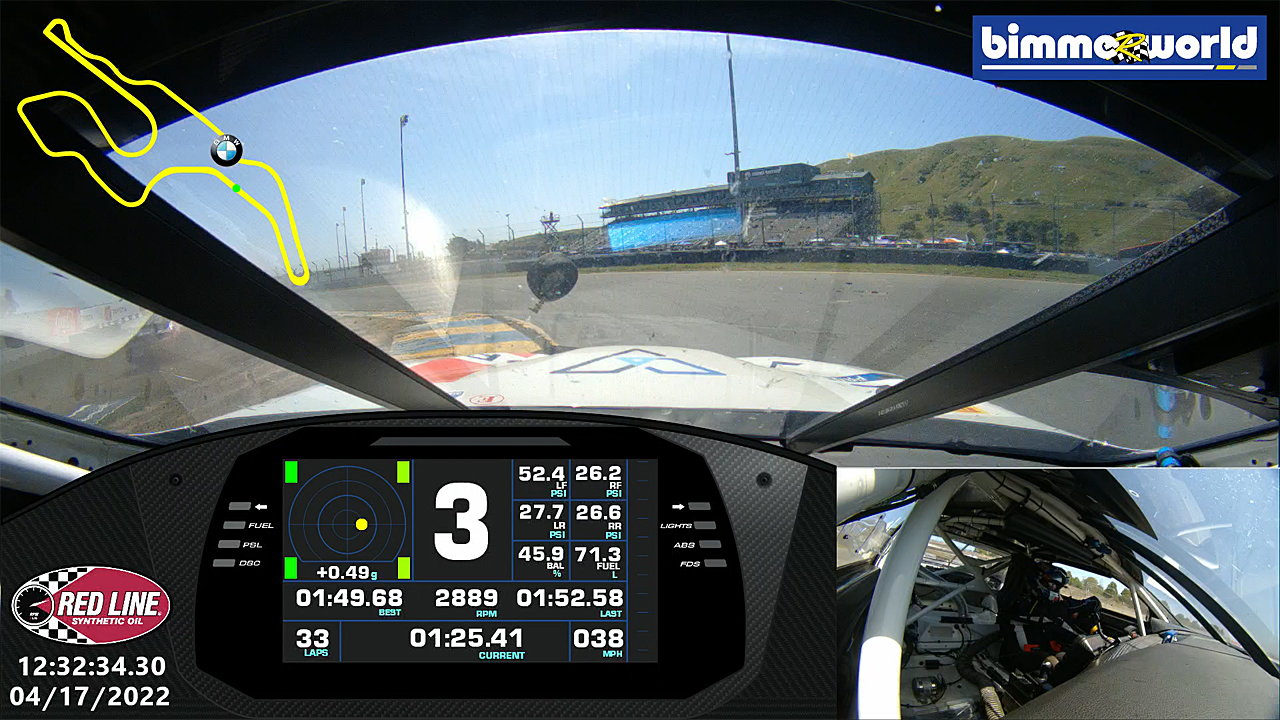 Avoiding this sort of thing is like trying to predict how a football is going to bounce.

Q: You must have missed it, because you already told us that you finished 9th in class on Sunday.

A: Yes, you’re right. But man, was it close. In full disclosure, I had braced for the impact that never materialized. And I guess you’re going to tell me that this is one more thing to be happy about, right?

Q: That’s clearly one more thing to be happy about.

A: Agreed. So maybe Sonoma didn’t suck after all? Is that where you are going with this? 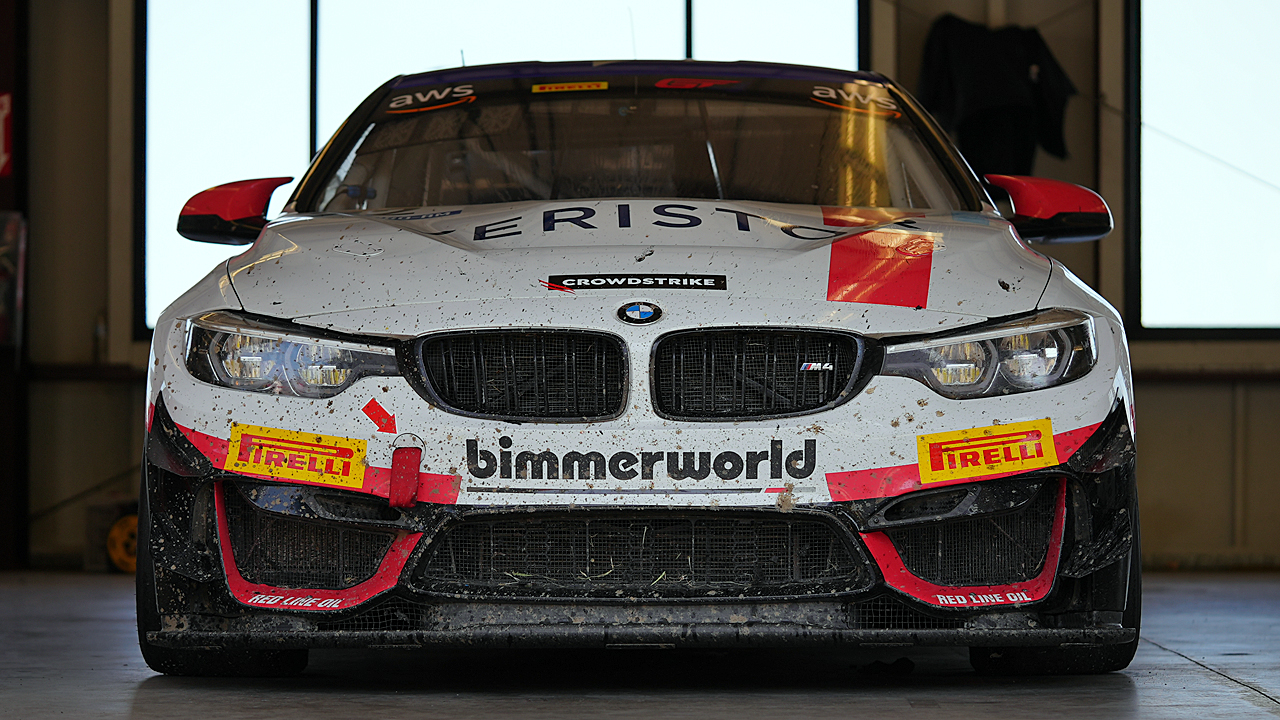 Dirty, but at least not damaged. Glass is half full.

Q: Now you’re getting with the program. So enough of this “Sonoma sucks” crap, ok?

A: Fine. I love Sonoma and can’t wait to go back. Honest.

Did that sound genuine? 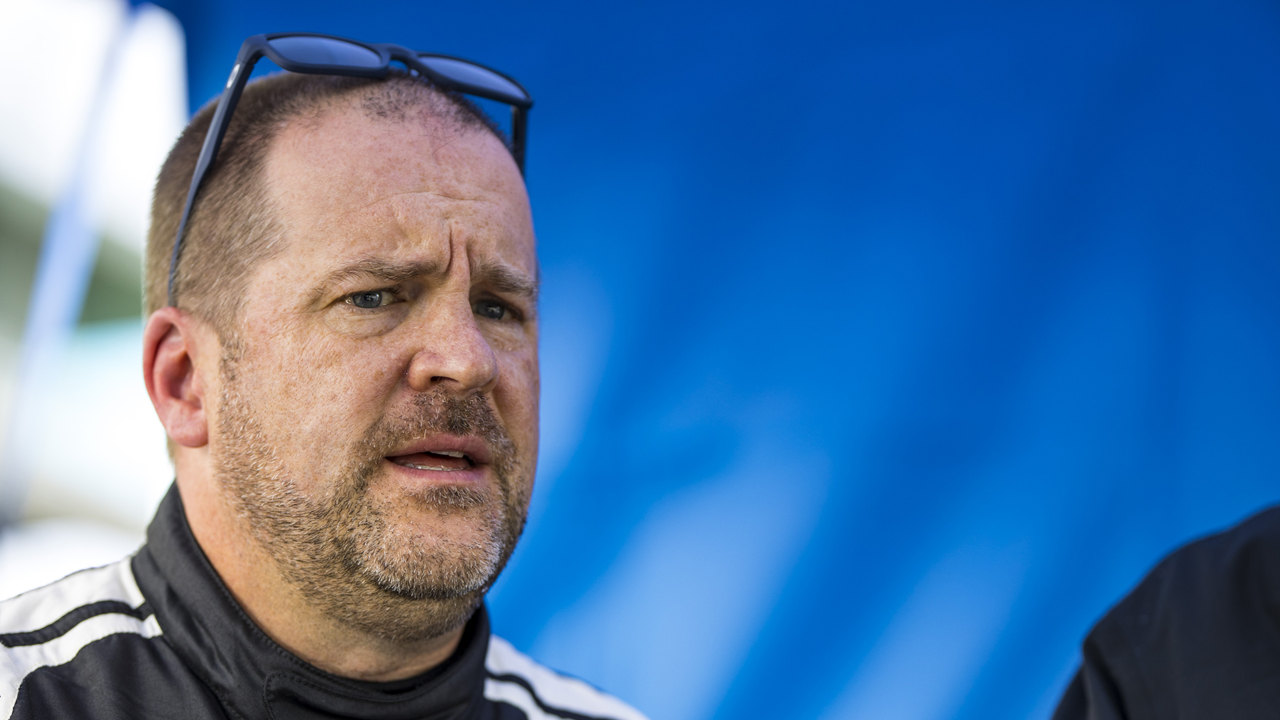 This is me, about to smile. Or sneeze. I can’t tell.

Q: That’s good enough. But what’s up with that facial hair?

A: I’m calling it “Speed Stubble” and if we don’t win soon, it’s gone. But feel free to weigh in on whether it 1) makes me look old or 2) provides me with a certain air of gravitas. You won’t hurt my feelings either way.

Q: Any other updates before you race at Ozarks this coming weekend?

A: Actually, glad you asked! Because of “supply chain” issues, the race at Ozarks International Raceway has been moved to NOLA Motorsports Park in New Orleans. Just south of New Orleans, actually.

Q: I thought the only thing south of New Orleans was the Gulf of Mexico?

A: Maybe that’s why the track is so flat? In any case, NOLA is where we are racing in five days. The full weekend schedule and the link to watch us qualify and race live online can both be found by surfing over to the GT4 America website. Just don’t go looking for a link on the GT4 SprintX website because, you know, that’s obsolete now…