Q: Are you ready to reveal your mystery co-driver yet?

A: Heck, yeah!  But can I first tell you about our test day at Road Atlanta last week?

A: In preparation for the 2020 GT4 SprintX season, the BimmerWorld crew rolled into Road Atlanta with a new car, a new driver, and nothing but rain in the forecast. 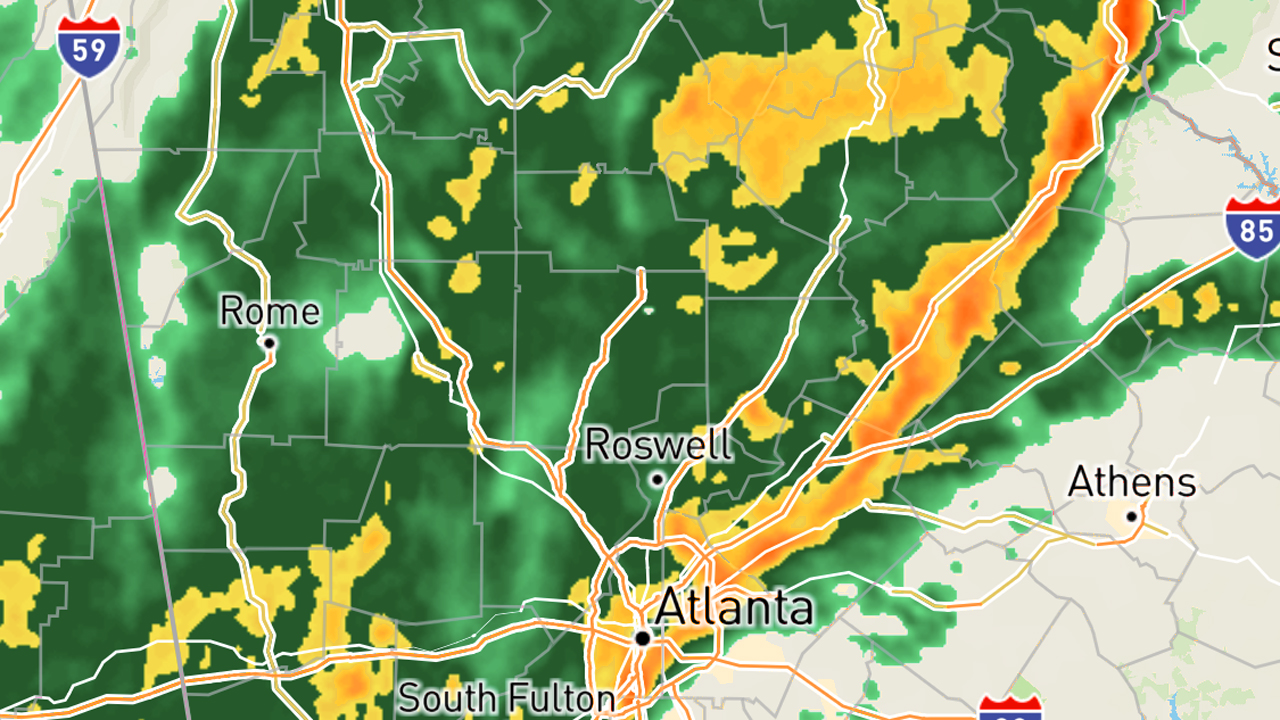 I hope somebody brought the rain tires.

Q: But you like Atlanta in the rain, right?

A: Sure!  If you recall, back in 2018 we nearly won Sunday’s Ferrari Challenge race in a complete downpour.  It was a fight every step of the way – we finished 0.2 second behind the race winner, lapped the entire field in less than 30 minutes, and set the fastest 458 race lap.

A: Good memory.  That was a Spec E30 weekend.  The car was owned by Robert Patton, a long-time friend and consummate racing dude.  While a brake hose failure in Turn 10a almost killed me – and his daughter at the same time! – it was my first taste of Munich’s finest at speed. 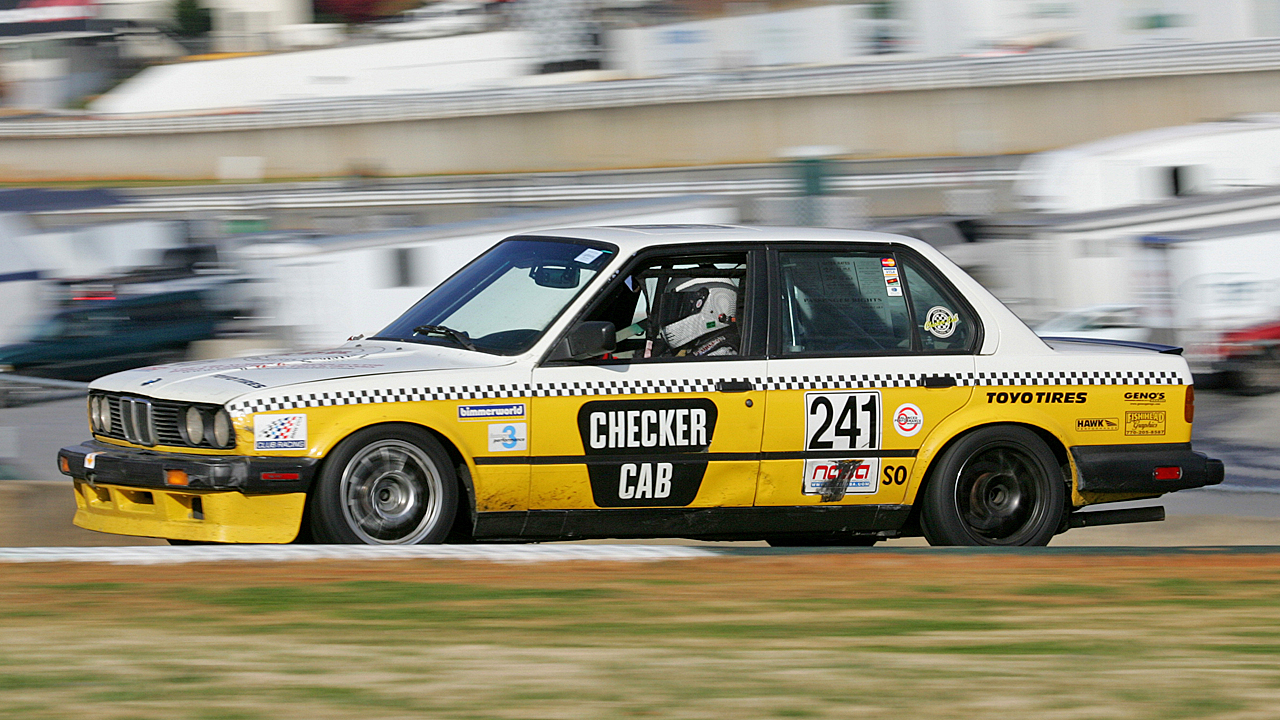 Road Atlanta, circa 2009.  Note the BimmerWorld decal on the front fender.  Who knew this was foreshadowing?

A: Don’t know.  We decided to leave it on the trailer until the sun came out later that afternoon.  The car was only delivered to the BimmerWorld Racing shop the week before, and there wasn’t much sense in getting it full of Georgia red clay on its maiden voyage. 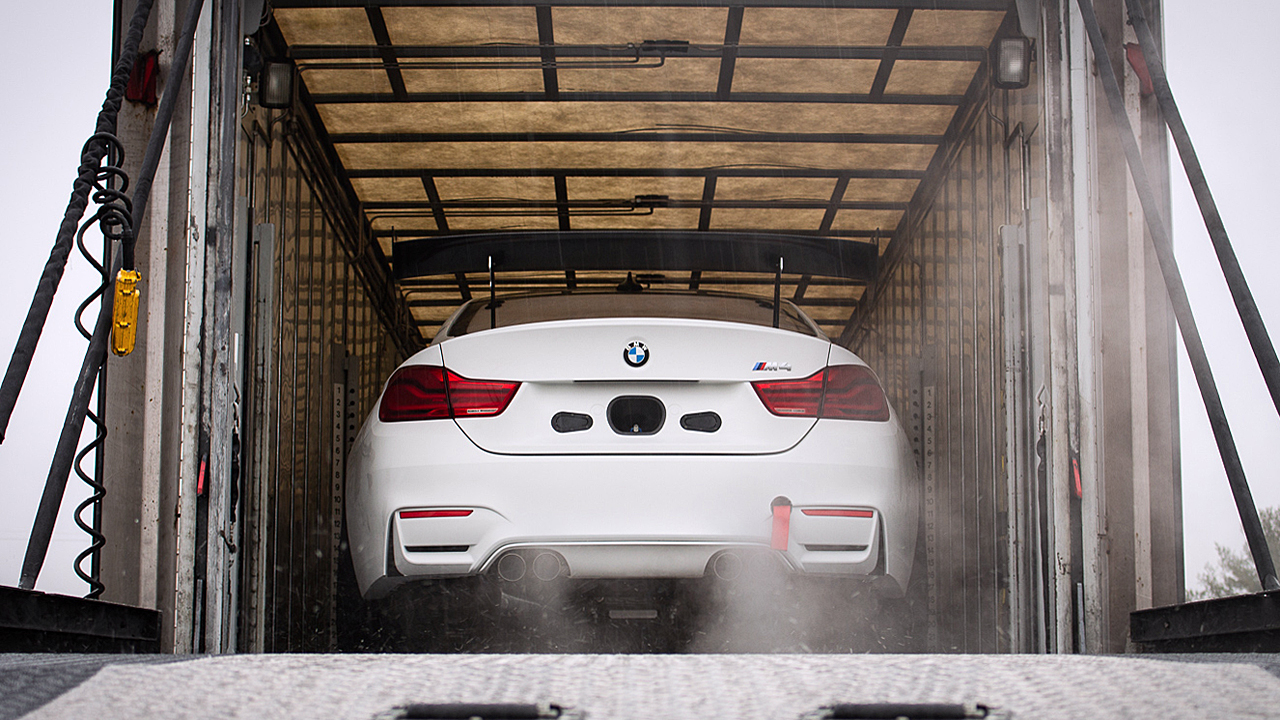 Idling while waiting for the rain to stop.  Very impatiently.

Q: So the day didn’t start out quite like you had hoped.  Did the weather eventually clear up?

A: It did.  After fighting off some new-car gremlins, I was finally able to get back behind the wheel of a proper race car.  It had been over six months since I had been at speed, but thankfully the pressure to perform was pretty modest.  The goal was to shake the car down, learn the operation of all of the primary controls, get the seat and harness fitted properly, and not ball it up coming out of Turn 12.

Q: Please tell me you didn’t ball it up coming out of Turn 12.

A: Nope, no worries.  Never put a tire wrong all afternoon.  The car rolled out of the paddock for a total of five sessions on track, each one lasting about six or seven laps.  Session one took place on used up rain tires just to get a feel for the seating position.  In spite of the semi-dry track conditions, session two took place on used up Michelin race tires just to get a feel for the steering, chassis, and brakes.  For sessions three and four, the track was essentially dry, so we bolted on new Pirelli race tires.  And then during session five as I was finally getting comfortable with the pace, the car unceremoniously ran out of gas. 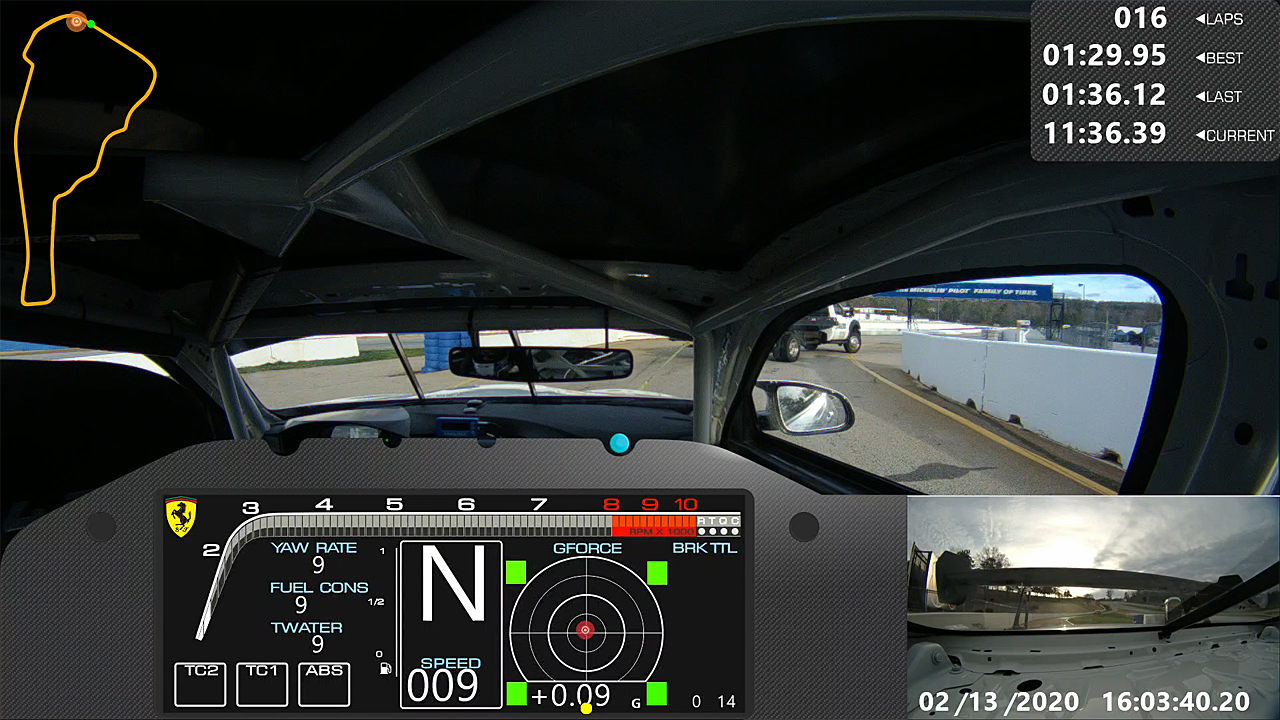 Yes, behind a wrecker once again.  Ignore the non-functional Ferrari dashboard graphics – we’re working on that.  Old habits die hard.

Q: Seriously?  That’s a theme with you, isn’t it?  First event of the year ends with a trip off of the track behind a wrecker?

A: You have been reading back issues of the scR motorsports newsletters, haven’t you?  In 2017, our brand-new 458 had an electrical fault during its first session at Laguna Seca.  Dead on track.  In 2018, the same 458 suffered a catastrophic transmission failure on its very first lap at COTA.  Dead on track.  And then last year, the little TCR Alfa needed the help of a wrecker to paddle its way out of the swamp at MSR Houston.

Q: How did you manage to run out of gas?

A: I’m going with the tried-and-true, “It wasn’t my fault.”  The car doesn’t have a gas gage, and through a combination of factors too boring to share here, there wasn’t enough gas in the tank to make it home.  But if that was to be the worst thing to happen all day, so be it.

Q: Was that the worst thing to happen all day?

A: Actually, no.  As a result of being pulled off of the track, I was 30 minutes late leaving for the airport.  Which meant I was 30 minutes late getting to the airport.  Which also meant that I left my sunglasses in the rental car, never to be seen again.  Which also meant I missed my flight by four minutes.  But if that was to be the worst thing to happen all day, so be it.

Q: What’s that sound?  It kind of sounds like a……leak.

A: Well, that’s exactly what it is!  Teenager here. I figured I probably couldn’t write an entire follow-up to this latest email, so I just took over this section of the newsletter.  My dad approves.

First of all, why is the new race car idling in the trailer?  That’s unsafe.  I never let my car idle in the garage, regardless of whether the door is open or not.

Also, did I see a mention of Gremlins earlier?  That’s what kind of racing series we’re in?  I thought we’d moved beyond ChumpCar-style racing by now.

A: I agree.  Go back and read my last follow-up newsletter and you’ll see how I alluded to it.  Now that’s all I have for you.  See you at the track!  With Bill Auberlen!  And free pork rinds, hopefully!

The M4 GT4 is much more of a production-based racecar than either the 458 or the TCR Alfa.  Which has its pros and cons.  On the plus side, it’s super-easy to drive, the fit-and-finish is spectacular, the air conditioning actually works, and it uses a tried-and-true engine and transmission.  Everything is sensibly laid out, the dash electronics are nicely integrated, and the power delivery is completely linear.

As you might expect from BMW, it is a perfectly refined racecar.

Q: And what’s wrong with any of that?

A: Nothing, of course.  But being perfectly refined means that it doesn’t jerk your neck on upshifts, doesn’t belch flames on downshifts, the clutch isn’t at all grumpy, and the transmission doesn’t whine louder than the exhaust – just some of the more redeeming qualities of the TCR Alfa.  In fact, the M4 GT4’s exhaust is quiet enough that I was frequently forgetting to upshift, and had to rely exclusively on the dash indicator lights to pull the upshift paddle on time. 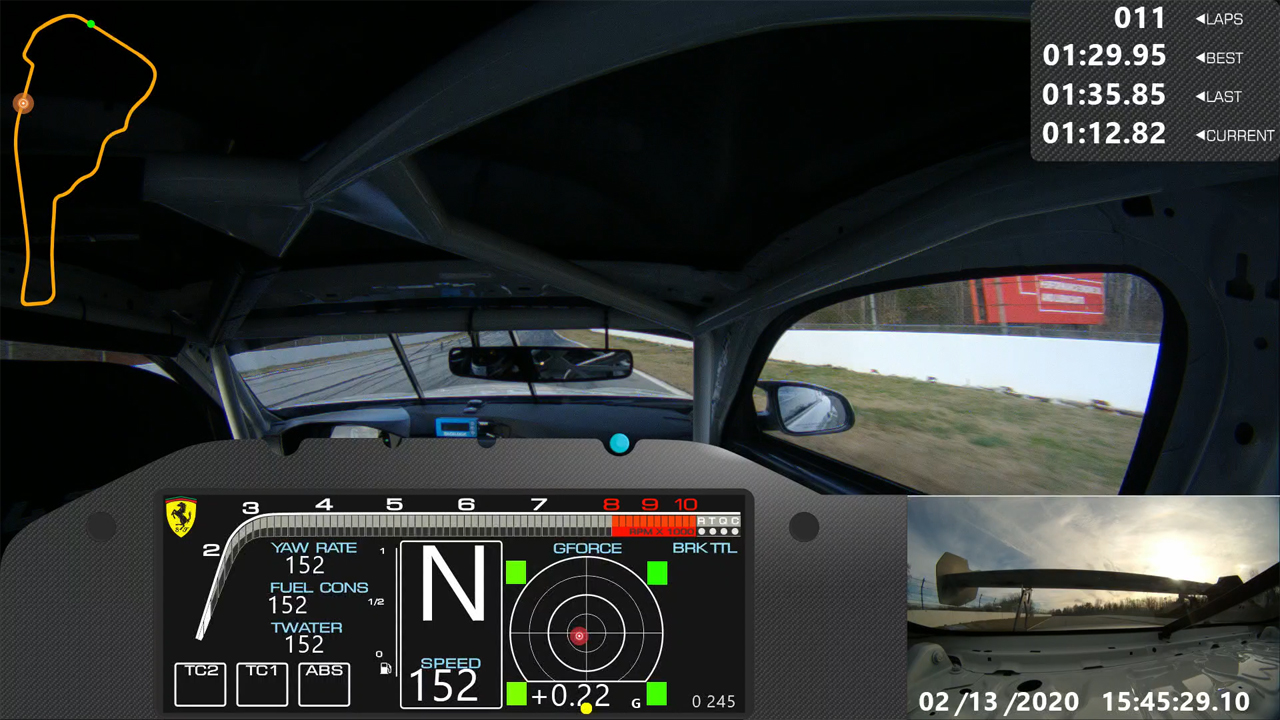 Cruising at 152 MPH with the air conditioning on high.  Am I getting too soft for this?

Q: None of that matters to the stopwatch, of course.  Is it fast?

A: Absolutely.  Lap times suggest it’s not quite as quick as the 458, but it is substantially faster than the TCR Alfa.

Q: So when is your first race again?

A: The first race of the 2020 SRO GT4 SprintX season will be held on March 7 and 8 in Austin, Texas at the incredible Circuit of the Americas.  Tickets are available online now, and we hope to see you there.  This track has always been good to us, and we expect that the BimmerWorld #82 M4 GT4 will continue that tradition.

A: Sore subject.  Ask me over a beer sometime.  And not some cheap beer.

Q: Pretend there is a beer in your hand now.  What the heck happened?

Q: No, it’s one of those fancy craft IPAs you like.

A: Ok then.  Details are murky, but apparently after receiving written confirmation from SRO that we had secured #34, they…waited six weeks to change their mind.  Which is nearly enough motivation for me to switch to IMSA for the rest of the season.  Not cool.

A: BimmerWorld has historically run #82 on their competition cars, so we’re going to adopt the team theme and run with it.  82 is the new 34.  And it’s going to be awesome.

Q: So, getting back to the original question: who is the mystery co-driver?

A: I’m sure the teenager has leaked it by now.  But in case you missed it, click on this link for the fancy-pants official team press release.