Has it really been four months since we were playing bumper cars at Homestead?  Man, do I hate the off season.

Risi Competizione / scR motorsports kicked off the 2018 season together this past week with a two-day test session at the Circuit of the Americas (COTA) in Austin, Texas.  Now technically the Risi guys kicked off their GTLM season with the 24 Hours of Daytona last month, but who’s counting?  This was the first time in almost 120 days #234 had turned a wheel at speed, and with all of the body work restored to like-new-again condition, we knew at the very least we would be the best-looking car in the garage. 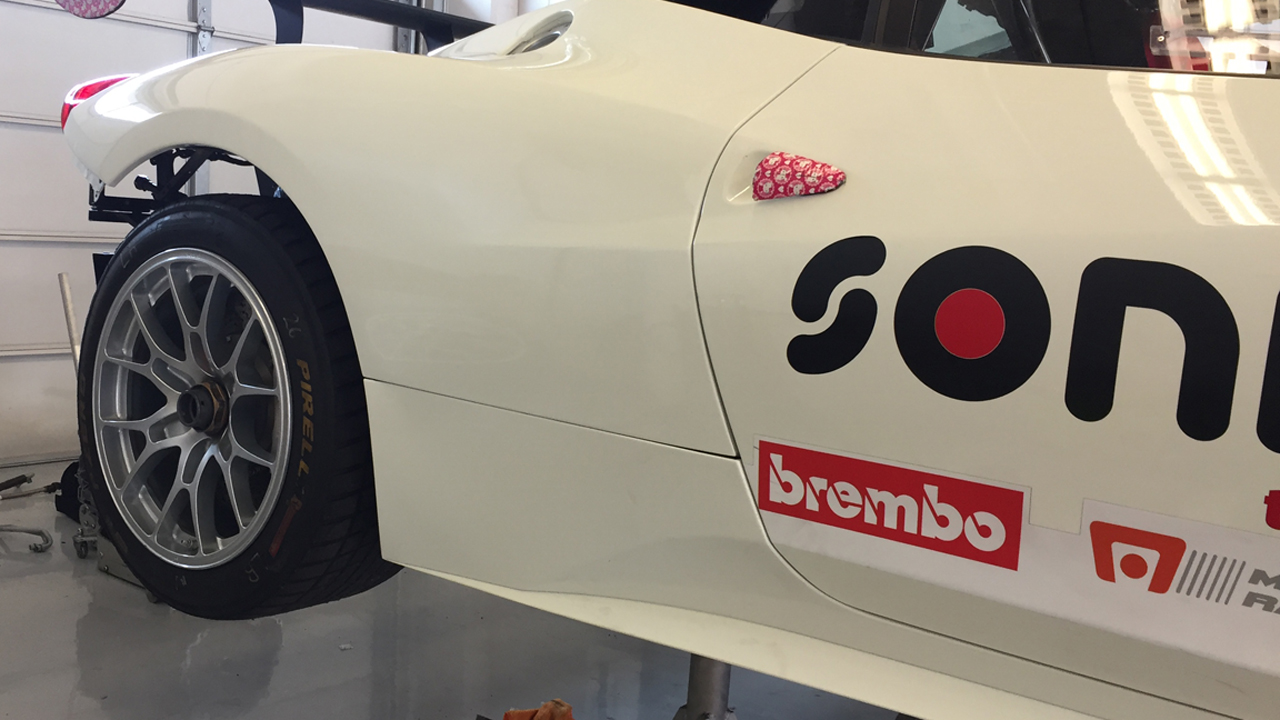 Back from the Risi body shop, like 2017 never happened…

So why spend time and money on a test day, you ask?  Great question.  Instead of showing up at the first race with a stale race car, rusty driver, and untested hardware, it’s always a great idea to shake the car (and driver) down to make sure that critical components are in perfect working order.  Components like, well, say, the, um…transmission.  I’m just spit balling here. 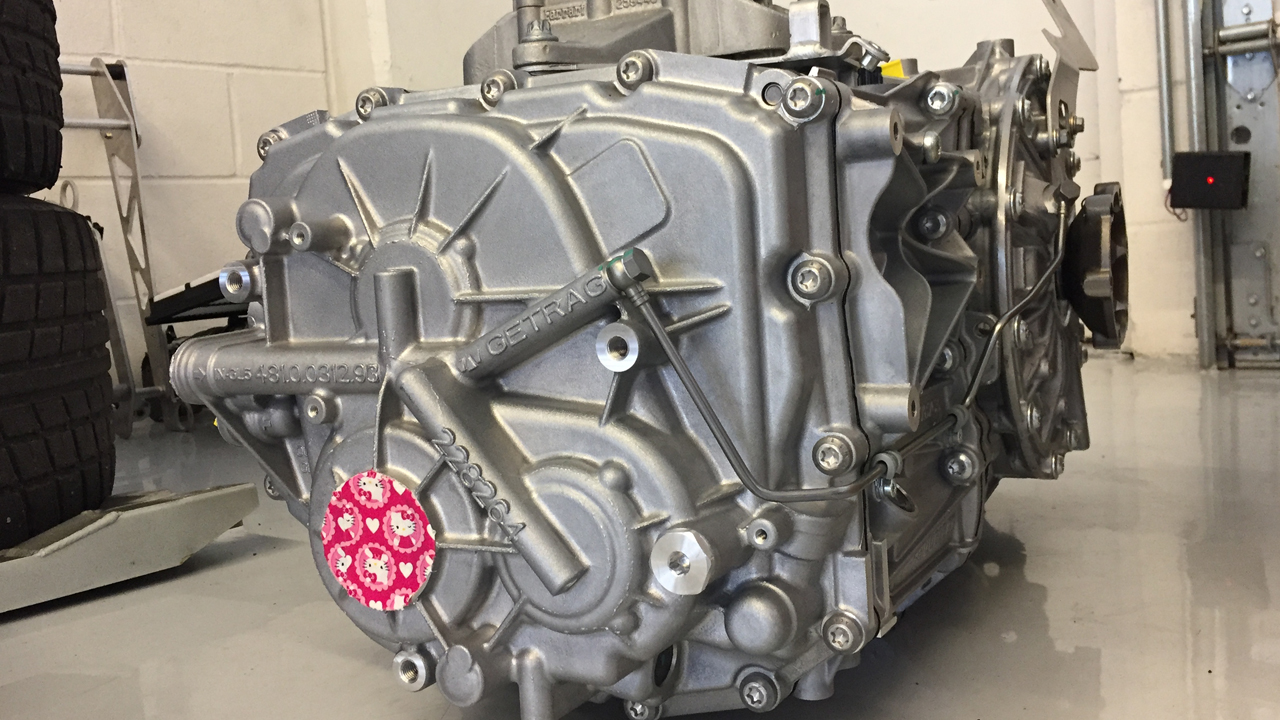 Yes, that is a 458 transmission…now with Hello Kitty duct tape.

Speaking of transmissions, ours lasted approximately 0.6 laps before catastrophically failing.  And no, McVea, it wasn’t the ring and pinion gear (sorry, inside joke).  While the autopsy results are still pending, the primary symptom of the transmission failure was that it failed to transmit.  Anything.  Which is basically its job.  And now your racecar is a sitting duck at the track out point of Turn 12.

Be nervous, my friends.  Be very nervous. 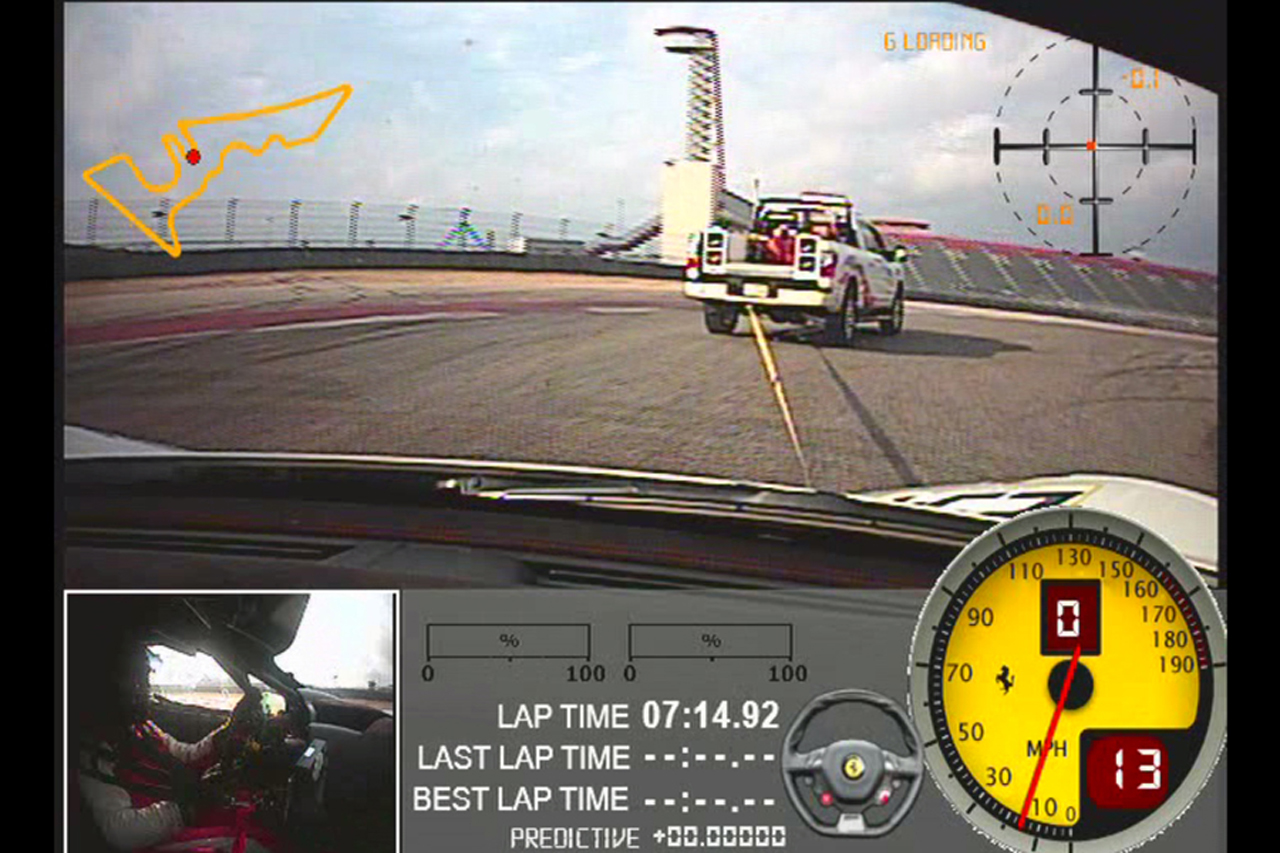 After the tour of shame behind the tow vehicle, the Risi crew got straight to work.  Sonic Tools in hand, the car was fitted with a new transmission and three new transmission coolers in just under six hours.  Not surprisingly, my wallet was fitted with a battered credit card in the same timeframe, but that’s racing (I continue to say that, but it still doesn’t help). 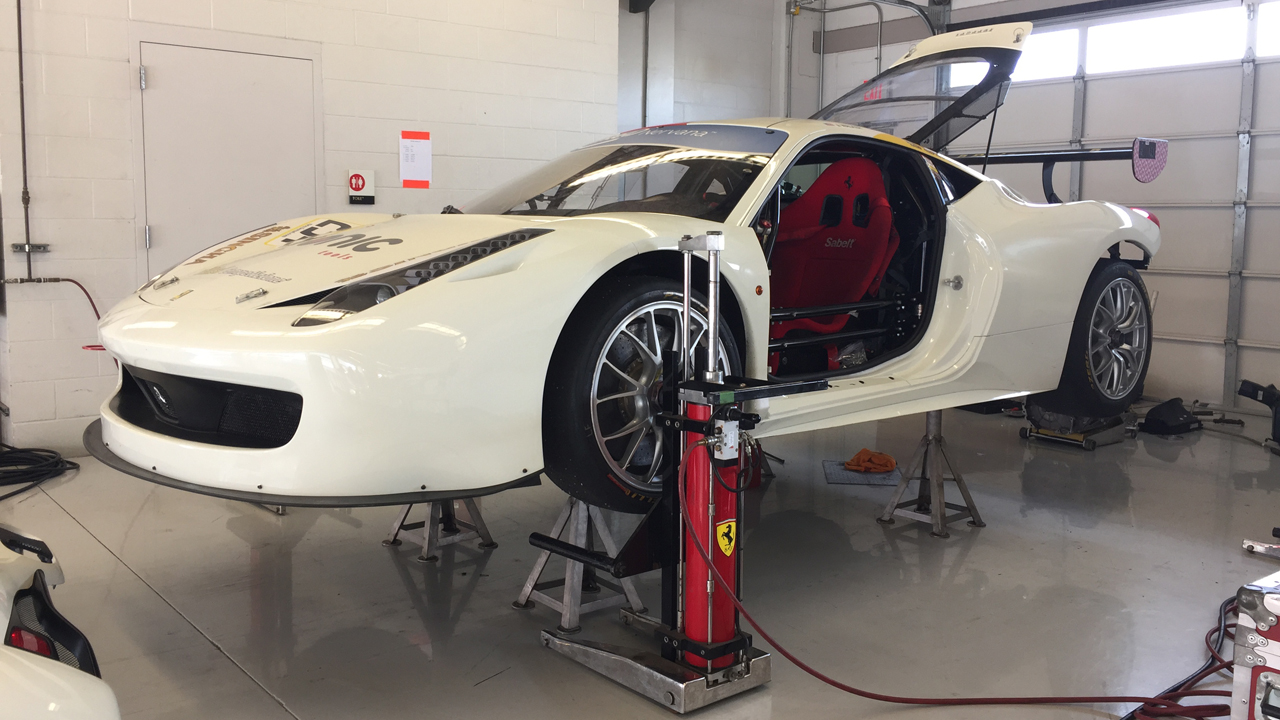 Shot taken during transplant surgery.  Yes, you should be jealous of the jacks. 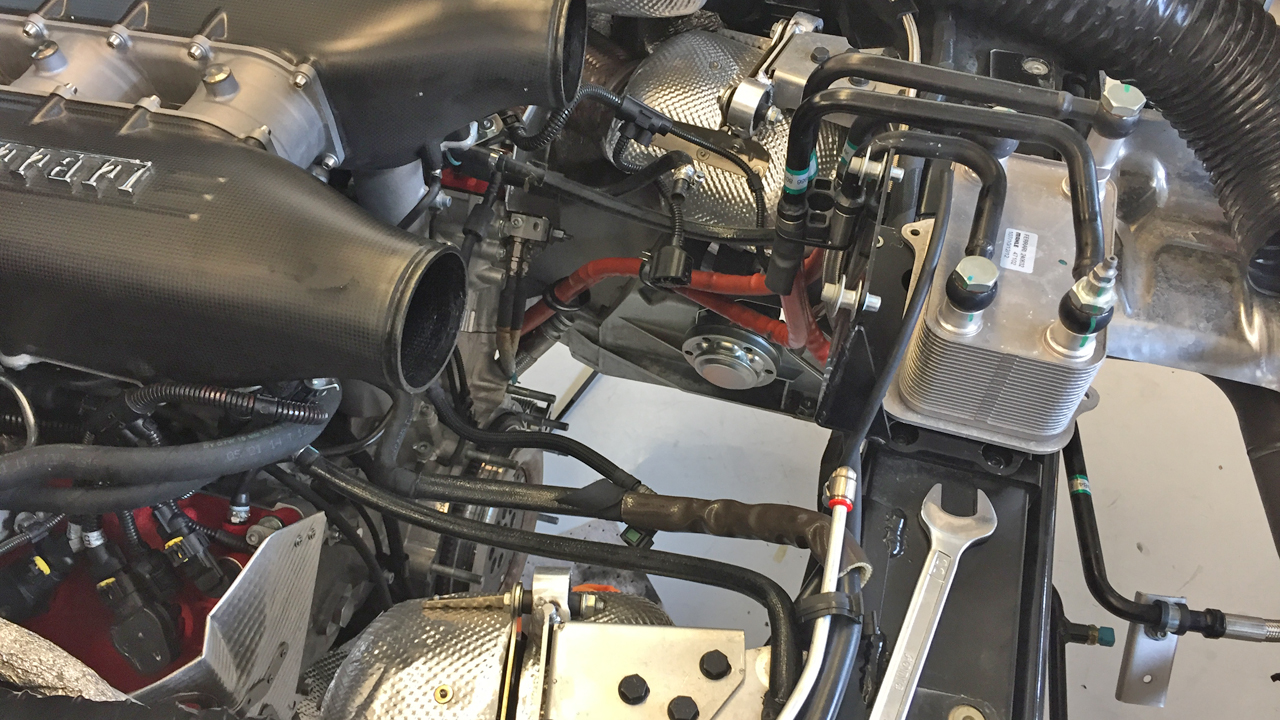 Thanks to the hard work of the Risi crew, the car was finally ready to go again at 5:00 P.M.  Since there were only about 30 minutes of track time left, the focus was on simply 1) completing a lap, 2) checking all of the critical components, and 3) laying down a fast time or two.  The fairy-tale ending would have been that in spite of missing the entire day with our transmission out of the car, we would skip the pleasantries and immediately set the fastest race lap of the day for the entire class.

Which is exactly what happened.

Kind of nice when a plan comes together like that.  With #234 at the top of the day-one leaderboard, we headed into downtown Austin, consumed far too much BBQ, and recharged the batteries for day two.

While the rain threatened all morning long, it thankfully passed right on by.  Our two-hour-long session started with older tires, some lead-follow exercises with a potential new team member in a 458 of his own, and a couple of red flags being thrown for folks without enough traction and/or talent.  Then, with about 20 minutes to go, Rick called up a set of stickers (that means “brand-new tires” for those not learned in such terminology) for a qualifying drill. 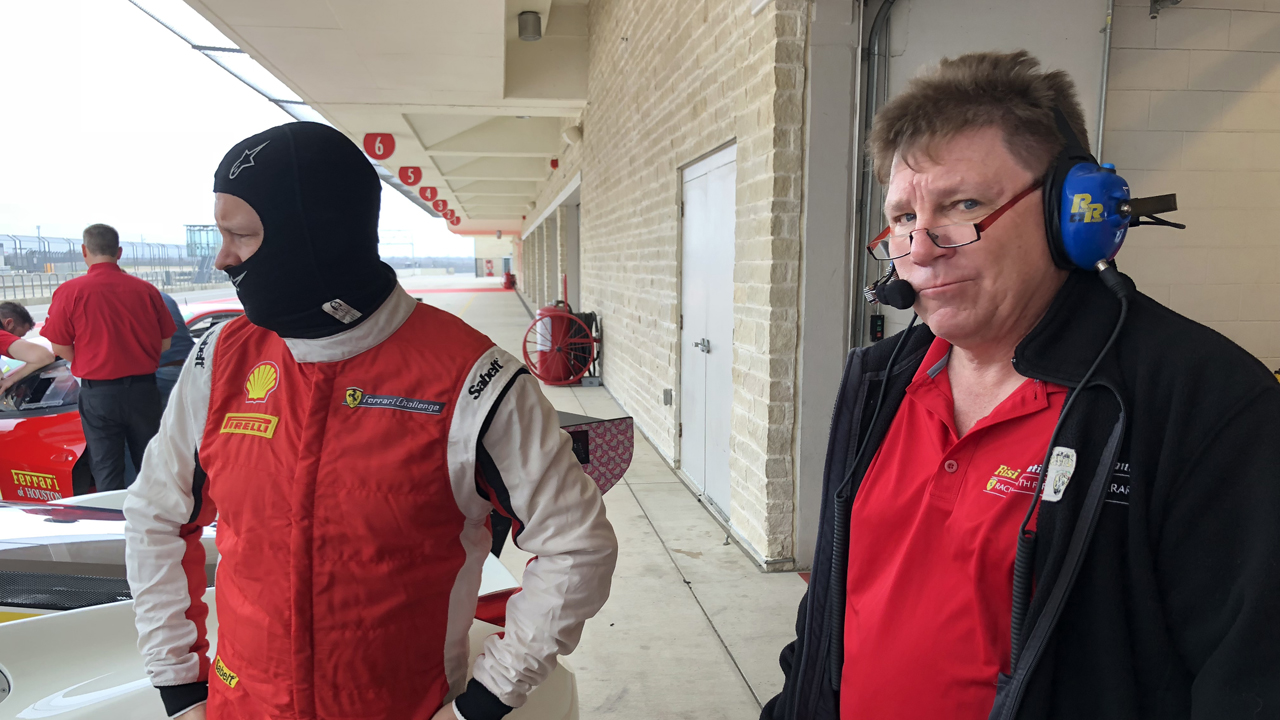 Rick apparently does not approve of the small fish on my headsock.

Once the tires were up to temp and the traffic subsided, we put down our fastest laps of the event.  Our last was our best – a 2:16.3 – and was only 0.09 seconds slower than our fastest 458 competitor.  A small issue involving not-quite-enough-fuel-in-the-car led to an early end to our session, but in the end it was a success, transmission drama excepted.

There were clearly 2:15’s (or faster) in the car, but shortly after our morning session the rain showed up.  In earnest.  The crew put the car in the hauler and we made our way back to Houston.  Guess we will have to save those lap times for next month.

Ladies and gentlemen, start your engines!

Ok, that’s a tired lead-in line, but it’s late and I can’t think of anything more creative.  Sorry about that.

Our first race of the season will be the weekend of March 10th and 11th right back at COTA.  Yes, that’s two weeks from now.  If you’re local, please come out and share part or all of the weekend with us.  In case you don’t recall, we won this race last year, and as defending champions we are eager to make sure the trophy stays here in town for another 12 months.  The schedule of events is not completely finalized, but certainly will look something like this:

In semi-typical Ferrari Challenge fashion, I can’t find a link to event information or tickets, but am 99.9% sure that if you show up at the front gate you can buy tickets at the door for a small fee.  If you DO plan to join us at the track, please reply and let me know so that we can pass along more information and the weekend schedule once (if?) it becomes available.  The large turnout we had last year was simply amazing, and we really hope that you find the time to share in the fun this time around as well.  Racing in front of the home crowd is always a very special affair! 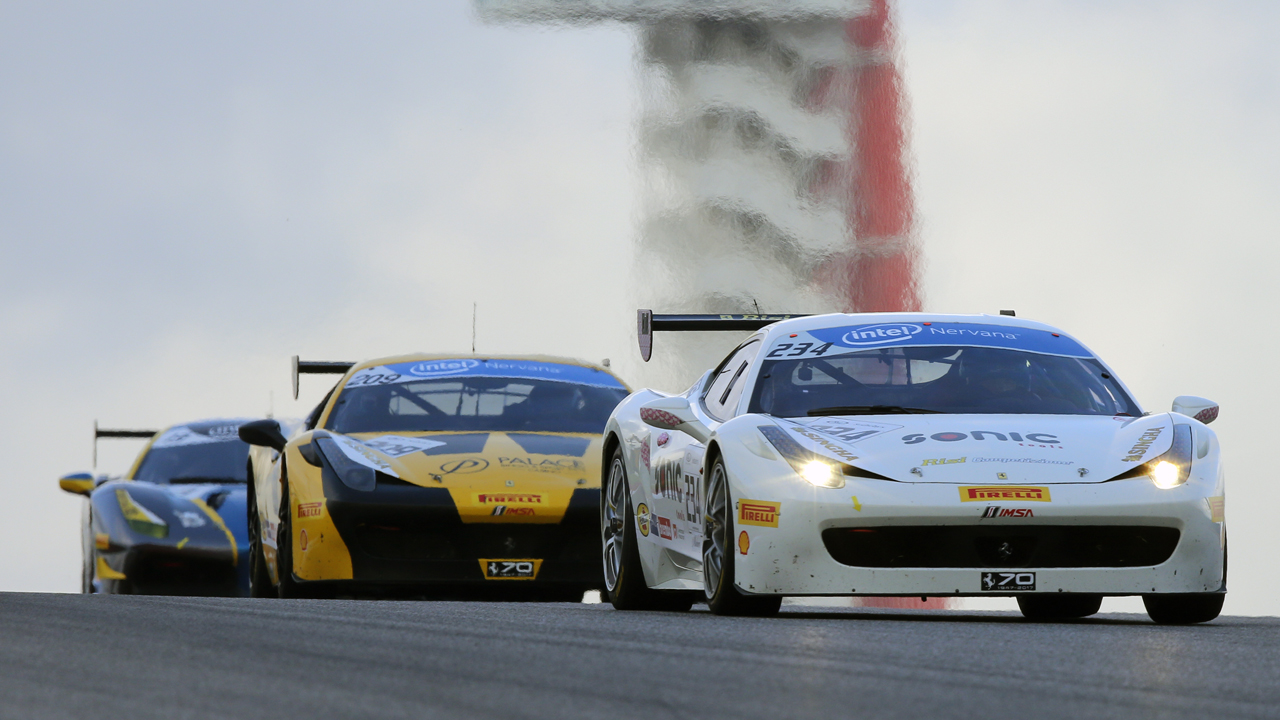 From the archive: great COTA 2017 action shot by Scott Foley.

As an added bonus, rumor has it that Ferrari will be bringing out a bunch of historic racecars to this event, and you might even get a chance to see an F1 car or two running around the paddock.  I doubt any of them will be sporting Hello Kitty, though…