In a weekend filled with AWOL alternators, booming exhaust systems, errant shift cables, failed wheel bearings, and melted fuel pump harnesses, the scR motorsports camp kicked off our first full race weekend of the year by taking Grattan Raceway by storm.  Bring on the mechanical gremlins – we can fix anything!

Since Mark Rushbrook in the #21 car and John Comeskey in the #55 car had already competed at Gingerman earlier in the year, only James Walker, Jr. in the #34 car made the Friday morning trek across the state of Michigan to shake out the off-season bugs.  He was closely followed by Jan Rief in his ITA Integra GS <cough, cough>, also hoping to get in a few laps of Grattan before his inaugural race at the track.  The sun was shining, the grass was green, and the Hoosiers were ready to roll. 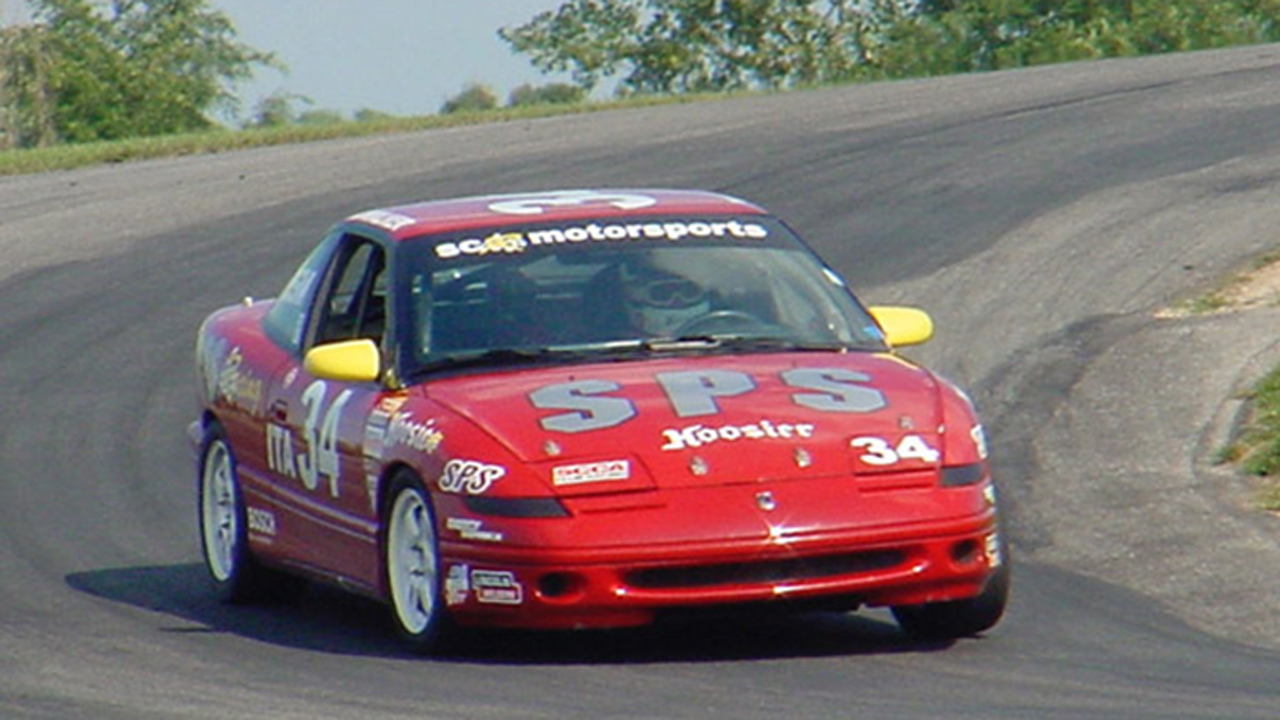 Roll they did until practice session #2 when the oh-so-cool new-for-2002 carbon fiber dash indicated to James that the battery voltage was somewhere below nine volts.  Thinking back to Watkins Glen, 2002, the team quickly concluded that the alternator charging wire had gone south.  No problem, easy swap.

Unfortunately, inspection of the wire showed that it was fine, so the team made the next logical jump – the alternator must be bad.  As Murphy’s law would have it, replacing the alternator (not the most friendly job on a Saturn in the middle of a big, grassy field) made no improvement, so the engineers broke out the wiring schematics and very slowly came to the answer…the oh-so-cool new-for-2002 carbon fiber dash apparently bypassed the stock battery indicator light which – for reasons we still do not understand – is an integral part of the Saturn charging system.

The long, drawn-out solution would have been to procure another indicator light, splice it into the oh-so-cool new-for-2002 carbon fiber dash wiring, and hope for the best.  The team instead bought two more batteries at K-Mart and charged them overnight in the Hampton Inn hotel room, hoping each would last for the following day’s races.

Qualifying on Saturday morning would be a record-setting event (for people who care to keep track of such records).  For the first time ever, no less than FOUR Saturn coupes took the green flag for an SCCA-sanctioned road race – the three cars in the scR motorsports camp and the ‘Trans Am blue’ (we still say it looks blue-green) coupe of Chris Berube.  Because the #34 had missed nearly all of practice on Friday most of the session was spent getting a feel for the car, but the car was quick nonetheless.  Fifteen minutes with the eyes glued to the voltmeter were rewarded when the final grid for the race was posted. 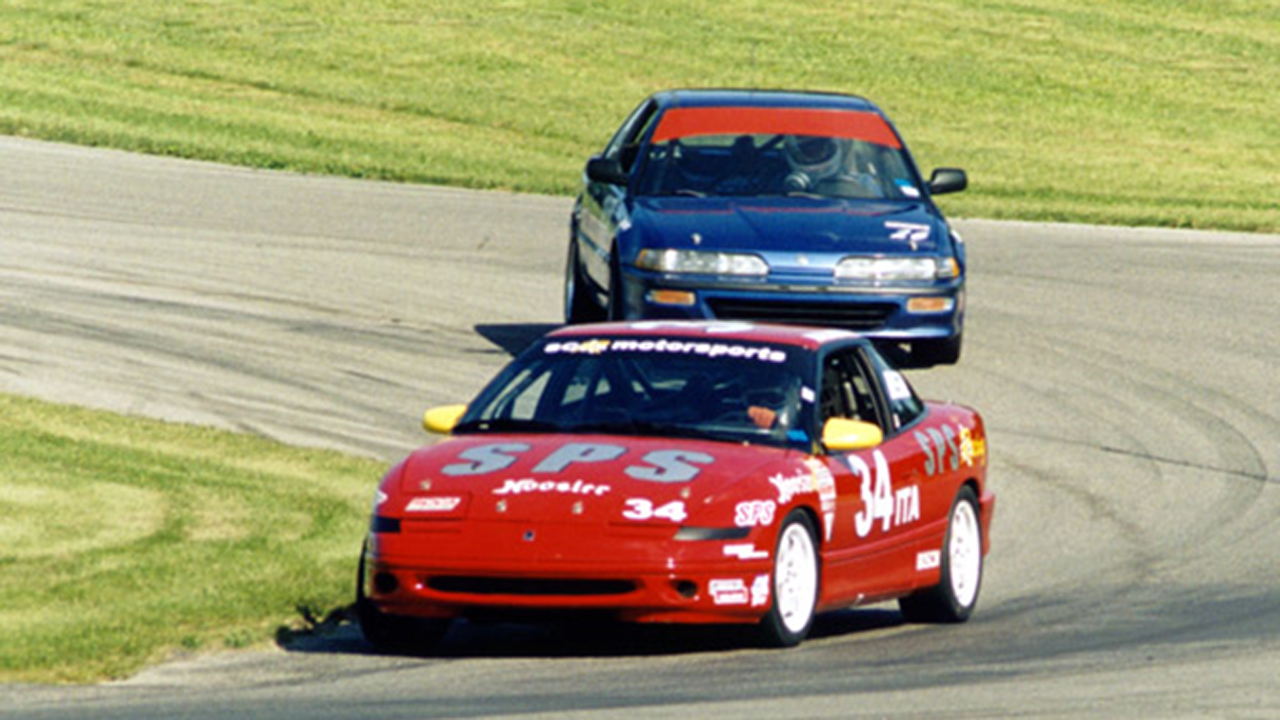 The paddock was buzzing with the talk of four Saturns in the top ten qualifying positions!  Unfortunately, there was an Integra (nice run, Jan) on the pole, but the #34 car was only 0.016 seconds behind, with the #21 car occupying the third spot back.  This time the small difference in numbers made for a huge difference in bragging rights.  Figuring that the start of the race would be critical, the Integra camp and the Saturn prepared to do battle by discussing starting strategy over a hot dog or two.

In a move that will be debated until the end of time, at the wave of the green flag the #34 car made a perfect move and beat the Integra to turn 1 by three car lengths, a lead that would never be relinquished.  To hear Jan’s side of the story, one would hear words and phrases like “cheater,” “jumping the start,” and the favorite “taking advantage of the new guy.”  Whatever.  We won the race to turn 1, and that’s all the racing that took place at the front.  The #34 car slowly increased the first lap lead and ended up finishing fourteen seconds in front of the second place finisher in class.

Further back in the pack, however, Mark Rushbrook was finding that several gears were not available to him…but unimportant ones like second and fourth (that ‘unimportant’ part was, of course, a joke).  Consequently he fell from third overall to LAST overall by turn 2 and spent the next couple of choice words deciding what to do next.  In a moment of clarity he realized that both third and fifth gears were still functional, and thus Mark’s race was on.  In spite of the lack of all even-numbered cogs (small numbers, again), he ended up passing over half of the field back and landed home in a solid sixth place, one spot behind fifth-place finisher Chris Berube in his blue-green (or was that Trans Am blue?) coupe.

And what about John in the #55 car?  Well, all we know is that when he got back to the paddock he was babbling incoherently about “passing this guy” and “getting all crossed up” and “having the time of his life.”  His seventh-place finish made sure that those same four Saturns all finished in the top ten as well.

Unfortunately, things were not quite as celebratory in the Integra camp as – in spite the fantastic drive to a second place finish – the car was disqualified for exceeding the SCCA limit for trackside noise.  By one dB. One little dB.  Yet another case of small numbers making a large difference.

Following the race on Saturday, each team had their special tasks to accomplish prior to taking the green on Sunday:

Of course, all of this paled in comparison to the fabrication taking place in the Integra camp.  In keeping with the ricer ‘bling bling’ image of the Acura marquee, a beautiful three-inch chromed tip was added to the car’s exhaust in an attempt to tame the noise concern from saturday.  Aesthetics aside, the glasspacking in the tip was selected for its authentic ricer rumble, and frankly, the car had never sounded so good. 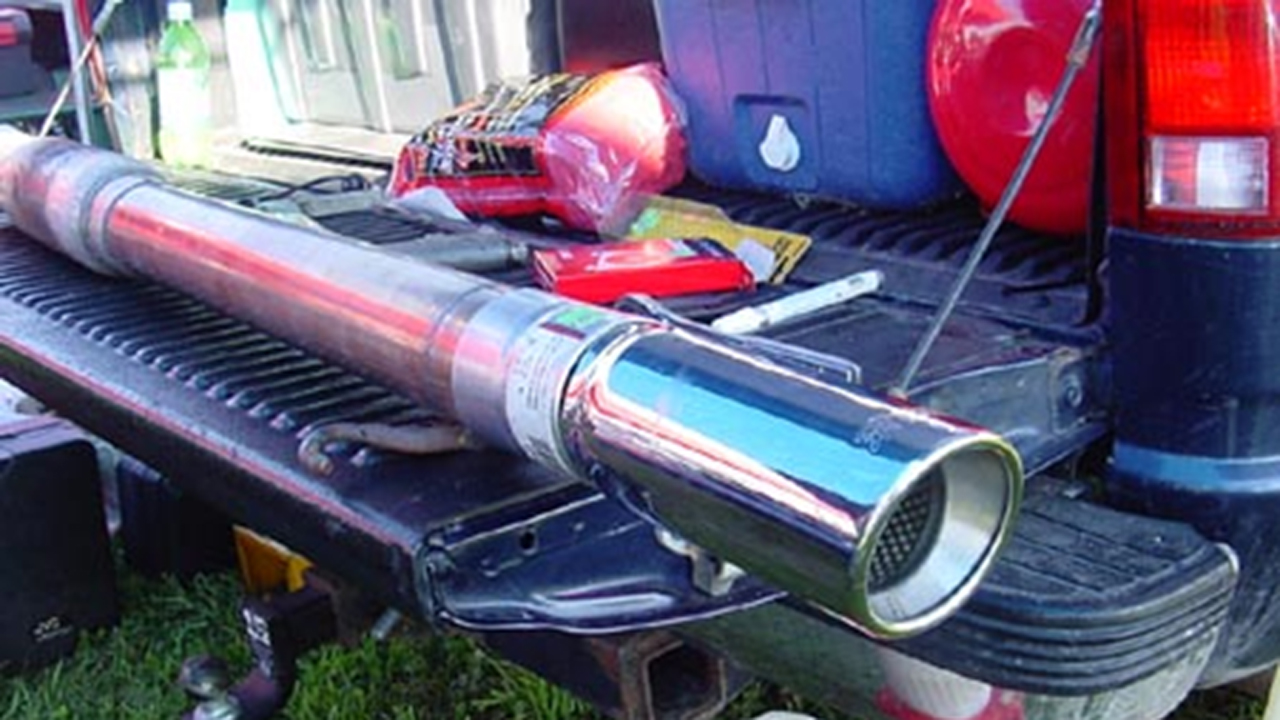 Yes, we are getting a lot of mileage out of this exhaust tip story.

While a visual, aural, and image-bolstering knockout, the tip failed to direct the hot exhaust gasses from the exposed fuel tank wiring underbody and proceeded to melt away just about everything in its path.  This resulted in the Integra making only three hot laps (small number again?) in qualifying before coasting to an inelegant stop behind the turn 2 worker station. 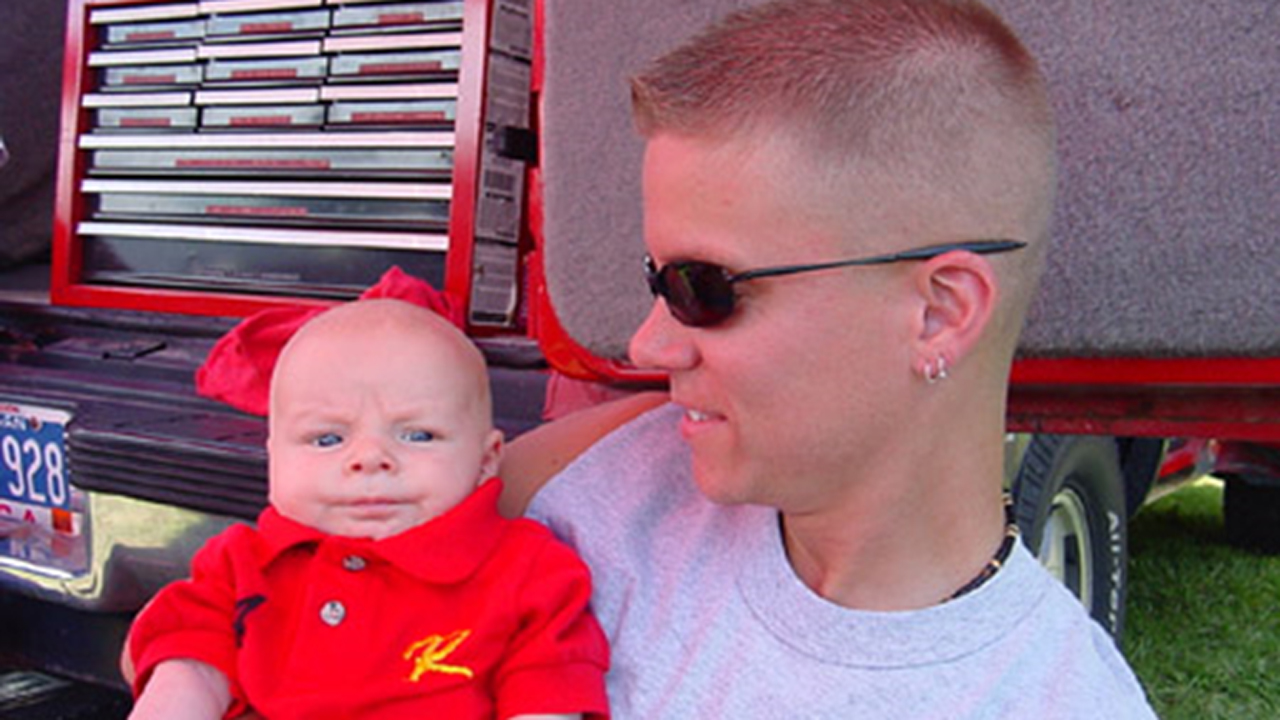 The #21 car did not have significantly better luck, with Mark having control over all forward gears for no more than four corners.  After that point, he was back to running the third-fifth marathon.  Rowing through the gears in this manner was good enough for a fourth-place qualifying spot, but the car was still well off its potential.

In the team scR camp, however, everything was going to plan.  With a fresh battery and a new set-up derived from Saturday’s race, the team ran the car around the course in 1:32.0 – the best time of the weekend, and good enough to land them on the pole.  The next closest ITA competitor was over 1.4 seconds behind…another small number, but this time making a huge difference.

At the drop of the green, the #34 car again pulled away from the field heading to turn 1 and never looked back.  Fifteen laps and 11.8 volts later Tom and Pat were able to share in their second victory lap of the weekend, hooting and hollering all the way.  Back in the pack, however, there was a race taking place… 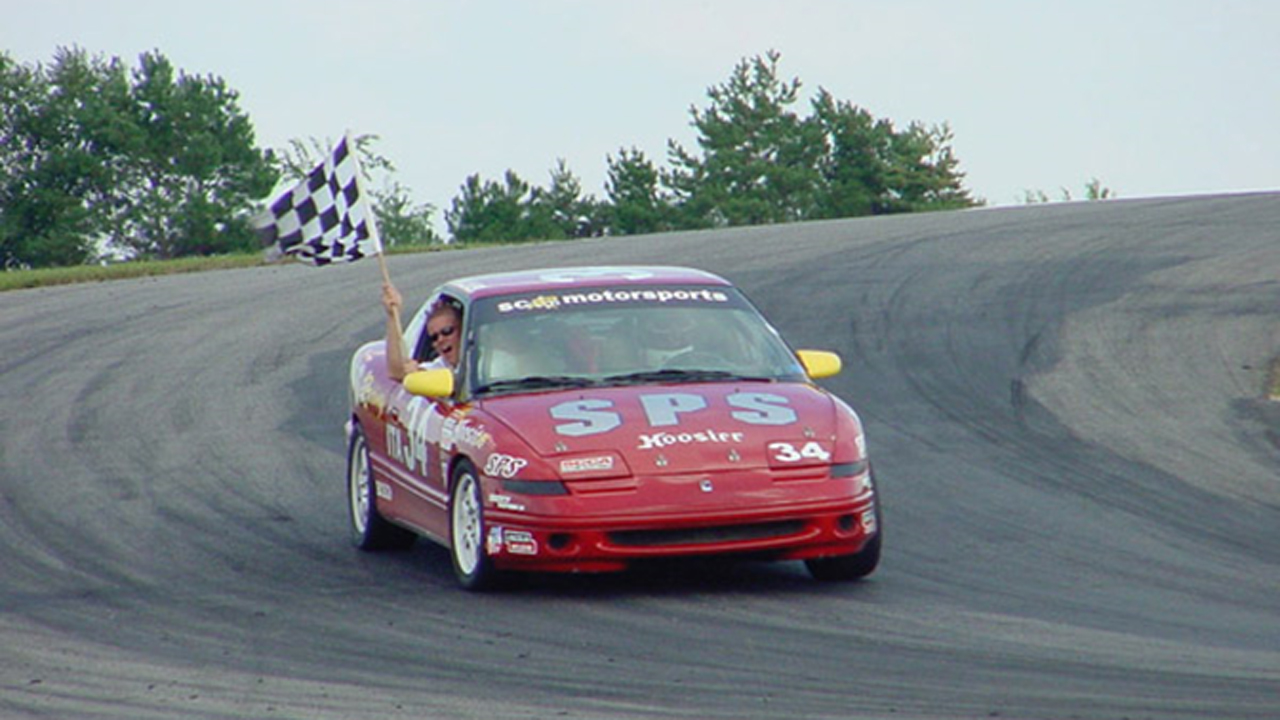 With a fast ITB car causing a small traffic jam at the start of the race, it was non-stop action between the horde of Saturns and a recently-rewired Integra.  All was looking good for the #21 car mid-race with a solid second place finish shaping up until – this time about seven laps into the race – the shifter cables wigged out yet again.

Note to self: check the shifter cables before Mid-Ohio!

This small miscue let the Integra (who had crept up from a fifth-place qualifying spot) quickly by, and forced Mark to soldier on to a third-place finish at the checker.  The Saturn coupes of Chris and John rounded out the top positions in seventh and eighth because, in John’s words, “Someone had to beat up on those guys in the back of the pack with a Saturn!”

And so ended the biggest Saturn race weekend ever.  A pair of wins, a pair of front-row qualifying efforts, a pair of fastest race laps, and every team car finishing every race in the top ten.  Do you think anyone in ITA is noticing a trend here?  See you at Mid-Ohio!