With only three race weekends on the combined scR motorsports race agenda, our season-ending event was a pull-out-the-stops assault on our favorite 2.4 mile stretch of Ohio blacktop.  Six teams could be found in the scR main paddock area, each one intent on closing the books on their 2002 season with a bang!

Our weekend began with what was supposed to be a gentle warm-up session early Saturday morning.  Conservatively, each of the three scR Saturns took the green and found the track to be cold, slippery, and slow.  Moderation was the name of the game until the track, cars, and drivers would warm up.

All was going well until back in the paddock parts began to fall off race cars.  Literally.  It all began when it was discovered that the #55 car had lunched yet another left front wheel bearing, but this time it took out the left CV joint as well.  John and his crew spent the next two hours pounding, cursing (mildly, of course), and reassembling in hopes of making the qualifying grid later that afternoon.

Three paddock spaces down, the #21 car was having troubles of its own.  Based on Mark’s observation of “Hey, my car doesn’t turn left!”, a complete chassis inspection was performed.  The culprit was found to be a partially failed front anti-roll bar bushing.  Yikes!  Fortunately, it was discovered that a bushing support washer from James’ – now departed – 1977 El Camino (yes, we keep parts forever in the toolbox) was a perfect fit, and all was back to normal.

In the middle of it all, the #34 car was having yet more issues with brake performance.  The sloppy pedal feel was theorized to be a function of rear wheel bearing slop, so the crew hustled to do a complete left and right rear wheel bearing change during the lunch hour.

Besides that, everything went fine.  Everything that is except for a certain Aluminum jack in the Integra camp which self-destructed, but we promised we wouldn’t mention that here.  Forget we even said that.

With a little bit of luck and a ton of teamwork, all three scR Saturns were able to take the green flag for Saturday afternoon’s qualifying session.  The conditions were perfect, and somehow all of the morning’s fixes held together – John’s car wasn’t spewing bearing grease, Mark’s car turned both right AND left, and James’ car had a much-improved brake pedal.  ScR motorsports was off and running once again!

Bearings, bushings, brakes, and all, the team was able to place two of the three cars in the top five.  The #34 had landed in the fourth qualifying spot, and the #21 car right behind in fifth.  The #55 car was a bit farther back, having qualified fifteenth in a field of twenty, but lap times indicated that the learning curve was still far from over.  The race on Sunday would later prove this theory to be true. 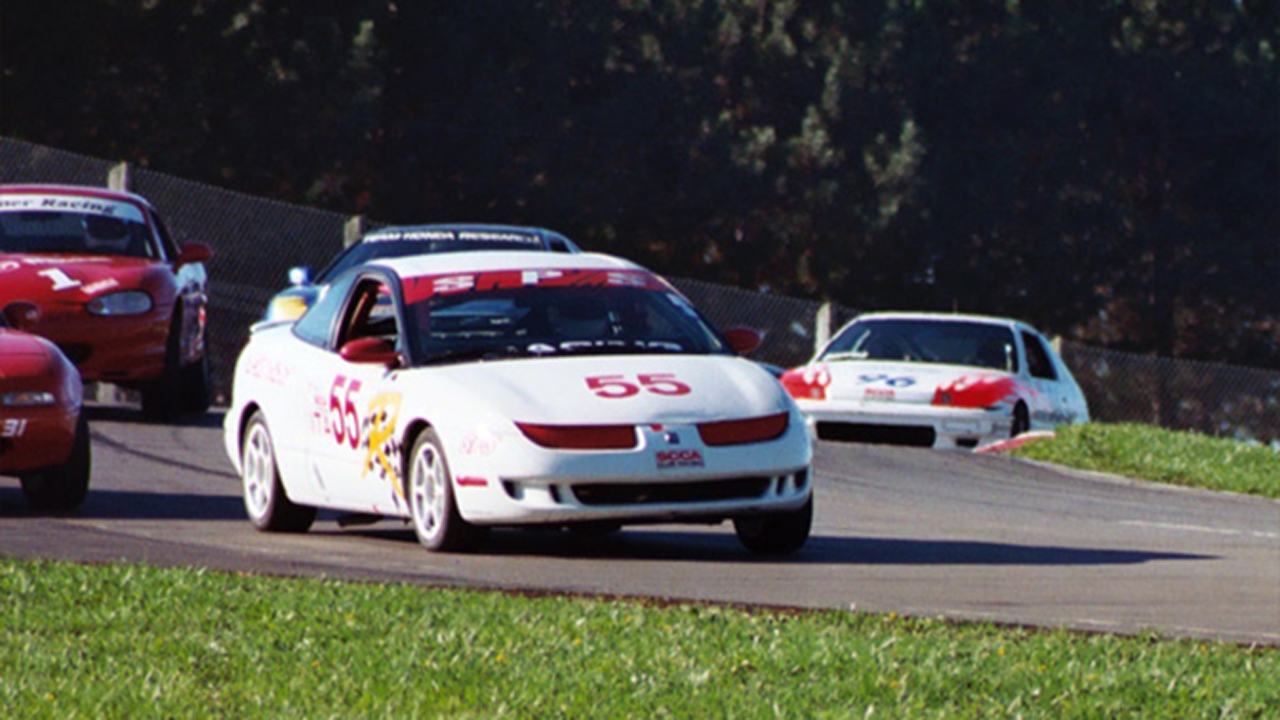 Over beers and Bloomin’ Onions later that night at (where else do we eat?) Outback, the team talked strategy for race day in-between poking fun at the waitress.  Three DQ Blizzards later, and it was time to rest up for the day ahead.

Sunday morning’s race brought over thirty spectators to the scR paddock area – Zack and Evan included.  Everyone was bundled up tight, as the cool fall air was having a hard time clearing 45 degrees, but hey – that’s how you make horsepower, right?

At the start, the #34 was quick to clear the third-place qualifier and by the keyhole chicane had established a position it would not relinquish, bringing home another podium finish for the team.   The best news, however, was that at the finish the #34 car was only 2.8 seconds behind the race winner and had posted an scR-best lap time of a 1:45.2.  Every time we run this track we go faster… 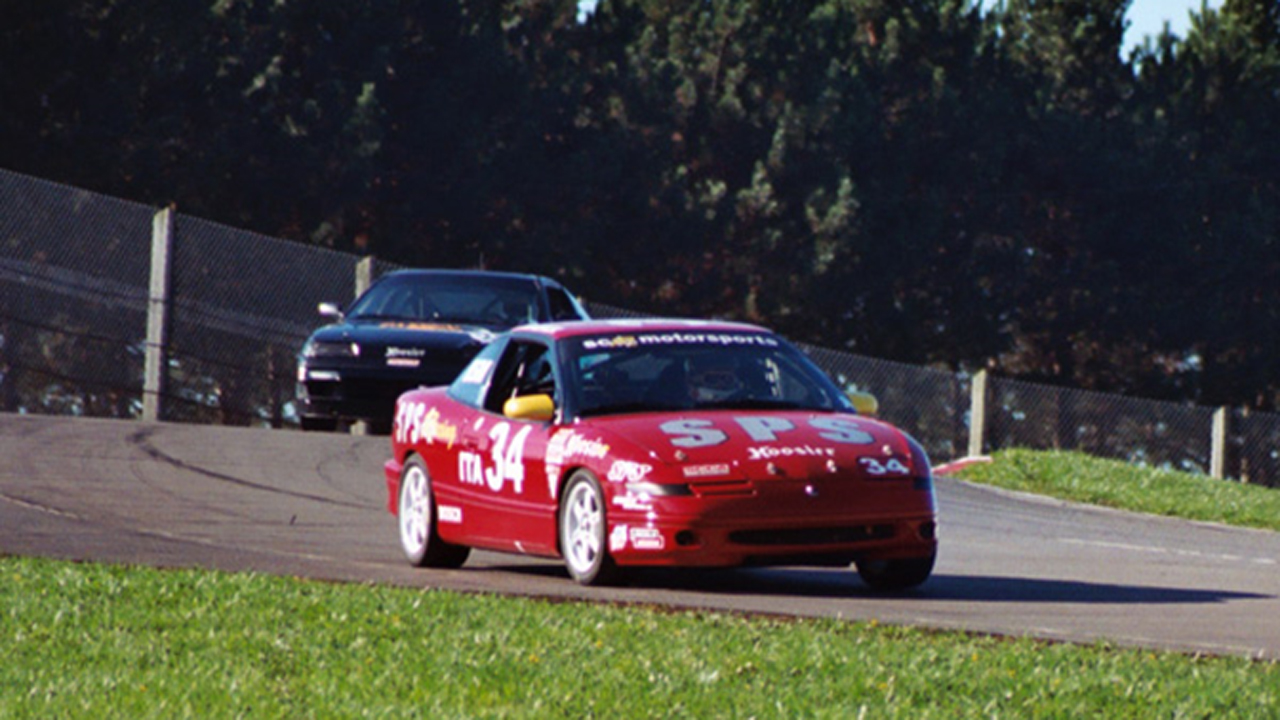 The #21 car managed to maintain position through the first-lap scramble and would ultimately drive home to an impressive fifth-place finish.

Not to be forgotten, back in the pack John Comeskey was having a blast, dicing it up with a horde of ITA competitors.  Throughout the eighteen-lap sprint, John would ultimately pick up three positions, placing him twelfth at the checkered flag.  We have got to get this guy an in-car camera next year! 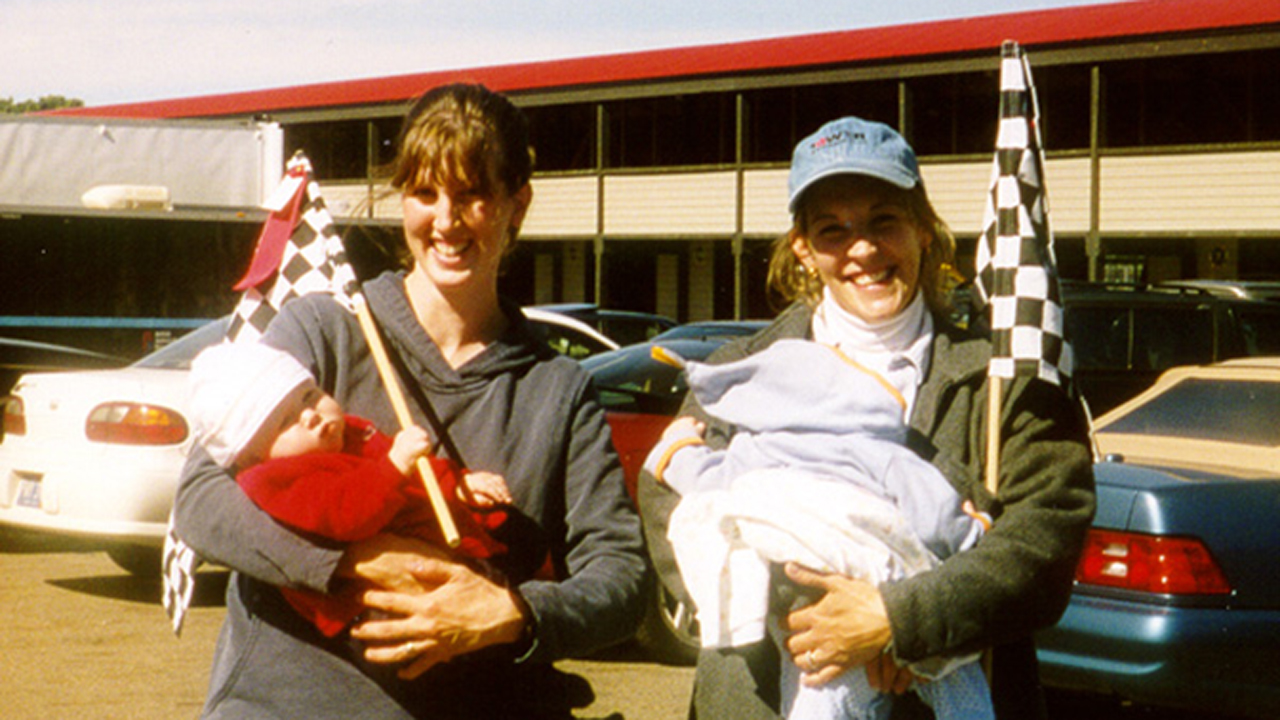 While that may be a lofty goal, we have already started to plan the transmission, engine, and chassis improvements for next season.  Armed with a bag full of pixie dust, we’re going to lean on everything we have got just that much harder in attempt to catapult these cars to the front.  After all, if we don’t do it next year, we’ll be too caught up with pre-school activities to ever try it again.

Thanks for riding along in 2002.  Rest assured that 2003 will be a whole different ballgame.  The ITA field is about to see a few angry Saturns running away into the distance!