Where do we go from here?

As we close the book on what was undoubtedly our most successful race season to date, we are in the unusual situation of trying to determine what it is going to take to rise up those last three steps of the ITA podium.  Never before have we finished a season so strongly, nor on such a high.  To the crew, fans, and supporters of scR motorsports, thanks for helping to make 2001 “our finest hour.”

Coming off our win at Watkins Glen, we were heading to Mid-Ohio with high hopes.  The car set-up finally appeared to be maturing, the team was settling into its groove, and – as a new secret weapon – we had recently bolted on a set of Volk racing wheels.

With the car at minimum weight (at last!) the list of usable excuses was a bit shorter as well. 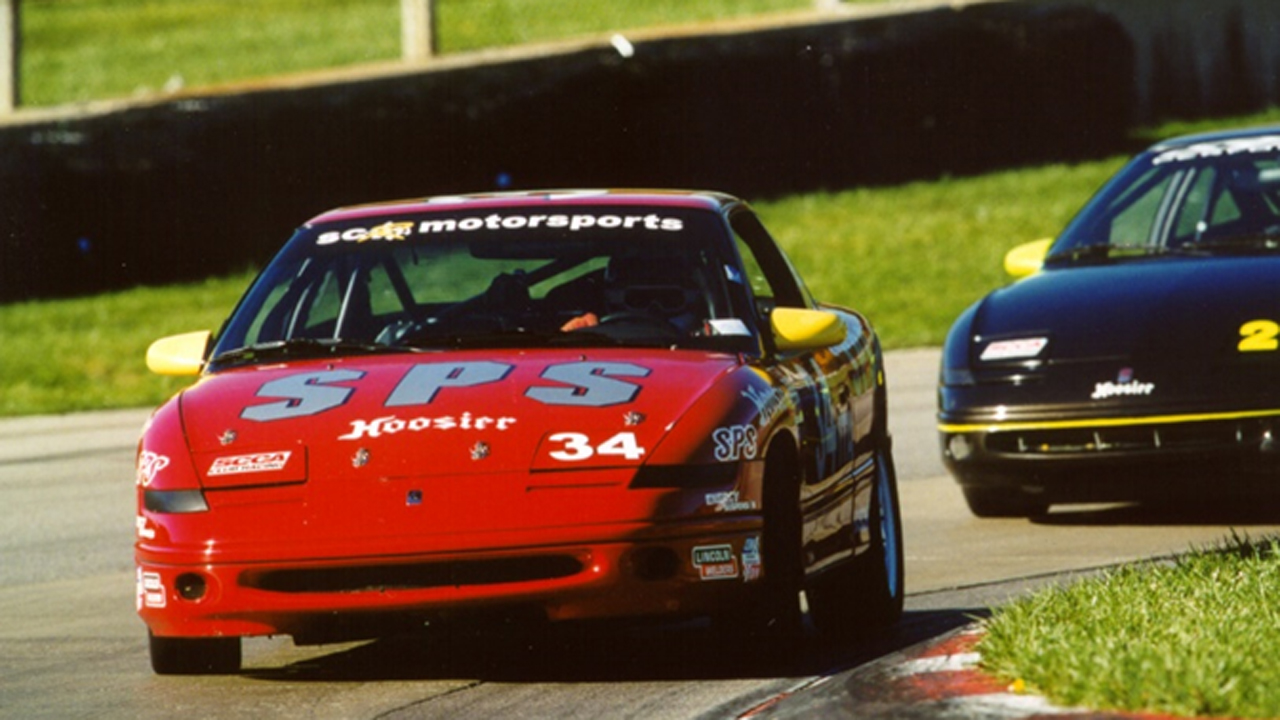 As it turned out, everything went to plan.  In a field of 23 ITA cars we managed a third-place qualifying spot and turned in our best lap time of the year – a 1:46.4.  While we were still a tenth of a second off our best 2000 lap time, the conditions were far from favorable.  We headed to the grid on Sunday looking to make it two wins in a row.

However, before actually making it to the grid we had to deal with a host of off-track issues such as a canopy which decided to commit hari-kari and a quarter-inch thick layer of frost on the race car.  Since the canopy was a complete write-off, we elected to divert our efforts at de-icing the car before making our way to the track.  Luckily, Pat, Dan, and John had bought knit caps the night before, so at least their heads were warm…

When the green flag flew the next morning the track temperature was only 32 degrees Fahrenheit (that’s 0 Celsius for you Canadians, eh).  By turn 1, the second-place qualifier found out just how slippery cold tires could be and sailed off track before he knew what hit him.  Not to sit back and watch from the sidelines, the scR^3 team (our #34 car and Mark Rushbrook in the #21 SC2) quickly filed in behind the leader and proceeded to run away from the pack.

After twelve laps of follow-the-CRX, we made a pass for the lead heading into the keyhole.  It stuck and we actually led one complete lap before he managed to return the favor running through Thunder Valley.  Try as we may, we simply couldn’t catch him in the remaining three laps, but at the checkered flag we were a scant 0.6 seconds behind his car…less than five car lengths at 80mph. 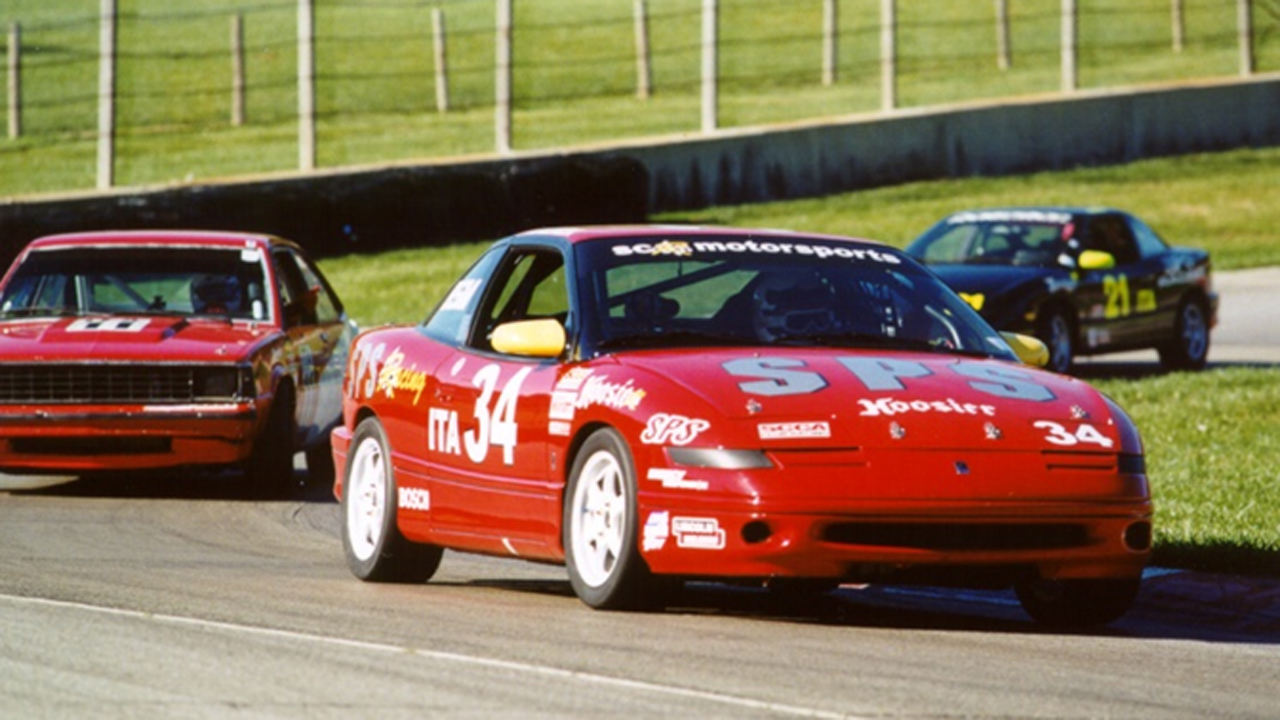 On the way to our second-place finish we also managed to knock off a 1:45.8 – a new scR record for our favorite track, only 0.2 seconds behind the winner’s best.  The icing on the cake was Mark’s third-place finish, also with a personal best of 1:45.8.

(Details being what they are, we actually ran a 1:45.87 while Mark ran a 1:45.89, so we get bragging rights as the fastest ITA Saturn around Mid-Ohio.  Not that we would tirelessly remind Mark of this or anything…)

So, in our final five races of 2001 we had managed to rack up four second-place finishes and one win, but finishing well at the ARRC – our end-of-year IT Championship – would be another matter altogether.  With the fastest cars in the country showing up for a winner-take-all shootout, we had to be at our best just to show well.

Somehow, we made it through the vertical hills of Kentucky (30mph, foot to the floor), the suspected stalker at the Olive Garden (he doubled as our waiter), and the North Carolina State Police at Deal’s Gap (after the race, but that’s another story) to land the red SC in second place on Friday’s first provisional grid.

Let’s think about that for a minute – a Saturn on the outside pole at the ARRC.  How the heck did that happen?

Well it really didn’t matter, as after the second qualifying session we fell to fifth, but hell…that was something to be proud of too.  Tom bought drinks that night at dinner and Pat bought the DQ for dessert to celebrate.  Go team!

At the green flag, the #9 car in fourth place lost his oil drain plug.  Not only did this ruin his day, but after he spun in his own oil not once, but twice, we inherited fourth place, right on the heels (no, race cars don’t have heels, but get over it) of the third-place CRX.  Let the games begin!

After a few laps dodging the oil strewn over the track, we passed the CRX diving deep into turn 1 and held on to third place for two short laps.  He was able to outbrake us going into turn 10a, but was not able to open up a significant advantage until lapped traffic began to crowd the track.

Not that there is ever a good time to encounter lapped traffic, we very quickly found ourselves getting caught out in several corners behind slower cars.  Slowly the CRX pulled out a multi-second advantage as the fifth-place Integra behind set his sights on our rear fascia. 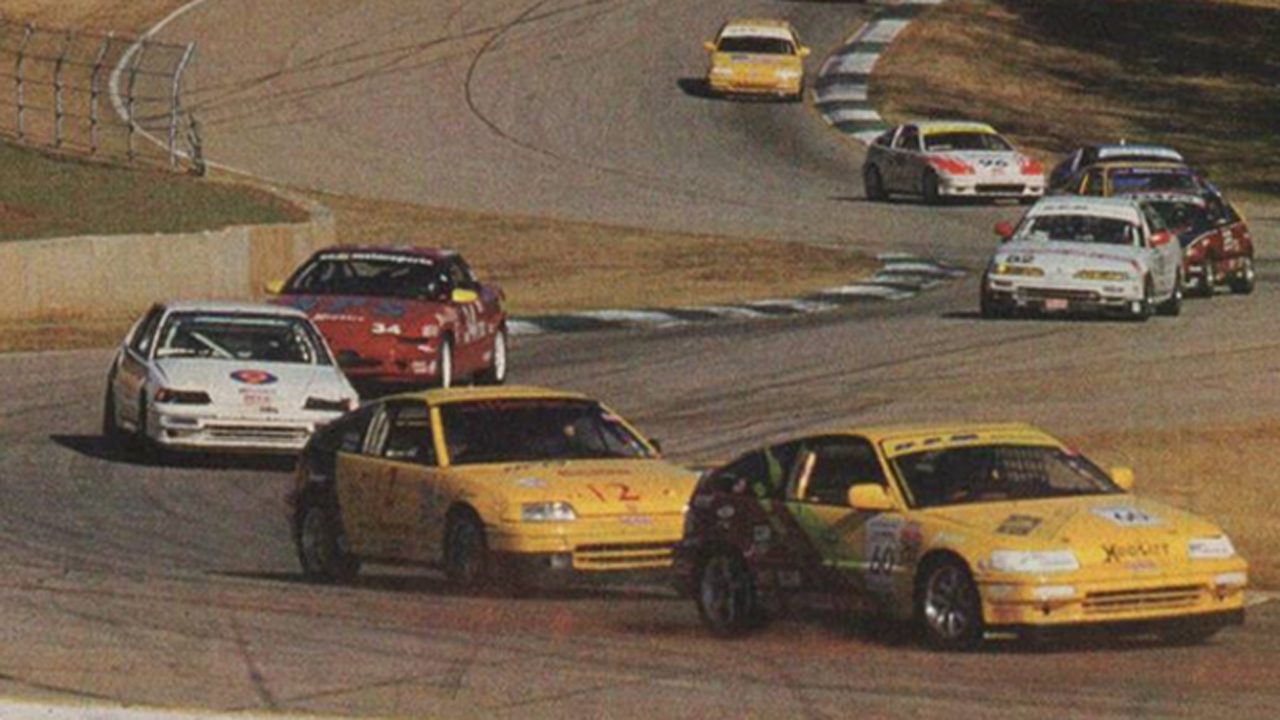 Somewhere around mid-race we tried to pass a lapped car going into turn 5, and frankly we didn’t come out of it too well.  The car pushed, ran over the apex, and headed directly for the gravel at the outside of the turn.  Not wanting to get stuck in the loose stuff, the throttle stayed to the floor, but the Integra made his move and took over our fourth-place position.  Damn!

With our cars being so evenly matched we ran close, closer, and closer yet as the laps ticked away.  With two laps to go we made a move running down the hill on the inside of turn 12 (yikes!) only to have the door closed kind of abruptly at the apex.  We had to lift (double yikes!) to avoid contact, opening up a small gap that we could not then make back up.

As it would turn out, the race leader broke on lap 18, promptly landing us in fourth place at the stripe.  Honda, Honda, Honda, Saturn, Honda – the five fastest cars in the country.  Who would have thunk it?

Following the thirteen-hour tow home, the race car was unloaded and driven ceremoniously into its winter home (it’s really just a shed).  Car cover in place, the door was shut and the planning for 2002 began.

James: “Maybe we should try Production class next year.”

Pat: “How about trying to actually WIN the ARRC?”

Tom: “I don’t care as long as we get the canopy repaired!”

Dana: “How about a dining room set?”

So again, the story continues.

In 2001 we went faster at every track, broke a lap record (an scR first!), won a race in our home town, made new friends (yes, some of them even drive Hondas), and never finished worse than fifth.  On top of that we finished every session we started, never had a mechanical failure, and managed to tighten every lug nut every time.  How are we going to top this in 2002?  I sure don’t know, but it will be fun trying. 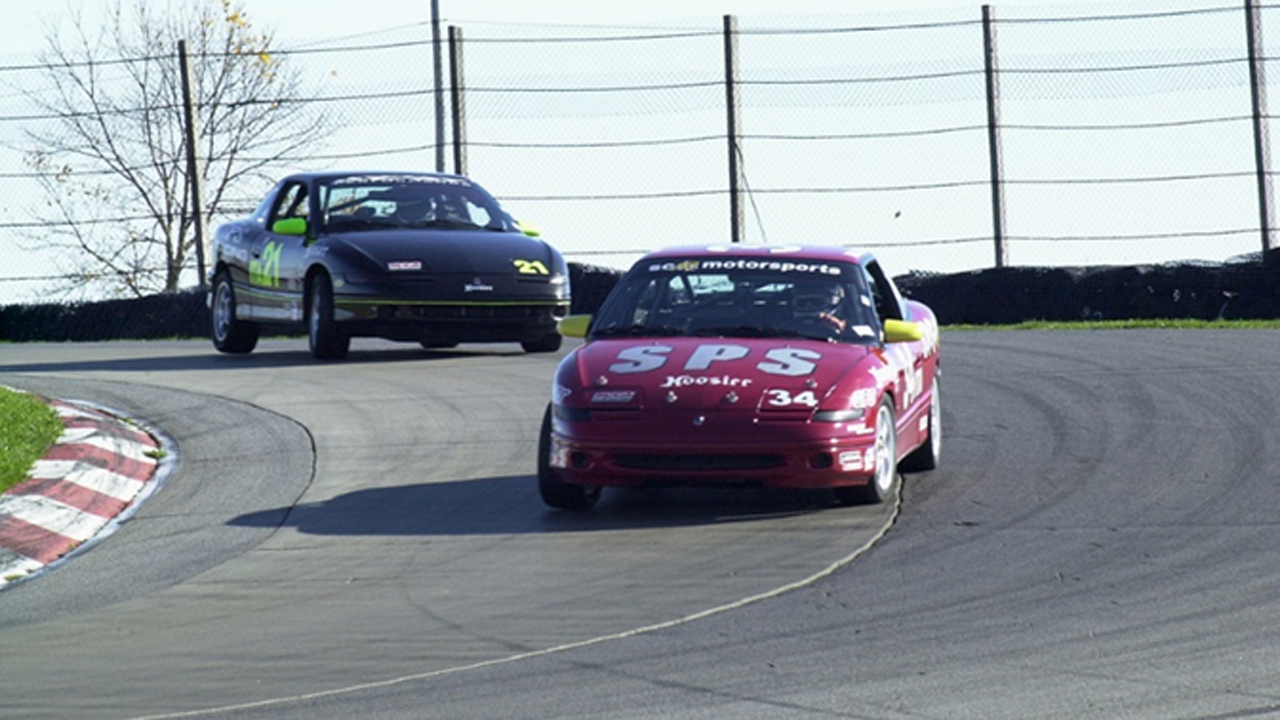 Finally, thanks again to everyone in the scR extended family for putting us out in front.  From the track-side crew (Pat, Tom, Dan, Alex, John, and Tim), to the technical support (Mr. Womack and Mr. Darling), to our sponsors (SPS, Hoosier, STOPTECH, and webmaster Craig), to Dana (the one who finances this addiction), a sincere word of thanks.  For a bunch of amateur club racers, we put on a pretty good show, don’t we?

See you next year.