Grattan and the Glen

As many of you have noticed, it has been quite a wait since the last scR newsletter – over two months in fact! While we have been neglecting the computer keyboard, we have been frantically trying to keep our car in the front of the pack. Read on to see just how successful we have been…

Coming off of a frustrating run at Mid-Ohio in late July, the team was heavily focused on car set-up heading into the weekend. New bearings, hubs, brakes, and tires accompanied a ‘next guess’ at our chassis tuning. While the car never really handled right at Mid-Ohio, review of our in-car camera action indicated a very clear direction – the car was simply too loose. It was time to tighten up the chassis. 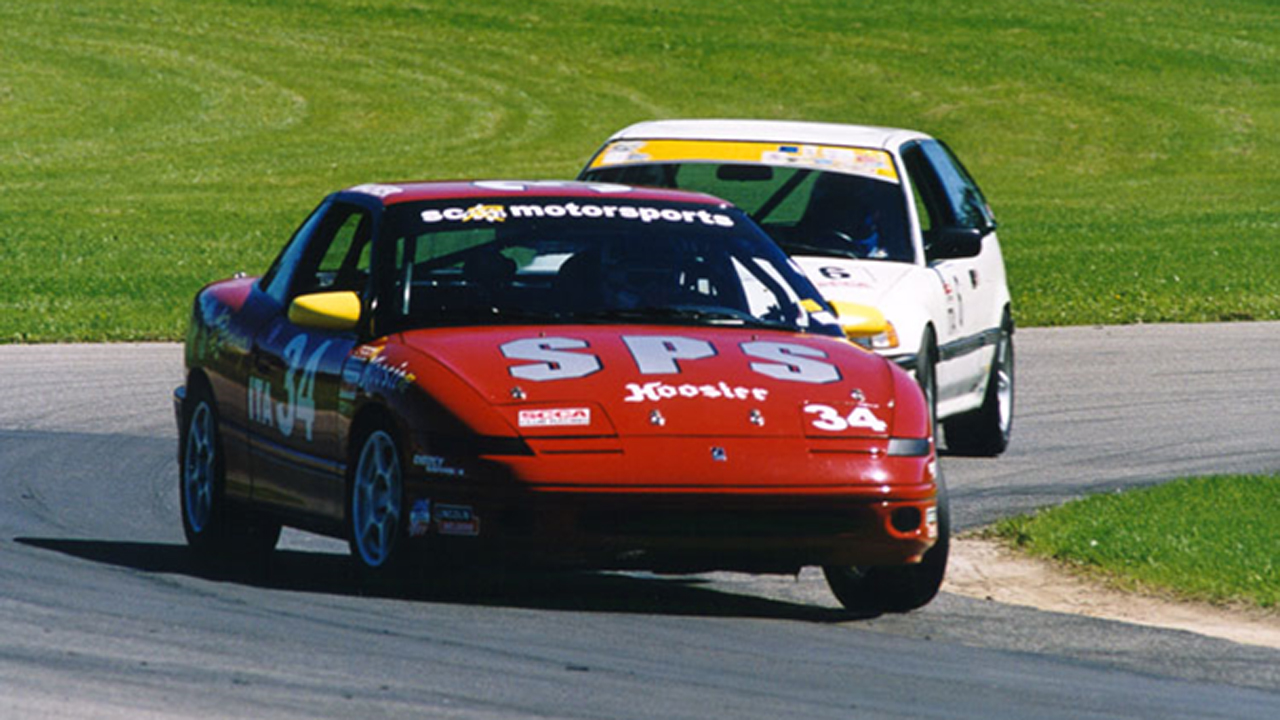 For qualifying, we adjusted the rear bar to full soft, dialed the front shocks up one turn, and dialed the rear shocks down the same. The green flag flew and immediately it was clear that while we had certainly tightened up the car, we had indeed gone way too far. While the car was stable and predictable, it simply refused to turn with any sense of urgency.

Our fifth-place spot on the grid had us parked right behind the #21 Saturn of Mark Rushbrook. As the green flag waved, Mark got a great start and headed up into the second-place position while we remained firmly planted in fifth. Our fortunes would change shortly, however, as rear shock and rear bar adjustments made themselves evident and the #34 began to pick up speed. The fourth place and third place cars fell behind the #34 car by the end of lap five, leaving us to run after the leader solo for the duration of the race. Although we couldn’t catch him in the remaining laps, we ended up running our best time ever at Grattan – a 1:31.9 – and knew there would be more in store for Sunday. The car was finally coming to us, and a second-place finish was our best of the season.

Not wanting to mess with a good thing, we left the car alone for Sunday morning’s qualifying session. Was the Saturday performance a sign of things to come or simply a fluke? We were about to find out.

Two laps into qualifying, the brake pedal turned to mush and pretty much, well, sucked for the entire session. Lap after lap we tried to shave off tenths of a second, but the mysteriously soft pedal was obviously holding us back.

When the checkered flag fell after twenty frustrating minutes we were still second on the grid, but off the pace we had established on Saturday. At a 1:32.3, however, we were still faster than we had been in all of 2000, so something was obviously still working right…

Fortunately, the mushy brake pedal was diagnosed and remedied by the always incredible weekend crew support. When the green waved that afternoon, the brake pedal was right back where it needed to be. Let’s go! 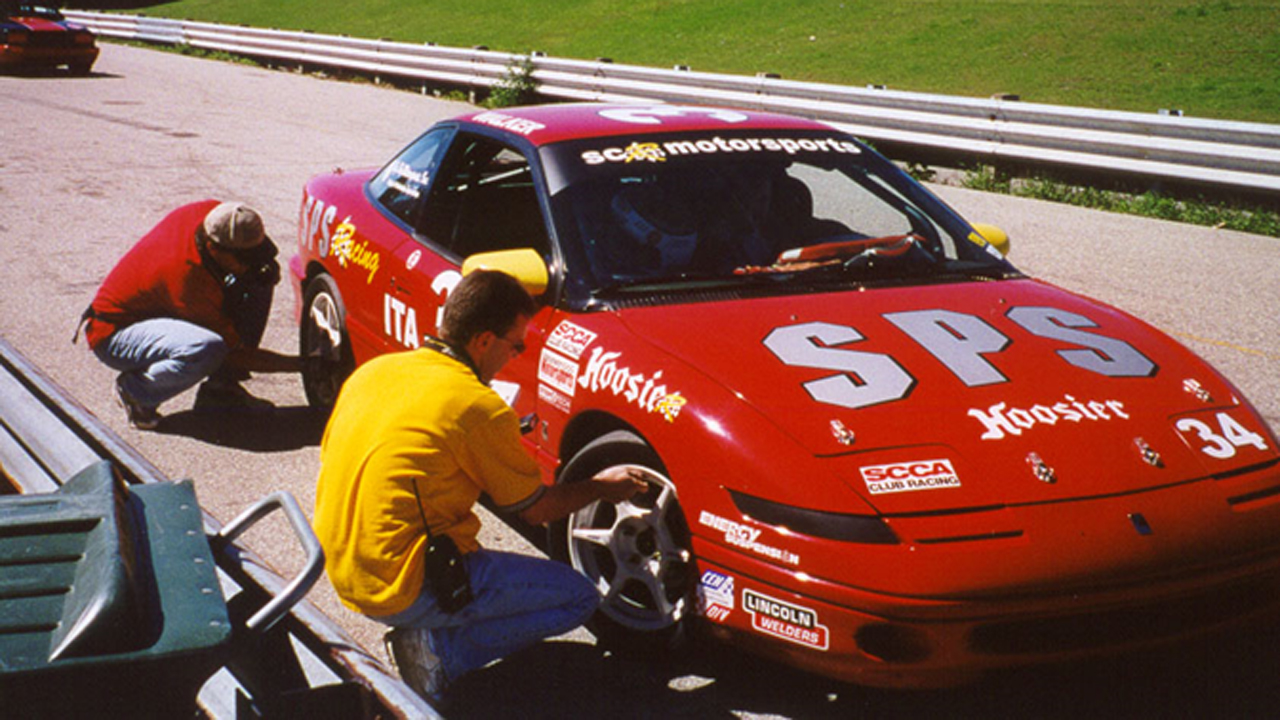 For the opening five laps, we actually stayed close enough to the leader (car #55…sound familiar?) to actually give chase, but on lap six the SC began to make one of those “bad” sounds…wheel bearing, anyone?

By lap seven, the bearing could be both heard AND felt in the steering wheel. By lap eight, the wonderful aroma of bearing grease filled the car, delighting the senses. It was at about this time that we backed down a couple of seconds per lap to assess the situation and see just how far we could run the car before the wheel came off and ended up in a field. When three of the five senses indicate a problem, chances are it’s pretty significant. Majority rules in this case!

The celebration continued after the final results sheet was posted. According to the officials, we had again bested our best time at Grattan – a 1:31.6. Coming home in second place and running only eight tenths of a second off of the track record had our spirits soaring. What a great weekend!

After replacing more wheel bearings (we need to buy our own press one of these days) and otherwise tidying up the car, we began the eleven-hour haul to Watkins Glen. All was painless until the headlights decided to spontaneously shut down at 8:30pm on a nice, twisty two-lane road twenty miles from the track. Not to let electrical gremlins again spoil our fun at our favorite “big” track (remember the alternator problem last season?), crew magician Alex devised an elaborate series of sparking wires which somehow restored enough light to make the registration booth as they were closing. At least the woman behind the counter had a sense of humor.

Qualifying in a pack of seventeen ITA cars on Saturday morning was an exercise in dicing through traffic. We ran the Glen “short course” which provided plenty of opportunity for slower traffic to interrupt a solid qualifying run. Careful timing and passing prevented a truly quick lap, but by the end we were second on the ITA grid, only five tenths of a second off of the pole position. 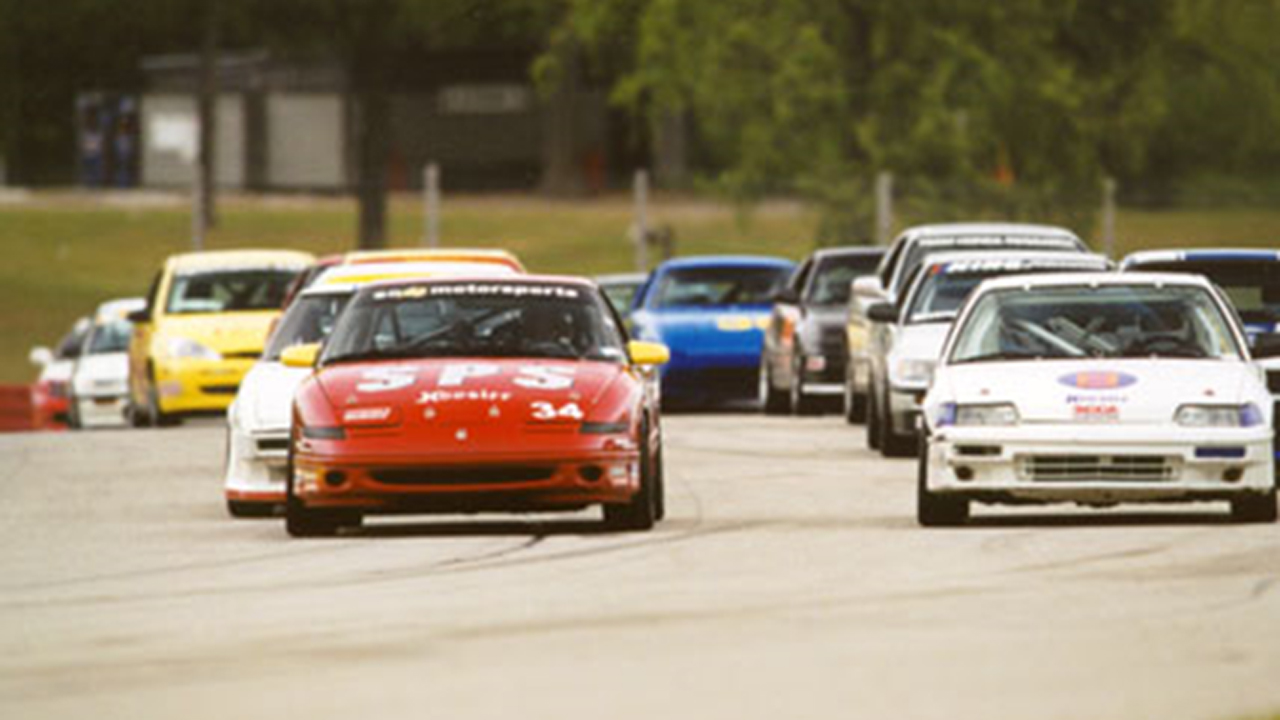 Continuing our luck with the chassis set-up, we did nothing more than wash the car for the race that afternoon. After one aborted start (I still insist that I did NOT jump the green, regardless of what the PA guy said) we took off for turn one, three wide. I love racing here!

Early on in the race the #34 car was tied up racing with out-of-class (ITS) cars which drastically impacted our ability to catch the pole sitter. By the time we had cleared ourselves of the “slower-faster” cars, we had an eight second interval to the leader. We turned up the wick and slowly began to reduce the interval – six seconds, five seconds, four seconds, two seconds, checkered flag!

Just as we thought a race for the win was in our grasp, the race was called four laps early due to a big mess in the esses. While second place was certainly not as sweet as an outright win, we had set the fastest race lap in ITA – a 1:32.7 – and had the winner wondering what we were going to follow up with on Sunday morning…

To make along story very short, we kicked ass in qualifying. The car was handling as well as it ever had, we had a draft for several laps, the weather was cool but sunny, and apparently the planets were all aligned as well. Not only did we manage to qualify on the pole (our first time this season!), we also managed to break the track record by two tenths of a second – a 1:32.1.  Guess all that practice in the WRX paid off!

At the start of the race that afternoon we started an intense four-lap battle for the lead. We swapped the top spot no less than twice per lap with the #26 CRX, dicing in every corner and drag racing down the straights. Unfortunately, during a three-way battle going into the bus stop, the #26 car had a suspension member let loose which caused him to turn left directly in front of our car…at 117mph! The ensuing wreck left the #26 car, as well as an unfortunate ITS RX-7, against the guardrail as the plastic-bodied SC continued on its merry way. 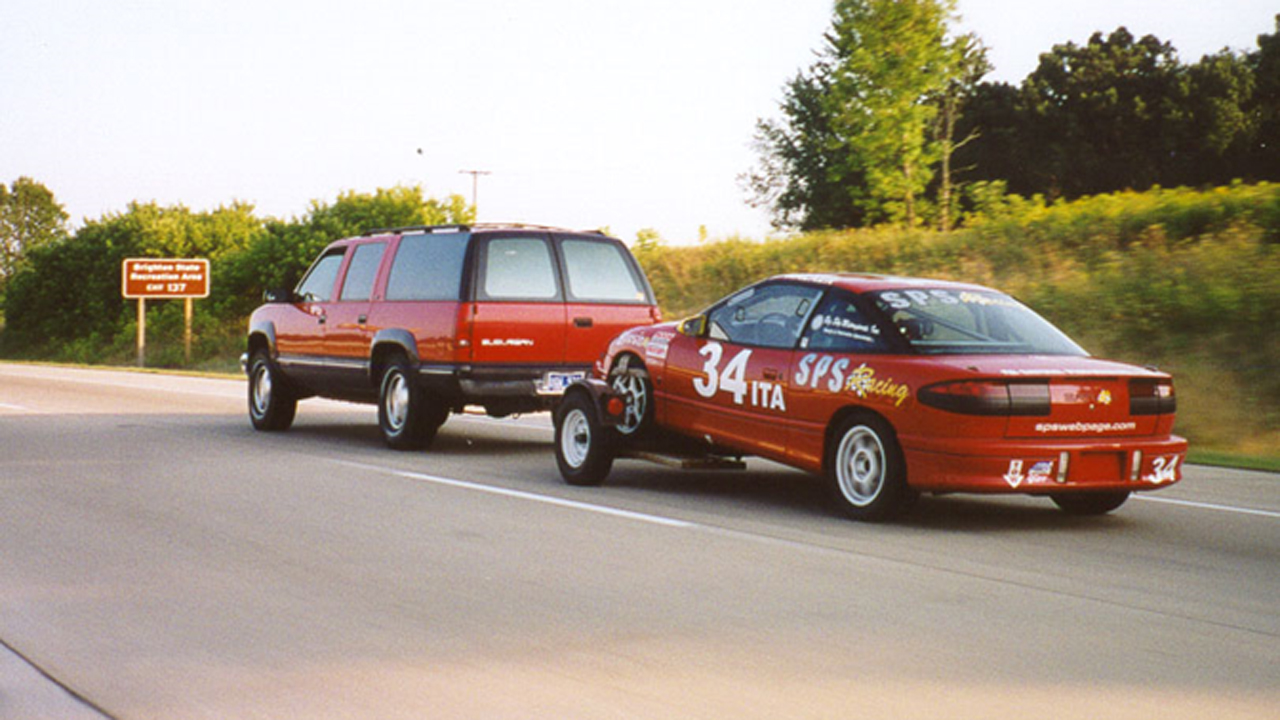 While we had certainly dodged a bullet, the hit taken on the left front wheel made the wheel bearing very, very unhappy. Consequently, we backed off our race pace a touch and did our best to limp the sick car home. As it would turn out, even sick the SC was screaming fast, as we continued the rest of the way home unchallenged for our first win of the season. Wheel bearing and all we still had a twenty-three second margin over the second-place car. Way to go team – a checked flag for the wall!

So, now that we finally believe that we have the car sorted (cross your fingers), we head back to Mid-Ohio on October seventh. We KNOW there is more time left in this car at this track…now we just need to go out and prove it. With three second place finishes and a win in our last four outings, the bar has been raised once again.