Let’s set this track on fire!

As you can well imagine, things were hopping over the three-week span between our season opener at Waterford and our first SCCA Regional competition at Grattan.  The oil pan gasket was replaced while the motor was still in the car (thanks Steve!) in an attempt to cure the leakage issue.  The throttle body and all of its sensors were replaced in trying to solve the stalling concern.  The entire braking system was dissected and revamped while looking for a cause of the phantom brake pulsation.  Finally, the left rear hub was replaced when it was discovered that the wheel bearing was toast. 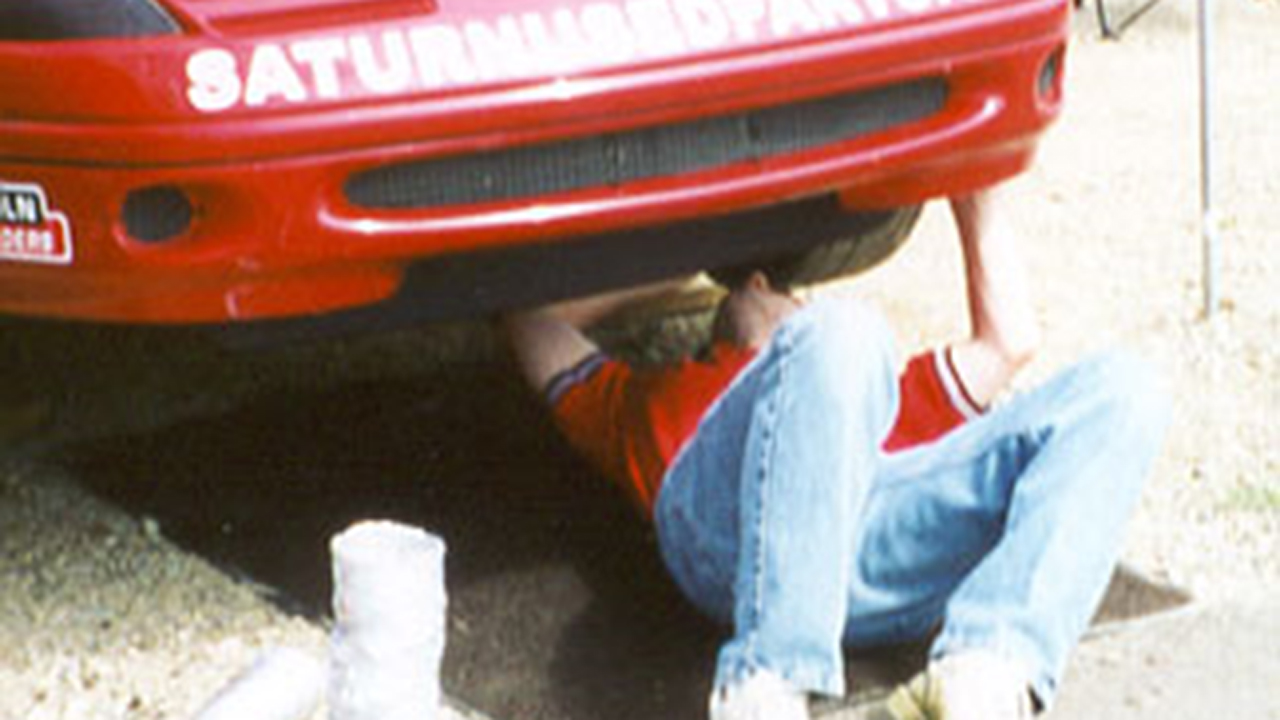 Unfortunately, the bushing / strut / mount compliance / bobbing / weaving issue discovered at Waterford was left unresolved, as our long-term solution requires cutting, welding, and developing a true camber-plate front-end set-up.  Although the parts were in hand, the fabrication and set-up could not be accomplished in time.

Besides that, the car was washed, waxed, and rolled up on the tow dolly in anticipation of great things at Grattan.  Tom, Eric, and I were gunning for the podium, but we knew we would have to fight for it!

The big question on Saturday was not IF it was going to rain, but WHEN.  The Weather Channel had predicted a 100% chance of the wet stuff the night before, and the skies were sure looking the part.  As we pulled onto the grid at 10:00 the track was still dry, but the clouds were circling rapidly – we had to get in a fast lap, and get it in early!

Before the end of the warm-up lap, we had the #34 car running as fast as it could, hoping to beat the oncoming showers.  The lap times dropped, dropped, and dropped some more as both the car and driver began to find their rhythm.  A wild ride sideways through the infield at the apex of turn 3 halfway through the session served as a great reality check – we had to be fast, but we had to be clean too.

For the remaining 4 laps the car and driver steadily improved to the point that the lap times began to level off.  Finally, at the 18-minute mark the drops began to show on the window, followed shortly by the checkered flag indicating the end of the session.  The car was still bouncing, the brakes were still pulsating, and the idle problem had returned, but the session was a success – we had taken over 5 seconds off our SSC lap times.  Evidently, we were doing something right!

When the grid was posted the reality set in – we had captured our very first pole position – and third overall – with a 1:32.8!  Go scR!  The field of 14 cars was loaded heavily with Honda and Mazda iron, but our Saturn was the only domestic car in the top 12. The paddock was filled with talk of “what are those guys packing over there?”

So this is what it feels like to be on top.  Wow.

Remember how much we love the rain – part 2

The rain continued to fall as the morning qualifying sessions came to an end, and made the upcoming decision paramount.  While the rain was definitely visible and was wetting the track surface, puddles were definitely NOT forming…and without standing water, the choice to use our rain tires was a 50/50 proposition at best.  Waiting until the last possible moment, we elected to run the race tires, hoping that the skies would clear and that the line would come to us. 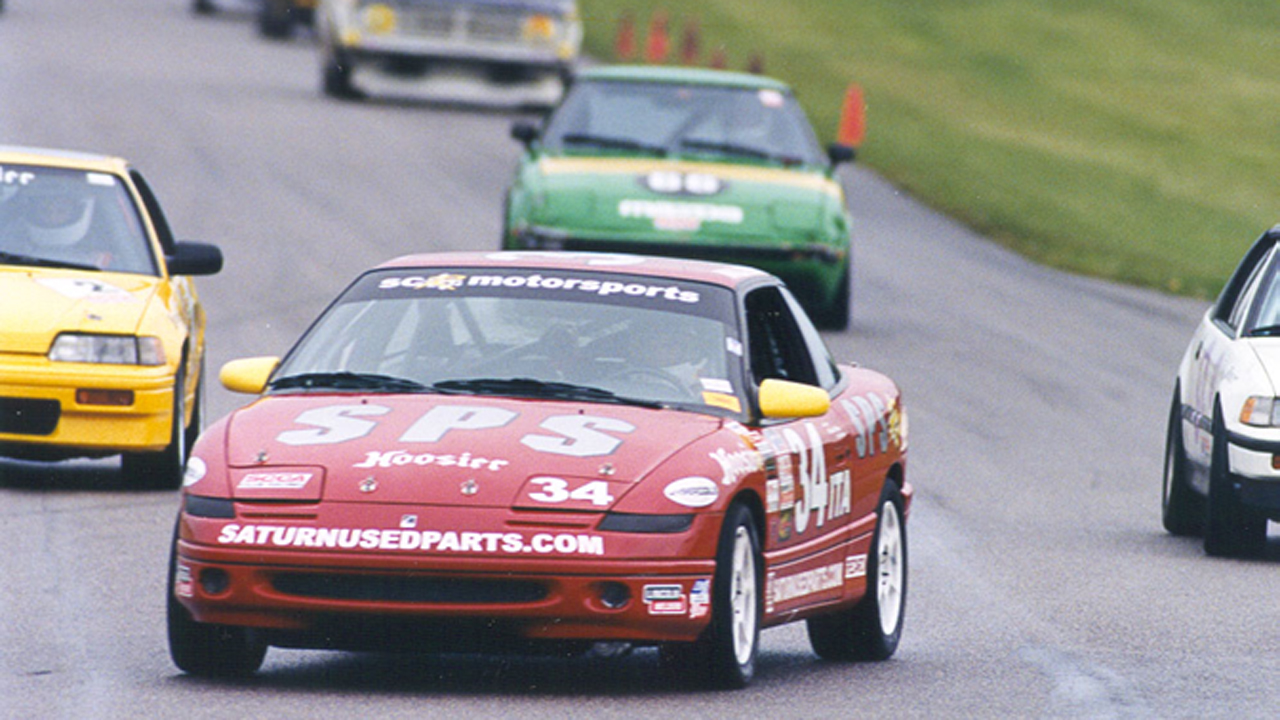 Evidently, we made the same decision as all of the top teams on the grid, as we all came running race rubber.  Drops gathered on the windshield as the 1-minute warning was given and we headed out to the wet racing surface.

Two pace laps later and we were flying toward turn one in a sea of tire spray. Being at the front, things didn’t look too bad, but behind us, cars were scattering.  We pulled out in front through the first two corners and put down the power.  Although short-lived, our lead would continue for two more laps.

On lap 3, a Honda CRX made a wild pass on the outside of turn 2 and began to run away as the rain fell harder.  Every corner was a delicate balance of speed, power, and steering as the stiff race suspension left no room for error.  By lap 5 yet another CRX (this one on semi-rain tires) made a pass in turn 3 and made it stick.  Fortunately, everyone was aware of the treacherous conditions and kept the cars from playing tag with one another, but we had lost 2 places with the race only 50% complete.  Damn the rain!

With 6 laps to go the rain subsided and the car began to stick.  We gradually chipped away at the second CRX’s 8-second advantage, but at the checkered flag we were 2 seconds short of making the position, and more than 20 seconds off the race winner.  We pulled off the track tired, wet, and ready for a regrouping.  The brakes were still pulsating like mad and the pole position start had eroded to a third-place finish, but we found consolation in our podium efforts.  We left the track knowing that Sunday we would need to kick it up a level if we were to have a shot at the number one spot.

Sunday morning brought with it more rain, but this time it was falling hard enough to form standing puddles across the racing surface.  At last we had an easy tire decision – break out the rains!

It had been almost two years since we had last used our rain set-up, but the Hoosier Dirt Stocker tires were bolted in place and we headed toward the grid.  The rain refused to let up as we took to the track.  Let the games begin!

By turn 1 we realized that the brake pulsation which had cursed us on Saturday was completely gone – the result (at least we theorize) of swapping out front rotors and pads Saturday night.  By turn 2 we realized that the Dirt Stockers kicked butt in the rain.  We ran harder and harder and harder as the session unfolded – passing 4-5 cars every lap even though the entire field was on rain tires as well.  By the middle of the session we found ourselves passing some cars for even a second time.  In fact, we caught and passed every single car on the track.  This was viewed as a good thing.

When the grid was posted, our expectations were met – not only had we qualified on the pole – and first overall – but the next closest ITA car was 1.9 seconds back, and the third-place car an amazing 6.9 seconds off our pace!  At this point, one of the drivers huddled around the preliminary grid posting was heard to mutter “that Saturn opened up a can of whoop-ass, didn’t it?”  I guess you could say we did.  Now, if it would only continue to rain for the race…

As luck would have it, the rain slowly began to leave town after our session, and by the time our race group came to the grid, the line was all but dry.  Race tires were the obvious choice, but the start would prove to be interesting – the rain has a tendency to scatter the cars on the grid and there were two ITB Volvos right behind us.  We knew that the race to the first corner would be of utmost importance.

Since we were on the pole overall, I elected to run the grid toward the starter’s stand at a crawl – 5000 RPM in 2nd gear.  The CRX to our left kept trying to turn up the pace, but we held our ground until the starter’s left shoulder dropped and the green was unfurled.  Here we go!

The drag race to turn 1 was a dead heat – 2nd gear, 3rd gear, 4th gear…the CRX and the Saturn went neck and neck into the turn, neither holding an advantage.  Unfortunately, the CRX was able to carry more speed through the turn as he was on the outside and pulled a slight advantage as we headed toward turn 2.  Not wanting to slow down the chase, we tucked in behind and hung on his tail through the ensuing series of corners.  The last thing we needed was to slow us both down and let the 3rd and 4th place cars catch up! 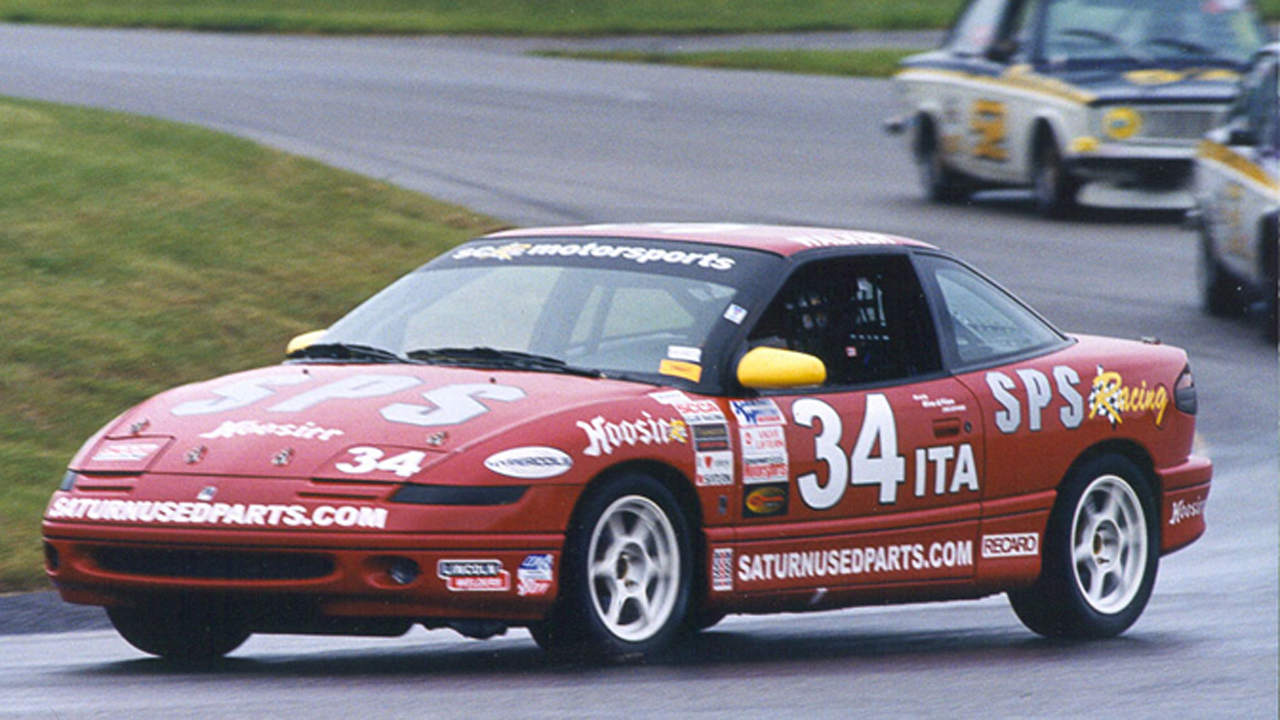 As it turned out, those fears were ill-founded.  For the next 8 laps we ran nose-to-tail with the CRX, distancing ourselves from the rest of the pack.  By lap 9 we had a 10-second lead over the 3rd place car and continued to pull away.  On several occasions, we managed to pull up alongside the CRX and mount challenge after challenge, but each went unfulfilled. For being so small, those little cars are tough to get around!

By lap 13 our 10-second lead over the third-place car had grown to 20 seconds and the battle intensified.  Twice going into the Bowl (turn 8) we pulled up alongside the CRX only to have him cut down on us and block our pass.  Lapped traffic began to play a factor too as the two of us began to slice through the back half of the field.  This was not going to be easy.

By the time the 1-lap-to-go sign was given, we had but one chance left to make a run at the win, but again lapped traffic prevented us from making a legitimate charge for the top podium spot.  After 30 miles of door-to-door action we crossed the finish line 1.4 seconds behind the CRX, but oh, what a race.  Our next closest competitor was more than half of a full lap behind us.

Although our best shot at our first win fell 1.4 seconds short of materializing, we headed for home with an impressive list of accomplishments – two pole positions, two podium finishes, and a new personal best lap time of 1:32.7 set during Sunday’s race.  In light of the ill-handling front end and the still-to-be-developed chassis set-up, we have great expectations for the rest of our 2000 season. 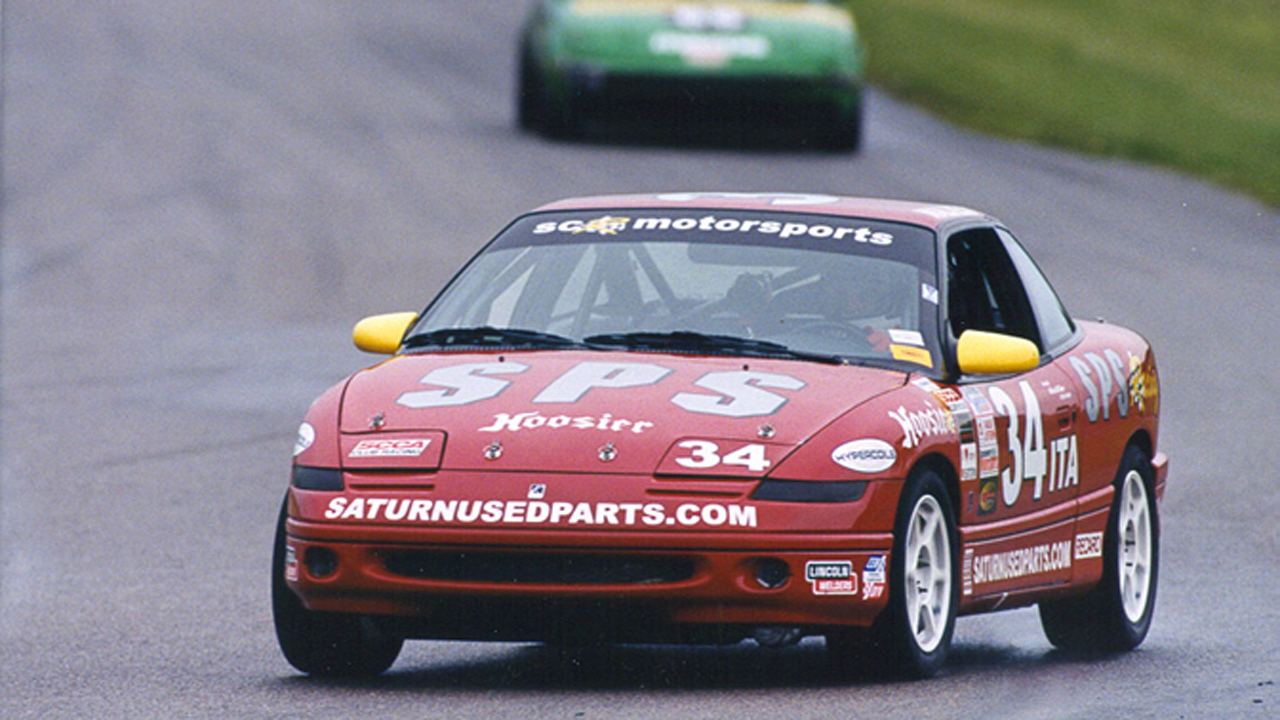 For our next event July 1&2 at Mid-Ohio we anticipate we will have tamed the bushing issue with real-live camber plates, and with some off-weekend development time spent testing and tuning the chassis dynamics, we should have a good handle on the shock, bar, and tire tuning as well.  If all goes as planned, the Hondas should be looking over their shoulder as the race draws near – we’re loading up both barrels for Mid-Ohio.