When we last checked in with team scR, Mark, Steve, and James (yes, they let me help) were busily preparing both the new ITA-spec motor and the big, gaping hole underhood for yet another horsepower infusion.  Well, thanks to the hard work of everyone on the team, we are back in <mechanical> business. 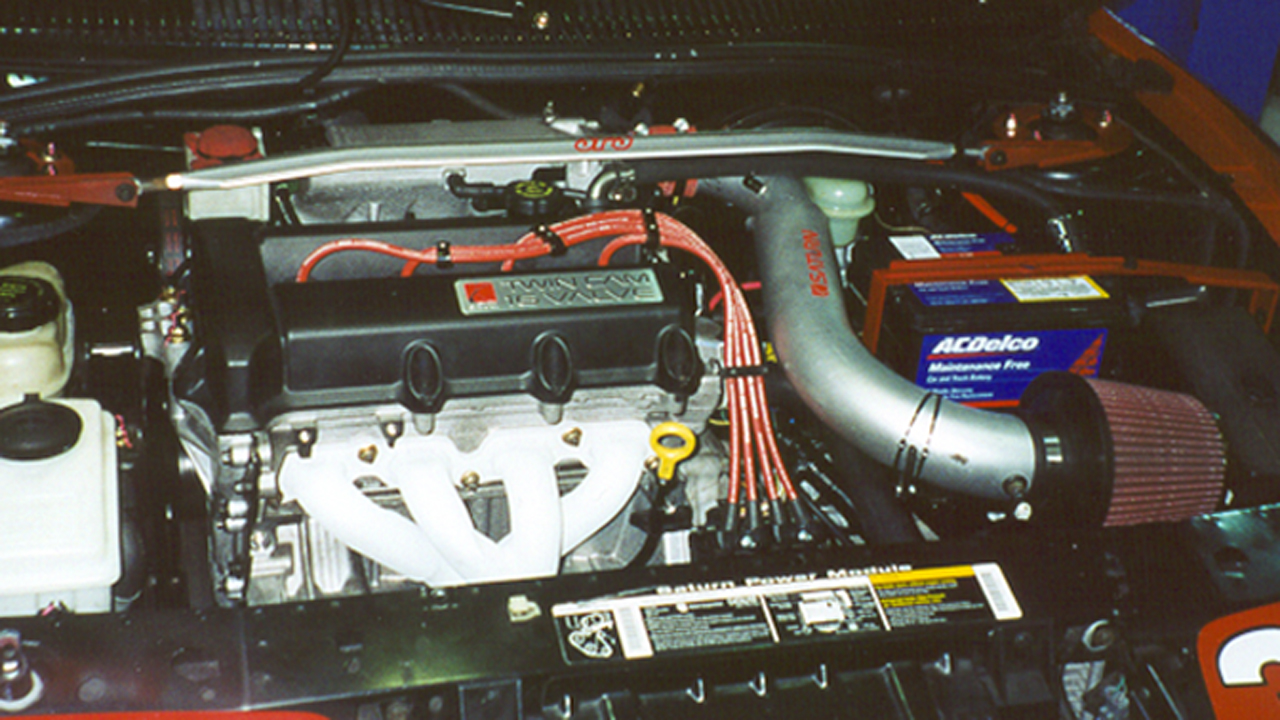 The motor transplant occurred over the weekend of April 1&2.  Fortunately, no surprises were found underhood (the car had been sitting motionless since August when it went POP), and with another 150-horsepower motor finally in place, the whole team was eager and anxious to head to Gingerman for opening day!

Remember how much we love the rain?

As our April 20th test day drew near, countless hours were spent detailing, cleaning, inspecting, and replacing anything and everything we could attack with a wrench.  For the first time in 4 years of road racing, we felt 100% prepared heading into the season!  We were confident that nothing could stand between us and a successful opening day…except the weather, that was.

As the scR caravan pulled into Gingerman on the morning of the 20th, the rain (which had followed us all the way from home) blew in.  Of course, a few lightning cracks and rumblings of thunder were added for good measure, and we spent the next 4 hours huddled under a steel canopy (in a lightning storm, go figure), watching a river flow through the paddock and down the access road.

The highlight of the day came right before noon when the storm apparently took a lunch break and left us with 28 minutes of semi-dry track time.  Tom fired up the car, we pulled to the false grid (avoiding the 6” deep puddles along the way), and #34 took to the track!

Since the car was literally “off the trailer,” the first 8 laps were run well below race pace – short shifting, early breaking, and late apexes galore.  As the line dried out, the speeds increased marginally – but 14 laps after heading out to the track the rain returned and we had to call it a day.

Now, under any other conditions, this would have been considered a complete loss.  However, in that 28-minute window the car ran strong, didn’t make any funny sounds, and didn’t throw parts out from underhood.  In addition, the new instrumentation worked A-OK, the chassis felt solid, and Tom and I got to miss a day of work.  Not bad!  We packed up, hit the road, and set our sights on the season opener – May 6 at Waterford Hills.

Opening day, and what a turnout!  Being our first time at Waterford Hills (a 1.5-mile road course hidden just north of Detroit), we were nearly overwhelmed with the logistics of racing a new car at a new track.  The fact that our paddock space was the size of our living room didn’t help matters much, either.  All of those concerns faded quickly though, as friends and family from near AND far alike converged on the track.  With Pat W. (NY) and Tom M. (MI) sharing the responsibility of crew chief and John C. of SPS (OH) and Eric P. (MI) shoring up the crew list, we were cocked and loaded – bring on the Hondas!

Well, the Hondas did show…and MAN are they quick!  Keeping in mind that this was our first outing at this track, our first time out with the car, and all of those other racer excuses, we were elated with our 4th place qualifying position in a field of 13 cars (6th overall in a field of 23).  With 6 cars within 1 second of our qualifying time, we knew we were in for a good race. 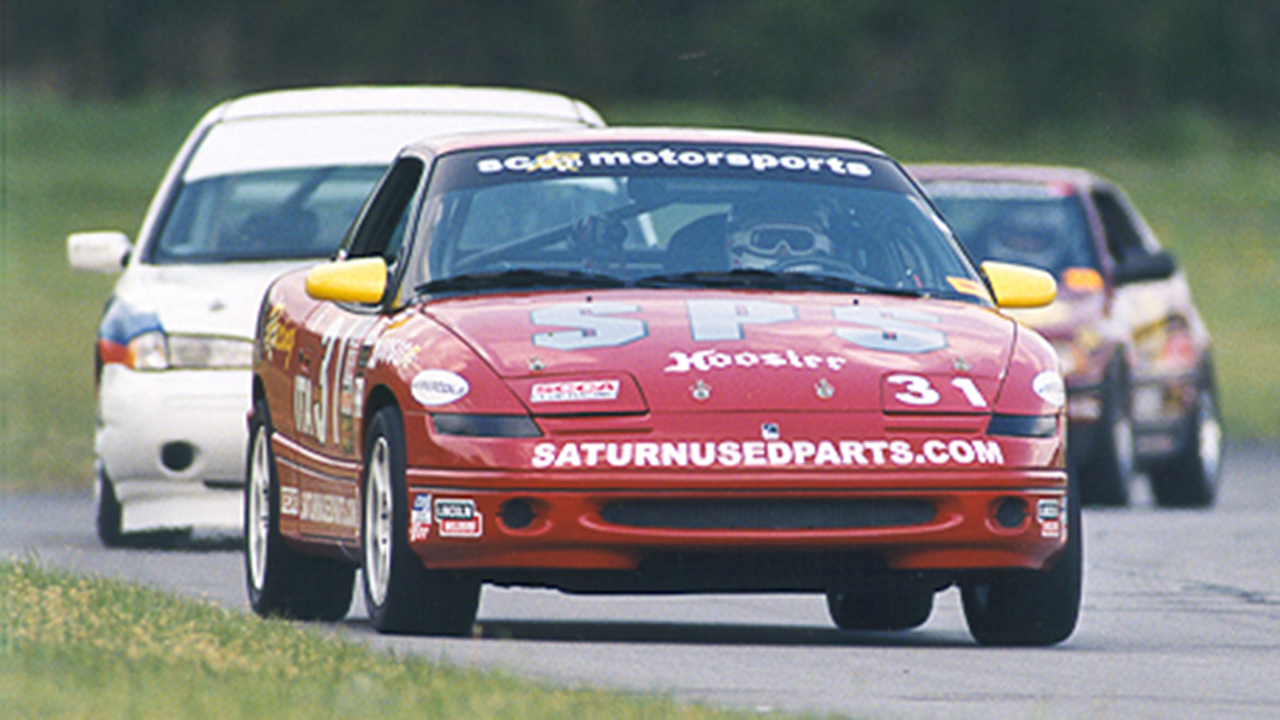 Between Saturday qualifying and Saturday’s race, the crew busily managed and maintained the car – making small changes to the chassis (trying to tame a bouncing suspension), inspecting the underside – and the driver.  We knew we had to go faster to make a real challenge for the Hondas, and the driver was a big part!  Our 1:20.3 lap time just wouldn’t cut it!

And the green flag flies…

Fast forward to the first race of the 2000 season!  Sitting on the false grid, the car began to idle erratically.  Naturally, this was followed by the engine stalling and a general sense of panic from the crew.  AAAHHH!!  Thankfully the car restarted, but refused to idle on its own…I needed to keep my foot on the accelerator pedal to keep it from missing and stalling again.  We all crossed our fingers, toes, and anything else we could find as the 1-minute warning was relayed and we pulled out onto the track.

Fortunately, once on track the engine seemed to run fine – no stalling, missing, or hesitation.  Whew.  The car was coaxed up to 60 on the front straight just to make sure, and yep – all systems were GO!  At least, that was until I hit the brake pedal.  When it rains, it pours, doesn’t it?

Sure enough, each time the brakes were applied, the pedal would vibrate like mad, shaking the driver, the car, and our collective confidence.  Hoping it would “just go away” on its own, I laid on the brakes for the entire pace lap.  While this probably didn’t make the drivers behind us very happy, the problem seemed to fade.  By the time the pace car pulled off and down pit road the scR brake confidence-o-meter was reading about 50%.  Our first race start and questionable brakes.  Damn!

As the green flew the pack accelerated toward turn one sounding like a horde of angry bees.  Because of the brake situation, I intentionally lifted early, allowing two cars by on the inside – but low and behold, the brakes seemed to work OK.  Yahoo – let’s chase those guys down!

The following 10 laps were highlighted by our return to 6th place on lap 8 where we made a 3-wide pass down the back straight (we were stuck in the middle) and made the outbraking move into turn 6 (a video clip of this 20 seconds of excitement will be posted to the website soon).  Thanks, Vaughan!  We held on to the position to finish as we started – 6th overall, but we fell to 5th in class.  While the Hondas had a race of their own up front, we were quite happy with the progress we made…but we had to look at those brakes before Sunday morning!

For Sunday’s first heat race, we had several issues to address.  First, we had to look at the aforementioned brakes.  Second, we needed to re-address the chassis bouncing – it simply got worse on Saturday.  Third, the driver needed to come alive, and fourth, we ran out of Gatorade.  While Tom played with the brakes, John installed “Home Depot” cooling ducts to our brand-new fascia (courtesy of saturnusedparts.com) and Pat ran to get the Gatorade.  Divide and conquer!

This left me to play with the suspension tuning.  With the help and advice of Mark ‘ping-pong’ Rushbrook (still on crutches following his knee surgery), we decided to dial back the front shocks and dial up the rear sway-bar.  Hopefully the combination would allow the front end to settle faster over the rough stuff, allowing us to get back in the power faster.

While the brakes came to life in Sunday’s morning race, the chassis went downhill – and quickly at that.  Our 6th place starting position quickly became 7th, then 8th.  Fortunately, the checkered flag flew before any more positions were compromised.  Something drastic needed to be done for the feature race that afternoon!

After returning to the paddock and running to Dairy Queen for a quick crew pick-me-up (ok, they went on my behalf), we returned to find the race car just as we had left it – bouncy and temperamental.  We figured the only shock setting we hadn’t tried yet was to turn all the shocks all the way up – full hard all the way around.  After all, what did we have to lose? 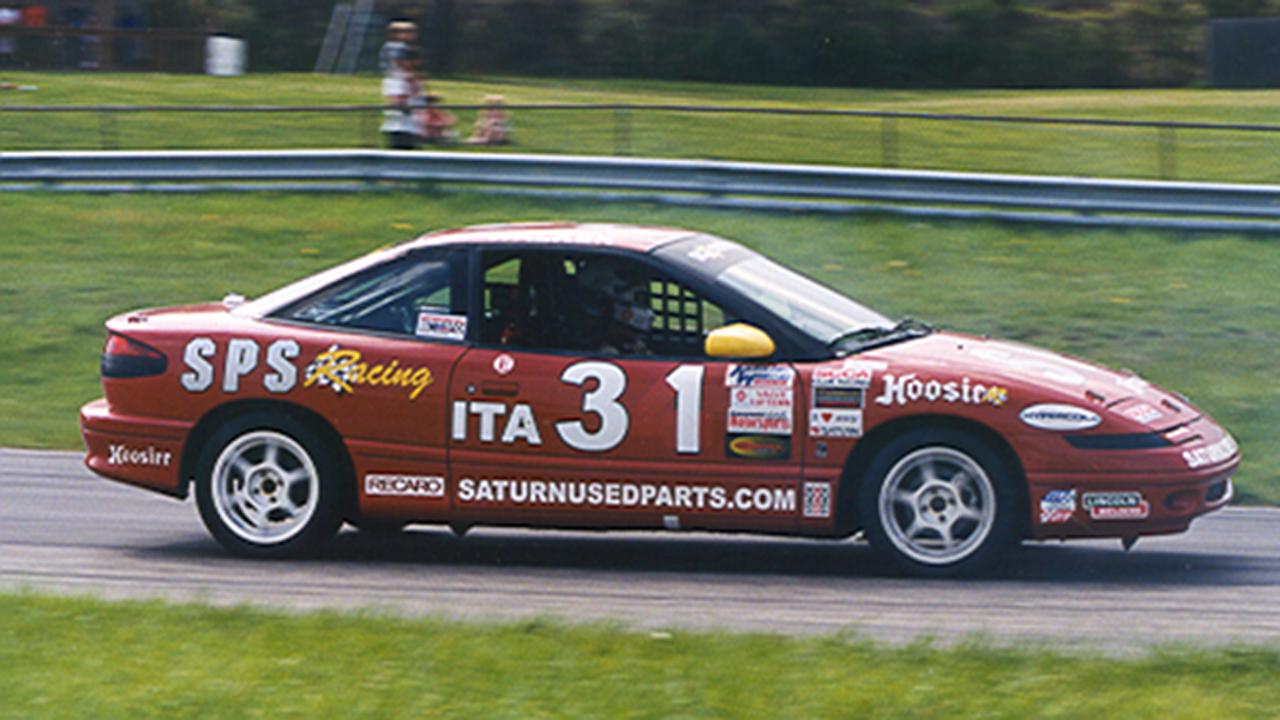 As it turned out, the car responded well to the stiff shocks, but for the wrong reasons.  While the car settled down a bit in the wavy sections it continued to skip around over uneven pavement…but the compromise was definitely the fastest set-up we had run all weekend.  Through hard driving (we turned our fastest lap of the weekend), careful management of lapped traffic, and a good bit of attrition we ran doorhandle to doorhandle with an RX7 across the finish line for 3rd in class and 4th overall (again, check out the video on the website).  Our very first feature race and we brought home the hardware – way to go team!

So, where does this leave us for the Grattan Double on Memorial Day?  Simply put, we need to tame the suspension bushings – with all the spring and shock we are running, the bushings have become the weak link.  Several irons are in the fire, and hopefully we’ll have a solution before our next race!

Oh yeah – we also sprang an oil pan gasket leak, a weeping power steering hose fitting, the motor still won’t idle, and on and on.

While we certainly have our work cut out for us this season, those Hondas might not be that far out there.  Are they catchable? Who knows at this point, but we’re throwing everything we have at them.

Someone had better tell them to keep an eye on the rearview mirror, because we’re just getting started!