Things have been really hopping here at team scR since our last update – race car improvements, driver training, broken parts (!), and more trophies make up just a small part of the list.  With any luck we’ll be able to make it through this newsletter without leaving anything out.  Sit back and take it in!

The team spent Thursday, June 15 with the Saturn Performance Club at Gingerman Raceway.  Because the race car was in for reconstructive surgery at the time (read on), we showed up to the driver’s school in a 2000 Mitsubishi Galant GTZ – my company car (don’t tell anyone at Bosch!).  To make a long story very, very short we managed to keep everyone on track and the smiles wide, but the GTZ just wasn’t up to the task.  Ugh.

The class size was small, the drivers did a great job, and everyone played well together in traffic, but the Mitsu just couldn’t hold the pace.  After driving a 2100-pound IT car, the 3200-pound automatic took some serious effort to muscle around the course.  Of course, most of the time it just went where it wanted to, but we did our best to point it in approximately the right direction.

Fortunately, the sun stayed out for most of the day, and by 3:30 that afternoon we were ready for the flight to Atlanta.  The highway miles back to Detroit in the Mitsu rolled by quickly in eager anticipation of the next day’s activities in Georgia.

After investing heavily in race hardware for the past four years, we decided it was about time to invest a little in the driver too.  After all, without someone pointing the car around the course, there isn’t much that cool-looking race parts can help. Road Atlanta, here we come.

We chose to attend the 3-day Panoz Racing School held at Road Atlanta.  In this way, even if the school itself wasn’t up to our needs, at least we would get significant seat time at the Road Atlanta circuit prior to the ARRC in November.  It was a win-win either way we looked at it. 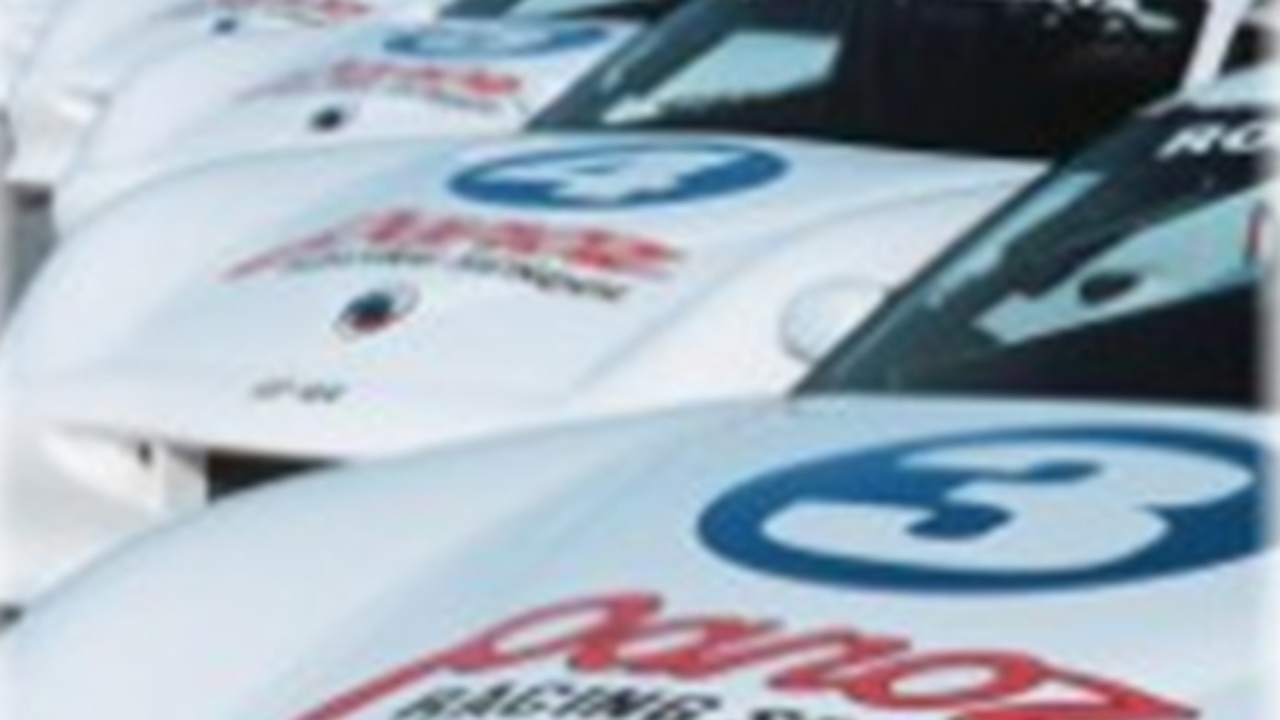 While the course definitely taught us a thing or two, most of the sessions were geared toward “new” drivers…in fact out of the 24 students, only three of us had competition licenses.  By the end of the third day, however, we were running flat out, no rev limiter, and having a blast doing it.  The school cars – while great for the new driver – really had some unique handling characteristics that gave the impression that our IT car would be faster through the twisty stuff but tick slower on the straight sections.  Informal lap times taken during our final session confirmed this – the V8 grunt helped, but the cars just were not as fast through the twisties as #34.

As the plane departed the Atlanta airport on Sunday night, I couldn’t help but wonder if #34 was jealous of me driving all of these other cars at speed.  After all, it was still in surgery.

The Patient is Released!

Upon return to Detroit, our first matter of business was to check on the progress of #34’s front camber plates and rear strut spherical bearing mounts.  This was thought to be the cure for the bob-and-weave handling so pronounced at Waterford and Grattan.  Since this surgery required cutting, welding, and raw fabrication, it was not a trivial task…but the benefits were sure to be worth the pain (and cost!).

Not surprisingly, Scott at Big Sky Motorsports (the same people that did our roll cage construction) outdid himself yet again.  The guy can work magic with anything metal and a welder.  The front camber plates allowed us to set camber without removing the wheels, eliminated the upper rubber mount bushing, and increased our suspension travel by almost one full inch.  The rear mounts did the same, but without the camber adjustability.  Bring on the Hondas! 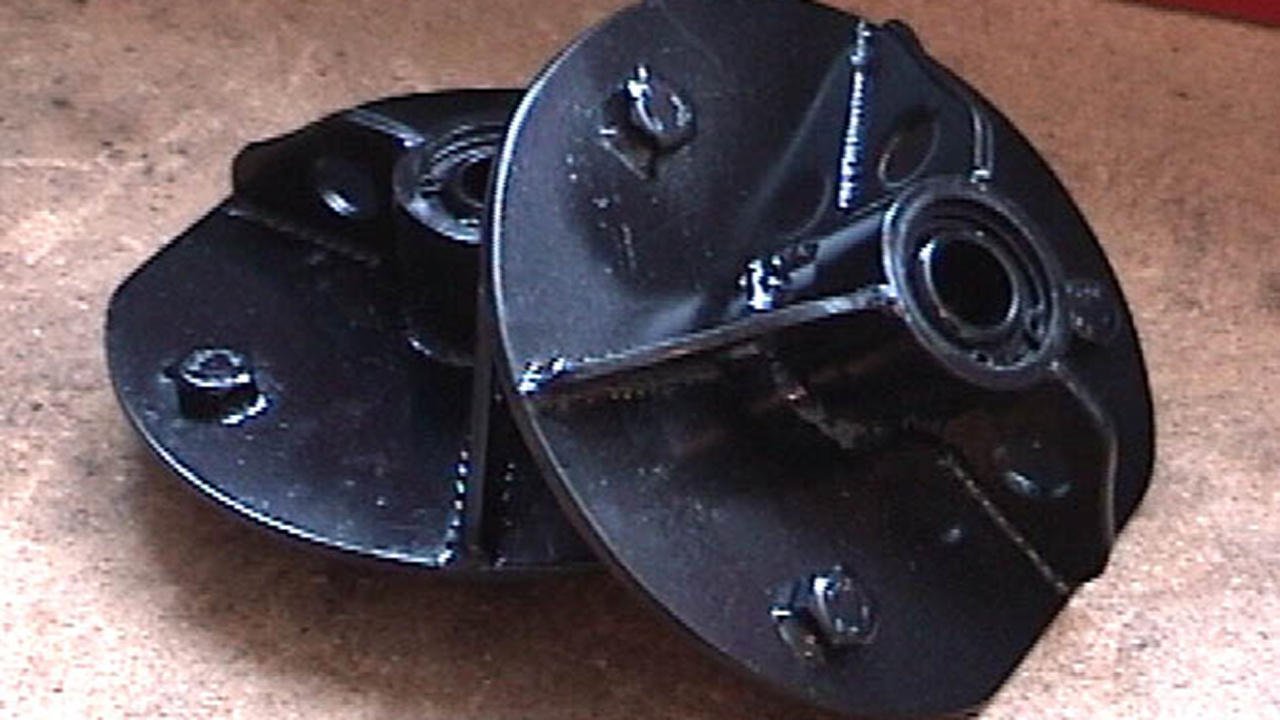 A Slight Change of Schedule

Unfortunately, all of the preceding activities (plus the no-show oil cooler which got lost in the mail) precluded our attendance at Mid-Ohio on the 4th of July.  As this was our second-largest event of the season we were upset, but decided that the long-term goal of building and sorting a car ready for the ARRC in November was the higher priority.  So, instead of putting together a half-baked race car for the 4th, we set our sights on a local Grattan double regional the following weekend.  If nothing else, we were guaranteed to have at least one session in the typical Grattan rain, right?

The field was deep this weekend – the three Honda CRX’s that walked all over us at Waterford during our season opener were in attendance in addition to the usual slew of Toyota MR2’s and Mazda RX7’s.  It was going to be a fight for the podium, let alone the checkered flag!

Guess what…it rained!  True to form, the heavens opened up (not without prolonged indecision first) for both our practice and qualifying sessions Saturday morning.  The good news, however, was that the Dirt Stockers were up to the task, landing team scR a solid 2nd on the grid.  Heck, we even out qualified the car which won the ARRC enduro in 1999.  Since the track was wet, we could not get a good idea of the improvement from the spherical bearing mounts themselves, but the car was smooth and predictable.  Second on this grid was something to be proud of! 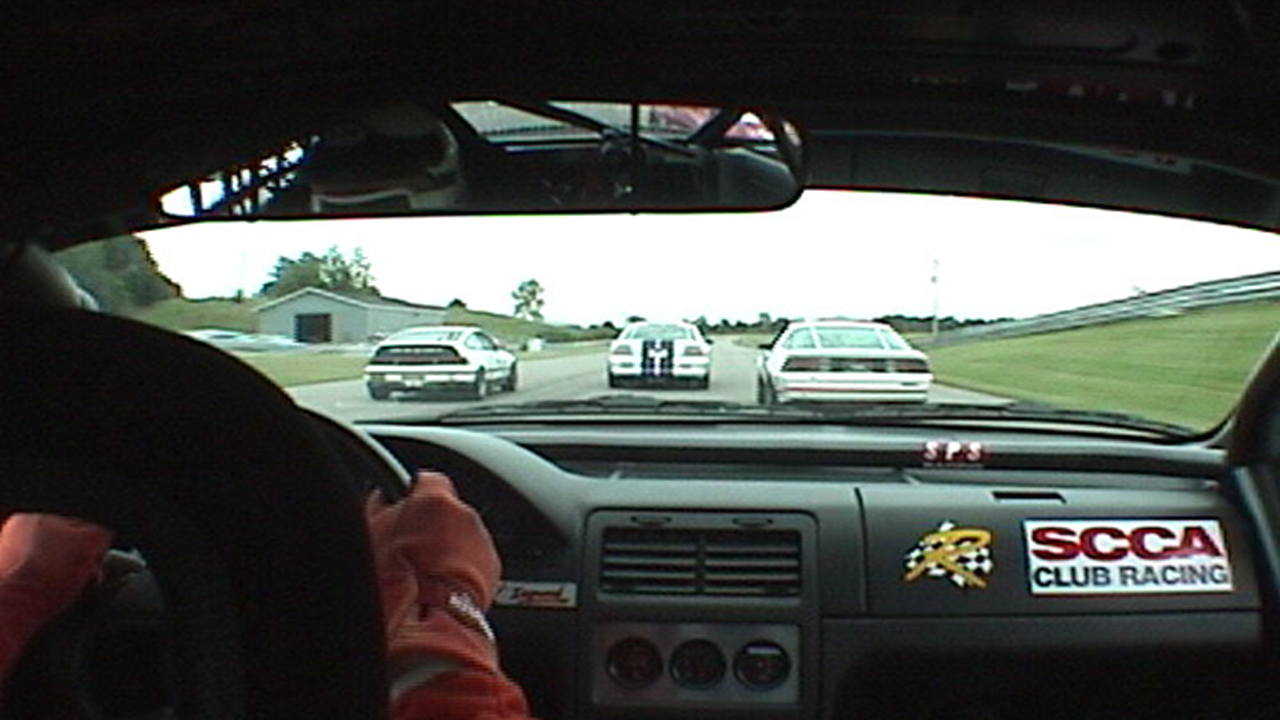 When the green flag dropped for Saturday’s race, all heck (edited for those younger readers) broke loose.  While WE got a great jump on the green, the AS Camaro directly in front of #34 did not. Since it isn’t a great idea to ram a car 1000 pounds heavier that you, we had to lift, letting 4 cars by on either side.  By turn one we had regained two positions, but the traffic mess took about five laps to clear itself out, giving the cars in 1st and 2nd place the chance to run away.  This would not have been so bad, but (minor) tragedy was about to strike.

Coming up into the right-left combo before the front straight the car seemingly on its own pitched itself sideways and across the track.  A quick correction saved the day, but upon entering the front straight the steering wheel was noticed to be off-center and standing on the gas caused the car to randomly change lanes.  Not wanting to risk further excitement the car was pulled to the side of the track and limped back to pit lane at 20 mph.

Inspection on pit lane was frantic.  The crew opened the hood, examined the shocks, and wiggled every suspension part on the front end of the car, only to have a pit lane observer yell, “hey – your back wheel is about to fall off.”

Sure enough, all four lug nuts on the right rear wheel were within a thread of coming off the car, even though the crew was certain that all was in order before the race began.  The wheel, spacer, and hub were destroyed, but somehow the assembly stayed together long enough to limp the car back to the paddock.  As the crew went about replacing the parts, we counted our blessings, as a wheel coming off the car at speed certainly would have been worse than a damaged wheel and a DNF.  Sunday would have to be our day of redemption.

Guess what…it rained again!  The drops came down incessantly for both our practice and qualifying sessions, but one more time the team rose to the soggy occasion and ran a fantastic qualifying session.  Although 4th on the grid for the start of the race, we had run only tenths of a second off the rest of the pack.  The run for the green flag at the start of the race would prove yet again to be of utmost importance.

Unlike Saturday where we lost five positions at the start, on Sunday we only lost three.  (Note to self: we need more motor!)  However, by lap three we had caught car #89 running in third place and began to have one of the best races in scR history!  For seven laps we diced with car #89 on the damp track – two wide through the esses, outbraking into turn one, and sliding sideways over the jump.  On several occasions we were able to put the #34 car in front, but each time our victory was short-lived…those Hondas run!

With about five laps to go our crew told us that the car running in second position had crashed out while lapping traffic, making our battle with #89 a race for the second podium position.  Unfortunately, this was the same lap that yet another new part fell off the race car. 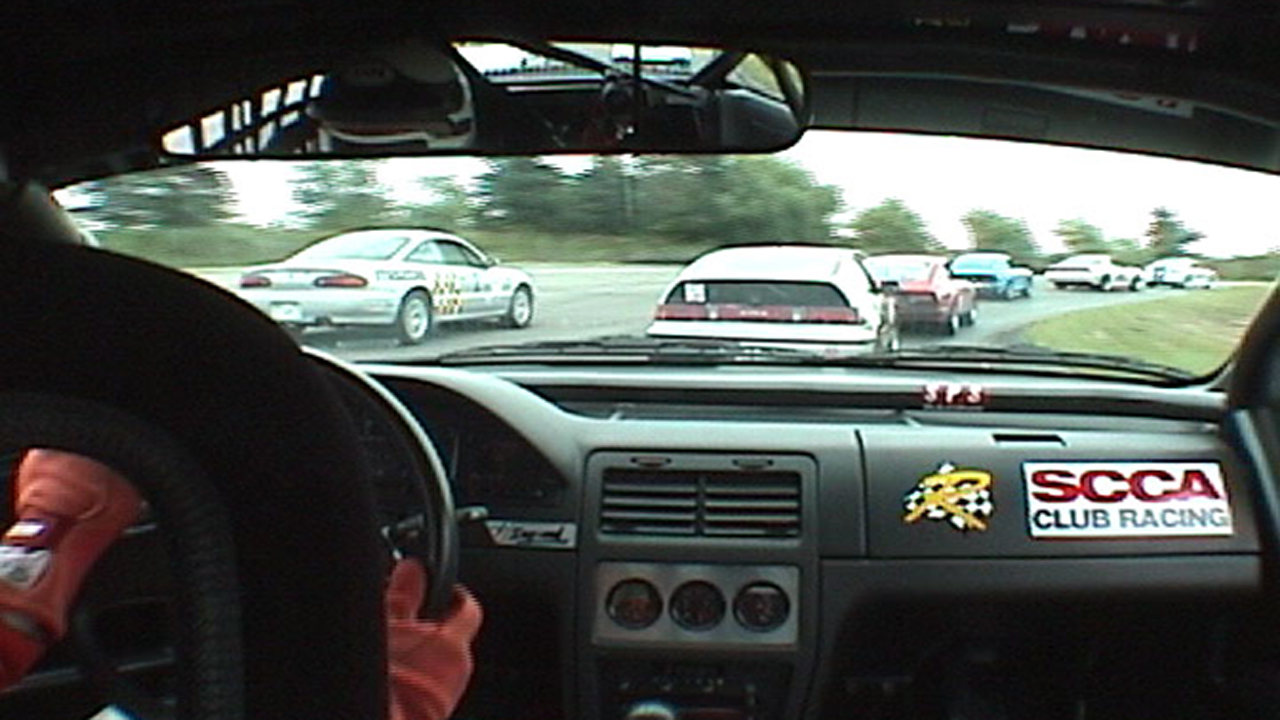 The keyhole at Grattan is the tightest turn on the circuit, yet as it leads to the longest straight, it is the most important.  As the brakes were applied and my right foot rotated toward the accelerator pedal to blip the throttle, the accelerator pad broke off the actuating arm and lodged itself between the arm and the floor.  In English, the gas pedal pad broke off and prevented wide open throttle (WOT) as my foot fell off the brake pedal!

Of course, this little distraction led to the Honda pulling out a five-second advantage as I had to fish around under the dash with both feet trying to remove the broken pieces from behind the arm.  Once the carnage was cleared and WOT became available, we picked up the chase, but the gap would prove to be too large to overcome in the remaining four laps.  In hindsight this was a good thing, as with two laps to go the left front wheel bearing also decided it was done for the afternoon and began to howl, grind, and spew grease all over our nice white wheel.  Fortunately, our lead over the fourth place car was large enough that we could cross the finish line without challenge, but the car was obviously ready for the trailer.  At least we had a trophy for the wall upon our return home.

In preparation for Watkins Glen in two weeks (July 29/30) we have a long “to do” list, but we have every expectation of kicking some tail.  After all, ‘The Glen’ is our old home track.  New bearings, new brakes, an oil cooler, new tires, and a little more weight removal are all planned between now and the event.  Let’s just hope all the parts stay put this time.

Well, it’s official – Mark Rushbrook has ended his waffling and just last week dropped off his gutted black-gold 1995 SC2 to Scott at Big Sky Motorsports for the installation of an scR-spec roll cage.  Looks like before too long there will be a pair of Saturns tearing up the Central Division in ITA!

While building a race car from scratch is not an overnight ordeal, Mark has tentatively planned to hit the track by the end of August…or so.  Looks like in addition to preparing #34 for track duty, we’ll be spending long nights across town giving Mark a hand.  Now we just need to keep him away from the ping-pong table!