Another weekend of ‘firsts’ at IRP

June 4, 1997: “So anyway, I missed that damn shift and smoked the front tires. I let the car go straight off the access road at the right of the turn. No damage done. Take a breath, three-point turn, get back on the track. But not so fast, buddy…the corner workers held me until THE REST OF THE ENTIRE FIELD had passed me. I restarted on lap 10 in 35th place. Dead last overall. Dead last in SSC. (note that at the time I was 13 seconds in front of the second place SSC car – and 15 seconds in front of my instructor in 3rd!)”

IRP is quickly becoming team scR’s nemesis…but first, the requisite crew kudos must be given to Tom, Pat, and first-time crew chief John Comeskey of SPS. Not only does John sell some of the best Saturn performance parts around, he now has a whole new perspective of their strengths and weaknesses. Although we did not end up quite where we had hoped, the car was flawless all weekend long. Thanks, guys.

And now, before the race report, how about a word from our sponsors! As you are aware, team scR has been experimenting with Hoosier tires for all of 1998 with great success – notice how the white duct tape on the fender has been replaced with a real, live Hoosier sticker! The tires really seem to work well with the car, and the Hoosier guys have been watching. For the rest of the season, we will be working with Hoosier developing a tire for the Showroom Stock Saturn which will allow us to run with – and in front of – the rest of the SSC field.

And now, before the race report, how about a radio report! The week prior to the race, I finally broke down and decided to invest in radios for the car and crew chief. Since we had a contingency prize gift certificate from Racetech (yea! June Sprints!), it just made sense to order from them. Part of the deal was that my helmet needed to be sent to Texas for wiring and microphone installation. No problem, they said – if it was sent out red label by Tuesday AM, they could return it red label by Friday PM for the race at IRP. Monday afternoon I placed the order and headed for the Post Office.

Sitting at home on Tuesday morning, I began to daydream about using the radios triumphantly as the green flag was waving in the distance, the crew calling the news in as we pulled away from the pack at the start of the race. My daydreaming was interrupted by a knock at the front door.

“Hello. I have a red label package for Mr. Walker. Please sign here.”

Seems that I got the ‘To’ and the ‘From’ on the shipping label backward. 22 hours and $25 later, I had my helmet shipped right back to my very own doorstep. The Post Office is so efficient. Needless to say, we did not get the radios in time for the race and I had to use my backup helmet for the weekend…

So, back to the race.

As a point of interest for those Saturn fans in the audience, the only other SSC Saturn in the country was also at IRP for the race. Mike Kramer and his crew from Spring Hill were coming off a spectacular double National win at Savannah, and made it a point to share stories and race strategies all weekend. It sure was great to see another SC2 on the track! We were even more excited, however, to have qualified only 0.01 seconds off Mike’s best qualifying time – his 1:57.43 had him directly in front of us – 7th on the grid! 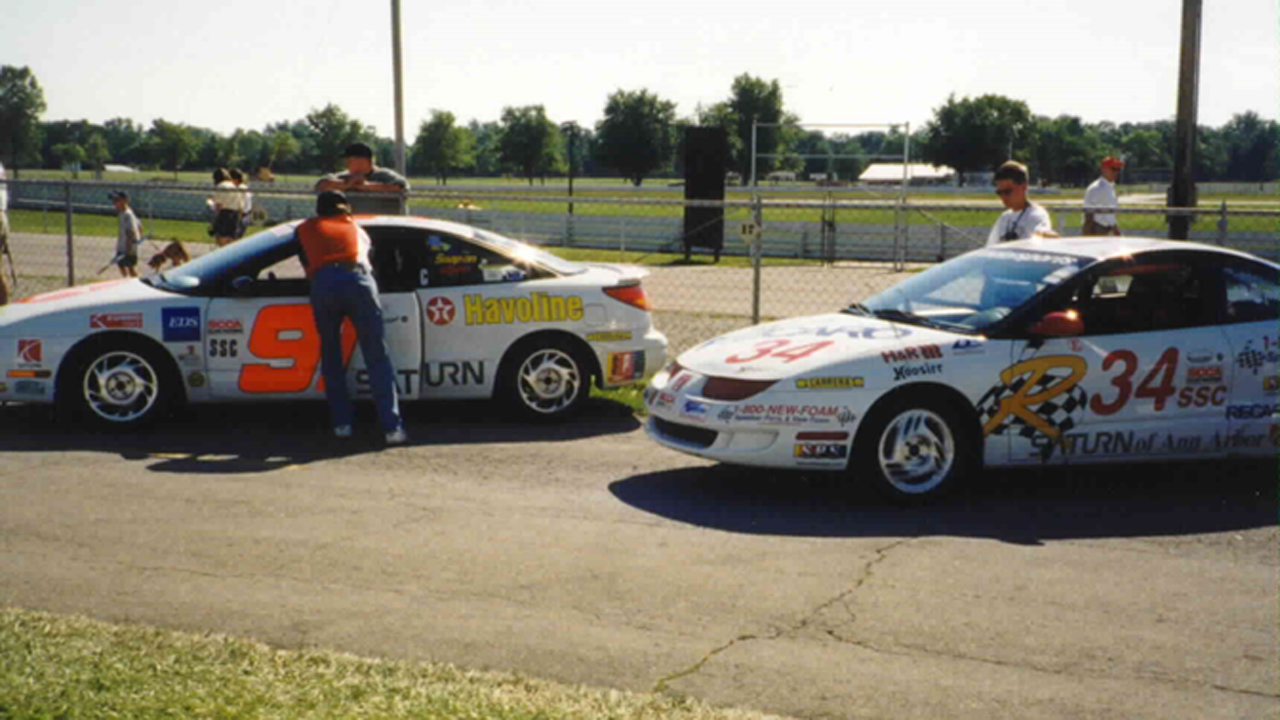 Because of the LONG front straight at IRP, we were pretty sure that seeing the green flag would not be a big deal, but with so many SSC cars in front of us, we knew turn 1 would be a challenge. Coming out of turn 15 on the pace lap, both Mike and I just plain hopped on it. Yea, it was really early, but as we shot ahead of the rest of the pack and saw the green flying in spite of it all, it sure felt good to be on the leading edge of the starting pack! I drafted Mike past the starter stand and past 2 other cars before getting to turn 1. 5th place!

Now the newsletter ends abruptly. There are several theories about what really happened next, like 1) the brakes were cold 2) the tires were cold 3) the track was slippery, but, most likely 4) the driver was cold.

Turn 1 is taken in an SSC Saturn at about 110 MPH. A very fast right hand turn. I ended up going wide – too wide – and off the edge of the track, spinning wildly through the grassy run-off area to a complete stop. All would have been well, except that in going off the track, I managed to punt a plastic cone – an autocrossing pylon at the edge of the track if you will. At 110, cones hurt.

The base of the cone went up and under the car, breaking the plastic splash guard, shattering the plastic bumper support beam, and finally, tearing through the lower radiator fins. The radiator damage proved to be fatal, as 2 gallons of Dextron II are now acting as fertilizer outside turn 1. One competition lap. Game over. Our first DNF.

In retrospect, although we came away disappointed with our results, things could have been worse. After crewing for Ken two weeks ago – and seeing what turn 1 at Mid-Ohio can do to an GTI (photo below) – we walked away from our 110 MPH incident with nothing to complain about. 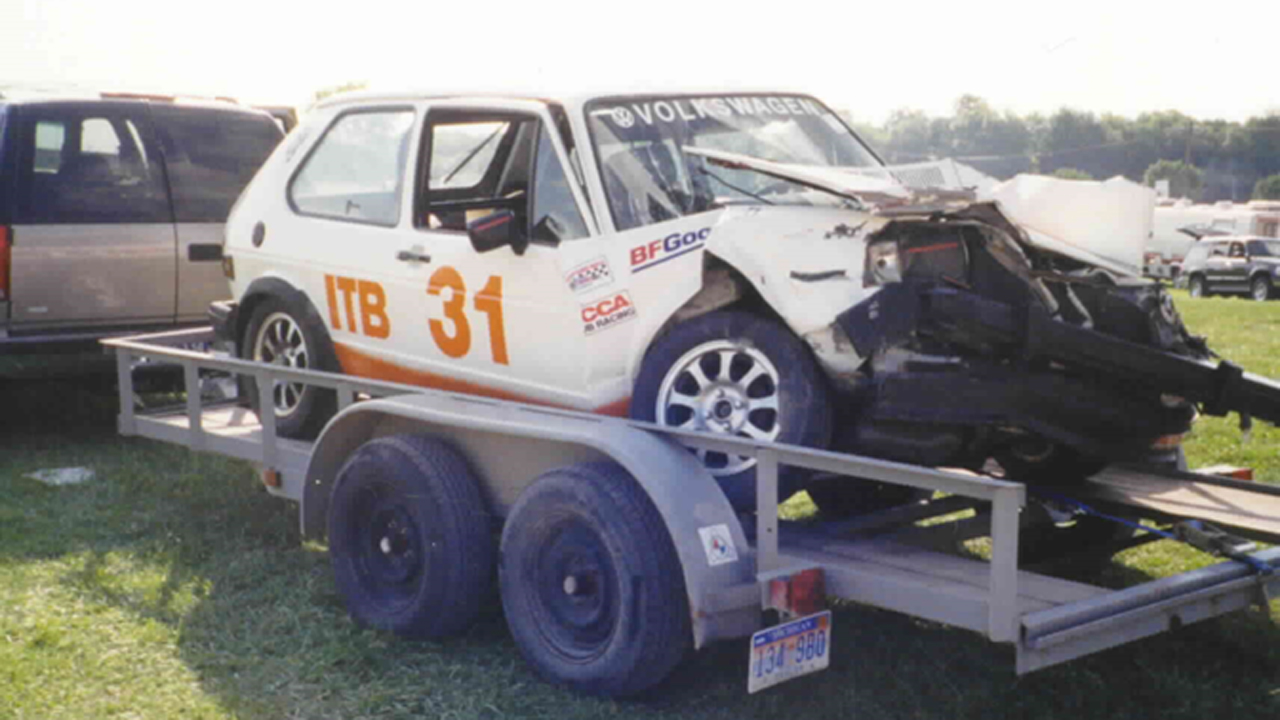 We already have the car repaired and ready for Road America next weekend (thanks Steve and Walt!), but next time, IRP is ours – and this time, it’s personal!