Coming off of a dismal outing at IRP, team scR was loaded and ready for Road America – the radiator was replaced, the front fascia was repaired, and the cooler was full of Strawberry Kiwi Gatorade. It would prove to be a rewarding weekend! As usual, the crew consisted of Pat and Dana, but we were joined by first-timer Lane from Wisconsin. Flawless execution was their calling card all weekend long. 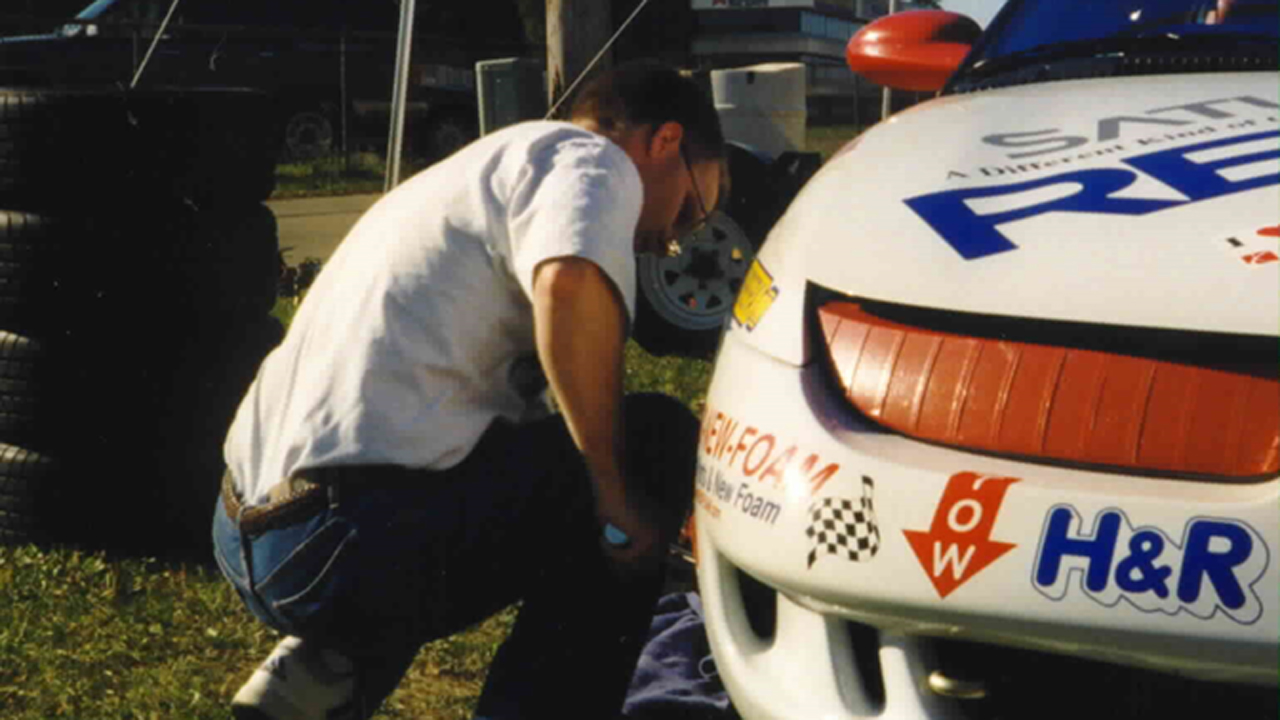 Practice on Saturday morning was the first time the car had been run since the unfortunate ‘cone incident’ at IRP. Driving the car up to the grid, Lane noted that the brake pedal felt a little low, but we wrote it off to worn linings – after all, we had just missed the 5-minute warning!

By turn 2, I had to agree with Lane – the brakes were erratic at best. It just so happened that when the pedal was pressed, the brakes would sometimes work really, really well, and other times, well…there was not much to write home about. (Driver’s editorial: this might just explain the ‘cone incident’ at IRP as well, but the crew still insists on blaming the driver – oh well.) After running 2:57’s at the June Sprints, we were turning solid 3:00’s. The brakes were that unpredictable. 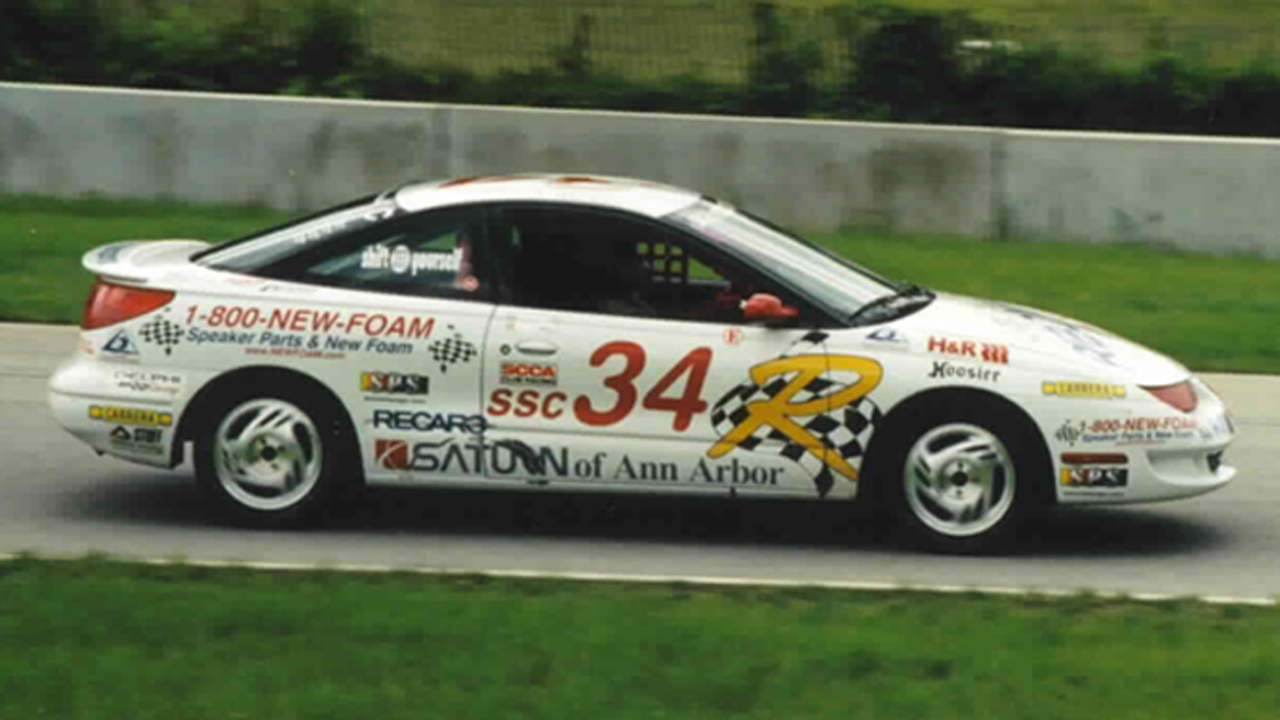 Following a thorough inspection back in the pits, we discovered that the left front caliper seemed to be over-retracting during our brake fluid bleeding. Fortunately, we had a spare caliper in the truck, and 15 minutes later the car was sporting a new piece. As we headed to the grid for qualifying, we hoped that the gremlin had been caught in the act.

When the grid sheet was finalized, the team scR cheers could be heard for miles! We had officially posted a best time of a 2:54.3, lowering our personal best of 2:56.5 by 2.2 seconds, but better yet, beating the official track record for SSC! The only hitch was that another SSC car had gone 0.1 seconds faster yet, so no Pole Position for team scR, but we were sitting second on the grid out of 14 SSC cars. We had even out qualified 7 of the 9 SSB cars…

Strategizing for the race on Sunday, we were most concerned about the start. Since we had 7 SSB cars behind us, and since the front straight is uphill (read here: vertical), and since we consistently have the least horsepower of the cars in SSC, we knew we were facing an uphill battle (pun intended). At least we were equipped with our brand-new two-way radios and would not miss the green flag!

As it turned out, the radios were not really needed, since we were all racing coming out of turn 14 toward the starter stand anyhow. We were on the gas right with everyone else, but the SSB Neon right behind us began to push us up the hill. Extra horsepower! Going up the front straight, 2 SSC cars just pulled out to the right and walked by us like we had missed a gear or two. Those Neons may not handle well, but they do have some low-end grunt. By turn 1 we had fallen to 4th in SSC and had been passed by an SSB car on top of it – all because of the horsepower deficit.

For 6 laps we managed to run right on top of the third place SSC car, with the race leaders only 5-6 seconds in front of us. Each time we would try for the pass – and sometimes after completing the pass – the Neon would pull right on by down the straight. Because the three straights are so long at Road America, ‘getting in the way’ doesn’t do much to discourage the opposition. The highlight of the whole race came on lap 5 as we ran 3-wide down the entire front straight – 115 MPH with our right-hand mirror dragging on the concrete pit wall. Although we made the pass under braking at the end of the straight (yea!), we could not hold on down the following ‘dragstrip’. 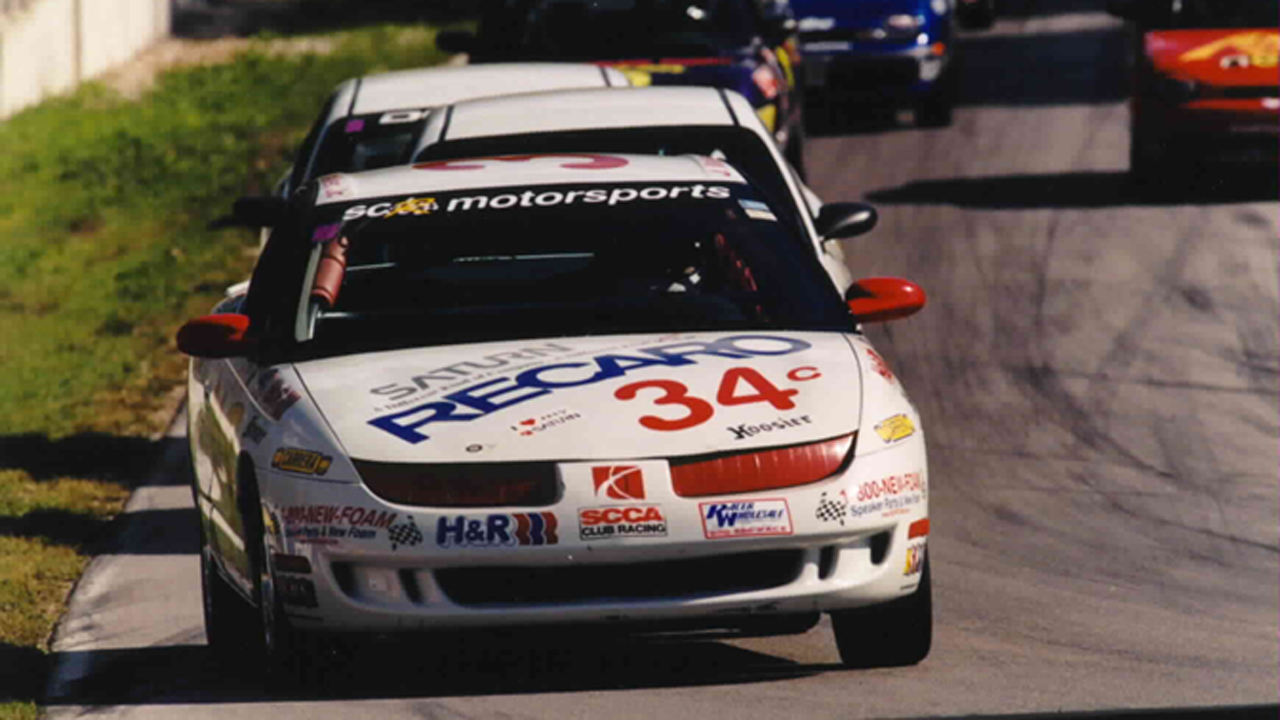 By lap 7, the two Neons in front of us had started to bump draft each other, leaving us out to dry. We continued to run consistent 2:55’s, but without the benefit of the draft, they continued to s-l-o-w-l-y pull away. For the remaining 5 laps, we ran solo trying to regain any lost ground, but just didn’t have the power to chase them down the straights.

With 1 lap to go, a Honda Civic appeared out of nowhere and just smoked us on the front straight. As he went by, I waved, but couldn’t do much else.

And that, ladies and gentlemen, is how we finished – 5th out of 14. The race winners were only about 8 seconds in front of us at the finish – we could see them for the whole race, and the smoking Civic ended up in 4th, but also set the fastest lap of the race AND reset the track record with a 2:54.0. Our best lap of a 2:55.1 was only 0.6 seconds off the race winner’s best, but over the course of 12 laps, it added up.

So, going in to Grattan this weekend, we have high expectations. Both Grattan and Mid-Ohio – our last 2 events of the regular season – are small, tight, technical tracks without the long straights which give Road America the nickname ‘4 miles of black lightning’. Based on our great cornering speed and resolved brake issues, we believe that we have the hardware to put our SC2 right up toward the front at both of these events. The competition, however, is expected to be stiff, as these are the last 2 chances to get points for the Runoffs. We will have to stay focused and error-free to come out in front! 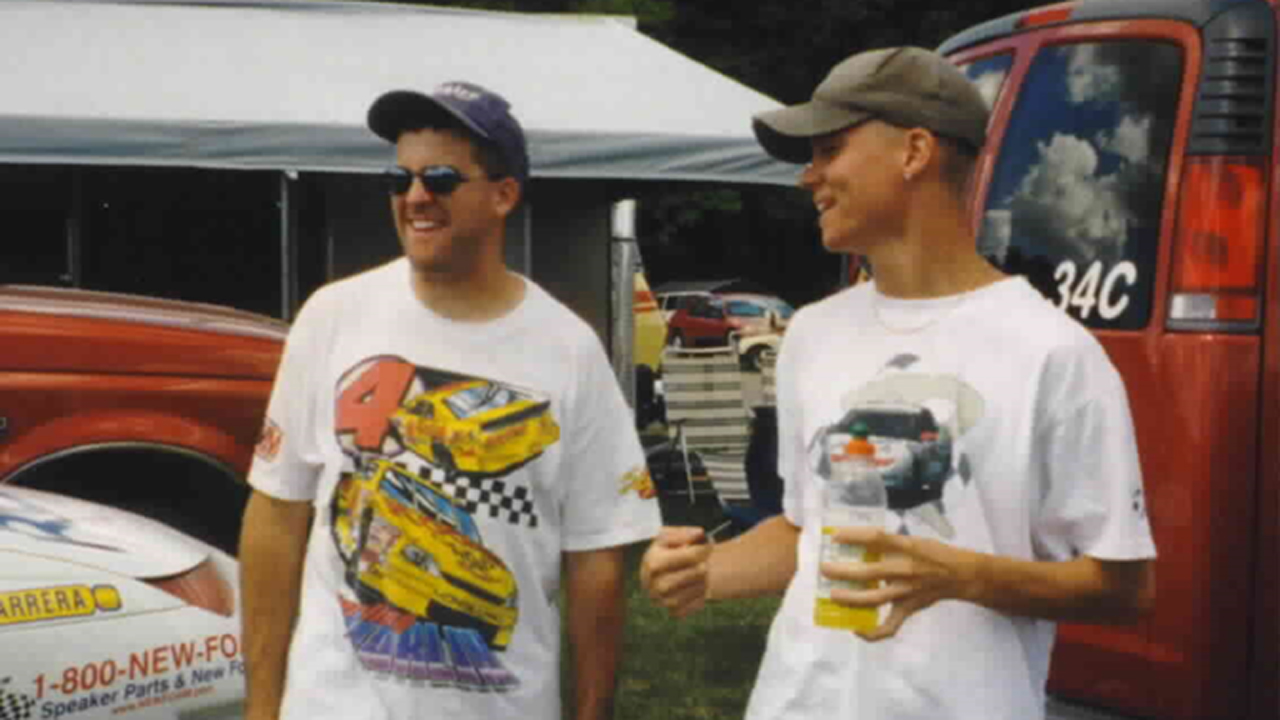 See you at the track…