The June Sprints at Road America

Hey, get this – we have real-time pictures from this race right here in the newsletter!  Thanks, Lane, for your unselfish giving of time, incredible speed, and bottomless talent.  I hope it was all worth your new team scR T-shirt!

The June Sprints, held every year at Road America, is billed by some as the second-largest SCCA Club Racing event of the year – second only to the National Championship in October!  At Watkins Glen two weeks earlier, we overheard several of the other SSC drivers commenting in the paddock how “you don’t go to the June Sprints hoping to get points.”

Well, foolishly enough, we went hoping to get points.  ‘We’ consisted of veteran crew members Dana W. and John T., newcomer Bill D., and first-time crew chief Pat W.  Please bear in mind that we had never before traveled to Road America, let alone raced there.  We knew that in order to be successful, we would need to get up to speed (no pun intended) fast. 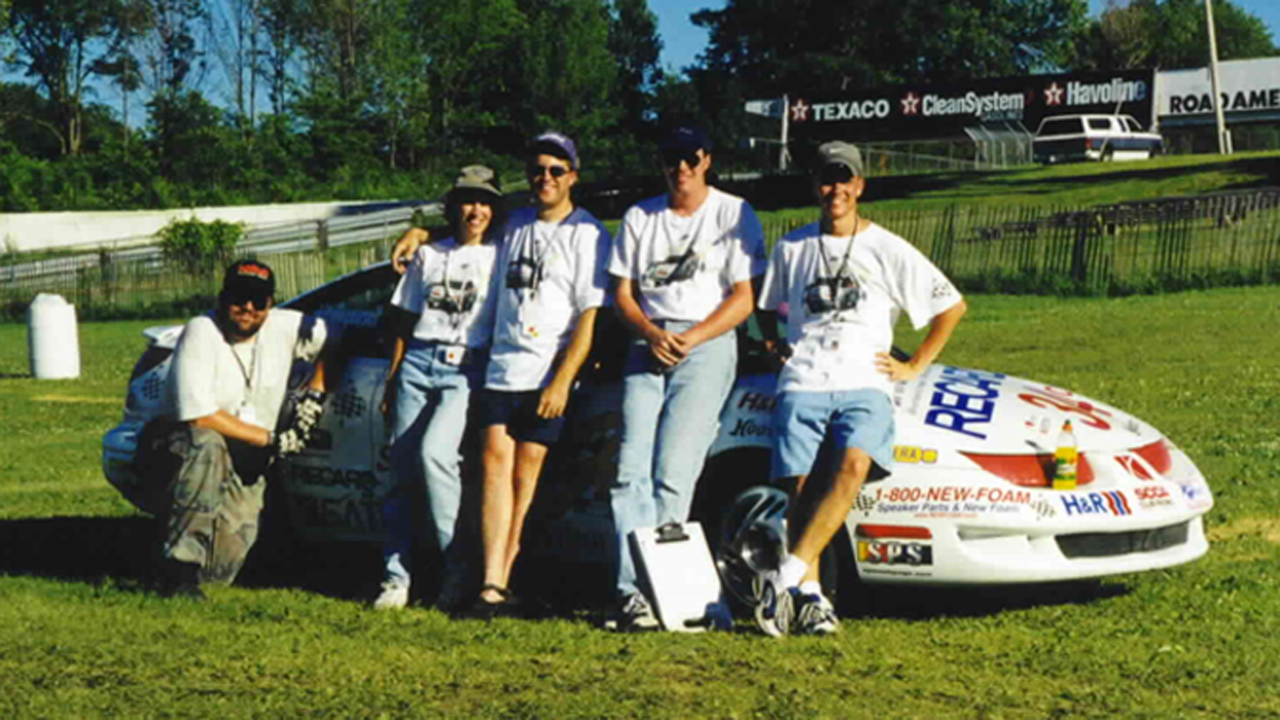 During the trip to the track on Thursday, Pat reviewed in detail all that there was to know about running the scR show on race day.  To his credit, the entire weekend ran without a single hitch.  Well, at least without a MAJOR hitch.

Road America is a BIG road course – 4 miles long.  In our first practice session on Friday, we only managed to get in 7 laps in 25 minutes, posting a best time of a 3:00.5.  Over three minutes!  Not knowing what a ‘good’ SSC time was, we were content to see that our times were falling each lap.  Evidently, the driver was learning and the car was responding.  We packed up and headed back to the hotel eager to take to the track for qualifying on Saturday morning.

Friday night was peaceful until the tornado struck at 4AM.  We never saw the twister, but the Weather Channel informed us that there was a 60% chance of thunderstorms for the rest of the weekend.  Typical.  We went back to sleep not knowing what the dawn would bring.

Somehow, by the time we did get to the track on Saturday, all traces of rain had disappeared and the beautiful blue skies were only sparsely covered with clouds.  With the dry tires on the car, the crew brought the machine up to the grid and waited patiently for the driver to appear.

While sitting on the grid, another SSC competitor wandered over and began to inform us that HE was running low 2:58’s, and that GOOD drivers (by his definition, we suppose) would be turning 2:53’s.  Hmmm.  Our 3:00’s were a far cry from mid-50’s.  However, he graciously offered to let us “follow him around for a few laps to see where the best line would be.”  No problem – we’ll follow. 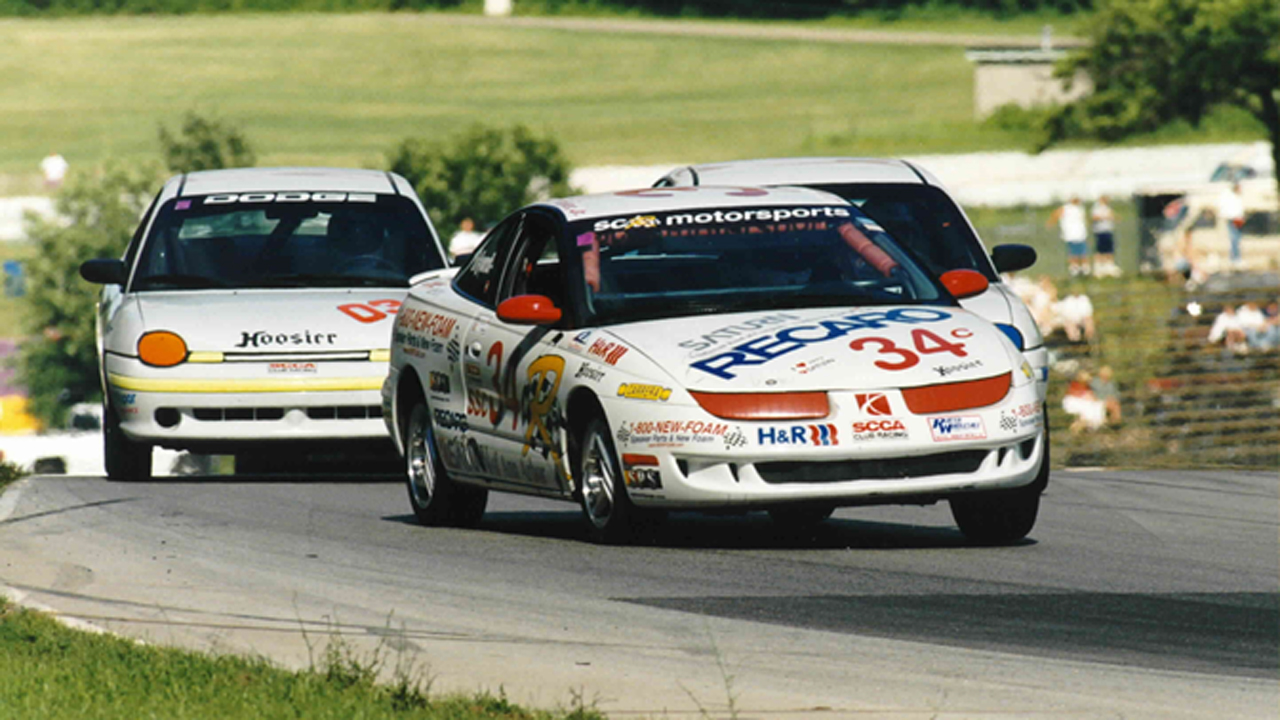 Well, after 2 laps of ‘following’ our self-acknowledged Road America instructor, we decided to pass him in turn 1.  We never saw him again.  In addition, with only 9 cars in SSC, we were not too surprised that we did not see another SSC car during our qualifying session, but did not think that it was a result of our being quicker than the rest of the field.  We just thought our ‘instructor’ might have been having mechanical problems.

When the times for qualifying session 1 were posted, we were in relative disbelief – we were second on the grid behind #49, last year’s National Championship pole sitter!  Even though we were 1.6 seconds off his pace, we were very happy with our 2:58.5!  Guess we picked something up from the day before.

Saturday night the second tornado hit.  Again, the Weather Channel was predicting thunderstorms for Sunday.  This time, it looked bad.

Arriving at the track Sunday morning, we feared our luck had been exhausted, for again we were greeted with clear skies and sunshine.  Something was bound to go wrong, and with one qualifying session and the race to follow, we were more than cautious in all of our preparations.

The perfect conditions continued through our second qualifying session.  This time, we followed the #49 car for the first half of the session.  There is really no better way to learn to drive a racetrack than to follow a fast driver through the corners.  It became readily apparent just where he was making up the extra time, and we adjusted our line to compensate.  Apparently, it worked, for when the final grid sheet was posted later in the afternoon, we had outrun #49’s first qualifying effort by 0.4 seconds.  We managed to pull off a 2:56.6! 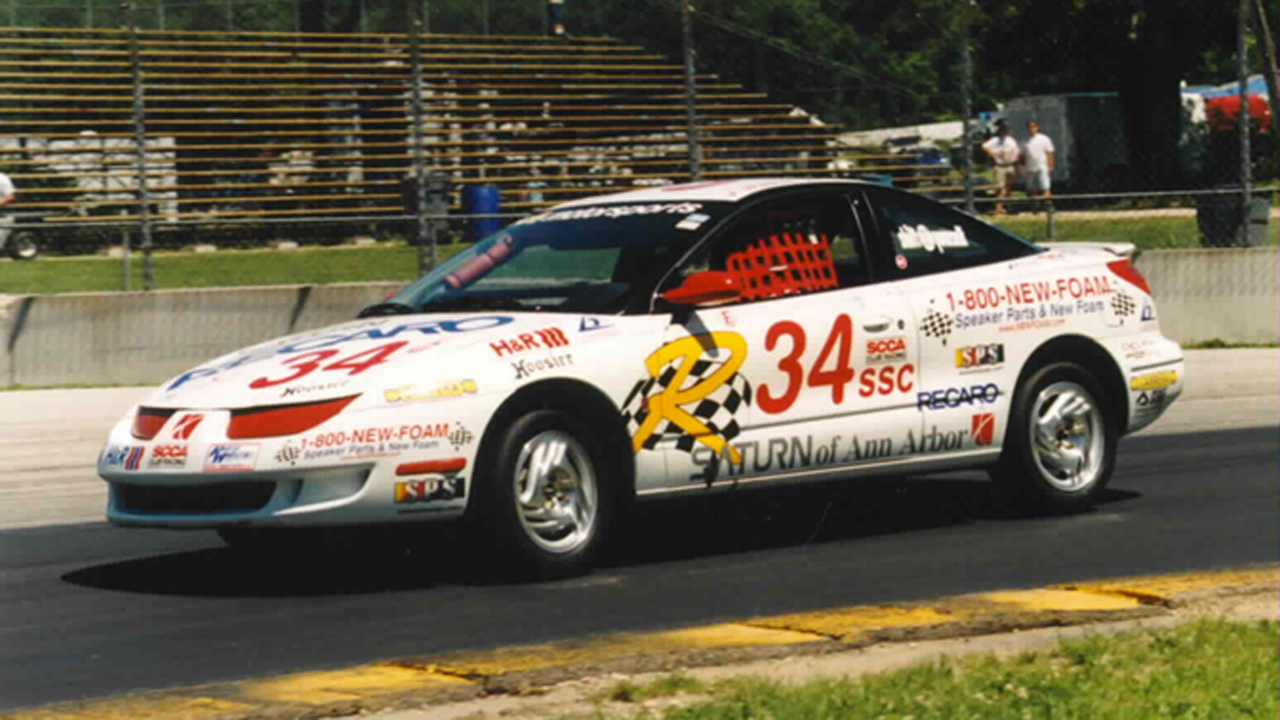 Of course, he went faster as well to win the pole position, but could only muster a 2:56.2.  This was going to be a close one…the rest of the SSC field was over 2 seconds behind either of our times!

Sitting on the false grid for 30 minutes while the Spec Racer carnage was cleared allowed us to formulate our preliminary race plan. Our strategy was to tuck in behind #49 at the start and pull away from the rest of the SSC field until we could (?) make a move for the lead.  There would really be no purpose in racing from the start and letting the rest of the SSC field catch us.  Ah, what a foolish mistake…but no time to think about it – there’s the 5-minute warning!

And now, for the biggest news of the weekend.  At the start of the race WE SAW THE GREEN FLAG!  Our newfound starting techniques allowed us to maintain our 2nd place position at the start and tuck in behind #49.  So far, so good! 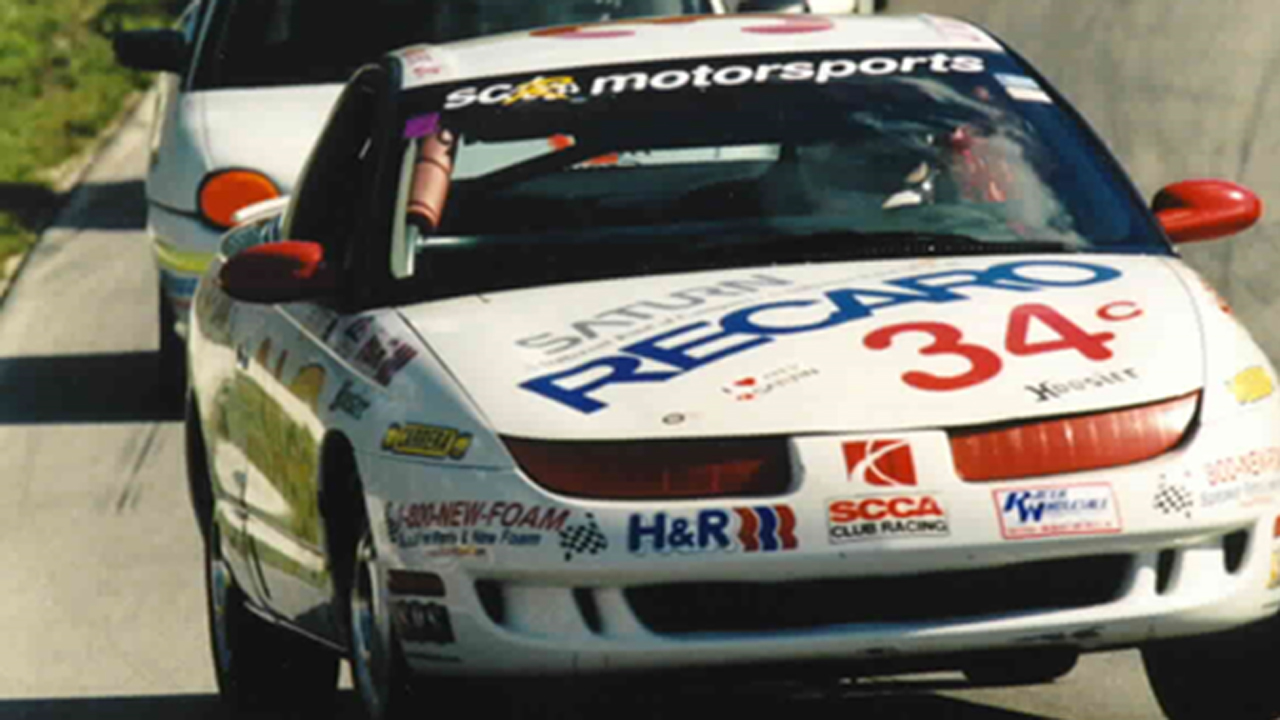 For 6 laps we ran right behind the #49 car and managed to pull off an 8 second lead on the rest of the SSC pack.  Still in learning mode, we made a few mistakes, but never enough to take the pressure off the race leader.  Until lap 7.

Remember how much we like running with the Ferraris in T1?  Well, on lap 7, a T1 355 tried to pass us on the inside of turn 7.  For those of you not familiar with Road America, turn 7 is a flat-out right-hand turn which is followed immediately by a short straight.  Going into the corner we pointed the Ferrari to pass us on the outside of the turn at the exit.  He decided that he wanted to take the line on the inside of the turn, and proceeded to do so.

Guess he didn’t realize he was going too fast.  As it ended up, he pushed wide at the exit and started coming at us.  We had a quick decision to make:

One of these days, we’ll hit a Ferrari.  After the dust had settled and the gravel was sprayed over the turn, we were pointed in the right direction, only slowed a bit, but now a solid 6 seconds behind the #49 Neon – just far enough behind where we could not effectively draft.  Running him down was going to be a challenge.

Over the next 5 laps, we did everything possible to try to regain the lost ground.  In the process we set the fastest SSC lap of the race (2:57.3 – it was humid), but still finished 6.1 seconds behind #49.  The good news, of course is that we scored our best finish of the year – SECOND PLACE!

And that is the end.  Impound went without incident and the podium ceremony was a welcome new experience for team scR. 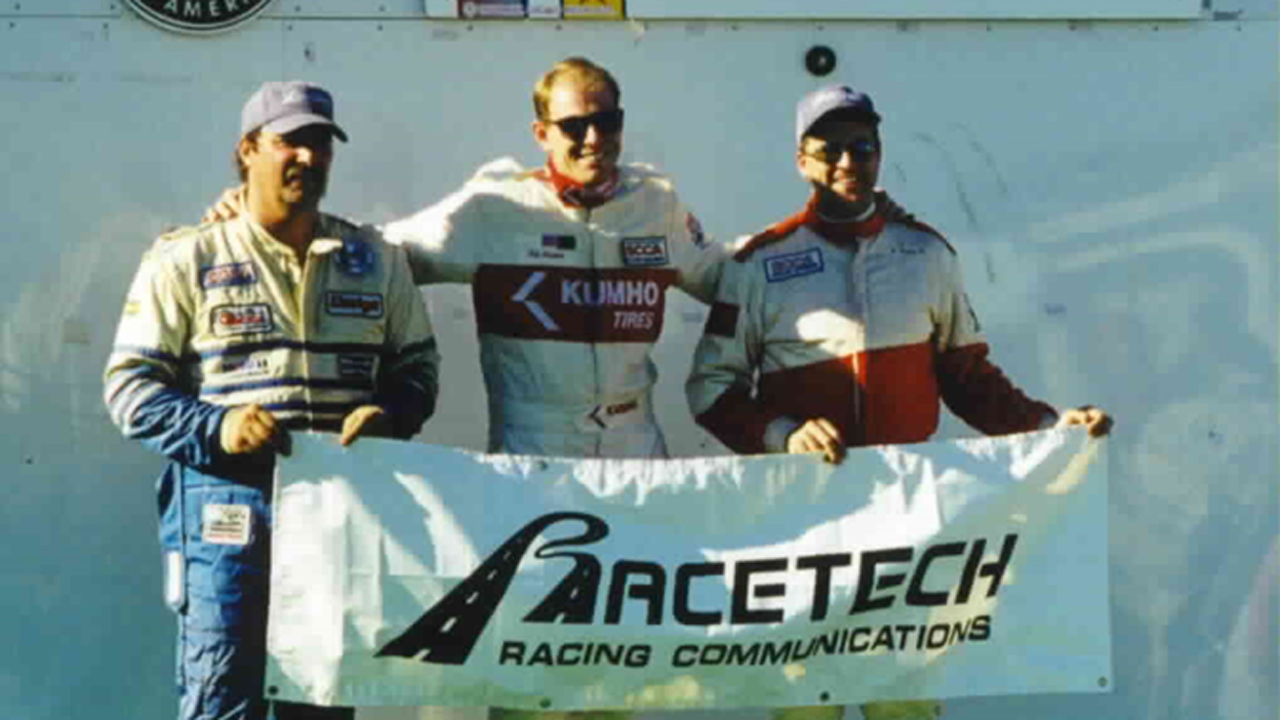 Thanks again to the crew for making sure the car was up to the task.  Road America can really take its toll on a race car over the duration of a 45-minute event in 90° weather, but the SC2 never missed a beat.  Way to go, guys and gals.

And finally, we need to take a minute here and sneak preview a new team scR ‘sponsor’.  Hoosier Tires has been helping us throughout the year with technical support and an incredible product, and now that we are both realizing the benefits of such a partnership, there might just be a ‘next chapter’ as the season unfolds.  Watch this space for details, and see you at IRP!