Another weekend, another battle scar <sigh>.  In an attempt to keep this newsletter short, I will make the pictures really big (although they are new pictures from Mid-Ohio, not from the Glen)!

Every time we head East to Watkins Glen, it is sort of like a little ‘Homecoming’ for team scR.  This year we had family, friends, and crew everywhere – in the paddock, in the pits, and in the grandstands.  Thanks to everyone who came out to support us – especially Dan, Pat, John, and Dana!  Once again, it’s the crew that makes the car competitive.

For those of you keeping track, our best time last year at the Glen was a 2:32.5.  As we polished up the car Friday night, we made it our number one priority to better that time.  In a National field of 16 SSC cars, we knew we had to improve to remain even remotely competitive!

Saturday morning, we took to the grid and began our practice session.  Since it was hot and humid, the car felt a bit down on power; the chassis, however, felt great!  Because I was still getting my confidence back up (the Glen has many high-speed corners), we were not expecting to set any lap records, but when the times were posted, we were more than satisfied with our 2:31.0 – 1.5 seconds faster than our previous best!  Of the 16 cars in our class, we were 6th fastest. 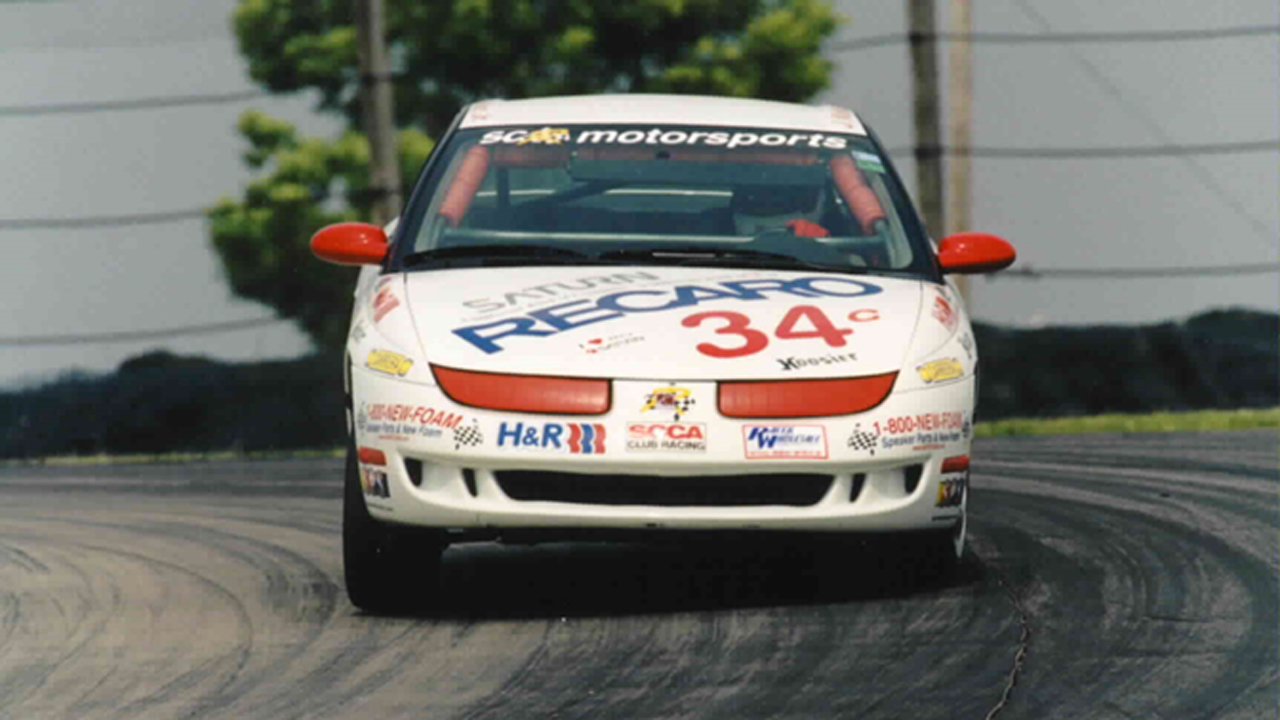 Fortunately, we ran well in practice, because right after lunch the rain rolled in.  As we watched the Formula cars sliding all over turn 1, the Stewards decided to cancel the rest of the afternoon activities.  The talk in the van went something like this:

James:  “I wonder how they will set the grid now…”

John: “I need to re-evaluate the rain set-up…”

Dan: “Let’s review the rain line here at the Glen…”

Their decision was to use our practice times as the official grid.  Cool!  We packed up and headed home for the evening, contemplating our 6th place qualifying effort.  We knew that in the morning we would need to find a little more time, since the fast C cars were in the high 28’s / low 29’s!  Hopefully the weather would work out for us.

Sunday morning the fog rolled in.  Then it rolled out.  Then it rolled in.  This continued until all three of the morning races were Black Flagged.  It seemed that the weather could not decide what to do with itself.  Fortunately (again) we not scheduled to race until 3:00.  We crossed our fingers and hoped the fog would burn off by then.

As we took to the false grid, the rain clouds began to move in.  Here we go again!  We had prepared for the rain by bringing all 4 rain tires to the pit, but we were sitting on the grid with our race tires as the drops appeared on the windshield.  As the 1-minute warning was given, we started the car and hoped for the best – after all, everyone else was on race tires too!

We will not discuss the start of the race, since in typical scR fashion, I could not see the Green Flag and lost 3 positions by turn 1.  Some things never change.  We really need radios.  Anybody work for Motorola?

Anyway, over the next 3 laps, we managed to regain all 3 lost positions and planted ourselves firmly back in 6th place – inches from the Neon in 5th.  With a field this big, the racing is just incredible – every turn someone would stick their nose in and try to get by.  This time, though, we were the ones doing all the passing, and managed to hold off everyone coming up from behind.

On lap 4, a bunch of B cars got together and forced a full course yellow.  As we paraded around the track for 3 laps, I mentally prepared for the task at hand – get by that Neon in 5th (#2) and pass the Nissan in 4th (#17)!

After the restart, we ran nose-to-tail with the #2 car.  The #17 car pulled a few car lengths out in front, but not enough where he could sit back and enjoy the scenery.  Finally, on lap 11 the Nissan ran wide going down into the boot and checked up in front of the Neon.  Perfect!  I dove tight to the inside and ran by them both.  The Neon followed me by, and together we began to pull away from the Nissan. 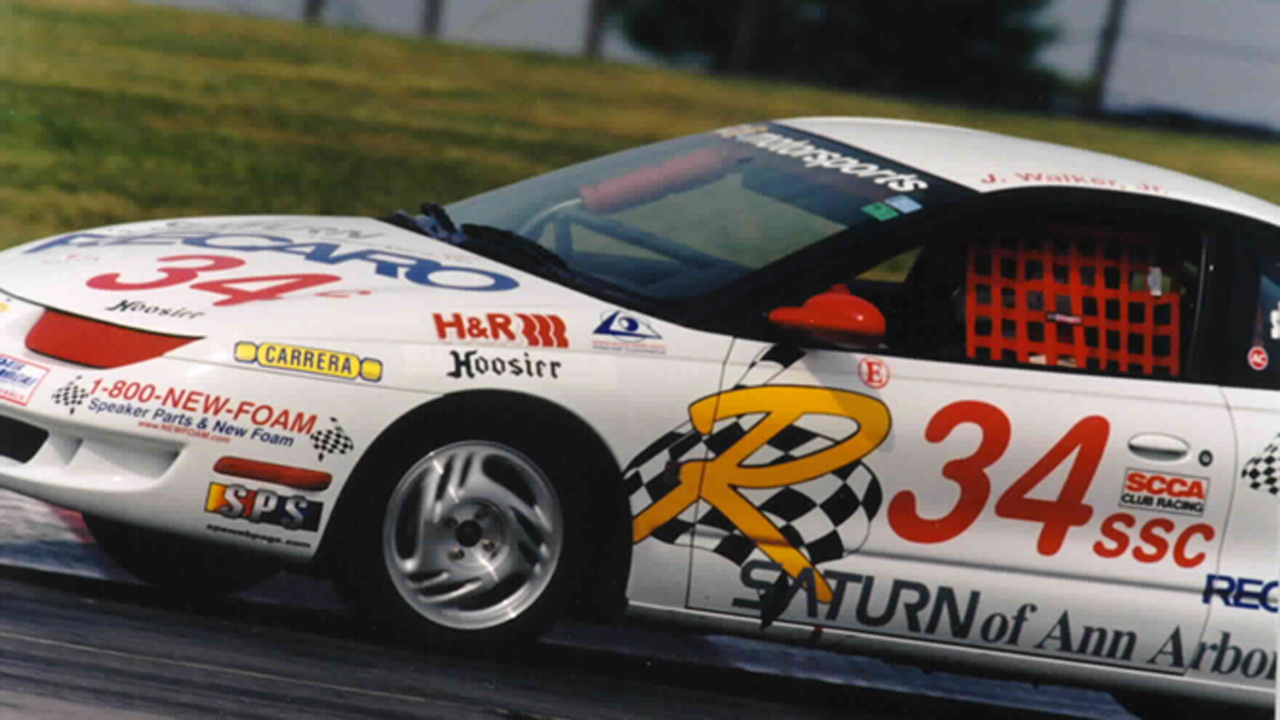 Because we had been racing with the cars in 4th and 5th for 7 laps, the race leaders were far enough in front that we had little chance of catching them before the end of the 14-lap race.  Only 3 laps to go – and a hungry Neon right on our taillights!

Unfortunately, with only 1 lap to go, the Neon tried to pull off a pass on the inside going into the toe of the boot.  We managed to stay in front of him, but he went in WAY too hot and pushed right into our rear passenger side quarter panel.  BAM!  I kept my foot in it and kept the car straight, but the impact slowed us down enough that the Nissan in 6th was able to catch up a few car lengths.  Not good.  The car kept going, so I kept driving, not knowing the extent of the damage.  (Post-race inspection revealed NO structural damage and no polymer panel cracking – just some missing decals.  This car is bulletproof, or at least Neonproof!)

On the final lap, the Nissan – who was now set up to strike – made a great pass on us going into the inner loop.  I tried to get back by him 2 turns later, but ended up pushing wide – really wide – bad decision – and let the Neon sneak back by as well.

And that, scR fans and followers, is how we took the Checkered Flag.  A 6th place finish out of 16 starters.  Add the points to our total.  But the best news was that we managed to pull off a bunch of 2:29’s, with a best of 2:29.3 – 3.2 seconds faster than our best lap in 1997.  We packed up and headed back to Michigan completely satisfied with our performance.

Next stop – Road America for the June Sprints!  See you at the track…