And so, the Strawberry Kiwi Gatorade saga continues…

After a 5-week break, team scR finally got it back on the track last weekend at Mid-Ohio in Lexington, Ohio.  Mid-Ohio is one of our favorite tracks for a number of reasons:

This time out was no exception.

First, hats off to the crew support for the weekend.  Led by crew chief Eric P, energetic crew mates Tom and Mark made sure that the car was always to take to the track, leaving the driver to worry about more important things – like taking allergy medication.  Thanks also goes out to all of our other supporters who showed up for the race on Sunday – John, Jen, Kevin, and Susan from SPS, Rob and the Dressel brothers from Saturn of Ann Arbor, and finally, John and Dana – two original scR groupies. 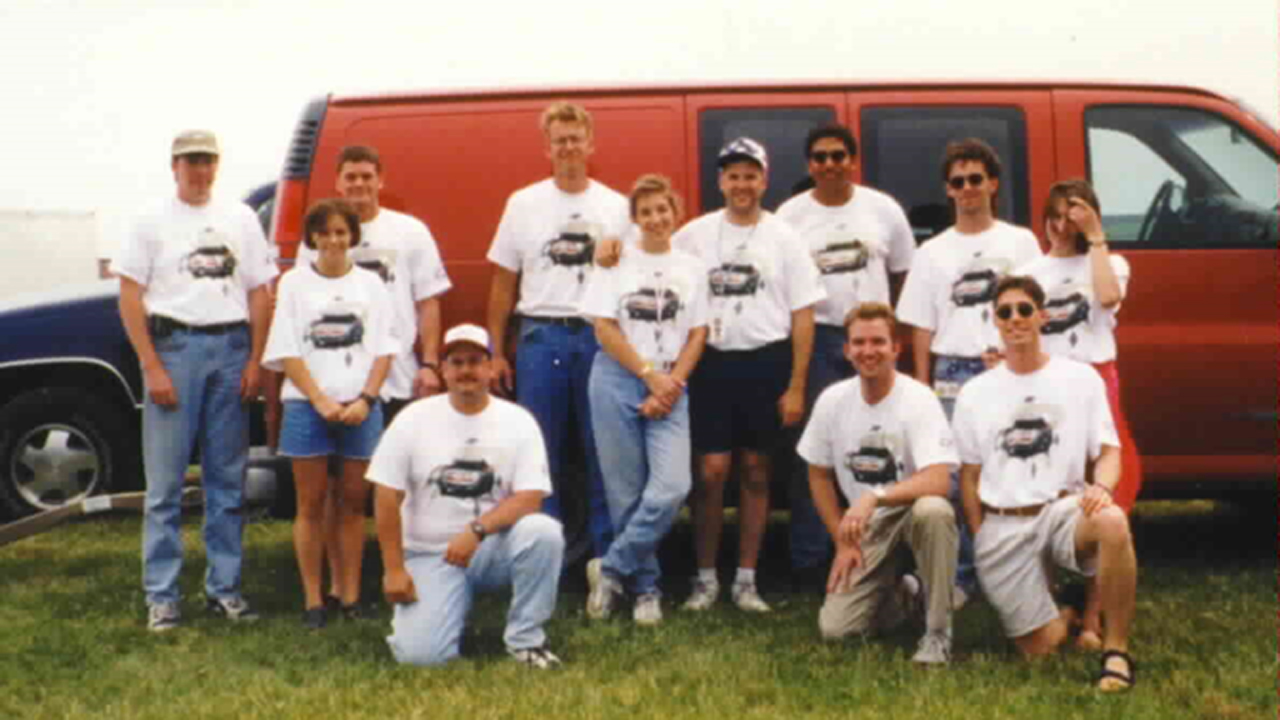 The weekend started in typical scR fashion – the rain began to fall as we turned down Steam Corners Road!  Fortunately, that was the last we would see of the rain for the weekend, although the skies were threatening all day Sunday.

Saturday AM, we ran our first practice session of the weekend.  After 8 laps we took our regular data, debriefed, and began to prep the car for qualifying.  The tire temp data showed that our pressures were a little off, and that I was driving kind of conservatively, but out lap times were a full 1.4 seconds faster than we had ever run at Mid-Ohio before – we were running 1:53.1’s after last year’s best of 1:54.5!  Obviously, the new suspension package is doing the job we had hoped it would do. 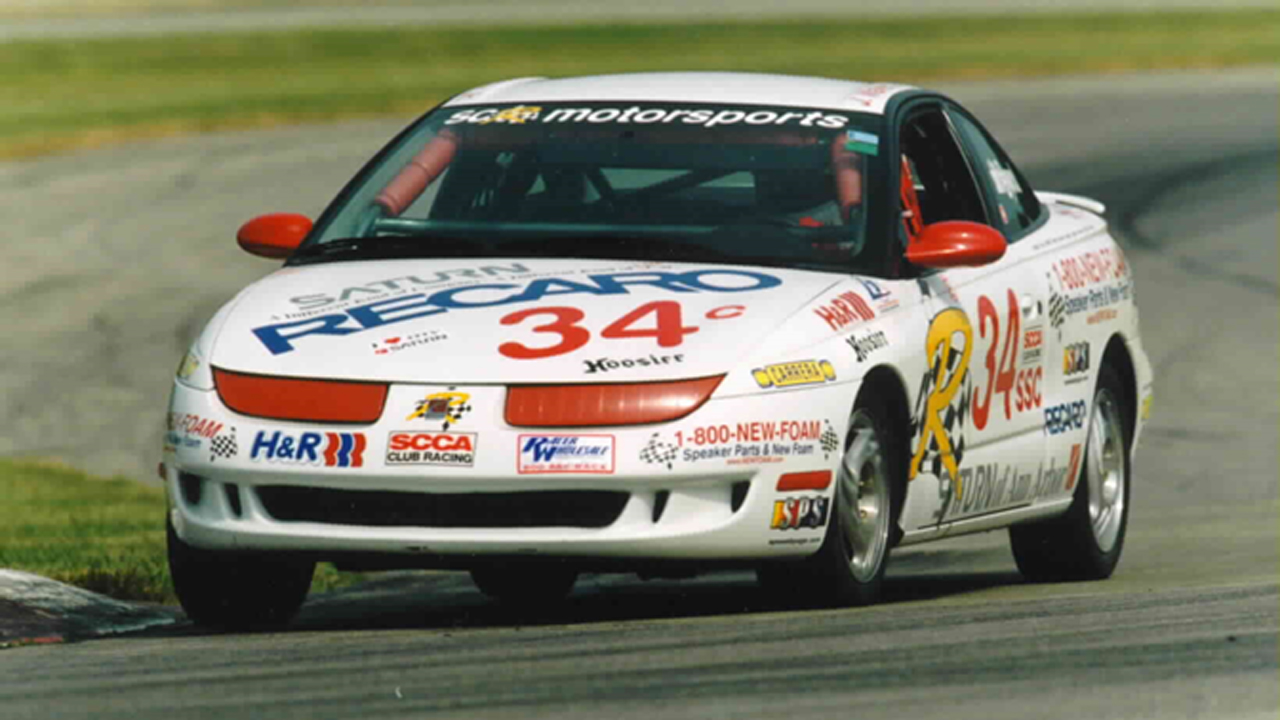 Qualifying was a whole different ball game.  The Showroom Stock class (that’s us) was grouped with the American Sedan class (several early F-cars and Mustangs), T2 class (several more late model F-cars and Mustangs), and T1 class (2 Vipers, 2 Ferraris) – 54 cars in all.  This apparent mismatch in vehicle speeds made for a frustrating session.  With all of the traffic, the best we could manage to run was a 1:54.0 – almost a full second off our best time earlier in the day.  The grid sheet would later inform us that this time was enough to place us 11th out of 18 cars in SSC.  Respectable, but not what we were hoping for – our 1:53’s would have had us running with the cars in 6th and 7th.

Now for the good part.

Sun day morning the wind was gusting, the skies were cloudy, and the forecast called for rain.  We tempted fate and prepped the car first thing in the morning, leaving on the dry tires and hoping for the best.  For once the best happened.  Of the 54 cars on the grid, 17 of the 18 SSC qualifiers were gridded in line – one after the other, with team scR right in the middle of the pack.  If nothing else, we were planning on having an exciting start, with enough position swapping to make the fans happy.

When the green flag dropped, we immediately fell from 11th to 12th.  I hate starts from the back of the pack at Mid-Ohio!  Only those teams with radios can ‘see’ when the green is dropped.  At any rate, we accelerated through the carousel, ran down the front straight, and dove in to turn 1 at the end of an 8 car 90 mph train.  This was going to be exciting. 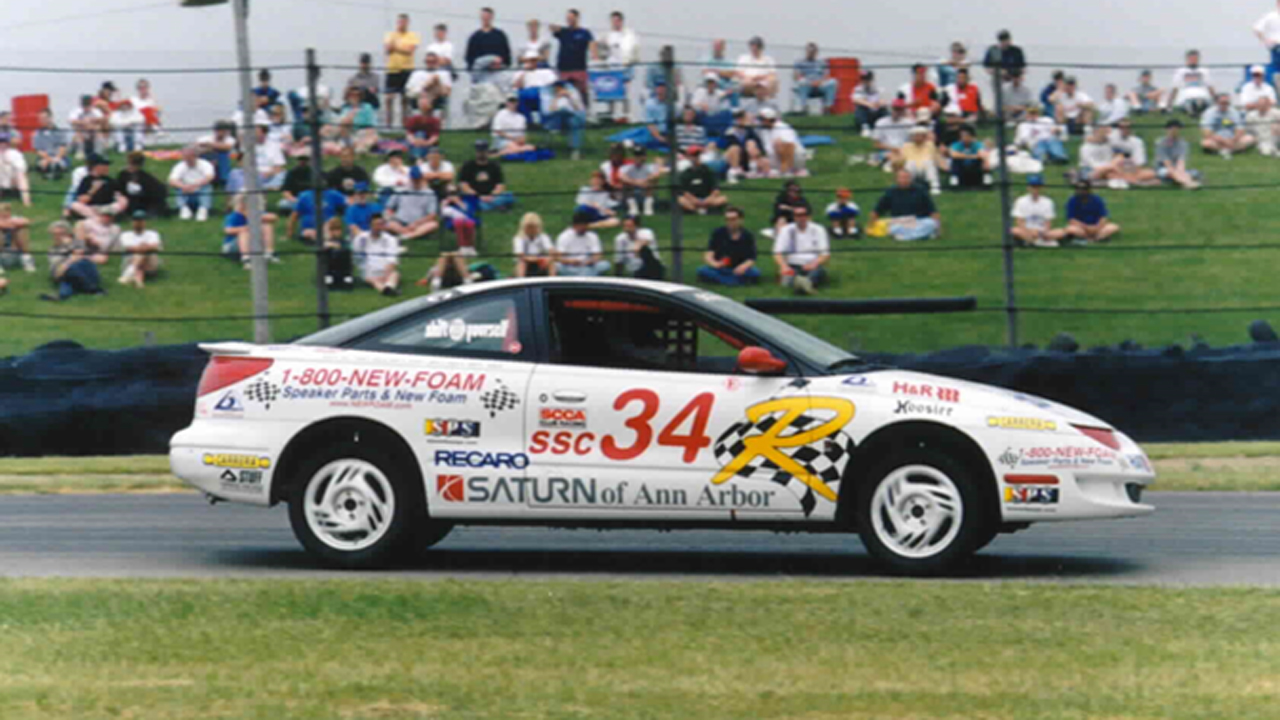 For the next 9 laps we battled for position every corner, with cars coming up from behind while we tried to run past the cars in front.  Running 3 wide in to several of the corners was commonplace as the race progressed and we began to learn where we were faster than our fellow SSC drivers.  Although some of our passes were not very pretty, we managed to make our way from 12th to 7th over those 9 very exciting laps, putting us toward the front of the SSC train.  Unfortunately, the race leaders had pulled a little out in front as we battled for position behind them, but the racing was fantastic!

On lap 10 (I think), running in 7th place behind a Neon, I noticed a T1 Ferrari running down the back straight on our right at about 160 mph.  I decided it was best to let him go by as we entered turn 6, as did the Neon in front of us.  Just as we crested the hill at turn 7, the Ferrari panicked as he came upon a spun-out Honda sideways across the track.  Even though the Honda was well off the racing line, the Ferrari laid into the brakes and dove back in front of the Neon in front of us.  Well, before you could say ‘Hi’, we were into his rear bumper.  Wham!  My train of thought went something like this: 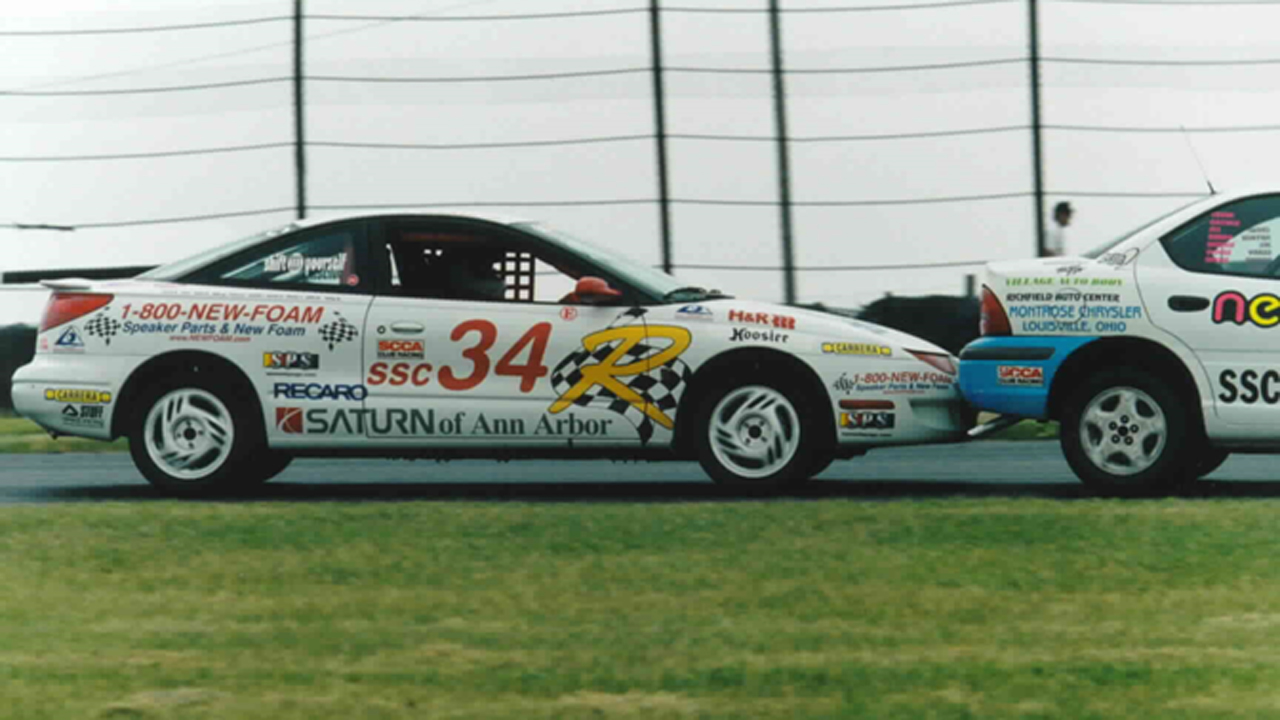 Luckily, nothing more than cosmetic damage was experienced by both of us, and we continued to race on – until lap 11, when a slower AS car (who was NOT racing for position!) tried to pass us in the esses and forced us off the pavement as he pushed wide, spinning us to a complete stop, just inches from the gravel trap.

In the time it took to pull the car from the grass, 3 cars in class zipped by.  The last two laps were completely uneventful, as there were no cars in sight either in front of us or behind.  We took the checkered flag under part throttle, waving to the starter as we passed over the line.  An anti-climatic finish to an incredibly exciting race.

After timing & scoring put together the final race results, we confirmed our 10th place finish of the 18 cars that started the race, but our best lap time of a 1:53.1 had us running with the cars in 4th and 5th – had we caught them.  The Neon we had been battling for 6th ended up in 6th – a trophy finish given the number of cars entered in the class.  Good for him, but bad for us. 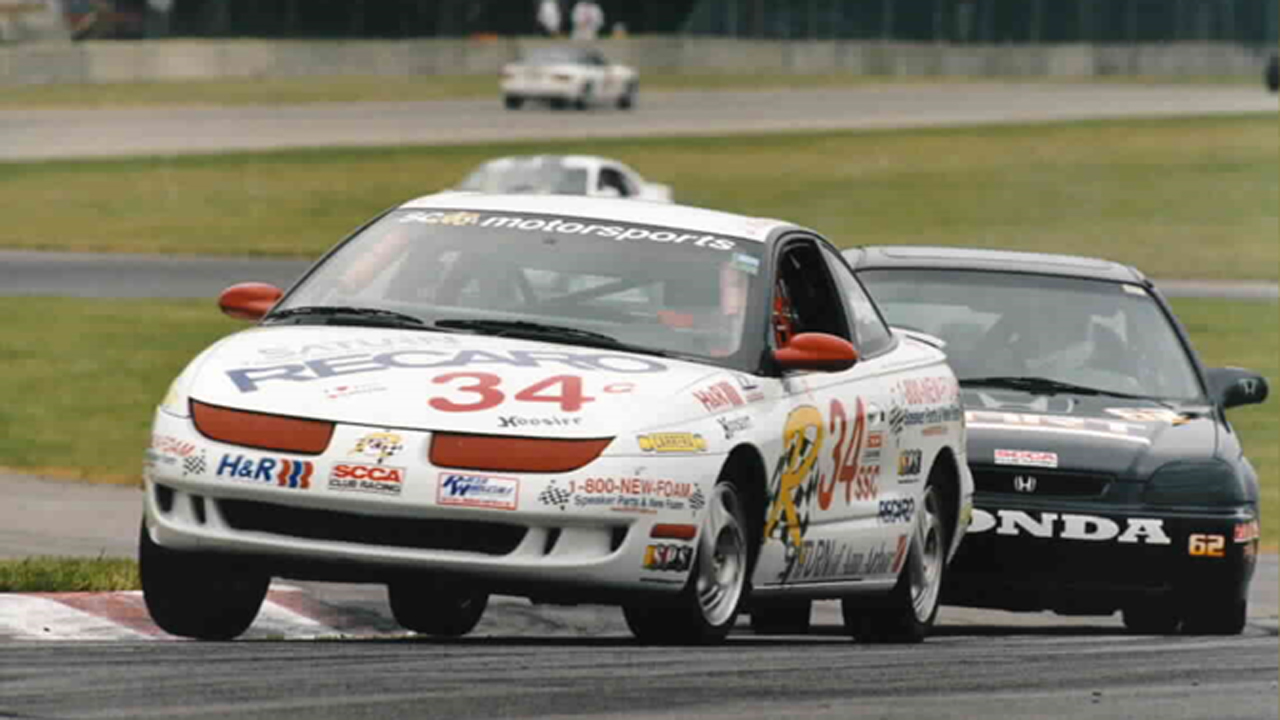 Post-race inspection of the Saturn battering ram revealed NO structural damage.  In fact, not a single part had to be replaced – yet another testimonial to the durability and raceworthiness of the Saturn SC2.  Although we bent the hood and front fascia back into place, we made sure that we left a few wrinkles, just to give the car character – and to show the Neons we mean business, man!

So, that leaves us 1 week until the trip to Watkins Glen in New York.  Remember that crew and spectators are ALWAYS welcome at all scR motorsports events – come out and help us join in the fun!  See you at the track…