Well, if nothing else this weekend, I learned NOT to bring Strawberry Kiwi Gatorade to the next event.  All six bottles were left floating in the cooler Sunday night, while all the Gatorade Classic (yellow) and Gatorade Punch (red) were gone Saturday afternoon.

But you are not here to read about our fluid consumption curiosities.

What a weekend!  This was team scR’s first race of the 1998 season – and the first ever Club National held at GingerMan.  We went into the weekend – after a test and tune day the Monday before the event – confident that the car was going to stay in one piece.  The only real unknown coming into the event was the driver’s ability to keep up with the rest of the field.

Crew support was provided on Friday, Saturday, and Sunday by Tom and Eric.  On Sunday, the rest of the bunch showed up for the race – thanks to Mark, John, and mywonderfulwife Dana for their help as well.  We even had a pair of spectators show up from Chicago just to watch our race, so the roster was completely full!  I just hope the turnout is this good for the rest of the season – with a crew like this, you can’t help but have a good time.

Walking through the paddock on Friday night, we got a good chance to size up the competition – and there was a lot.  16 cars were registered for the SSC field and included:

Over dinner Friday night, we planned to strategize for Saturday.  Luckily, dinner took about three hours to show up at the table, so we had a lot of time.  Our plan went something like this:

Saturday morning was beautiful – clear, sunny, and cool.  We mounted up our new Hoosiers and headed to the grid.  We had never run the Hoosiers before, so we were expecting to play around a bit with tire pressures during the session. Fortunately, during our first tire temp stop, we discovered that the pressures were dialed in just fine, so we headed back on to the track to get warmed up for the afternoon session.  By the time all was said and done, we had turned in a few high 1:45’s – not a bad time for a quick familiarization with the track, but we would need to run faster in qualifying to run with the big guys.

And run faster we did.  Qualifying lasted for 12 laps – nearly as long as the Regional Races we were running last year.  For most of the session, we had wide open track time.  This allowed us to try different lines, different braking zones, and so on.  At the end of the session we had run a best time (according to OUR watch) of a 1:43.60 – and on sticker tires, even!  We figured that we were good for about 5th or 6th on the grid. 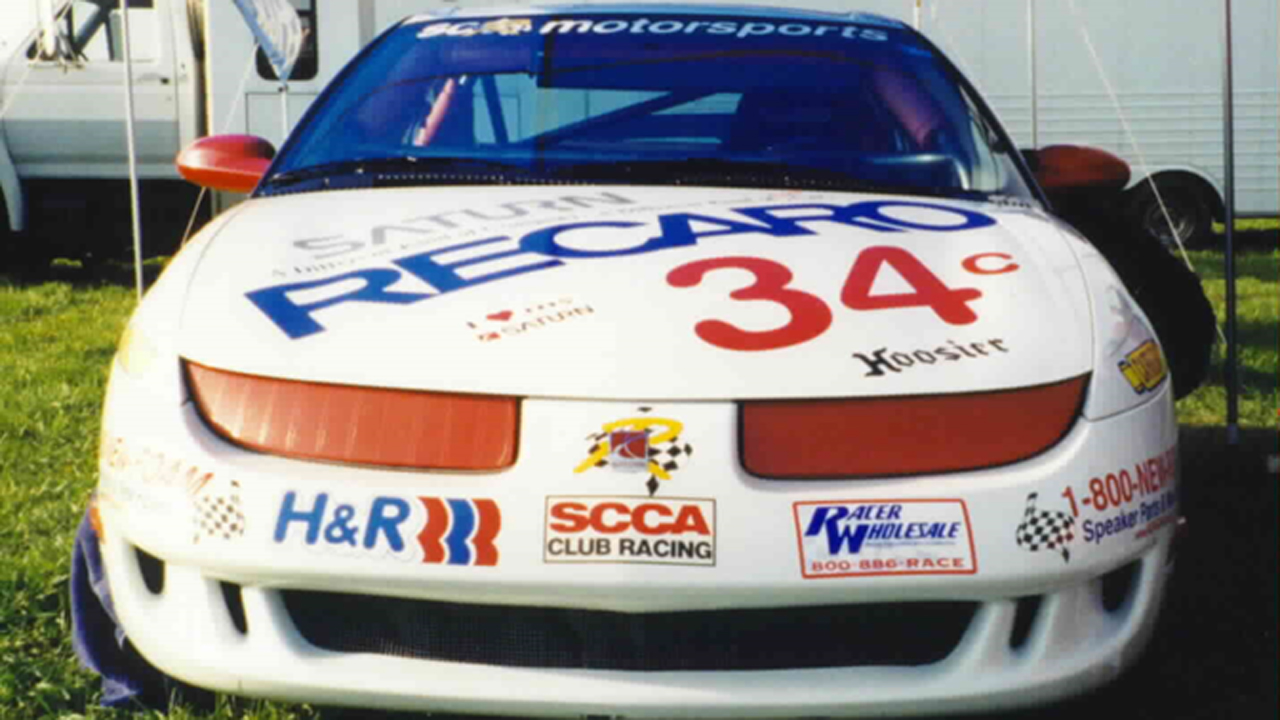 Turns out that timing and scoring had a bit of a technical snafu with our session.  Much to our surprise, they had recorded our best time to be a 1:41.1!  Rather confident that they had made an error, we said nothing and just smiled at everyone.  Sort of felt good to be SITTING ON THE POLE for once.  Of course, they found their error and corrected the grid, but now had us at a 1:44.99 – almost 1.5 seconds slower than we had recorded, and had us gridded in 7th.  We elected not to complain, and accepted our starting position graciously – after all we still had out-qualified several of the faster (?) teams!

Minutes after the last qualifying session had ended, the heavens opened and the rain came down.  Perfect timing, but left us on edge for what to expect on Sunday.  Everyone knows just how much I love to run in the rain…

Sunday morning the rain continued to flood most of the paddock area, the track runoff areas, and the parking lots.  We arrived in time to watch the first 3 races – a yellow flag festival.  Cars and mud were flying everywhere as the competition unfolded, leaving us to think “why the hell are we here?”

GingerMan has a mandatory quiet hour from 10:30-12:00 on Sunday mornings, which gave us an opportunity to sit back and think about our race strategy before we took the green at noon.  Our revised strategy went something like this:

But, of course, the big decision was rain tires vs. dry tires…

Thirty minutes before we were called to grid, Tom and I wandered up to the track.  The rain had let off, and a good wind was blowing from the West, partially drying the track in sections.  We both leaned over the guardrail in silence, stared out at the oncoming clouds, and decided to run…the race tires.  Yes, we had been burned by this decision before, but what the heck – it had to work out for us at some time.  Why not now?

After hurrying to mount the Hoosiers, we made our way to the grid.  Looking around, it was apparent that the group was split on tire choice – about half the grid was wearing rain tires, half race tires.  50% of us were going to be happy.

On the pace lap, the track looked ugly.  Standing water was found in several corners, mud sprayed across turn 6, and the clouds didn’t appear to be going away.  As the pace car headed down pit row and the pack accelerated toward the starter stand, I pulled off to the far-right side of the track and let about 4 hungry Neons by.  Remember: let everyone else crash in turn 1.

By the time I had reached turn 1, I had fallen from 7th to 11th; however, by turn 9 we were back in 7th again.  The most exciting moment must have been when car 55 (hi Carl!) went sliding wide in 6 in front of us, spraying mud everywhere – across the track, over the car, and in the car.  I will be picking mud out of the interior for about a month.  But back to the race. 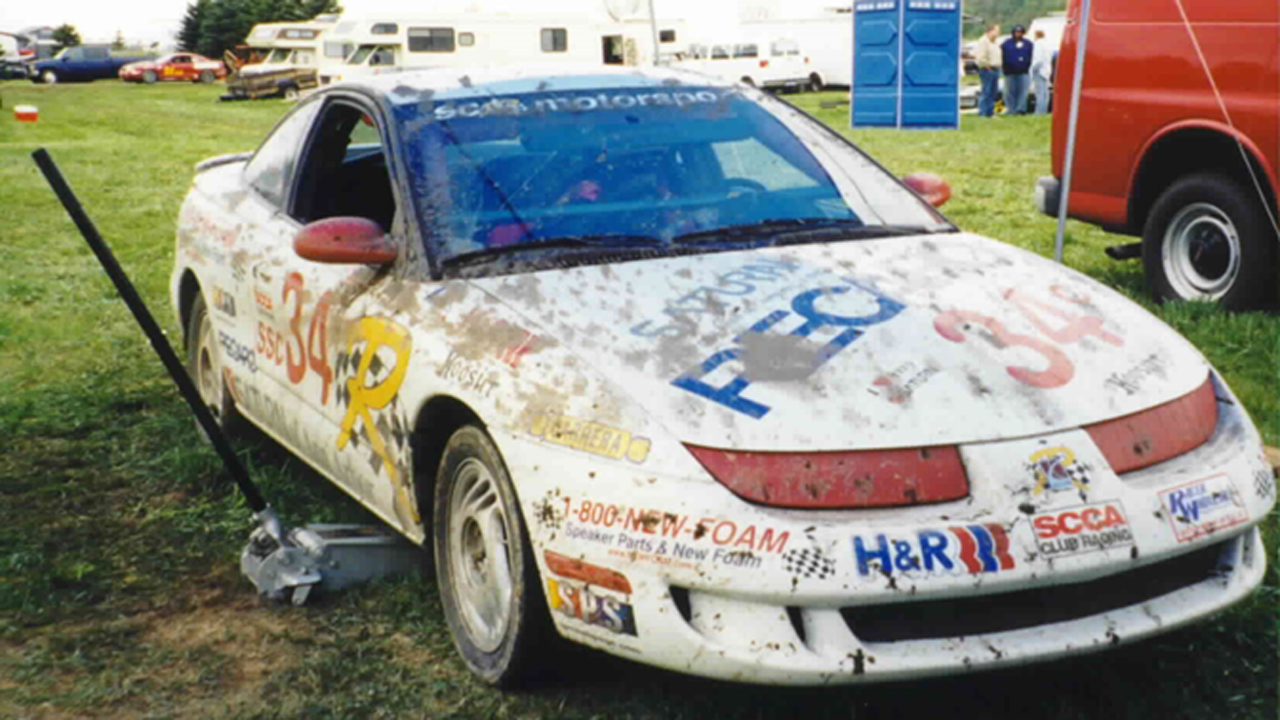 After completing 1 lap, we had fallen into a single file train.  I was in 7th, but only a car length or two from 5th and one mistake from 10th.

Over the course of the next 15 laps, I managed to get by 2 more cars and was hounding car 76 for 4th position.  For multiple laps we ran nose-to-tail, always looking for a way by.  Although the racing line was drying out, the rest of the track was rather wet, so trying to pass was considerably more difficult.  Twice I tried to run wide out of turn 10 to get alongside 76 and twice he ever so subtly pushed us off the track.  Twice I tried to pass under braking in turn 1, and twice I was forced up and over the concrete apron.  Even though we kept getting pushed around, this was fun!

On lap 15 we got the 1 lap remaining signal from the starter.  By this time, 76 and I had caught the 06 car in 3rd place.  Our 3-car train was hurrying through the front half of the track nose-to-tail-to-nose-to-tail.  Coming through 10, I got a really good run on 76 and decided that, well, there was no other chance to make a move.

Coming into turn 11, 06 stayed far to the left of the track, 76 made his move to the inside to attempt the pass, and I went all the way around them both on the inside.  Proving that I had less gray matter than both of them, I outbraked them both into the turn, but at that point was unable to turn the car very effectively.  I ended up cutting across the grass on the inside of the turn, entering the track just behind the 06 car, but in front of the 76 car.  This small victory lasted but a second as the car pushed to the outside of the corner, allowing 76 to cut up the inside and by me to the finish line.

Taking the checkered flag in fifth place had never felt so good, only 1 car length out of a third-place podium finish!

So, there you have it – our first National race, our first National points, and an interior coated in mud (one of the grid workers told my crew he had seen cleaner Rally cars).  The tire choice actually worked for us for once, we proved we were as fast as some of the big names (the Hondas were nowhere to be seen), and showed the field that we were not afraid to throw the car around a little. 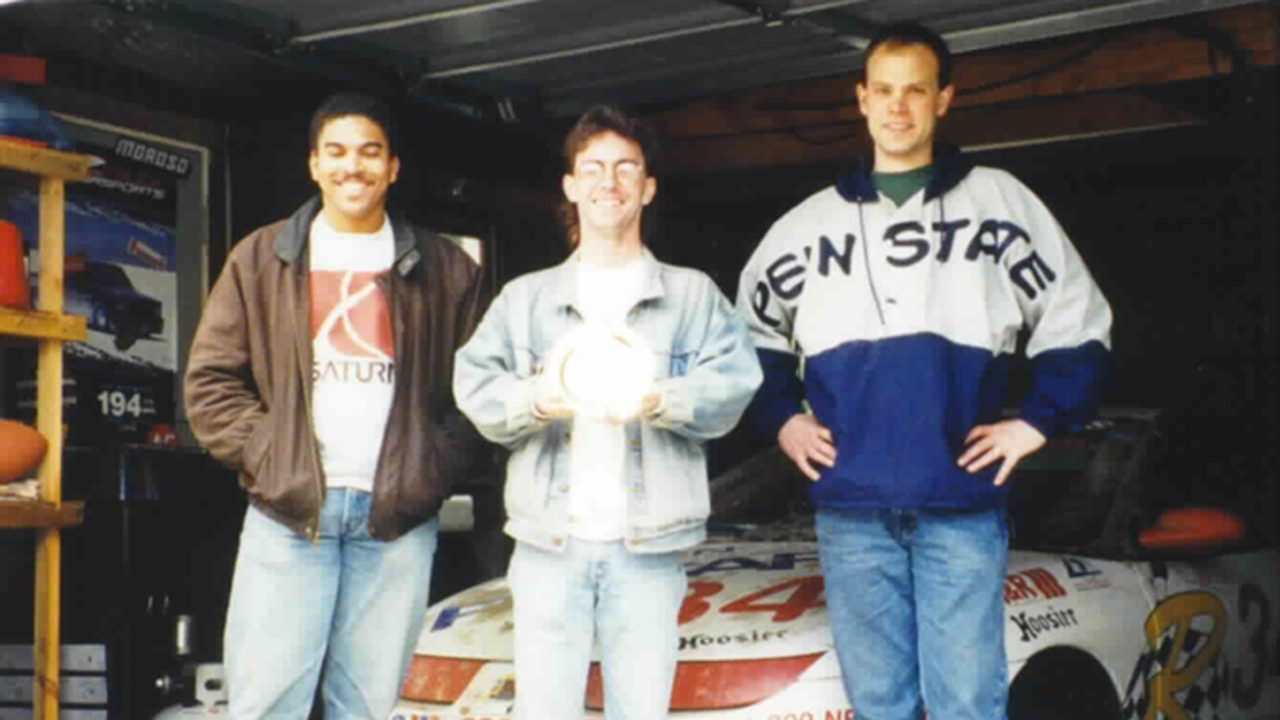 And we had fun in the rain for once (Bruce, you can smile to yourself).

Based on our success, we have revised the schedule for the rest of the year.  All of the Regional races have been removed from the schedule, and have been replaced by National events.  We plan on making a solid run at getting invited to the RUNOFFS in October, and need all the National exposure we can get.