We are so, so close.  All we need now is a little bit of racing luck.  Not a lot.  But just enough to get the job done. 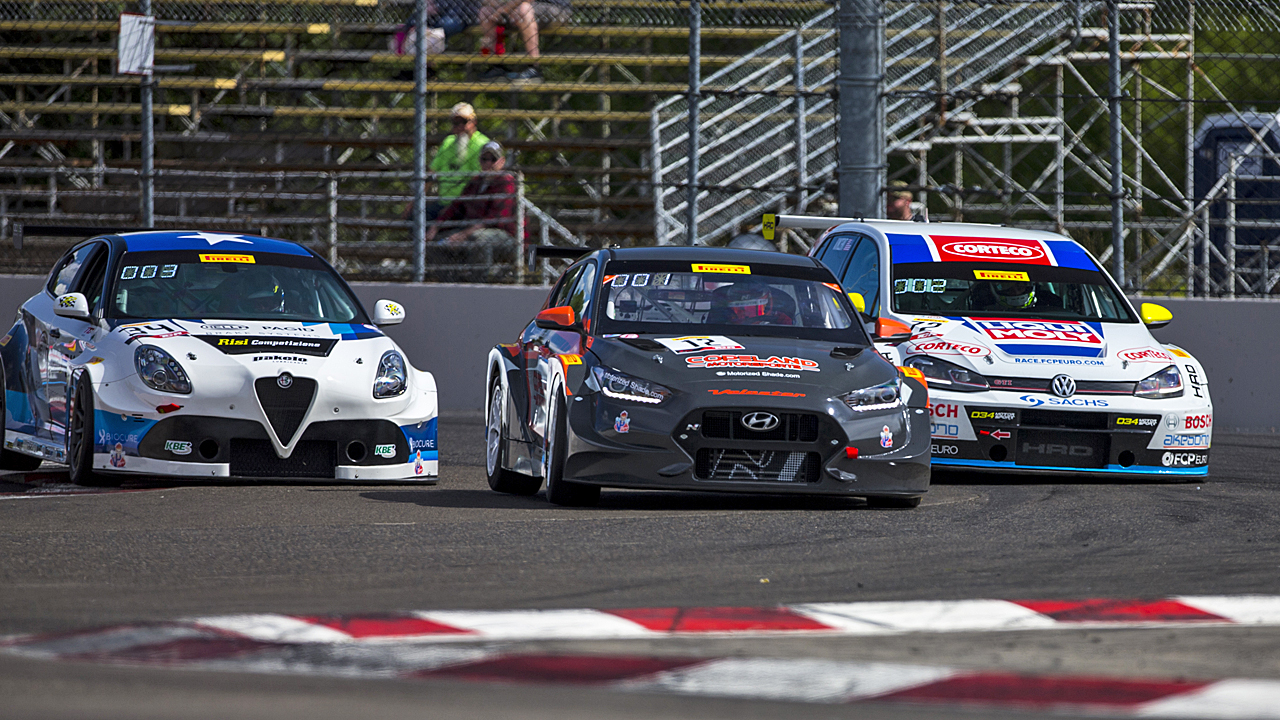 Heading three-wide into Turn 1 batting for the lead.  We are finally up to speed.

Q: Remind me again of where you were this weekend.

A: Pacific Northwest, here we come.  The farthest race from home on the 2019 TCR calendar had us racing at Portland International Raceway (PIR) in Portland, Oregon.  Approximately 2250 miles from Houston, PIR was built in the 1960’s by the City of Portland over the remains of the city of Vanport, a town completely destroyed by floods in 1948.  To this day the track remains under the ownership of the City of Portland and hosts everything from local car club shows to IndyCar races.  Most of the course is comprised of the original road structure that was in place before the water came in and wiped it off the map.

Q: That sounds like an odd place to race.  Is it a real race track?

A: Of course it is, but at only 1.97 miles in length, it’s short for sure.  And it’s also extremely narrow in most places, making it extremely challenging to get around the cars in front without a little bit of rubbing. 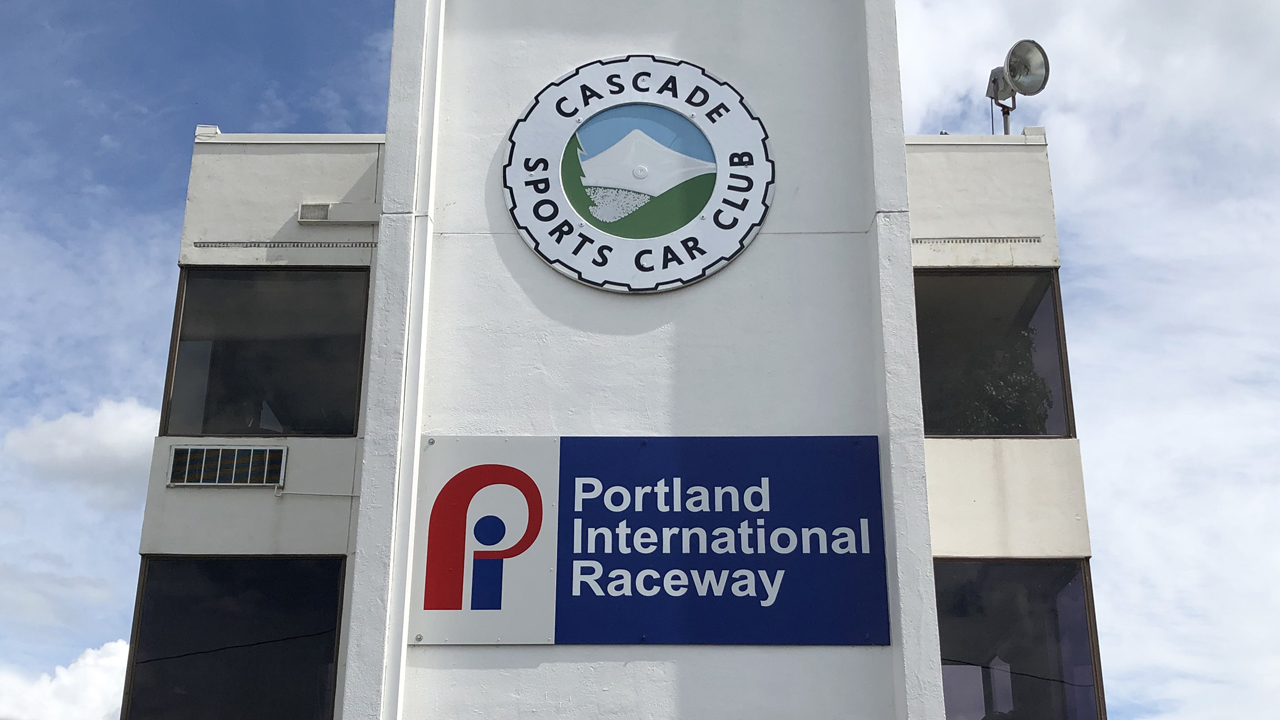 Welcome to Portland International Raceway, the track where it is virtually impossible to pass.

Q: Had you ever raced there before?

Q: Did the series offer a test day before the event to get up to speed?

Q: That seems to be a theme this season.

Q: So did you find a way to get some in some track time before Friday’s qualifying session?

A: Absolutely.  A number of Spec Miata racers had rented the track in advance of the Rose Cup Races, and I was able to tag along.  With the help (and by help I mean I cut them a check) of Chris Rhom at Rhom Innovations, I was able to preview PIR behind the wheel of a rental Spec Miata for three 30-minute sessions.

Q: Was the Risi crew around to work with you in the Miata?

A: No.  This probably explains why the driver’s seat in the Miata was still unbolted from the floor of the car when the first five-minute warning was given.

Q: How did that work out for you?

A: Surprisingly well.  The seat made it back into the car in time.  There were only about six or seven cars in the run group, and by the end of the third session I was able to turn both left and right in harmony with the general layout of the track.  The pace (consistent 1:35’s) was clearly well off what we expected from the TCR Giulietta, but a good time was had by all, the weather was perfect, and I felt substantially more prepared than had I just watched a bunch of in-car video. 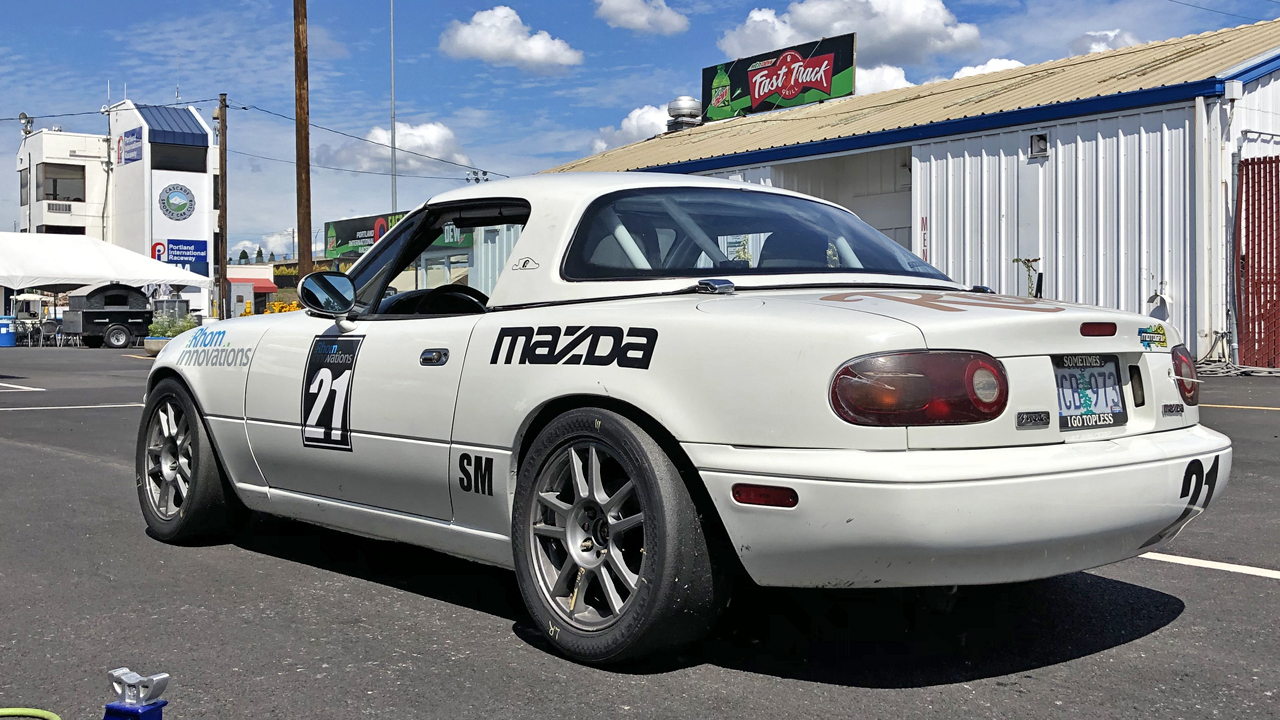 It’s no TCR car, but it got the job done.  Thanks, Chris!

Q: Did you and the crew do anything else special to prepare for the event?

A:  Yes.  We took some time to stop and smell the roses. 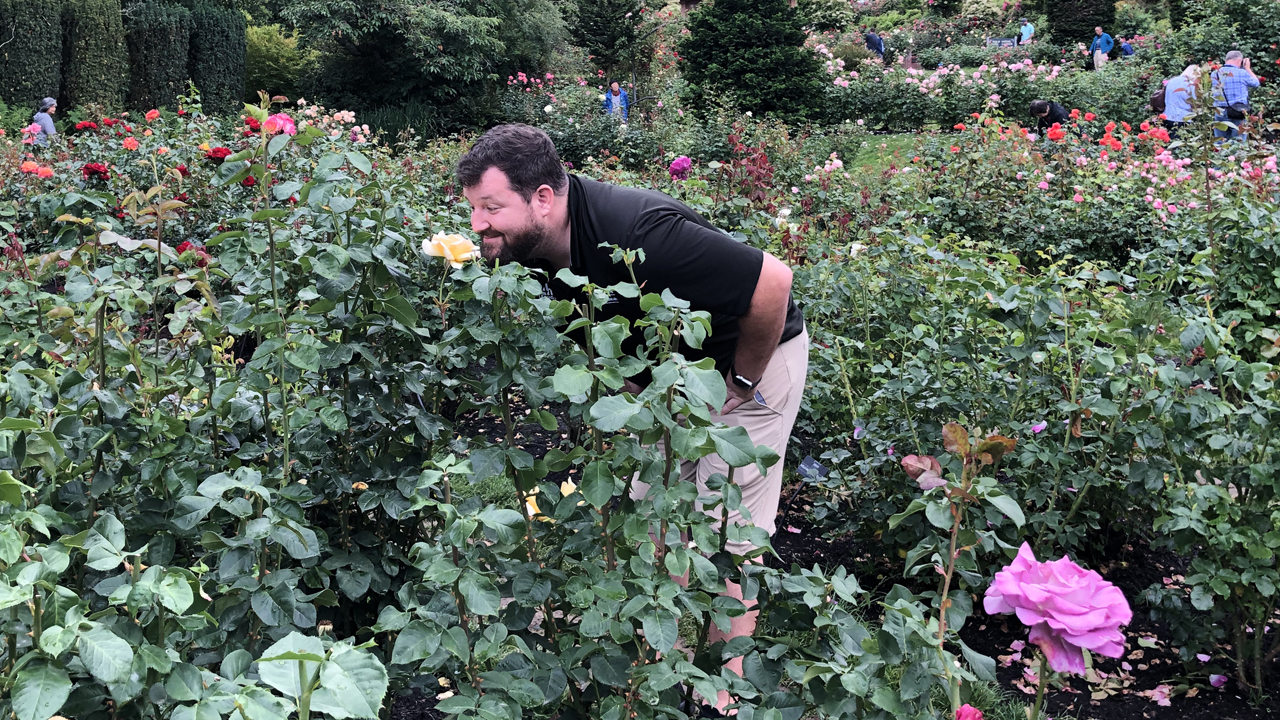 Miles taking some time to stop and smell the roses.  Everything in Portland is all about the roses.

Q: That’s so cute.  Were you fast on Friday during practice? 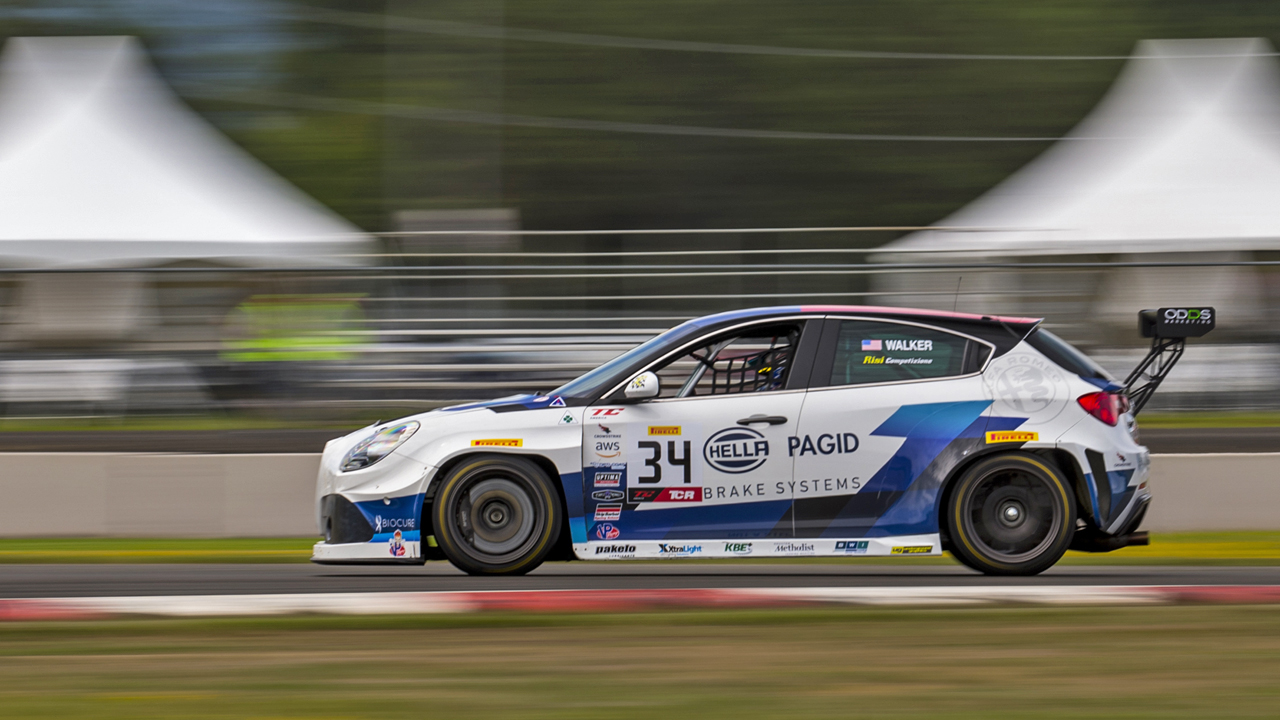 At speed during practice on Friday afternoon.

Q: Qualifying was next, correct?

Q: I suppose the conditions for qualifying were different than they were for practice?

A: Yes.  The temperature continued to rise all day.  While not exactly oppressive, the track temperature was over 120° F when we rolled on to the grid at 5:00 PM for our 15 minutes of qualifying.

Q: Did that slow the car down at all?

A: No, but traffic sure did.  We were grouped again with the slower TCA class, so getting in a clean lap was just about impossible on the short track.  We had set up the car to be fastest on Lap 3, but with all of the traffic to contend with, that plan failed miserably.  It wasn’t until Lap 6 that we finally had a clear track.  But by that point the tires were past their peak.

A: Remarkably, not so much.  The Hella Pagid Special managed to dig deep and laid down a solid 1:19.187.  You can check out the in-car footage of our fastest qualifying lap by heading over to our awesome YouTube channel after reading this newsletter.

Q: Was that good enough to be on the pole?

Q: You qualified in second place, then? 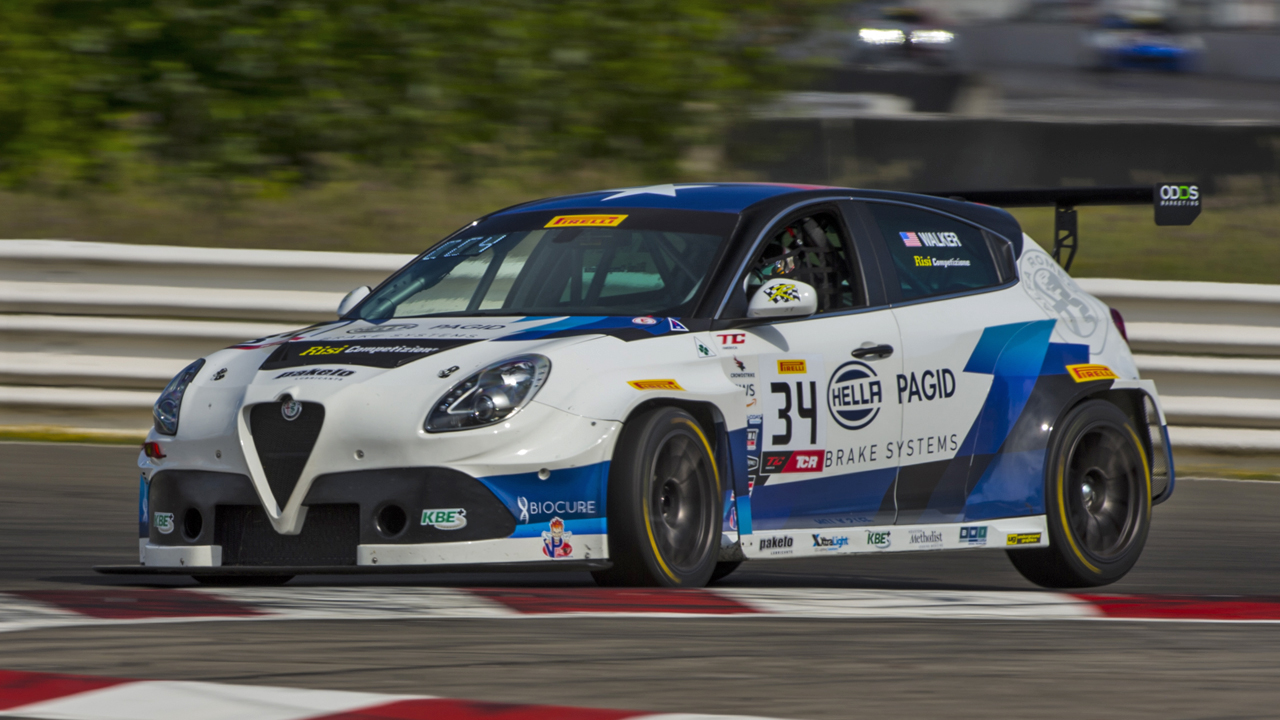 Only three wheels required.  And sporting new KBE+ stickers on the nose.

Q: How did the start go?

A: Not to plan.  We got a GREAT jump at the green, and easily pulled up into second place heading into Turn 1.  But the #12 Hyundai overslowed for Turn 2 which caused a chain reaction back though the field that essentially let two cars (both of the VWs) blow by us heading into Turn 3.

A: It wasn’t, especially since it is so hard to pass at this track.  At the end of the first lap we crossed the finish line in fourth place, but only 1.3 seconds behind the leader.

Q: What was your strategy at that point?

A: Wear them down.  All year long we have been the fastest at the end of the race, and we knew that if the race went green for all 40 minutes we would be able to pick them off one at a time as their tires went off.  Fourth place wasn’t a bad place to be as long as we stayed close.

Q: Did you stay close?

A: Absolutely.  For the first 15 laps we maintained a gap of between about 1.5 and 2.0 seconds behind the leader.  The #71 VW directly in front of us managed to make himself incredibly wide as needed, so while we could easily pull up behind him in the faster bits there was never a good opportunity to squeeze by and seal the deal for position. 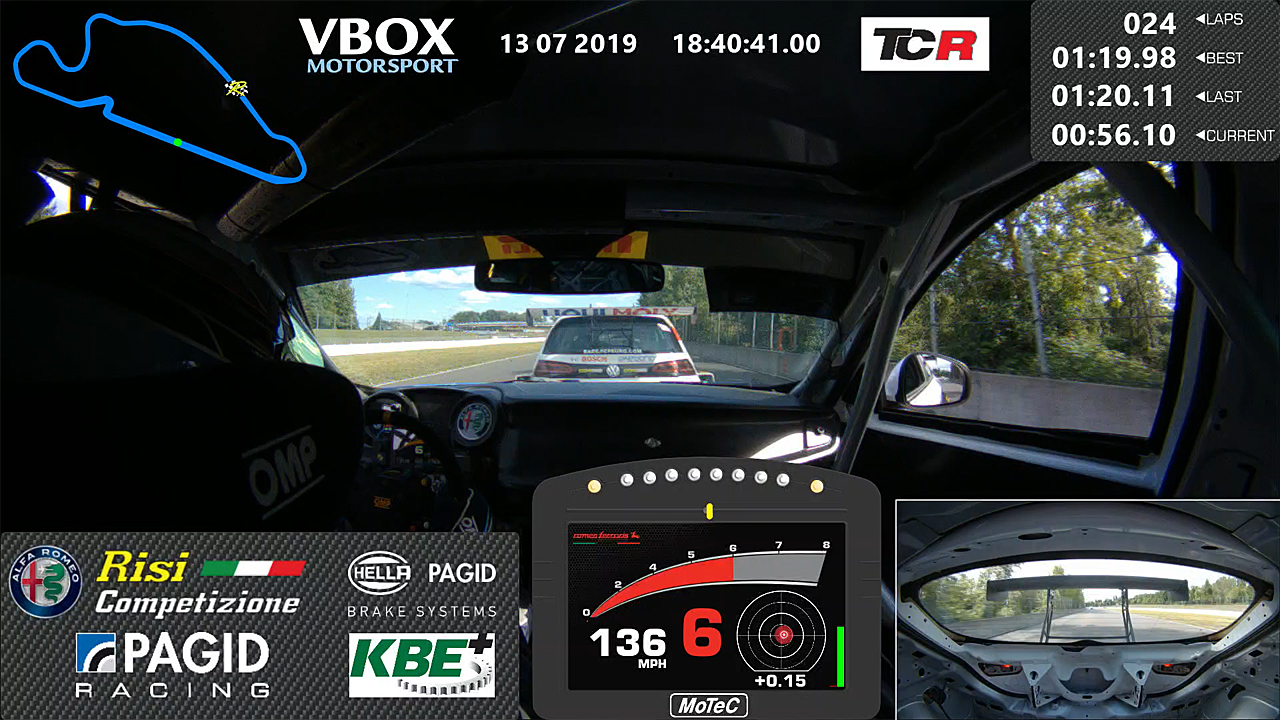 Tailgating at 136 MPH.  Don’t tell my mom.  This kind of thing makes her nervous.

Q: Did his tires eventually go off?

A: Nope.  On Lap 16 an incident on track involving a TCA car resulted in a full-course yellow.  And then for the next four laps the lead pack was able to cool their tires.

Q: That sounds like it played right into their hands.

A: Yes it did.  Just bad racing luck for us.  And to add insult to injury, to this point in the race we had opened up a gap of about 9 seconds to the #99 Honda in fifth place.  And just like that, he was right back on our tail.

Q: So walk us through the rest of the race.

A: Well, we survived the restart just fine, but again fell into a train where we had speed but no good opportunity to get around the cars in front.  And then, with one lap to go, the left CV joint failed.

A: A constant velocity joint.  It basically connects the axle to the wheel.  And if it fails, the engine isn’t able to transmit any power to the ground.

A: You could say that.

Q: Did it give you any warning?

A: No, but the broadcast booth spotted it two laps before I could feel anything in the car.  The first clue I had was with two laps to go there was an incredible amount of acrid smoke in the cockpit after braking into Turn 12.  And then again into Turn 1.  This was followed by a undesirable series of shudders and groans from the front tires exiting Turn 2.

Q: Was there anything you could do to recover from it?

A: Unfortunately, no.  I drove through Turns 3, 4, and 5 without incident, but then in the middle of Turn 6 the CV joint became a NV (no velocity) joint.  And the car unceremoniously coasted to a stop at the outside of Turn 8. 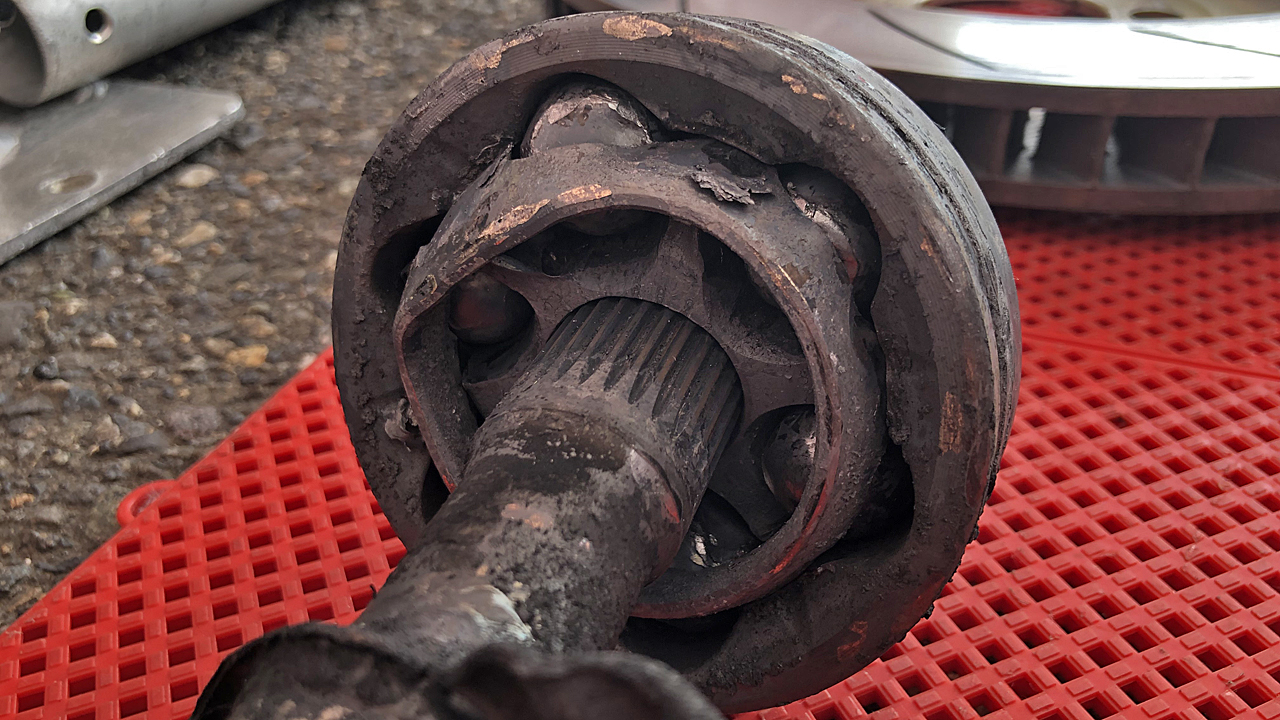 The left CV joint.  No, that’s not how it is supposed to look.

Q: So you finished in last place?

A: Yes, last place.  That’s normally what happens when your car stops moving under its own power.

Q: How close were you to the third-place car when you broke?

Q: Did you have a spare part to repair it for Race 2 on Sunday?

A: Absolutely.  And funny enough, it was an axle that we scavenged from the car that crashed at St. Petersburg.  Chassis 16 lives on as an organ donor.

Q: Is this the part of the story where you overcome adversity and shoot to the front of the field on Sunday?

A: Yes, and that was the highlight.  At the start we again got boxed out and lost a position.  We completed the next seven laps in fifth place, but maintained a gap of about 1.8 seconds to the leader.  It was incredibly frustrating running that close nose-to-tail with the four cars in front with nowhere to make a pass for position. 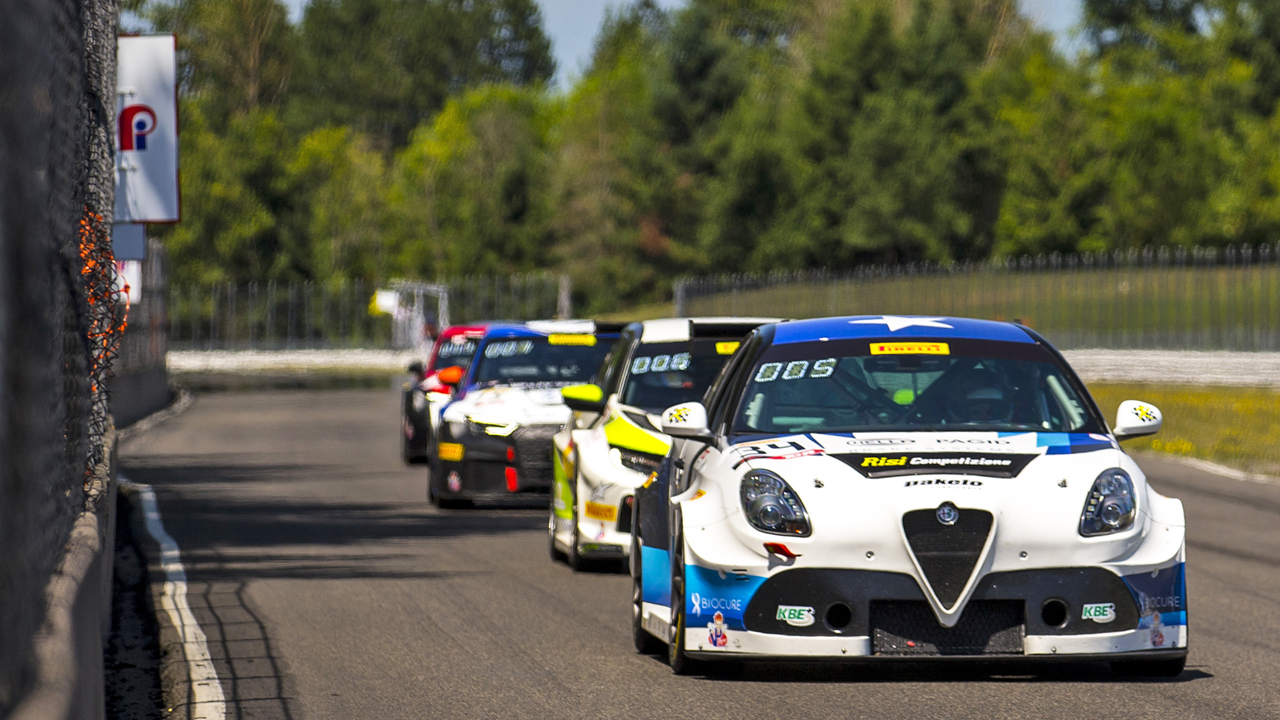 Keeping our distance from the back straight concrete walls.

A: An incident on track involving a TCA car resulted in a red flag.  And in a virtual repeat of Saturday’s script, the lead pack was able to cool their tires while parked on pit lane for 15 minutes.

Q: That sounds like it played right into their hands.

A: Yep.  And to add insult to injury, to this point in the race we had opened up a gap of over 10 seconds to the #99 Honda in sixth place.  And just like that he was right back on our tail.  Is there an echo in here?

Q: I suppose that’s how the race ended?

A: Pretty much.  When the green flag finally flew again it was a five-lap shootout to the finish.  But because everyone was on fresh tires and there’s just no great place to pass at PIR, we came home in fifth place.  Which is nothing to celebrate.  But at least the CV joint held together. 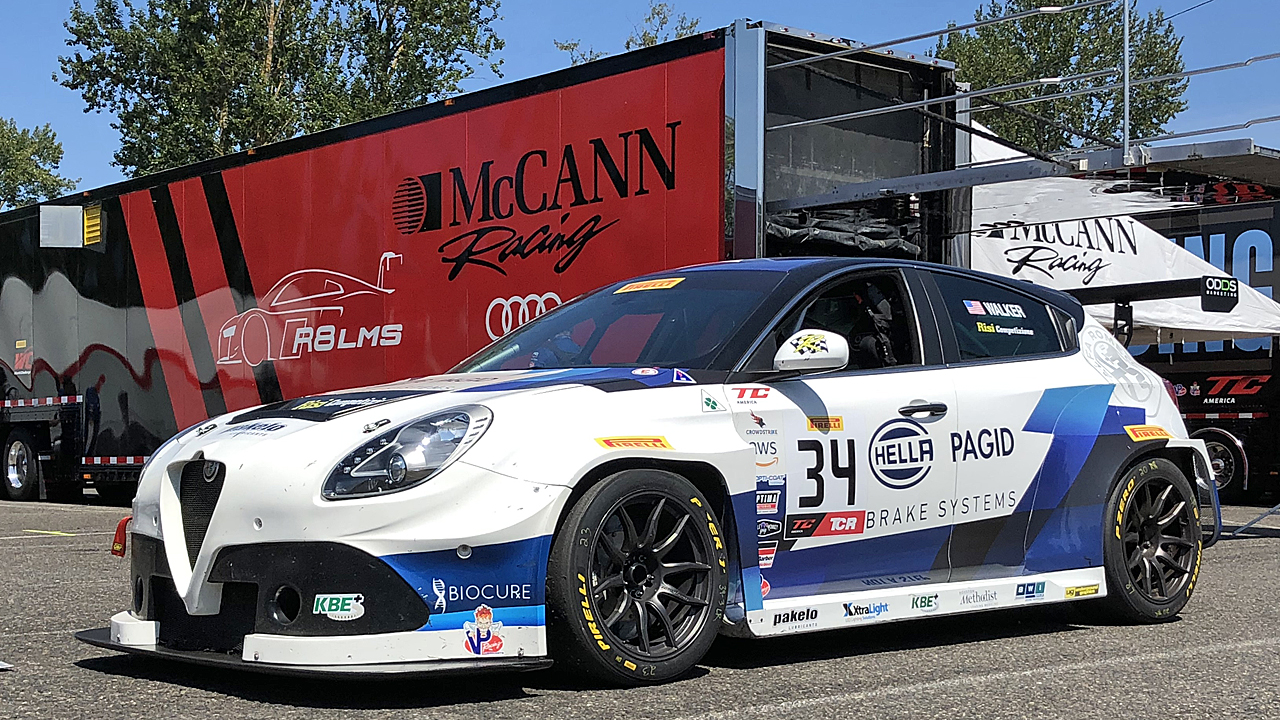 Next up: Watkins Glen.  And hopefully some home track advantage.

Q: Where does this performance put you in the TCR Championship?

A: Somehow we are still in third place overall.  But we need to move this car up the finishing order ASAP.  Our lap times are now in legitimate contention for the pole and our race pace has evolved such that we are no longer getting left behind at the start.  All we need are 40 solid minutes of racing and we should find ourselves spraying champagne once again.  But I won’t lie – this is hard work and our competition knows what they are doing.

It’s not going to be easy, but all of the pieces are finally coming together.  It’s just a matter of time now.  We can’t wait for Watkins Glen.