This update finds us in mired in the second half of our incredibly compressed 2021 GT4 SprintX season. Thanks to the cancellation of Mosport back in the spring, we had a twelve-week hiatus between our fiasco at VIR (boo!) and our resurgence at Road America (yea!). We now are running as fast as we can to complete our final four events of the season, all of which are crammed into a seven-week window.

An unfortunate side effect of all of this is that there simply isn’t time between races to cultivate a proper newsletter (boo!). But, on the bright side, I think we are going to take a break from the motorsports Haiku until further notice (yea!).

I’m also taking the liberty of changing the format of this newsletter. I am sure that the Q&A routine will return at some point, but I’m going to let the pictures do most of the talking this time around. And we have a lot of good pictures to share.

Let’s start with a Walker family portrait from our weekend at Watkins Glen, because that really sets the proper tone. 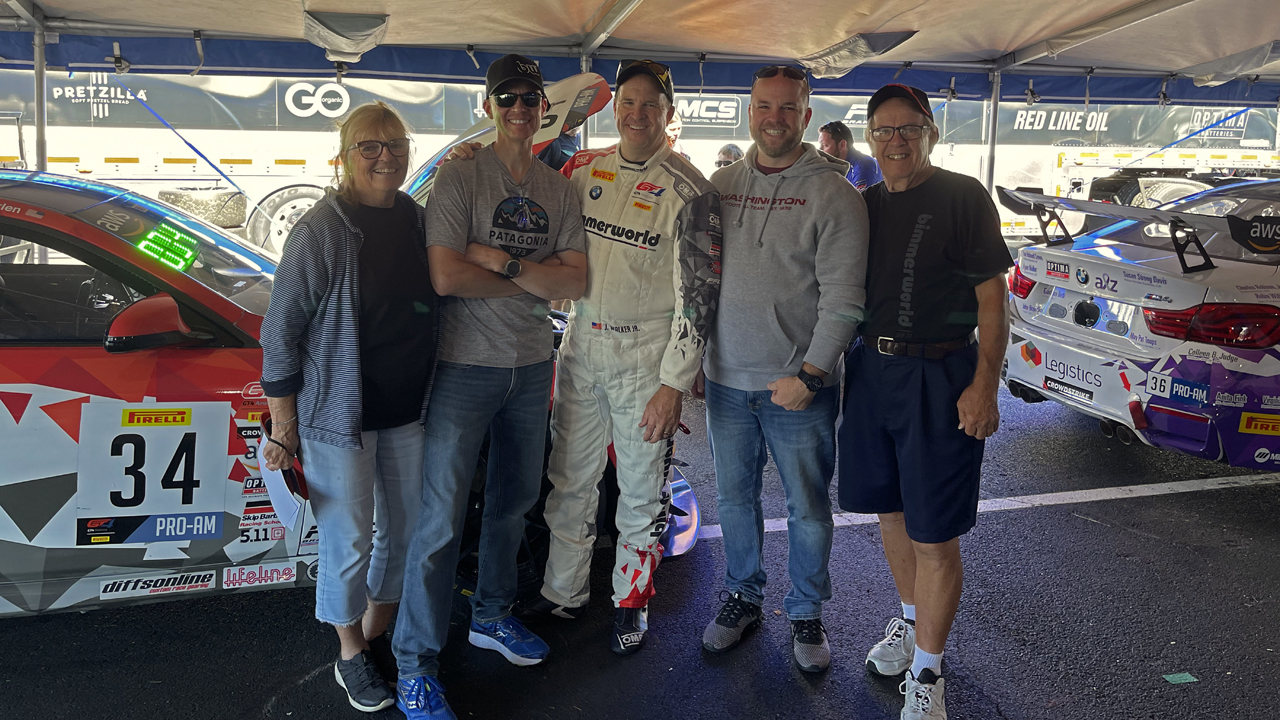 Don’t let my mom’s smile fool you. She still hates that I do this.

Photo credit here goes to one of about 10 iPhones that were deployed for this awesome shot. One of the great joys of racing at Watkins Glen is that so many friends and family are able to come out and share in the excitement with us. This time was no different, as the paddock was teeming with fans, followers, and vintage team scR T-shirts. But the icing on top was that this was the first time in my racing “career” that my entire family was gathered in the stands together. Only took 24 years to make that happen! This made for a special moment every time I came around Turn 10 knowing they were up there cheering on #34 in unison. 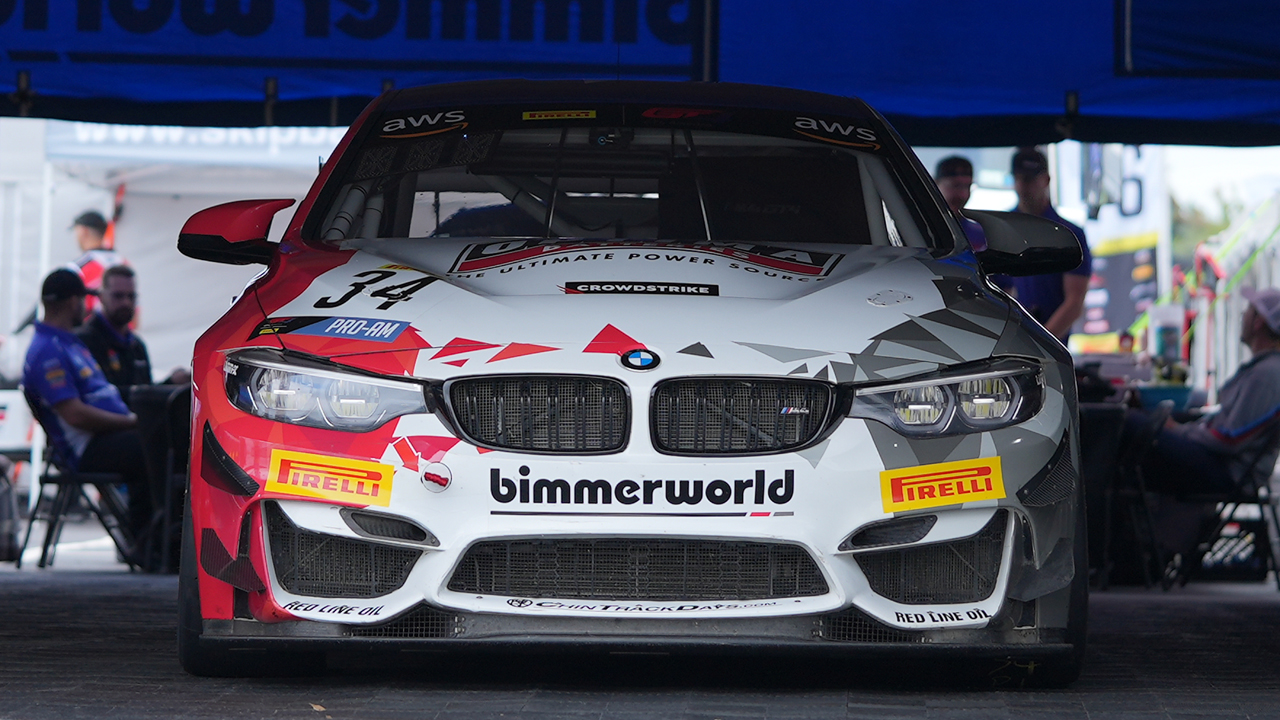 Taken at some point before I crashed on Saturday morning.

If that’s not a teaser caption I don’t know what is. Can you feel the tension building? 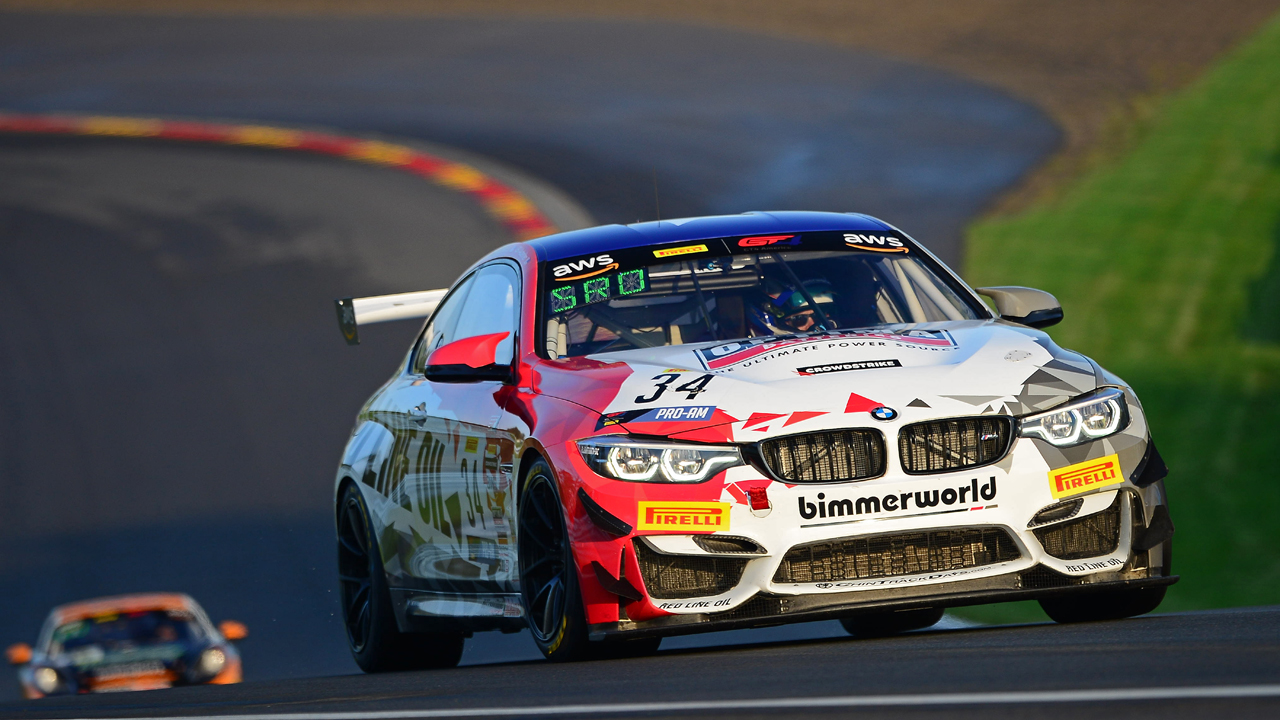 Friday was our practice day, and the car was hooked up. Bill and I both consistently put down lap times toward the front of the grid. If you want to peruse the timesheets for yourself (I know a few of you are weird enough to want to do that), you can find Friday morning here and Friday afternoon here. Between the great weather and the solid on-track performance, we were all feeling pretty good about qualifying the next morning. 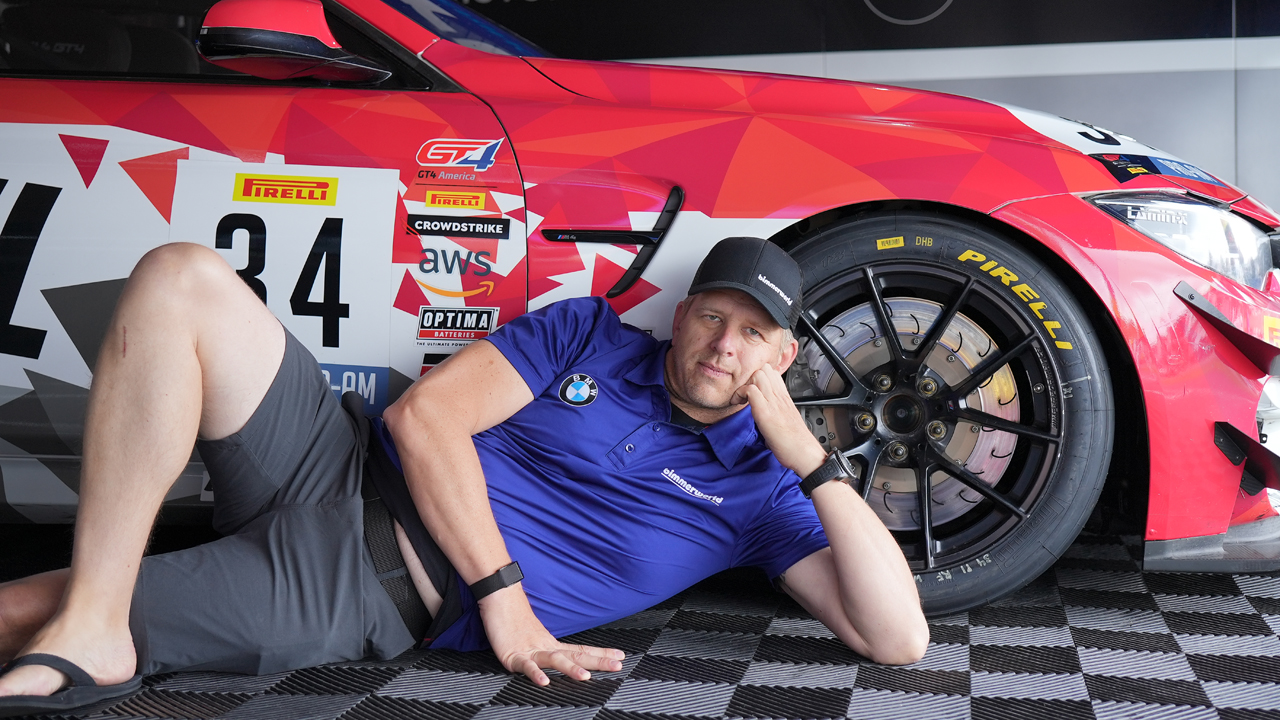 I really can’t explain this. But once you see it, you can’t unsee it.

BimmerWorld is currently taking orders for its 2022 GT4 SprintX Team Calendar. Owner James Clay was caught above posing for the cover. Make sure you get in line now, as they will surely sell out before the holidays are upon us. 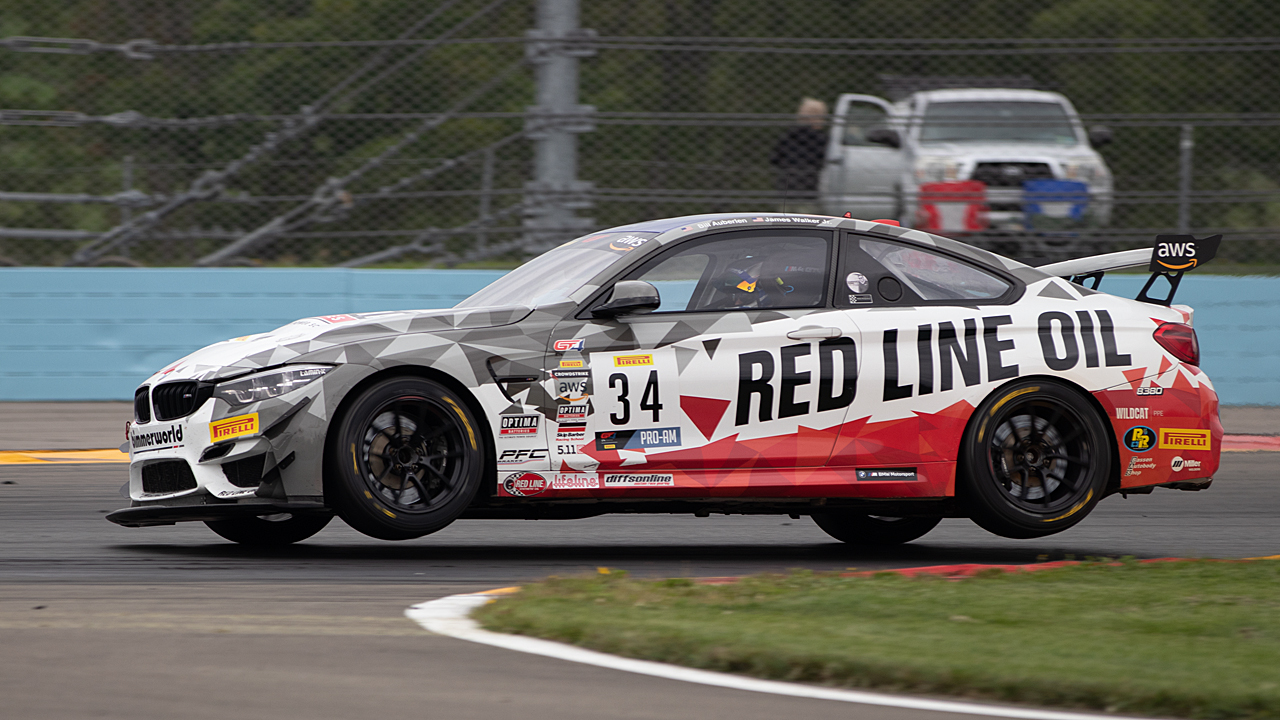 Mad photo credit to my brother-in-law Tim who captured this awesome shot.

At the end of Watkins Glen’s long back straight is a chicane known affectionately as the Bus Stop. It is composed of four separate raised and painted aprons and is designed to slow us down before entering the Carousel turn. Now, slowing down here is a relative term, as our speeds through the Bus Stop are still around 100 MPH as we accelerate towards the exit. It’s one of my favorite features of this historic track, as carrying the proper speed requires courage and commitment.

Oh, it’s also a great place to crash your car in qualifying the next morning. 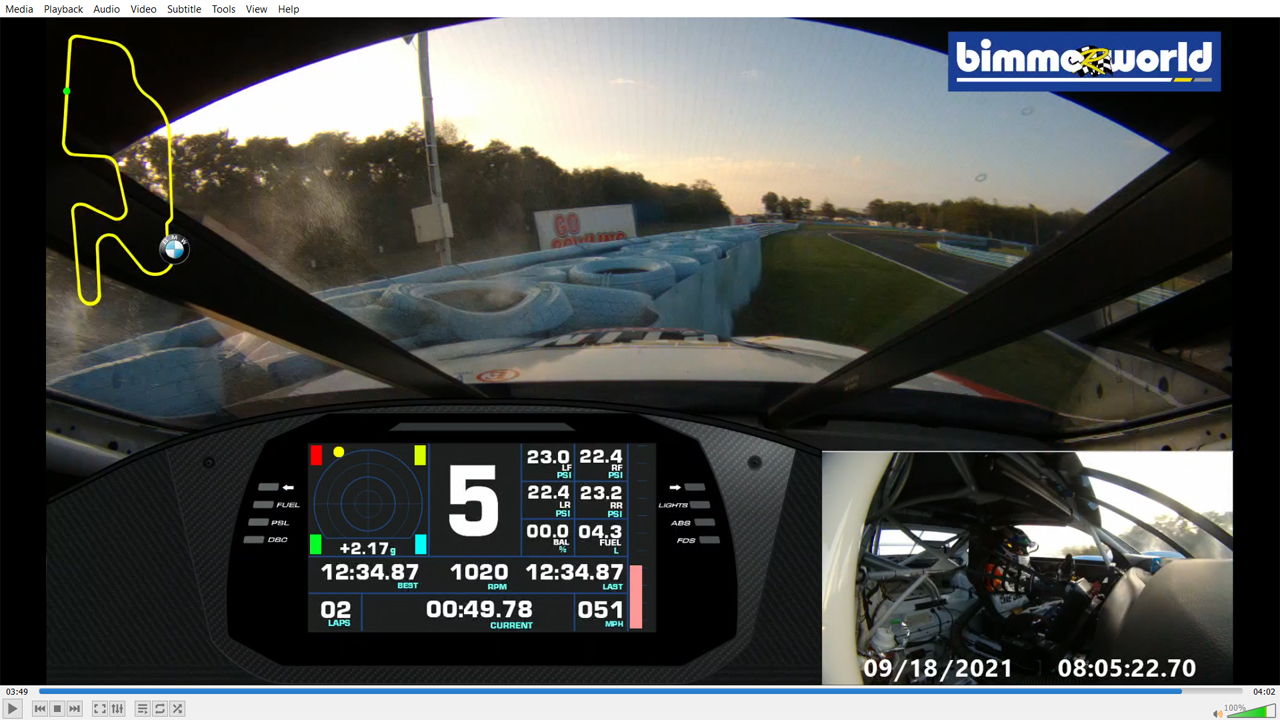 This is me crashing into a tire wall at 50 MPH. Yes, I closed my eyes.

For the fourth time in three events, the track was wet for qualifying on Saturday morning. Because the tribal knowledge was that dry tires would be the proper choice on a drying track, that’s what we did. And I’m not convinced that wasn’t the right call, but I clearly did not respect the lack of grip that pervaded the circuit that morning. And when your confidence exceeds the available traction, it usually results in a trip back to the paddock on the back of a wrecker. 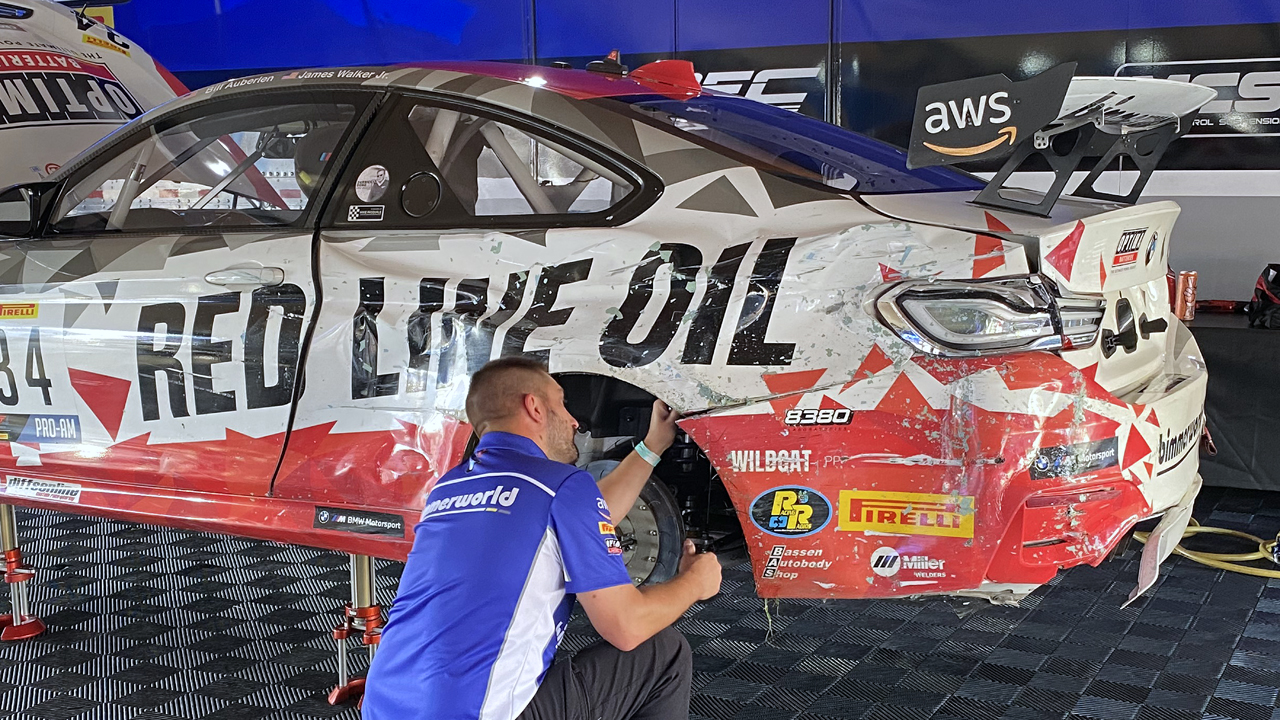 This is Daniel silently cussing me out. I don’t blame him.

Because I wrecked on my very first timed lap, I was unable to post a qualifying time. And because the car was on the back of a wrecker, Bill was unable to qualify either. For this reason, we were relegated to starting last for both of our races.

When the results were posted, we were gridded 29th on Saturday and 32nd on Sunday. This was not exactly the way it was supposed to play out. 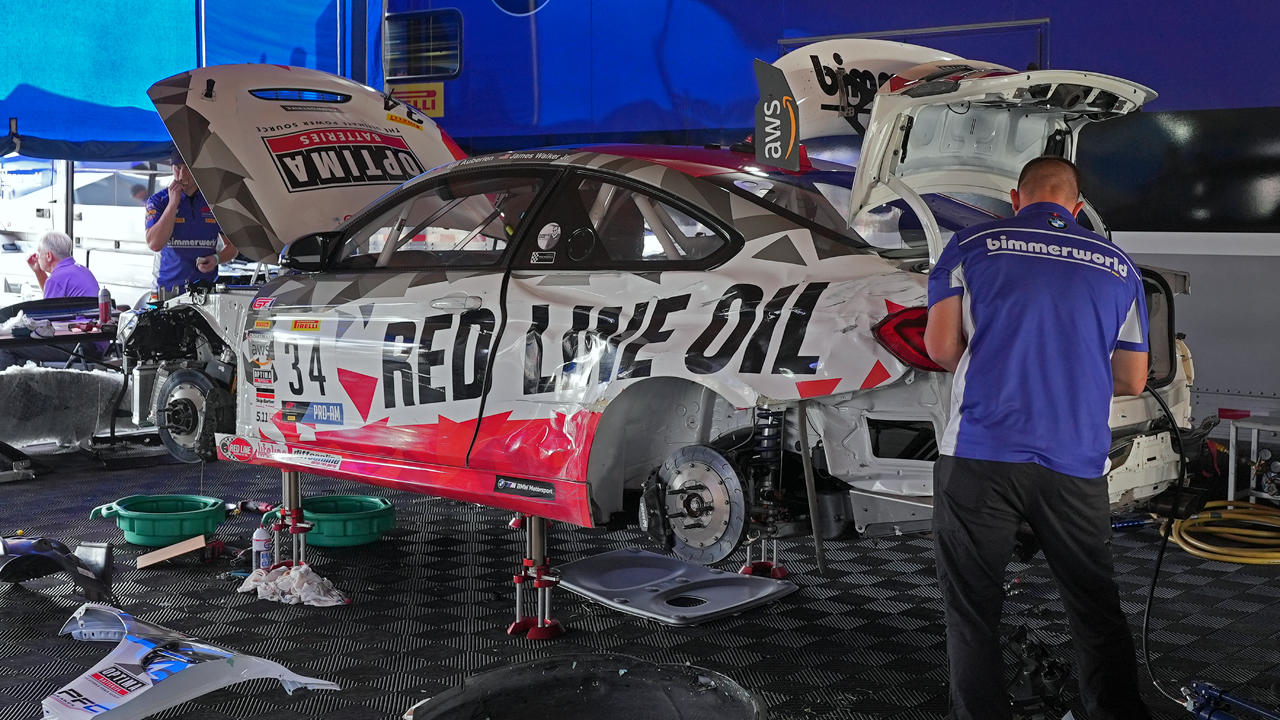 This is Daniel an hour later. Probably still cussing me out.

Because I conveniently chose to crash about two hours before our race was supposed to start, the crew took me off their Christmas card list. It was a flurry of activity to figure out what was bent, what was broken, and what could be left alone. I had effectively taken out the rear fascia, the rear quarter panel, the front fender, the front fascia, the front splitter, the rear taillights, and several expensive-looking metal gizmos that I am sure will be properly identified when I get the repair invoice next month. 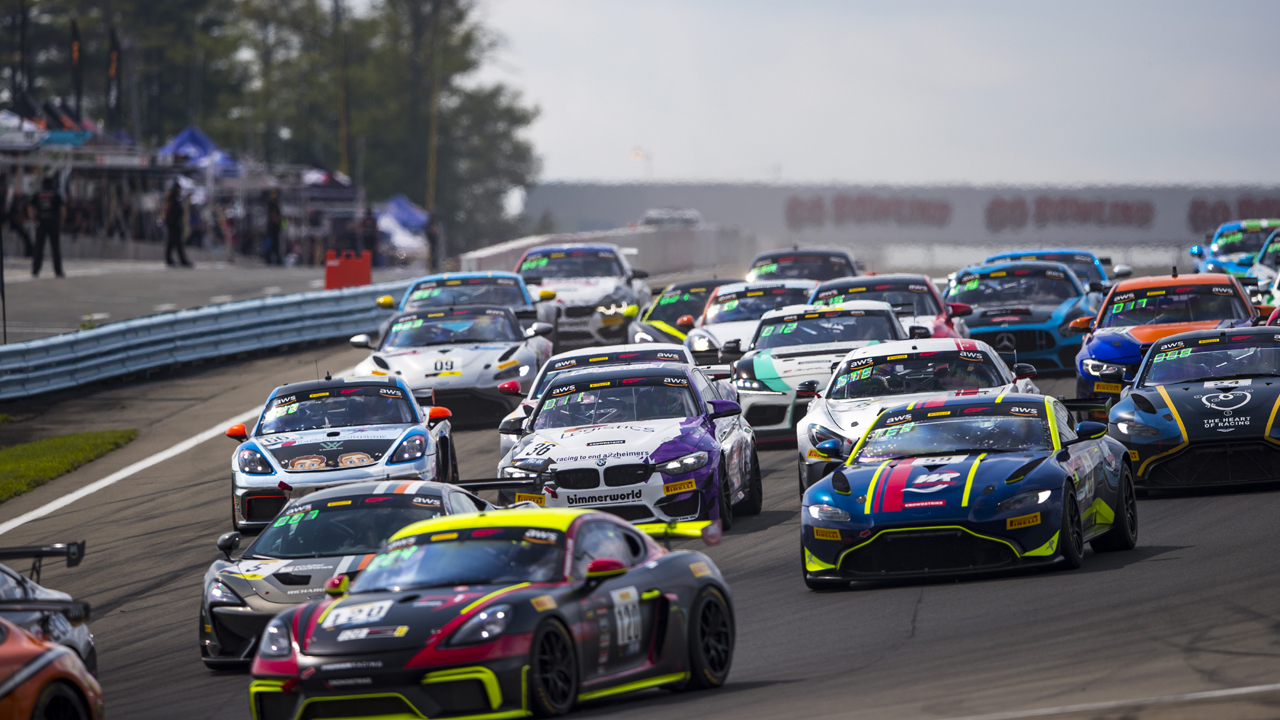 This is the start of Saturday’s race. No, you really can’t see me too well. But I’m there.

It wasn’t easy, but the crew did a phenomenal job getting #34 buttoned up well enough to take the green. With less than 30 seconds to spare (I’m not exaggerating, it was that close), I rolled to the grid for Saturday morning’s race not really knowing if the car was completely happy or not. When the race began, it was anyone’s guess just what we would find. 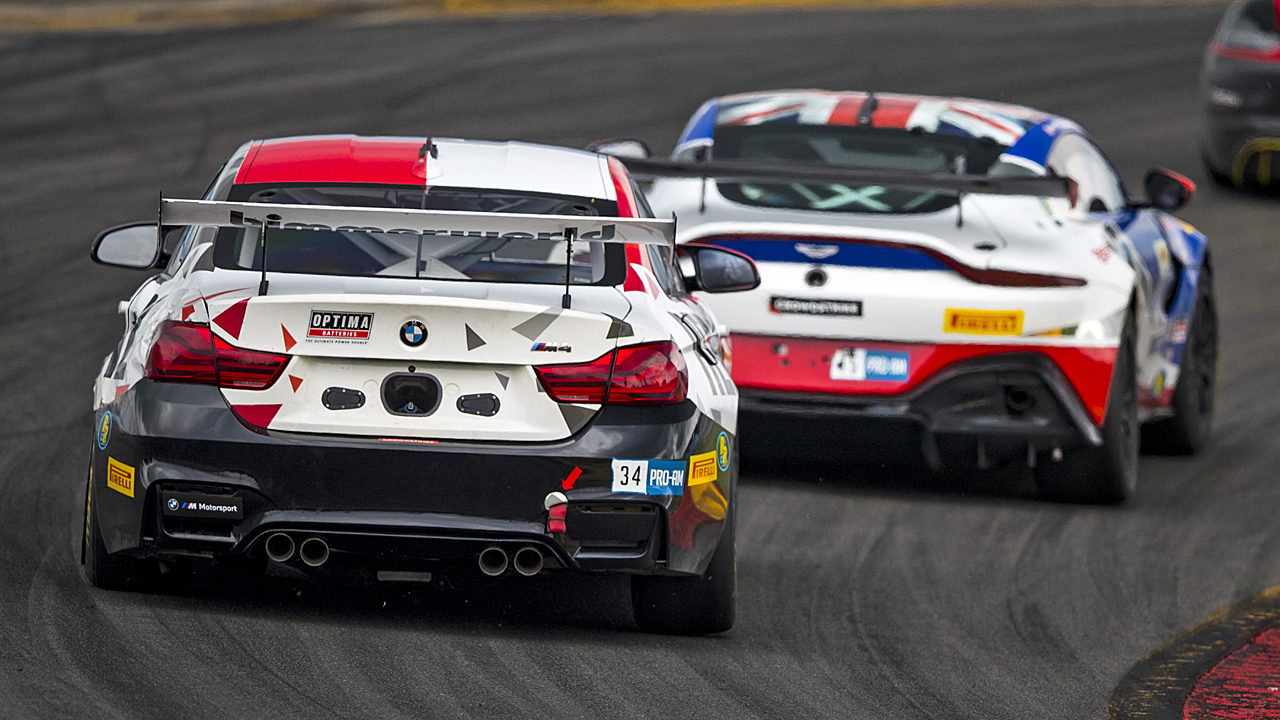 The black rear fascia looks kind of menacing, doesn’t it? I say we keep it!

What we found was that the car was happy. Not beautiful, but happy. 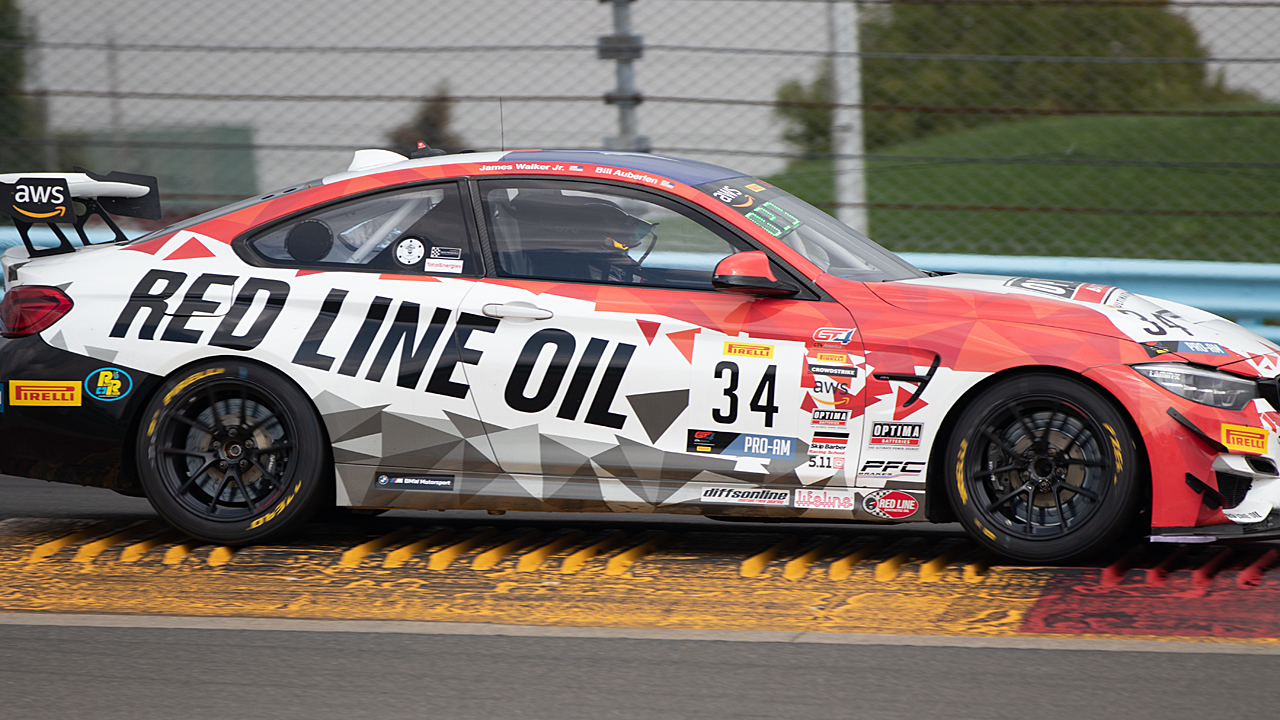 Using all of the track. And all of the photo sensor. Another great shot, Tim!

As you might recall, I started the race in 29th place. But the car beneath me was happy and I was focused on making amends for my miscue earlier that morning. And at the risk of being overly dramatic, it was one of my best drives of all time. Over my 12 laps I made up 15 positions, handing the car over to Bill in 14th place overall. Not exactly redemption, but it was a proper effort. 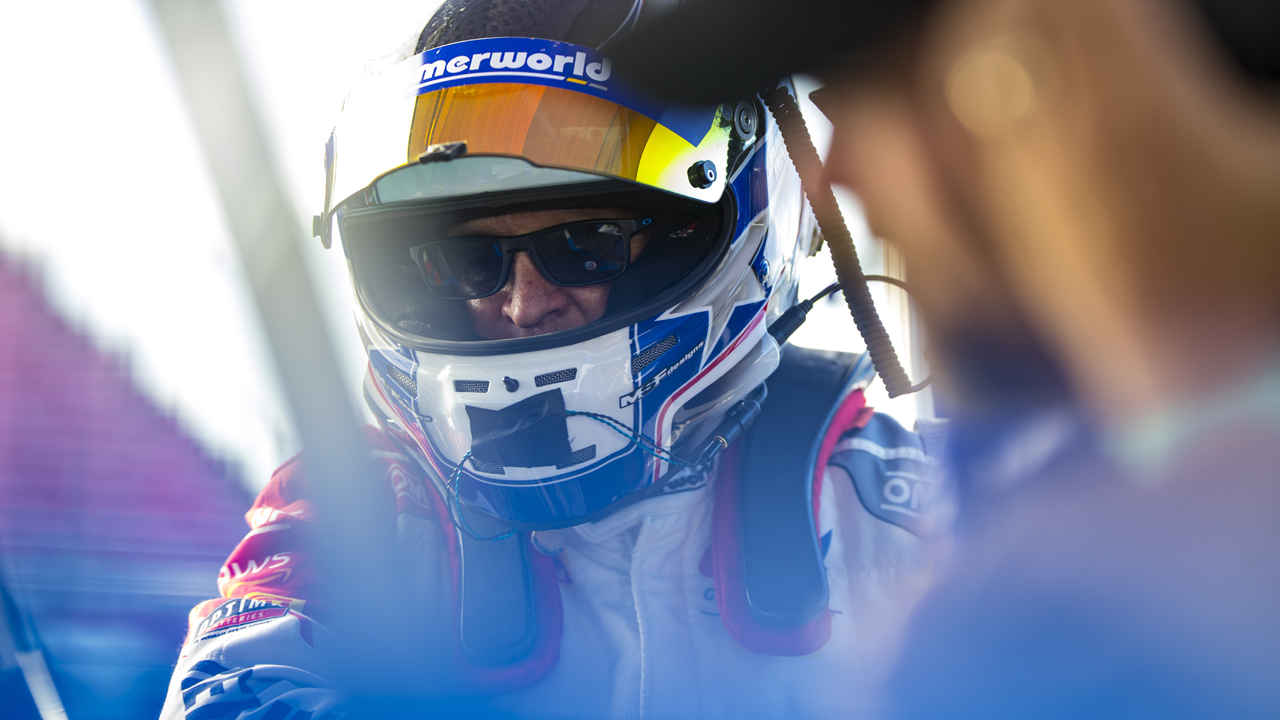 Catching a breath moments after exiting the car on Saturday.

Bill picked up where I left off, but with only 30 minutes left to go in the race there was only so much he could do. Without the benefit of a double yellow flag to bunch up the field (a first this season, I think?), there simply wasn’t enough time on the clock for him to work his magic. That said, he put on a heck of a show to move the car up to 8th overall and 7th in class. And while that doesn’t sound sexy, we were in the points after being on the back of a wrecker just three hours earlier. Hats off to the crew for getting us to the dance on time. 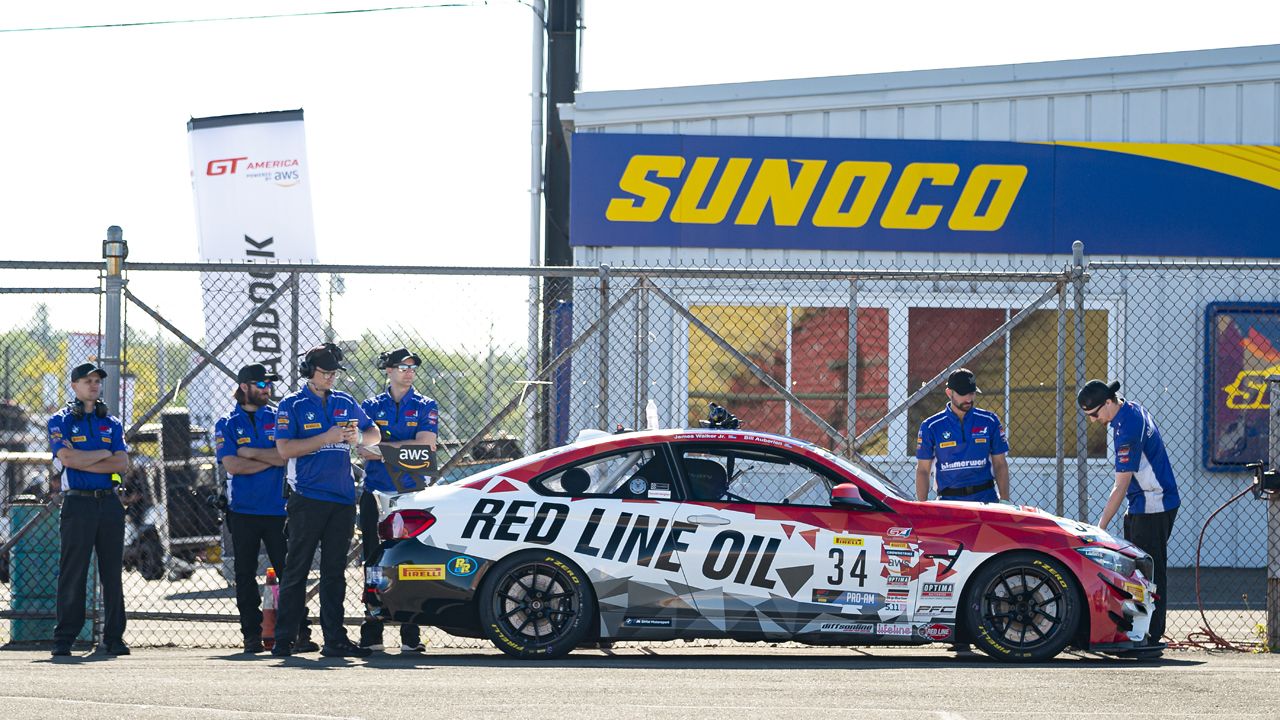 Sunday morning was a bit more relaxing on the grid for the crew.

Following the race on Saturday, the crew had the opportunity to go properly over the car with a fine-toothed torque wrench (see what I did there?) to make sure that it would still be happy on Sunday. Thankfully, it needed only minor adjustments despite my best effort to knock it out of whack. 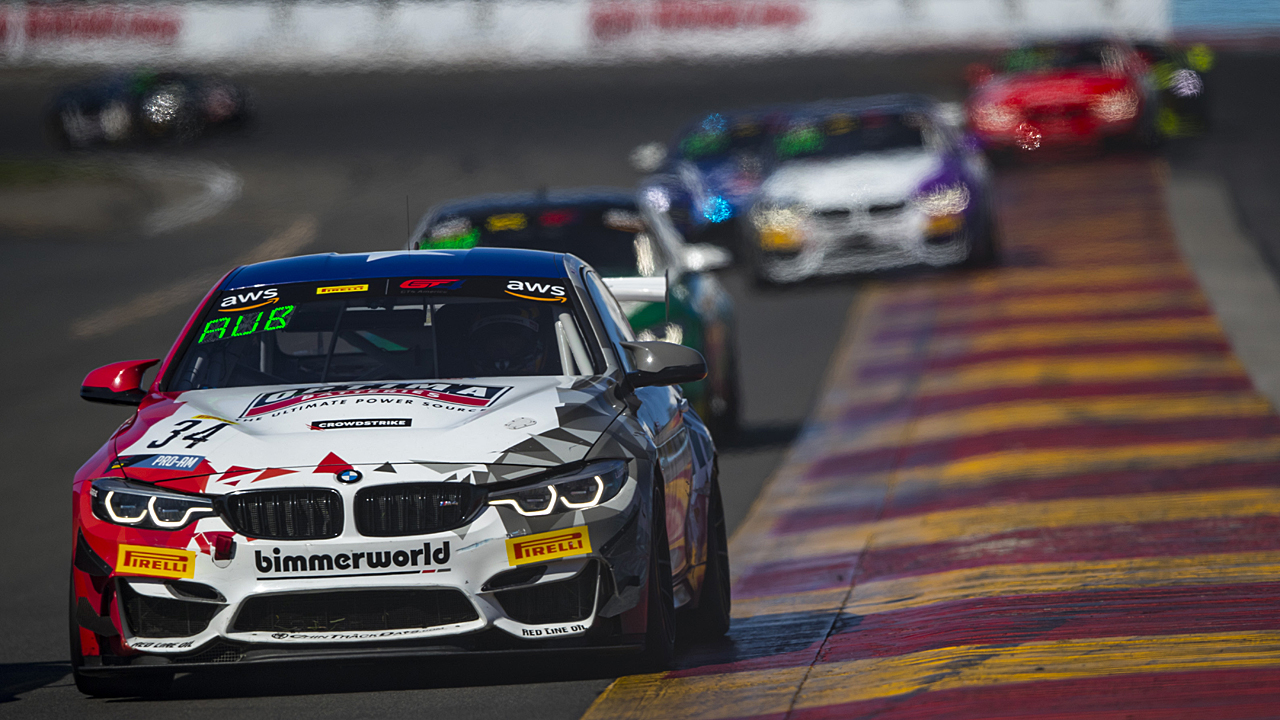 Here’s Bill on a tear (which is most of the time now that I think about it).

Bill started Sunday’s race 32nd overall. Which, in retrospect, was perhaps a great motivator. He drove 15 laps with his proverbial hair on fire, handing me the keys (that’s a metaphor, the car doesn’t actually have a key) to a car sitting in 9th place overall. That’s 23 cars he dispatched for the math impaired. 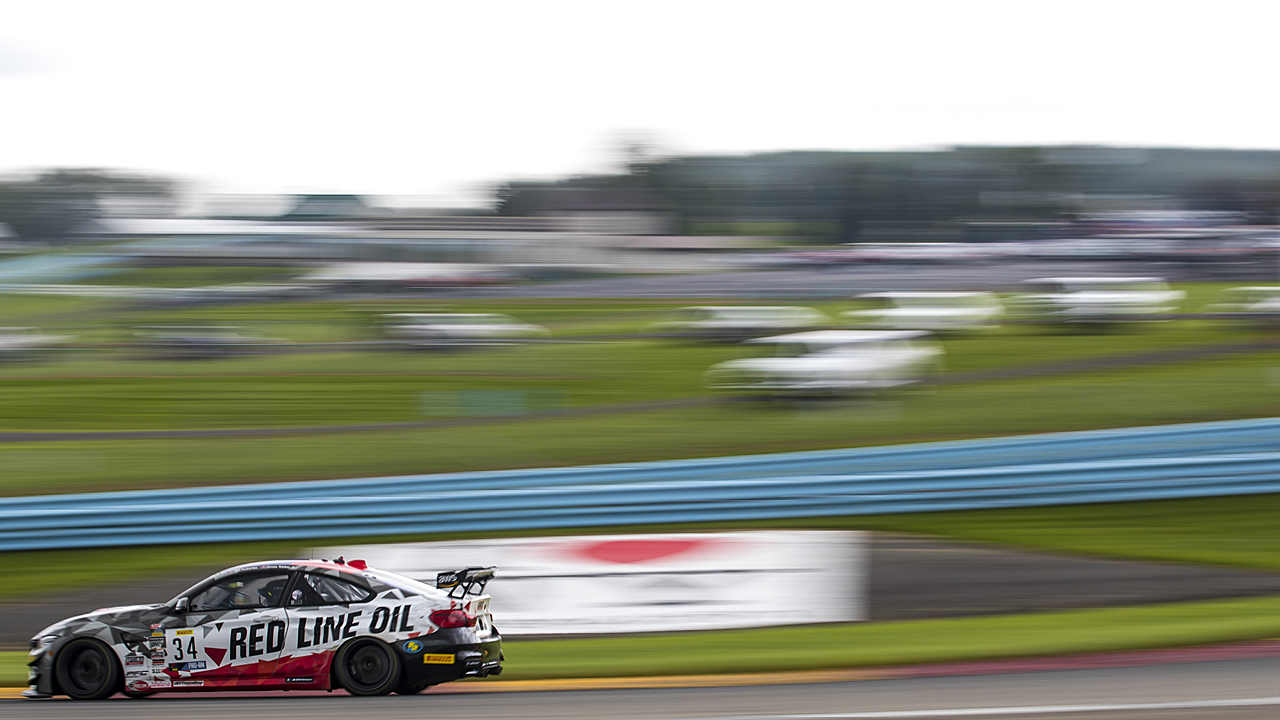 I like this shot simply because you can’t really notice the crushed rear quarter panel.

Although I didn’t get a particularly good run out of our pit box, and I fell back slightly as I merged back onto the track, the car was obviously ready to move through the field. Bill had left me plenty of tire, and thus we went to work. Over the next five laps we moved from 9th overall to 5th overall, and advanced to the point that we were less than one second behind the race-leading Pro-Am car being driven by Bryan Putt (he’s the old guy, remember?). With about ten minutes remaining in the race, we were definitely in a very, very good place.

Unfortunately, as soon as we had caught the leader, a major crash occurred on the back side of the track. The double yellow flags came out and thus ended any opportunity to make an awesome pass for the win in front of the home crowd. But second place is second place, and I’m not going to pout about it. 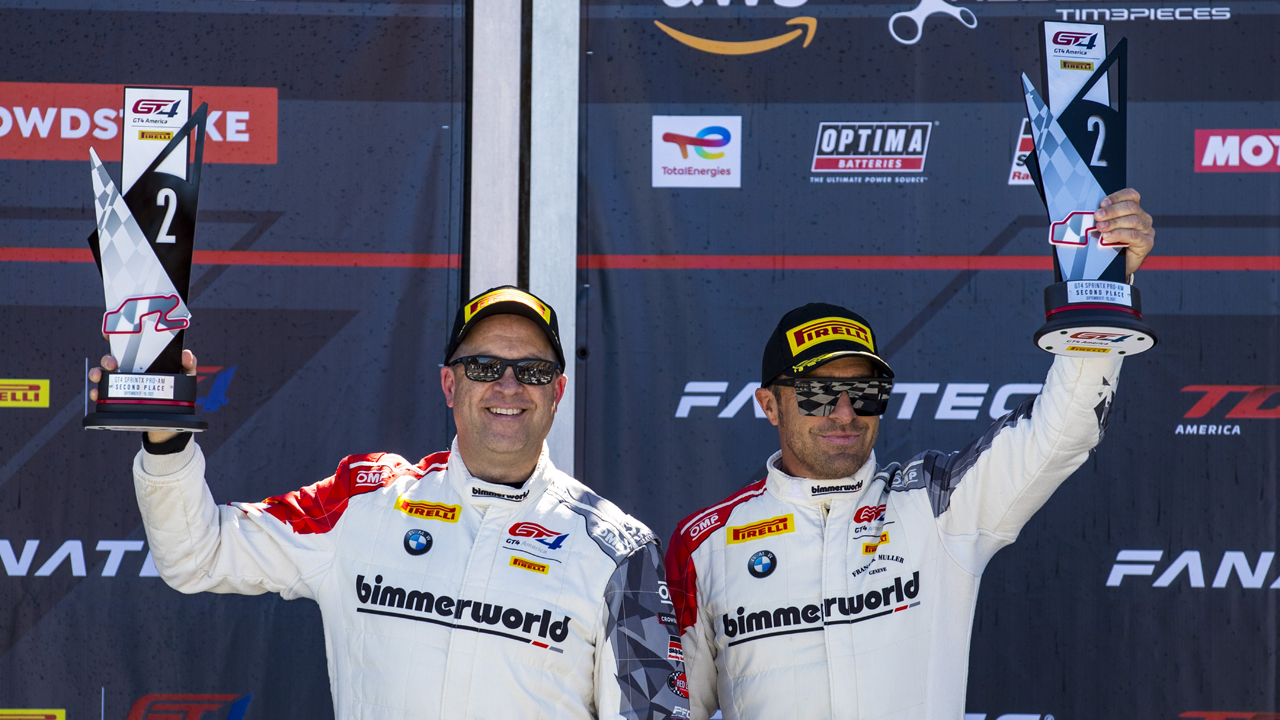 Maybe I will figure out how to rock sunglasses like Bill someday. But I can’t do the lip thing.

In the heat of the moment, moving through the field from 32nd overall to 4th overall felt like a win. Everyone got a taste of the champagne back in the trailer for a job well done. Our solid performance moved us up in the championship standings once again, but fifth place isn’t all that much to be shouting about. At this point in the season, it’s now simply about winning races, and the year-end points will tally how they tally. 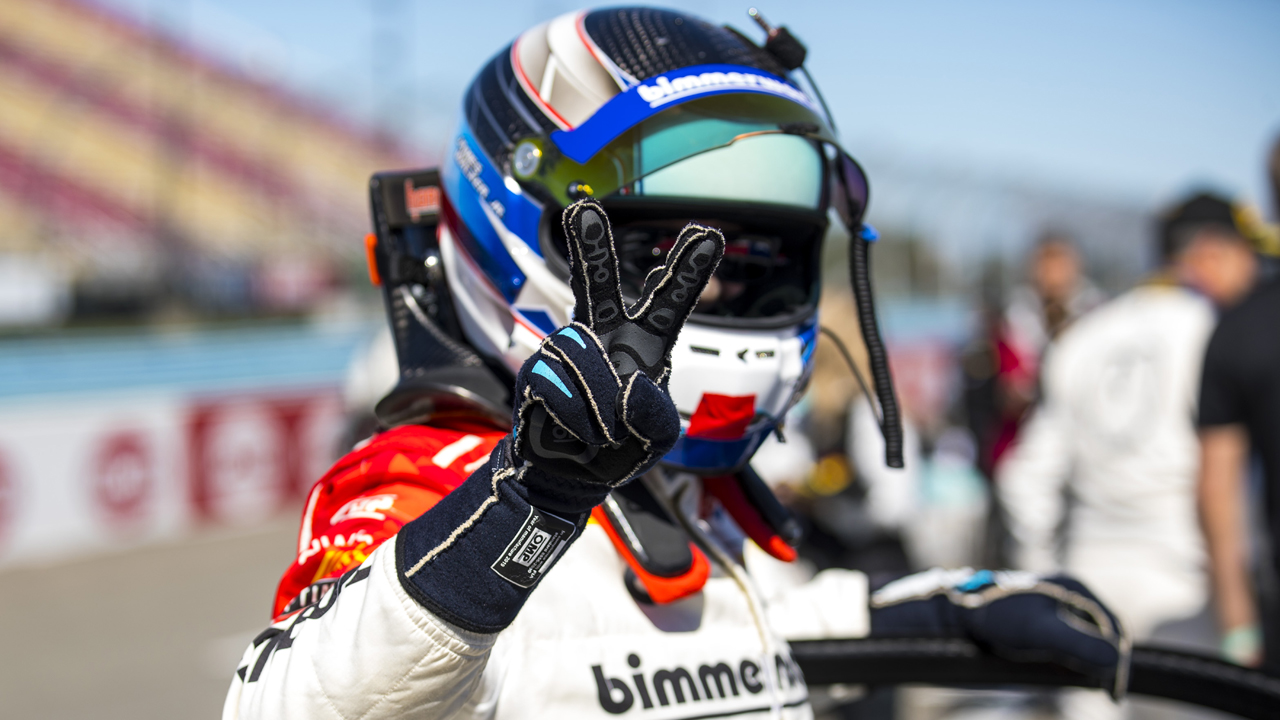 But now, on to the next. The car is already back from the body shop and on its way to Florida for round six at Sebring International Raceway. Bill first won at Sebring more than 25 years ago, but that is nicely offset by the fact that I have never been to the place. We race this coming Saturday at 11:00 AM and again on Sunday at 10:30 AM. Those times are local in Florida, so if you live in a different time zone, you have to do some adjusting to consider if you are planning to watch us live.

Note that if you are reading this newsletter at some point in the future, well, this information will be essentially useless to you. 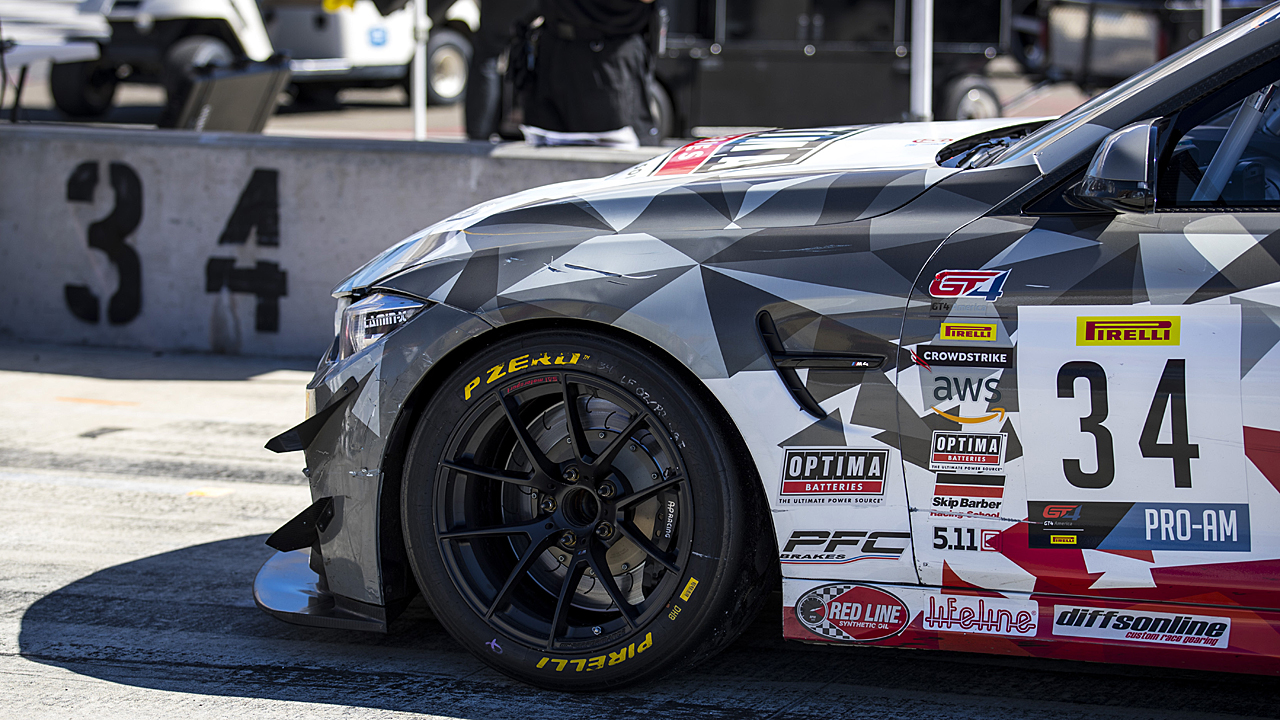 Symmetry. And a tired, but happy, racecar.

Q: Back up a bit. Can I really buy a calendar with James Clay on the cover?

A: No. That was a joke. But if we get enough interest, who knows?