Before reading this newsletter, please make sure that you wash your hands. And disinfect the keyboard. And don’t sneeze unless you are wearing a mask. And even then, don’t sneeze as it has become socially unacceptable to do so.

What a remarkable past eight weeks! Like the rest of the world, the racing community has been turned upside down by social distancing. So, while you are holed up at home in your pajama pants, here’s the teenager’s latest scR update to humor you along for one more day. Note that he wrote this in the days just following the race back in early March, so some of the forecasting might be a little off. But it’s always fun to see what he takes away from a race weekend. I hope you enjoy it.

In other news, both our race at Long Beach (April 17-19) and our race at Lime Rock (May 8-9) have been canceled. The current plan is that the season will resume with the race at VIR on June 5-7, but your guess is as good as mine as to what the state of things will be at that time. In any event, stay home, stay healthy, and stay tuned. We will be back on track eventually, and look forward to sharing the adventure with you. After you wash your hands, of course. 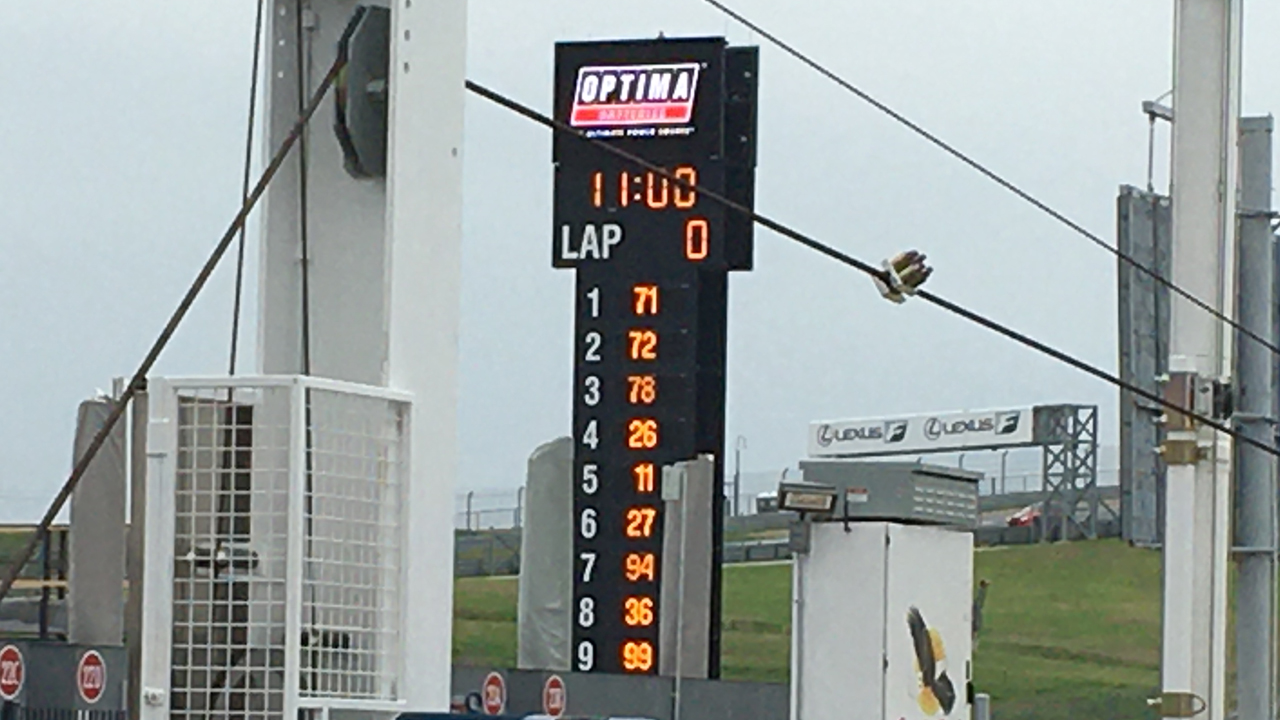 Against all odds, yes, they are. We will no longer see them on track, but they can be found a few trailers down from the BimmerWorld truck, with their big blue tent, their two cars, and their ever-present free swag. Their terminology, not mine. 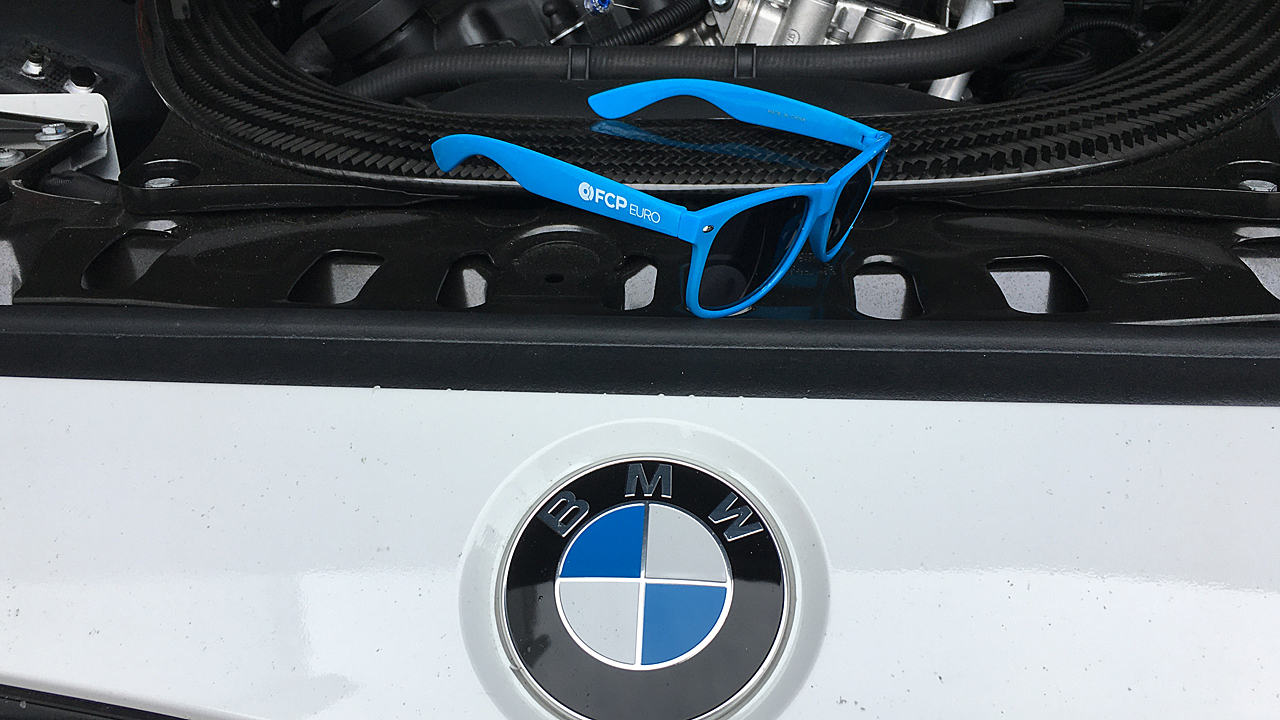 Did you just spoil The Rise of Skywalker for me?

No. Do you know how many bad guys there are in Star Wars? 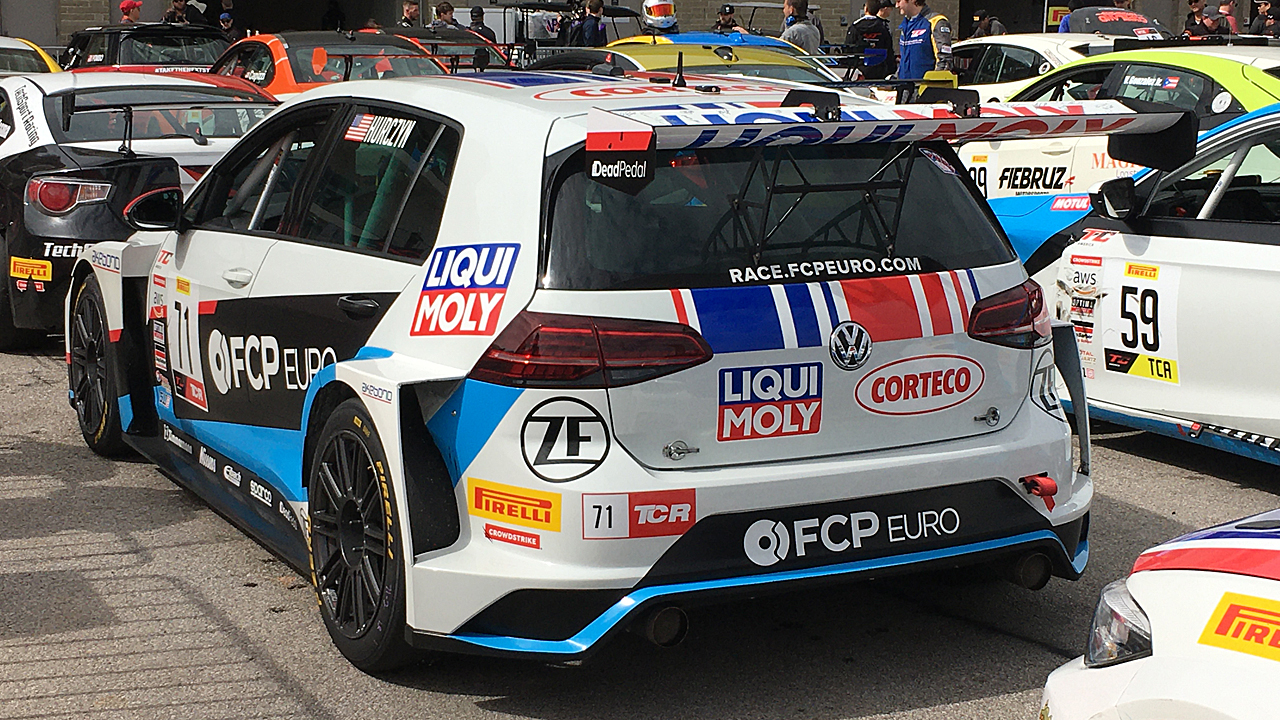 Michael Hurczyn’s car, feeling lonely without the #72 by its side.

So you got some free sunglasses to go along with your stickers?

I did [dad edit: and he wears them EVERYWHERE]. However, the free sunglasses don’t even compare to the BimmerWorld swag table. 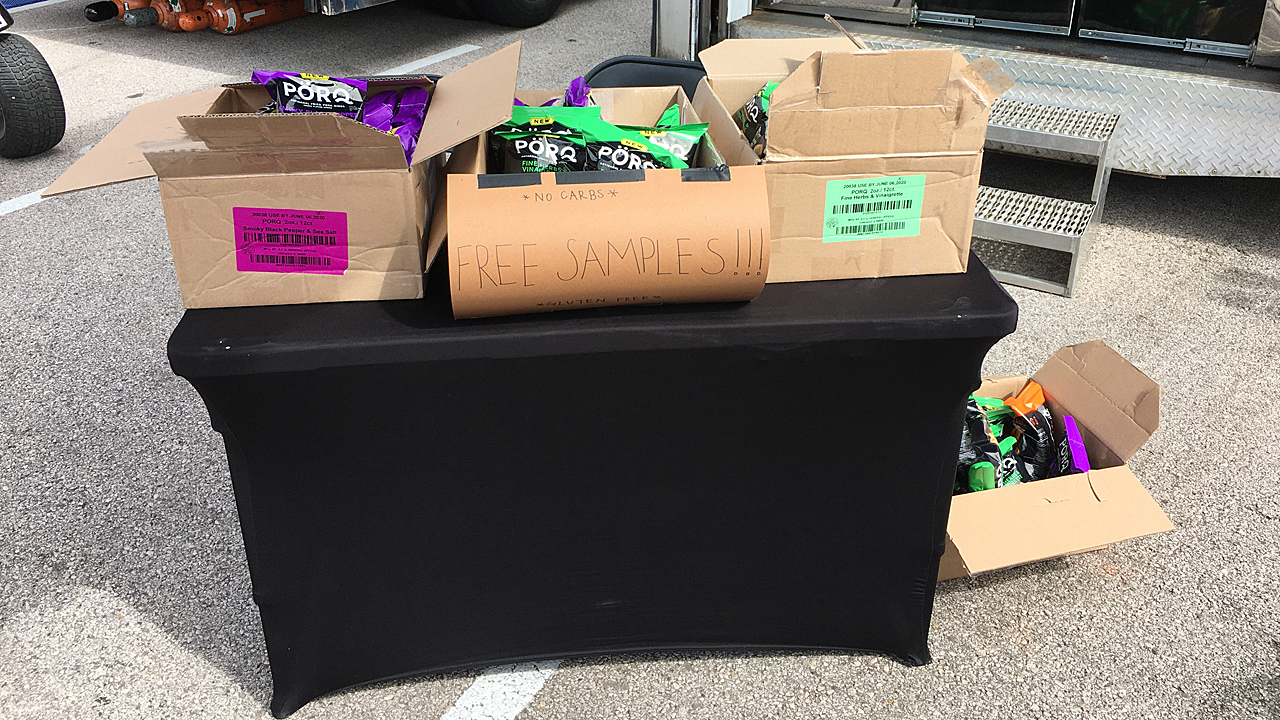 Uncle Pat sent me no less than eight puking emojis after seeing this picture.

Free pork rinds? What kind of race team promotion is that?

Excuse me, dear reader. They are not simply pork rinds. They are PöRQ Snacks, a new line of artisanal pork rinds by Benestar Brands, the world’s largest pork rind manufacturer. PöRQ Snacks are made with the highest quality ingredients and come in Herb & Vinaigrette, Black Pepper & Sea Salt, and BBQ & Chipotle flavors.

PöRQ Snacks is the main sponsor of James Clay’s car, which is one of BimmerWorld’s two entries in the TC America series this year. The PöRQmobile actually won its race on Saturday and then finished third on Sunday. It was a win for fans of pork rinds everywhere. 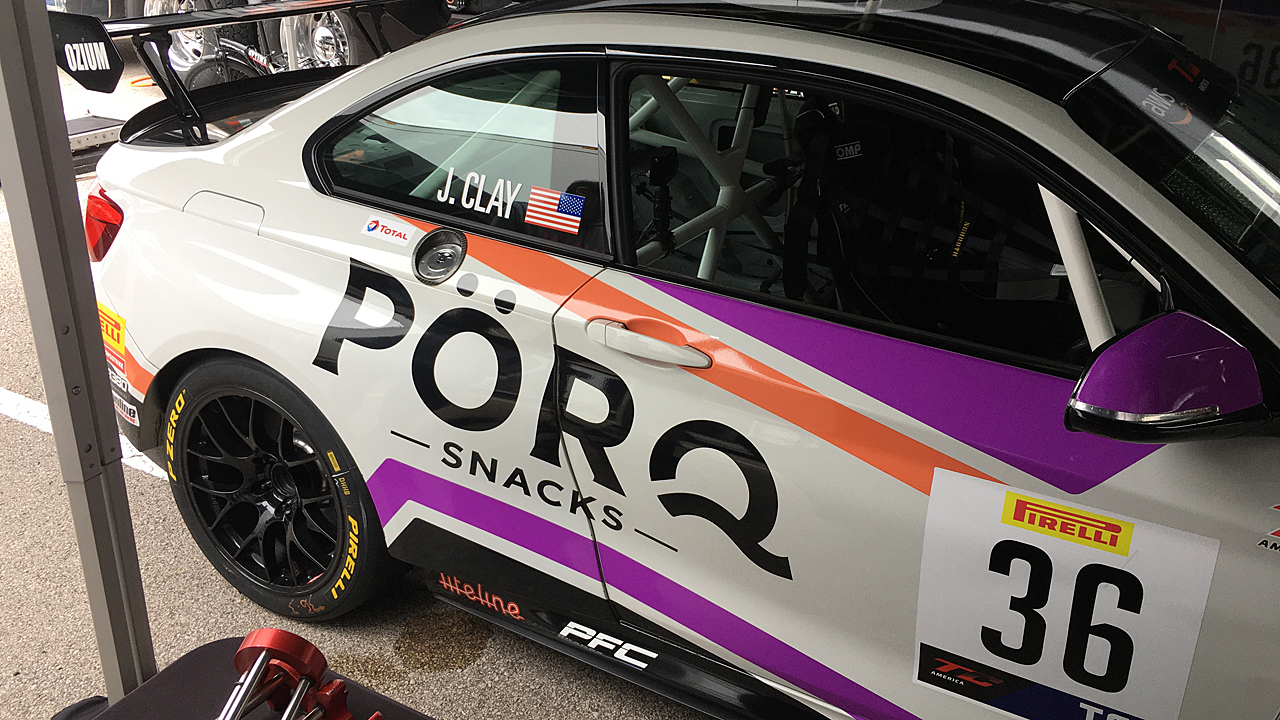 This is professional road racing, brought to you by dead pigs.

Did the VW BrosTM win their race, as per usual?

No. In a stunning turn of events, the VW BrosTM have been kicked down to third and fourth, at least this weekend, by a new set of twins. It’s the Veloster BrosTM, everybody! No matter how many races they win, they will never be as good as the originals. 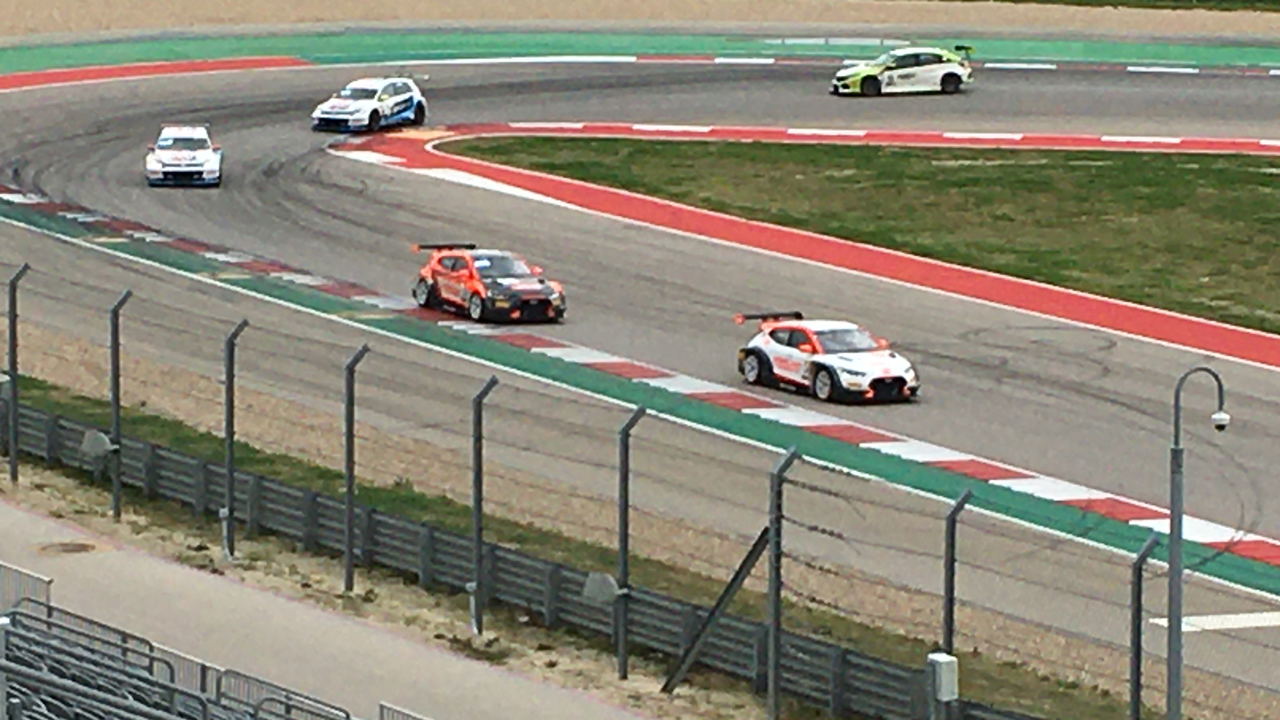 It’s probably in the pits with random mechanical issues.

So there’s only five TCR cars this year?

No, I was kidding. There is an Alfa, and two other Civics. The Alfa spent most of its race alone in 6th, and finished there. With a Texas flag on the roof it could have easily finished 5th or higher. 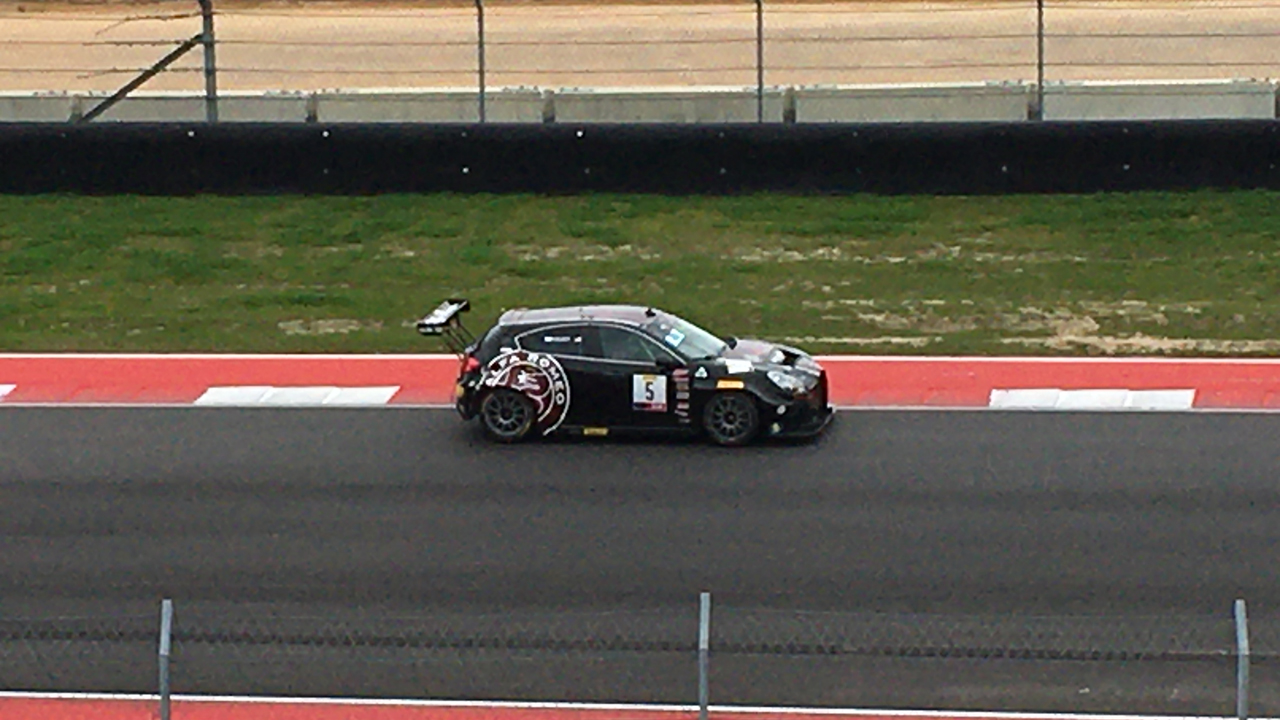 Did Victor Gonzalez spin in turn 1?

That’s mean. Yes, he did. Only in one race, though. And at least one of his Civic buddies joined in the fun this time. 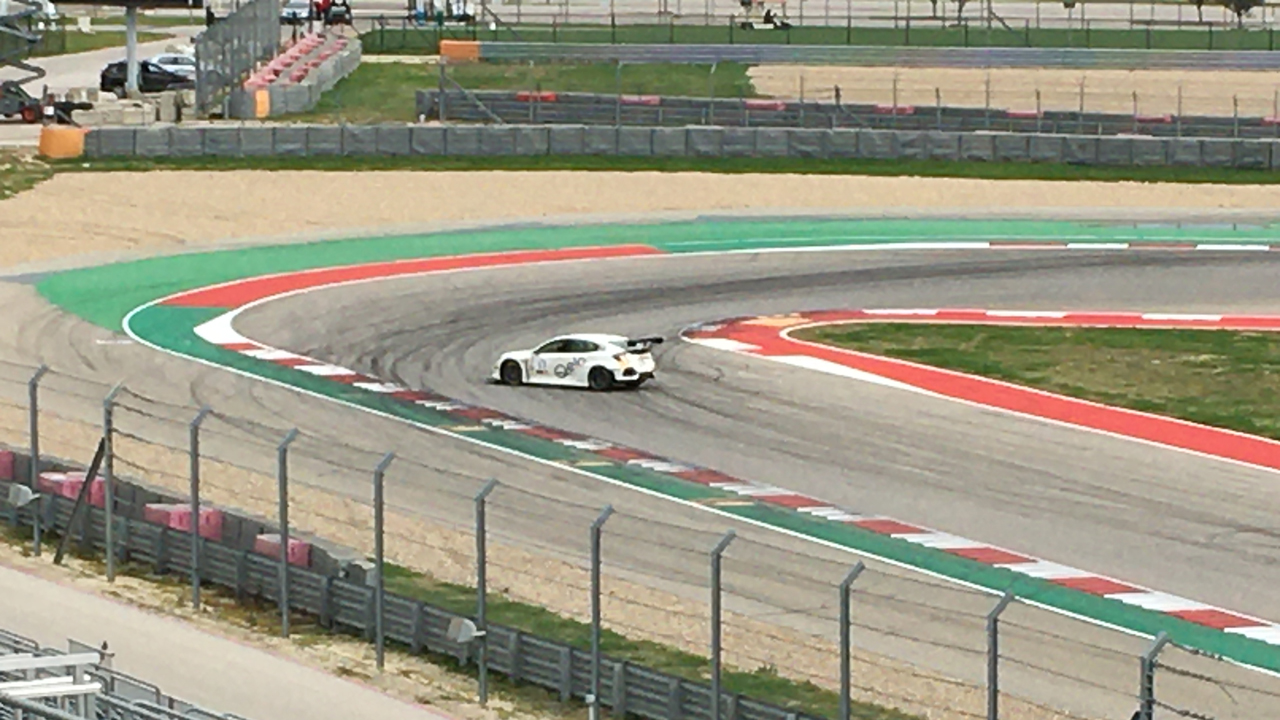 He isn’t the only car to spin in this corner, either.

Who else spun in that corner?

Are you coming up with nicknames for every single car now?

Actually, Aaron gets credit for that one. The Lego Car is actually a KTM X-BOW GT, a small car that epitomizes the term “super sports car” more thoroughly and uncompromisingly that any other car. According to their website, that is. 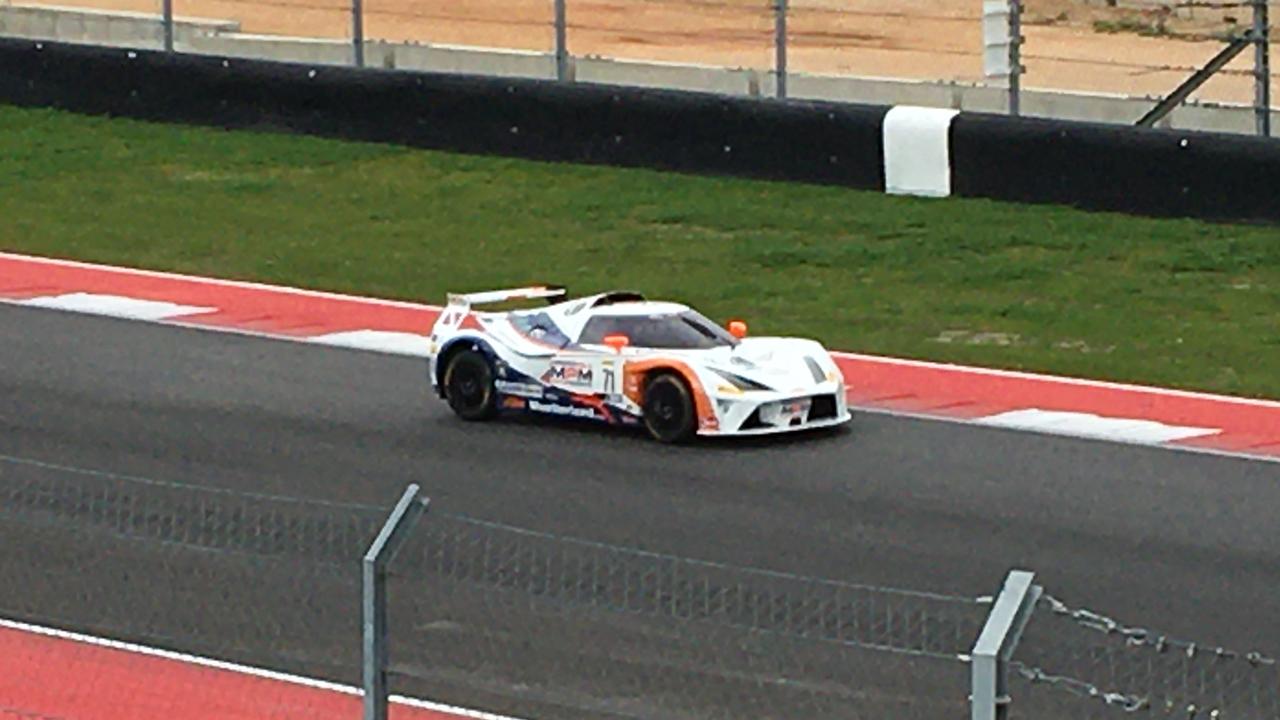 Does it not look like it’s made out of Legos?

How do you pronounce its name?

The announcers were divided over whether to say “KTM X-BOW” or “KTM Crossbow.” KTM is an Austrian company, however, so we may need to ask Arnold Schwarzenegger how to truly say it right. 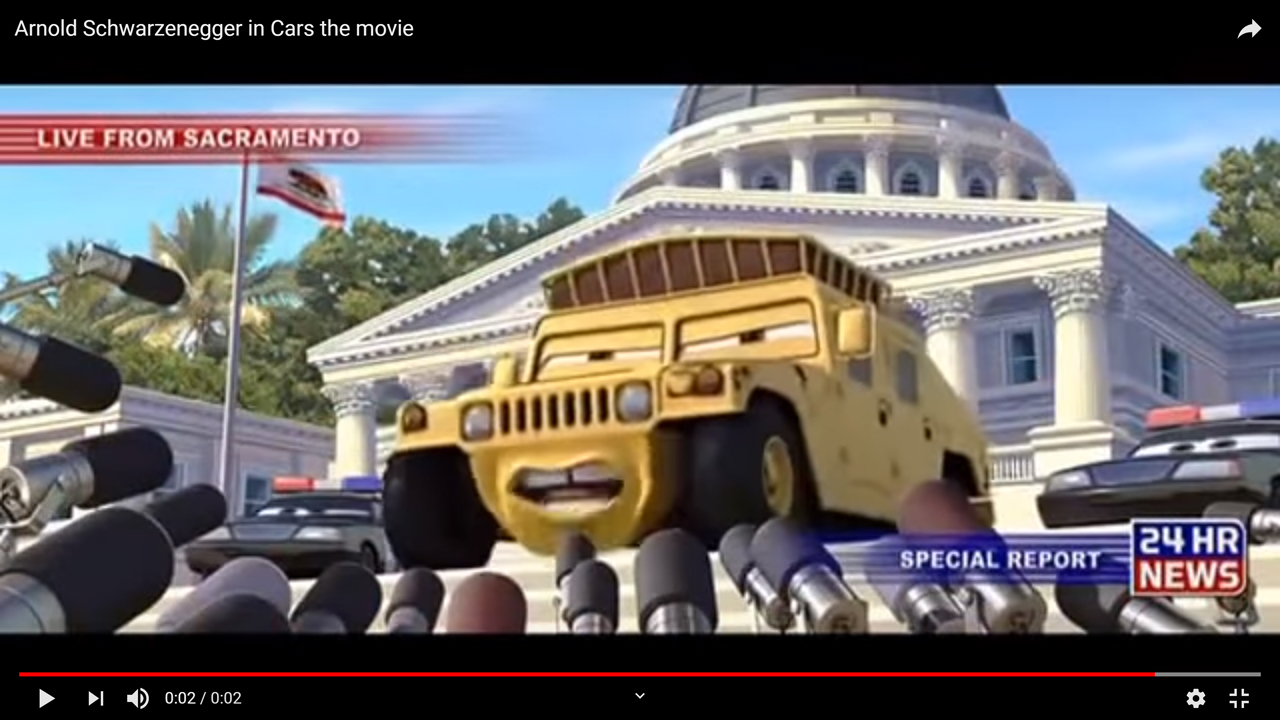 Lightning McQueen must be found, at all costs!

Couldn’t resist the Cars reference, could you?

Absolutely not. There will be more coming soon. 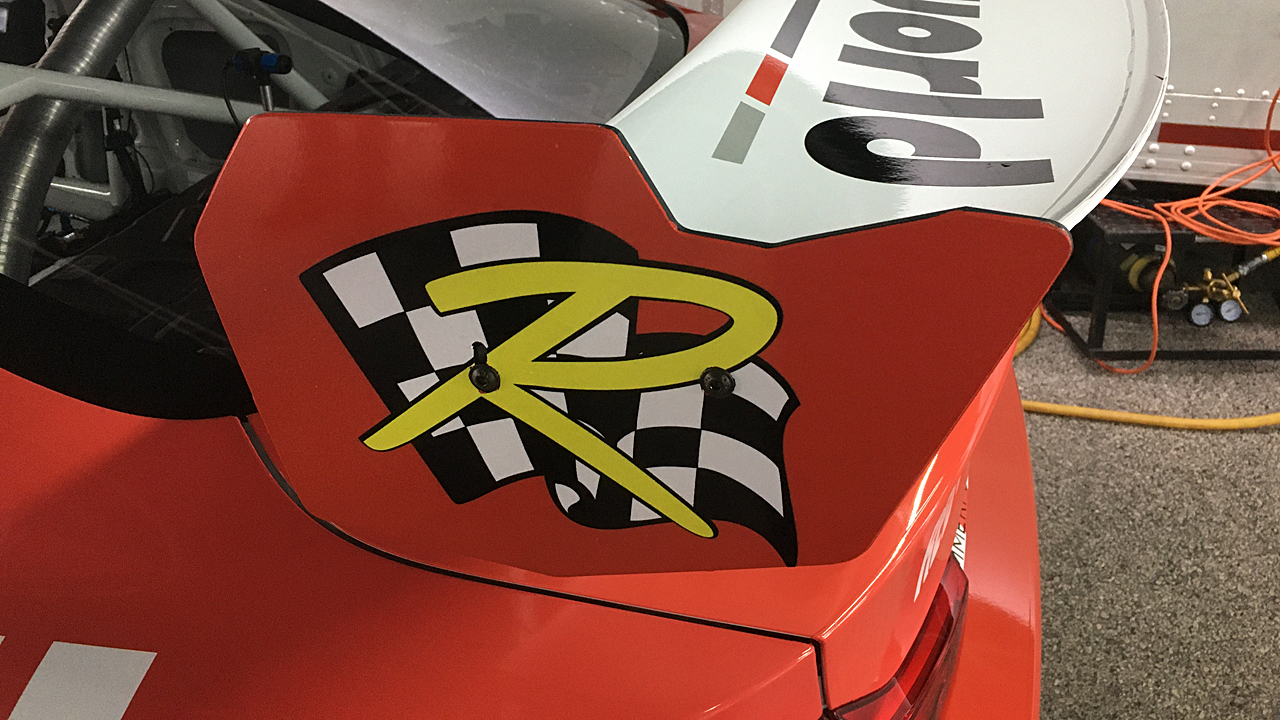 How about some information on your dad? We did watch the race to see him, after all.

Since each car has two drivers, they each start one race and go for half an hour. Then they switch and the second driver finishes out the race. For the first time since ChumpCar, pit stops will be a necessary part of the equation. 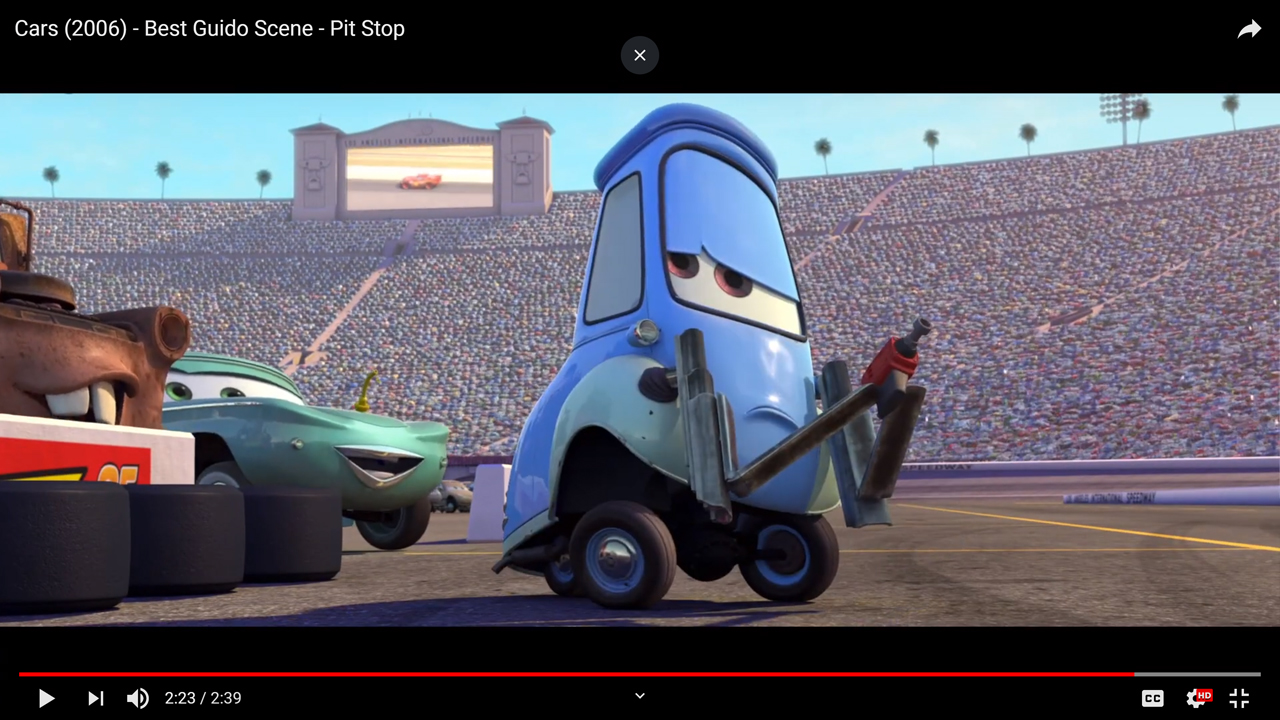 The plan was for JWJr to start on Saturday and Redacted to start on Sunday. JWJr qualified to start 18th out of 28 on Saturday. He actually got off to a decent start (using some good karma from TCR, I assume) and came out of Turn 2 in 14th. By the time the 15-minute mark rolled around, he was in 16th. Then he became the latest car to fall victim to that spinny corner I mentioned earlier. 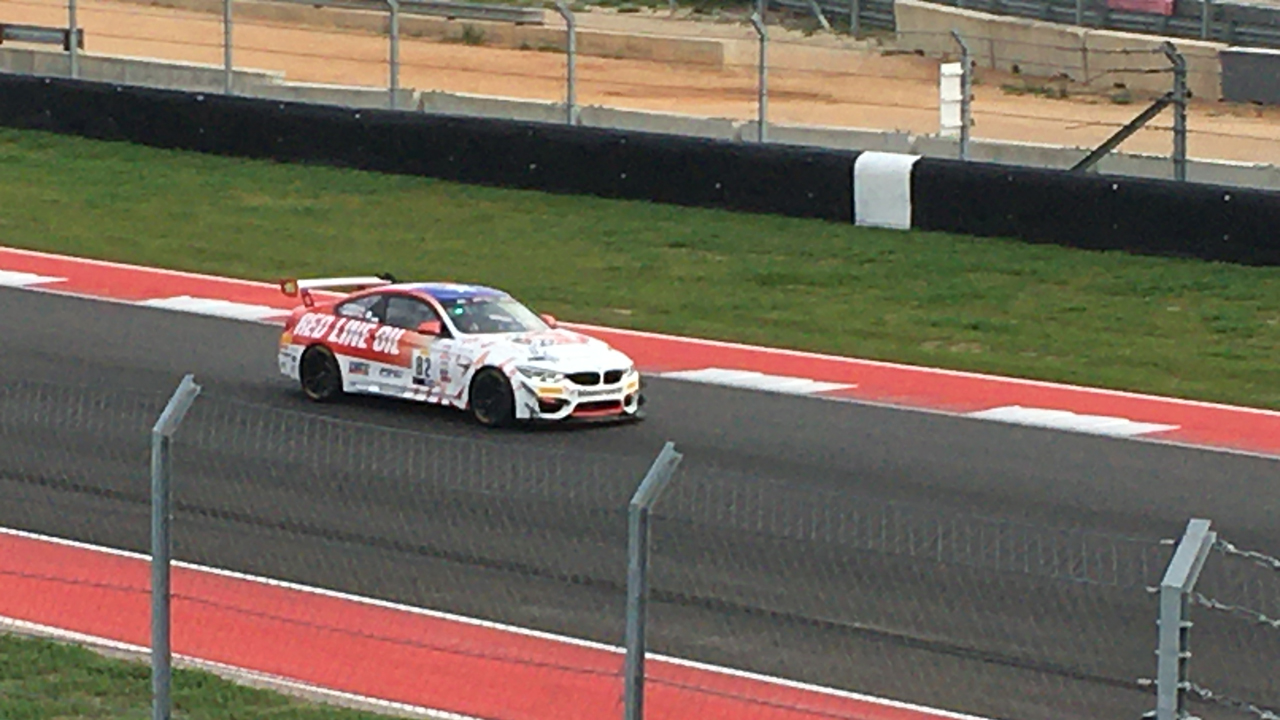 A great shot of #82 at speed by…no, just kidding, this is by a teenager at full zoom on an iPhone 6.

Sort of. He got a little sideways coming out of the exit of that turn, and the car in 17th had nowhere to go but into the left rear wheel. The BMW was pushed to about a 30-degree angle for a few seconds, then straightened out fine afterwards. Unlike its suspension. And it was a big enough issue that it couldn’t be fixed in an hour, so that was the unceremonious end of GT4 Race 1. Redacted didn’t even get to race. 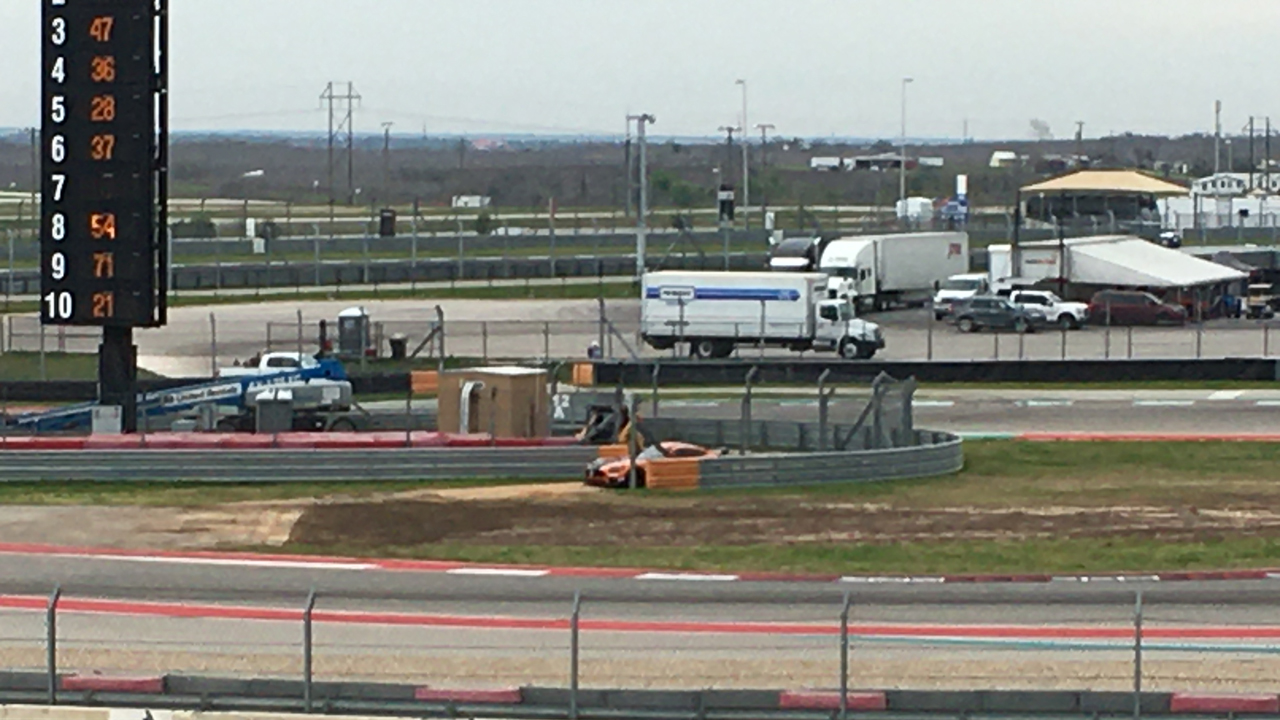 A picture of all the cars we finished in front of. Look carefully.

So they finished in last?

Oh. Is that the #34 imposter car from last year?

It is indeed. The BMW finished 27th out of 28 in Saturday’s race. Only ahead of…scR motorsports’ former self, if you will. I believe we should have stuck Murillo Racing with #82, but I don’t make the important decisions. That’s probably a good thing. Also, if it was up to me, PöRQ would stand for “Pretty Outstanding Racing and Qualifying.” But it’s not up to me. 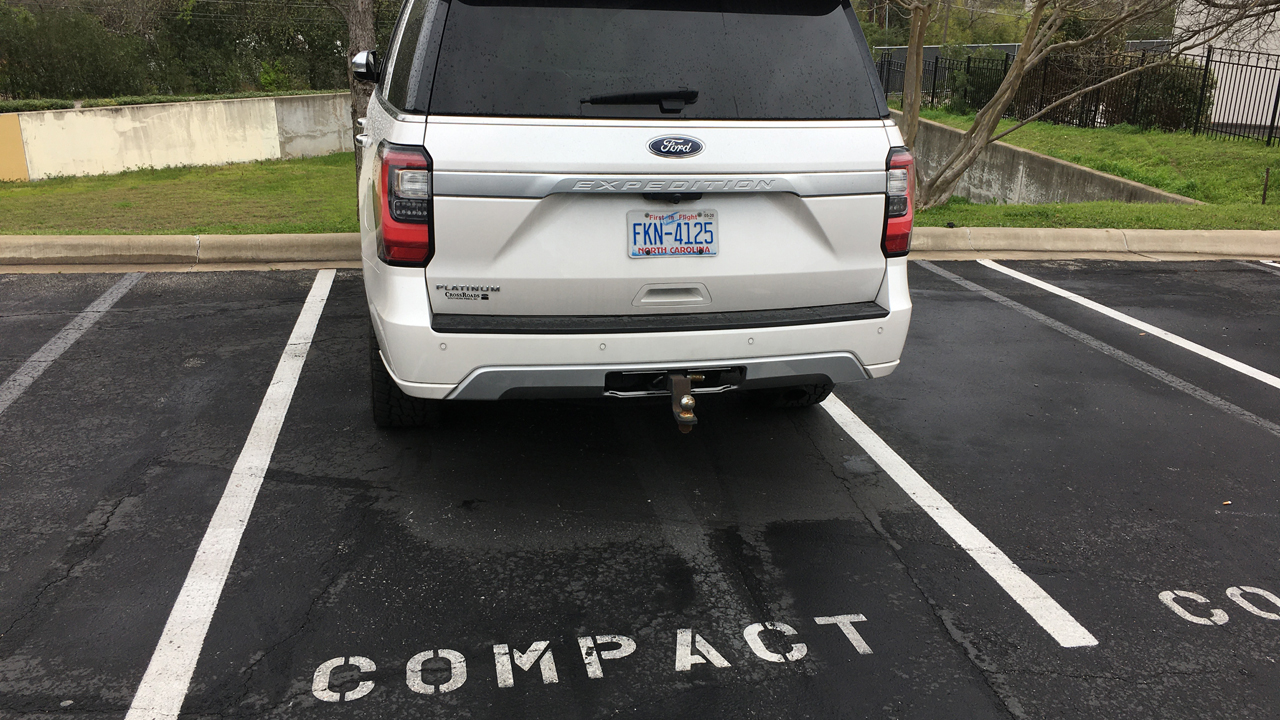 Seen in hotel parking lot. Driven by someone who REALLY knows how to park.

Yes, thankfully. Redacted started in 8th, and brought the car in in 7th. After all the driver changes were done, JWJr found himself in 14th. Due to one good pass of an Audi, one mechanical failure by the third-place Porsche, and a last-lap position loss to another BMW [dad edit: it wasn’t a pass for class position], the Red Line Oil machine finished the race in 13th. Not an excuse to drink champagne. But also, not bad. It’s the start of a good season. 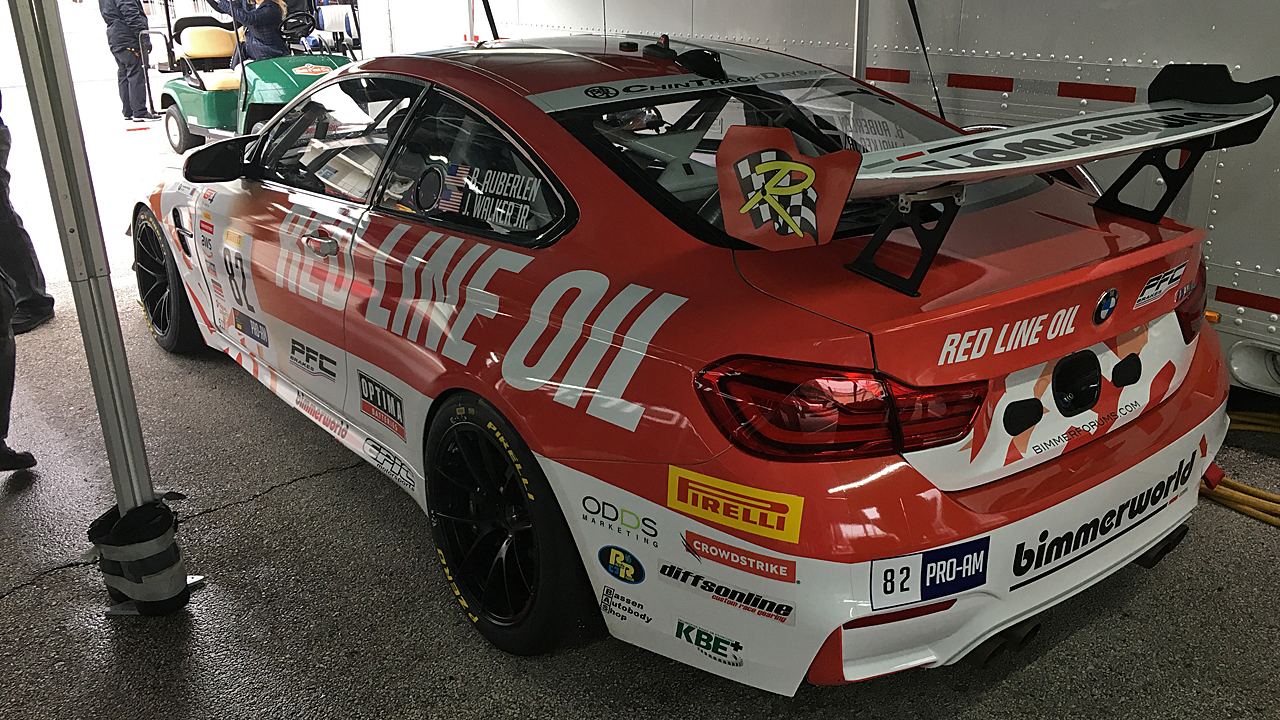 So as of Sunday evening, the car is fine?

It’s fine. There was little to no body damage from the hit, and everything broken was fixed. Fun fact: the BMW M4 GT4 looks like it has a tongue under the hood. 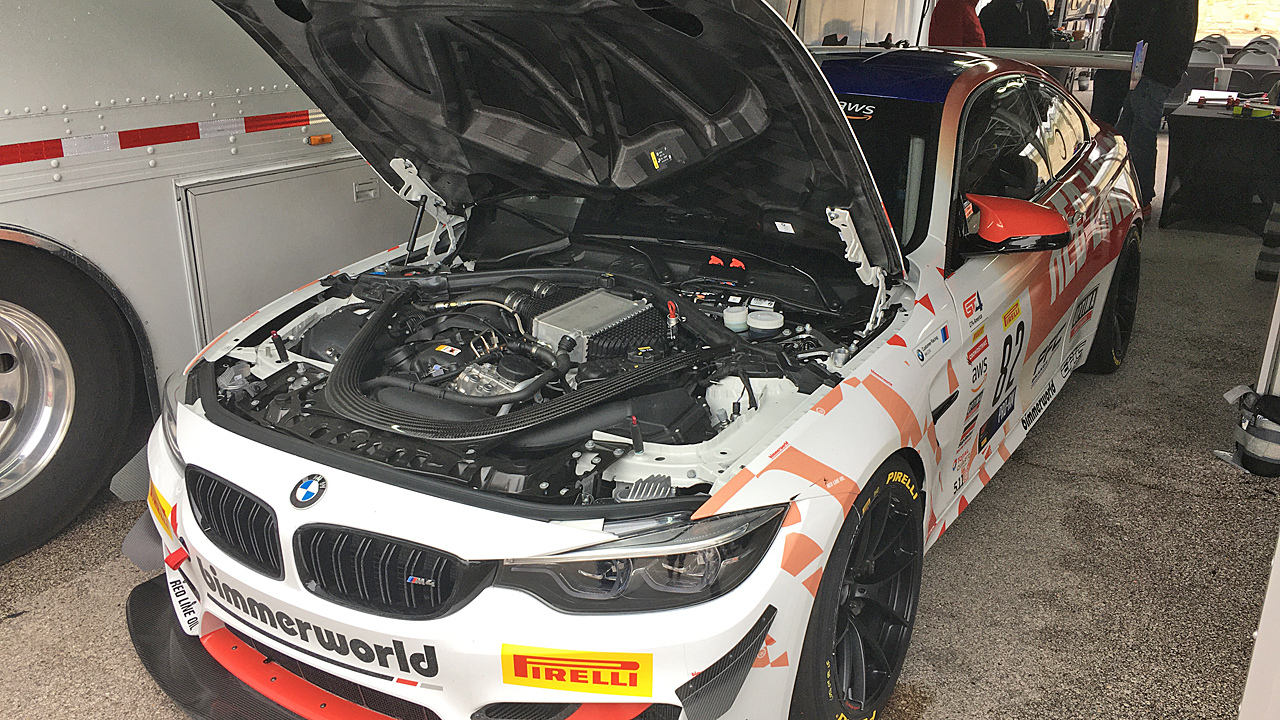 When’s the next race?

The Streets of Long Beach SprintX race will take place on April 18th and 19th. My mom is less than thrilled. Given scR motorsports’ history with street races, I am sure the drivers will be very careful not to leave a mess all over the Streets of Long Beach. I’m speaking of the potential of spilling PöRQ rinds, of course. Can’t get any crumbs on the roads. 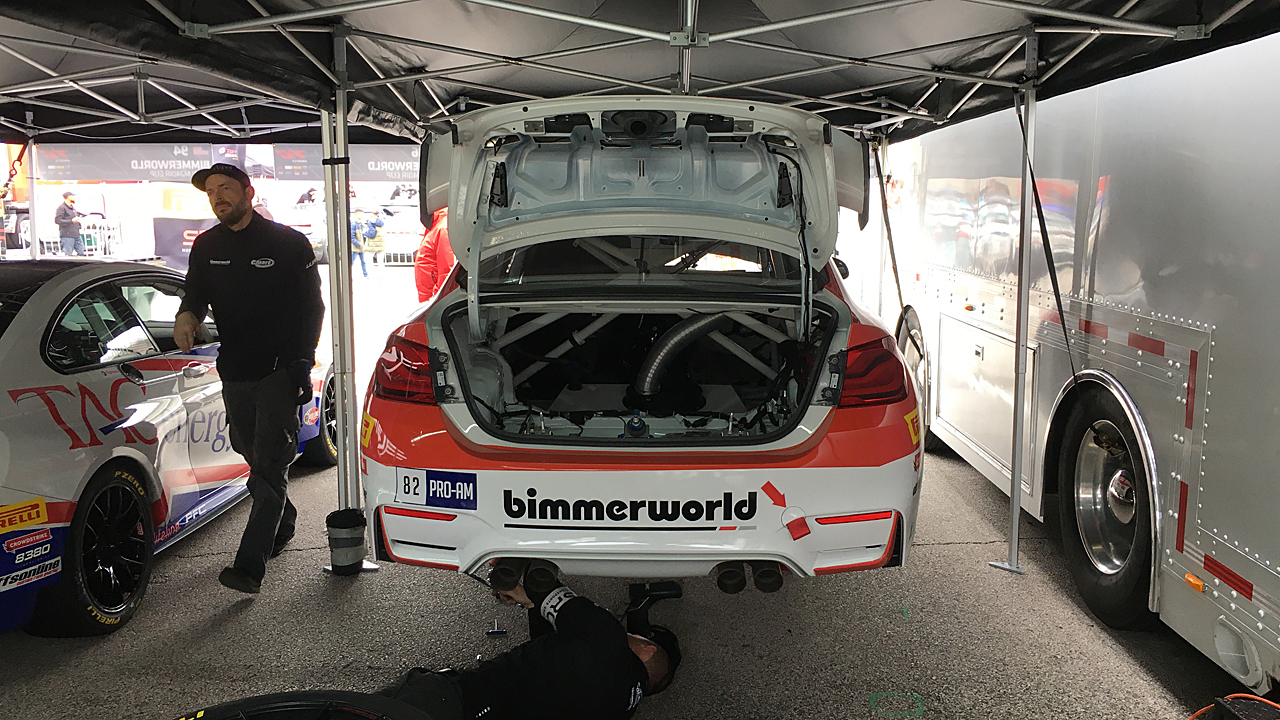 See you at the track, inches from the concrete blocks of death!