Austin, we return!
Eager, smarter, faster, all.
Yet results…so meh.

Q: What’s up with the Haiku? I thought you were done with that.

A: After reflection, I think it makes for a nice executive summary. 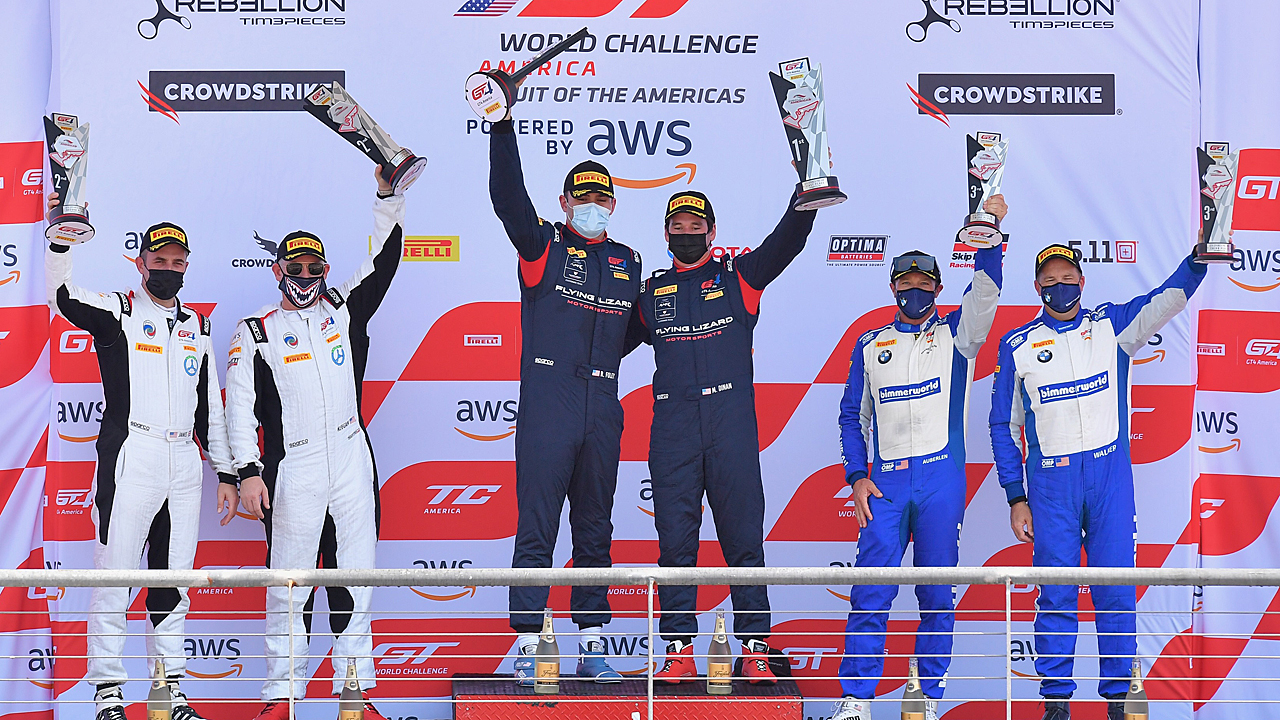 We are the two on the right with the smaller trophies.

Q: But in that picture you are on the podium. What’s so meh about that?

A: Got me there. The glass was definitely half full at times. But we clearly peaked too soon.

Q: It seems like you are not in the mood to write a witty newsletter. This sounds like Sonoma Part II.

A: Pretty much. Even though it was only one week ago, I have actually forgotten most of it. Just one of those weekends. I’m sure there were things that I should be sharing right now, but I’m kind of focused on the upcoming season finale at Indianapolis Motor Speedway at the moment. 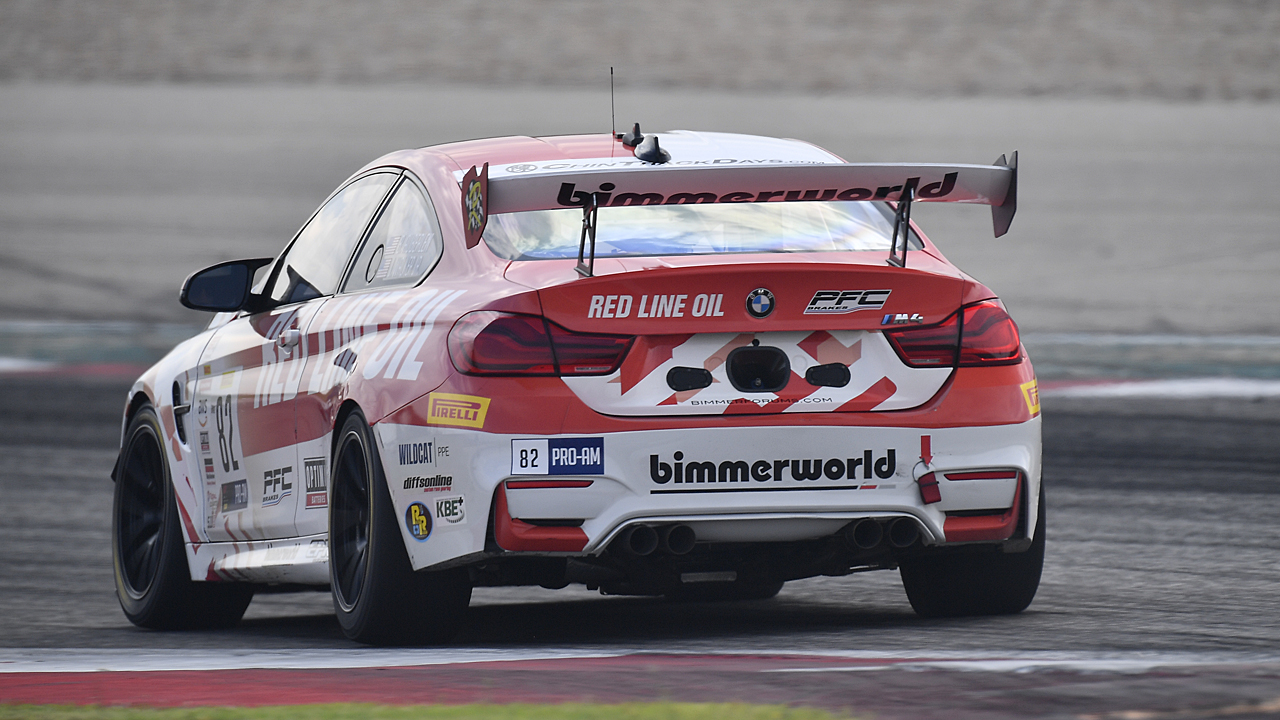 The rear bumper didn’t look this good on Saturday afternoon.

Q: Can you at least touch on the high points?

A: Sure. By the numbers…

Thursday P1: Of the 11 Pro-Am SprintX cars on track that morning, we were the fourth fastest. The weather was threatening, but ended up being dry enough to get a good baseline on the car and the track. Click here for the link to Thursday’s Practice 1 results. 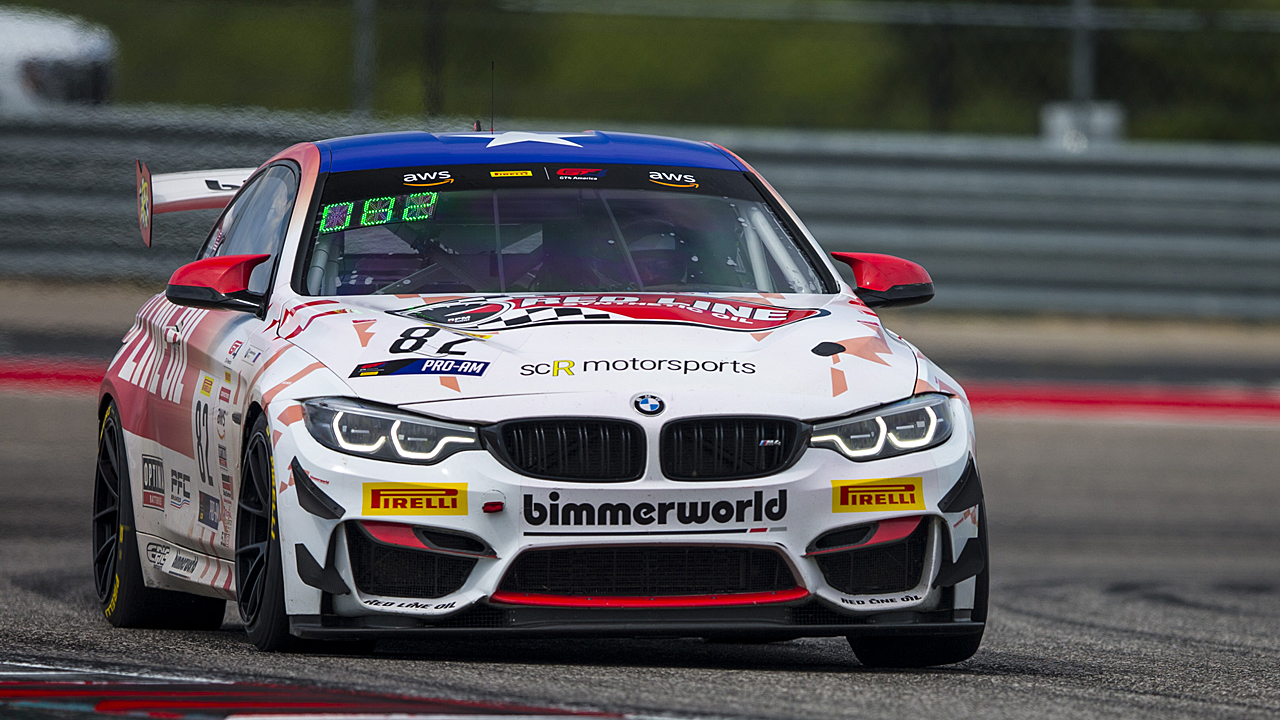 Just getting warmed up on Thursday morning.

Thursday P2: Of the 11 Pro-Am SprintX cars on track that afternoon, we were the fourth fastest. The session started out completely wet, but dried out as the clock clicked down. Click here for the link to Thursday’s Practice 2 results. 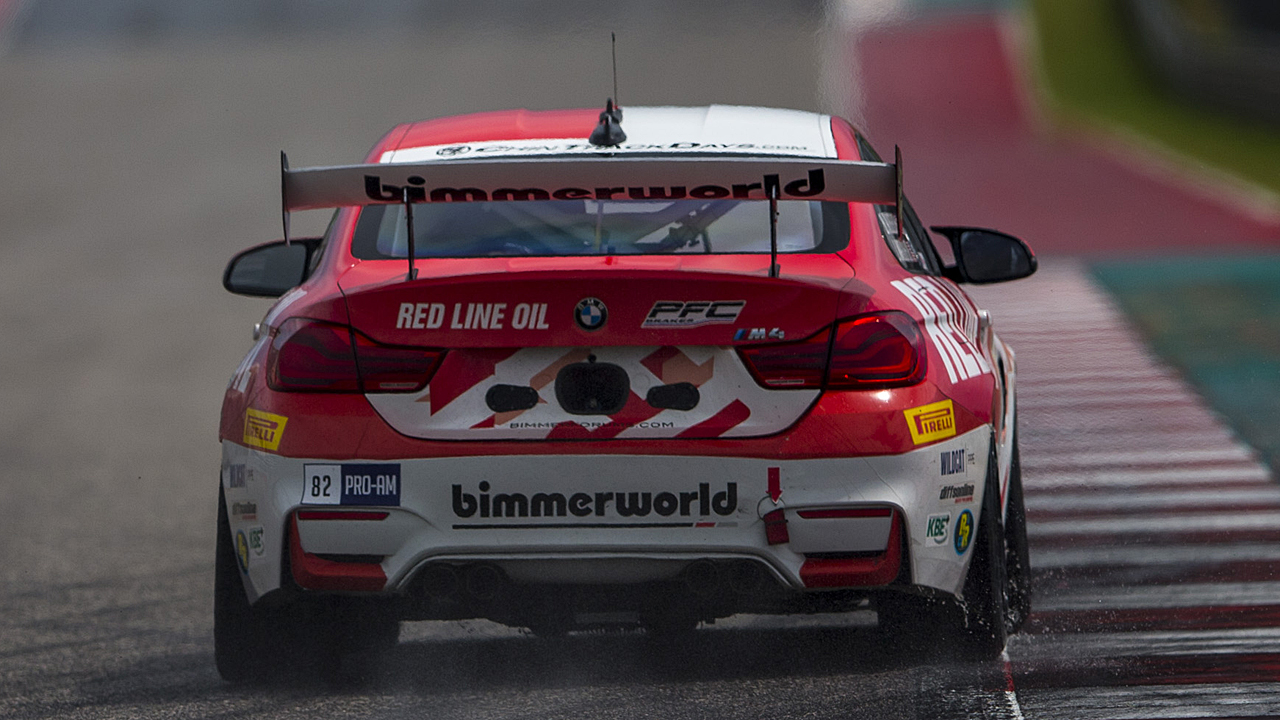 There was just enough water on the track to make things interesting.

Friday Q1: I got to qualify first and just never found my rhythm. At least that’s my story. As a result, I ended up starting Race 1 in thirteenth place overall, sixth place in class. Click here for the link to Friday’s Qualifying 1 results.

Friday Q2: Apparently Bill found his rhythm. At least that’s his story. He ended up qualifying for Race 2 in second place overall, second place in class. Click here for the link to Friday’s Qualifying 2 results.

Friday R1: After getting a great jump at the start, I was hit in Turn 1 and fell to the back of the pack. Thank you, COTA. Over the next 60 minutes, Bill and I drove through a good portion of the field, moving up to fifth place overall, third place in class. Salvaging a podium after being knocked around at the start was a great little shot of confidence. Click here for the link to Friday’s Race 1 result. 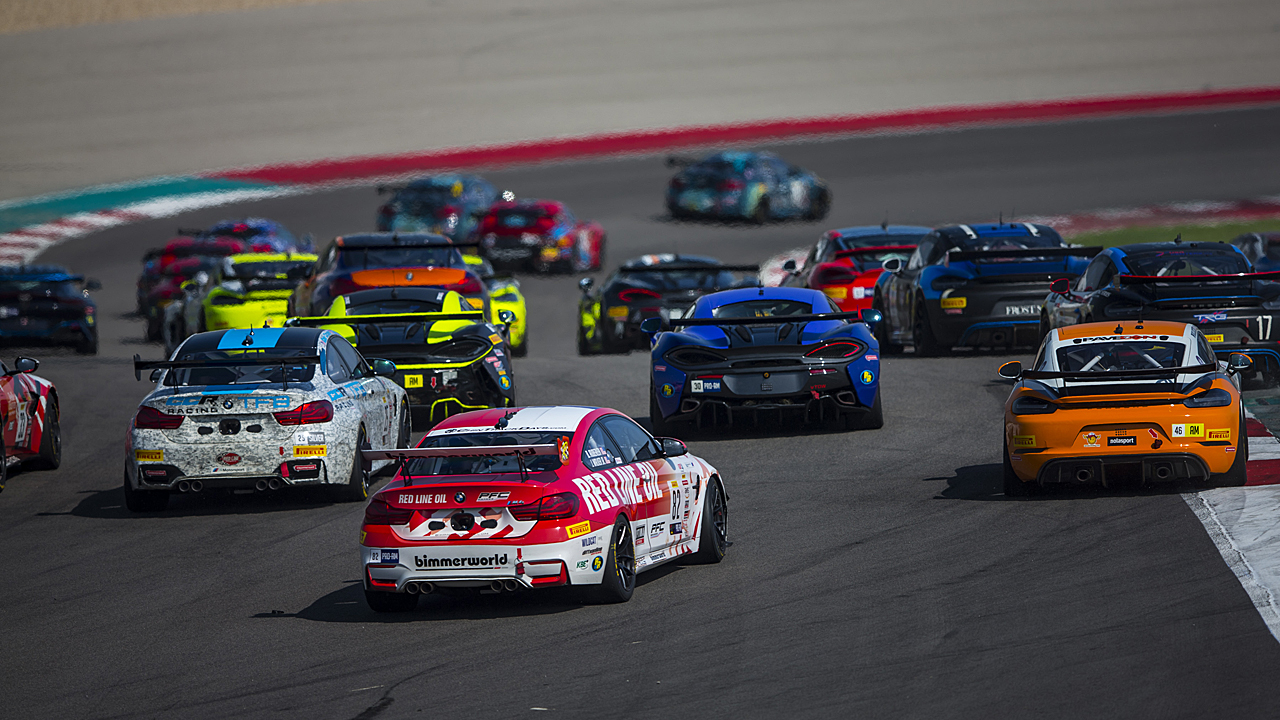 That’s me coming out of Turn 1 in last place.

Saturday R2: Saturday wasn’t awesome. After qualifying on the front row, Bill found the car slowly moving backwards though the field. After 33 minutes he handed me the car in eighth place overall, sixth place in class. Which is exactly where I finished 27 minutes later. Click here for the link to Saturday’s Race 2 result. 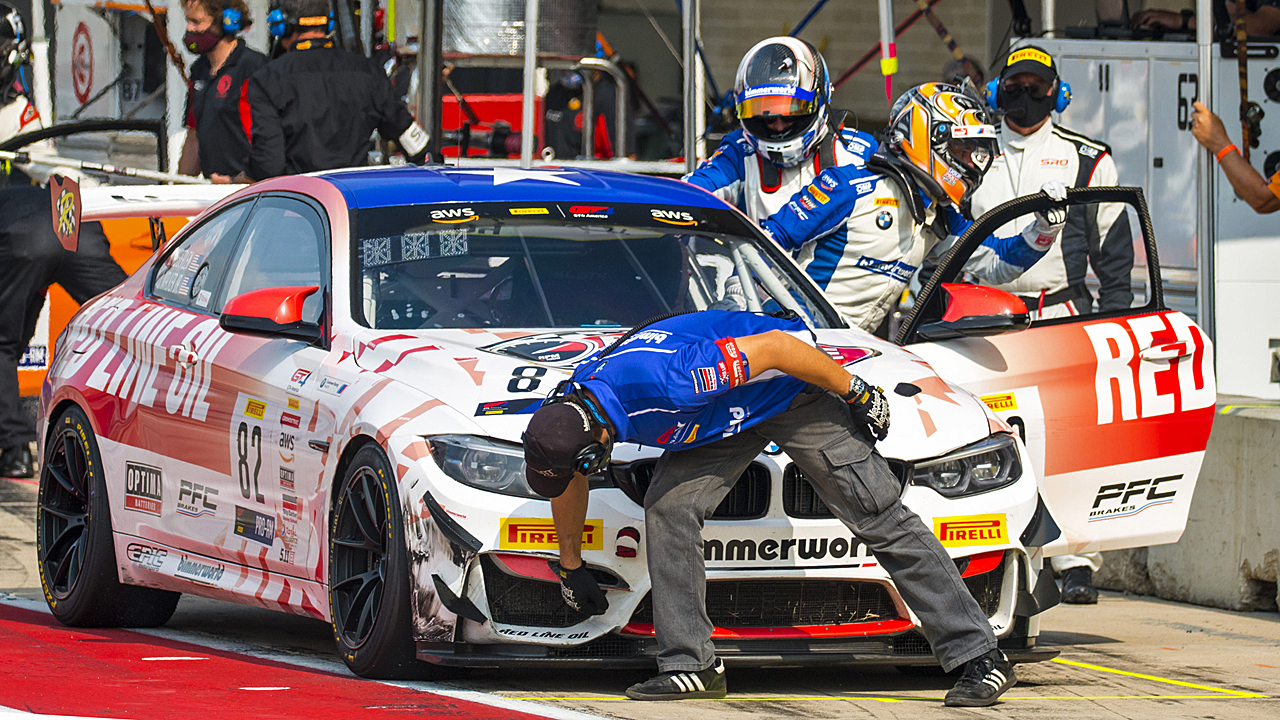 Q: So a third and a sixth really isn’t that bad. Where does that put you in the Championship?

A: We are currently in third place in GT4 SprintX Pro-Am. But it’s close. The team in fourth place has the same number of points, but we get the position by virtue of our three wins this season. Mathematically there is no realistic way that we can win the Championship overall, so maintaining our third-place position is the overriding goal at Indy. Click here for the link to the current GT4 SprintX Championship Points.

Q: When is the final race again?

A: This coming weekend! Because we are a support race for the NTT INDYCAR series this weekend, the schedule is a little bit unusual. In case you want to tune in to watch any of it live, the timeline looks something like this:

Q: Can I tune in from work if my boss isn’t watching?

A: Depends. If I am not your boss, then sure! You’re probably working from home anyhow these days.

Q: But what if you are my boss?

A: Then I probably won’t be watching you that closely.