Q: This was Road America, right?  Your second-to-last event of the 2019 TCR season?

Q: Did you finally get a little bit of racing luck?

Q: Do we blame the T-shirt sales for this?

A: That’s probably not fair.  But there’s still a handful left if you have interest.

Q: Is there a silver lining somewhere below?  Because we don’t need to hear you pouting about this for the next five minutes.

A: Absolutely.  We are still third in the TC America TCR Championship hunt.  And we got some more good pictures.  But it was a messy weekend. 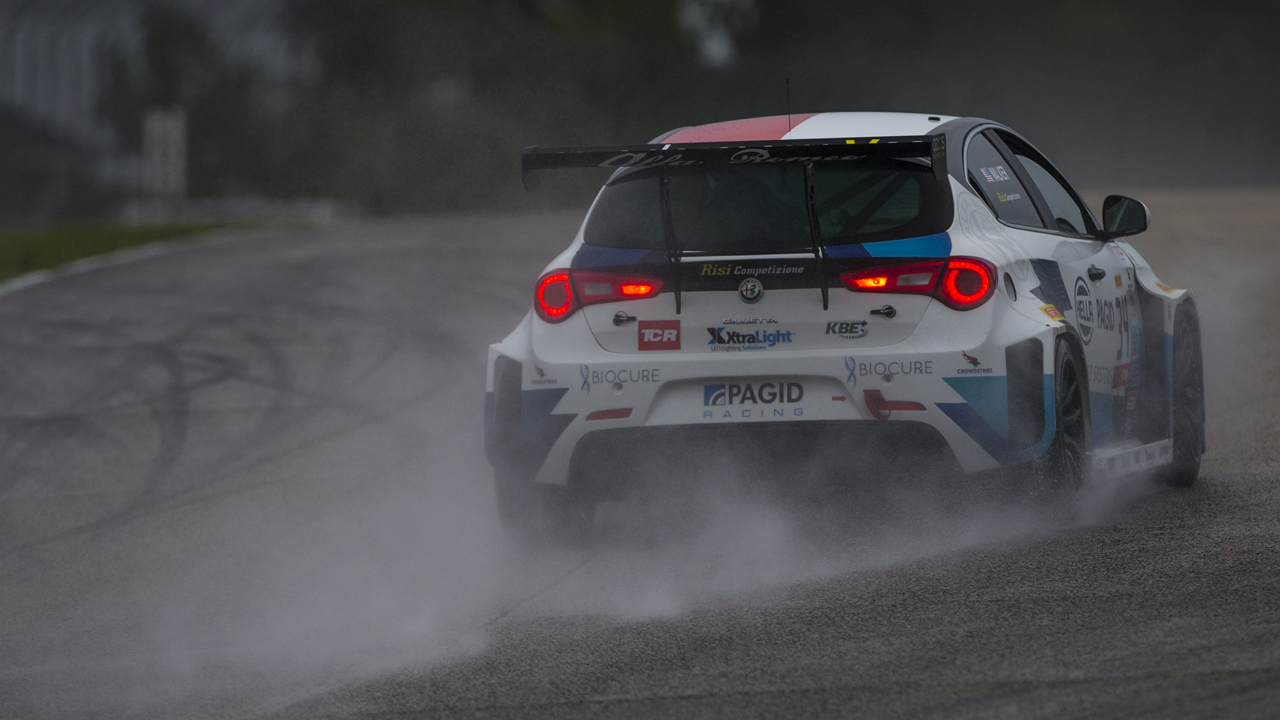 The track was just a bit damp on Sunday morning.

Q: I heard there was a racecar parade on Thursday night.  That must have been kind of fun.

A: Actually, it may have been the highlight of the weekend.  Just before dinnertime, about 40 or 50 racecars, our little Hella Pagid Brake Systems Special included, staged up at the main gate for a police-escorted parade into and around downtown Elkhart Lake.  While the drive was miserably loud, rough, and non-air-conditioned, the party hosted by SRO was remarkably well attended and gave us a chance to chat with many of the same people that would be coming out to cheer for us on Saturday and Sunday.  It was a great event that SRO should consider repeating.

That said, driving a real racecar on public roads requires about as much attention as driving it on track.  It’s nerve racking.  Nothing in the car’s DNA makes it happy while driving at constant speed in a straight line. 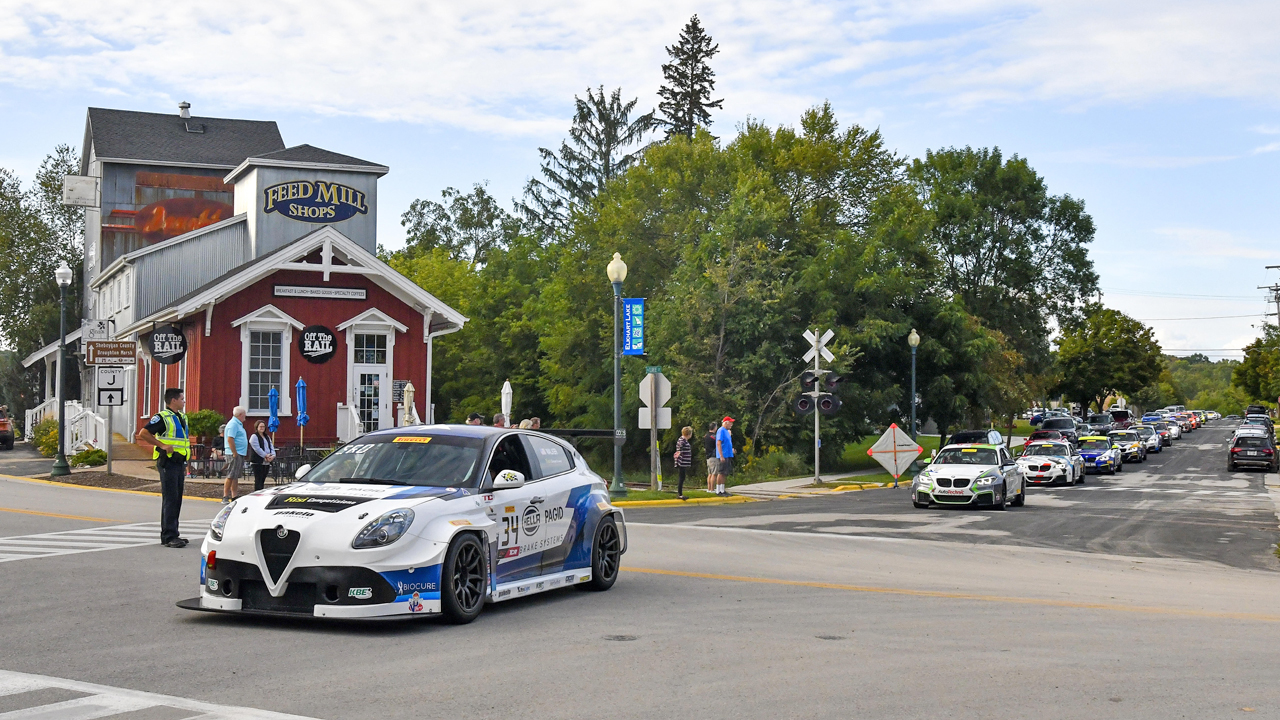 Q: Did you melt the clutch?

A: Thankfully not, although not for lack of opportunity.  There was a little too much stop-and-go activity for the TCR Giulietta to be truly happy, but at the end of the night we returned from the festivities none the worse for wear.  Or so we thought.

Q: That sounds ominous.  How did practice go on Friday morning?

A: It didn’t.  Or more specifically, the car didn’t.

A: Go.  After running just fine down into Elkhart Lake and back on Thursday night, the car decided that it didn’t want to participate in the Friday morning practice session.  It motored to the false grid just fine, but then it became an inanimate object.

Q: You missed the whole session?

Q: What was the cause of the problem?

A: A loose wire.  Sounds silly, right?  But an electrical connector on top of the engine wasn’t doing its job and we lost the entire 35-minute session as a result.

Q: Didn’t that same sort of thing happen to you at Road America in 2017?

A: Yep.  Virtually identical.  This track just doesn’t like me.  Or, more specifically, my electrons.

Q: Sounds like you didn’t get started out on the right foot.

A: That’s exactly right.  And we never got over it.  For the rest of the weekend we were always one session behind where we should have been.

Q: Did you at least get to run Friday afternoon?

A: Yes.  After the errant wiring harness was remedied, the car started and ran like a champ.  But then it all began to spiral out of control.

A: During both the Friday afternoon practice session and the Saturday morning qualifying session we just couldn’t get the car to work properly in the high-speed sections of the track.  Namely, the Carousel and the Kink, both taken at well over 100 MPH, were white-knuckle experiences.  The car just wouldn’t settle down and as a result our lap times just, well, sucked.  You can click here to watch our best qualifying lap, but note that I’m not too proud of the effort. 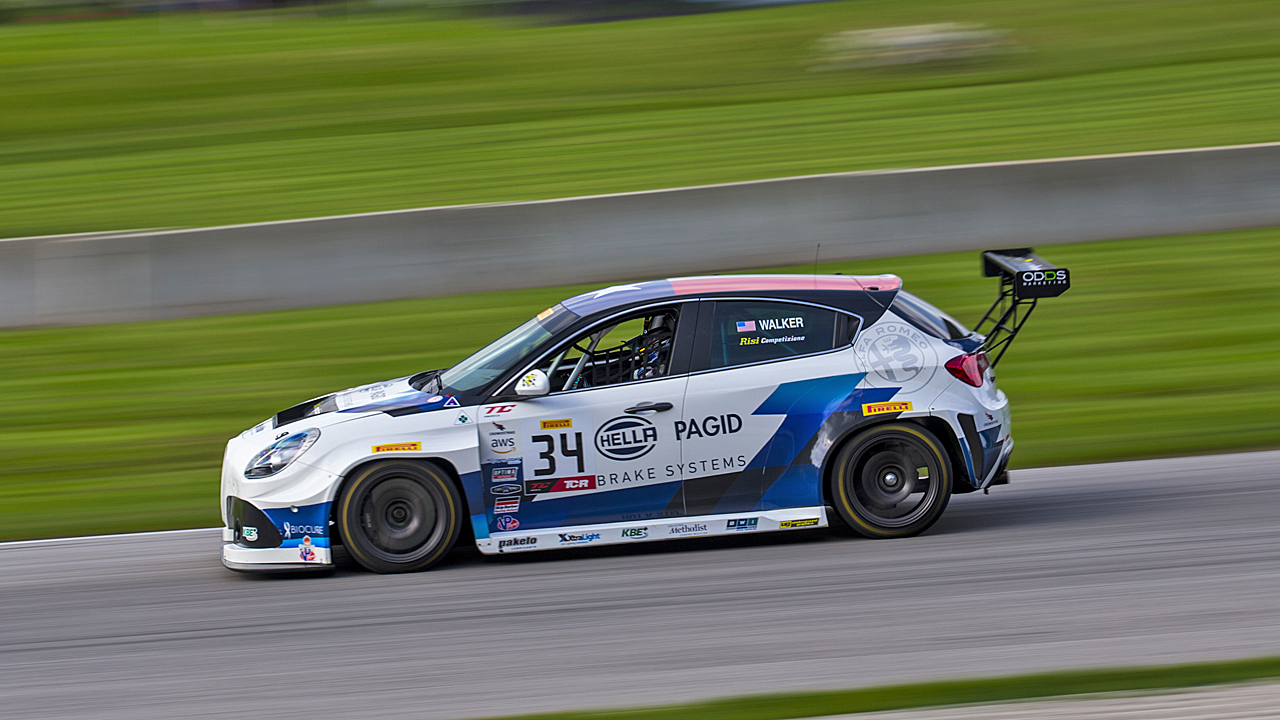 At speed in the Carousel.  But not enough speed.  Can you see my white knuckles?

Q: Where did you start Saturday’s race, then?

A: Fifth.  Which sounds kind of OK until you ask how many cars were racing in TCR.

Q: How many cars were racing in TCR?

Q: At least you didn’t start in third place! 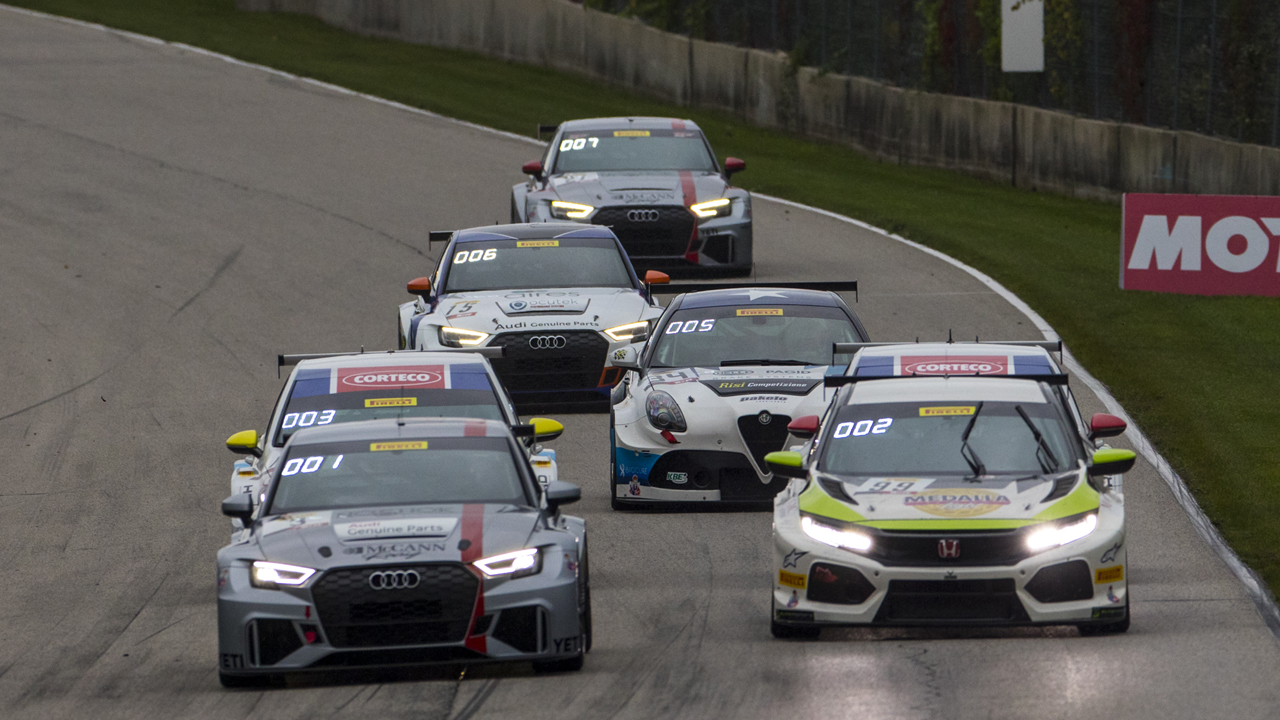 About 30 seconds later the windshield wipers would come on.  It was as gloomy as it looks.

Q: So you probably didn’t get squeezed at the start then.

A: No, but with the VW BrosTM (Zack has now trademarked that phrase and I can’t use it without his expressed written consent) two-wide in front of me coming up the hill I had to park it in fifth place as we entered Turn 1.  So much for making a great start.

Q: Is there anything positive at all that happened during the race?

A: Sort of.  After getting a great run down the back straight after Turn 3, I managed to pass Michael Hurczyn in the #71 VW going into Turn 5.  In parallel, Michael McCann in the #3 Audi went flying off the track exiting the same corner, so for a brief moment in time we were running in third place.  Hurczyn got back by me shortly thereafter, but on that same lap, Victor Gonzalez in the #99 Honda spun in Turn 12.  So, for a longer, but still brief, moment in time, we were again running in third place.

A: Nah.  A few laps or so.  The handling of the car was still spooky in the fast bits, and then the rain began to fall.  And then I spun 90 degrees in Turn 12.

Q: But I thought you really liked the rain!

A: That’s normally true.  And I even went and saw that new movie ‘The Art of Racing in the Rain’ last week!  But the spooky handling in the dry was exaggerated tenfold in the wet. 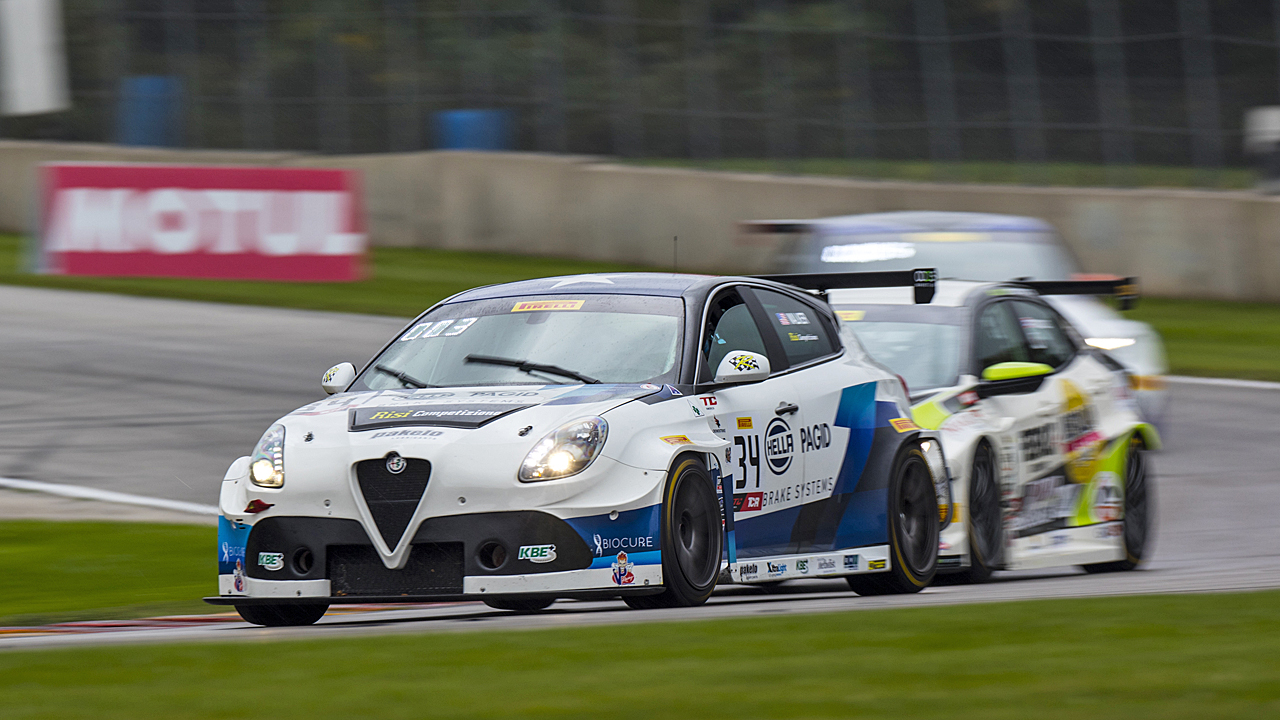 That ‘003’ in the upper-right-hand corner of the windshield is proof that yes, I was in third place for a few moments on Saturday.

A: There’s another problem.  While it was raining substantially (see the windshield in the picture above), it wasn’t raining enough for the race officials to allow us to change tires.  So we ran for 40 minutes on a wet track with slicks.  Which was more frustrating than terrifying, but mildly terrifying nonetheless.

Q: But everyone else was facing the same predicament, right?

A: Correct.  Except for the spooky handling part. We apparently had a monopoly on that.

Q: Did you finish last, then?

A: Actually, no.  McCann somehow was slower than we were.  Which I will never let him hear the end of.

A: Mathematically, you are correct.  But we were so far behind the leader at the end of the race it was mildly totally embarrassing.

A: Worse, actually.  But much of the same script.

Q: Did you beat McCann again?

A: You know what, you’re right.  Another silver lining!

Q: Without drawing it out, how did Sunday’s race go down?

A: We started in fourth place based on Saturday’s lap times.  Because it was raining HARD at the start, we were all on rain tires and started in single file.  Which would have been OK had Hurczyn (the pole sitter) not decided to take off about 30 seconds before the green flag was flown. 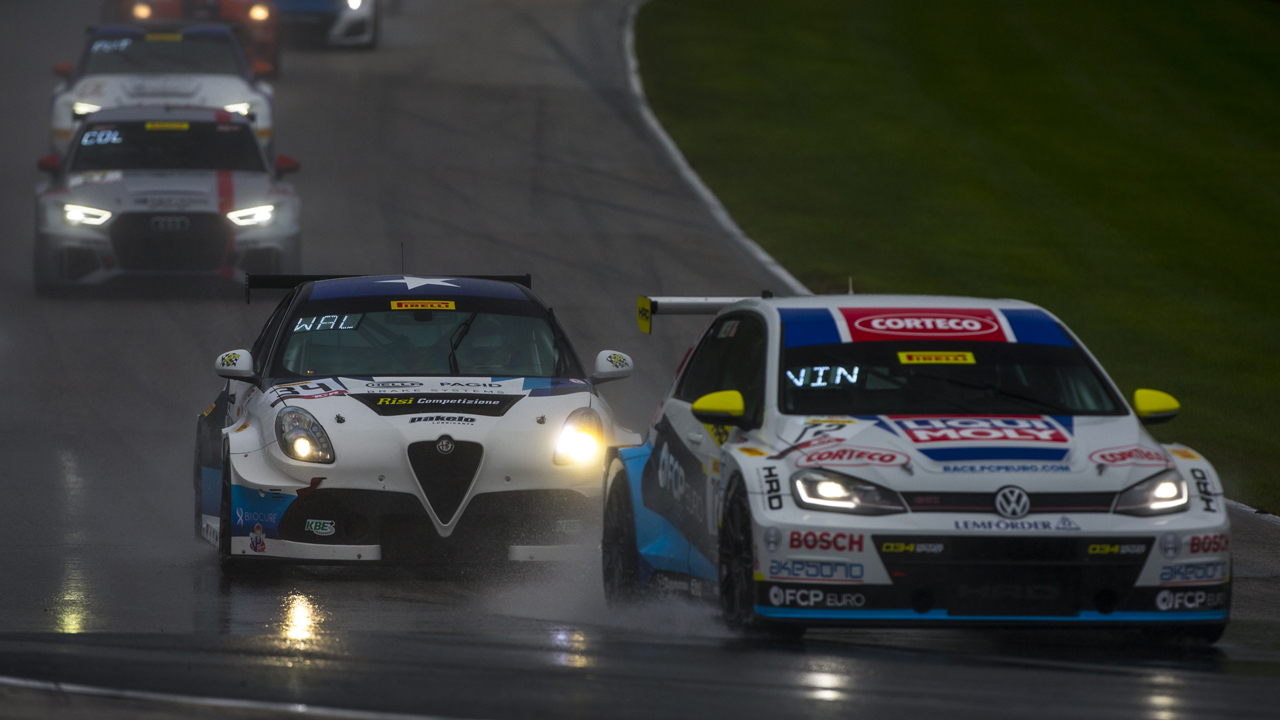 Our race start was delayed 45 minutes waiting for these “better” track conditions.

Q: Did the rain tires help at all?

A: Nope.  Still spooky.  And slow.  You can click here to see the in-car video from our “fastest” rain lap.  It might look like the track was dry in places, but that’s an optical illusion.

Q: Did you finish fourth again?

A: Yep.  A few laps into the race Hurczyn went wide in Turn 1 and we passed him as he was gathering his belongings.  But he managed to pass us two laps later driving up the hill going into Turn 6 and that was the end of that. 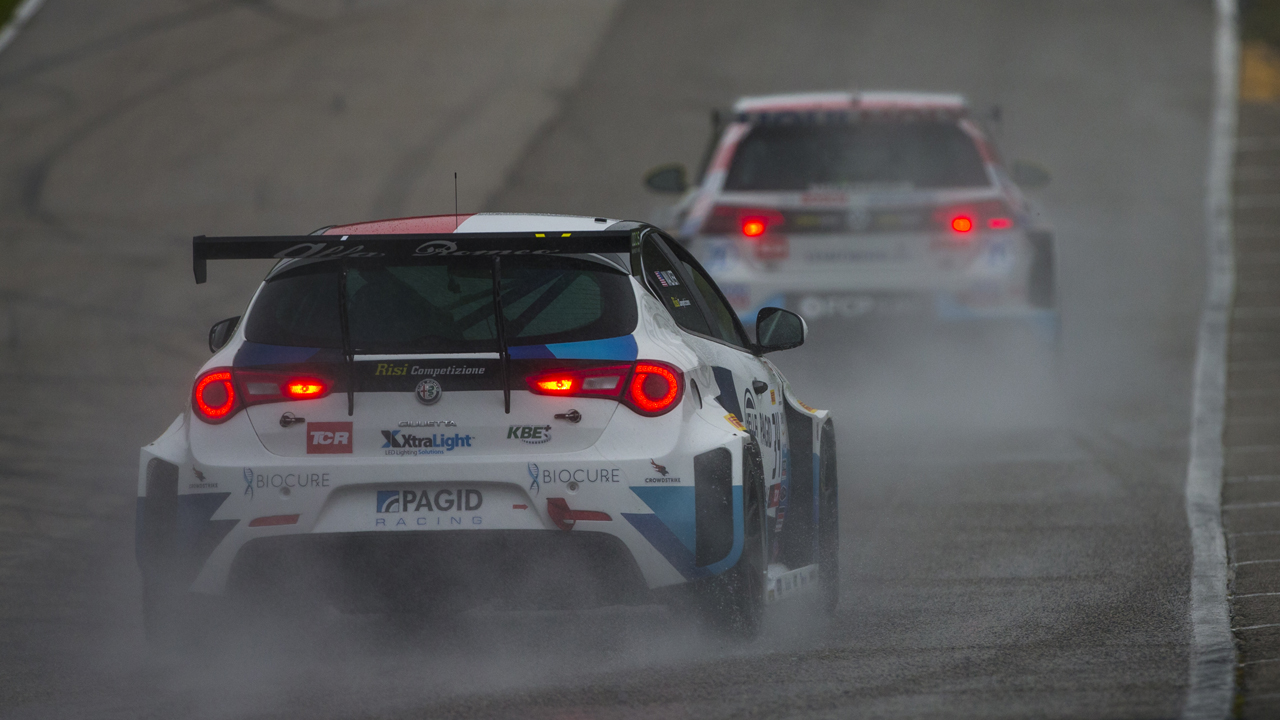 I am pretty much sick and tired of staring at VW tailgates.

A: Mathematically, you are correct.  But we were so far behind the leader at the end of the race it was mildly totally embarrassing.

Q: So overall, where did this weekend’s performance put you in the championship hunt?

A: I told you above.

A: Right.  Third place.  And there’s still one weekend of racing left on the calendar.

Q: Where can I find information so that I can watch it live?

A: If you click on this link, you will find the full timetable and viewing information.  If you want to come out to share the excitement with us, tickets are available in advance by clicking on this link.

Q: Will you be in a better mood by then?

A: Absolutely!  We have recovered from far worse this season and are still convinced that we are on the cusp of our breakout win.  All we need is (altogether now) a little bit of racing luck.  Not a lot.  But just enough to get the job done.