Kids.  Their development can be synthesized into three distinct phases.  In the early years they command all of your spare time, but at least they don’t eat much.  But time passes and they begin to eat so much you can’t go to Chick-fil-a without dropping 40 bucks.  Shortly thereafter, 16 happens and it’s the classic struggle for the car keys (and gas money).  And while all of this is the normal, expected course of things, raising small humans can still offer a few unexpected surprises from time to time.

To wit: Zack wrote his own Road Atlanta newsletter this month.  I’m not sure if this reflects well on my parenting or not, but there it is.

So, if you have five minutes to spare, please sit back and see how the world of Ferrari Challenge looks through the eyes of my 16-year-old son.  His filter might be slightly different from yours (and mine), but then again, maybe not.  Enjoy!

In a rare, but no longer unprecedented move, here is a *follow-up* to last week’s Ferrari Challenge Round 4 newsletter.

I actually first thought of doing this after the Watkins Glen race, but by the time I convinced myself to actually turn on the computer and do it, the moment had passed. But as this is *probably* the last 458 Ferrari Challenge race for #234, I’m not letting the moment pass again to offer my opinions on what was a great weekend to watch another competitive race – if you like hurricanes.

I believe I’ve had cameo appearances in scR newsletters before, but I’ve never written one, apparently because I was about 14 years younger when the Saturn era came to an end. Note that I am now 16, so the math will tell you that I am not the sole cause of the disappearance of the original #34. (Ethan happens to be 14, but he doesn’t read these.)

I liked Tom’s epilogue from last season enough that I decided to try one myself.

I’m not allowed to call him Tom?

Sorry about that, Mr. McCready.

Why is the Ferrari flag above the American flag here? 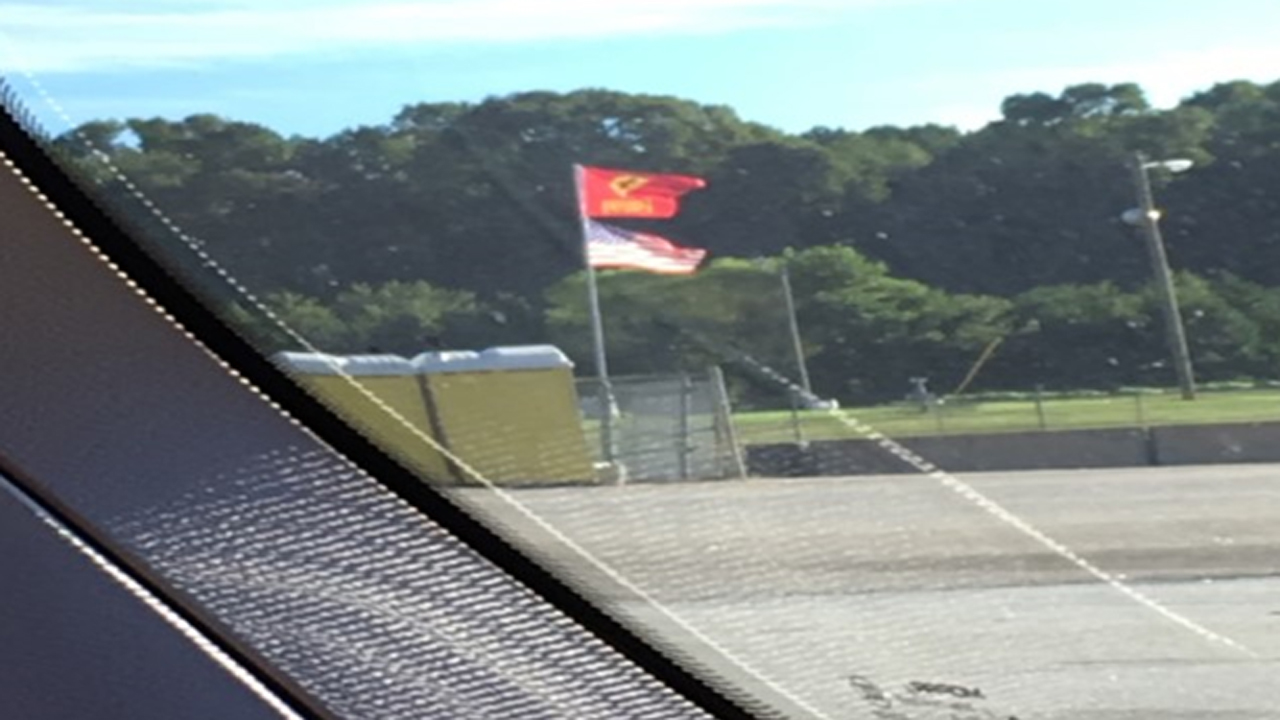 Sorry, we already declared independence, but thanks for the cool cars.

Didn’t you have more accidents this weekend than your dad?

Yes. But let’s save the best for last, shall we?

Was the rain really that bad?

From Friday night until Sunday morning, no. It was sunny and a crisp eighty-something degrees outside, which is equivalent to early December for us Houstonians. We watched qualifying from the bridge after Turn 10, enjoying the fresh air (the Texans, that is), or sweating and squinting into the sun (that would be the non-Texans). As mentioned in the real newsletter, they only got in three laps, but racing is racing and the team and fans were optimistic about the afternoon race. Then the grandparents, my sister Shelby and I walked back to the rental minivan, put it in reverse, pressed the gas aaaaaaannnnnnndddddd………

Drove back to the paddock without any problems. Never assume.

Did anything exciting happen during the actual race?

Nothing, really, except for some great almost-passes and the first pass during the “brilliantly-executed start” (driver quote).  In the end, the championship was mathematically just out of reach. But he drove excellently. So well, in fact, that he even claimed that if the wing angle had been lower he would have passed “Martin” and won! What a bold statement to make after such a closely-fought race. 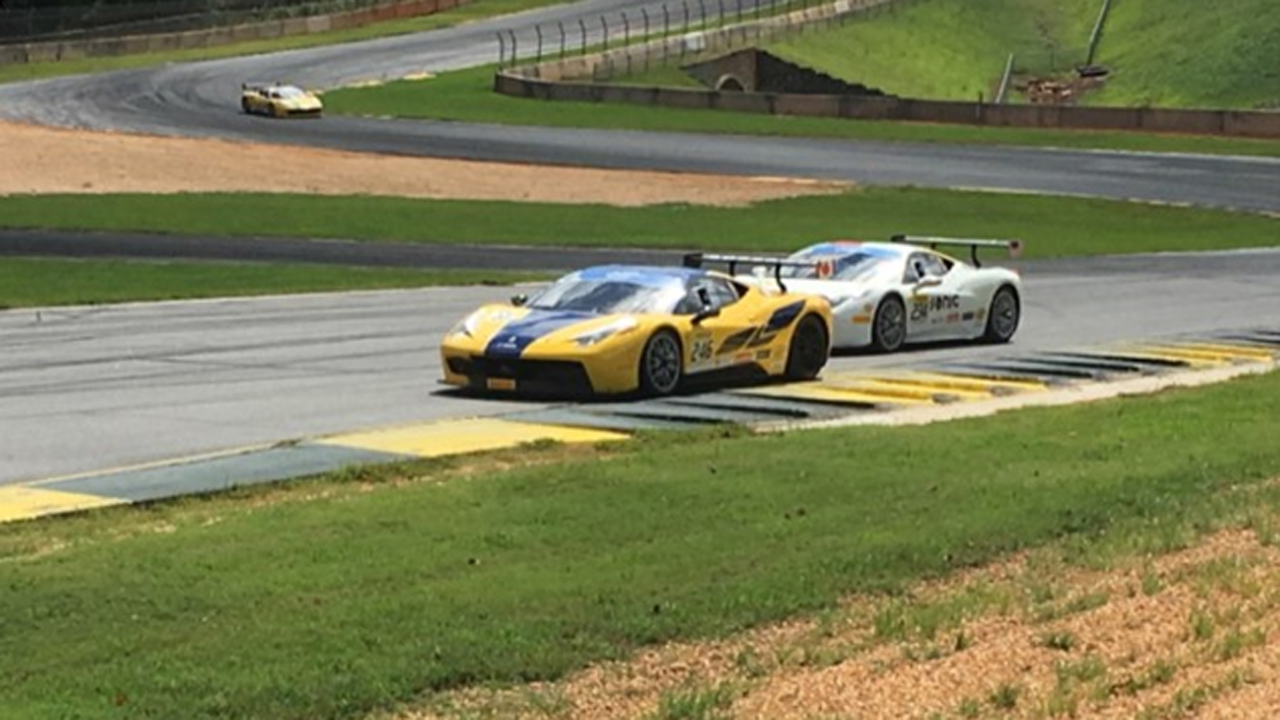 The pre-Florence view of turn 10. That’s “Trevor” in the background.

Doesn’t he say things like that every time he finishes in second?

Of course, but that doesn’t necessarily mean it isn’t true.

Were there any incidents not involving vehicles driven by the Walkers?

Yes. Several cars spun off right in front of our viewing station (which was at the end of the longest straightaway) and had to be flat-bedded off. Good thing the wrecked racers have entire spare cars in their trailers ready to go, as most of those who totaled their cars do. Ferrari people, am I right? One of the spinout crowd thought it was a good idea to pull back out on the LAST LAP one foot away from our hero and “Martin” who were passing him. Kind of like when Lightning McQueen passed the pace car, but a little closer than that.

Do these guys have names?

Most of them escape me, but one driver whose name you might remember from earlier in the season was there. Yes, Riley Ryen (cause of the new front fascia and owner of the famous #IShowUpIGoBoom) was not allowed to drive in Sunday’s race due to extreme lack of speed, but to her credit only spun out once and caused no major issues. This was probably the cleanest Ferrari race that I have ever been to.

I’m not allowed to call her Riley?

Fine. I’ve heard she likes to go by Canada’s First Professional Female Ferrari Racecar Driver or something of that nature, so we’ll go with that. 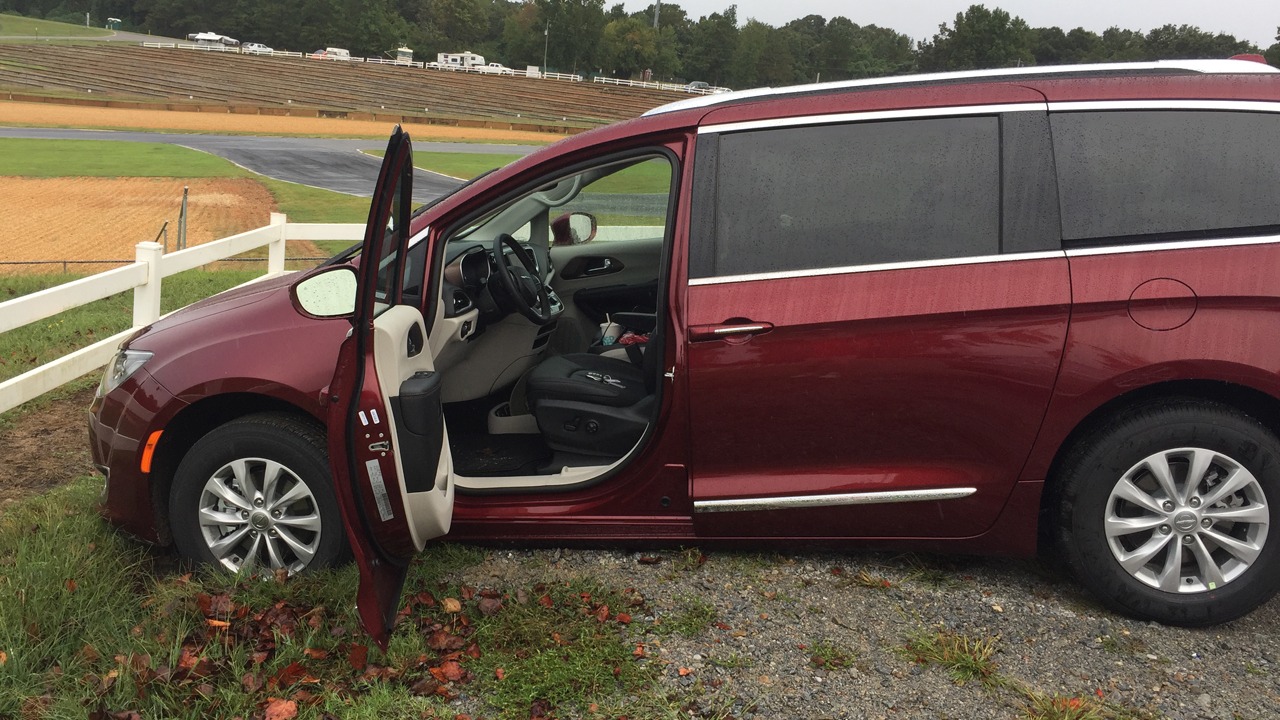 It’s all fun and games until somebody turns 16.

Didn’t you have more accidents this weekend than your dad?

Uh, yeah. On Sunday we stayed in the car to watch qualifying because of the aforementioned minor hurricane. So I wouldn’t have parked so close to the fence if we were getting out of the car to watch, but it turned out that the best place to sit in the van and watch was not an ideal place to park. Which I realized immediately after rolling the front wheels over the deceptively steep bump, but tried the time-tested method of trying to make the problem go away by ignoring it. Which (duh) didn’t work. Then we enlisted Billy (Mr. Baker?) and crew to attach straps to the other rental minivan and play tow truck. Which didn’t work either. But maybe they were happy they had something to work on besides expensive Italian race cars (kidding). Although the stuck minivan was imported from Detroit, so there’s that. 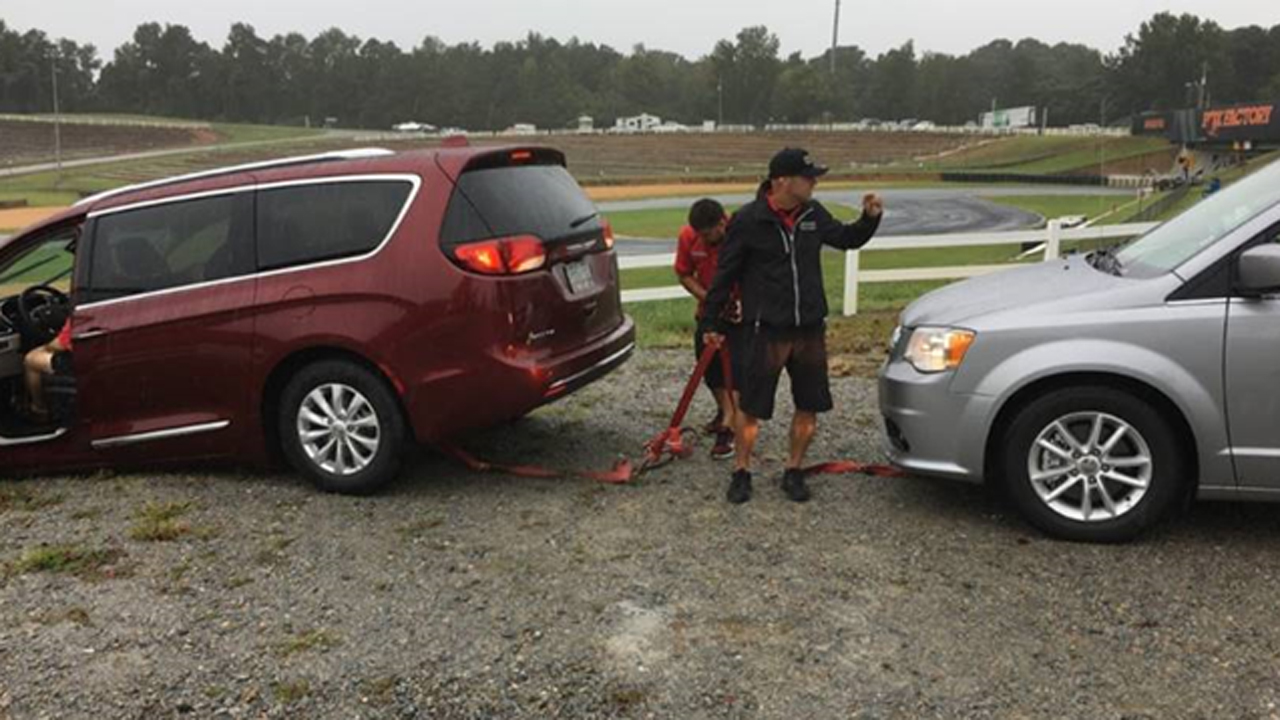 They’re having fun. I promise.

After the second minivan valiantly failed to rescue its trapped comrade, we took advantage of the many larger, heavier vehicles that live at the race track. The wrecker pulled it out easily, and there was no structural damage to the minivan.

Didn’t he said something about you paying the wrecker for services rendered?

Well, the guy didn’t ask for anything in return. Plus it’s been two weeks and I haven’t gotten a bill yet, so that’s a good sign. And I did thank everyone profusely for their assistance in remedying my first vehicular transgression (BEFORE I received a text saying  “You will thank everyone profusely”). I also received one from my mom saying “Oh my goodness, Zachary James!”. As every child knows, first name + middle name = trouble. It has already turned into something to laugh about, and the only casualty was Shelby’s hair when she was forced to walk to a porta-potty in the rain instead of being driven. 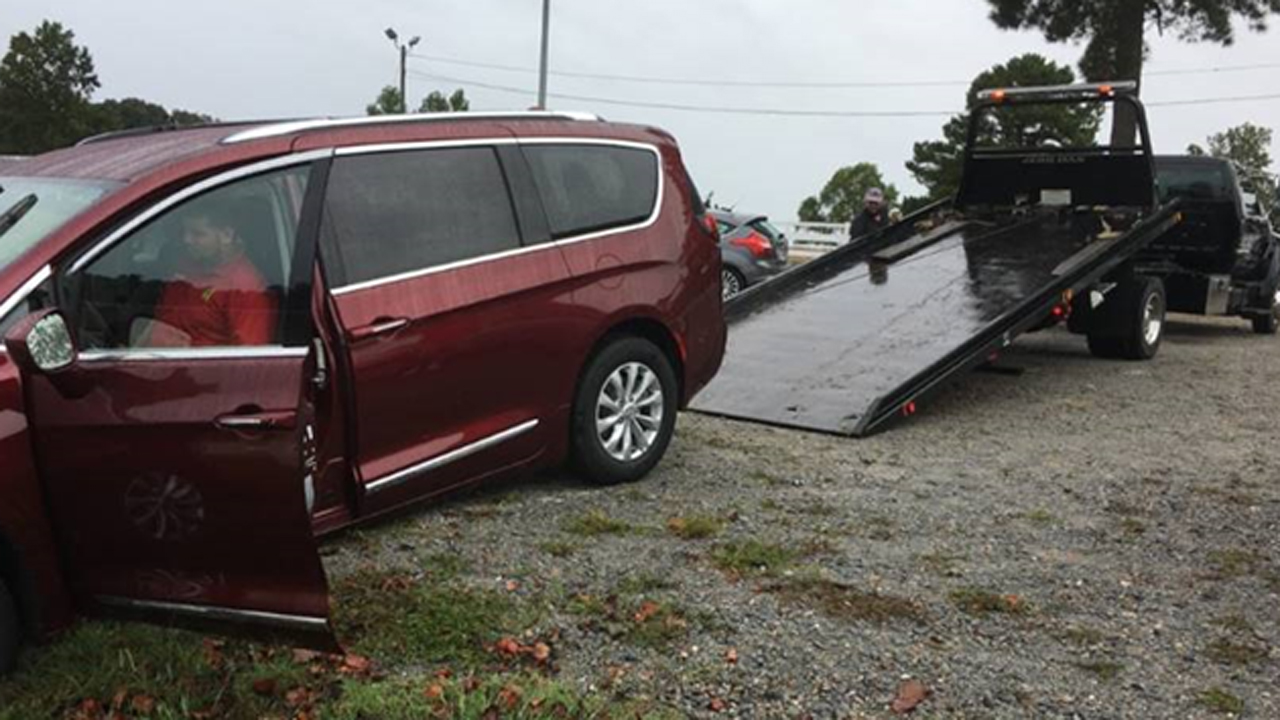 Calling in the big guns.

What did your dad think?

I broke the news to him with “I found a way to make your newsletter,” so his sense of humor prevented him from getting too mad. After all, I suspect he was once a teenager too and did dumb things with cars. I haven’t gotten a definite answer out of him about what exactly he did, but I’ll keep working on it.

He didn’t strap into a Ferrari until he was *insert number that makes him feel old* years of age, so I figure I have a little time to decide. And yes, I do think this whole racing thing is extremely cool, and a little ridiculous. But you can’t be a Ferrari owner without both.

Do you ever sass him about how he drives, given that you’re a teenager and all?

Not over the radio. Off the radio, sometimes. He gave me a piece of advice when we were driving later in the week. I followed it, and he said “Next, I’ll show you how to pass the first place car in the rain at 140 mph.”  I then proceeded to tell him that those who can’t do, teach. He probably would have slapped me had I not been driving, and I awarded myself major sarcasm points. No one is above snarky comments in our house.

While the plan next year may or may not be finalized enough to be revealed to the masses, it’ll certainly be with the Risi team and it’ll certainly be fun. It may not be with Ferrari, but as I’ve heard many times, the most important part of racing is having fun, not the horse on the hood.