Well, we finally got to the podium with others present!  Starting from the pole, posting the fastest race lap, and ending up on the second step of the podium in spite of getting hit and spun around backwards mid-race provides lots of material for a newsletter… 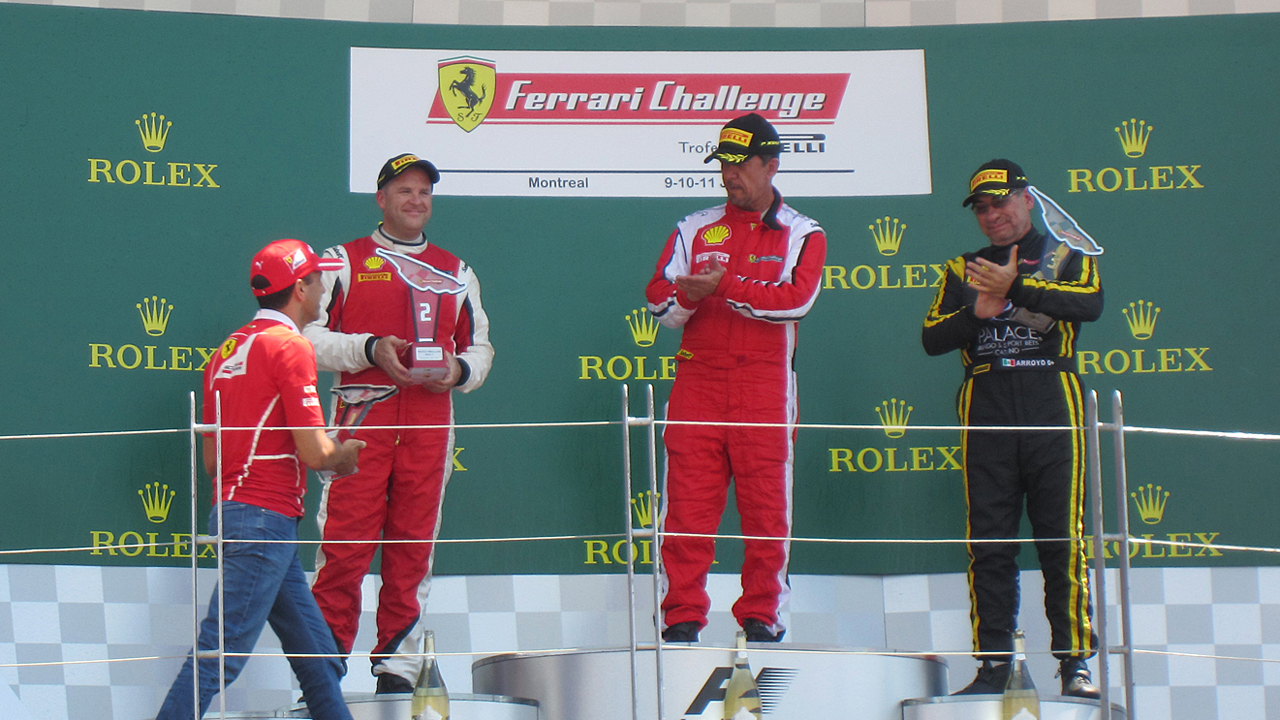 One right-rear fender (not my fault)

One rear fascia (not my fault)

Two rear wheels (not my fault)

One pair of Oakley Flak Jacket sunglasses (not my fault)

Montreal, Canada was host to the 1976 Summer Olympic Games.  I was 5 years old at the time and don’t remember much about it, but apparently after the Olympics were over part of the competition facility was turned into a Formula 1 racetrack.  Known today as the Circuit Gilles Villenueve, it is a 2.71-mile ribbon of asphalt with 13 turns and about zero runoff room for cars that suddenly go astray.  Multiple high-speed straights are followed by incredibly slow corners, making the course massively demanding on the brakes but hugely rewarding for precision, finesse, and bravery behind the wheel.  It’s as flat as the man-made island it’s built upon, without even 5 feet of elevation change from end to end.

Generally, a Ferrari Challenge weekend consists of a full test day on Thursday followed by multiple official practice sessions on Friday.  This is designed to get drivers who have never been to a particular circuit practiced up a bit before Saturday morning’s qualifying session.  Given that this weekend we were sharing the track with the Formula 1 Canadian Grand Prix, there would be none of that.  The two very short practice sessions on Friday were the only opportunities that I would have to learn a track that I had never experienced before in my amateur racing career.

As you should recall from our first 2017 race report, the crew from Risi Competizione was again present to tend to the care and feeding of the car.  And me too, I suppose.  Last time around we didn’t call anyone out by name, but that’s about to change:

Scott can best be described as the mother hen of the operation.  It’s essentially his role to make sure that everyone else is performing their roles.  He also makes sure that I am suited up in my “pajamees” when the call to grid takes place.  Arguably, his most important job of the entire weekend is keeping the meddling driver away from the toolbox (James, put down the wrench and walk slowly toward the trailer, please) and preventing the same meddling driver from distracting the rest of the crew who are getting the “real” work done.

Billy and Javier are the muscle in the paddock doing the “real” work.  Whether it’s putting up the canopy, setting the alignment, or getting me strapped in to the car on the false grid, there really isn’t a single aspect of the weekend in which they are not acutely involved.  I am proud of the fact that both have now received formal ASE Hello Kitty Installation Certification and in the near future may be cut loose to apply without adult supervision.  And while I will sing their praises in the newsletter here, one of them was responsible for running over my favorite Oakley sunglasses with the pit cart (see The Damage Report above). 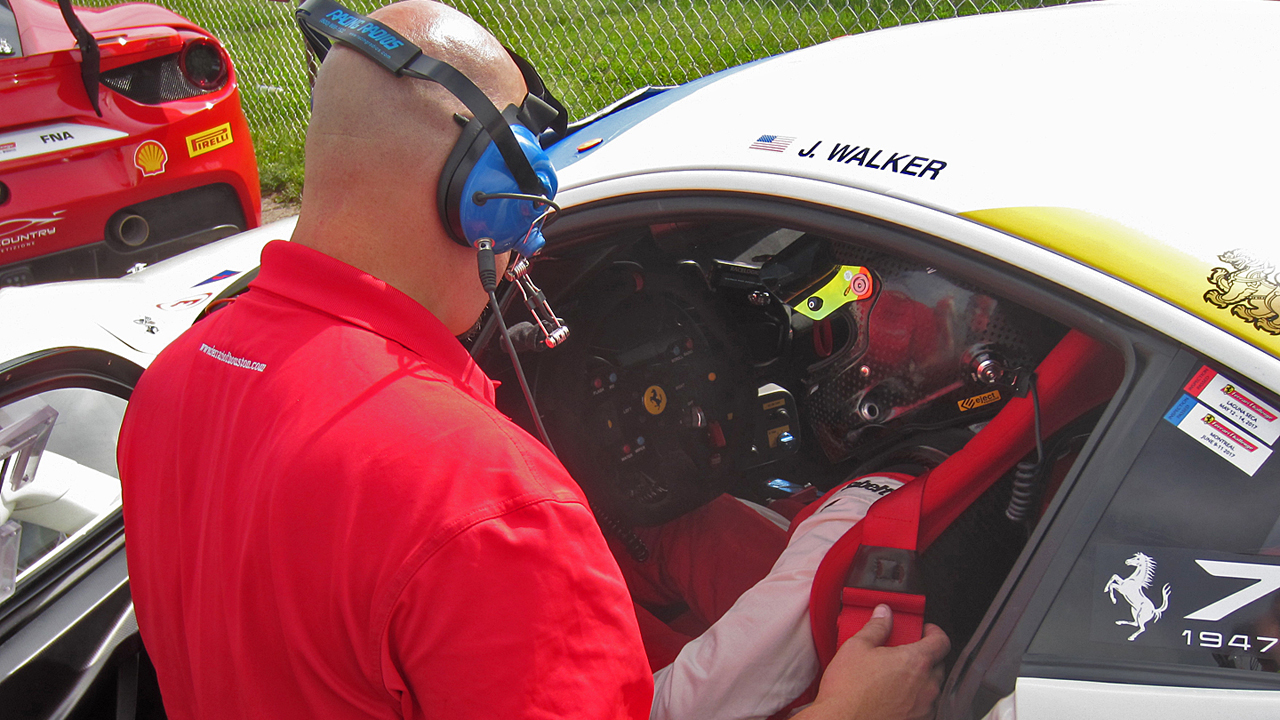 Truckie Mike is exactly that.  Which means he’s much more than that.  Certainly he has a critical role to play in driving the transporter across the country, but I am 100% confident that if Mike were not around we would never know how much fuel was in the car.  Which sounds like a trivial thing until you realize that it’s really not.  He also speaks exactly what is on his mind, which is oftentimes what the meddling driver needs.

Last time you met Rick, he was described as the little voice inside my head at Laguna.  While his typical title is something like “Race Engineer,” at this event his title was changed to “Sorry, But I’ll Be In France Trying To Win The 24 Hours of Le Mans.”  Which I guess is understandable.  To his massive credit, between e-mail, text messages, and phone calls, we had all the engineering and strategy support we needed.  This could be a good time to insert a line or two about the meddling driver picking up some of the engineering slack, but would that be in bad taste?

Friday practice was limited to two brief 25-minute sessions.  For a first-time driver at the track, that was barely enough time to learn where to turn left and where to turn right.  It wasn’t quite enough time to figure out where to brake.  In spite of that, lap times fell continuously over each subsequent tour around the circuit.  By the end of the day we were the sixth-quickest car in the field of 16 458 Challenge EVO competitors, but our 1:46.1 lap time was far from the mark.  That kind of performance wasn’t going to do the trick on Saturday.

And now for something different.  After several technical exchanges with the French Connection, all parties involved agreed that the secret to reducing lap times was not to be found in fiddling with the car setup, but rather in fiddling with the meddling driver.  Data was studied, video was reviewed, and the motivational therapy kicked into high gear.  And just in case that wasn’t enough, Billy applied stripes of Hello Kitty duct tape to both rear-view mirrors.  Always good to have a back-up plan. 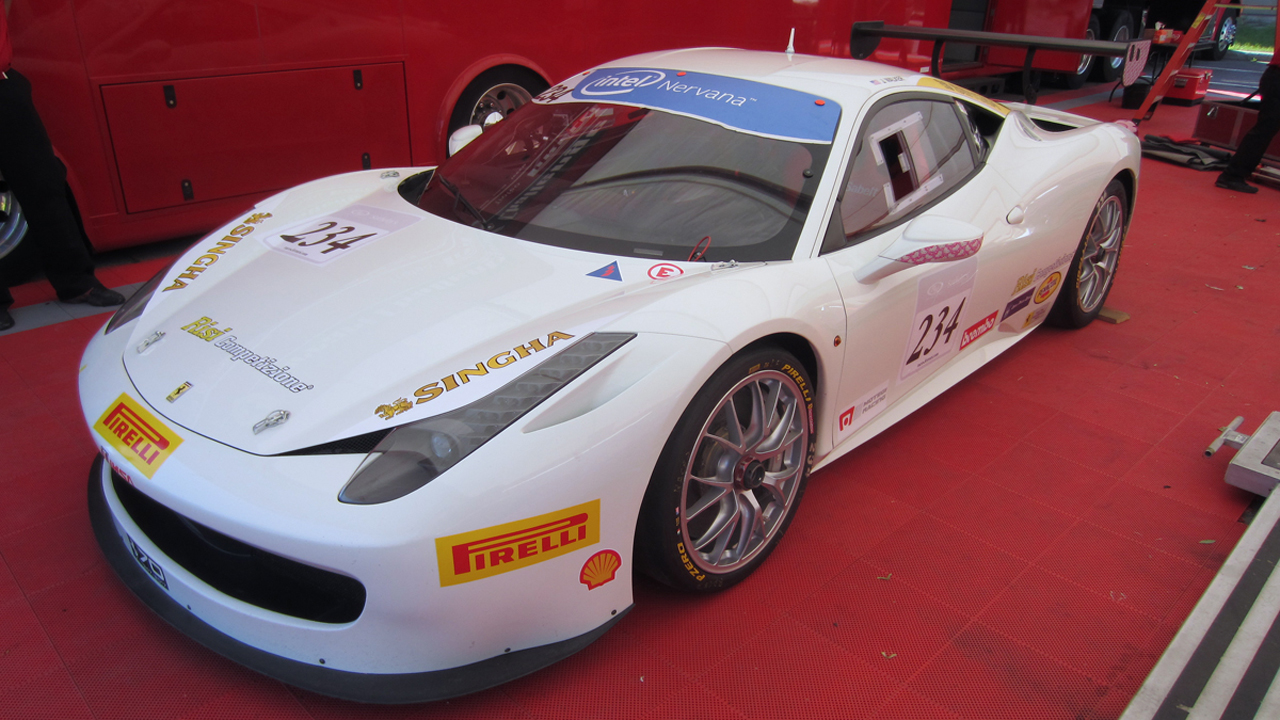 While the first several laps of qualifying were spent picking through traffic, with one lap to go a time of 1:43.1 was posted on the leaderboard.  And just like that, Risi Comp #234 was sitting on the 458 Challenge EVO pole for the start of Race 1.  By a scant 0.087 seconds.

With a total of 42 cars on the grid, 16 in our class, there was much anxiety about the potential fiasco in Turn 1.  The stewards shook their fingers during the driver’s meeting and essentially told us point blank that they expected no first-lap shenanigans that would result in cars flying back and forth into each other as they had done at Laguna Seca the month before.  Adequately admonished, somehow all 42 cars made it through Turn 1 without incident.

Our individual start was lukewarm at best.  Starting on the right-hand side of the track, the inevitable backup that ensued resulted in a loss of position by the end of the lap, but still within striking distance of the race leader.  Five laps of drama-free lapping in 2nd place (P2) was brought to an abrupt end when a full-course yellow bunched the field up for a restart with four laps to go.

Upon restarting we maintained P2, but that then came to an abrupt end when the P3 car directly behind us attempted an overly optimistic pass going into Turn 3.  If you watch the linked video starting at about the 17:30 mark, you can see it from the perspective of the bullet vehicle.  Thankfully the impact did not cause any significant damage to #234 other than a crushed right-rear fender (but no, you don’t want to know how much that will cost to fix), but out of an abundance of caution the car was limped home over the remaining three laps to a 5th place finish.  In case you’re wondering, that’s not on the podium. 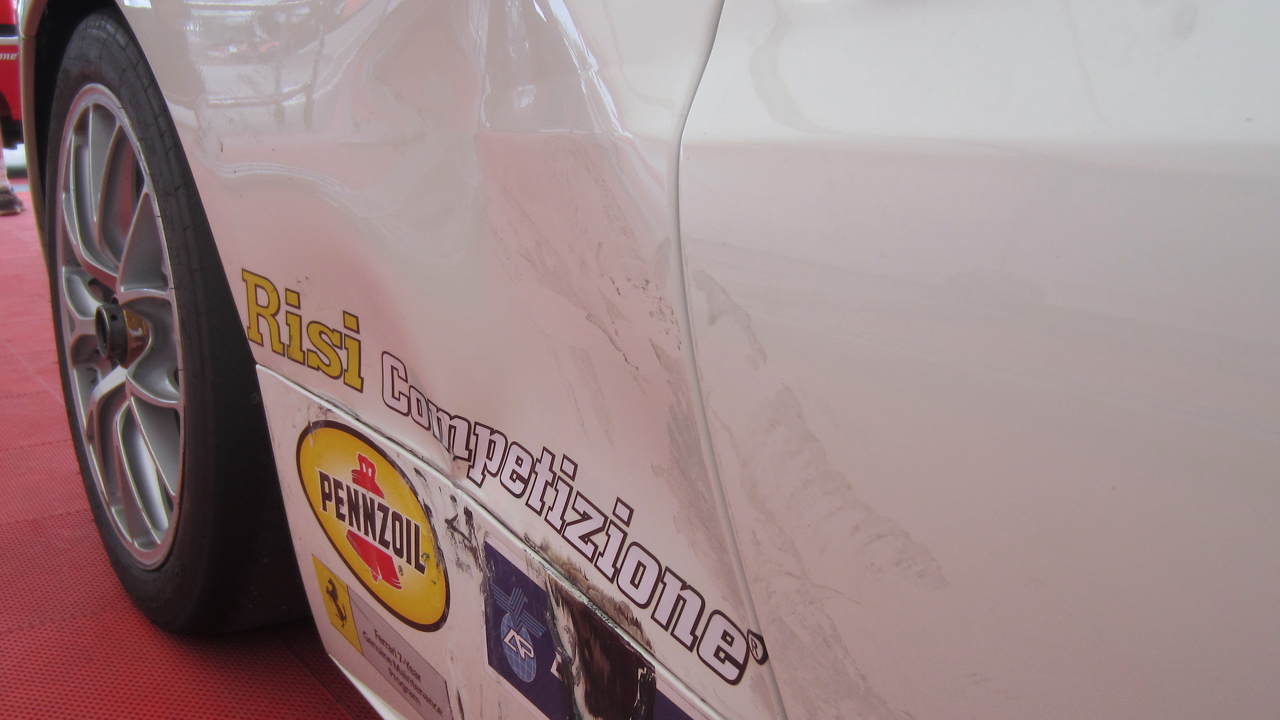 The starting grid for Sunday’s race was not set by qualifying times, but rather by the finishing order from Saturday’s race.  Our 5th place finish was still toward the front of the 16-car field, but due to mixed classes competing at the same time, we were positioned 17 cars behind the 458 Challenge EVO pole sitter.  Clearly, our work was cut out for us.

Although heroic efforts were not required, Billy and Javier were able to confirm that Saturday’s Turn 3 shunt was not significant enough to have caused any trouble to the chassis, so only a few adjustments had to be made to the car for Sunday’s race.  With the exception of a small electrical issue that surfaced (and was subsequently remedied with a little bit of help from the meddling driver, I might add) late Sunday morning, all appeared to be A-OK for the start of Race 2. 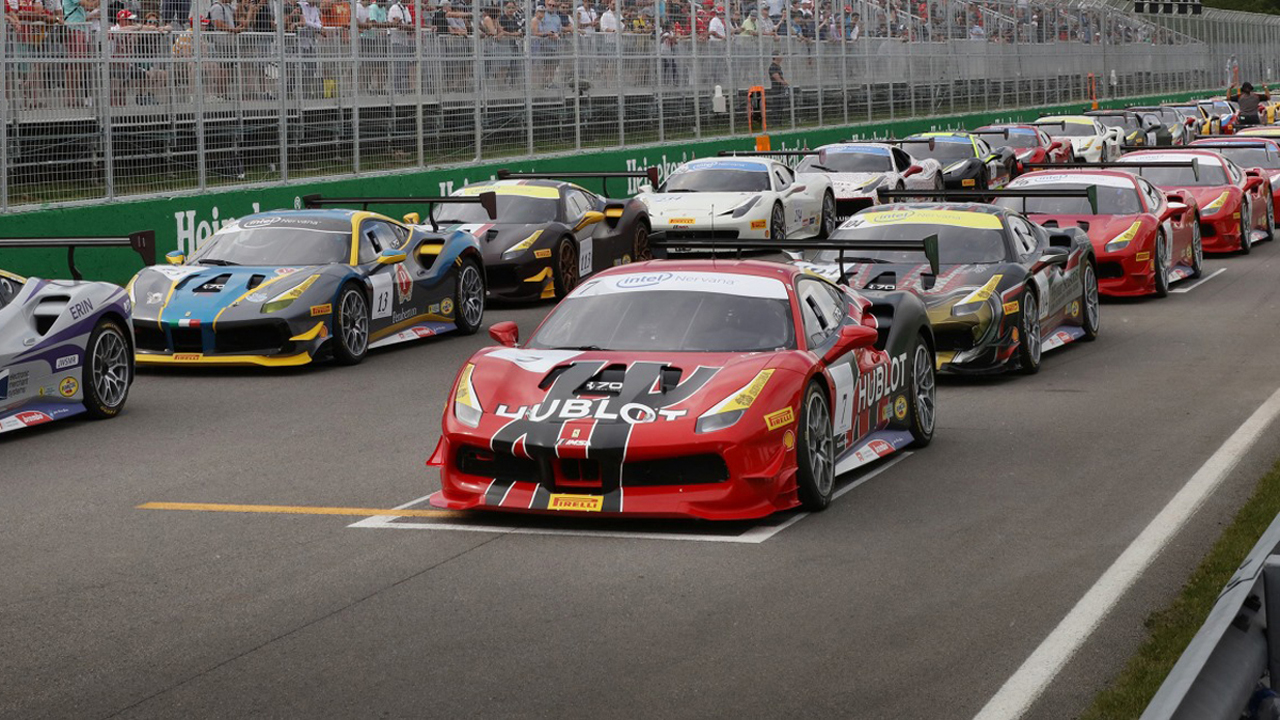 Starting from much farther back in the field this time, there was no way to see the green flag as it flew.  However, that didn’t stop us from passing the car in P4 in Turn 3 and passing the car in P3 in Turn 12.  By the time we had come back around to the start/finish line, we had firmly put the car on the short step of the podium, but our work was not yet done.  With 14 laps to go, it was time to turn up the wick.

Over the subsequent four laps, #234 kept finding speed.  While chasing down the cars in P2 and P1 we ended up setting the fastest lap of the race, but we were not chasing the stopwatch, we were chasing the top step on the podium.  Shortly thereafter, P2 was put in the rear-view mirror and not too long thereafter the pass was made for the lead.  As we passed start/finish on lap five we were leading the race.

But then, another abrupt end.  Going into Turn 1, the car in P2 attempted a pass on the inside.  Which was just fine, until it wasn’t.  In attempting to outbrake us, he shot off the end of the track and into the runoff area.  Watching this all play out in slow motion (that tends to happen in the heat of battle), it was a simple matter to turn in behind his mistake and continue to put distance between us as we stretched out the lead.  At least, that was the plan.

Inexplicably, instead of collecting up his car and safely re-entering the track at the designated location, the driver chose to cut across the grass to re-enter the track, mid-apex, at racing speed.  That would have been a great idea had #234 not been occupying that same piece of real estate at the same time.  Striking the right-rear fascia behind the rear wheel was sufficient to spin the car completely around and brought us to a complete stop on track.  Thankfully our damage again was purely cosmetic (but no, you don’t want to know how much that will cost to fix), but the loss of time resulted in a loss of track position as the car in P3 motored by the mess and left us far behind as he assumed the lead.

While we were able to get the car moving relatively quickly and confirmed that the chassis felt none the worse for the impact, another full-course yellow sprung up (that’s a recurring theme here, in case you have not picked up on it) and lasted until the end of the race, precluding us from making any attempt to race for the win.  The second-place finish was bittersweet, but a podium is a podium, and our eye is on the overall season championship, if not necessarily individual race wins (although, yes, that would be nice at some point).

Unfortunately, we will need to miss the July race at Mosport, so the next race for #234 will be Road America in Elkhart Lake, Wisconsin, on August 12-13.  It will be nice to finally show up at a track where I have raced previously, so the learning curve should be greatly accelerated.