After almost eight months of rest, relaxation, and rebuilding, team scR took to the track this past weekend at the Mid-Ohio Sports Car Course.  With so much time out of the seat, the team certainly expected the cobwebs to be hanging around for most of the Double Regional, but it didn’t take long before the red SC2 was up to speed once again.  Looks like we’re in for another exciting year!

Following the ARRC in November, the race car was unceremoniously parked in Tom’s garage until we pulled off the cover in March.  Unfortunately, we were greeted by a quart of power steering fluid on the floor and a heavy layer of dust, but otherwise the car was ready for surgery.

Since we suspected that the early demise of the power steering system was related to the high-RPM operation of the ITA-spec motor, we elected to fabricate underdrive pulleys to slow things down a bit.  Ironically, this turned out to be the biggest engineering project of the rebuild – trying to find a belt to work with our custom combination of water pump, alternator, and power steering pulleys was a challenge all its own.  The final product, however, is a work of art…the guys at Big Sky Motorsports sure can spin up some beautiful parts when needed.

Phase two involved working with the R&D lab at Energy Suspension to develop a complete chassis bushing kit.  While the installation went relatively quickly, a few bugs are still being ironed out for production.  Word on the street is that bushings should be available for sale later this summer, but our prototype set has been nothing but perfect so far. 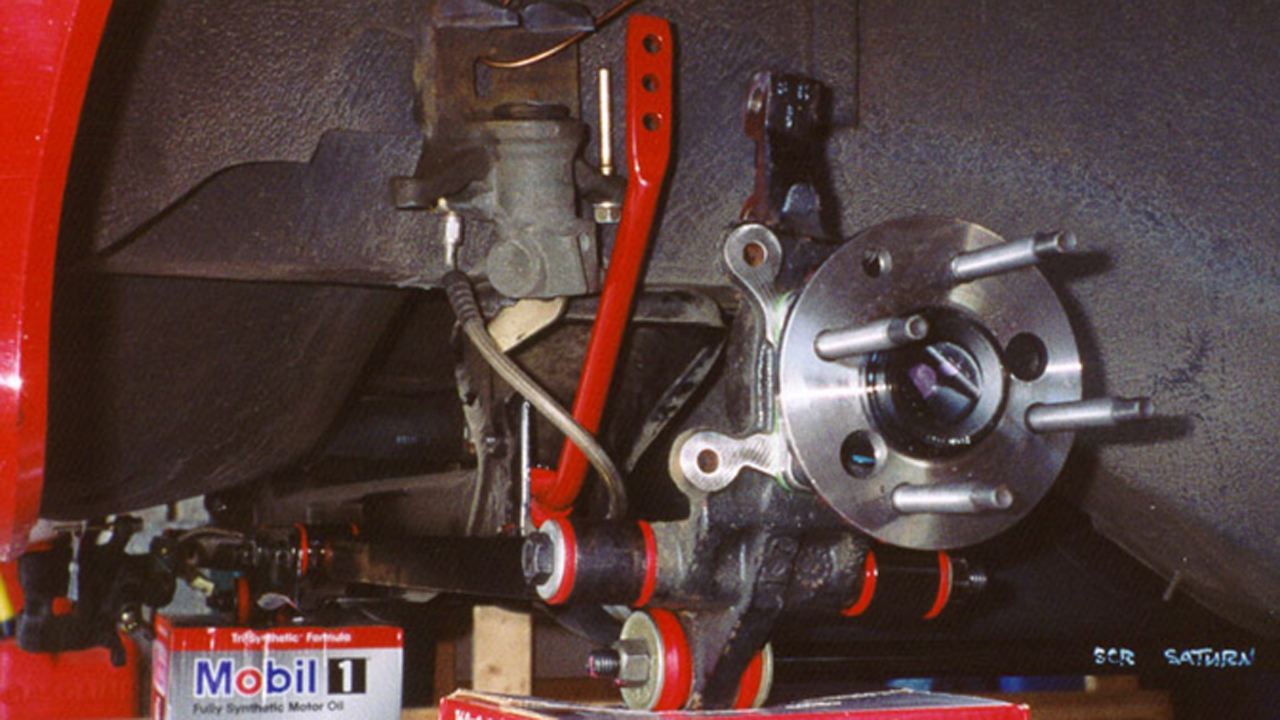 Phase three focused on addressing our horsepower-to-weight ratio.  Taking advantage of new rule changes for 2001, we managed to remove an additional thirty pounds from the car, bringing us right to our minimum weight!  To help things out even more, the guys at Big Sky stepped up again and built revised intake and exhaust system components which shaved another ten pounds while bumping us up another three horsepower.  Time to see how this thing runs!

For our first event of 2001 we were teamed up with two familiar faces.  Mark Rushbrook and the R^3 Motorsports team (that’s short for Rushbrook Racing Research) had their #21 SC2 locked and loaded for the new season with a Womack-built motor and a Quaife differential, bringing it to the same spec as the #34 car.  Vaughan Scott of PUB Racing (don’t ask – it’s a Porsche thing) had his 924 running at 100% and was ready for his first run at a “big” racetrack.  Everyone had their sights set high as we slowly headed down to the false grid.

Picking up where we left off last year, rain began to fall on the windshield as we idled through the paddock.  This was not a surprise, as it had been raining off and on all morning, but of course we had committed to our dry tires and chassis set-up for the session.  Here we go again.

As we headed out on the track, we quickly discovered that the racing line was dry enough to turn in relatively fast lap times, so right foot to the floor!  One by one the cobwebs were swept away as the #34 picked its way through the qualifying field.  Due to the changing conditions and the large size of the field (thirty-two cars, all in ITA!), we were never able to turn in a real “flier,” but still managed to qualify 4th in class.  Not bad for a thirty-two-car field. 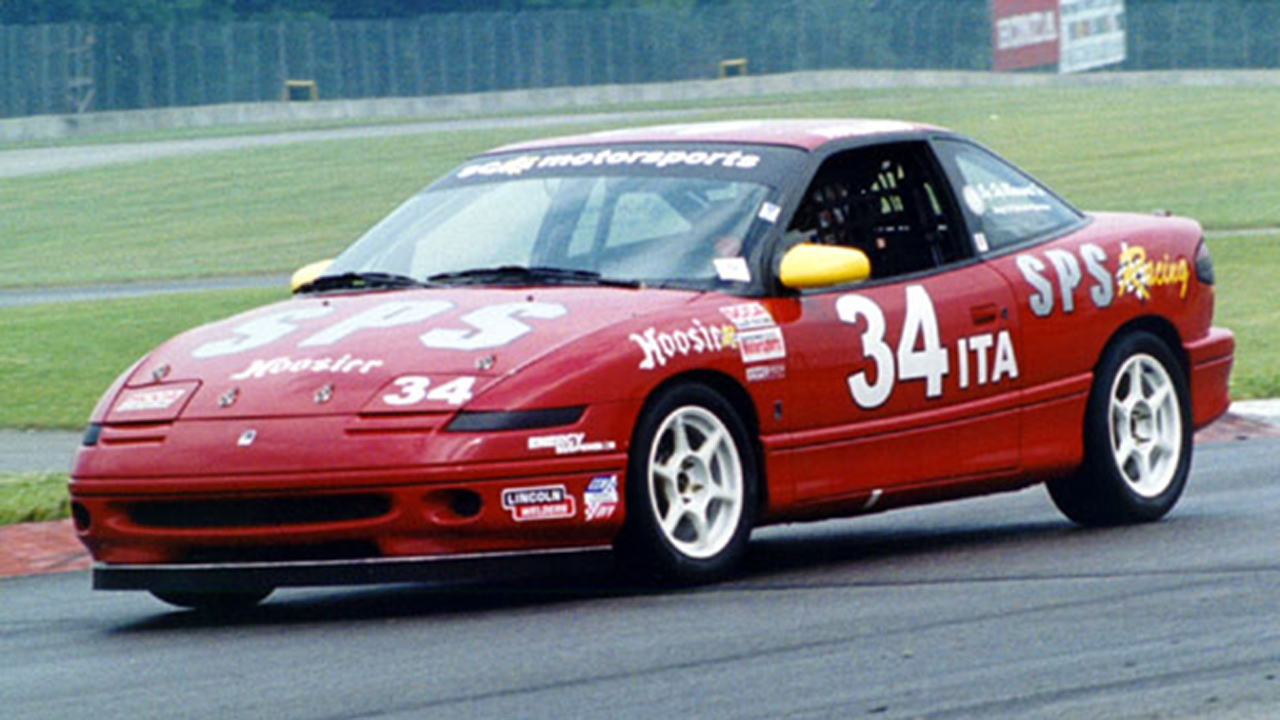 Unfortunately, while the #34 car was making progress through the field, the #21 car developed a case of the “oil doesn’t want to stay in the engine” syndrome.  Waving away billowing oil clouds, the R^3 crew discovered that an oil line fitting had come lose and had deposited several cups of oil across the engine, transmission, cradle, and, well, you get the idea.  Three cans of Brakleen, two rolls of paper towels, and four hours of scrubbing later the team was ready to head back out, but their truncated qualifying session left them 30th on the grid, right behind Vaughan and his Porsche.

Not that both teams didn’t have enough to do already, both SC2’s managed to violate the SCCA’s maximum noise level of 103 dB (both cars blew 105’s).  Remember those fancy Big Sky exhaust systems?  They were removed and replaced with last year’s hardware…boo hiss.  Take away two HP and add ten pounds, please.

In so many words, the Saturday race was boring…at least from our seat.  At the start we very quickly fell into single file formation, neither gaining nor losing any positions.  On lap two, the #9 car in running in third place spun in turn 13, allowing us a short-lived podium opportunity.  That would be erased, however, as he made up the time and then some, relegating us to finish where we had started – fourth.  But hey, we were just shaking off cobwebs, right?  Our best lap time, a 1:47.9, was still over one second faster than we had run in qualifying. 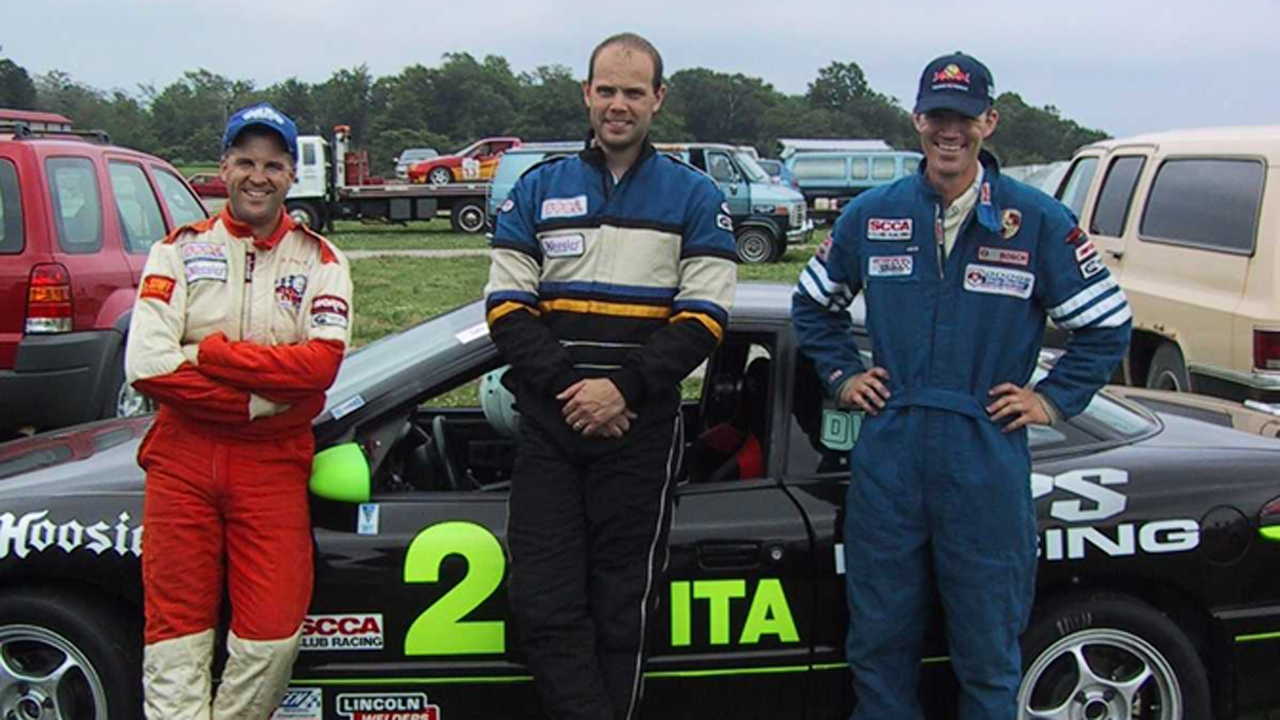 Back in the pack, the R^3 Motorsports team was running a 1-stop strategy.  After moving up from 30th to 22nd in two laps, Mark brought the #21 into pit lane to pop the hood and look for oil gremlins.  None were found, so John slammed the hood and sent the car back out on track.  Over the ensuing ten laps, Mark would have a blast, passing eleven cars on the way to his 20th place finish!

The evening was spent telling tall tales over Sam Adams at the Outback.  Mark’s lap times would have placed him in the top eight that afternoon, so the expectations were high for a pair of Saturns in the top-five on Sunday.

On Sunday, the rain was thoughtful enough to wait until the 5-minute warning was given on the false grid to fall.  No joke.  A collective sigh was heard from the field as we stared in amazement at the rain falling in spite of the sunshine.  Like Saturday, however, the track was clear and dry as we ran out to turn in our best times possible.

Midway through the session, the #34 and #21 cars were separated by a lone Honda CRX, but the miniature freight train ran laps clear of traffic.  Positions were swapped sparingly as the group tried to work together to make the best of the open track.  The #34 car developed a push early in the session that never went away, but without time to make an adjustment we simply drove around it the best we could.

When the results were posted we were disappointed to see that we had fallen to 5th on the grid, but we were starting right next to the #21 car in 6th!  Row three was a Saturn convention in the middle of Honda land.

And that, ladies and gentlemen, is how the race ended 8 laps later.

So, for our first outing of the season we came home with a 4th and a 3rd, kept the car in one piece, and managed to avoid the rain which fell in buckets immediately after we left the track.  Mark and his team solved their oiling issues, ran in front all day, and only needed to stock up on Brakleen for the next event while Vaughan took copious notes on how to go fast on a “big” track (hint: engine).  What a great weekend!

All that’s left to ask is, “What’s next?”  Since we love Mid-Ohio so much, our next outing will be July 27-29 back in Lexington.  We should have another small trick or two up our sleeves (we need to make that new exhaust system work!), but even if we keep running at this pace all year, that’s not such a bad thing either.