Elsewhere on this website we have discussed (in painful detail some would add) the importance of front-to-rear bias, or brake balance, and how its optimization can lead to better braking performance. However, one critical factor in establishing bias – the mechanical brake pressure proportioning valve – was left out of the discussion. After all, one can only take so much of this brake bias talk in one sitting.

That said, we are back to share the intricacies of just how brake pressure is distributed to the front and rear of the vehicle. More importantly, we hope that you take away the understanding that replacing, modifying, or just plain fiddling with your proportioning valve can do more harm than good. While it is not quite black magic, there are plenty of opportunities to throw the system into disarray without even knowing it.

Consequently, we offer this quick look into these devices and their mechanical siblings. A small amount of knowledge can yield surprising benefits, not the least of which is avoiding nasty surprises.

In general, there are three ways to deal with rear brake pressure: leave it alone, make it proportional to the front brake pressure, or control it in a way that combines these two strategies. 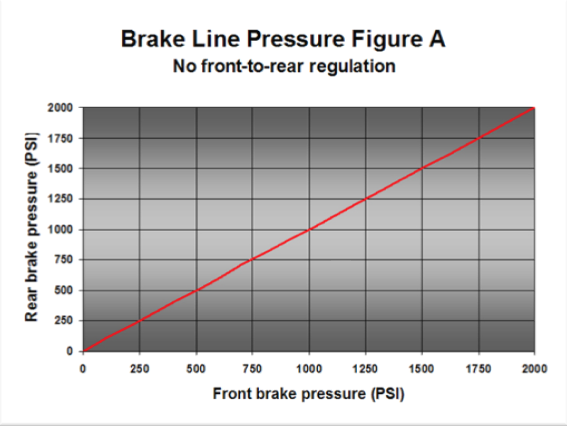 As you can imagine, this is not a realistic solution and is not found in the real world. 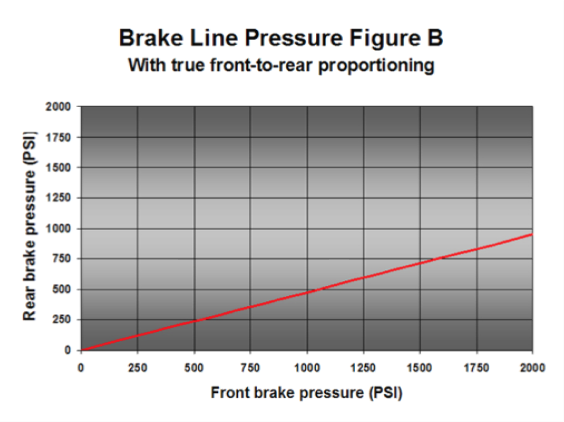 This type of pressure regulation is certainly possible to achieve, but it typically requires tandem master cylinders and an adjustable reaction linkage, the same setup found on nearly every purpose-built racing car today. 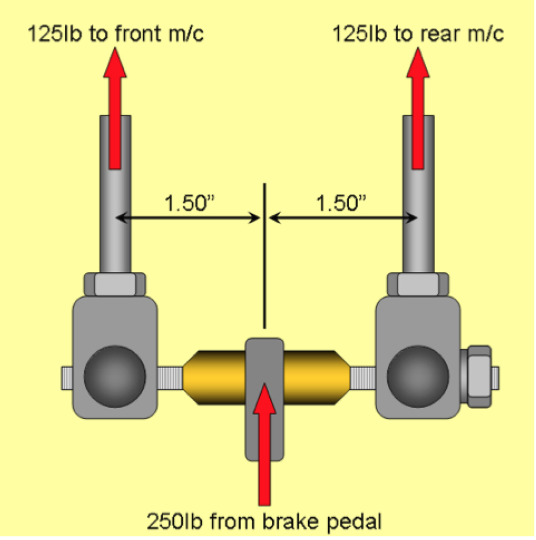 On vehicles so equipped, the proportioning ratio is achieved through a combination of master cylinder piston diameter selection and the adjustment of a mechanical reaction linkage that connects the two master cylinders. Also known as a bias bar, the linkage geometry determines the front-to-rear force distribution coming from the brake pedal assembly. The significant benefit to this set-up is that a bias bar can be designed in such a way that the driver can adjust the front-to-rear proportioning ratio while at speed.

In the example shown below, an adjustment of the bias bar of 0.010 inches results in an increase in front master input cylinder force from 125 lb to 133 lb. At the same time, the rear master cylinder input force drops from 125 lb to 117 lb. 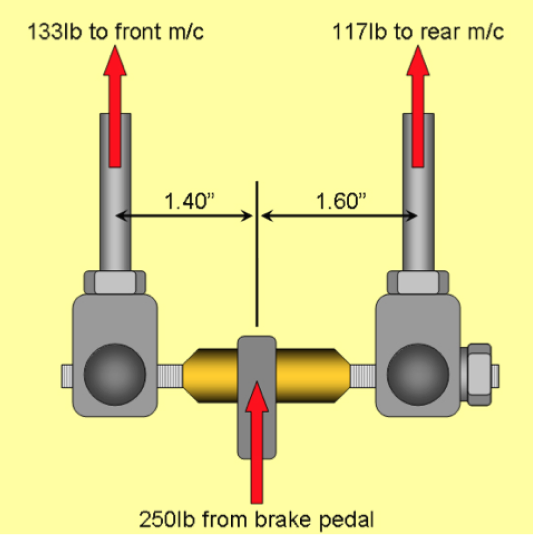 Real-time driver control over bias makes adjustments for changing track conditions or fuel load practically effortless. The complexity of this design makes it highly impractical for street use, but on track it simply cannot be beat for ease of adjustment.

Conventional proportioning valves should really be referred to as “braking force regulators” or “brake pressure regulating valves.” While their name might imply true proportional control, in reality they provide a combination of the control found in Figures A and B.

Up to certain pressures, these valves allow equal pressure to both the front and rear brakes (à la Figure A). However, once a preset pressure point is reached (600 PSI in the example), the rear brake pressure continues to build, but at a slower rate (or slope) than the front brake pressure. Figure C displays this for us quite clearly. 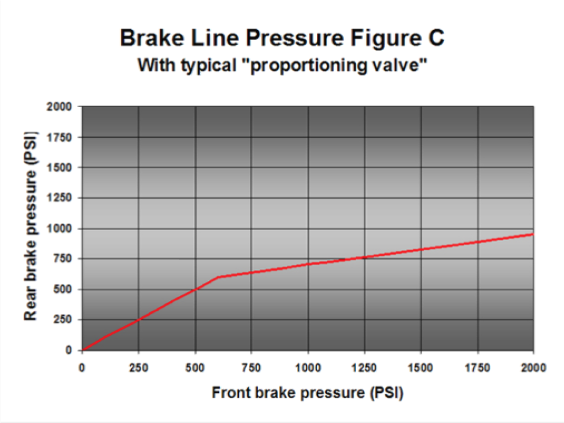 Looking at the diagrams, one can see that it is possible to design both a Type B system and a Type C system that ultimately give the same brake balance at the point of maximum deceleration. (Note that Figures B and C both generate 950 PSI of rear brake-line pressure when the front brake-line pressure is at 2000 PSI.)

However, one can also see that Type C systems—those that use proportioning valves—can bring us closer to optimum balance at lower deceleration levels. This benefit is relatively meaningless in a racing application, as the vehicle is always operating at maximum decelerations, but it is of great advantage on the street.

In so many words, the proportioning valve allows us to drive around town under optimized brake-balance conditions (good for front brake-pad life) but also keeps everything in check when we need maximum braking (good for stability).

Due to their compact size and relatively low cost, these devices can be found on nearly every vehicle which requires rear brake pressure reduction to achieve optimum brake bias. Typical passenger cars and production-based race cars fall neatly into this category. 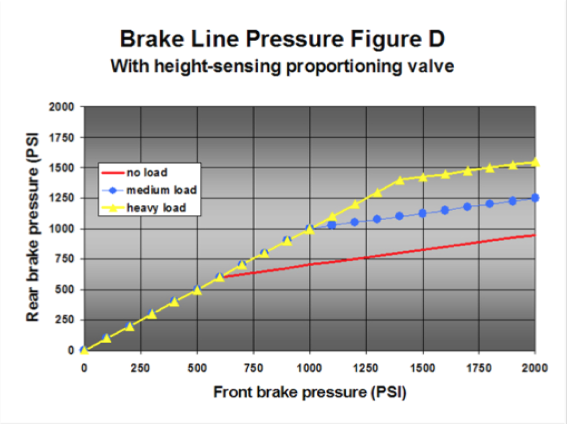 So, Can One Adjust The Proportioning Valve?

Believe it or not, in nearly all cases the OEM valves are well matched to the original brake system and should not be tampered with, as there are no parts inside that are able to be modified by ambitious owners. Unfortunately, some are externally adjustable, so the temptation to tinker is right there in front of us!

One point to ponder is that because they are a mechanical device, proportioning valves must be designed as a best compromise for use under all conditions. High speed, low speed, fully loaded, and empty vehicle scenarios must all be evaluated and figured into the proportioning valve design.

Of course, if you have modified your vehicle in a way that impacts front-to-rear bias you might be standing out in left field! As a refresher from our bias article, we will bring forward again the lists of modifications which can influence front-to-rear bias.

Factors that will increase front bias:

Factors that will increase rear bias:

We could start this section by clearly stating that you should not modify your proportioning valve. But, what fun would that be? In all seriousness, making changes to the proportioning valve to effect brake bias should be left to those with the proper tools and measurement devices, but if you have tweaked your vehicle beyond recognition, this may be your only solution to restore a sense of proper bias to your braking system.

We’ll start here with three of the most basic rules regarding proportioning valve installation and selection.

Selecting the correct adjustable proportioning valve for your vehicle entails not only selecting the proper point at which slope limiting begins (the knee point), but also selecting the proper rate at which rear brake line pressure builds after that point (the slope). Nearly every adjustable proportioning valve on the market today has an adjustable knee point (the point at which the rear brake line pressure begins to be controlled), but a fixed slope (the rate at which it builds beyond the knee point). While one parameter is adjustable, both are critical to system performance. Note that in Figure E the two curves have the same knee point, but the slopes vary greatly. 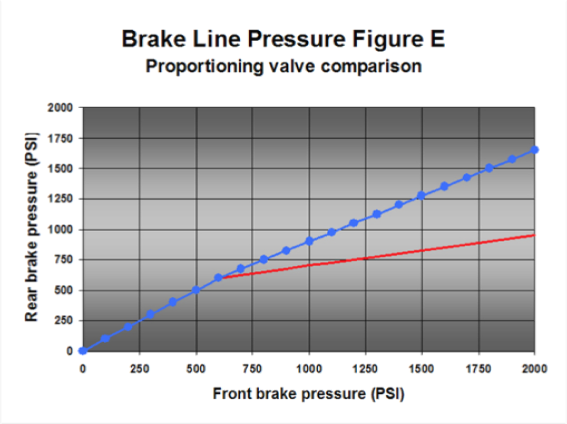 So how does one select the right knee point and slope? Without the test and measurement resources of a major automotive manufacturer, it’s next to impossible to say. Of course, you could trial-and-error your way into a solution that you believe to be appropriate, but without testing under all conditions of loading, speed, and road conditions there might be one operating condition just waiting to bite you.

In short, if you find yourself thinking, “I wonder how I would pick the right proportioning valve for my car?” you probably shouldn’t be changing it yourself.

As a small sidebar to the mechanical proportioning valve discussed here, there is a movement afoot to replace the proportioning valve function with the hardware performing the ABS function. While this is not yet the norm, most high-end performance cars already have this feature as standard equipment and one can predict with reasonable certainty that the trend will continue.

Based on information gathered from the four ABS wheel speed sensors, the Dynamic Rear Proportioning (DRP) or Electronic Brake force Distribution (EBD) algorithms calculate the front-to-rear slip ratio of the four tires. Then, given preset thresholds and parameters, the ABS hardware can intervene and modify the brake pressure going to the rear wheels automatically.

Because DRP and EBD are based on actual wheel slip and not on brake line pressure, this type of rear proportioning is more flexible and adaptable to modifications one might make to their vehicle. It is also less expensive, as the OEM can now remove the mechanical proportioning valve from the vehicle and replace its function with other hardware already on board.

Naturally, the OEM does not want owners fiddling with their front-to-rear proportioning, and as a result there is no way for the enthusiast to reprogram DRP or EBD to suit their desires. Of course, if the vehicle’s original front-to-rear bias is intact in the first place, there is no need to reprogram anyway.

In summary, there is more to the proportioning valve than meets the eye. You should make every attempt to carefully plan and select your brake modifications so that you are able to retain and reap the benefits of the stock proportioning valve. In other words, pay attention to (and don’t stray too far from) the factory bias in the first place and you will be ahead of the game.

If for other reasons you are forced to scrap the stock unit and replace it with an aftermarket unit, be advised that selection and adjustment are not for the uninitiated. While there is more than one way to achieve optimum balance at the point of maximum deceleration, without the right amount of know-how you might be making compromises under partial braking conditions that were not present with the factory hardware.

Again, remember that simply adding or replacing a proportioning valve may not be enough to remedy basket-case bias scenarios. Proper planning and up-front design should ensure that the base vehicle bias is appropriate from the start, enabling the proportioning valve to be used properly as a fine-tuning device.