Turns out that when you decide to make the jump into a professional road racing series, you will likely end up with things like “Corporate Partners” that want to share in the action and excitement.  You also are expected to do things like write “Press Releases.”  Having never written a “Press Release” in my life, I am not sure I am qualified to do that.  And most of the ones that I have read are kind of…dry.

So instead, let’s kick off 2019 with a proper scR motorsports newsletter, shall we?

A: Here’s a fun fact: this mailing list has been around for nearly 22 years.  If you’re one of the original 17 members of scR motorsports who received that first newsletter on March 10, 1997 at 8:59 AM (yes, I still have a copy), thanks for the stamina.  If you’re a recent addition, welcome to the team.  It has been an incredible run here at team scR, and I continue to be honored to share in the excitement with each and every one of you! 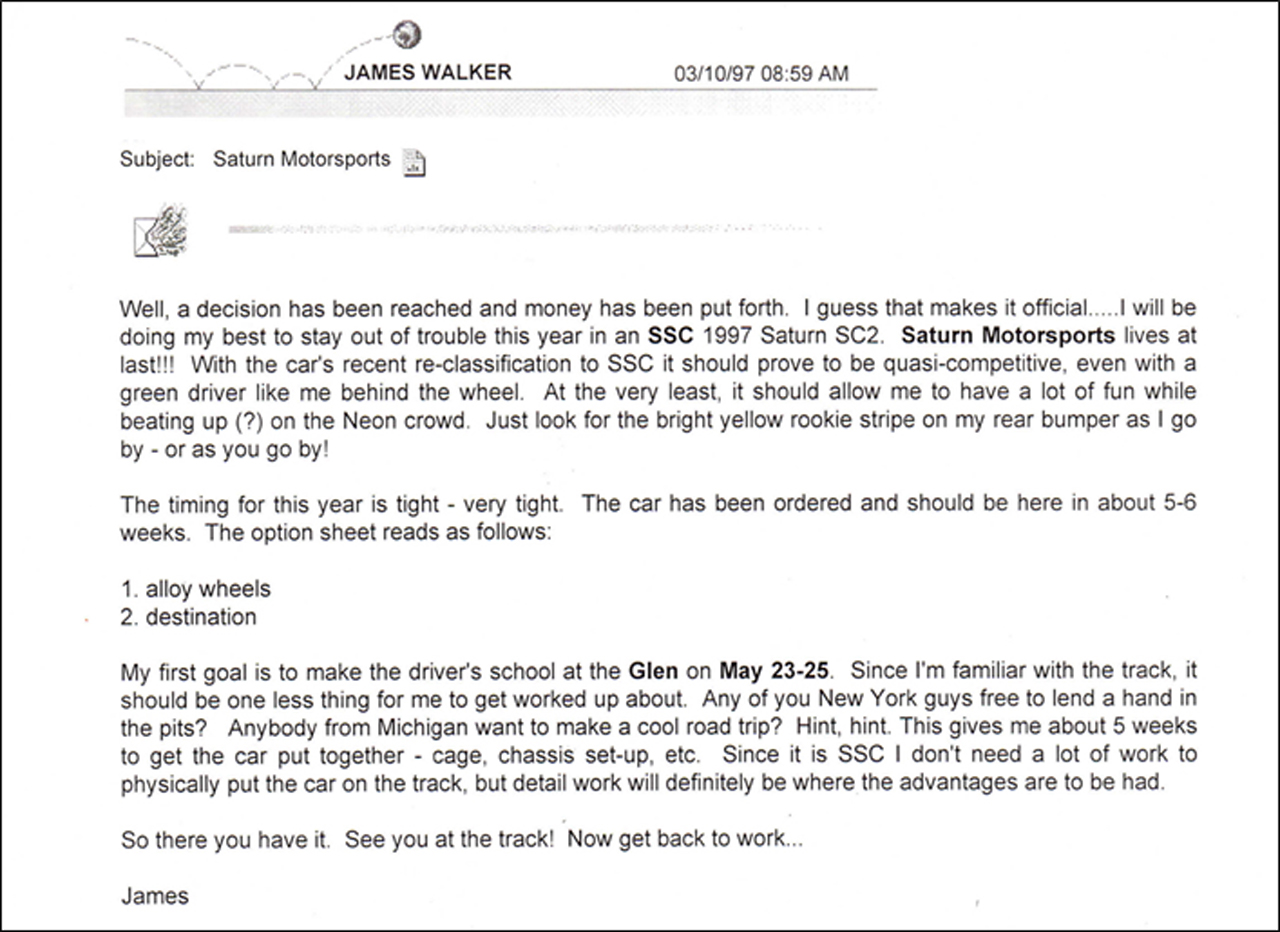 A bit of team history: the first team scR newsletter.

Over those 22 years, we have raced a $500 Saturn and a $500,000 McLaren.  And a bunch of fun stuff in between.  We have won races, set track records, and nearly captured a national championship.  We have also ended up upside down, run out of gas (twice in the same race, if you recall), and exhausted Target’s nationwide supply of Hello Kitty duct tape.  And while the team has changed and evolved with each subsequent season, the spirit, camaraderie, and competitiveness has remained constant.

Q: Are you done reminiscing yet?

Q: So, will you be returning to Ferrari Challenge in 2019?

A: Sadly, no.  As of three o’clock yesterday afternoon, the 458 Challenge car has been sold.  Hello Kitty end plates and all.  Long live #234, the fastest 458 Challenge car in the country.  And the only one with a Texas flag on the roof.  I loved that Texas flag. 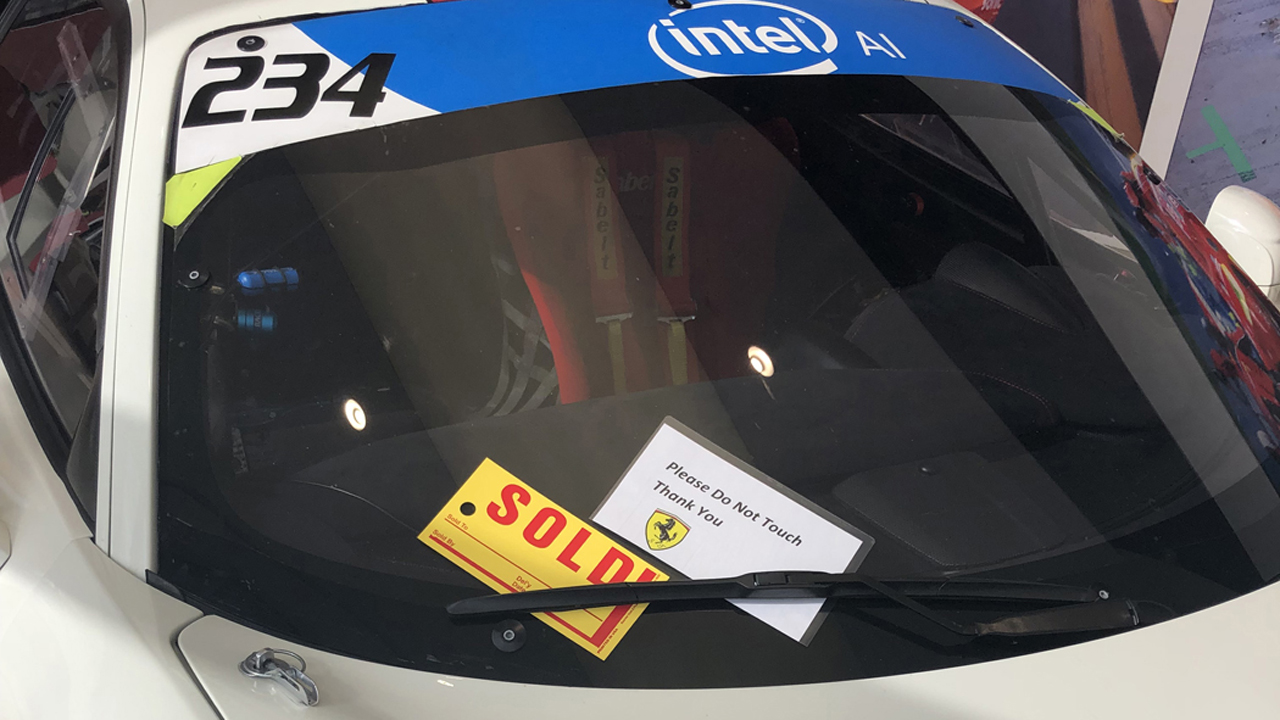 Gone but not forgotten.  There was nothing like the sound of that naturally-aspirated Italian V8.

It was an incredible two seasons, but as expected, the Ferrari Challenge series has moved on to the 488 Challenge car.  Can’t really blame them.  While we probably would have made another run for the 458 Championship had the car been invited back for another year of competition, that wasn’t in their master plan.

A: And now, for something completely different.

For the first time in the history of scR motorsports, we’re going pro.  The moment you have all been waiting for: 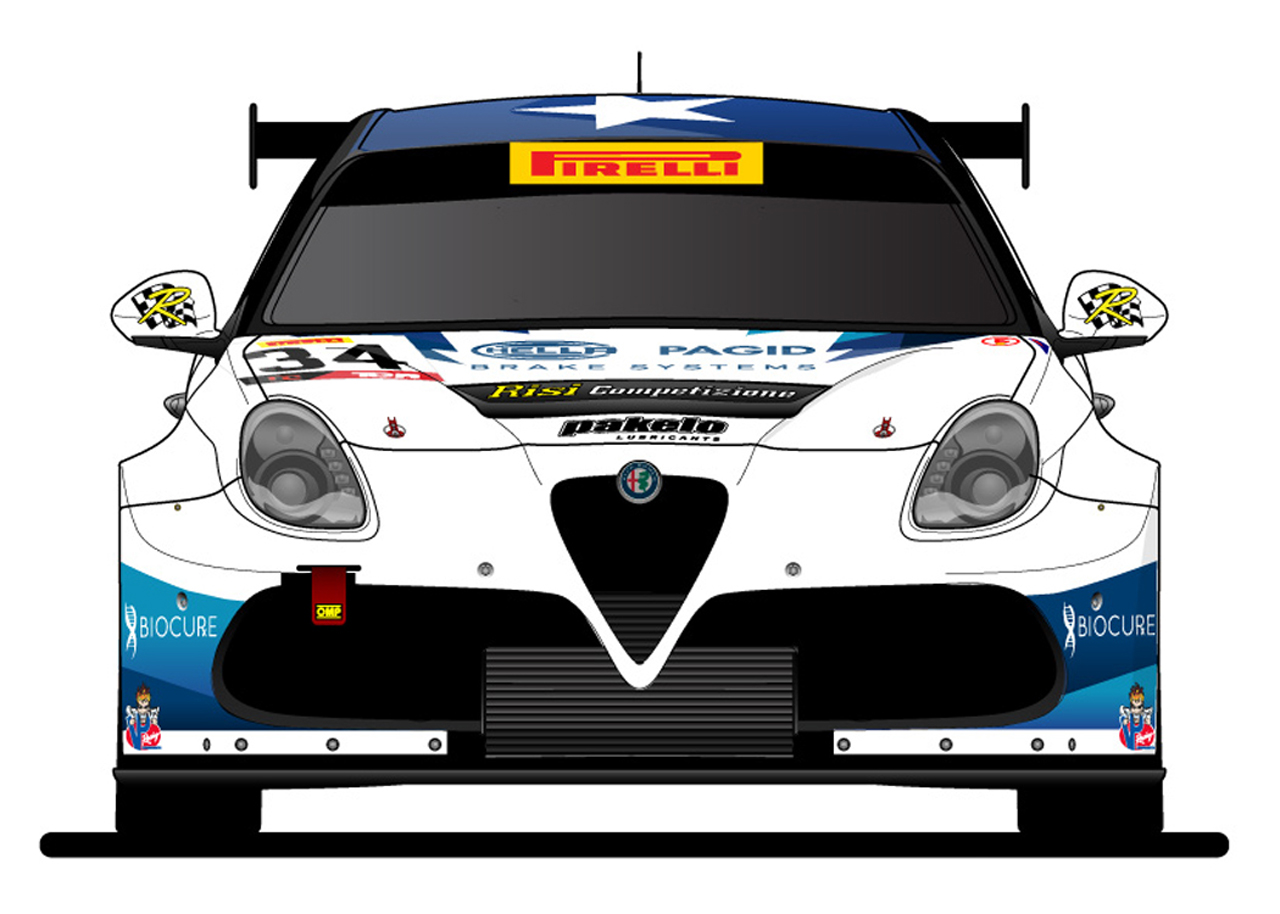 The 2019 grand reveal!  Where’s the confetti?  Renderings by Andy Blackmore.

Q: What the heck is that?

A: It’s an Alfa Romeo Giulietta TCR.  Never heard of it?  Not surprising, since you probably live in the United States (although we do have a few readers in Europe that might recognize the styling).  Here’s another rendering: 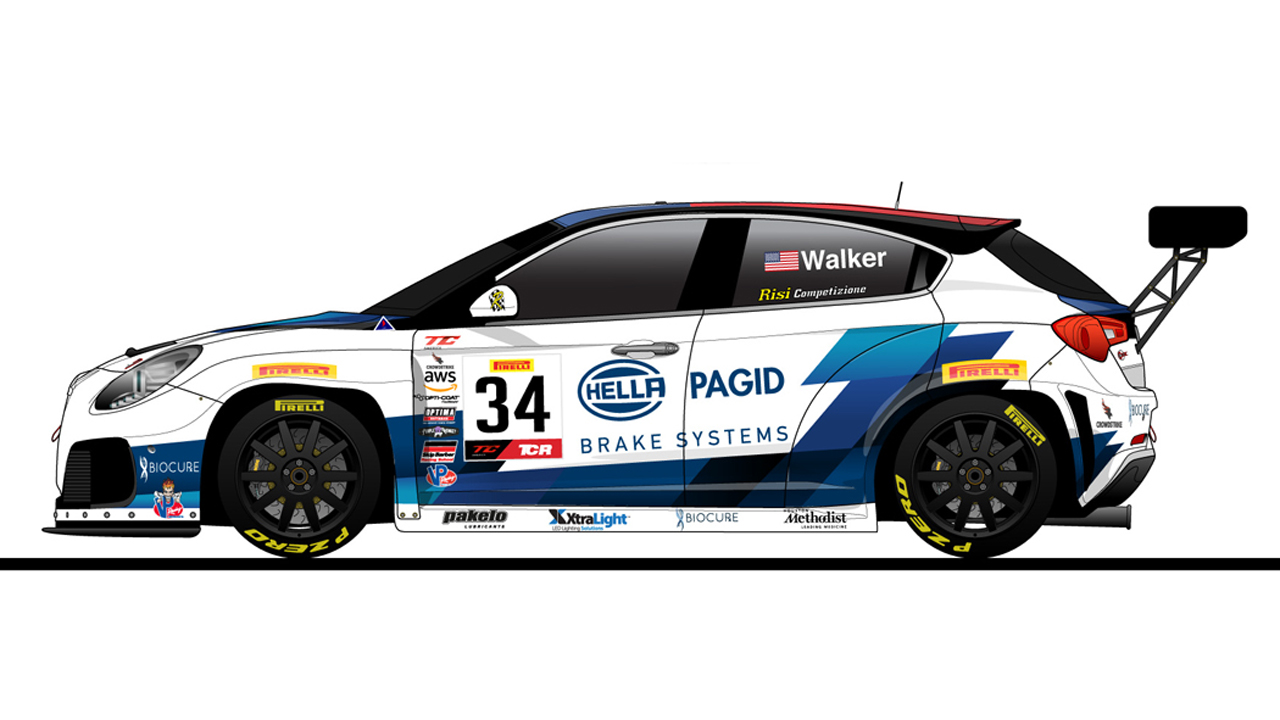 Q: I still have no idea what I am looking at.

A: Fair enough.  This year, scR motorsports (the team) will be entering the TC America championship (the series), competing in the TCR category (the car).  Sanctioned by SRO Motorsports America (had enough acronyms, yet?), our championship season will consist of 16 races distributed over 8 weekends across the United States.

For the past several years, the series had been called the Pirelli World Challenge, but it has had several other titles since its creation in 1985.  No matter what you call it, the TC America championship carries forward the banner of what has been the premier professional, production based, sprint format road racing championship in North America for well over three decades.  It’s under new ownership (SRO) for 2019, and we’re going to be on the grid wearing the familiar #34.

Q: What exactly is TCR?

A: TCR, or more formally Touring Car R, is simply a class of racecars.  The TCR category is a relatively new motorsports phenomenon that started in about 2015 or so.  In plain English, it’s a worldwide homologation, or recipe, for purpose-built racecars that generally adhere to the following formula:

The series is regulated internationally through what is called the “Balance of Performance” concept.  For the non-racing crowd, this essentially means that the regulating body can make performance adjustments in order to level the playing field.  For this reason, the vehicle’s minimum weight, maximum horsepower, and ride height can be changed from event to event based on its previous global performance.  In the end, the goal is to make for extremely tight racing between a large number of cars from different manufacturers. 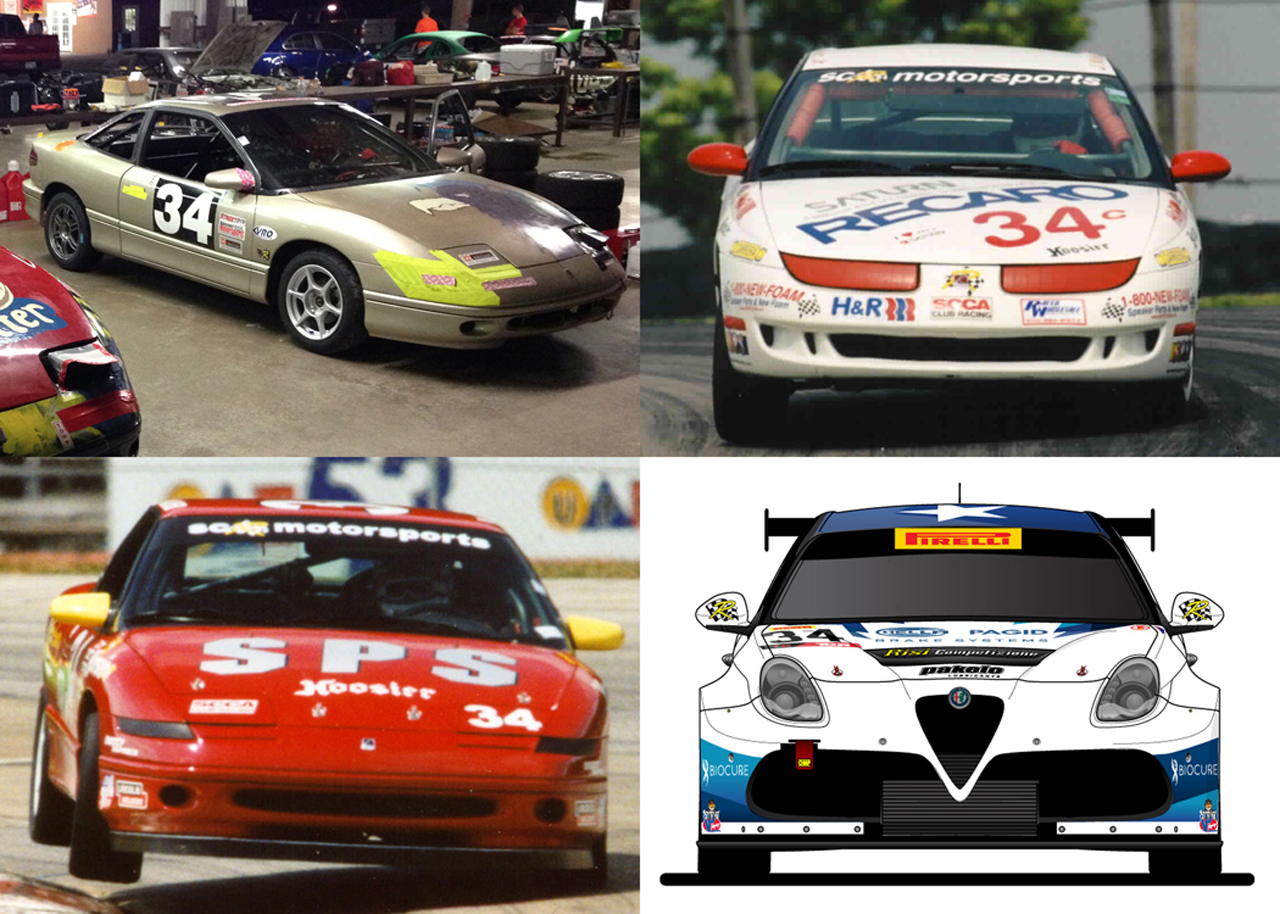 Team scR, front-wheel-drive, and #34.  Everything old is new again…but even more awesome.

Q: What are the specifics for the Giulietta?

A: The Alfa Romeo Giulietta TCR is assembled and homologated in Milan, Italy by Romeo Ferraris.  If you are creative enough, you can squint and see that the car is the result of genetically cross-breeding an ITA Saturn and a 458 Challenge car.  Sort of. 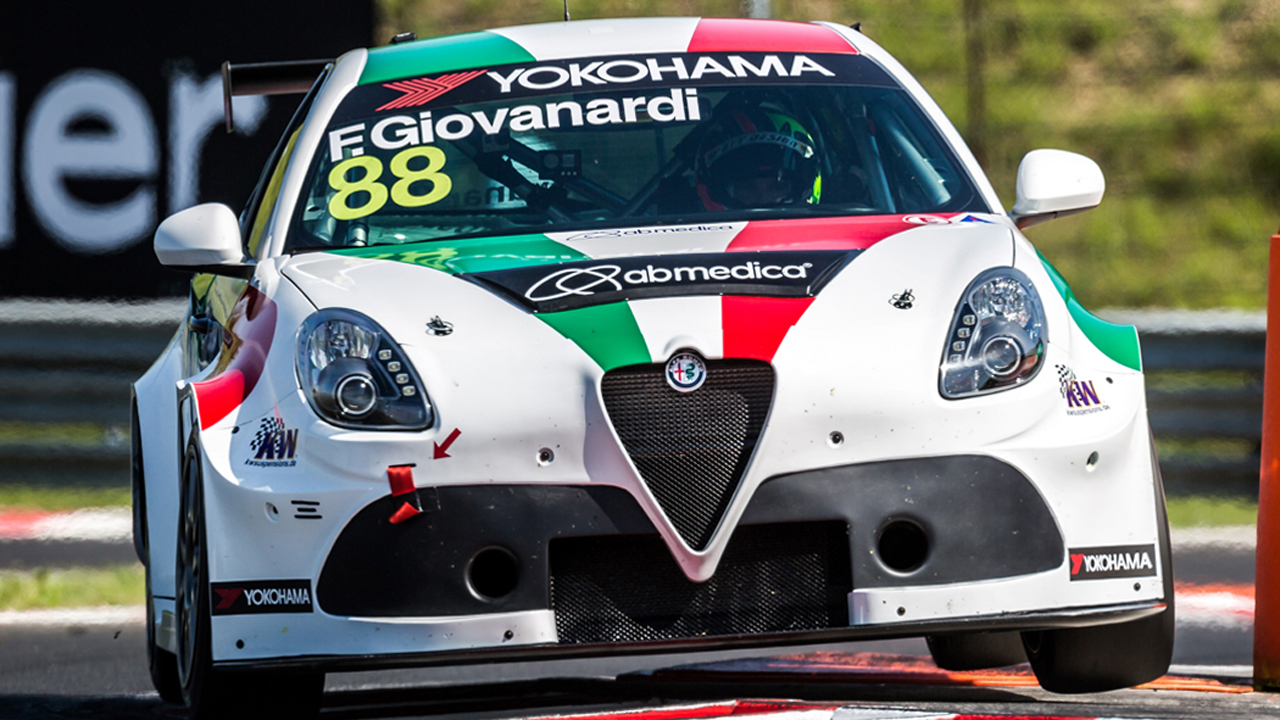 An actual Alfa Romeo Giulietta TCR, but not ours.

Q: What is the race format?

A: All of our events will be comprised of sprint races.  So, no pit stops, tire changes, or refueling needed.  Drop the green flag, drive with your hair on fire for 40 minutes, and see who comes past the checkered flag first.  The car is also suited for endurance racing, but we’ll cross that bridge later.  For now, we are sticking with the format that is most familiar to us.

Q: The car comes from Italy, right?  Is it here yet?

A: Nope.  Working on that.  But it is built and waiting for an airplane ticket as we type.

Q: So, are you are done racing with Risi Competizione?

A: Heck, no.  After being completely spoiled by the team at Risi Competizione for the past two seasons, here we go again.  While they have certainly carved out their niche racing Ferraris around the globe with unprecedented success, they are on board to see what we can do together with this “other” Italian racecar.

Q: What is Hella Pagid, and why are they on your doors and hood?

A: So glad you noticed that!  For the first time in the history of scR motorsports, we have a Corporate Partner (other than my wife, that is).  I am thrilled to announce that Hella Pagid Brake Systems is partnering with scR motorsports for the entire 2019 TCR season.  Known as a world-wide supplier of road-going brake system products for global vehicle manufacturers, brake pads and rotors from their motorsports counterpart, Pagid Racing, will be found exclusively onboard our Giulietta.  We look forward to having them at the track and sharing in our success this coming season.

That almost sounded like a proper “Press Release,” didn’t it? 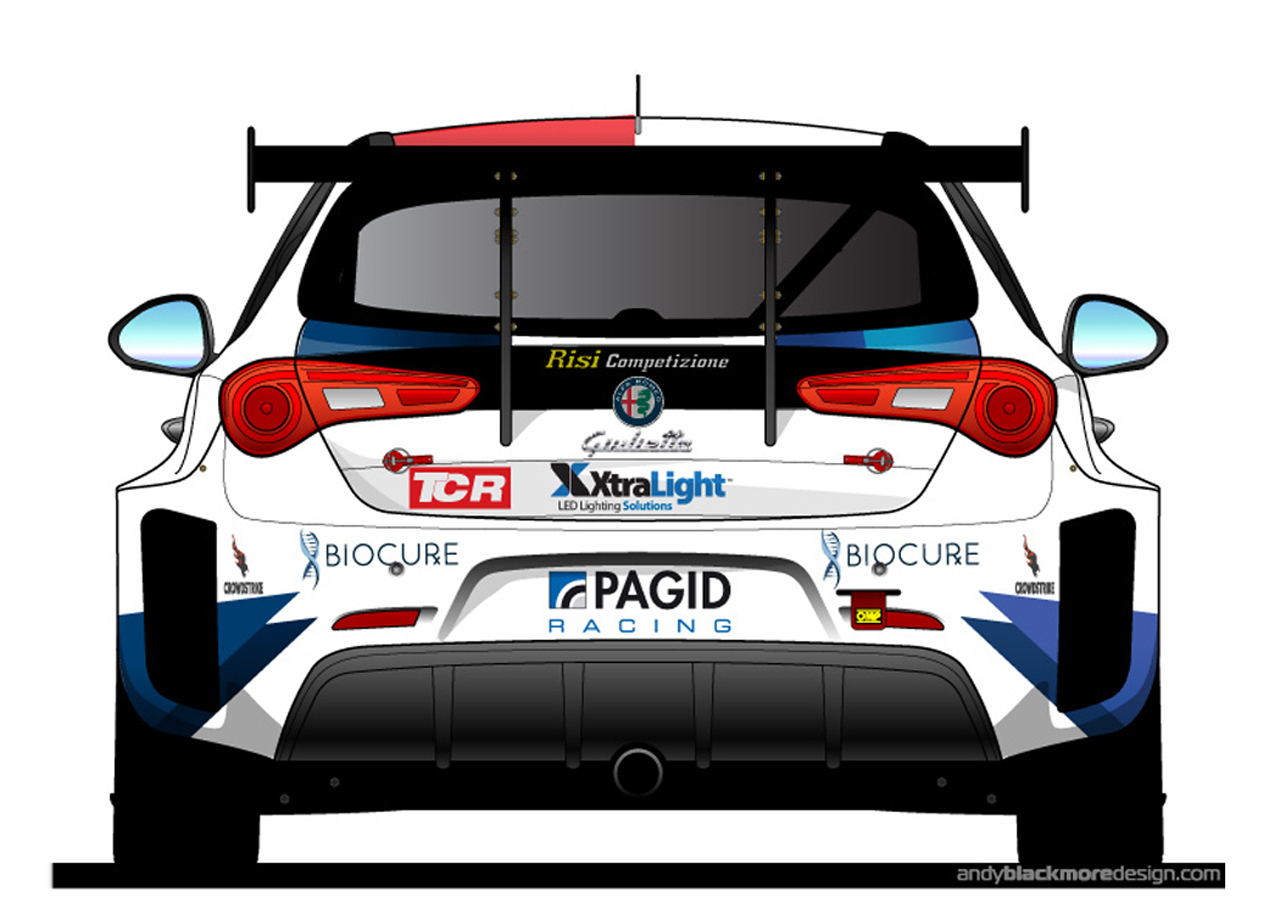 Anyone see a little bit of Saturn from this angle?  Didn’t think so.

Q: Has anyone yet thought about a Hella Pagid / Hello Kitty cross-branding exercise?  Hella Kitty perhaps?

Q: Is there a schedule available yet?

A: Absolutely.  While there is always the opportunity for updates from SRO, the TCR schedule as we know it today is as follows: 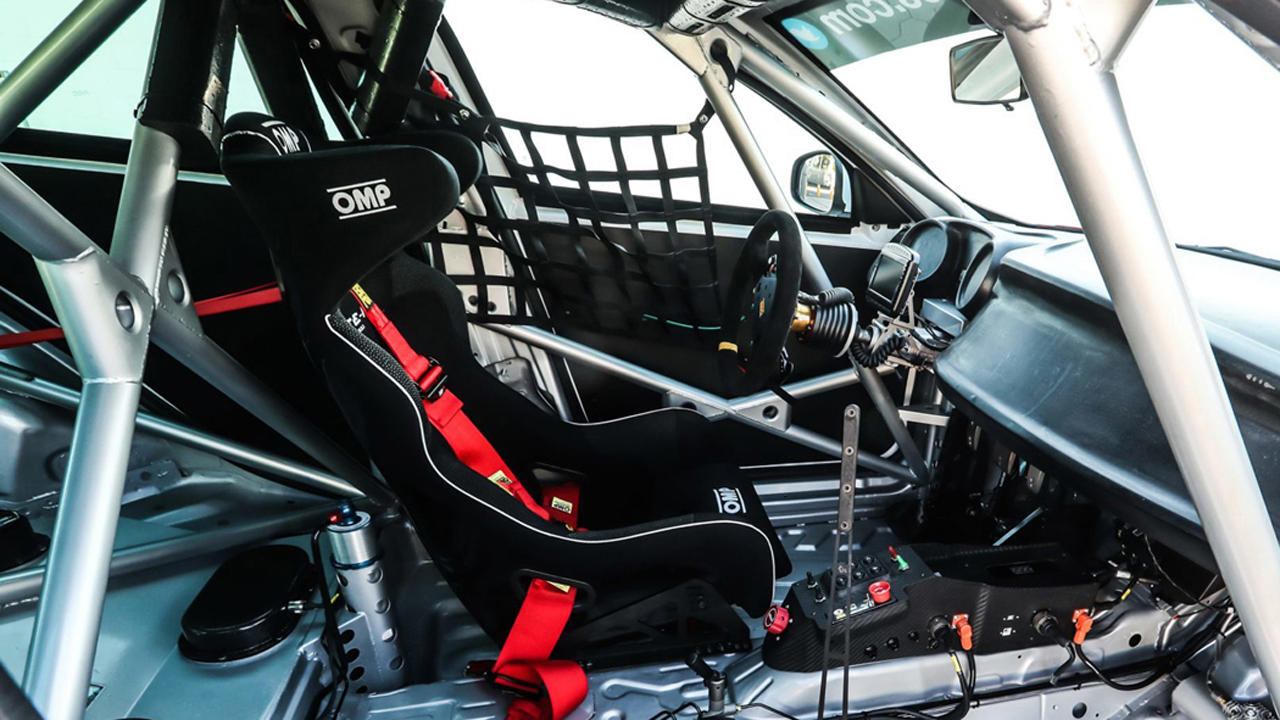 All business inside.  And our first racecar with an adjustable brake balance bar.

Q: I really liked the Texas flag on the roof of the Ferrari.  Do you plan to do that again? 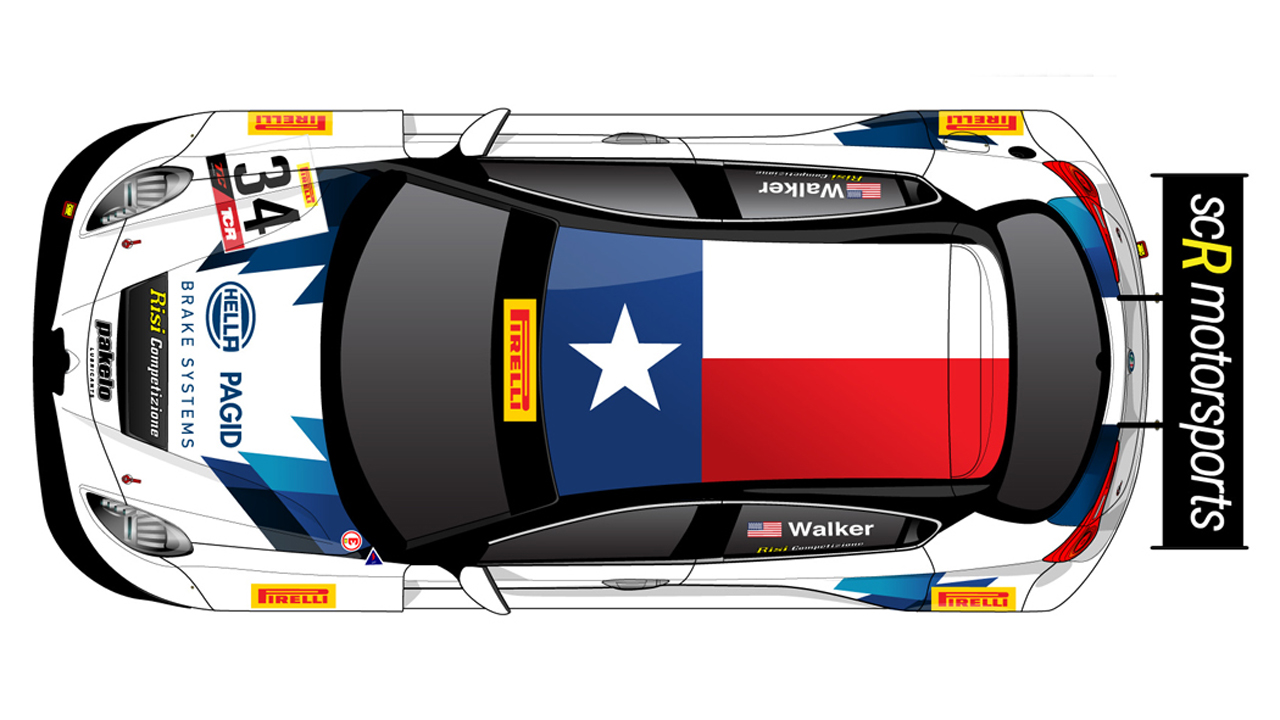 Q: I just realized that your first race is only three weeks away.  Will the car be delivered in time?

A: Well, it certainly would be inconvenient if it didn’t show up before March 2.  As long as another government shutdown doesn’t impact the customs process, I am told we will be fine.  Which means I probably should be worrying more than I am already.

Q: What am I forgetting to ask?

A: You forgot to ask how to buy tickets to the first race.

Q: Oh, that’s right.  Thanks.  How do I buy tickets for the first race?

A: The large turnout we had at COTA last year was simply amazing, and we really hope that you find the time to share in the fun this time around as well.  Racing in front of the home crowd is always a very special affair!  Link to tickets here, or you can go to the COTA website yourself to buy them online.  And the race weekend timetable can be found at this link. 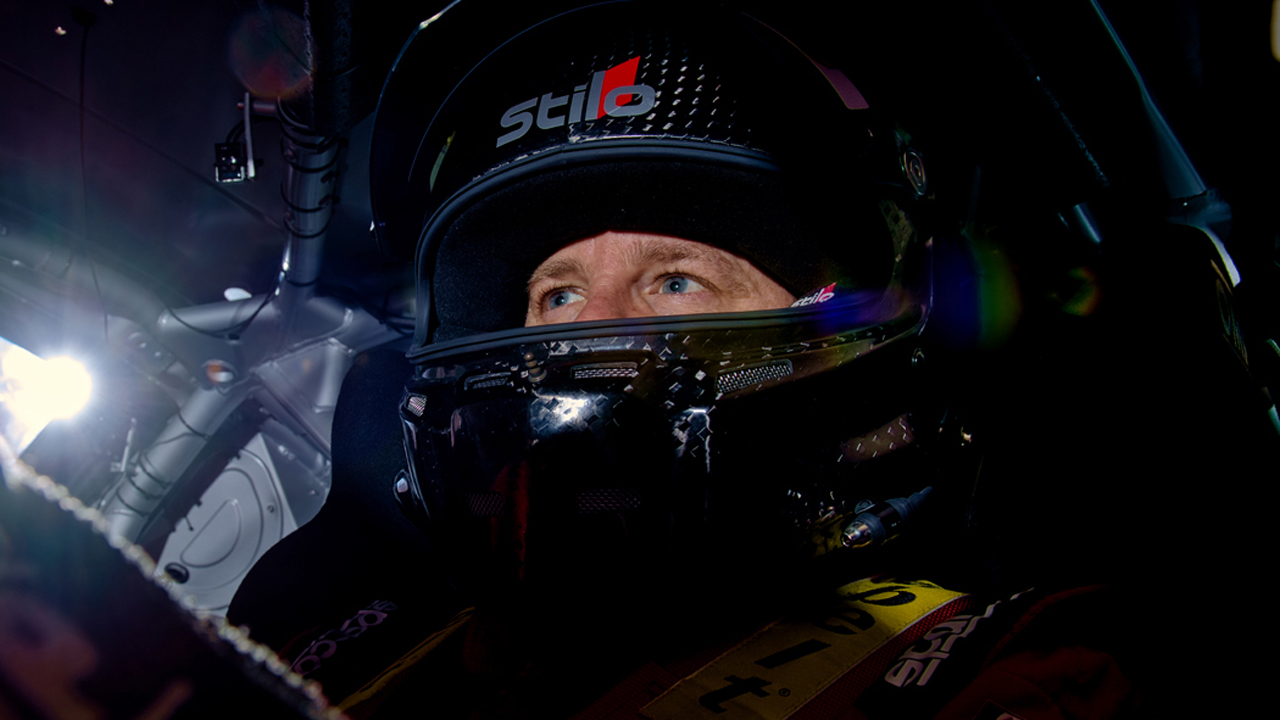 So, here’s to a great 2019.  Things are changing, but things are staying the same.  Hope to see you at the track, and stay tuned for a proper “Press Release” in the days that follow.  I’m sure that someone is going to make me do that…