I have now checked every box on my bucket list.  The rest of my life will only be a disappointment.  I have been spoiled beyond the point of repair, and will forever be hoping to have just one more lap in that incredible car at that incredible track.  I am at a complete loss to put together the proper string of adjectives necessary to convey just what a physical and emotional rollercoaster this was.

Driving someone else’s bazillion-dollar vintage Can-Am car at a race track never before experienced is a sure-fire recipe for something worthy of going viral on YouTube.  Strap a 600+ horsepower motor into a 1500-pound chassis and nothing good can really ever come out of it.  Fun, yes, but not necessarily good.  I am at a complete loss to put together the proper string of adjectives necessary to convey just what a physical and emotional rollercoaster this was.

How It All Started

I really can’t write about this weekend without vacillating back and forth between what an incredibly awesome, yet magnificently frustrating weekend it was.  For those of you that do not know the details, I spent last weekend driving a vintage 1968 McLaren M6B at the Legends of Motorsports Something-Or-Other race at Laguna Seca (for my mom’s benefit, that’s a really, really, really famous racetrack in Monterey, California).  The weekend was celebrating the 50th anniversary of McLaren (again, for my mom’s benefit, those are really, really, really fast old race cars) and about twelve of them or so came out of the garage to play.  All I knew was that I was completely in awe of the history, quality, sounds, and smells of everything in the paddock.  Except for that semi-decrepit Oldsmobile Trans-Am car across the way from us, but that’s another story.

The car I was driving was lovingly restored to its vintage racing glory by a long-time friend by the name of Bob Lee.  He has owned the car for the better part of a decade at this point, and it is perfect.  Not just perfect as we casually use the word perfect in daily conversation, but perfect as in the car doesn’t roll out of the garage unless the relative humidity is in an acceptable range.  And the driveway was swept beforehand.  This car is beyond words, so I’ll just let you ogle the attached pictures since there is no way I can express to you what this piece of 45-year-old machinery does for me.  When I got the call with the offer to actually DRIVE it on a RACE TRACK, I was floored.  Bob is a particular sort of guy, and the pressure I placed on myself to not scratch his baby dwarfed any pressure he placed on me by a factor of about, well, a really big factor.  Which made it suck that much more when I did scratch it.  Three times. 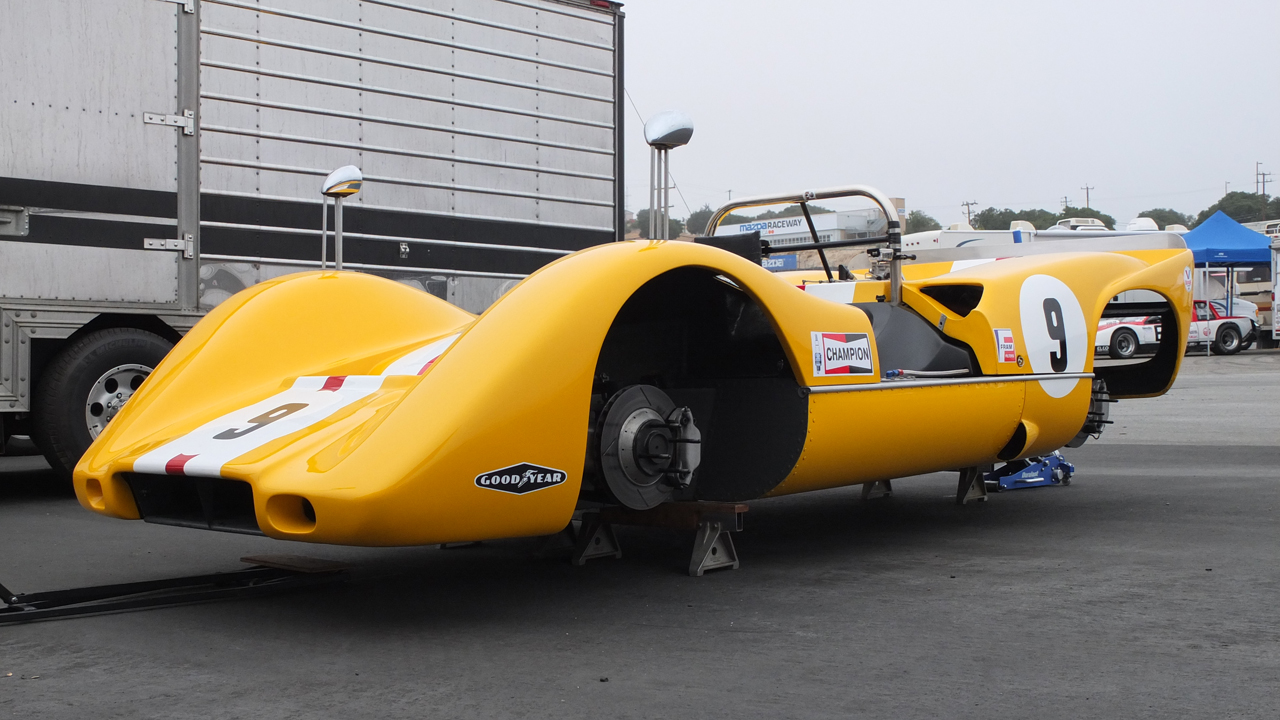 While Bob may be completely in love with his car, mere fascination doesn’t get you to the grid on time.  The secret to a long-term, successful mechanical relationship is thoughtfully-applied maintenance, care, and feeding.  To this end, Ilja Burkoff acted as the car’s Godfather all weekend.  I can honestly say that I have never worked alongside someone with greater pride and knowledge of the car in his stewardship.  Bob may be the owner, but Ilja is the caretaker.  Without exception, we were always prepared and ready to go with military-like precision when the car was called to race.  Which made it suck that much more when I did scratch it.  Three times.

Friday night we attended a cozy little dinner for about ten McLaren owners.  I showed up thinking “free food” for the most part, and was only completely blown away when Bruce McLaren’s sister Jan walked up and shook my hand.  That was followed by an impromptu chat with the third employee of McLaren Motorcars, and yet another brief discussion with one of the trackside McLaren techs from the era.  Not once did I mention that I am currently the co-driver of a $500 Saturn.

I’ll keep the on-track exploits to a minimum, as frankly this weekend wasn’t about racing or finishing well.  It was about experiencing, if only for a brief sliver of time, what it might have been like to have been a part of the Can-Am scene in 1968.  And that I accomplished without question.

Saturday morning was a brief practice session.  Old car, new track, rookie driver, meticulous owner, patient crew chief.  Six laps later the car rolled back off the track under its own power with me completely unsure of how I was ever going to get the hang of this thing.  As a purely relative measure, the 1:33 lap times were horribly conservative, but not too far off the car’s typical pace.  With the exception of a shifter that simply refused to let me downshift without making a complete fool out of myself, all was good.  Sorry about the overrevs, Bob, but I’m going to blame the car on that one 🙂 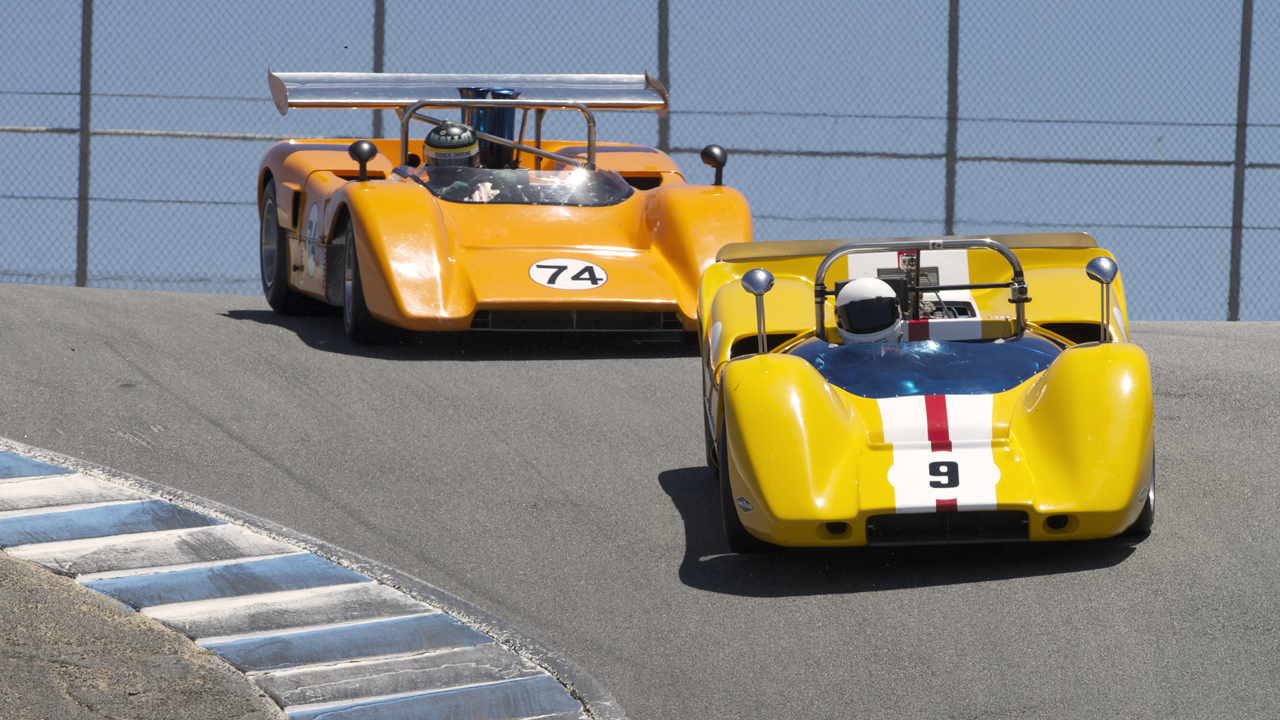 Practice times were used to set the grid for a qualifying race on Saturday afternoon.  So, my seventh lap at Laguna Seca was a freakin’ Can-Am race start.  Time to strap on a set and see how it turns out!  I was somehow gridded back around 5th in the field of about 12.  My plan was to tuck in behind another M6B just to get a rhythm going, but between a great start and a bit of mild aggression I somehow ended up IN FRONT with about three laps to go.  That’s in front of several later-model McLarens sporting 800 to 900 horsepower each.  It would not last long, however, as a black flag intended for the car behind me was inadvertently directed to my attention, forcing me to come in two laps early.  While the race stewards apologized for the miscue, my finishing position fell to the bottom of the grid sheet for that afternoon’s heat race.

In the heat race, I frankly forget what happened.  I went, I drove, and finished somewhere around 4th.  Lap times were in the 1:31 range and for the first time I was getting mildly comfortable with the car.  Mildly.

Sunday morning’s activity was a brief practice session.  We stiffened up the rear anti-sway bar and bled the brakes, so I was encouraged to lean on the car just a little bit more.  After about 20 minutes of what I thought were quality track miles, I brought the car in only to find that at some point I had clipped an orange pylon going into Turn 1.  Now, in any other car, brushing up against a cone is a non-event, but if you’re in a fiberglass-bodied vintage McLaren at 140 miles per hour it sort of shatters the left rear bodywork.  And marks up the tub.  And scratches the nosepiece.  And makes Bob’s forehead wrinkle up.  And makes James feel like shit.  Can’t blame the car for this one. 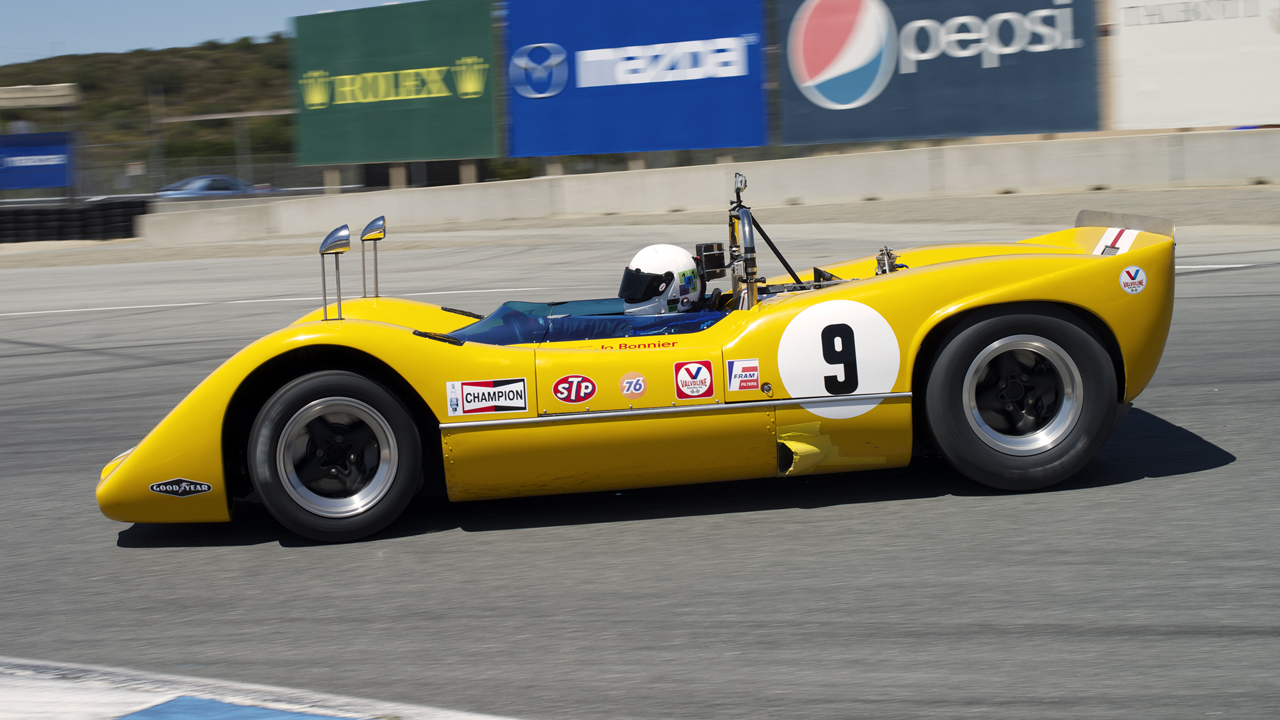 A little creative duct tape resolved the bodywork issue, but it was in my head.  Probably a little bit too much.

For the feature race on Sunday, I was gridded in 4th behind two big-block McLarens and a 2002 Dallara-chassis IRL car.  How many people can say they have experienced THAT?  This time I got a GREAT start (see ya, Dallara) and was in 3rd place by Turn 2.  Battling for 2nd place in Turn 4, the car went wide (that’s a fancy way of saying I screwed up and went into the turn too fast) and put 3.5 tires off in the dirt.  Thank God I left 0.5 tires on the track.  Watching the video, I made a complete hero re-entry and saved it – full opposite-lock steering in fourth gear without a lift – but was smacking myself around for being so careless with Bob’s toy. 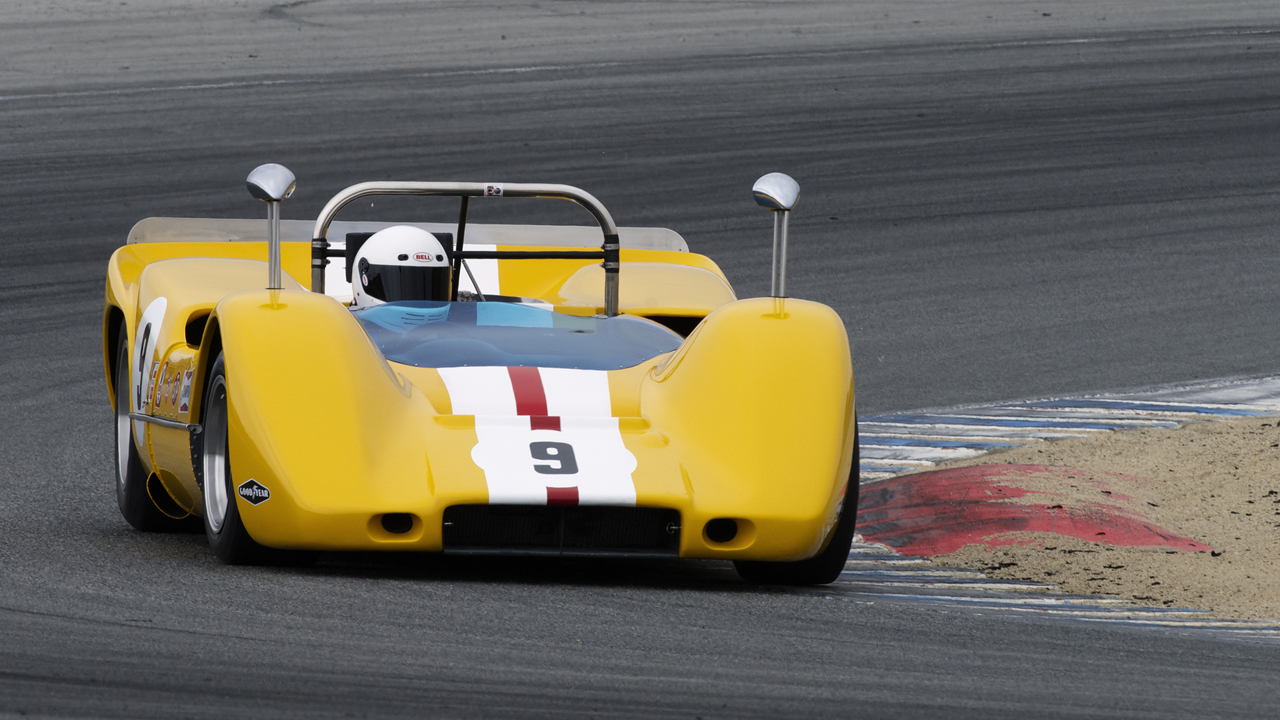 Within two laps I caught back up to the big-block in 2nd place and literally smelled his exhaust for the next six laps or so.  My lap times were better, still in the 1:31’s, but his power advantage on the straights was insurmountable given my non-willingness to try anything else that might result in an off-track adventure.  The fun and games lasted until, with two laps to go, I was given a black flag for the rear diffuser panel that had been compromised (ok, ripped off and hanging by a thread) during my foray into the dirt on the first lap.  And there ended my time playing vintage racecar driver for the weekend.

So between the overrevs, the fiberglass bodywork, and the rear diffuser (which included a damaged transmission cooler, so just add it to the bill, Bob), I managed to mildly defile this rolling piece of automotive history.  Which, I guess, is the point.  Sitting in a museum would certainly be an easier life for it, but in the end it’s a tool designed for a purpose and I can say that I did my best to do it justice.  Which I didn’t, but that’s beside the point.  If it were easy, anybody could do it. 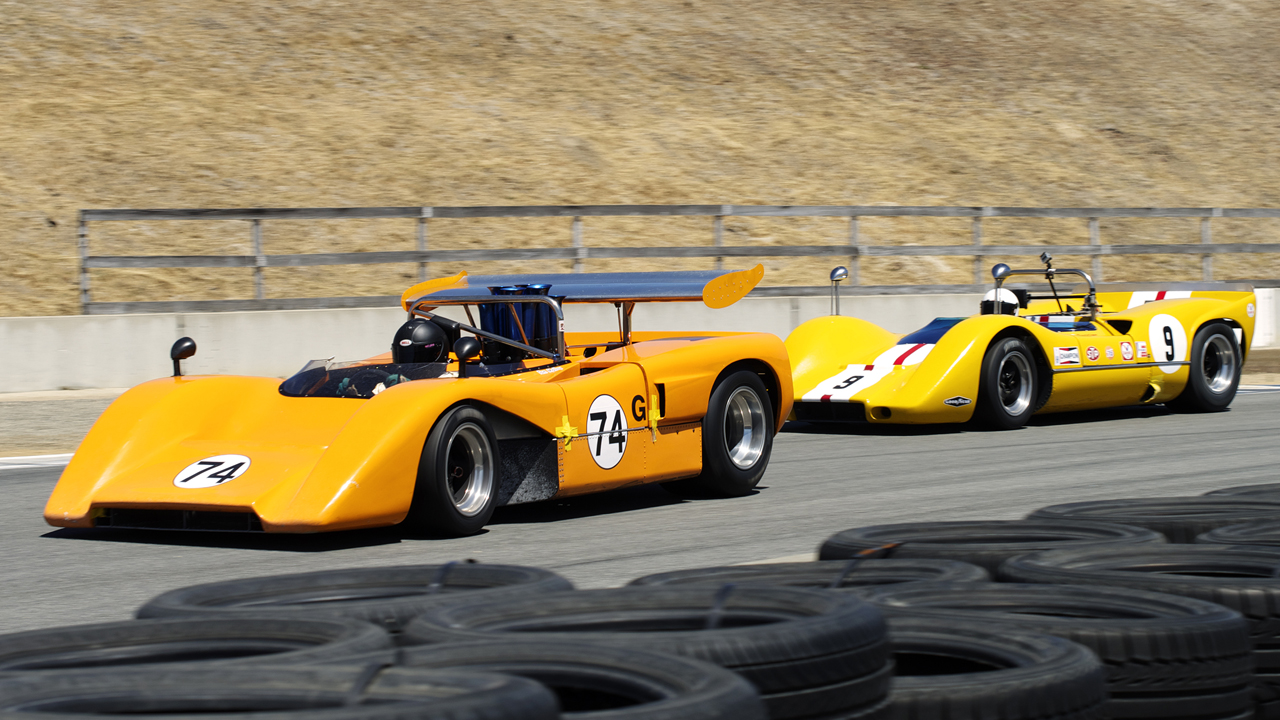 Cars can (and usually will) be fixed and egos can (and sometimes will) be healed.  Time will take the edge off of the semi-bitter moments that seemed to polka-dot the mega-awesomeness of the experience.  Maybe in a little *more* time I will be able to realize that I had an experience that was so rare, so visceral, and so pointless to 99.99% of the population that I should simply embrace the fact that I survived without bodily injury with stories to tell for years to come.  In the end, that’s what racing is really good for, as nobody really cares that you finished every race without putting a wheel wrong.  Plus, when I finally DO figure this car out, the trials and tribulations of this past weekend will only amplify the accomplishment.  Or so I hope…