My, How Time Flies When You’re Not Writing Newsletters!

Last time you heard from us, Caherty had just hit the wall in NASCAR Turn 3 at MIS.  That was back in…August.  Yikes! A lot has transpired since then – Christmas, a Presidential Election, an estimated 1.8 million births worldwide, and yes, another ChumpCar race.  Due to factors including, but not limited to, intentional procrastination, here is your better-late-than-never race report from Texas World Speedway.  I just hope I remember all the important bits.

With the Art Car back from its recent surgery and rehab, it only made sense to tow it and the Gold Car 1300 miles to Texas to make sure that it was put back together properly.  After all, shaking it down in Michigan only made too much sense!  With that decision behind us, Mark, Matt, and PC loaded up the tow rigs and trained the GPS on Houston, Texas.  Twenty-four hours and approximately $1,540 in fuel later, both arrived unscathed for a pre-race gathering at the Walker house on Thursday night.  Tom, Patrick, Nic, and a handful of local racer-types all arrived as planes and work schedules allowed, with the lights finally going out somewhere around 3:00 in the morning.  We won’t name names, but it was noted that some of the local PCA guys showed up wearing their Piloti driving shoes.  To a cookout.  Guys, that doesn’t help the Porsche-owner stereotyping at all!  At least you left your gold necklaces at home… 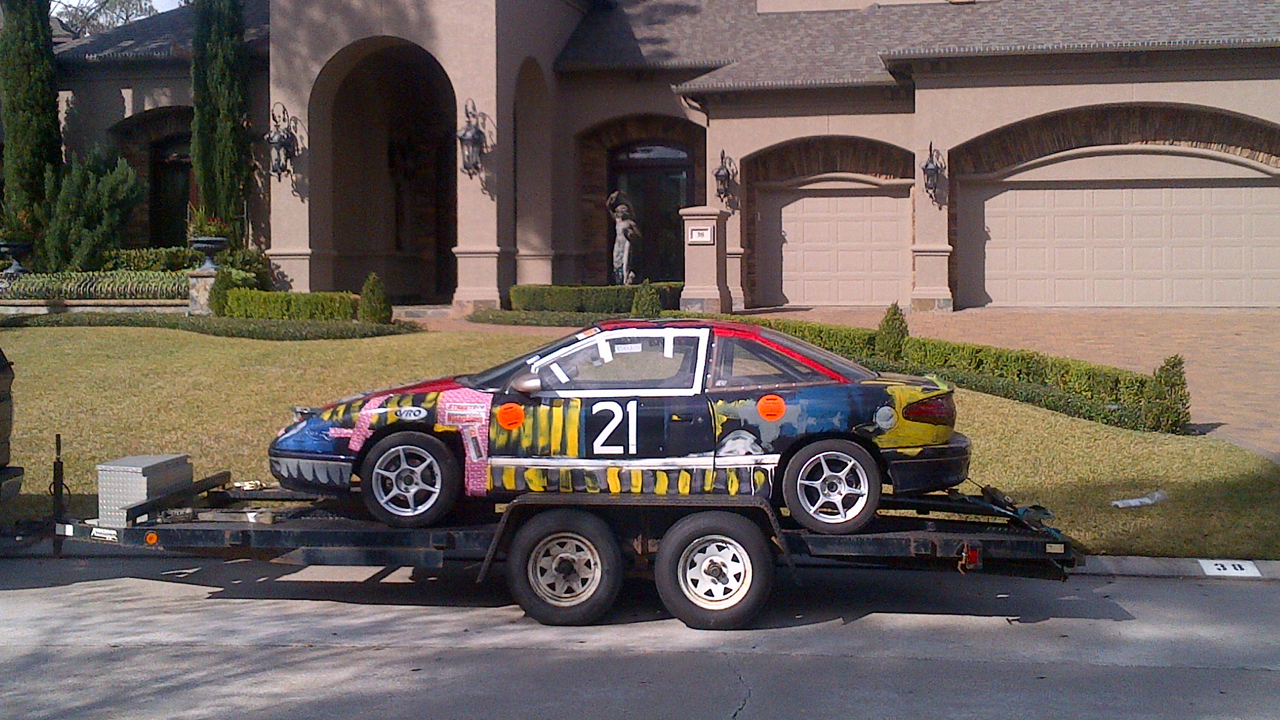 Friday morning arrived far too early, as you would expect.  The day began with James ceremoniously handing Tom the keys to the M3, his first big-boy car.  The transaction significantly increased Tom’s out-of-pocket expenses for the weekend, but so far we have not heard a single complaint from Milwaukee.  That distraction behind us, we loaded up our gear, hit Chick-fil-a for lunch, and headed to TWS.

Thanks to Mark, PC, and Rob replacing every known right-front suspension component on the Art Car with F1-type attention to detail, both cars shook down perfectly on Friday.  And we mean perfectly.  With nothing more than an alignment tweak and changing out the coolant for water, both cars lay in wait Friday night for Saturday’s racing excitement.  Throughout the day our last two arrivals – Larry and Tomas – made it and were able to join us for dinner at some place in College Station that is way too proud of the A&M Aggies.  But that’s redundant.  Nic’s parents also joined us for the first time, and while they appeared to be mildly alarmed at the fact that their son was hanging out with a bunch of guys who thought racing Saturns was cool, they smiled politely and nodded their heads as we regaled them with fanciful stories of Saturn racing glory.  Most of it embellished, of course. 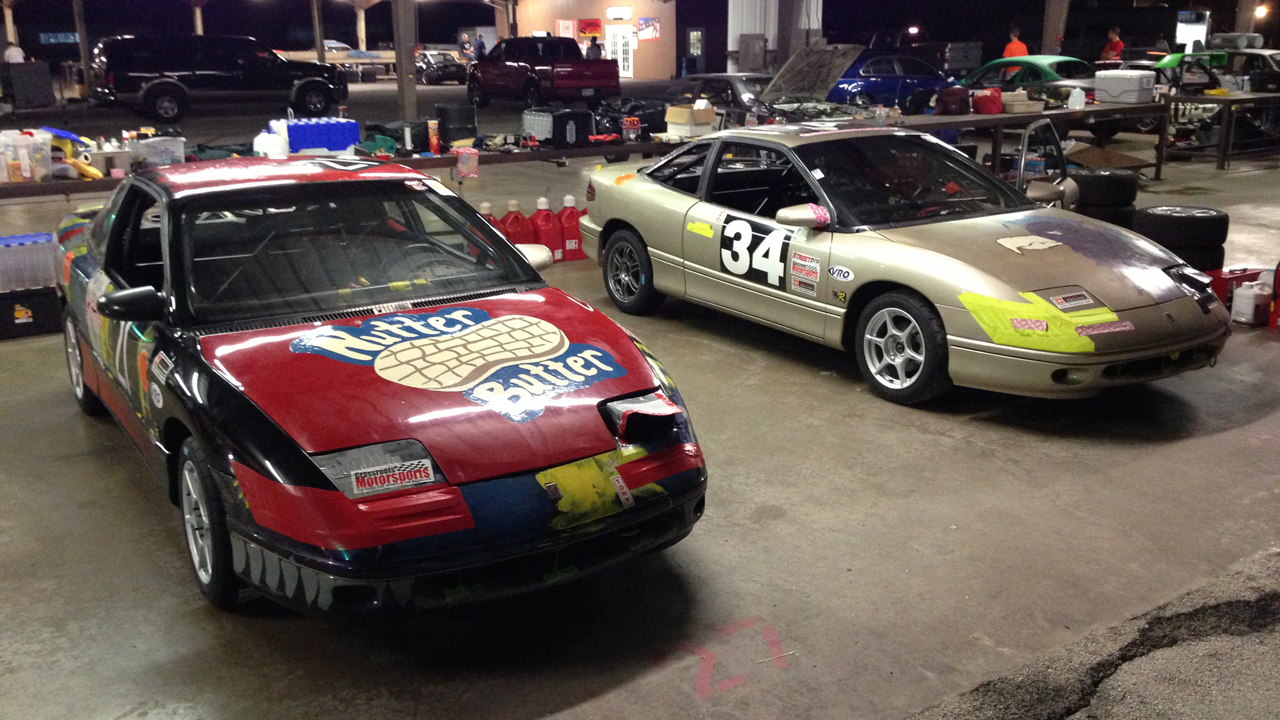 We also learned way too much from Tomas that evening about the care and feeding of…windmills.  Not like Don Quixote-esque wooden windmills but those huge industrial units seen dotting the countryside in packs of ten or more.  Did you know that an oil change on an industrial windmill requires something like eighty 55-gallon drums of oil?  And that oil has to be lifted five gallons at a time to the top of the tower for replacement?  Seriously cool stuff that has nothing at all to do with ChumpCar racing, but now you know.  We also learned that Tomas and his family were in the process of moving from Houston to Florida.  That weekend.  And we thought that changing the oil on a windmill required deft planning and coordination!  We are still not quite sure how he pulled that one off on the home front without a great attorney, but rumor has it that jewelry was involved as a partial bribe.  Something was muttered about “…women…” being “…so predictable…” but in retrospect the same can be said for us, can’t it?  Boys will be boys!

Spoiler alert: for the first time in recent memory we neither 1) ran out of gas or 2) hit the wall in NASCAR Turn 3!  The green flag flew, the weather was ideal, and the Saturns took off in perfect formation.  Both cars started marching their way up the leader board without on-track drama other than that caused by the occasional rolling Volvo (who would have thought that something so boxy could actually roll around?) or an obnoxious AMX yard-art-quality rolling chicane.  PC took care of fueling duties and managed a streak of perfect pit stops that never failed to beat the ChumpCar-mandated 5-minute minimum.  Everything was going sweet until…

Blame the new guy!  Midway into his stint, Tomas began to comment on erratic power steering feel in the Gold Car.  Of course, Tomas is accustomed to racing Porsches and BMWs, so we pretty much told him it was “normal” and get back to your driving, please.  Not one to let it slow him down he pressed on obediently until the precise moment when the power steering pulley decided to explore the concept of “unbridled entropy” and simply ceased to exist.

(Note: For the non-engineers in the reading audience, entropy is defined as, “The tendency for all matter and energy in the universe to evolve toward a state of inert uniformity.”  In other words, things that are currently being simply cease being.  Quickly.  This is precisely what the pulley did.)

Since the alternator, the water pump, and the Saturn time-space continuum are all driven by the same serpentine belt obliterated by the now-non-existent power steering pulley, Tomas dutifully headed toward the garage to await diagnosis.  While the team had a spare pulley, it was quickly discovered that the spare part had a nice chip in the outer diameter, rendering it unfit for race duty.  A 30-minute trip into town secured a brand-new unchipped pulley from the local auto parts store which was subsequently dropped…and chipped.  With two chipped pulleys and the clock continuing to tick away, both parts were suddenly approved for race duty!  The best of the two was installed and the Gold Car was sent back out on track well behind the leaders, chipped pulley and all, driving for pride more than finishing position.

The Art Car soldiered on without issue, ultimately landing a third-place finish after seven hours of competition.  Another podium, and a great testament to Mark and PC’s repair efforts!  The Gold Car ended up much farther back, but held together in spite of the fact that there were a few extra fasteners found on the workbench following the power steering pulley swap.  Don’t tell Mark about that.

Following a decidedly average experience at Outback Steakhouse on Saturday night, the team was locked and loaded for Sunday’s race.  The green flag fell, the cars roared to life, and the pair of Saturns began to circle TWS at breakneck speed.  Mark and Larry took the helm first, running nose-to-tail for a good part of the session, turning in lap times that varied by only tenths of a second.  Settling into a nice series of 2:07’s and 2:08’s, both ran hard, ran clean, and moved the pair of $500 specials into the top ten.

PC worked his fueling magic, consistently topping off the tanks in three minutes flat.  Other than Tom doing battle with a woodie for ten laps (how can you read that without chuckling out loud?) and Nic being told by his father over the radio to “Sack up, boy!” as his lap times faltered, the afternoon was as uneventful as the Saturns were consistent, both continuing their march through the field. 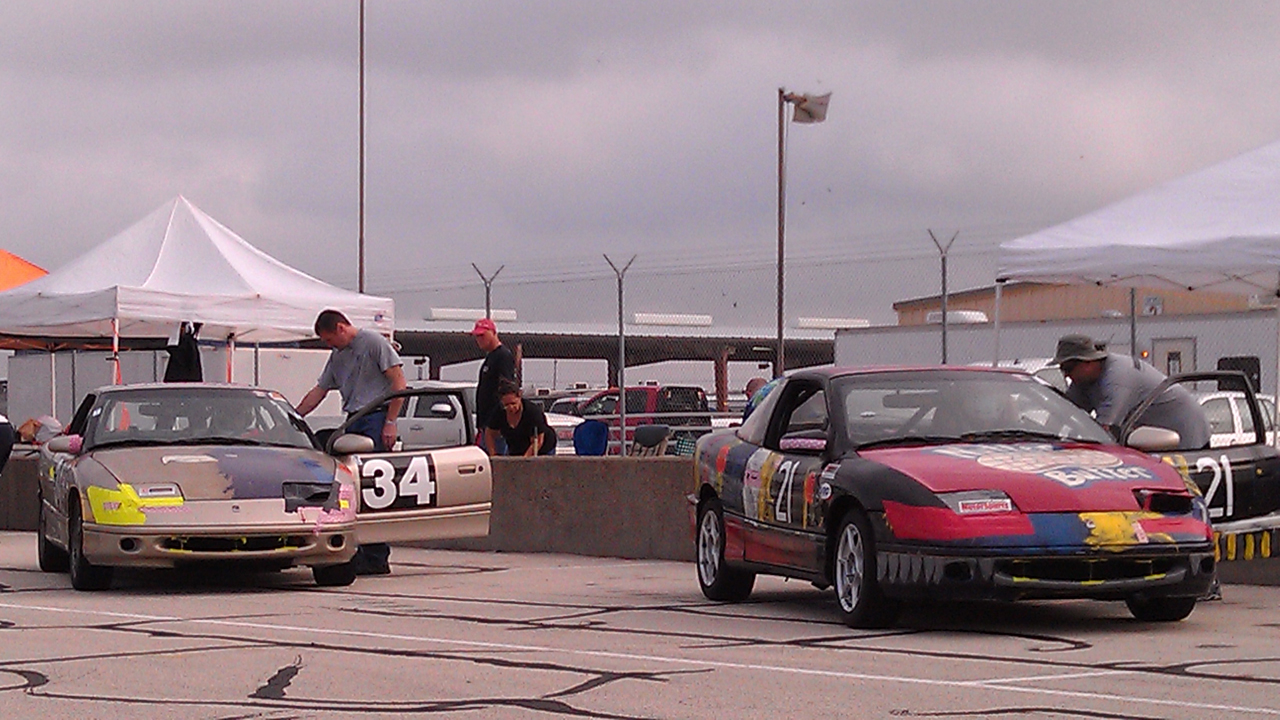 With approximately 3.5 hours to go, some form of non-Saturn on-track carnage forced the field to run pace laps under a yellow flag for a prolonged duration, forcing the team to re-evaluate the fueling and driver swap strategy.  In the end, and without going into the nobody-cares-about-it-anyway detail, the Art Car stayed out to take advantage of track position while the Gold Car came in for an early driver change.  Naturally, the yellow flag cleared minutes later, forcing the two cars into two very different strategies.  The Gold Car was out in front but would have to conserve fuel at the end while the Art Car was further back but had more than enough fuel to go the distance.

With the stage set for a dramatic finale, the race was on.  With one hour to go, Matt was driving the Gold Car as delicately as he could to make the fuel last while James in the Art Car was instructed to drive in what was later described as “full monkey-adrenaline pursuit mode.”  Lap times fell into the 2:06’s for the Art Car, and two passes were made for position on track in the final hour.  With fifteen minutes to go, James caught up to Matt (still running his fuel-sipping 2:15’s), and essentially played wingman for the final few tours around the track.  Literally door-to-door at the checkered flag, the on-track finishing positions of third (Gold Car) and fifth (Art Car) were bumped up to second and fourth when the second-place finishing Miata was DQ’ed for only having three drivers behind the wheel.  Thus continued the Saturn’s dominance as the highest-placing *non-Miata* in Texas.  Yes, the fastest losers.

What Did I Forget?

Other sounds bytes as provided by those around the action during the weekend:

– Not only have Saturns been spotted bump drafting each other, but now our competition is looking for a piece of the action.  Not once but twice the Saturns were engaged in a Miata tag-team nose-to-tail exercise.  Perhaps we should start offering lessons?

– Apparently Tomas and Tom, both having to leave the race early on Sunday due to travel arrangements, watched the last 90 minutes of the race via the Race Monitor app on their smart phones, cheering and hollering all the way back to the airport.

– Nic managed to go an entire race weekend without ripping off the gear shift knob.  Perhaps that’s because he has “cut back” to a 3,550-calorie-per-day diet?

– Rumor is that Tomas’ marriage survived the weekend intact, but just barely.  We hope he gets to race with us again, as his cool Euro-sounding name adds some serious racing cred to our ChumpCar effort.  We might also change Patrick’s last name to Vettel.

– Our fueling routine has become so efficient that we actually had time to change the right-front tire before James’ final stint on Sunday.  It was almost like NASCAR! Ok, so it wasn’t almost like NASCAR, but it was pure awesomeness nonetheless.

– The most treacherous driving all weekend occurred in the Prius with the illegally-tinted front windshield.  At night.  In the rain.  At 80 mph.  Visibility could not have been more than 50 feet.

– For some odd reason, Matt thought it would be cool to die cast Hello Kitty shift knobs out of aluminum.  So he did.  In his garage.  At home.  Is it only engineers that do this sort of thing for fun? 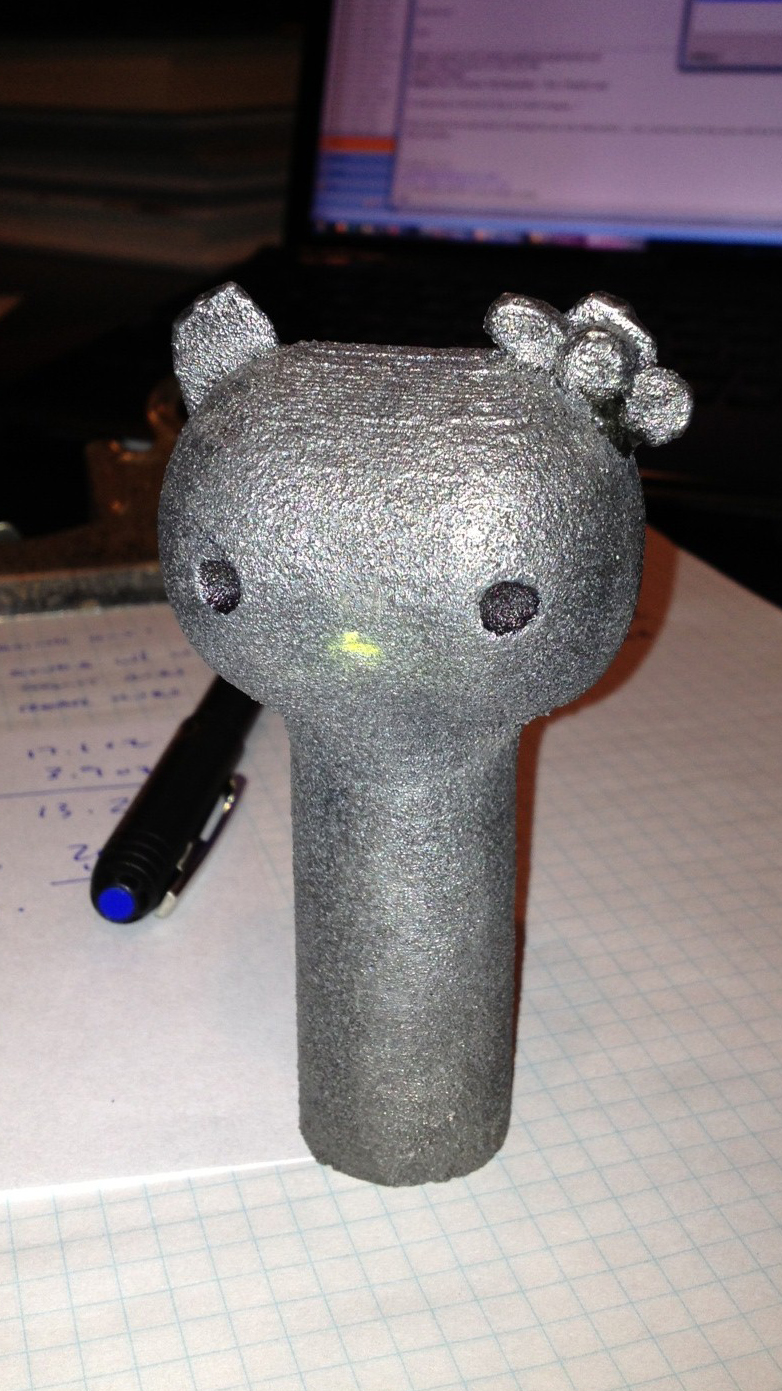 Rumor has it that Mark will be building an additional three cars for the 2013 ChumpCar season, so applications are being taken now to join the team.  Please submit your full driving resume, eight personal references, and the required $25,000 non-refundable application fee to Mark directly.  He should get back to you before Cindy kicks him out of the house.

(See, Cindy, it really COULD be worse!)

Watkins Glen is on the schedule for April, and already the plans are being formulated to make the cars faster, lighter, and more reliable.  It’s amazing how much energy can be consumed in racing a pair of $500 Saturns.  See you at the track!