James Walker, John Comeskey, and a small team of scR crew members opened up the Central Division road racing season with a double regional at Indianapolis Raceway Park (IRP) during the April 19-20 weekend. James’ famous red #34 racecar was not quite ready to race after the off-season engine rebuild, so James and John agreed to share the white #55 car – John driving on Saturday and James taking over on Sunday. Sufficient competition would be guaranteed by Chris Berube, the SPC crew, and their blue #50 car.

John and James were unable to attend the Friday practice. But the Saturday morning qualifying session was scheduled to be 40 minutes long, so John decided to start off slowly and work into a groove while his brain became reacquainted with the IRP road course. In retrospect, this was probably a rookie mistake – since one never knows what might prevent one from completing the session.

After about 15 minutes or so, John was just starting to pick up the pace when one of the RX7s in the group had a serious incident while passing under the grandstands to enter the front straight, hitting one of the cement barriers so hard that he knocked it over! The driver ended up being perfectly OK (even though the car was trashed.) But the race officials decided that such an impact was worthy of a trip to the medical center. So they black-flagged the session and the entire group spent 10 minutes or more on the pit lane while race officials removed the wreckage and replaced the barrier.

Luckily, they decided to give the field 5 more laps after the cleanup. So John was able to turn a couple of half-decent laps. He ended up qualifying 6th overall (out of a total field of 23) and 3rd in ITA (there were only 6 cars registered for ITA). And he was smack dab in the middle of fellow Dayton-area racers Chris Wikle and Travis Schwenke in their ITB VW Golfs.

The pole position went to a CRX from the Indy region. Next to him was Chris Berube. Then an IT7 RX7, a spec Miata, Chris Wikle, John, and Travis. The CRX chose the inside position, so that put John on the outside lane at the start. John got a great start as the green flag dropped and walked past the Miata on the outside. He just barely tucked back in to avoid plowing down the cones at the pit exit and took turn one in the 4th spot. 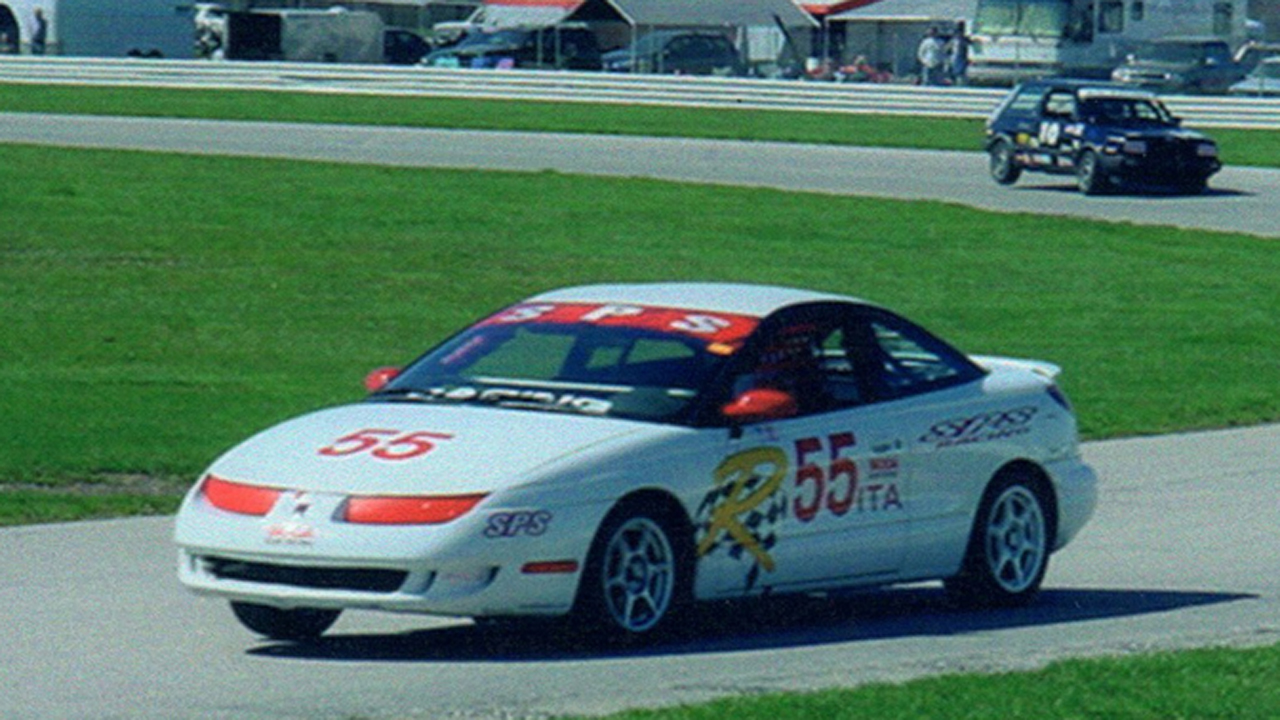 However, he promptly proceeded to blow turn 2, thus allowing both Chris and Travis to get past, relegating him back to the 6th spot. He got back past Travis later that lap. But it took several more laps before he could get past Chris Wikle. By the time he had passed Chris, he was starting to feel pretty comfortable and was knocking lots of time off his lap times. Pretty soon, he caught and passed the RX7. This put him 3rd in class and 3rd overall.

Meanwhile, the CRX on the pole had corded his Hoosiers in the left front and right rear. So he was hanging on for his life and seemingly moving backwards. Chris Berube had taken over the lead and left the CRX in 2nd. It was evident that John was getting closer to the CRX, and he tried like heck to catch him, setting the overall fastest lap of the race in the process on lap #15 (1:54.133). Had there been 17 or 18 laps in the race, John probably would have caught him. But alas, it was only a 16-lap race. Nevertheless, a third-place finish yielded John’s first ever trophy. And he was justifiably happy with his relative lap times.

On Sunday, John turned over the driving duties of the #55 Saturn to fellow scR team member James Walker.

The entire field got faster on Sunday. Unfortunately, James’ qualifying session was also cut short – this time thanks to a loose exhaust header connection that separated five laps into the session. Nevertheless, James qualified 3rd in ITA and 3rd overall with a 1:53.248. And John and Jen managed to repair the header (thanks to some borrowed fasteners from the SPC camp) in plenty of time for the afternoon race.

At the start of the race, the CRX checked out and ran away from everybody. But James and Chris Berube – both driving Saturn coupes – put on a great show while battling for second position. James managed to take over second place at the start, but Chris promptly passed James entering the carousel. James then passed Chris on the front straight. They then went nose-to-tail for the rest of the lap and did it all over again. In the end, Berube prevailed – thanks in part to his fastest race lap of 1:52.484 (compared to James’ best at 1:52.764). But team scR was happy to earn another 3rd place and bring the car home no worse for the wear (save for some corded Kumhos and some well-worn brake pads).

As always, be sure to catch the latest news, schedule changes, race recaps, and photo and video galleries at the new scR website located at www.teamscr.com. Only one month until the full team descends on Grattan for the official scR start to the 2003 season!