How Long Until the ARRC?

Overheard in the paddock this weekend at Mid-Ohio:

Observer: “Hey James, you sure have a lot of crew help!”
James: “Yea, we keep them entertained and well fed.”
Crew member: “You didn’t mention cold and damp…”

Following our victory at Mid-Ohio in early September, the scR crew, driver, and fans were caught up in a week-long celebration. As the phone calls, e-mail, and verbal ‘thumbs-up’ poured in for the whole team, the reality of having to prep the car for yet another Mid-Ohio outing began to sink in. While getting that first win in the bag was certainly a major hurdle cleared for the team, defending the title would be another thing altogether – the fast guys were on the entry list this time around. Reality check #1 – a victory doesn’t mean a thing the day after. 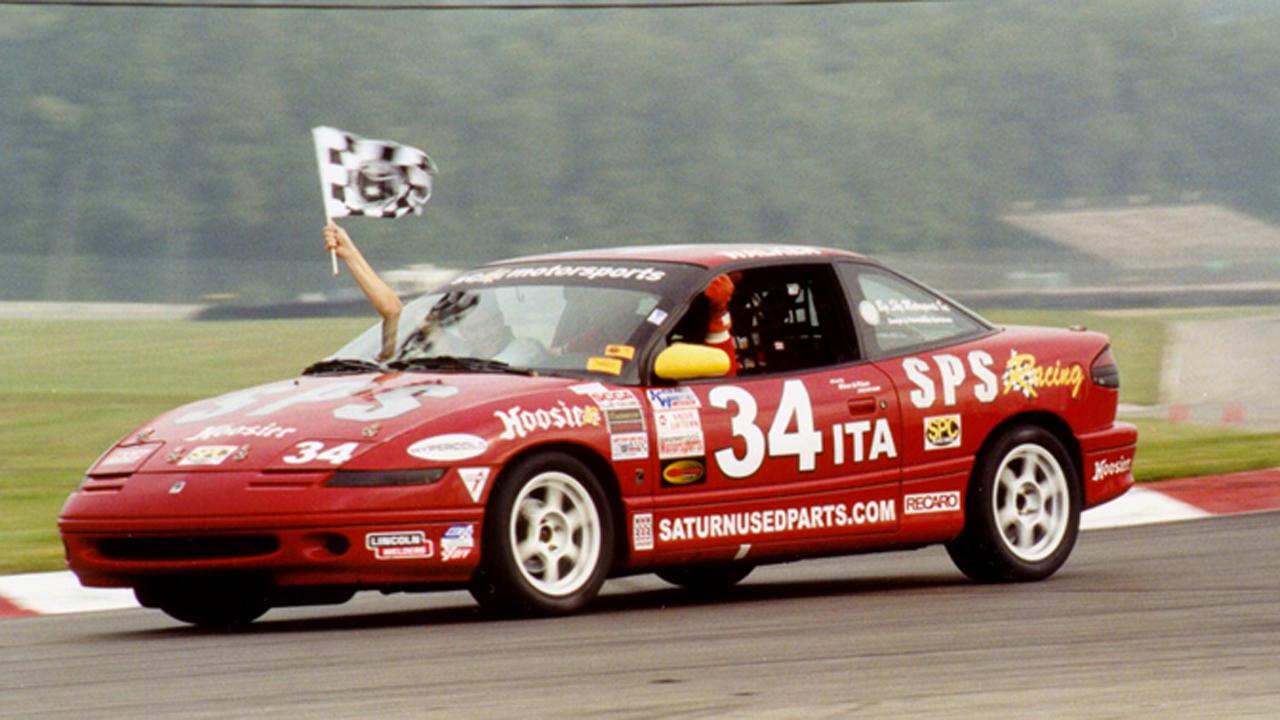 A quick scan of the entry list showed 22 ITA cars slated to take the green flag, and at the top of the list was the famous yellow #6 CRX (usually #63, but #6 this weekend) which reset the Road Atlanta track record at last year’s ARRC. At least we would get a good sense of where we were relative to the ‘fast’ Hondas. Strap on the race tires and let’s go!

Saturday Morning Qualifying – To Rain or Not to Rain

The Weather Channel said rain. The local forecast said rain. Looking up at the skies, Tom and Pat said “Rain.” Well, it didn’t rain…much. We headed to the grid with our full dry set-up, fingers crossed that the black clouds circling would hold off just 30 more minutes. All we would need was one good, clean, fast lap to beat the weather and secure our qualifying position.

Five laps of brake bedding followed by eight laps of full-tilt-boogie warmed up the driver, the car, and the stopwatch. The track was not particularly fast, as the non-racing line was still damp from showers that morning, but it didn’t matter – we gave it everything we had. The crew relayed in the slowly decreasing lap times until the checkered flag flew for the session. Our 1:47’s were not our fastest laps ever, but the clock confirmed that we were running lap times right on top of the #6, #33, and #11 CRX’s. The grid could not be posted soon enough.

Imagine the excitement in the scR paddock to learn that we had qualified on the outside pole in a fast-CRX laden field. For the second time this season, there was a Saturn on the front row at Mid-Ohio! With the rain pouring in from all directions (it started immediately after our session ended) the crew (cold and damp – see above) began to prep the car for its afternoon outing. Absolutely everything needed to be perfect to sustain this level.

Pat, Tom, Vaughan, and John went over the car once, then twice, then a third time before we finally rolled it to the grid. Fortunately, the rain had subsided and the winds had dried the racing line once again – it would be a dry qualifying race after all. Time to run with the big guys!

Lined up two-by-two through turns 13 and 14, the #6 car slowly decreased his speed, finding our weak spot…no killer final drive! We took the green flag in first gear (boo!), requiring an immediate shift to second, then third. The time lost shifting was not missed by the CRX as he handily pulled in front of us and entered turn 1. These guys know what they are doing.

Midway through turn 1 came the revelation of “holy %!*#@ – we’re catching back up!” Sure enough, we had more mid-corner speed than the Honda did and we ran back up on his bumper, nose-to-tail through the chicane and into turn 5. His final drive pulled him down the back straight, putting a five-car-length distance between us, but by the top of turn 7 we had again made up the difference. The Esses and Thunder Valley flew past and as we entered the front straight for the completion of lap 1 there was no more than a one-car-length gap between us. The #11 car had tucked in behind us, but not close enough to make a pass on the subsequent straight. Pat and Tom could be seen jumping up and down on pit row, knowing that we were finally in the race. 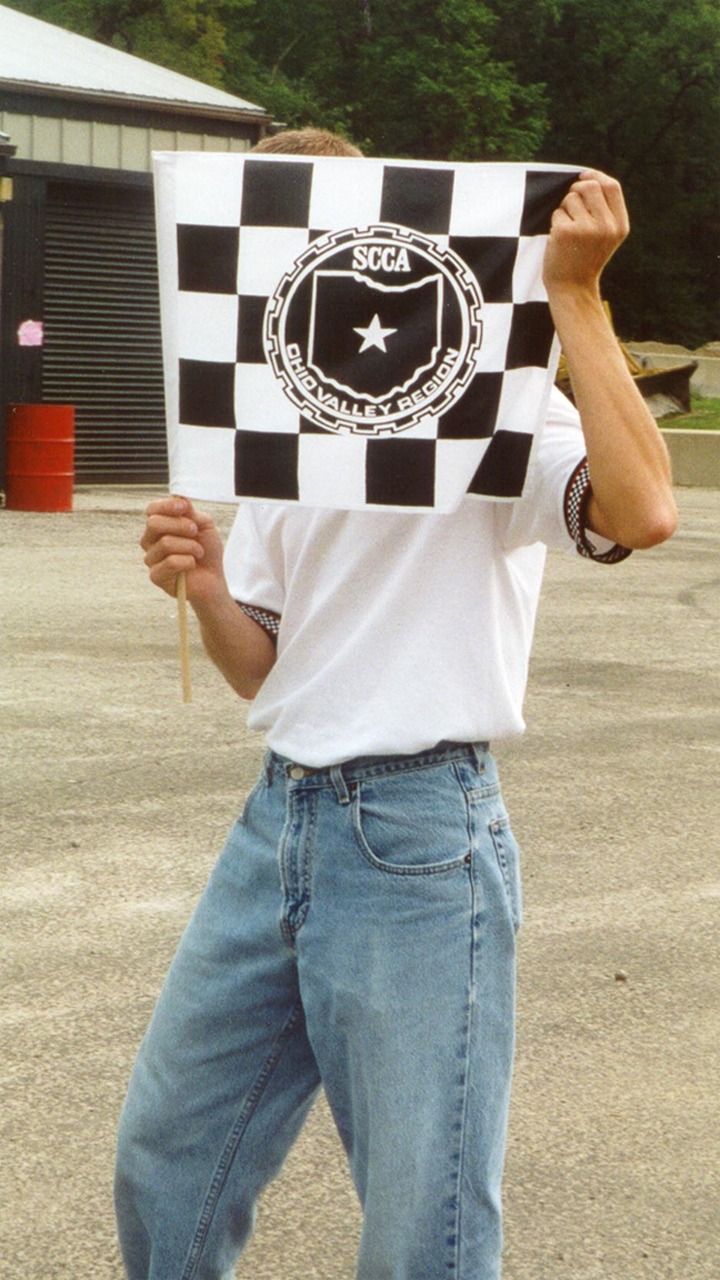 Much to our surprise, when we rounded turn 1 for the second time there were cars, tires, and emergency vehicles everywhere. Apparently, two Hondas had come together on the first lap, making a mess of the tire wall – not to mention their cars. Thankfully, both drivers walked away, but the pace car pulled the field back into pit lane to sit and wait until the carnage was cleared. We pulled in right behind the #6 car, hoping that we filled his mirrors even at rest.

On the restart we again lost the drag race to turn 1, but managed to firmly hold on to the second-place position. For the remaining five laps we stayed on top of the #6 car, twice pulling up alongside him in turn 1, but never having the top-end to make it stick. To make things interesting, the #11 car remained on our tail for the entire session, requiring our #34 to make more than one defensive move in turn 6. With less than 1 second separating us, we crossed the finish line in the same order we had started – #6, #34, #11 – but we had made our statement. We would be starting on the outside pole in Sunday’s main event, and we knew where to make our moves. Needless to say, the first round that evening was on the team’s budget…

At least our tire choice for Sunday morning was easy. The rains had been falling all night long and didn’t look like they were going to stop any time soon. Consequently, the top four cars on the grid were wearing their finest Hoosier Dirt Stockers as the one-minute warning was given. Let’s go play in the rain!

The start of Sunday’s race was a carbon-copy of Saturday’s. We tucked in behind the #6 car into turn 1 and ran inches away up and into turn 5. This is when things began to suck.

Entering turn 5, the #6 car began to spin. While we were still in complete control, there was nowhere to go left or right, so we were forced to lift off the throttle and watch. We waited until the #6 car pitched right, so we dove to the left…until the car snapped back to the left. Deciding between hitting the car and running onto the grass was an easy decision, but in the process three cars sped by on the right and continued barely unchecked by the spin. We gathered up the car and headed back down the track in 5th
place. Damn! 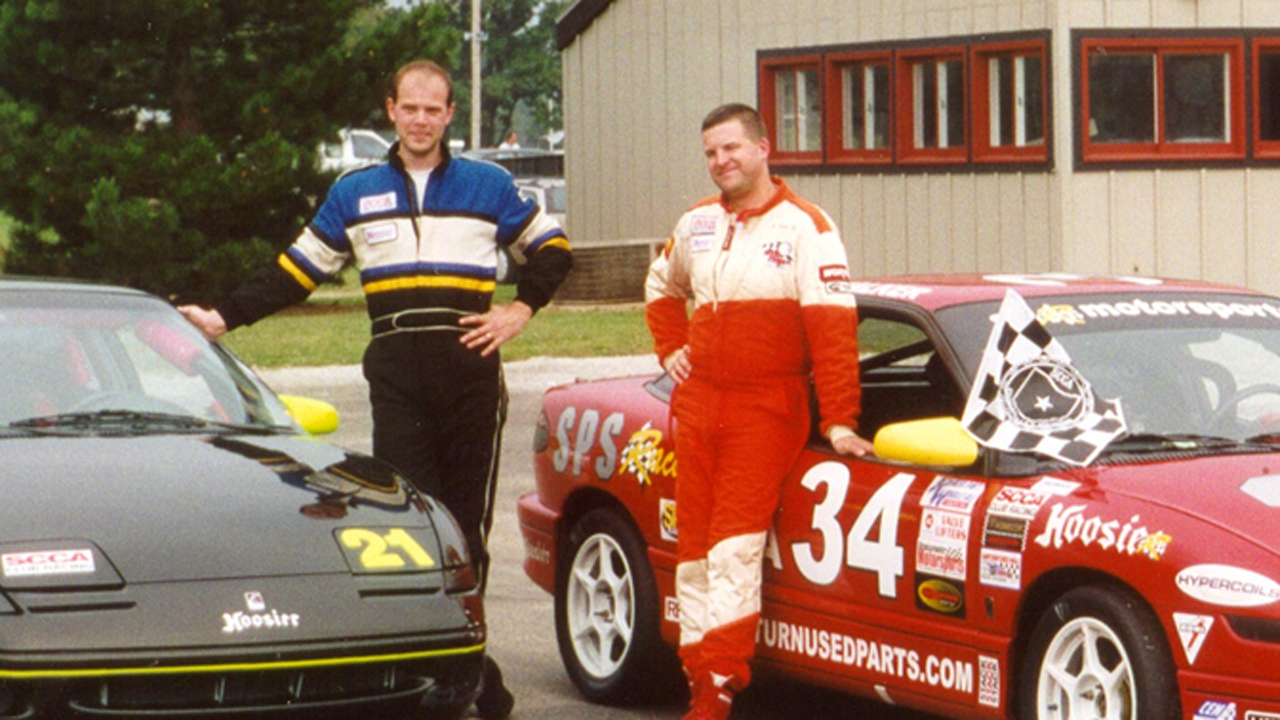 Words can’t express the excitement of the following 17 laps, but in summary we eventually worked our way back to the second position…along the way falling from third to fourth to third to fourth and so on. During one such dice we attempted a pass on the #11 car on the inside of turn 5, but came together with him at the exit (he tightened his line as we pushed out), both cars wiggling, pausing, and running away as if nothing happened. Passing under braking, passing under power, passing through lapped traffic – we didn’t have a moment to rest.

With one lap to go, the #6 car passed us under power on the back straight, stripping away the second-place position. We both charged up on the #11 car (now leading the race) as we ran into the final three turns, everyone looking for the win. Ultimately, we could not make a move and finished 0.8 seconds behind the second place #6 car, 0.3 seconds behind the race-winning #11. Not too bad for a non-Honda, eh?

At this point, we are gearing up and preparing for the Championship at Road Atlanta in November. With six weeks to play with the car in between, there will be plenty of opportunity to tune, tweak, and adjust, but with the car running as well as it is, we’ll probably just leave it alone. Fresh tires, brake pads, and wheel bearings are already on the agenda, but you can bet we will be looking for that last hundredth of a second with every wrench we turn. While our primary motivation for running the ARRC is for the experience itself, our recent successes have us hoping for more. Somebody has to dethrone the Hondas…why not a Saturn?

See you in November!