The National Points have been tallied.  The entry forms have been mailed.  The hotel reservations have been finalized.  The crew members have been recruited.  It’s official – we’re heading to the RunOffs…

Heading to Mosport over the Labour Day (that’s how they spell it in Canada) weekend would serve as team scR’s trial by fire – a podium finish (top 3) at Mosport was required to secure an invitation to the Runoffs!  A fourth-place finish would not suffice.  In addition, we were joined by JKT Racing for the weekend.  For John and his crew, this would be their first ever F500 National race.  Needless to say, there was a little bit of apprehension around the paddock area for both teams all weekend long, as witnessed by this overheard conversation:

John: “I think we might have to loosen our clutch belt for qualifying.”

James: “Now, should we adjust pressures for the cooler weather today?”

Curtis: “What is the torque spec for these head bolts?”

Dana: “Can we drive in to Toronto to do some shopping tonight?”

Getting to the track at 10:00PM allow both teams to share in the joy of setting up camp in complete darkness.  Talk about a bonding experience.  A normally 30-minute operation (setting up the canopy) quickly consumed the better part of an hour.  Vehicle preparation for the next morning was abandoned due to the complete lack of light, but the real disappointment came when we could not even get in a track walk – and neither John nor I had ever been to Mosport before.  Practice would be interesting! 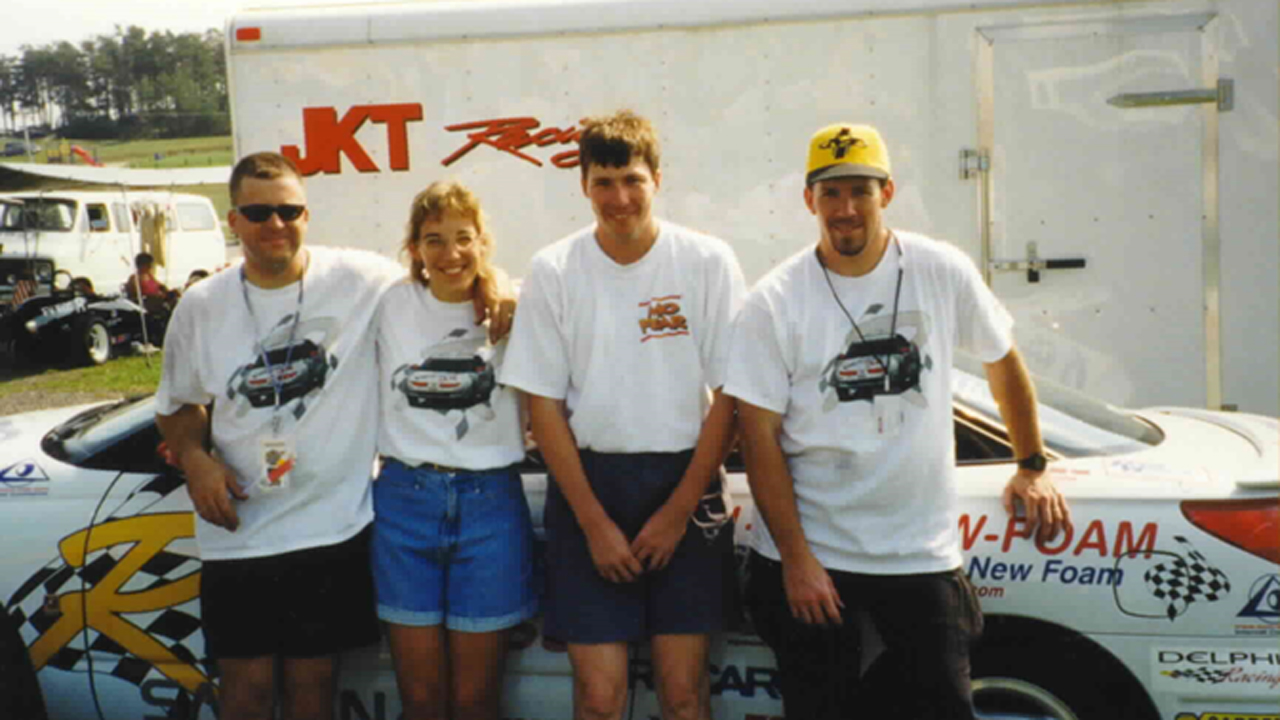 Traveler’s tip #1:  when arriving in Oshawa, Canada, please be sure to eat dinner before 8:00 PM.

Driving around for dinner, we quickly discovered that – unless we stopped at the Donut Diner – there was NOTHING open.  Zero.  We thought we had found salvation when, in a dimly lit strip mall, there was a ‘Pizza Pizza’.  Looked like a decent place, and we figured it would beat apple fritters (actually, I wanted donuts, but was outvoted).  We ordered our pizza and waited for the bill.  Curtis blew the poor clerk’s mind when he asked for a 20-ounce Pepsi – we had to convert it to milliliters for him.

Traveler’s tip #2:  when arriving in Oshawa, Canada, please be sure to exchange all currency at the border.

The total bill for dinner came to about $25 Canadian.  Based on the prevailing US/CD exchange rate of 40%, we figured the total would be about $15 US.  Wrong.  Apparently, there is a long standing ‘Pizza Pizza’ policy of a 10% US/CD exchange rate.  Although John argued with the clerk for the better part of 5 minutes, all was in vain.  We paid the $22 US and ate our pizza in silence.  It wasn’t even that good.  In fact, it sucked.

After dinner we came to the conclusion that there was only 1 alternative to display our displeasure:  The US would have to invade Canada and turn it into a parking lot.  With just four of us in the car, however, we decided this would require way too much effort.  We headed back to the hotel and set the alarms for early Saturday morning.

Saturday was a picture-perfect day for a race.  Luckily, it was also a great day to qualify, since the race was on Sunday.  We arrived at the track early, prepped the car, and at 9:00 found our way to the false grid.  On our way up we counted 6 other SSC cars on the grid, and a total of 16 cars in our group.  Nice sizing, since we were looking for a top 3 finish.

Mosport is a 2.5-mile (that’s 4.0 km, eh) road course just east of Toronto.  After 1 lap in practice, all I could think was YYYYAAAAAAHHHHHOOOOOOOOO! 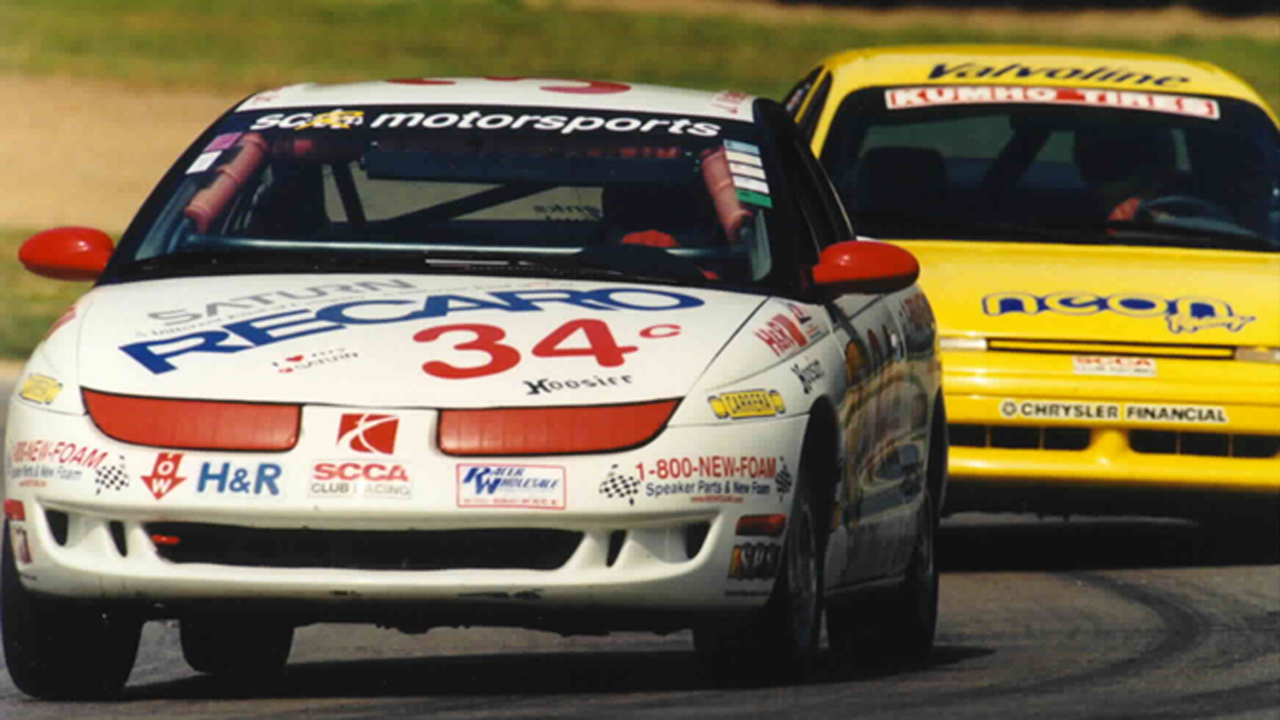 Practice times of 1:50’s (on brand new tires) sure felt fast, but the quick SSC Nissans were running high 1:47’s (what’s that in the metric system…?).  Of course, these times were being set by the current NEDIV SSC points leader who had run the track several times before.  Nonetheless, we needed to shave some time off – NOW – in order to try to run with the fast guys (and gals, as the case might be).  For what it was worth, the car was flawless – the brakes were solid, the motor seemed healthy, and the chassis was keeping everything under control.  The afternoon session was going to be fun.

For qualifying, we installed some pretty used up tires to save the new tires for the race Sunday.  We found a good bit of traffic to draft and chase for most of the session and kept on going faster and faster.  Our official best turned out to be a 1:48.2 – 2 seconds faster than our morning practice session, but still not quite up to the Nissan’s 1:47.6.  We would be starting from 4th on the SSC grid, directly behind two Nissans and a Neon.  Again, the car ran without incident.  It was a pleasant change to prep the race car for the race at a leisurely pace.

Sunday morning brought more textbook perfect racing weather – clear, sunny, and 65° F (that’s 18.3° C, eh).  We chose not to partake in the open practice session that morning, and instead mentally prepared for the challenge ahead.  Based on the lap times of our competitors, it seemed critical that we get a great start and try to run away from the rest of the pack.

When the green flag flew at 10:00, everything went as planned.  We were HARD on the gas coming into turn 10 and never looked back at the Neon next to us who had qualified 3rd.  By turn 1 we had 3 car lengths on the Neon and were handily in 3rd place right behind the two Nissans.

Going into turn 5, an SSB car who had qualified behind us nosed in on the inside and passed us.  Unfortunately, the Neon in 4th tucked in and left us out to dry.  Damn!

Running down the following straight, we tucked in behind the Neon and slowly caught him in the draft.  A frenzied horde of 4 other Neons loomed behind, but we only focused on the cars in front.  Going into turn 8 at the end of the straight, we drafted right by the Neon and passed him on the inside.  We would not be bothered by him again for the rest of the race. 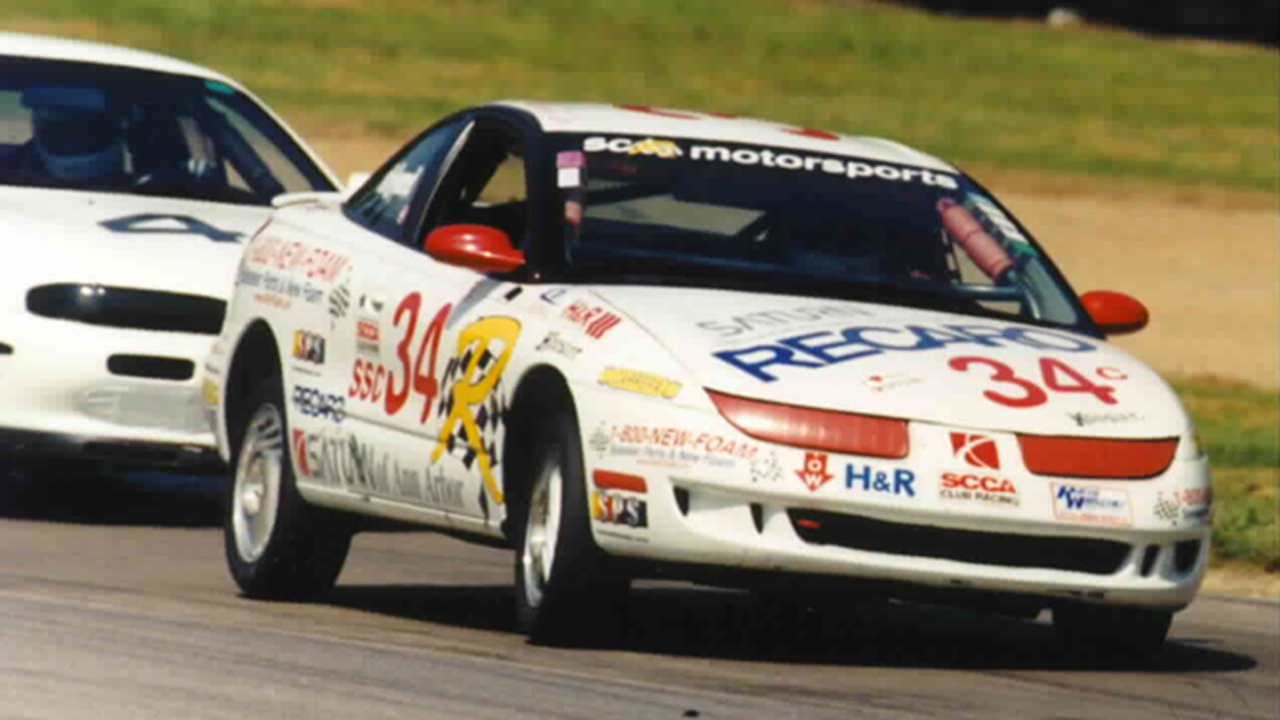 The Nissan chase had begun.  By the middle of lap 2, we had caught up to within 1 car length of the pair of Nissans battling for 1st place.  We tucked in behind and followed them through turns 2 and 3.  Coming out of 3 our little train caught an SSB Miata – fast.  The Miata was in his mirrors, though, and let by the two Nissans without missing a beat.  We, however, were not as fortunate.

It took us 2 more turns to get by the Miata which opened up a 3 second gap between team scR and the Nissans.  The Miata almost made it back up by letting us go by going into turn 5 and pushing us – literally – down the back straight.  Although we gained 4 MPH that lap, it was not quite enough to close the gap to the Nissans completely.

For the next 14 laps we chased the Nissan train.  They had a definite advantage drafting each other up the back straight, but we consistently caught right back up through turns 1-5.  They had the horsepower, we had the chassis.  Unfortunately, we did not have quite enough chassis to overcome the horsepower difference.

And that, ladies and gentlemen, is how the checkered flag fell.  At the finish we were 3 seconds behind the winning Nissan and 2.7 seconds out of 2nd place.  A glance at the final results sheet showed that we had managed to run a bunch of high 1:47’s, with a best of a 1:47.6 – and the Nissans running 1:47.5’s.  It could not have been much closer.

So, with 7 National points in our back pocket we packed up the race car and began to make plans for the Runoffs.  We did what we had to do and set off for home satisfied – and in 9th place in our Division. 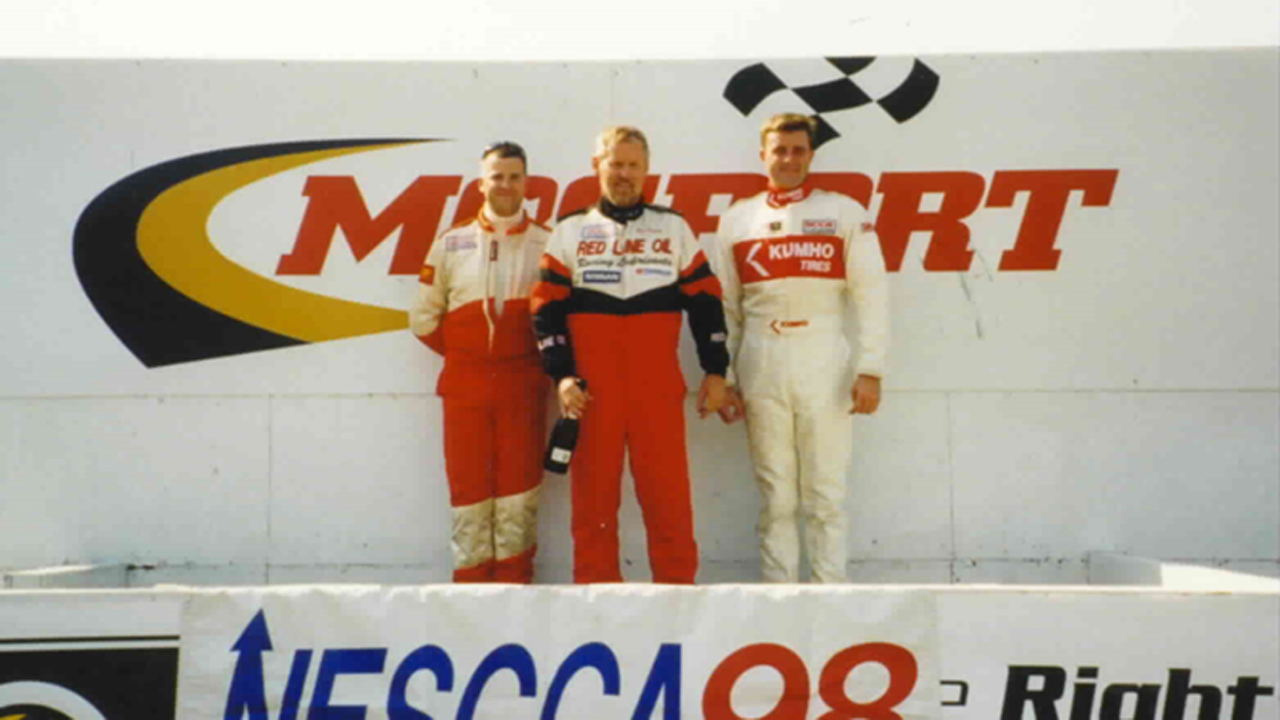 Now, all that is left is the National Championship in October.  Since the car ran so well at Mosport, no work is planned outside the regular basic maintenance.  We know that we will have our work cut out for us, but with as far as we have come already this year, we know that the team will be up to the task.  See you at Mid-Ohio on the 10th!